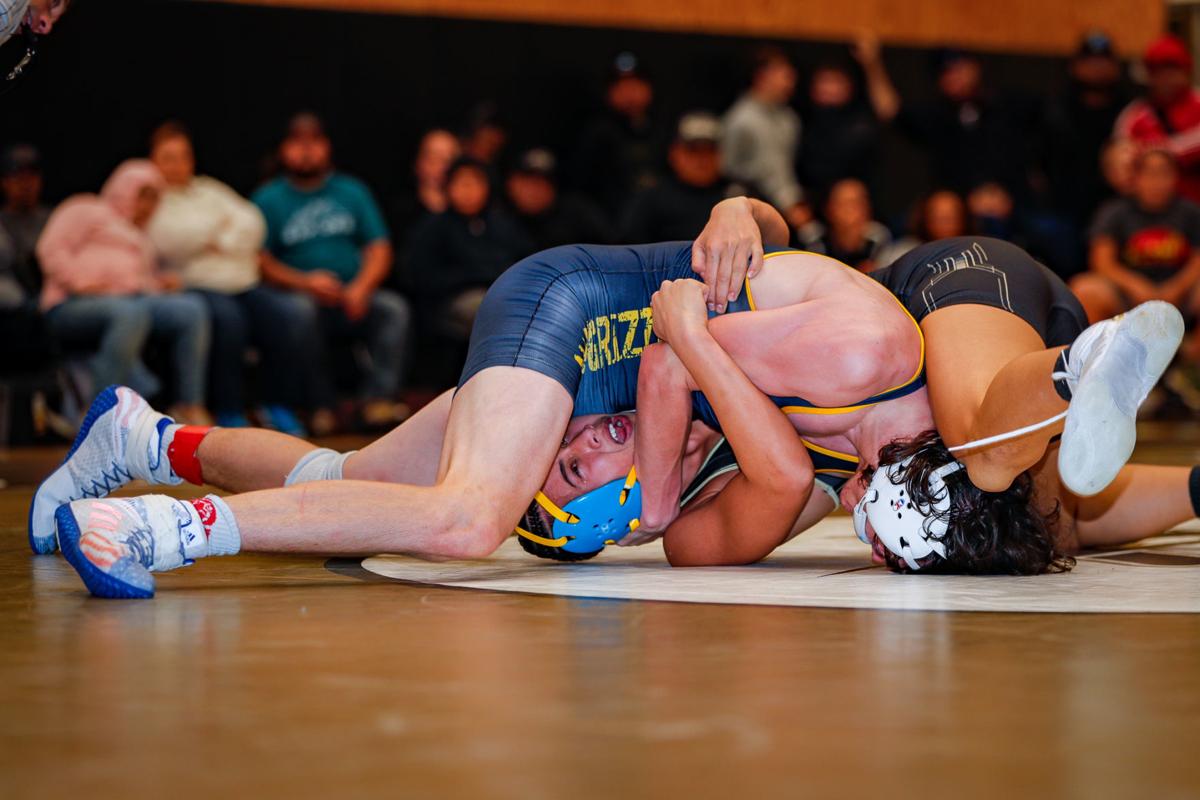 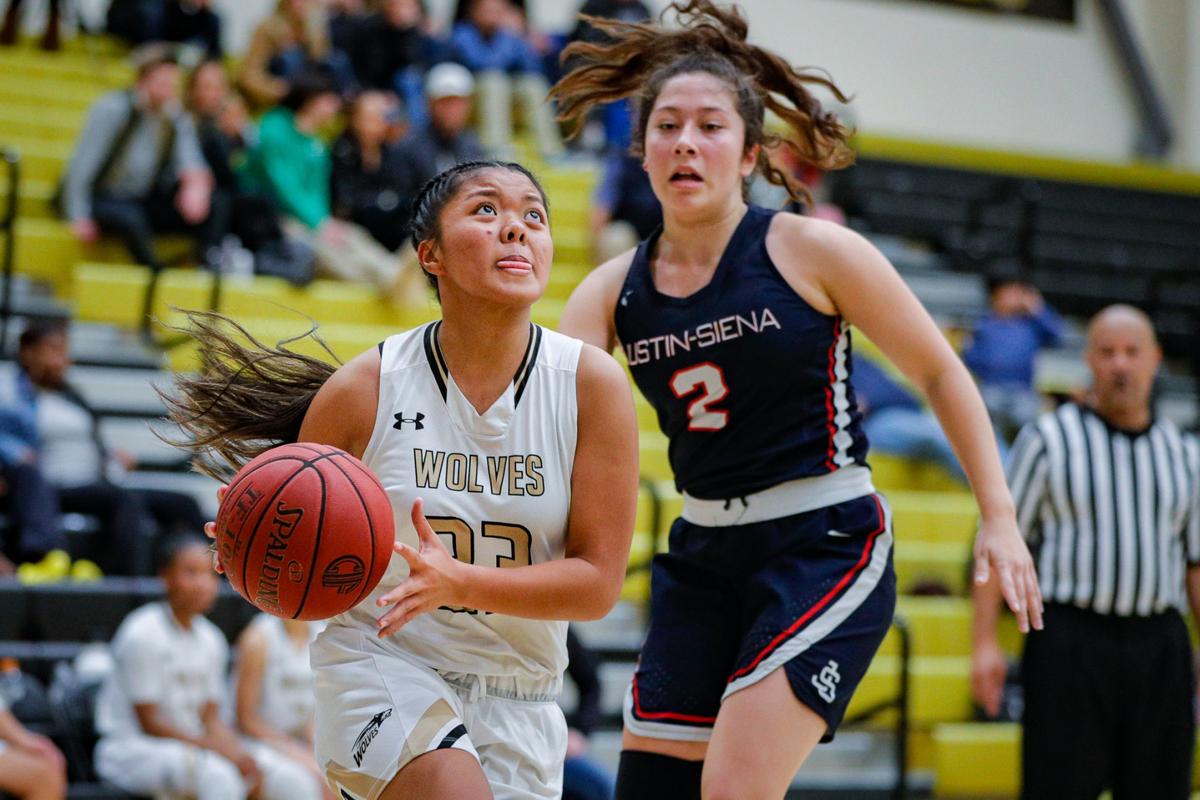 American Canyon's Jazmine Fontilla (23) drives to the hole and gets fouled by Justin-Siena's Charmaine Griffin on Thursday night.

American Canyon's Jazmine Fontilla (23) drives to the hole and gets fouled by Justin-Siena's Charmaine Griffin on Thursday night.

The meet started at 126 pounds, which was picked out of a hat, and Benito Saldivar pinned Elijah Beronilla in 38 seconds.

Devin Garingarao (134) cut American Canyon’s deficit to 6-3 with a 5-4 decision over Alex Briseno. But Napa’s Manuel Infante (140) made it 9-3 with an 8-2 decision over Christian Gomez. The Grizzlies started to pull away with a second-period pin by Robert Gomez (147) over Matt Ruiz, a 10-6 decision by Justin Barnes (154) over Jonathan Su, and an 8-7 thriller by Nathan Schwarze (162) over Justin Del Rosario.

Jesse Lopez (172) got the Wolves some more points with a second-period pinning of Rudy Hernandez. But Napa’s Gunnar Reger (184) beat Kyle Racel 8-3 and the Grizzlies’ Thomas Hatton pinned Jair Ramos in the third period to make it 31-15.

American Canyon’s James Aken (222) pinned Marco Saldivar in the second period to make it 31-21. But the Grizzlies’ Cole Lex (287) pinned Toby Bunch in 22 seconds. The Wolves’ Mekhai Sta Rosa (108) got a forfeit win and Roman Gamboa (115) won 12-1 over Jose Alvarez to make it 31-31. But Zakary Raymond pinned Stephania Barrientos in the first period to seal the win.

“The Manibusans and I go way back to our wrestling days and so it’s always fun to wrestle each other and they always have a good team,” Napa head coach Nacho Franco said of Wolves head coach Rick Manibusan and assistant coach Tom Manibusan, his brother. “They always come out to wrestle and have fun.

“Our boys stepped up tonight. We squeezed in like four new kids into the mix to see if they could get us a couple W’s but all the veterans we have did a great job. It was a big night for Justin Barnes and Gunnar Reger. I was proud of them. They wrestled great matches. We lost a tough one with Rudy. He was off for a week with a nasty flu, and Benito’s been gone for 10 days; I literally just picked him up on the way here. He’d lost like 6-7 pounds catching that nasty flu, but he did a great job and was the first one of the night. We can always count on him as a team captain. His quick pin kinda set the tone, but I was surprised he was able to make it.”

Rick Manibusan was pleased to see his young squad wrestle so well.

“Napa is very good, and we weren’t expecting to do what we were supposed to do today. It was a shock that we had a young team that actually performed very well,” he said. “Our team is very young and we have to rely on our upperclassmen. Unfortunately, some of them were going against Napa’s studs.”

Behind two 3-pointers from Lexi Rosenbrand. the visiting Braves (5-8) scored the game’s first seven points and led 8-5, 19-9 and 26-19 between quarters en route to the victory Thursday night in each team’s VVAL opener.

The Wolves (7-8) continually closed the gap to 6 or 4 points in the second half, but were unable to get any closer.

“Any time you can get a win in league it’s a good win, especially when it comes on the road,” Justin-Siena head coach Andy Bettencourt said. “We did a good job of attacking their pressure and our rebounding on both ends of the floor was key. We still have a way to go, but our kids are fighting every day to get better and we are excited to see the results as we go forward.”

The Braves face Piedmont at Cardinal Newman at 4:30 p.m. Saturday in the 2020 Girls Ball Too Showcase.

The Wolves won on the road Thursday against their former Solano County Athletic Conference rival, leading by as much as 20 points in the third quarter. Benicia closed the gap to 6 with four minutes to play, but American Canyon held on to wrap up a 4-6 preseason.

Gabriel Patrick had a game-high 22 points and Oliver Aandahl added 20 for the Wolves.

“It always feels good to win a game, especially a rival in their building,” American Canyon head coach Scott Hayburn said. “We’re still looking for consistency in our execution, and tonight was a good start.”

The Wolves were to host Justin-Siena in their VVAL opener on Friday night.