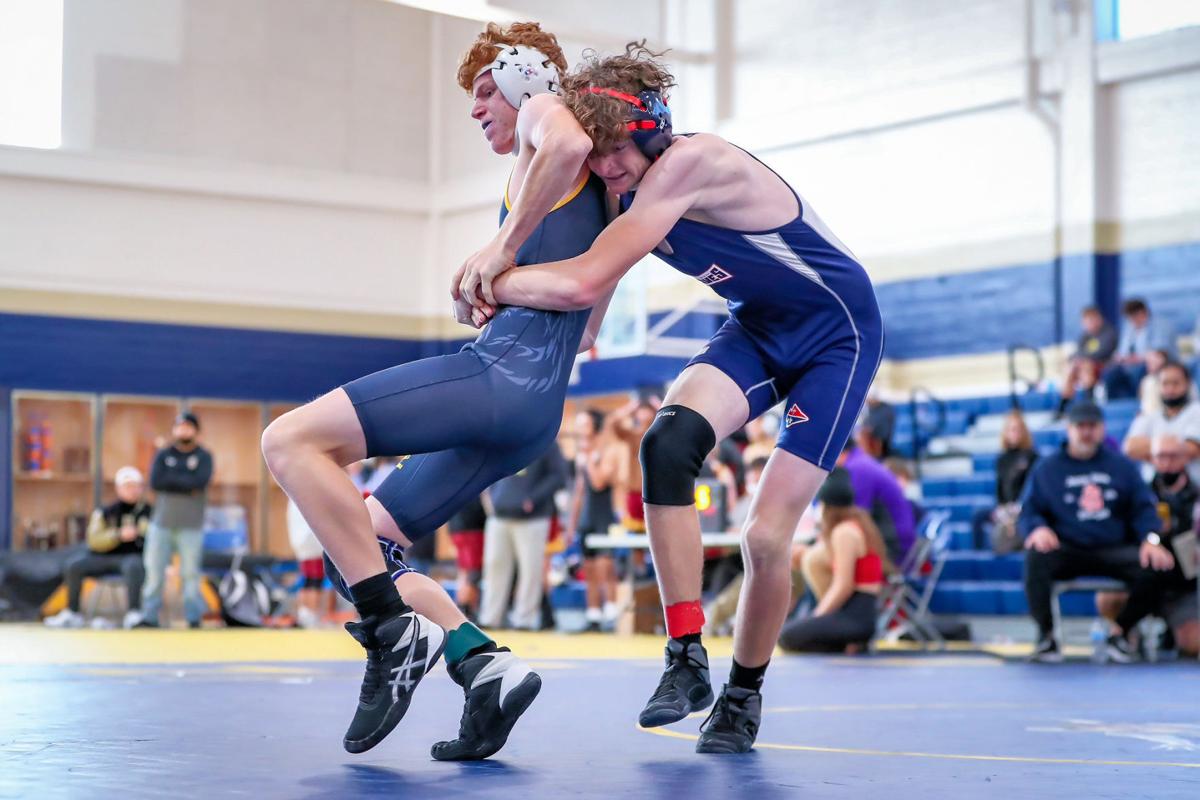 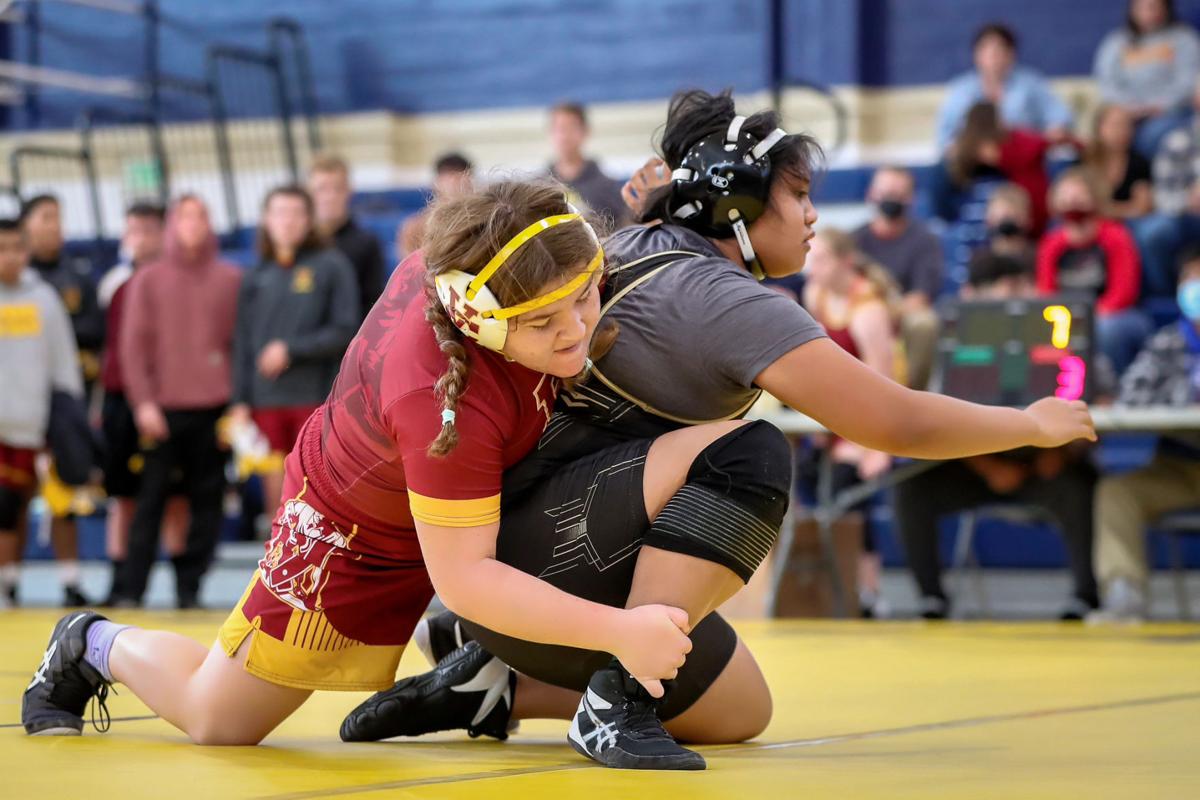 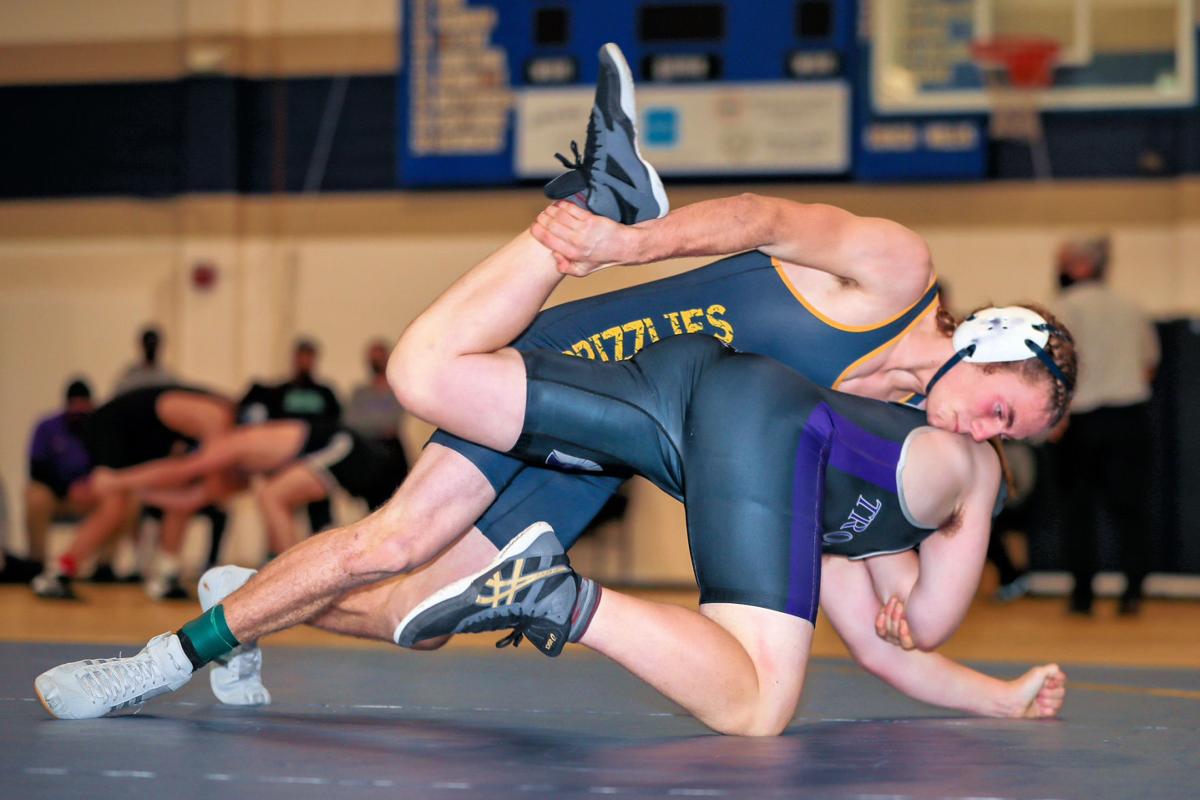 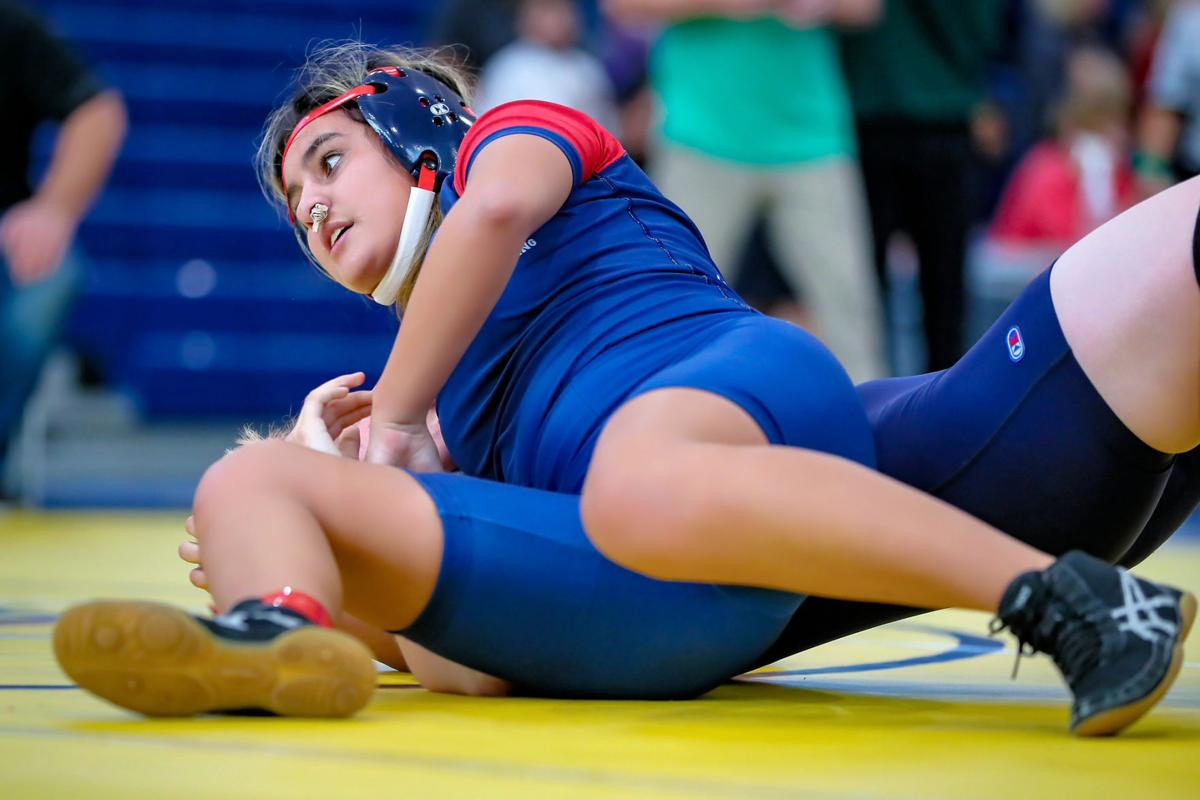 Justin-Siena's Joselyne Cervantes-Robledo holds on for a pin Saturday at Napa High. 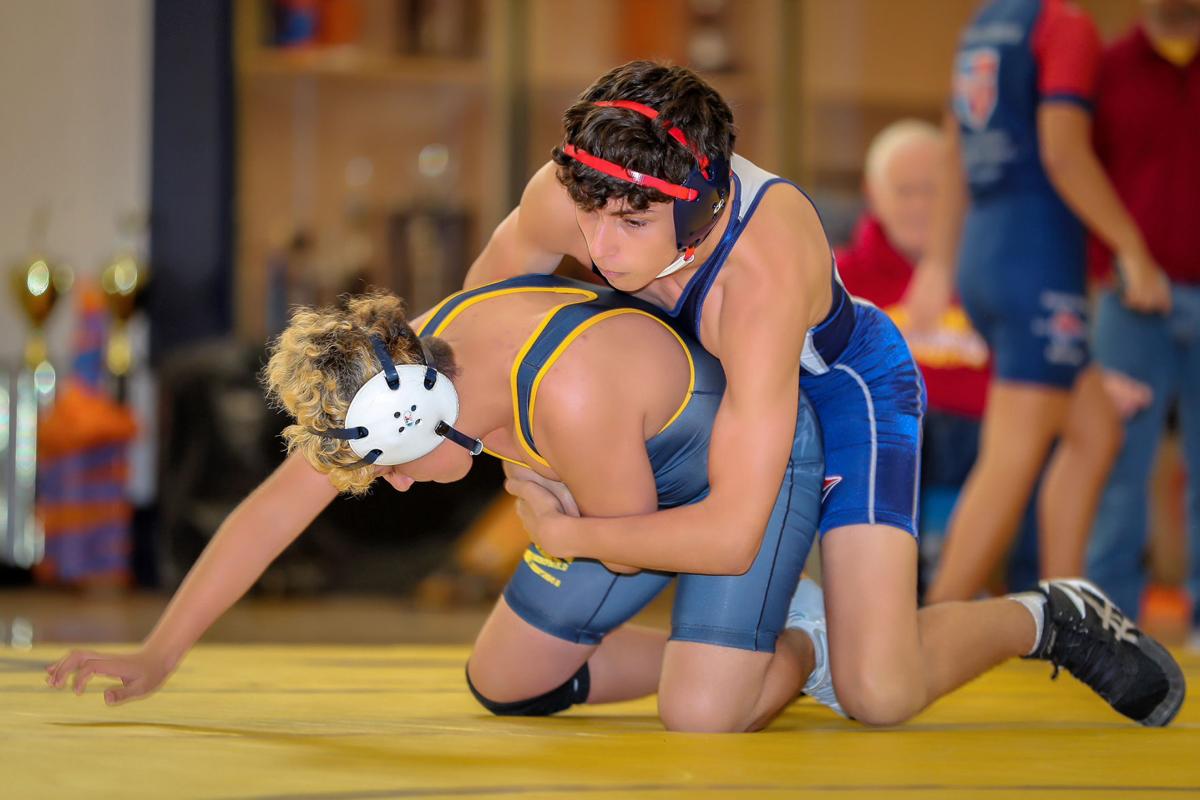 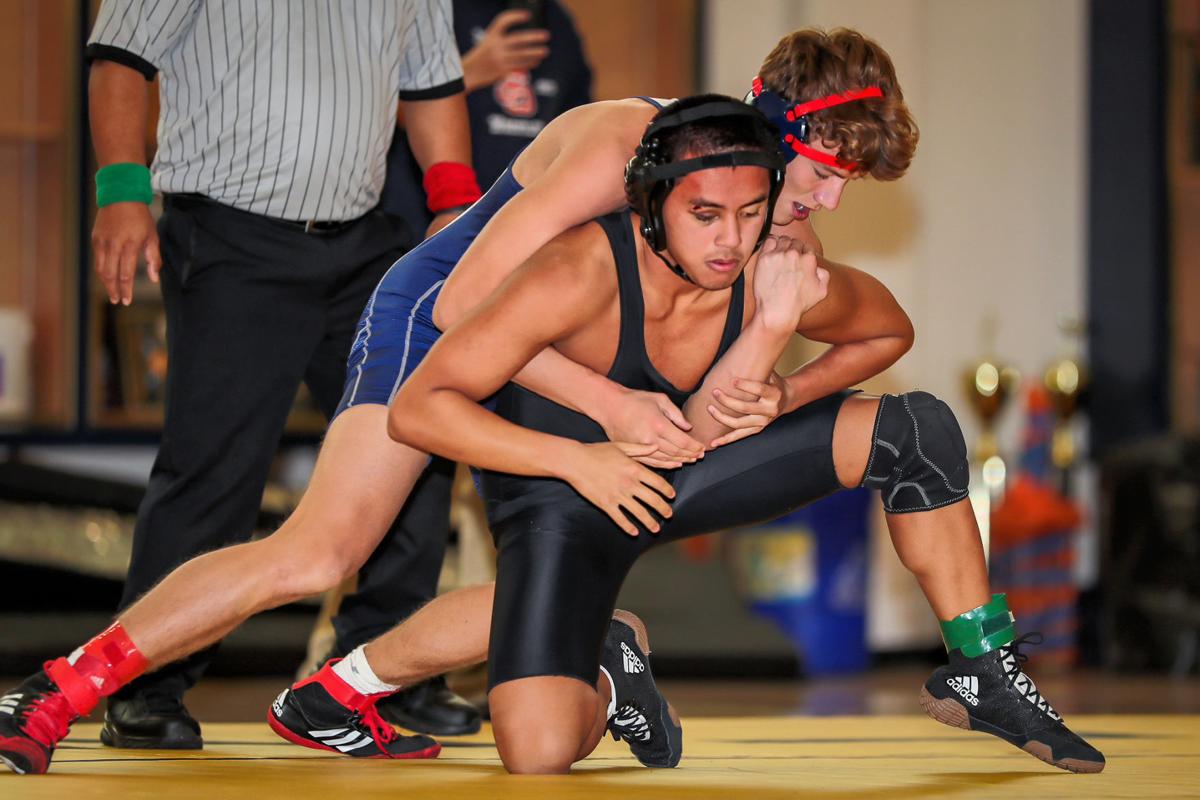 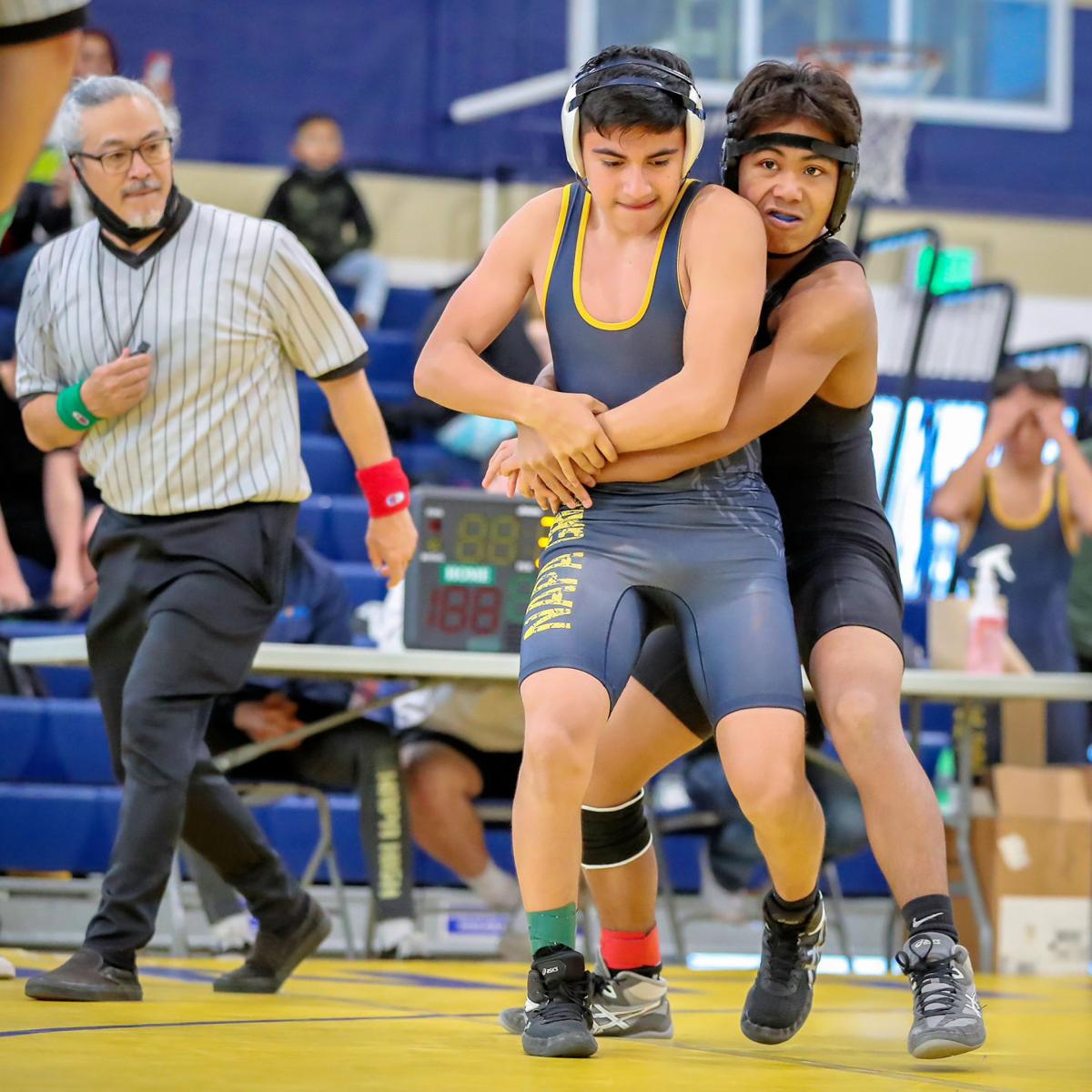 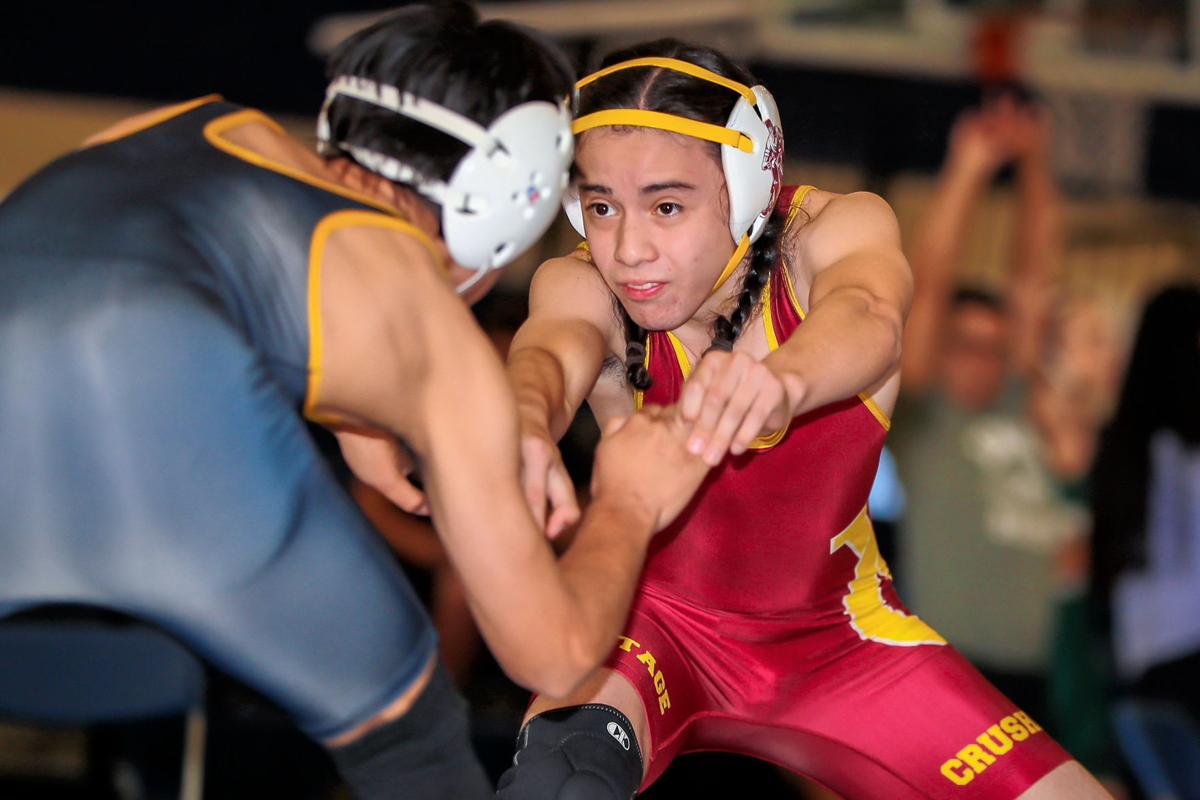 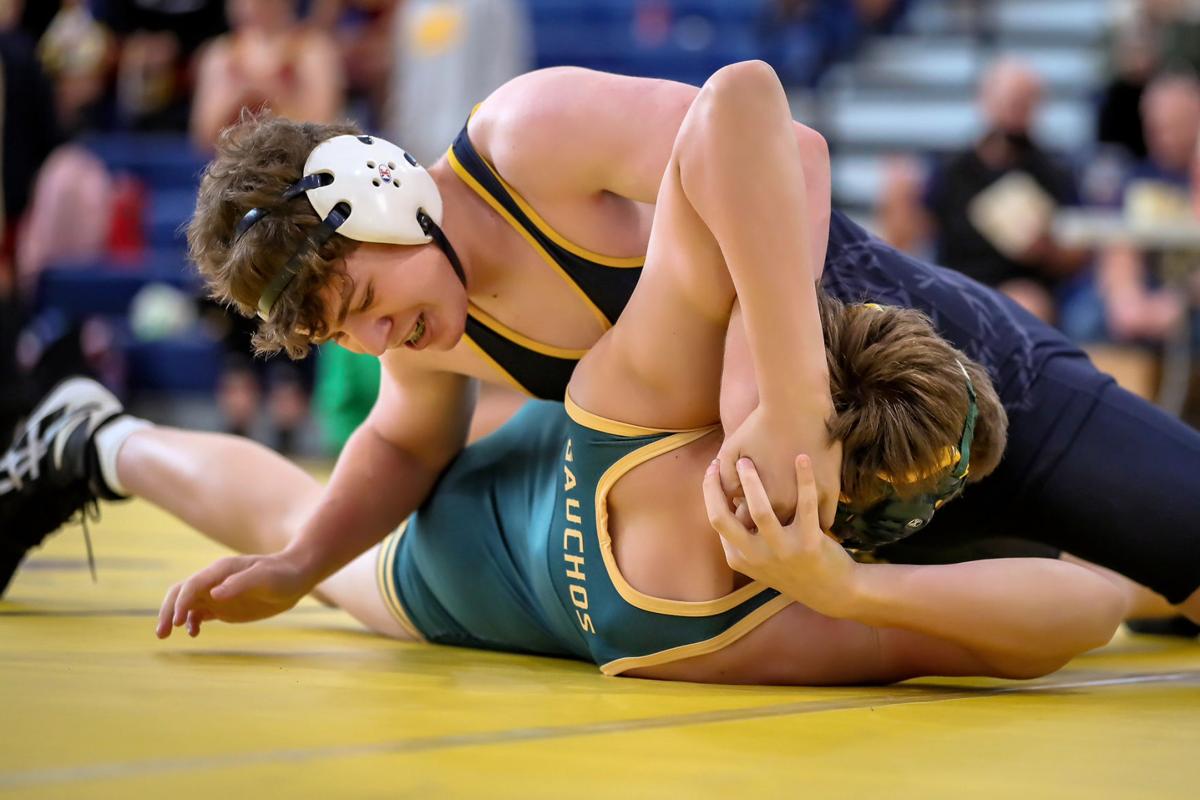 Napa High's Jacob Degraw, top, tries to roll a Casa Grande wrestle onto his back for a pin Saturday. 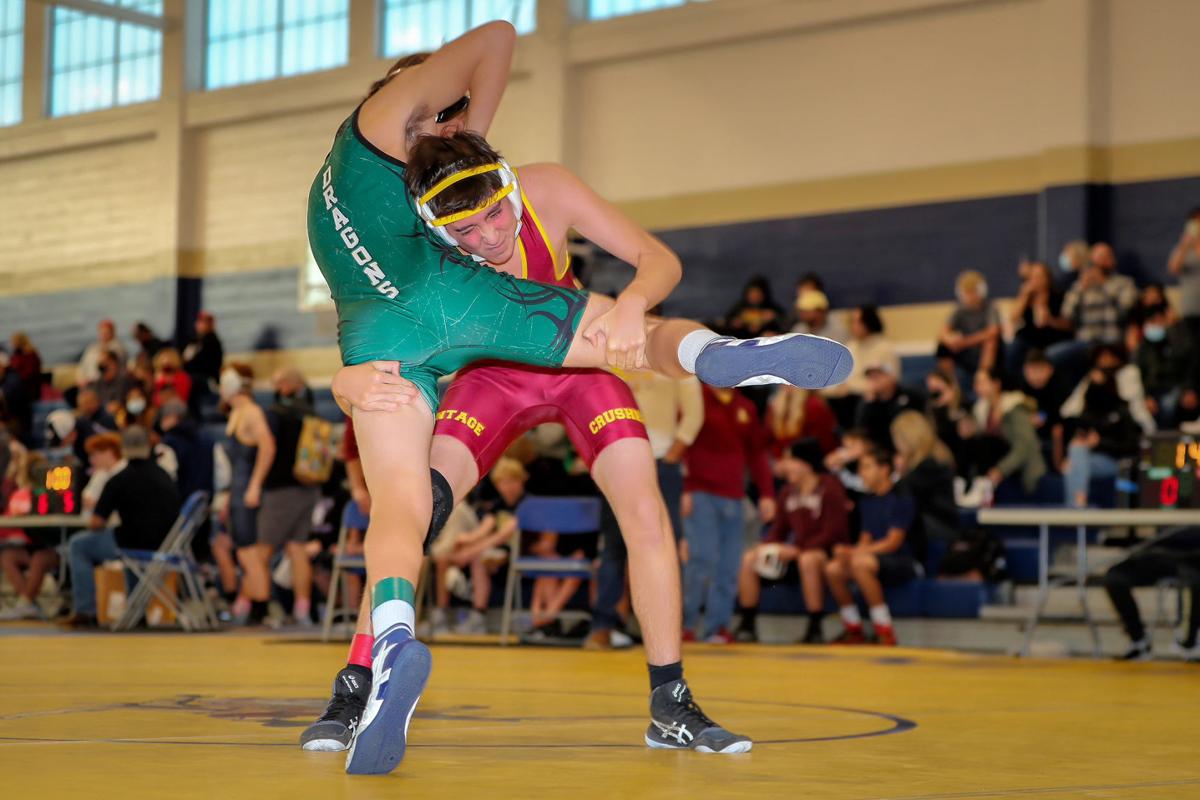 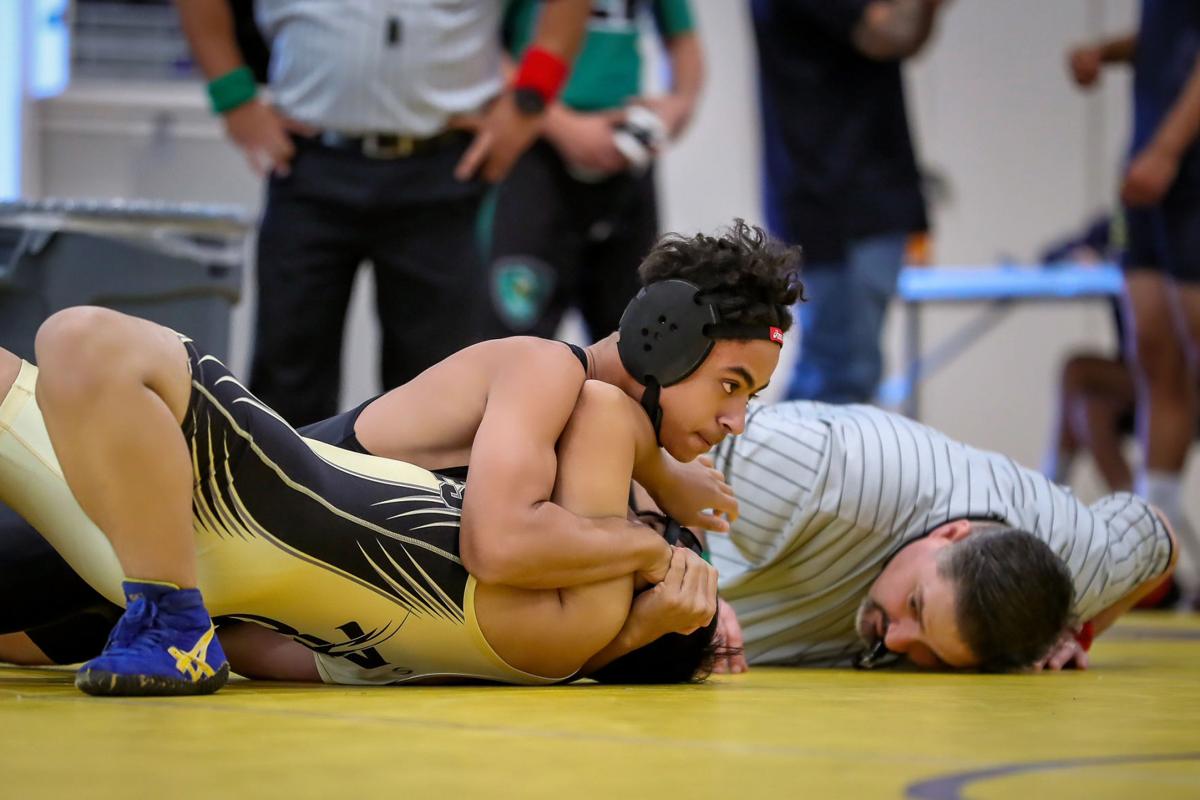 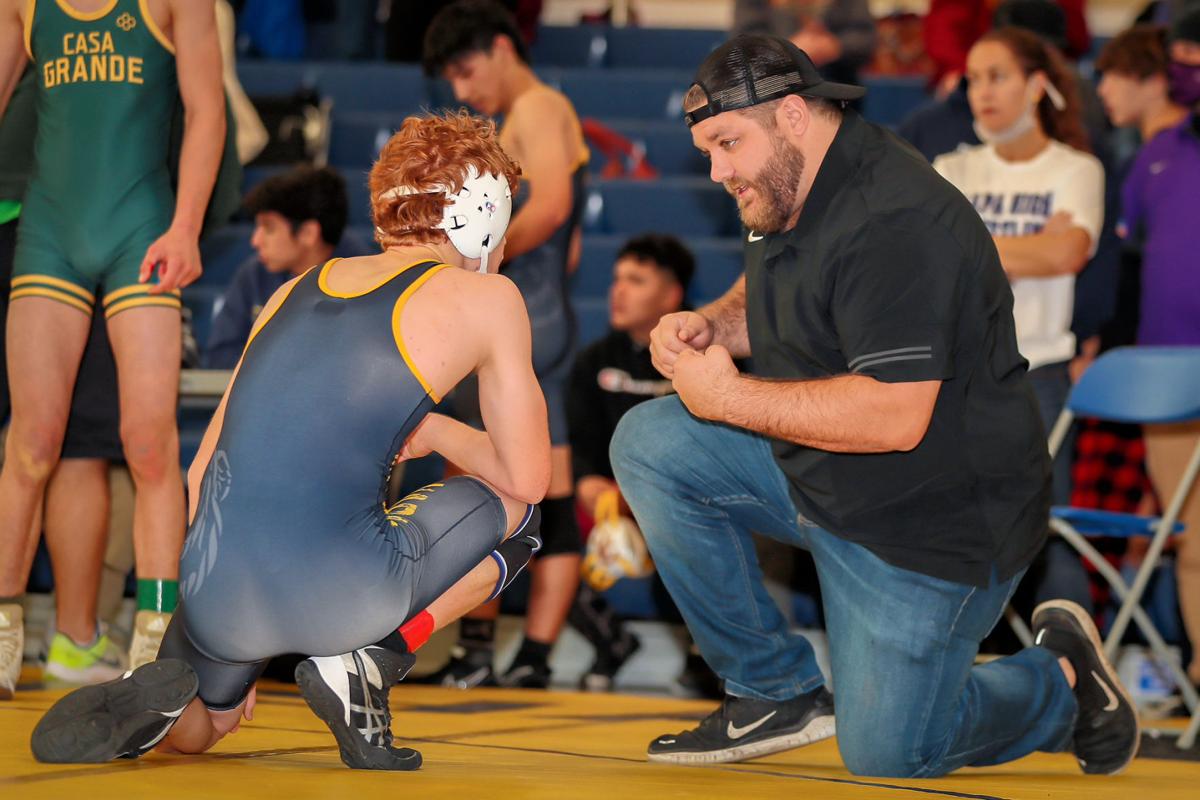 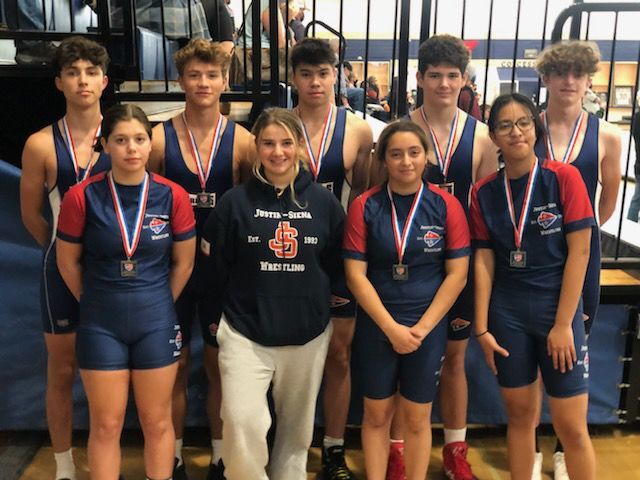 Wrestling in the Napa Valley got under way Saturday with the Vine Valley Athletic League Novice Meet at Napa High, where the Grizzlies came away with five champions on their home floor.

American Canyon had four champions, Vintage two and Justin-Siena one.

For Napa High, Eunice Cruz and Jessye Wood took first place for the girls and Chris Gaxiola, Josiah Orozco and Mohammed Steyteyieh finished for the boys.

“We had an amazing day and had 10 out of 19 wrestlers in the top three,” said Nacho Franco, who is in his 25th season as Napa High’s head coach.

Vintage’s champions were junior Victor Avila, who went 3-0, and sophomore Carson DeGarmo, who was 2-0 on the day. Going 2-1 were sophomore Jack Maurer and freshmen Elysiana Medina and Lily Miller, while freshmen Jacob Slay, Pedro Ramirez, Jaden Ellis and Hannah Johnson were each 1-2. Going 1-1 were sophomore Gianna Ficele and freshman Gustavo Mosqueda.

“The kids were very physical and stayed in for most of the matches,” Braves co-coach Jesse Ward said. “There were a few mistakes on the mat, but those are learning opportunities. Most have only wrestled for three weeks. They all support each other on and off the mat. Seniors came to help coach and mentor. Looking forward to teaching these kids more technique and mental aspect of the sport.”

In a hard-fought, intense game, the Braves (3-0) prevailed over the visiting Mustangs (2-1).

Justin-Siena lead by two at the break, but the lead changed hands a number of times in the second half as each team had its moments and struggles in a defensive battle.

Four Napa Valley runners placed in the 40s to lead their teams at the North Coast Section Championships on Nov. 20 at Hayward High.

The highest finish was by Napa High senior Eric Aguilar, who placed 41st out of 139 runners in the Division 2 boys race with a time of 16:51.7 on the three-mile course. He was a minute and a half behind winner Daegan Cutter of Redwood.

The American Canyon boys placed 17th out of 20 teams in the Division 3 race, which was won by Campolindo with a 49 and individually by Caden Carney of Tamalpais (15:01.0).

Justin-Siena's Joselyne Cervantes-Robledo holds on for a pin Saturday at Napa High.

Napa High's Jacob Degraw, top, tries to roll a Casa Grande wrestle onto his back for a pin Saturday.