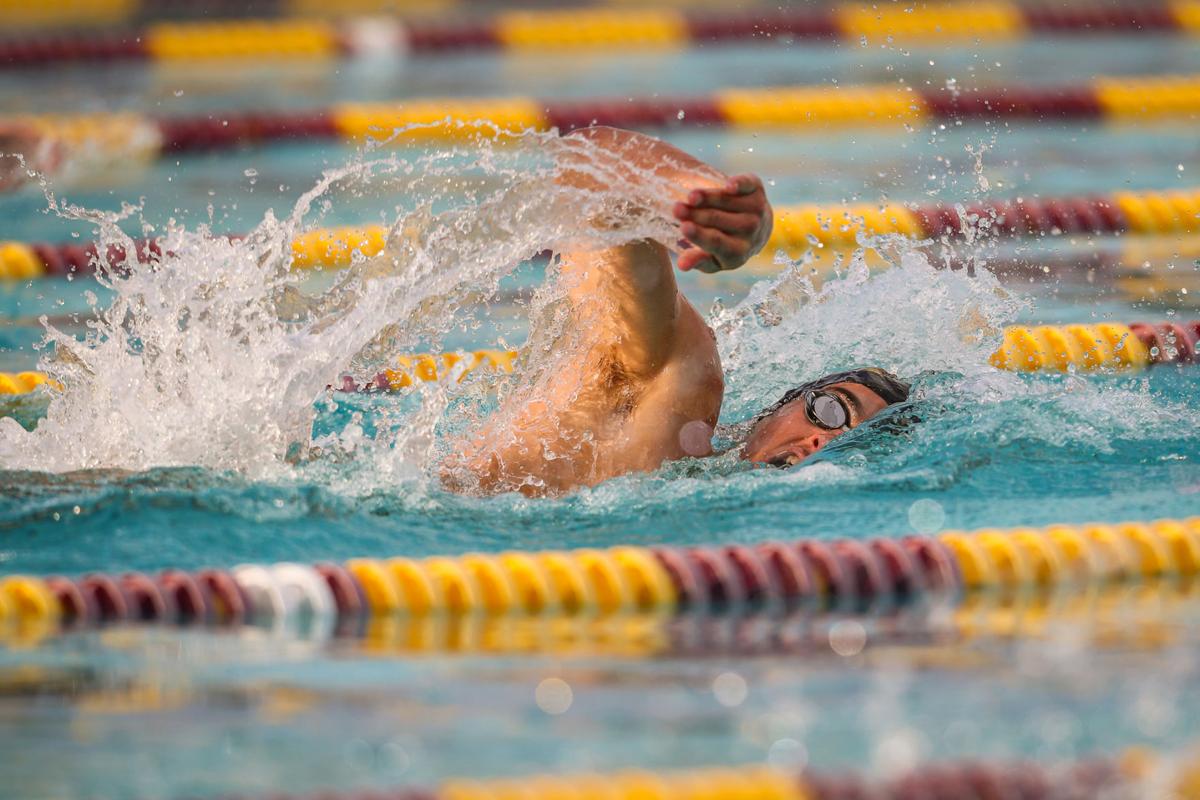 Vintage's Nico D'Angelo swims in the 400 freestyle relay against Justin-Siena on Wednesday. 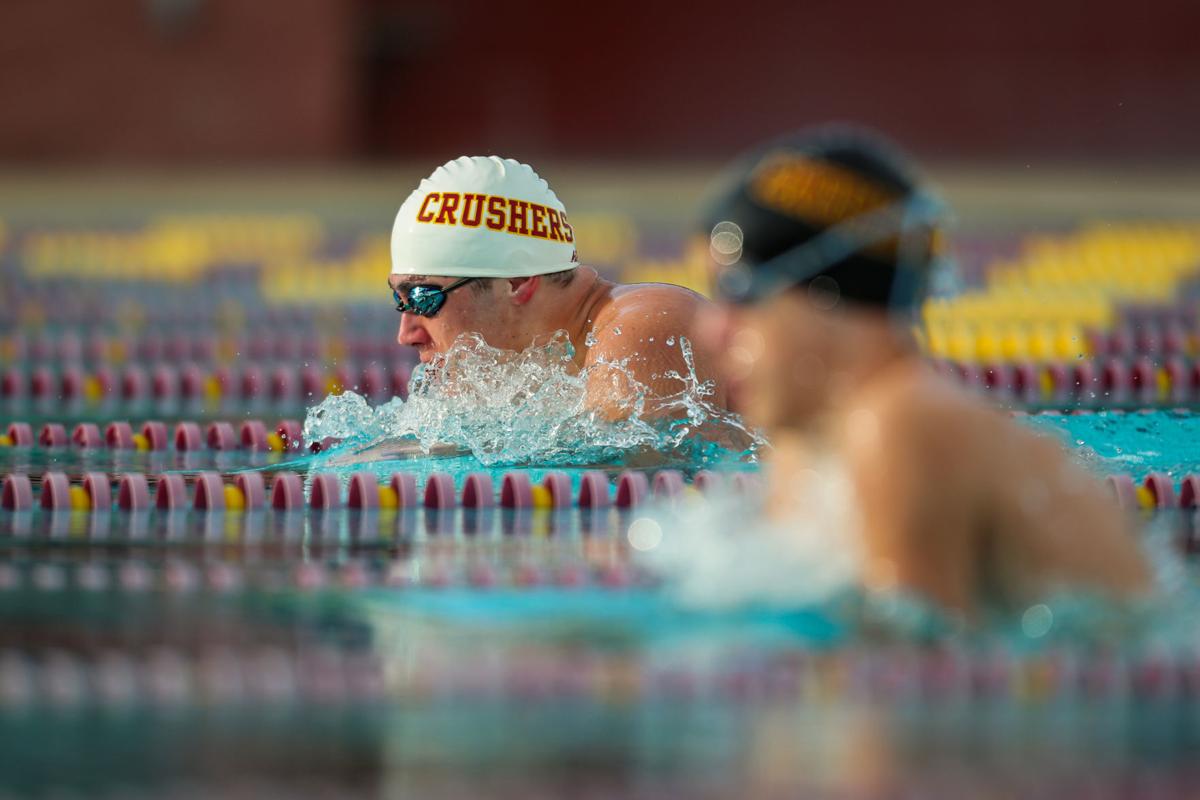 Vintage's Will Flint, left, and Matthew Larson finish the 100 breaststroke in 11099 and 11913, respectively, against Justin-Siena on Wednesday.

The Vintage High varsity boys swim team capped a 6-0 run to the Vine Valley Athletic League title Wednesday with a 139-26 win over Petaluma.

“Our undefeated boys team has been so much fun to work with,” Crushers head coach Sarah Tinloy said. “They are great at pushing themselves and encouraging each other. Multiple kids and all the relays would have made North Coast Section consideration times, taking swimmers from Vintage to the NCS meet for the first time. They deserve to be recognized for their hard work and dedication.”

“I am just so proud of these kids,” Tinloy said. “It was a short and sweet season. I am going to miss our 12 seniors. It was so hard to say goodbye to them. I wish we could have given them more, but I am excited for the years to come.

“These kids set the standard for sports this year. We were one of the first programs to be allowed to practice and compete, not to mention one of the largest teams with 70 athletes, and all kids adjusted and adapted to all the new and constantly changing policies. They were ready to return to some type of normalcy and, when finally allowed to do so, they gave us their all.

“These athletes made the most out of virtual meets, cheering each other on and trying their best even when there was no one to race.

“I wish that both the boys and girls would have a chance to prove themselves in a championship meet, but due to season overlap and policies, it’s not a possibility.”

Many of them will be playing water polo, which starts April 28 with home games against Justin-Siena.

The varsity boys swept the relays, with the team of Jackson Carmichael, Will Flint, Yuki Hayashi and Dominic Dandini winning the 200 medley relay in 1:50.10. The 200 freestyle relay went to Tyler Kortie, Dominic Dandini, Matthew Larsen and Nico D’Angelo in 1:35.95, and the 400 free relay was won by Hayashi, Larsen, Kortie and D’Angelo in 3:28.07.

For the varsity girls, Kira Tavakoli, Rachel Galvin, Emily Hayashi and Ava Anderson won the 400 free relay in 4:11.58. The 200 medley relay team of Hayashi, Anderson, Erynn Robinson and Galvin was second in 2:11.20. The 200 free relay squad of Sophia Menzel, Lea Skille, Alessia Grassi and Tavakoli was second in 2:00.95.

The Crushers opened defense of their VVAL title at home Thursday night.

Gabe Patrick had a game-high 19 points to lead the Wolves, while Raekwon Bell scored 12.

The Braves traveled to St. Helena for a nonleague season opener Wednesday and got hits from pitcher Clare Halsey (1 for 3, double) and shortstop Eleanor Meyers (1 for 3). Reagan Hinkle reached on a walk.

Shelby Morse and Raimy Gamsby combined to no-hit the Braves while their visiting Crushers scored six runs in the second, three in the third, two in the fourth and 11 in the fifth to win by the 10-run mercy rule on Thursday in each team’s VVAL opener. Morse struck out seven in three innings and Gamsby six in two frames.

The Saints opened their season at Cloverdale with a heartbreaker on Tuesday. Trailing 10-1 after four innings, St. Helena came back with seven runs in the fifth and six in the top of the seventh to go up 14-10 — only to give up five in the bottom half.

The pitchers combined to give up 15 hits, 14 earned runs and eight walks while striking out seven.

Vintage's Nico D'Angelo swims in the 400 freestyle relay against Justin-Siena on Wednesday.

Vintage's Will Flint, left, and Matthew Larson finish the 100 breaststroke in 11099 and 11913, respectively, against Justin-Siena on Wednesday.