Napa Valley Prep Report: Vintage girls earn the right to brag in pool by beating Napa, 25-11
Share this
{{featured_button_text}}
1 of 3 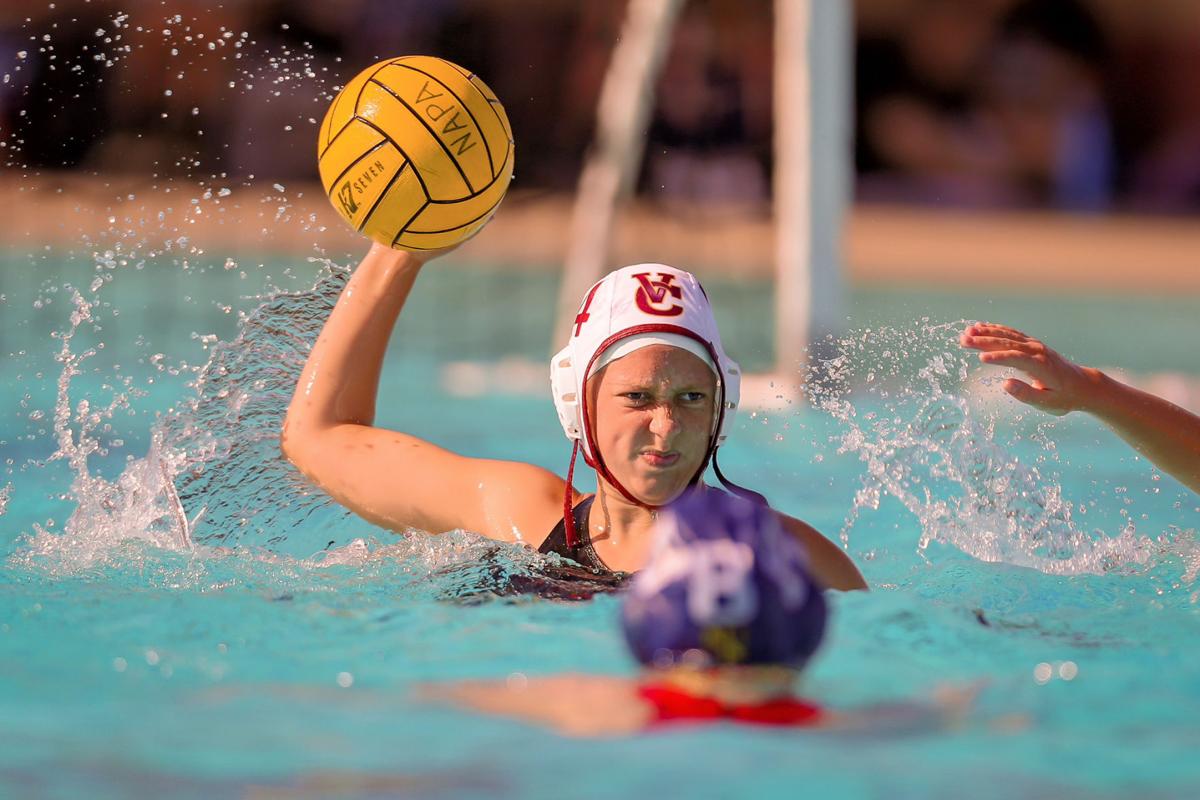 Vintage's Annika Meyering winces at a nearby splash as she gets ready to pass the ball during Wednesday's Big Game match against visiting Napa High. 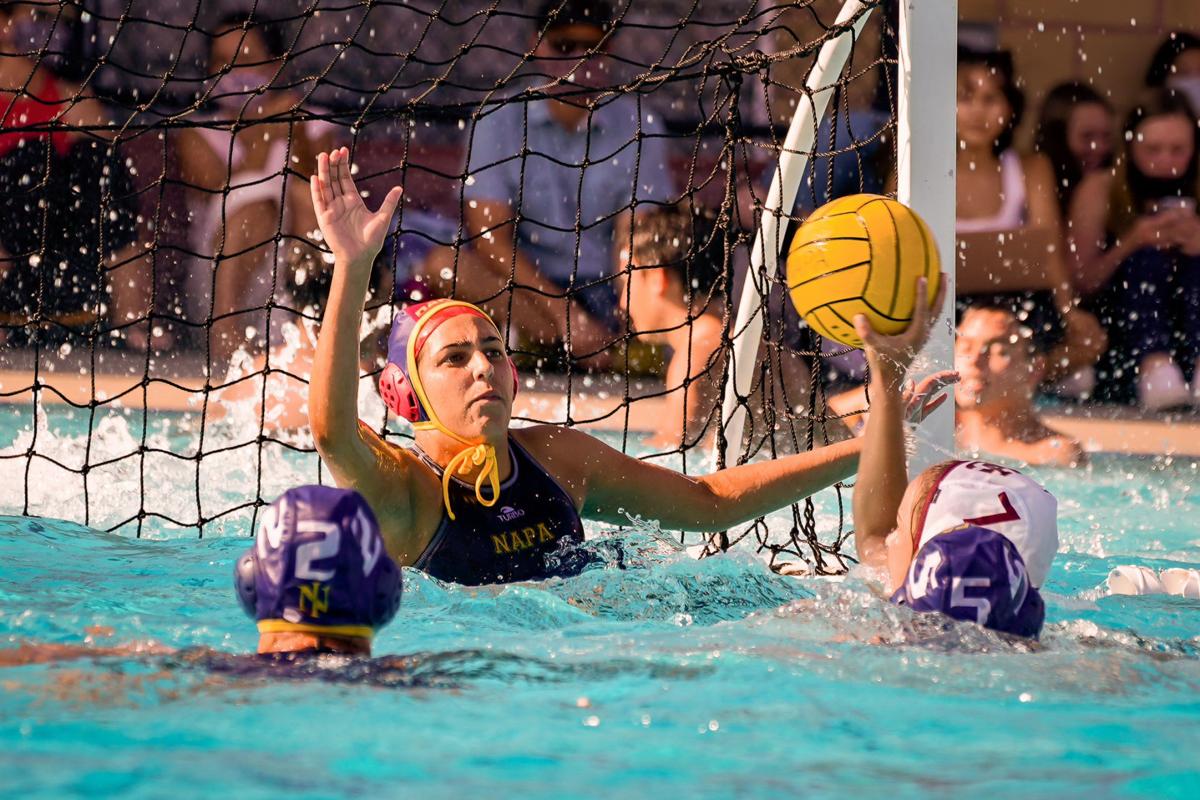 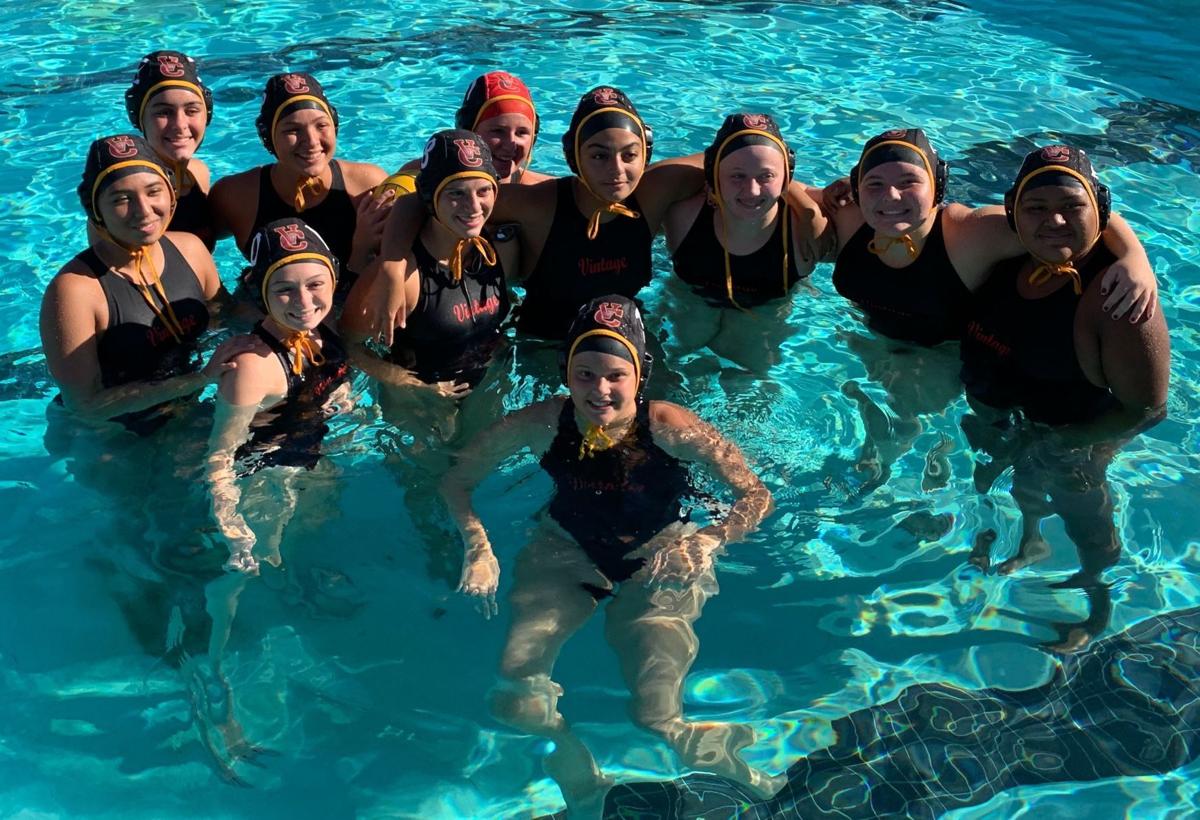 The Vintage High girls water polo team defeated visiting Napa High, 25-11, in a Big Game match on Wednesday that was the Vine Valley Athletic League opener for both crosstown rivals.

In head coach Ali Dragoo’s debut, the Braves placed ninth in the varsity girls division and 12th in the boys out of 16 schools Saturday in the annual Ed Sias Invitational on a two-mile course at Hidden Valley Park in Martinez.

The Crushers dropped three close games at the McClatchy Tournament in Sacramento on Saturday.

“We may have lost all of our games, but these girls grew so much as water polo players,” coach Sarah Tinloy said. “The knowledge they gained was invaluable. The passion and hunger to learn that this team has will take it a long way. I cannot wait to see what the rest of this season has in store for us.”

The Crushers opened with a 7-3 loss to Christian Brothers of Sacramento. McClintick maintained a 50% block-to-goal average, earning 7 blocks and a steal and also blocking a 5-meter penalty shot. Hassen scored the first goal and earned a steal. Soffner scored another goal from center while earning 3 steals. Fry had a goal and 7 steals while also causing an ejection, giving her team a power play opportunity. Feicele had 2 assists and 2 steals. Sidhu and Kvidahl each earned a steal, and Malan earned 2 steals.

Vintage dropped its second game to Bella Vista of Fair Oaks, 9-8 in sudden death in overtime. The Crushers erased a four-goal deficit to tie the game 8-8 and force overtime, when the Broncos prevailed by being the first team to score. Fry once again led Vintage’s defense with 8 steals while adding 4 goals and 2 assists. Hassen scored 2 goals and had 1 assist. Giosetto had a goal and a steal, Sidhu had 2 assists and a steal, Bush earned a steal, and Malan caused an ejection. Soffner scored a goal and earned 3 steals. Feicele had an assist and a steal, and goalie McClintick blocked 6 shots and had a steal.

The Braves improved to 2-1 with Friday’s home rout of the Panthers from Albany.

On defense, he said, key contributions were made by Gus Mundy, Mo Holland-Neves and Ben Sebastiani.

Vintage's Annika Meyering winces at a nearby splash as she gets ready to pass the ball during Wednesday's Big Game match against visiting Napa High.