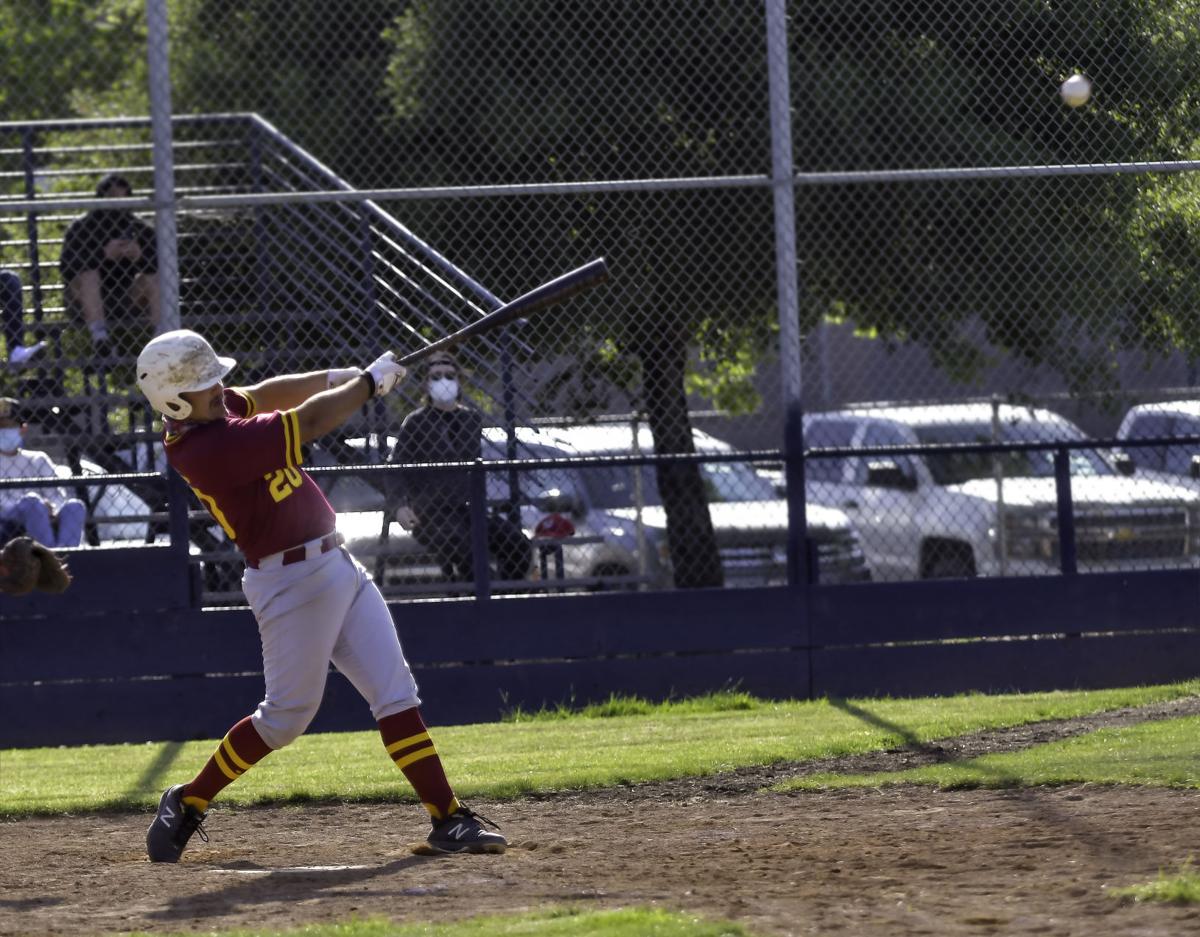 Vintage's Davide Migotto hits a double to the wall in left-center field before scoring the first run of Wednesday's game at Justin-Siena. 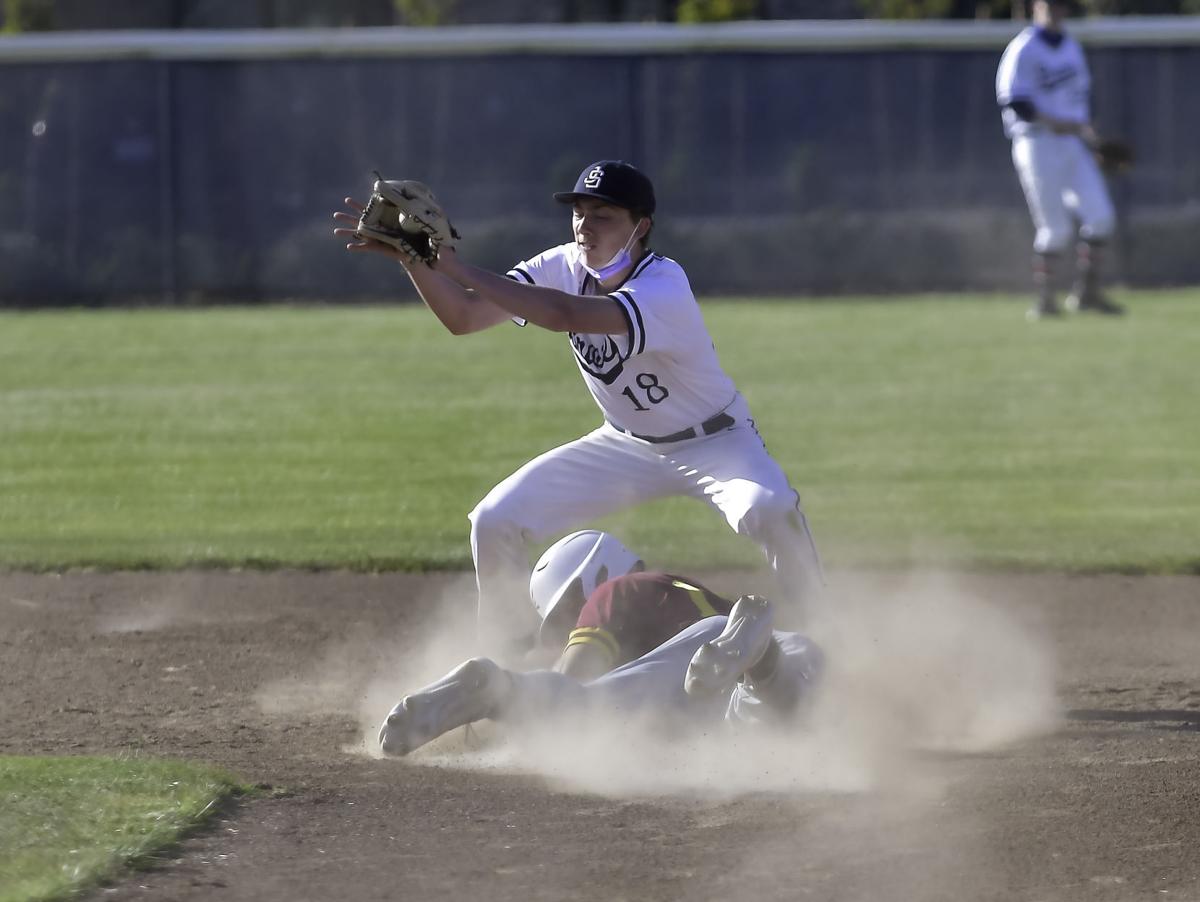 Vintage's Nick Schuttish slides in head first ahead of the tag from Justin-Siena shortstop Nick Zeiter on Wednesday.

It’s always nice when a new head coach can ease into the job with a lopsided win in their debut.

In the battle of Trower Avenue at Justin-Siena, the visiting Crushers changed the lead for the fifth time with a seventh-inning rally before holding off the Braves for a 6-5 Vine Valley Athletic League victory.

“The first win always feels good to get out of the way,” Smith said. “Most of the time you worry about, ‘Did we prepare them enough in this short time?’”

Davide Migotto (3 for 4) led off the top of the seventh with a double, Nick Schuttish was hit by a pitch and Ian Avalos (3 for 3, three RBIs) walked to load the bases for Alex Dehzad (2 for 4, two RBIs), who doubled in Migotto and Schuttish for the 6-5 lead.

With Dehzad at second and Avalos at third, Justin-Siena reliver David Elias got the next batter to look at a third strike. Third baseman Nick Andrews then got him out of the inning, nabbing Avalos at home on a fielder’s choice and retiring the next batter on a groundout.

Coach Smith then sent his son, Connor Smith, to the mound to get the save. He induced a groundout by second baseman Avalos, a popup to center fielder Benny Rabanal, and a fly out to right field Reid McCaffrey.

“It was a good game to watch, coach and play in,” said Coach Smith. “Both teams played the game pretty clean. Our pitchers competed well and had to deal with stressful sieuations. Dylan Rody was our starter and gave us two solid innings, and Erik Kvidahl came in during a tight situation and got4

Andrews started on the mound and blanked the Crushers before Daniel Kelly relieved to start the third. With two outs, Migotto doubled and Schuttish walked to bring up Avalos, who doubled in both runners for a 2-0 lead.

Vintage starter Dylan Rody also threw two shutout innings and got two outs in the third before Justin-Siena rallied off reliever Erik Kvidahl. Andrews reached on an error, Dalen Tinsley (2 for 2, two walks, run scored) and Noah Young (2 for 3, two RBIs, run scored) walked, and Daniel Kelly walked to drive in Tinsley. Madden Edwards (1 for 4, two RBIs) then put the Braves up 3-2 with a two-run double.

The Crushers tied it in the fourth and went ahead 4-3 in the fifth on an Avalos RBI double. In the bottom of the fifth, Vintage reliever Jorge Lopez-Rios got out of a bases-loaded, no-out jam unscathed with a strikeout, infield popup and another strikeout.

“The game forced a lot of situational decisions and substitutions; this allowed for a lot of players to be involved,” Coach Smith said. “As a coach, these are the types of games that make you better overall. It came down to execution and timely hits.”

The Braves regained the lead in the sixth with another two-out rally as Andrews reached on an error, Tinsley doubled, and both scored on a Young single off Lopez-Rios, but he still came away with the win.

“This was exciting baseball,” Justin-Siena head coach Jeremy Tayson said, “and despite coming up short, we were really happy with how we competed in a back-and-forth league battle and know we will only get better from here.”

American Canyon head coach Matt Brown’s Wolves gave his alma mater all it could handle in the first two innings of their season opener Wednesday. But visiting Napa High (1-1, 1-0 VVAL) exploded for nine runs in the third and added five in what would be the fifth and final inning of the mercy rule-shortened VVAL opener.

In Napa’s third, Dylan Snider was hit by a pitch and Connor Ross (2 for 2, RBI, two walks, stolen base) and Lucas Brandon (2 for 4, double, three RBIs) singled to load the bases. Snider scored on a sacrifice fly by Cameron Taylor (2 for 3, double, two RBIs) to put the Grizzlies ahead for good, 4-3. Ross was thrown out at the plate on the play. After another out, a two-run double by Leo Saldivar (2 for 4, double, three RBIs) made it 6-3.

Kaleb Matulich (2 for 3, triple, two RBIs, walk) singled, and a bunt by Max Knauer (1 for 4, RBI) drew a two-run throwing error. Knauer scored on another error on a single by Elliott Zuidema (2 for 4, two runs scored) for a 9-3 lead. After Dylan Snider (1 for 3, RBI, stolen base) singled, Ross and Brandon got their second hits of the 13-batter frame – the former an RBI single and the latter a two-run double to make it 12-3 — before the next batter was out.

Noah Massey pitched all five innings for the win, allowing no earned runs, three walks and four hits — by Dayvon Lucas (2 for 2, double, RBI), Riley Carlos (1 for 3, stolen base) and Ryan Mitchell (1 for 2) — while striking out five.

Charmaine Griffin scored a career-high 22 points and grabbed seven rebounds as the Braves improved to 1-1 in VVAL play with Wednesday night’s home win over the Wolves (1-1 VVAL).

Justin-Siena head coach Andrew Bettencourt said his team struggled to both finish shots around the rim and hit free throws in the first half, while American Canyon made three 3-pointers en route to a 23-16 halftime lead. The Braves picked up their offense in the third quarter but still trailed 36-26 at the end of it.

But Griffin had six points during a 9-0 run at the start the fourth. Down 37-35, the Braves then got a 3-pointer and 2-pointer from Mary Heun, sandwiched around an American Canyon basket, to take a 40-39 lead. With six seconds left, Griffin knocked down two free throws to push the lead to 42-39, before Lexi Rosenbrand kept the Wolves from answering.

“Our coaching staff is really proud of our players for their effort, belief, physical and mental toughness, and execution tonight,” Bettencourt said. “We felt like we played pretty well throughout, but just weren't able to finish.

“Finally, in the fourth quarter, we started finishing plays at a higher rate and really turned up the defensive intensity. The players were excited to get this first win, and we look forward to another tough matchup on Friday night against a good Vintage squad (at home).”

Kate Kerr had 13 points, nine rebounds and two steals and Lizzie Qui had a tremendous floor game with 10 points, six rebounds, seven assists, two steals and no turnovers Wednesday as the Crushers (1-1 VVAL) bounced back from a season-opening loss to American Canyon.

“Another hard-fought league game,” Donohoe said. “I get the feeling they’re all going to be that way this year. We came out with great defensive energy for the second game in a row.”

“We were able to maintain the lead throughout, thanks to consistent commitment defensively, and we took much better care of the ball tonight,” Donohoe said.

The Grizzlies led 13-11 after a quarter and 22-21 halfway through their season opener Wednesday night in Sonoma, before getting outscored 17-11 in the third and 10-9 in the fourth.

The game at Vintage had seven lead changes, starting with Kevin Montes roping a booming RBI double in the second that one-hopped the fence in left for a 1-0 Braves lead. Vintage took a 2-1 lead without a hit in the bottom half.

Justin-Siena (1-1, 0-1 VVAL) scored five runs in the fourth inning to chase Vintage starter Peyten Czekalewski, with Matt Chadsey getting a bases-clearing triple. The Crushers came back with three in the fifth on three Braves miscues to tie the game at 8-8. Vintage then broke open the game in the sixth with five runs off of losing pitcher Aidan Hermann. Ian Fernandez, who stood out at catcher, had the key hit for the Crushers.

Gomez was the winning pitcher, going the final two innings and allowing only one hit, a walk and no runs. Chadsey led the Braves with a triple, two singles and three RBIs, while Montes added a double and Andrew Hileman scored twice.

“It was an exciting and entertaining game on both sides. We have some things to work on and we will get better,” said Justin-Siena head coach Steve Meyer.

Justin-Siena host Montgomery at 2:30 p.m. Saturday on the varsity field.

The Crushers opened their season in impressive fashion against visiting Sonoma Valley on Wednesday. Guided by Vintage hoops alumni Jared Rendon and Josh Kho, the Crushers played inspired defense in jumping out to a 17-0 by the end of the first quarter. The stifling defense continued, led by Jace Lopez (5 points) and his willingness to dive for loose balls and hit the hardwood. Vintage took a 29-13 lead into halftime and matched the Dragons’ 21 points in the second half to pull out the victory, the first for its rookie coaches.

The Crushers were led in scoring by Nathan Marroquin and Connor Gongora with 14 and 10 points, respectively. Grayson Wyman made his presence known down low with eight points, followed by Eli Mindle with five.

Vintage's Davide Migotto hits a double to the wall in left-center field before scoring the first run of Wednesday's game at Justin-Siena.

Vintage's Nick Schuttish slides in head first ahead of the tag from Justin-Siena shortstop Nick Zeiter on Wednesday.