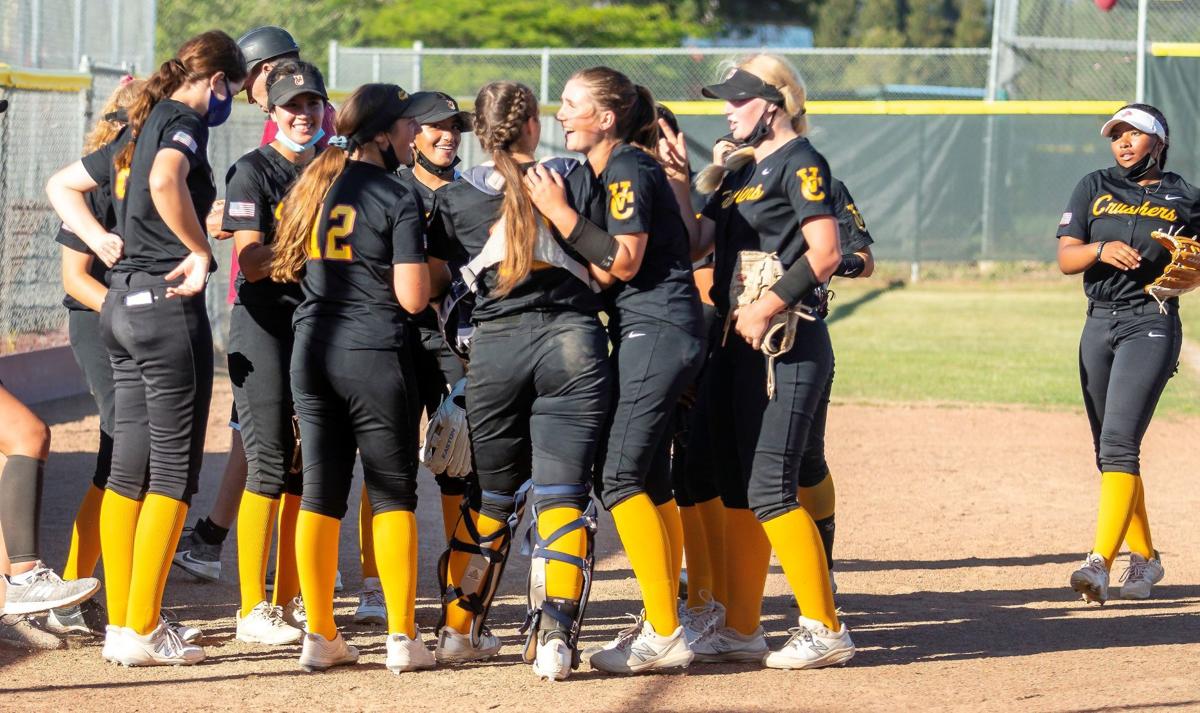 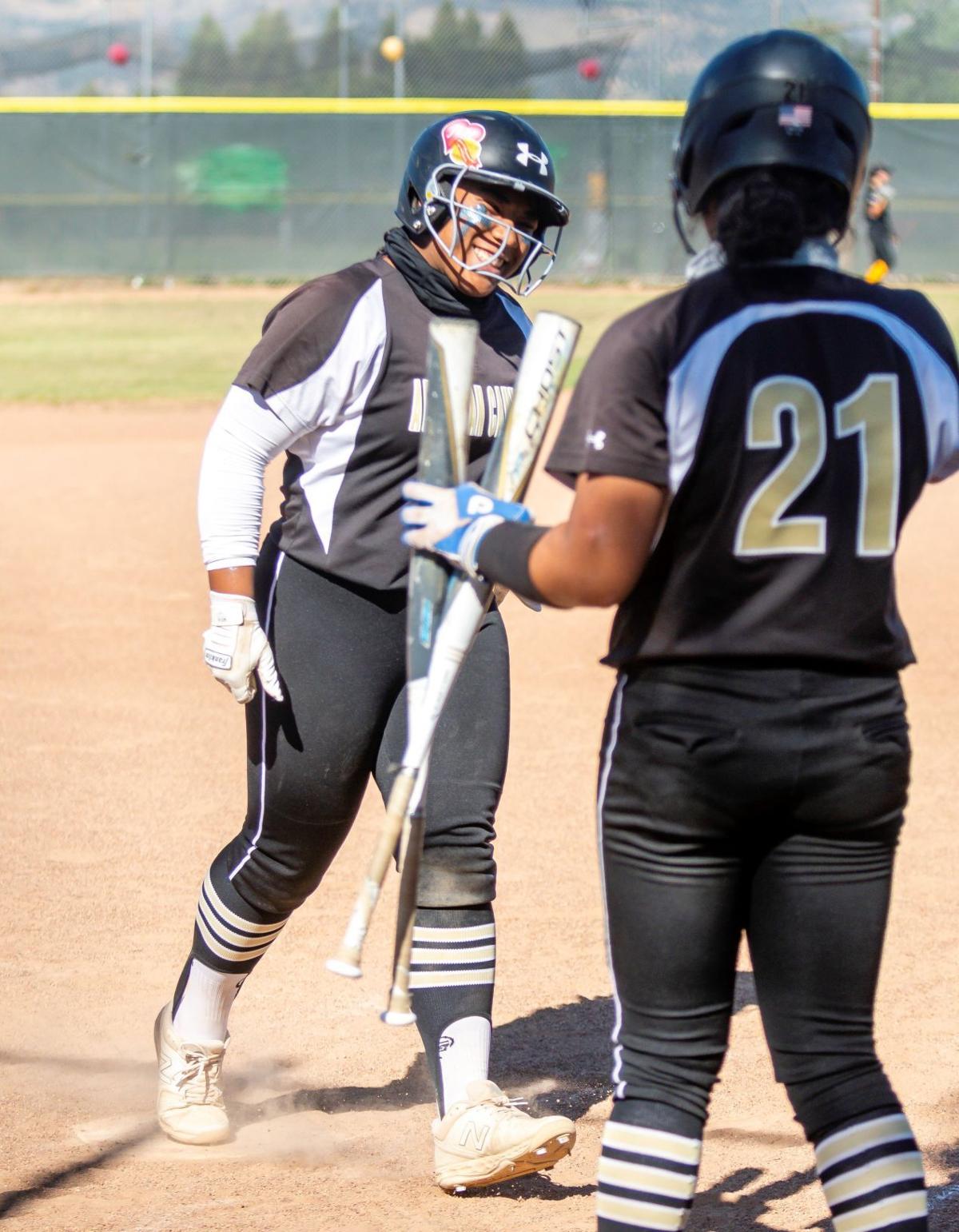 Jaida Fulcher, left, is greeted by fellow freshman Alexandria Yra after her long home run puts American Canyon on the board in the third inning at Vintage on Thursday. 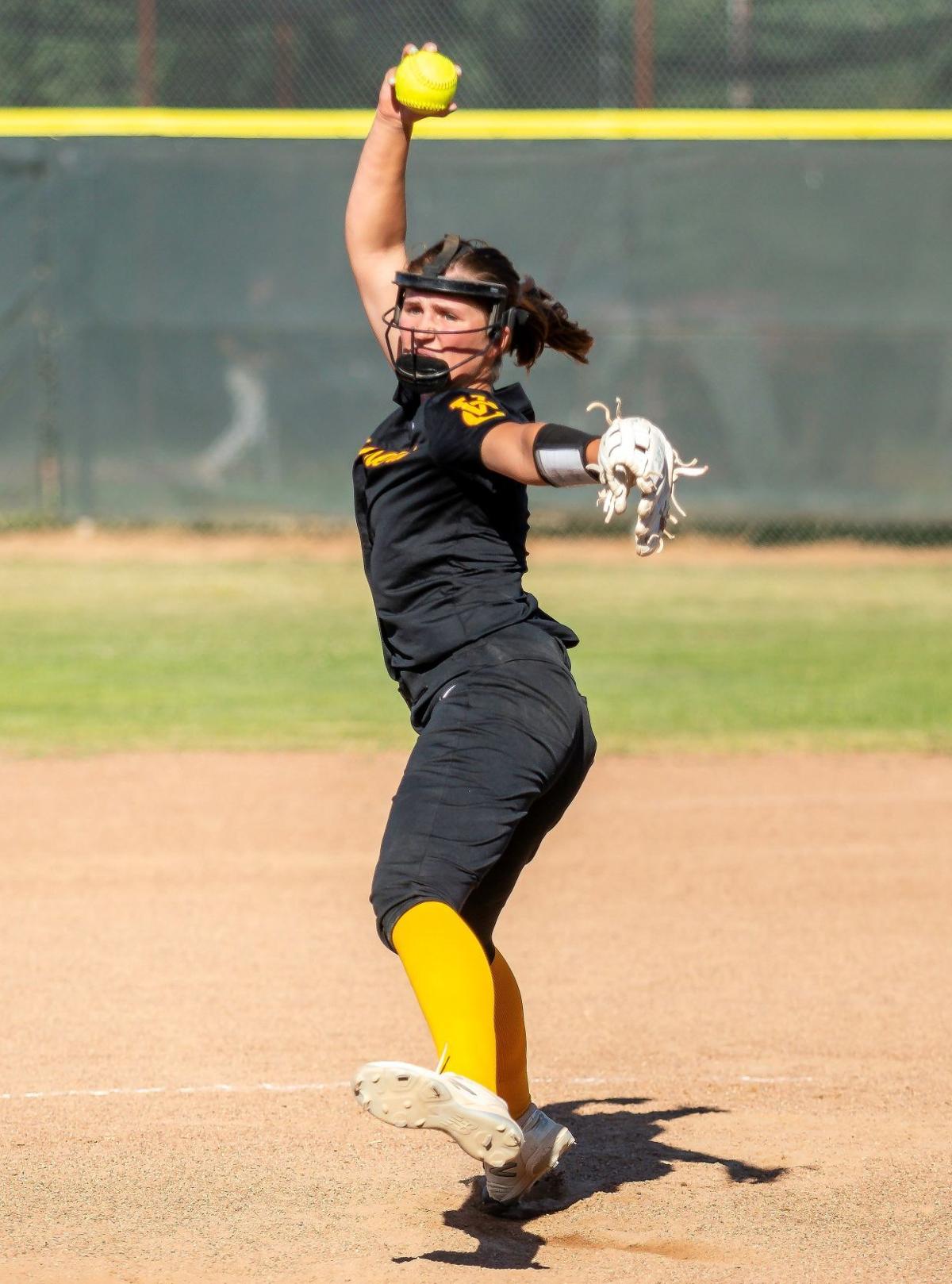 Vintage reliever Shelby Morse stranded three American Canyon base runners in the seventh inning to get the win Thursday. 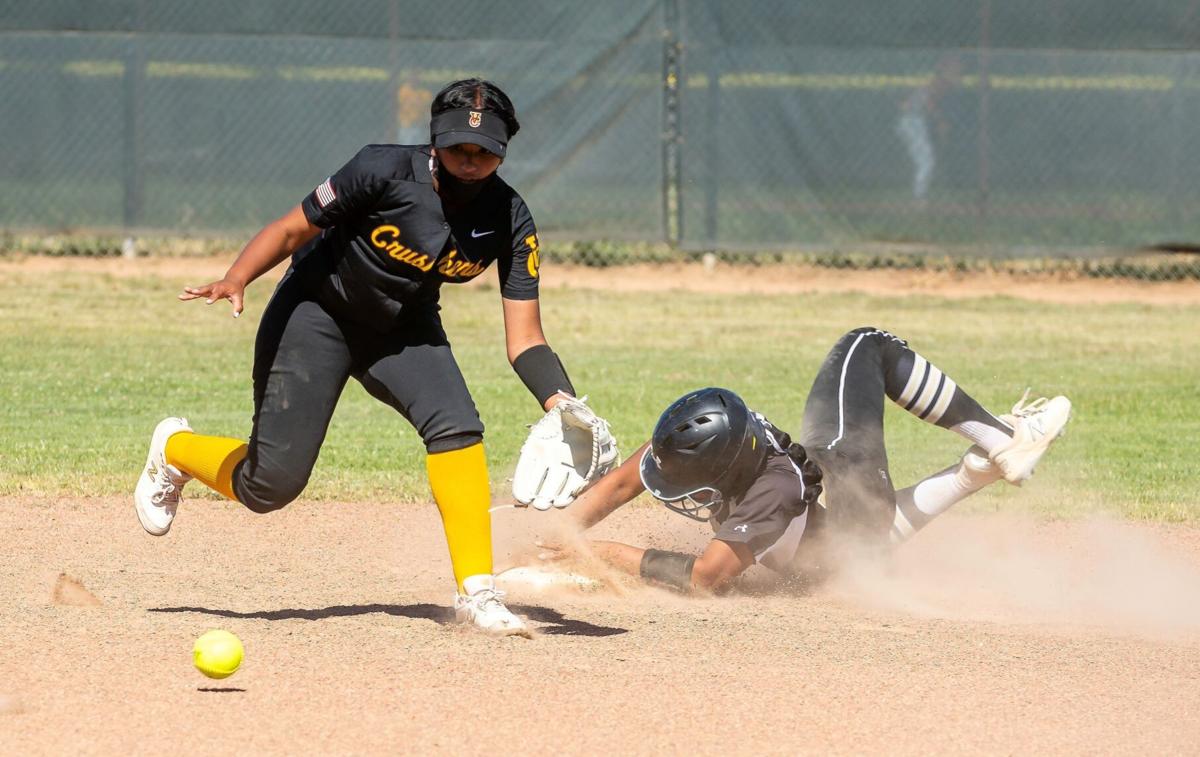 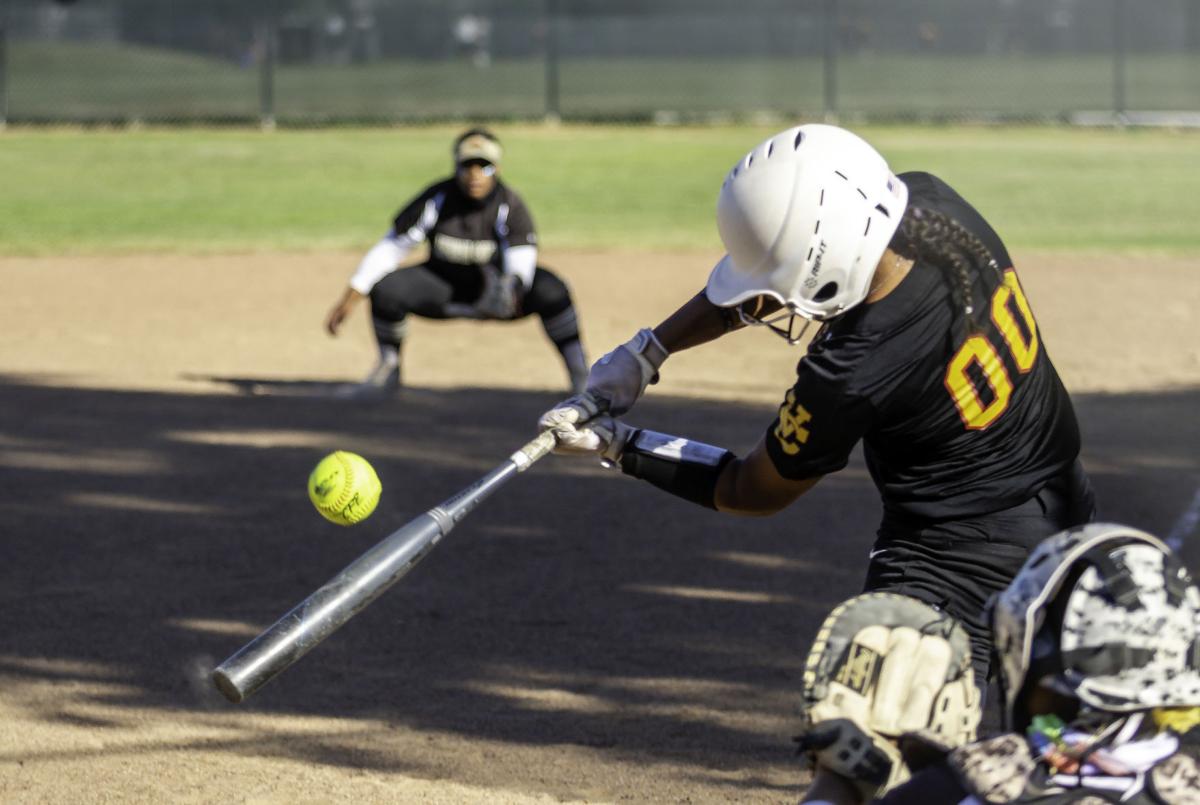 Vintage senior Jordan Allen doubles in the game's first two runs as American Canyon's Jaida Fulcher looks on from first base in the second inning Thursday. 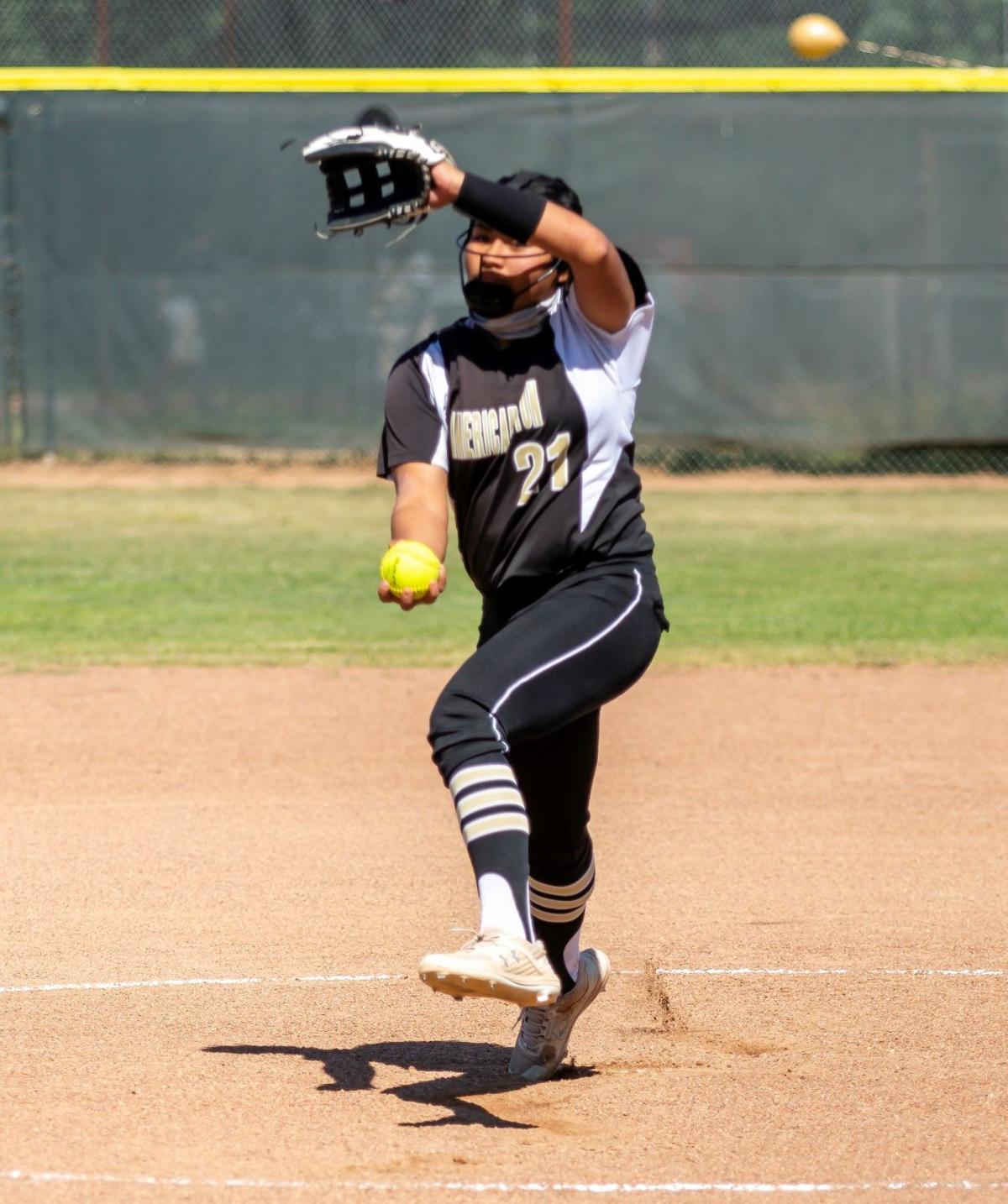 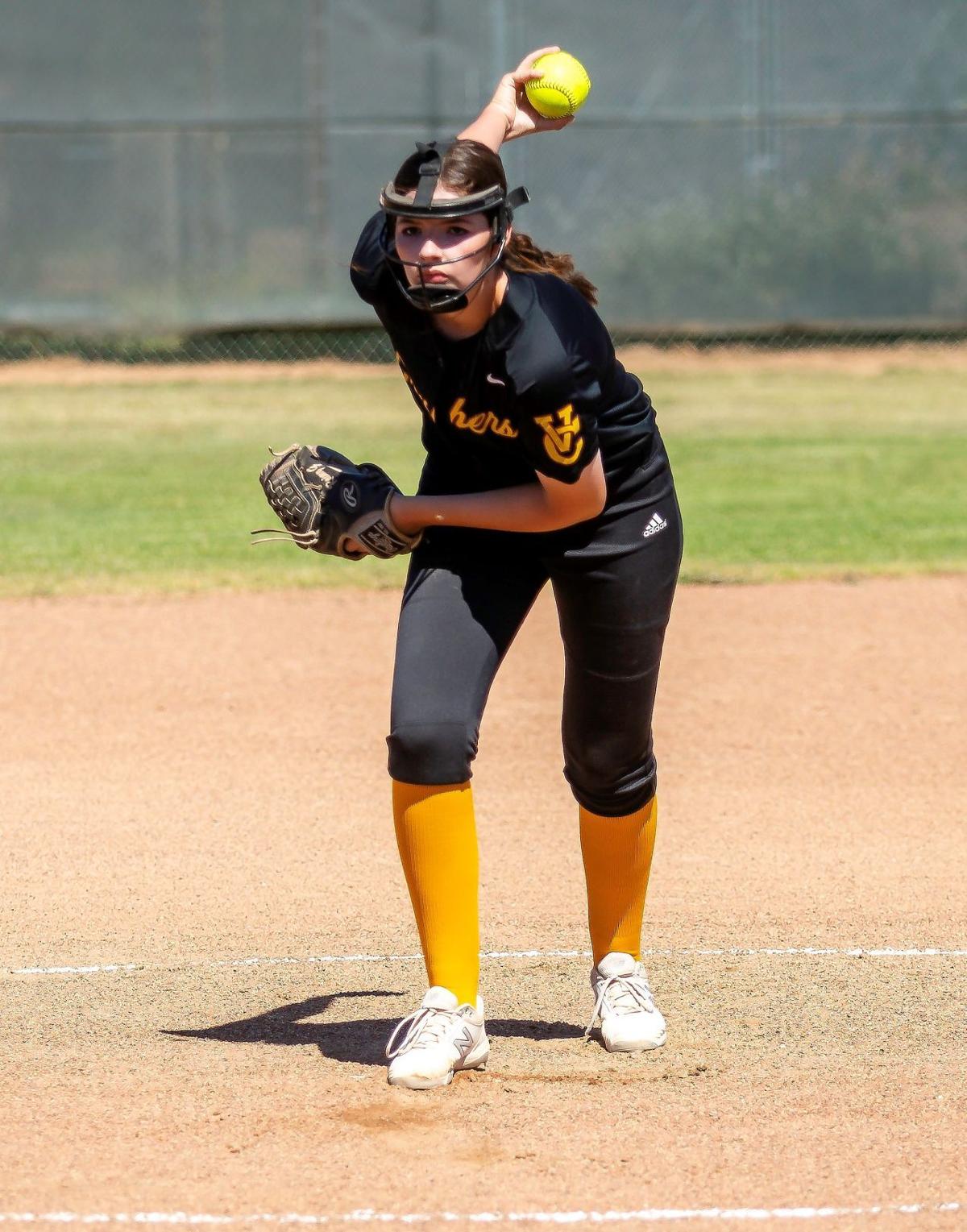 Vintage starting pitcher Raimy Gamsby struck out 10 and allowed one hit in four innings against visiting American Canyon on Thursday. 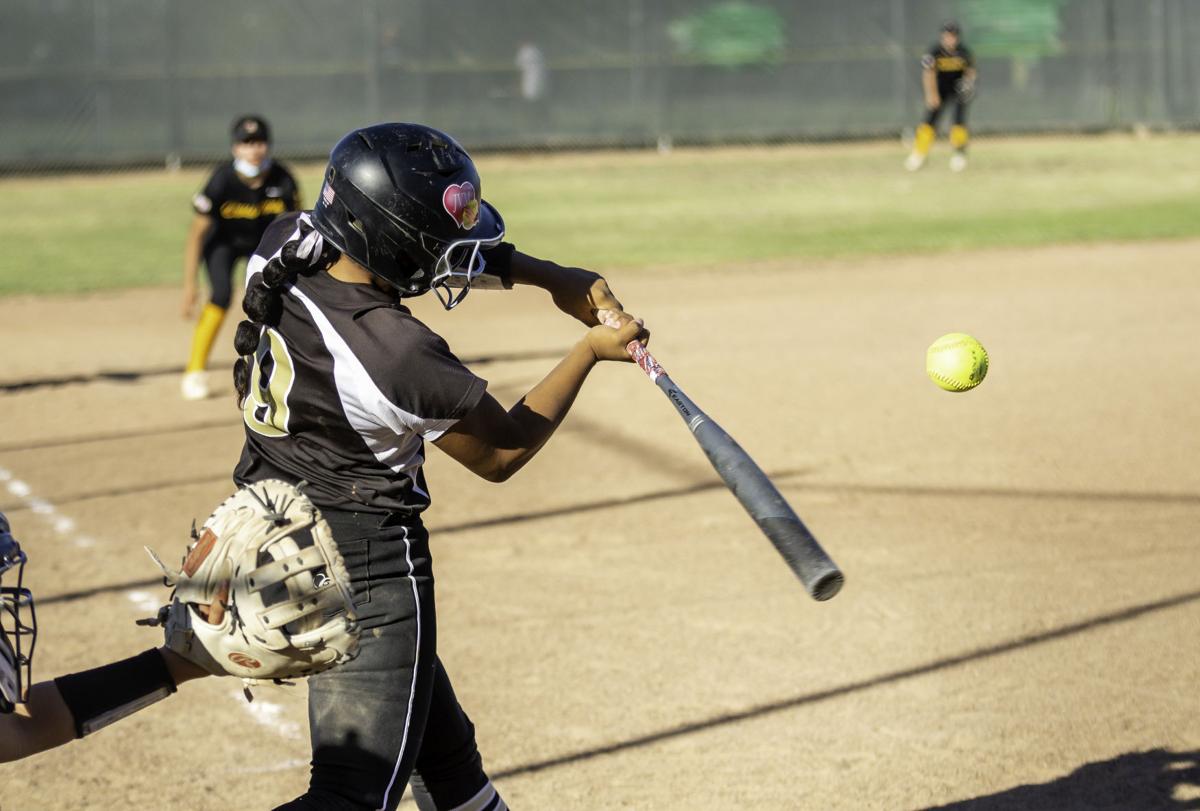 American Canyon's Raegan Jackson singles in the fourth inning at Vintage on Thursday. 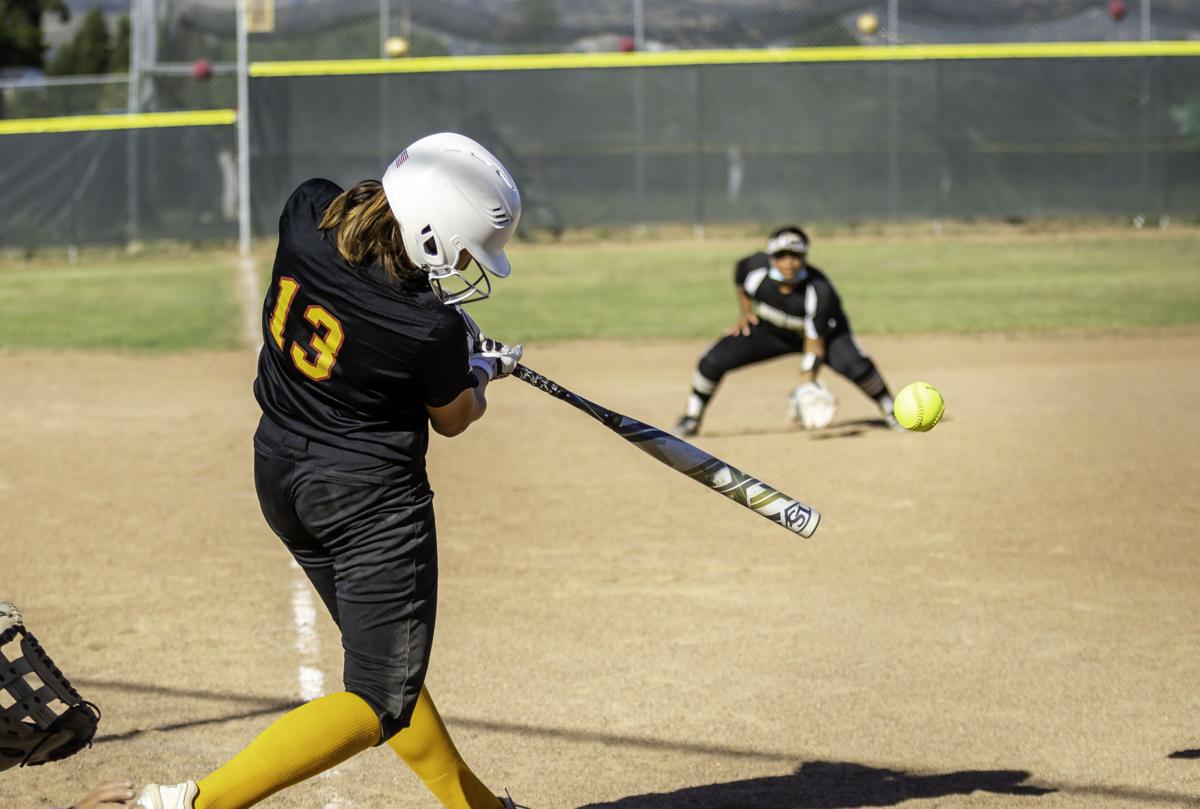 Vintage's Shelby Morse gets one of her game-high three hits against American Canyon on Thursday.

The bases were loaded in the top of the seventh inning Thursday as Vintage softball relief pitcher Shelby Morse looked to protect a two-run lead.

Raegan Jackson was hoping one swing of the bat would give visiting American Canyon its first lead of the game, and a chance at a perfect Vine Valley Athletic League record.

After Jackson worked Morse to a full count, the right-handed Morse went into her windup and threw a pitch that clipped the right side of the strike zone for a called third strike to close out the game. Morse ripped off her protective mask and let out an emotional roar to celebrate the 5-3 win, which gave the Crushers a chance to finish in a first-place tie with the Wolves.

Neither will actually win a league title. The VVAL voted to not have champions in any sport when COVID-19 restrictions had lessened enough to schedule the entire school year of high school sports in these final 14 weeks. The focus was on participation, and many multi-sport athletes have played two sports at once during a Season 2 that began in mid-April.

Not having a pennant to win hasn’t kept the more competitive teams from trying to finish at the top of the standings, however — like these two softball squads, each of which should return all but one player next year.

“You want to play meaningful games and at least you're playing for something,” Vintage head coach Robert Poppe said. “So these are good jitters, good pressure to have. I look forward to a few more years battling with AC. (Wolves head coach Roger Harris) has got a young group. We're also young right now, and I think they're going to be a good challenge for years to come, so it’s really exciting.

“I knew it was going to be a close-scoring game. I didn't think it was going to be a blowout either way. Like I told the girls in the fourth, ‘they're gonna come back, they're a good team, and we’ve got to be ready.’ They mounted their comeback and, luckily, Shelby kept them off the bases long enough to get that last out.”

Harris, whose Wolves never finished higher than third in the old Solano County Athletic League, finished second in their first VVAL campaign in 2019. After the 2020 season was canceled a few games into it, lone senior Maddy Chambers got to graduate with a team that had already clinched first place before Thursday’s loss.

“It's just like I told the girls, you can't define the season on today's game,” Harris said. “The girls had a great year and they played well. They had their first loss in the second game of the year to Fairfield and to run off 12 wins in a row before facing Vintage today, it was a great year for the girls.”

The Crushers opened the scoring in the bottom of the second. Starting pitcher Raimy Gamsby (2 for 4) led off the frame with a single to center field and was replaced on the bases by courtesy runner Jillian Harnois. After a pop-up, Bianca Avalos (2 for 2) drew a walk and Camila Barboza (1 for 1) loaded the bases with a single to right field.

On Senior Day for Jordan Allen (1 for 1), the Crushers’ lone 12th-grader launched a double to deep left field that allowed Harnois and Avalos to score for a 2-0 lead. After freshman pitcher Alexandria Yra struck out the next batter for the second out, Morse (3 for 4) made it 4-0 with a two-run single to the right-center gap.

After American Canyon freshman Jaida Fulcher (1 for 3) made it 4-1 by leading off the third inning with a no-doubt home run to left that may have reached the baseball field, Yra stranded two Crushers in the bottom half to get out of the third unscathed. But after Yra allowed nine Crusher baserunners in 2⅓ innings, Harris had junior ace Yanesa Rosas pitch the final four innings.

“(Yra) told me she wasn't hitting her spots and that she just wasn’t on today, so I gave her another inning,” Harris said. “I like to give the kids another chance because I don't want to play the what-if game. I usually give them another inning to right the ship and today she just didn't have it. Yanesa was our mainstay this year and the three games we had last year.”

Vintage added an insurance run in the bottom of the fourth. Taylor Lauritsen (1 for 4) led off with a single to center field, taking second base when the ball was misplayed, and went to third on a Morse single. Rosas answered with two straight strikeouts, before Gamsby knocked in Lauritsen with a single off Rosas.

“We didn't see (Yra) the first time around,” Poppe said of the Crushers’ 2-1 loss at American Canyon on May 4, when Rosas pitched a complete game, “so honestly I thought it was a good call on their coach to put in a pitcher we didn't see. Luckily we found (Yra’s) spots and were able to pick up hits, and then the challenging part was to hit the pitcher that shut us down last time. That's honestly what I wanted to see. I want to get another whack at that girl.”

Gamsby has been lights-out pitching for Vintage and Thursday was one of her better showings. The junior lasted four innings while striking out 10 batters and allowing one earned run.

The Wolves began their attempted comeback in the sixth, after Morse relieved Gamsby. Leila Jackson (1 for 3) crushed a double down the left-field line and Raegan Jackson (1 for 2) was hit by a pitch, putting two runners on with only one out. Kylee Sandino (1 for 3) bounced a ball up the middle into center field to score Leila Jackson from second, and Rosas grounded into a fielder's choice to drive in another run to make it 5-3. Fulcher then hit what looked like another home run, but Jordan Allen made the catch in deep center field to end the frame.

“Shelby dug in with bases loaded and we told Jordan ‘We aren’t walking in a run — they’re going to have to earn it,’ and thankfully they didn’t,” Poppe said. “Really proud of her digging down and getting us that win. Shelby was feeling that one of her pitches wasn’t working earlier in the inning and I kept calling it. So there was a little trouble for a couple of batters until we were able to talk and figure it out.”

Brianna Allen and Emily Vanderbilt each went 1 for 4 to round out Vintage’s 12-hit barrage.

At one point, Fulcher pulled off an impressive full split at first base while fielding a throw from across the diamond.

“That's one thing about these girls, they haven’t been behind a lot this year. So it kind of tested them a little bit, but these girls have battled all year long,” Harris said. “Whether they're up or they're down, they don't get too high, they don't get too low. They were (feeling) low at the end there, in the circle after the game, but it's just a fun group of girls to watch battle.”

Napa High School Athletic Hall of Fame: Blanton thanks coaches for their sacrifices

Ed Blanton thinks of his coaches, such as Jerry Dunlap, Nacho Franco and Tim Mulligan, when he looks back on his days as a two-sport athlete a…

A roundup of recent high school volleyball results in the Napa Valley.

Jaida Fulcher, left, is greeted by fellow freshman Alexandria Yra after her long home run puts American Canyon on the board in the third inning at Vintage on Thursday.

Vintage reliever Shelby Morse stranded three American Canyon base runners in the seventh inning to get the win Thursday.

Vintage senior Jordan Allen doubles in the game's first two runs as American Canyon's Jaida Fulcher looks on from first base in the second inning Thursday.

Vintage starting pitcher Raimy Gamsby struck out 10 and allowed one hit in four innings against visiting American Canyon on Thursday.

American Canyon's Raegan Jackson singles in the fourth inning at Vintage on Thursday.

Vintage's Shelby Morse gets one of her game-high three hits against American Canyon on Thursday.