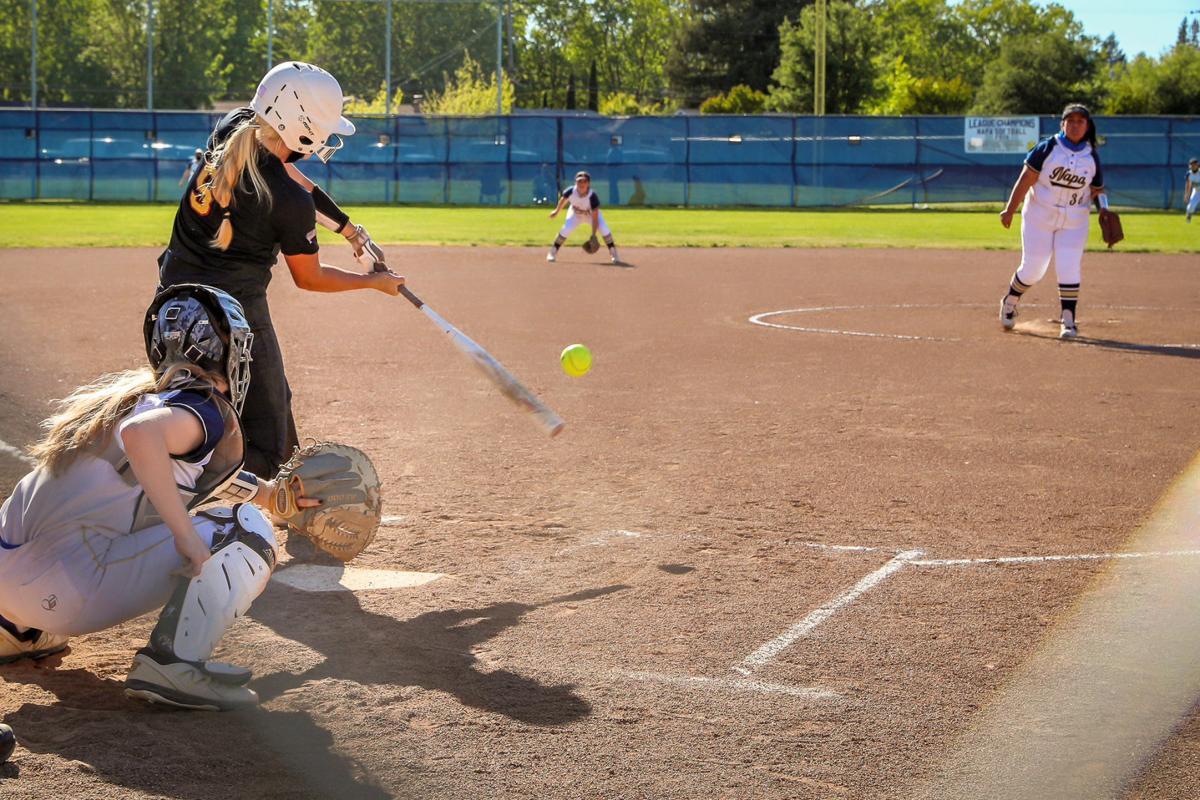 Vintage High batter Emily Vanderbilt fouls off a pitch before drawing a full-count RBI walk in the fifth inning at Napa High on Tuesday. 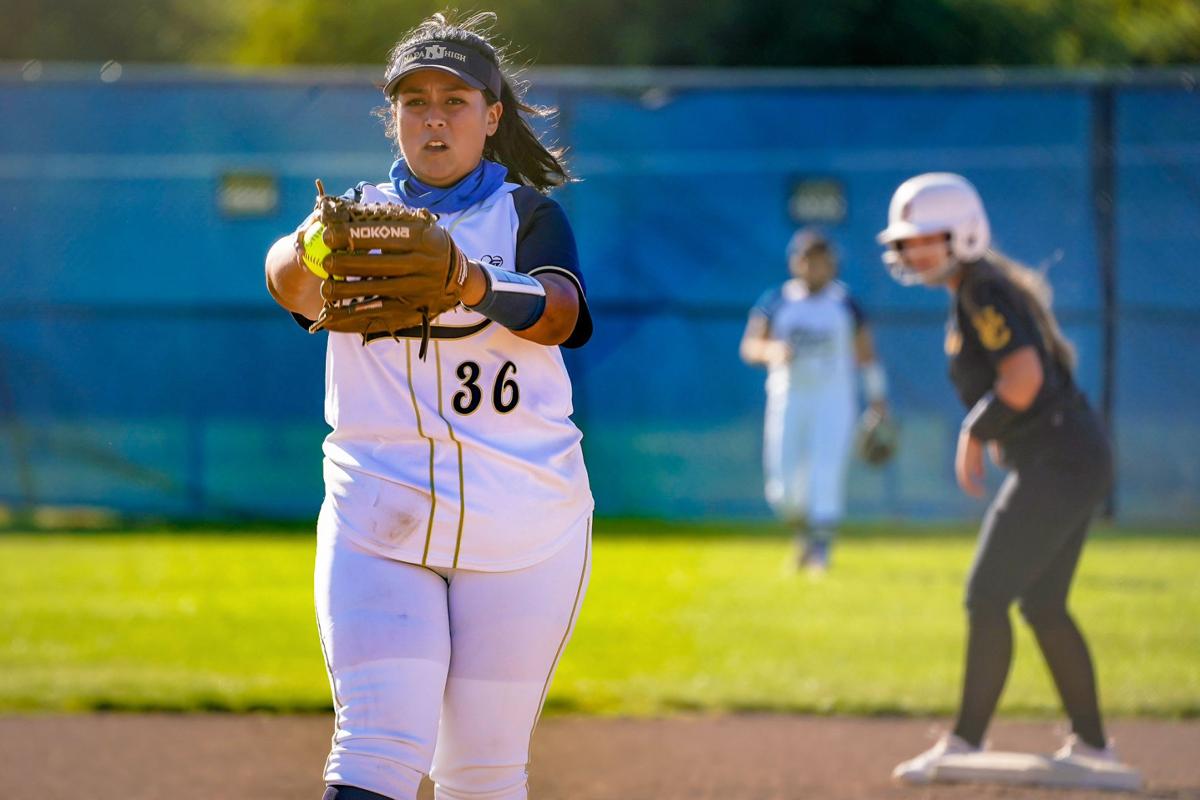 Napa High starter Karen Sepulveda pitches in the top of the fifth inning with the bases loaded against Vintage on Tuesday. 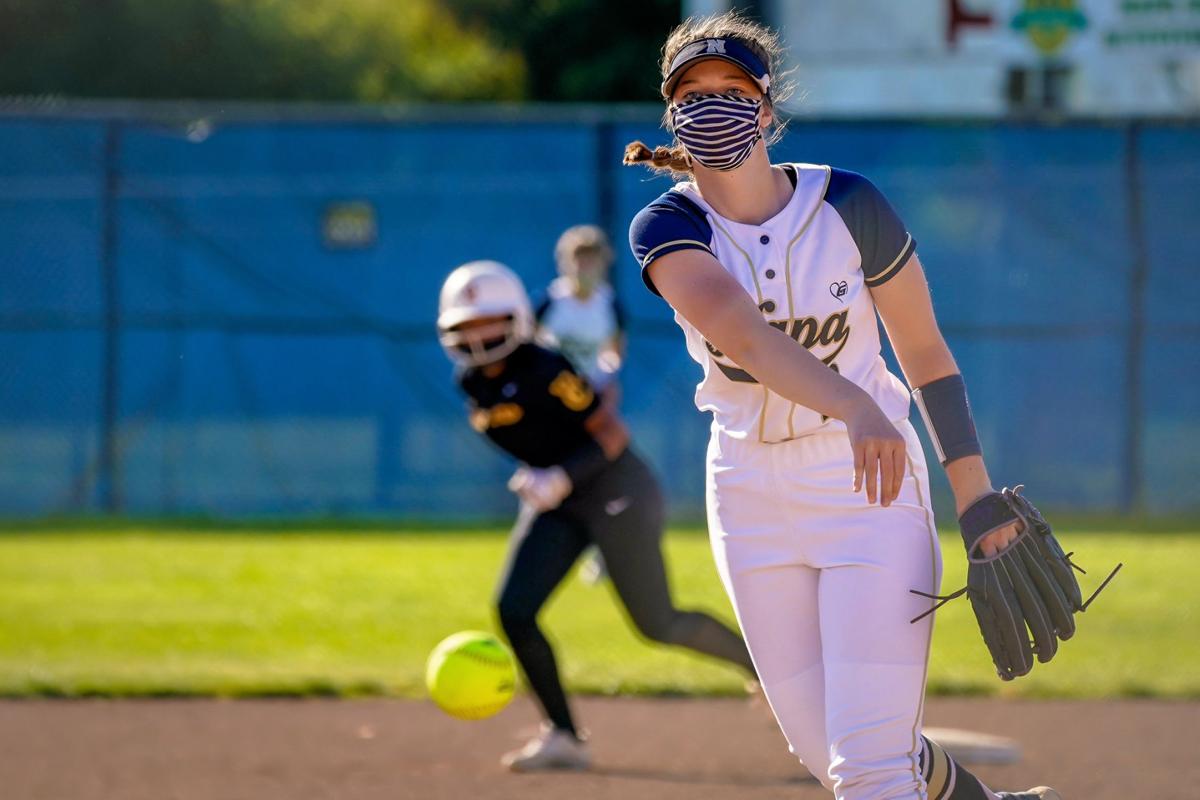 Alyssa Michie pitches in relief for Napa High in the fifth inning of Tuesday's Big Game against Vintage. 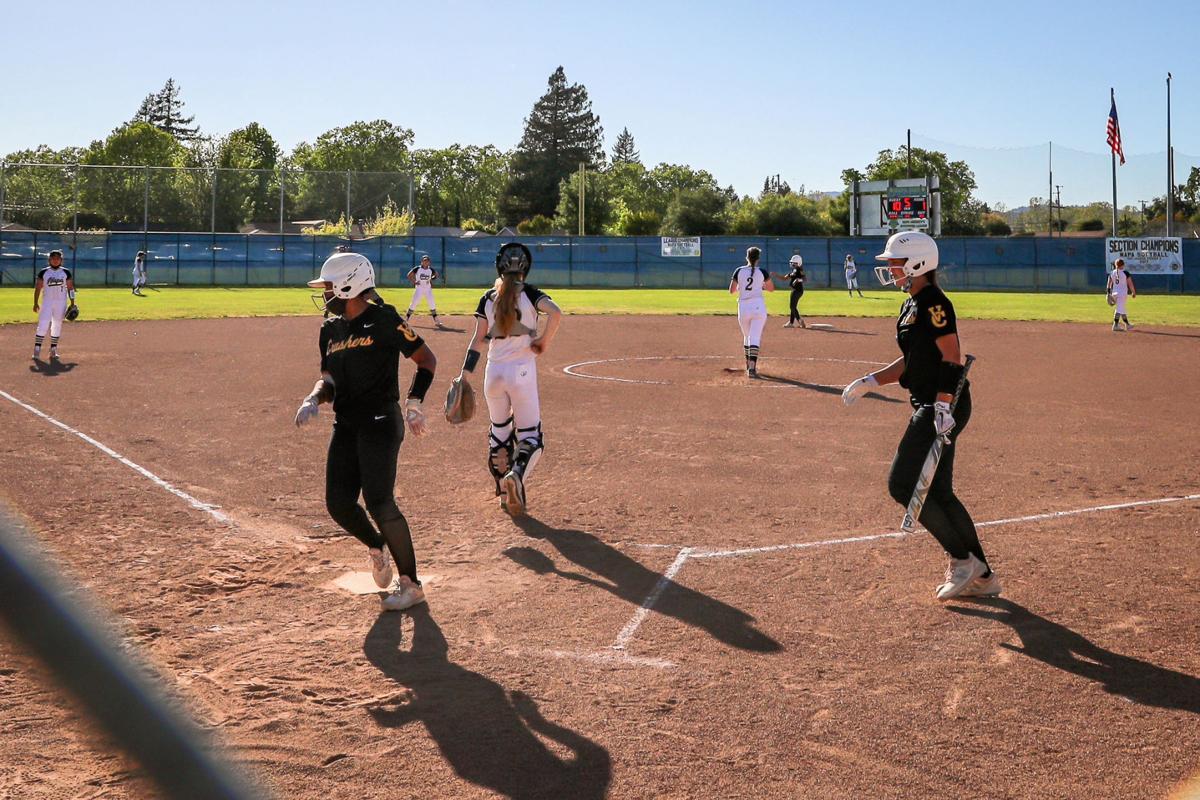 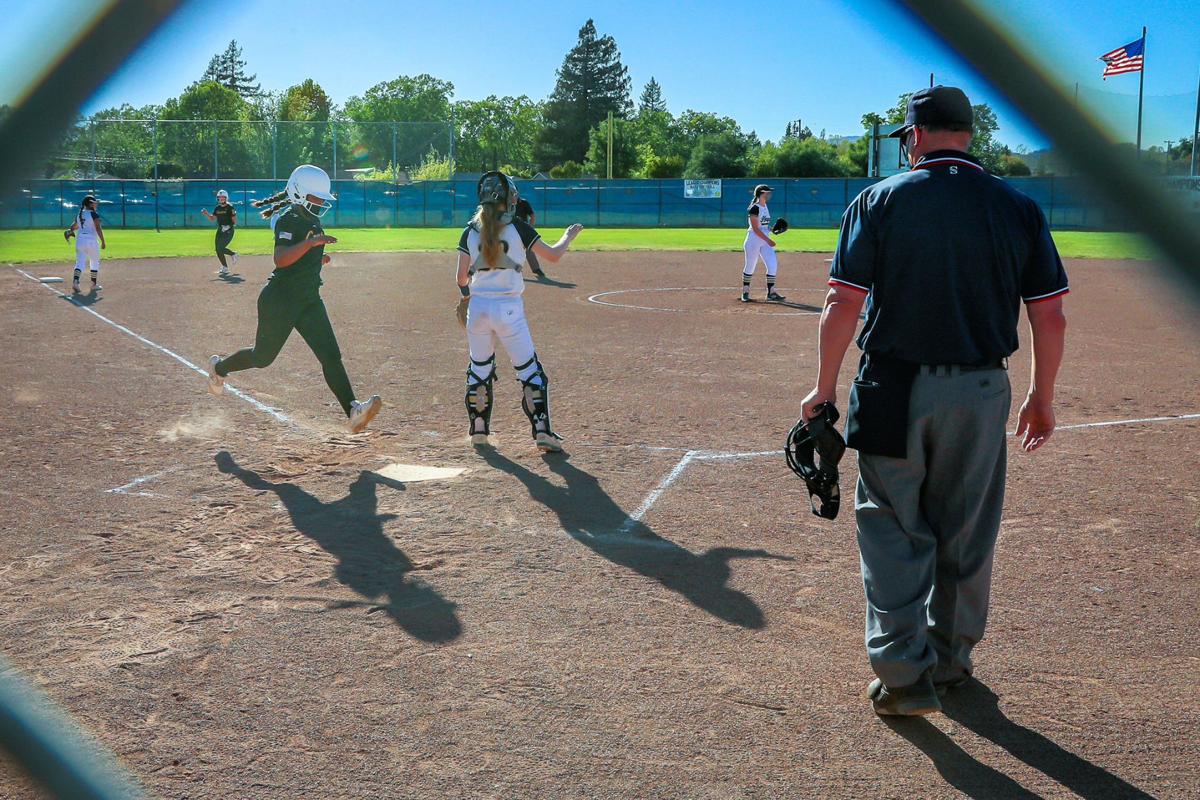 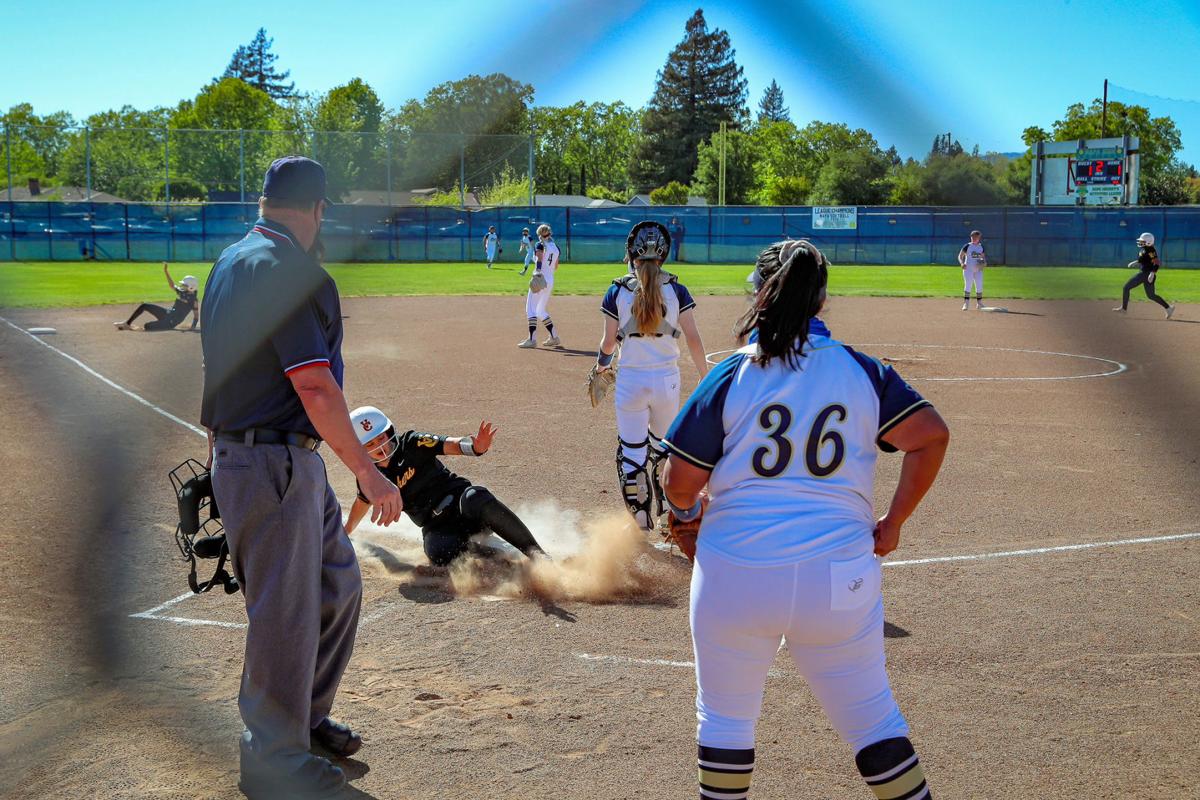 Vintage softball players circle the bases during their seven-run rally off Napa High starting pitcher Karen Sepulveda (36), shown backing up a play at the plate on Tuesday. 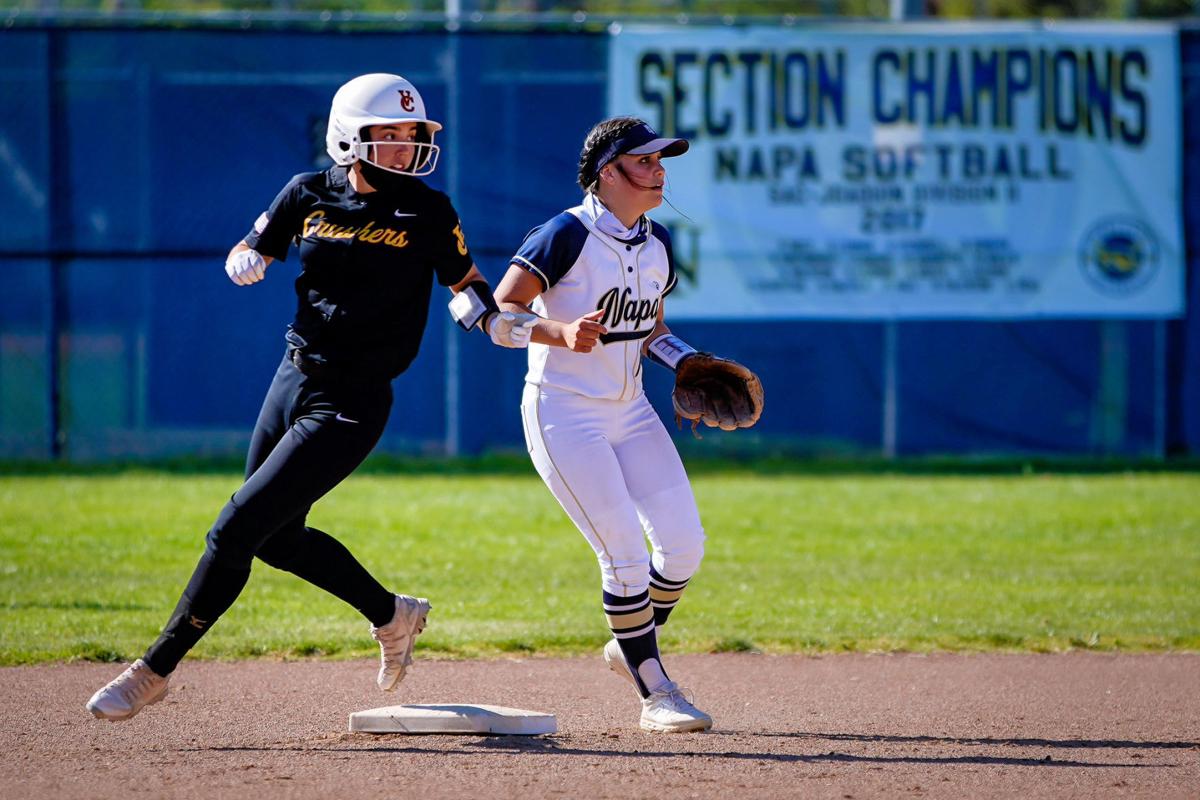 Napa High shortstop Jordan Blackmon waits for a throw as a Vintage runner rounds second base on Tuesday.

Senior designated hitter Alana Valentine started off the first Big Game softball contest of the year as well as Napa High could have hoped, launching a leadoff home run over the centerfield fence off of hard-throwing Vintage High hurler Raimy Gamsby in the bottom of the first inning.

Unfortunately for the hosts, that would be the lone hit of the contest for the Grizzlies as the Crushers used a seven-run second inning to blast their way to a 12-1 Vine Valley Athletic League victory in a mercy rule-shortened five-inning contest.

“It’s really rewarding to get our first win over Napa,” Vintage head coach Robert Poppe said of the Crushers since he took the helm in 2019, when they lost both VVAL meetings to Napa by a run. “We focused on that coming into the game. I told the girls ‘It doesn’t matter what the opponent’s record is — if we come in and play Vintage softball the way you guys can play, we’re going to be competitive game in and game out.’”

It was the second Big Game victory for the Crushers’ lone senior, fourth-year varsity starter Jordan Allen. In 2018, under then-head coach Cat Guidry, Vintage faced Napa three times in Monticello Empire League play and pulled off an 8-4 shocker in the second of those meetings. Napa won the other two by the mercy rule, 13-3 and 10-0.

“It feels so good to be able to play this game,” said Allen, who along with her freshman sister, Brianna Allen, were key pieces in Tuesday’s blowout win. “To just come out this year and just kick butt, it felt pretty good.”

Gamsby brushed off Valentine’s first-inning solo blast and went back to work. The junior was electric all afternoon, each pitch consistently making an audible pop in catcher Breanna Perez’s mitt. Gamsby struck out of the next three batters in the first inning and by the end of the second frame had six punchouts. She threw four innings, allowing only one hit and one earned run while striking out nine.

After Brianna Allen ripped a two-out single in her first Big Game at-bat but was stranded by Napa starter Karen Sepulveda, the Crushers got on the board with seven runs in the top of the second inning and didn’t look back.

Shelby Morse opened the frame with a single to right field, Gamsby singled to left and got a courtesy runner, Xitali Mora, and Perez drew a walk to load the bases. Camila Barboza tied the game for Vintage (4-0, 3-0 VVAL), smacking a ball into right field that scored Morse from third. Mora attempted to score from second, as well, but the sophomore was thrown out at the plate with a perfect throw from right fielder Molly Travis to UCLA commit Caity Newburn.

Sepulveda got the second out of the inning with her second strikeout for Napa (1-4, 1-3 VVAL), but the top of the order was coming up. Jordan Allen crushed a double to centerfield that scored Perez, and a bloop single from Bianca Avalos scored Barboza and Jordan Allen to make it 4-1.

“Once we get a hit, there is just a momentum that just keeps going throughout the lineup,” Jordan Allen said. “That’s what's really good about this team and I love it.”

The floodgates stayed open as Brianna Allen singled to continue the rally; the freshman was 3 for 3 for the game while scoring twice and knocking in one run.

Emily Vanderbilt followed with one of the best hits of the day, a double down the left-field line that plated two more runs for a 6-1 lead. The sophomore advanced to third on the throw to the plate, and Morse knocked in Vanderbilt on a single to left to make it 7-1.

“I have got 13 hot bats right now and every kid in my lineup on any given pitch can do damage,” Poppe said. “We have had a tendency to start the first inning slow, even spotting runs, but sometimes that wakes up the girls.”

Over the next few innings, the Grizzlies reached base twice on errors but continued to struggle against the speed of Gamsby’s pitches. Napa never overcame the second-inning onslaught.

In to pitch junior Alyssa Michie. The junior gave up RBI walks to the first two batters she faced, Brianna Allen and Vanderbilt, before Morse knocked in Lauritsen and Brianna Allen.

The Crushers did all their damage on 16 hits for the contest.

“The toughest out of the game to get is the third out,” Napa High head coach Ron Walston said. “We have to do a better job of keeping runners off base and you just need to try and help them keep their heads up and keep playing the game until the last out.”

Vintage squares off with Casa Grande of Petaluma at home Thursday. The Grizzlies play next at home Tuesday against Sonoma Valley.

Rich Anderson stepped down after serving as head coach of Vintage High varsity baseball for 26 of the last 29 seasons and is now on the staff of new head coach Billy Smith.

Vintage High batter Emily Vanderbilt fouls off a pitch before drawing a full-count RBI walk in the fifth inning at Napa High on Tuesday.

Napa High starter Karen Sepulveda pitches in the top of the fifth inning with the bases loaded against Vintage on Tuesday.

Alyssa Michie pitches in relief for Napa High in the fifth inning of Tuesday's Big Game against Vintage.

Vintage softball players circle the bases during their seven-run rally off Napa High starting pitcher Karen Sepulveda (36), shown backing up a play at the plate on Tuesday.

Napa High shortstop Jordan Blackmon waits for a throw as a Vintage runner rounds second base on Tuesday.