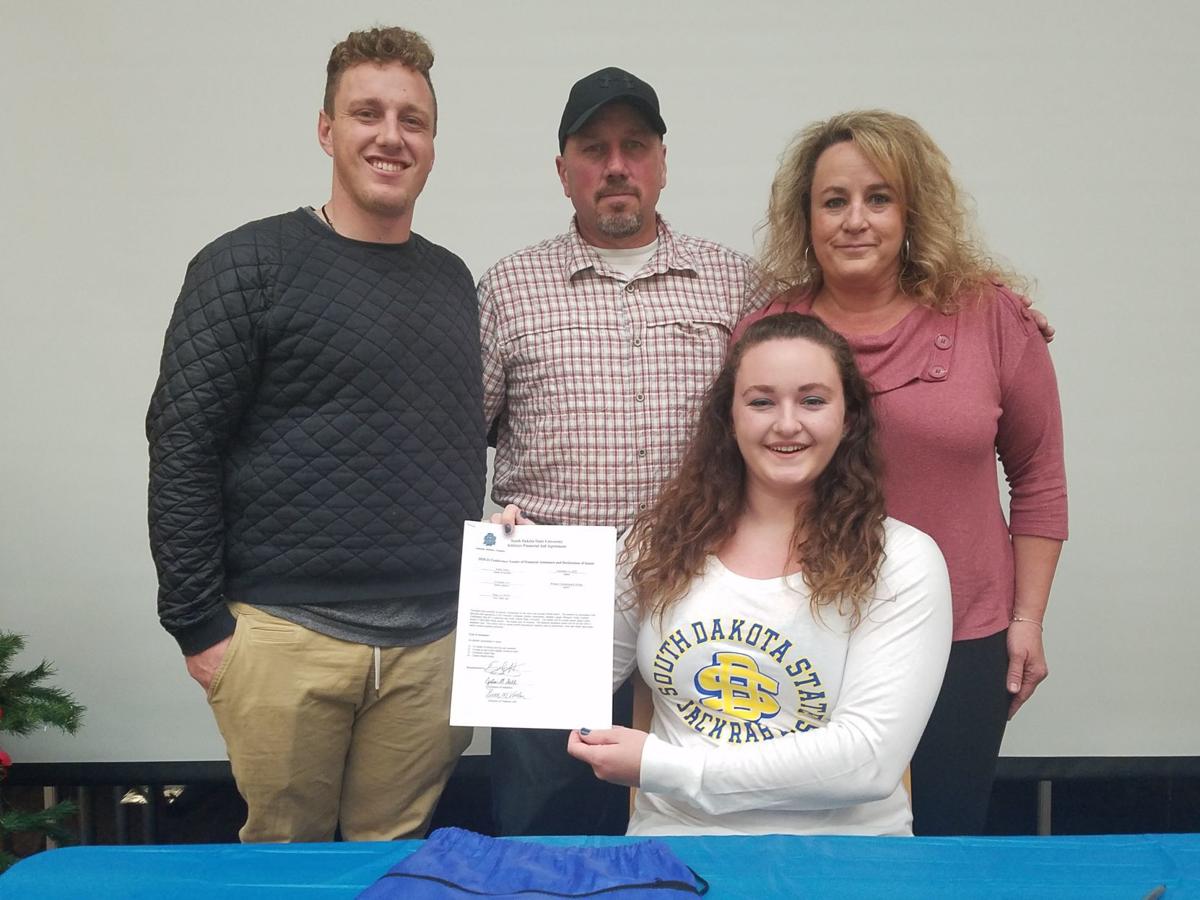 Napa High swimmer Emily Dusky holds up her national letter of intent last Saturday while posing with her brother Cody and parents Glenn and Candy at New Technology High, where she attends classes. 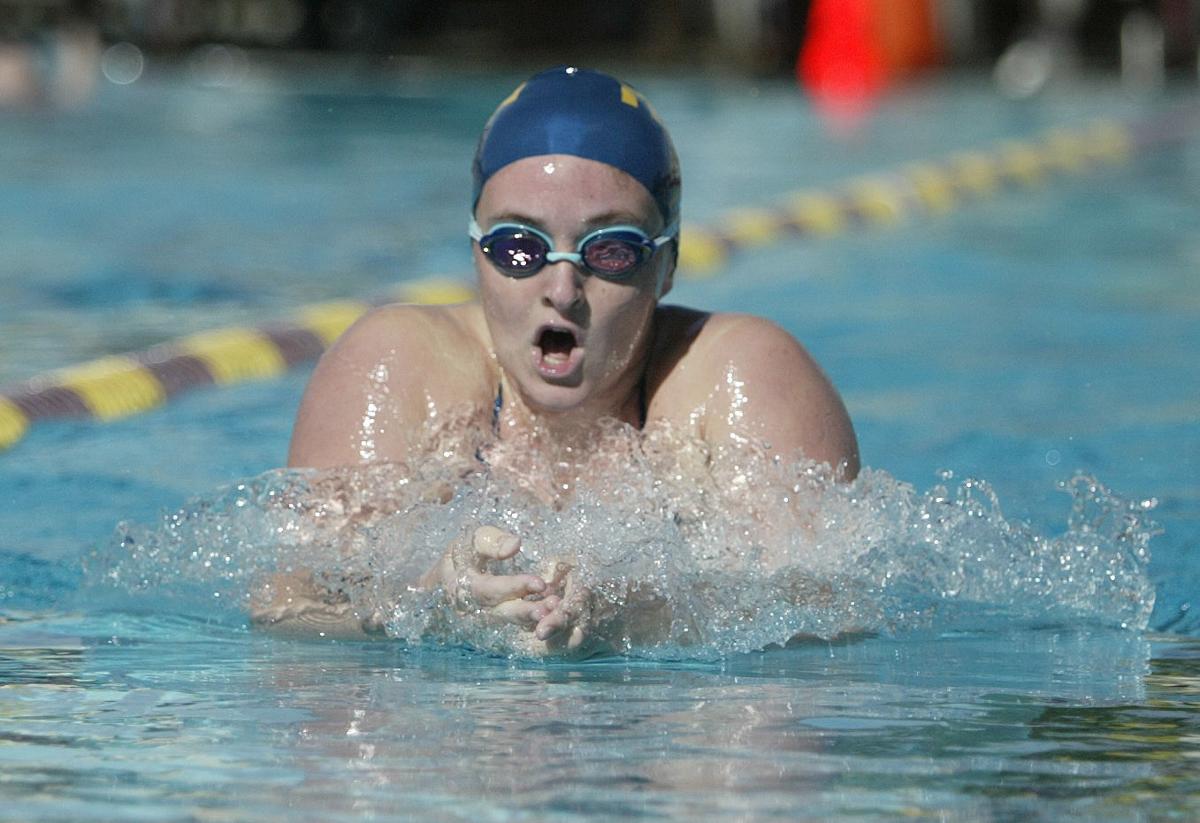 Emily Dusky does the breaststroke leg en route to winning the 200 individual medley for Napa High during a Big Game meet at Vintage in the spring of 2018. 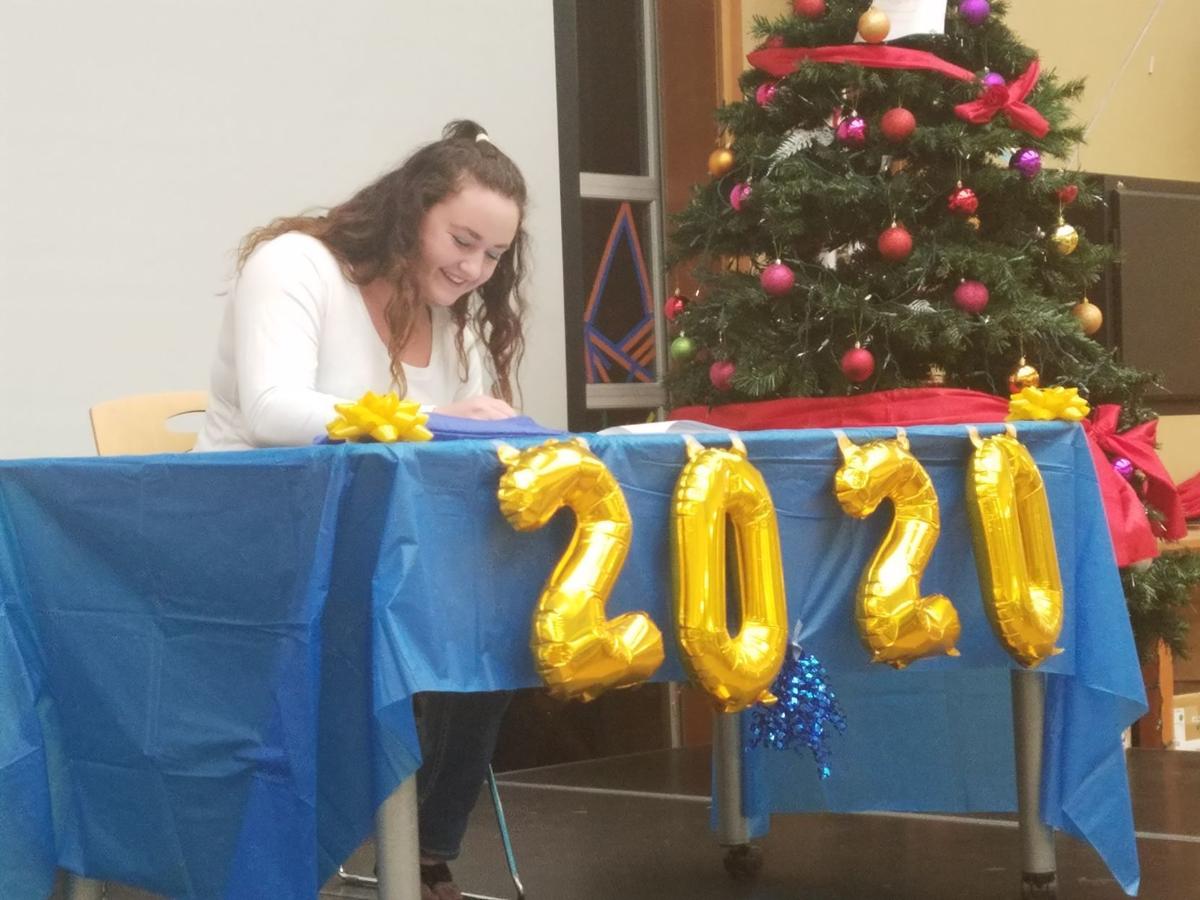 Napa High swimmer Emily Dusky holds up her national letter of intent last Saturday while posing with her brother Cody and parents Glenn and Candy at New Technology High, where she attends classes.

Emily Dusky does the breaststroke leg en route to winning the 200 individual medley for Napa High during a Big Game meet at Vintage in the spring of 2018.

Most Napa County athletes who sign with out-of-state colleges go to NCAA Division III schools because California has only 11 of them.

Most don’t sign after skipping their junior year, either.

But former Napa High swim coach Kevin Raab helped make it possible for New Tech senior Emily Dusky, who swam for the Grizzlies as a freshman and sophomore, to catch the attention of South Dakota State University’s NCAA Division I swim program.

“Kevin and his wife moved to South Dakota and bought a restaurant in Brookings and he told the coach about me,” Dusky said after her signing ceremony. “He told him, like, ‘You need to get this girl and she needs to be on this team.’”

Out of the blue, Dusky got a call from South Dakota State head coach Doug Humphrey.

“He said, ‘Hi, this is Coach Doug from South Dakota State. We know Kevin and I’m prepared to offer you this.’ I was like ‘Kevin?’ because he had kinda disappeared. I called Kevin asked if he knew Coach Doug and he said, ‘Oh yeah, I forgot to tell you.’

“I talked to Coach Doug about his coaching theory and it seemed like everything I wanted, and I instantly wanted to be there.”

Dusky flew to Sioux Falls with another girl from California – who ended up committing to another school – and Cassie Hendricks, a graduate assistant on the Jackrabbits’ staff, picked them up late at night for the hour’s drive north to Brookings.

She said the coaches were not only kind, but had a good training regimen.

“They don’t just like say ‘Here are your sets – go.’ They have a reason for each one, which I find to be very admirable,” she said. “A lot of coaches have you do what my old coach called ‘garbage yardage’ – just swim until you can’t, which isn’t the most effective way to swim. There’s technique, there’s timing, there’s planning, different distances, so many things that go into racing.”

Dusky was convinced she had found her second home for the next four years and, last Saturday morning in New Tech’s cyber cafe, signed a national letter of intent to continue her career with the Jackrabbits on a full-ride scholarship.

Brookings is in southeastern South Dakota and, for at least half the year, is as cold as Truckee on a January night.

Dusky is the daughter of Napa High sweethearts Candy and Glenn Dusky, who have been married 29 years, and has lived in Napa her whole life. Her paternal grandmother also went to Napa High, and her brother Cody preceded her by six years in the Grizzlies’ swim and water polo programs.

But she can’t wait to return to rural South Dakota in June and begin what could be more than the next four years of her life.

“I loved it,” she said of Brookings during her visit. “Everyone there was super kind. California will always be my home, of course, but people aren’t quite as open as in South Dakota, where everyone was like, ‘I need to know everything about you. What’s your story?’

“The thing I’m most scared of is the weather. It snows a lot and I’ve never really done the whole snow thing except for when I went on a trip to New York for two days. It’s cheaper, too. A house costs maybe max of $200,000. Here that’s maybe like a backyard shed. If I enjoy it during my college years, I don’t see why not I won’t stay there. It’s beautiful.”

Dusky said she good a very good burger at the Raabs’ restaurant in downtown Brookings, from the coach who used to commute to Napa from Pleasanton.

Like Raab, Dusky disappeared from Napa High after the 2018 swim season, opting to compete in club only for the Napa Valley Swim Team.

“I was practicing for college and I felt high school swimming was a waste of time. I’d been the team captain for Napa High as a sophomore, so I felt that was the most I could do there,” said Dusky, who is older than most seniors because she repeated kindergarten. “But there were no girls my age group (with NVST). I was 18 and the next oldest girl was maybe 14. I usually practice with the guys and a couple of them were 16 or 17, but it felt a little strange to be there.”

So she’s taken most of 2019 off, but she plans to go back out for Napa High swimming in the spring under second-year head coach Will Namnath.

“I really want to be in the water again,” she said.

Napa High would love to have her, too. As a sophomore, she qualified for the CIF State Swim Championships in the 100 breaststroke.

“When she was on top of her game, she was two seconds off the Olympic Trials time,” said her father, an avid hunter. “I want to go back because South Dakota is the pheasant hunting capital of the world.”

Emily said she knew the breaststroke was her best event after she beat Cody in a 50-meter relay leg during a NVST meet when she was very young.

“I was like ‘That’s his weak link and that’s my strong link, so I’m gonna pursue that,’ she recalled. “I kind of create my own drive, but the fact that he was there just kind of heightened it. It was just a fun relay but that’s a very prominent memory.”

During the call with Humphrey, she said he wasn’t concerned that she hadn’t swum competitively since the spring.

“He said ‘That’s OK, I’ve heard enough about you. I’m concerned about the fact that you haven’t been swimming, but I also think that if you’re here and in a positive environment, that it’ll affect you and I’ll get results from that,’” she recalled.

“The pool there was cold, and I really like cold pools. Everything seemed to fit like a puzzle.”

“I think the most logical thing to do is major in nursing, minor in psychology, and then do graduate school while I’m nursing so I can make money and major in psychology so I can be a psychologist, especially for little kids,” she said. “I work as a nanny and I can literally like get a baby to sleep in two minutes. If they’re having a tantrum, I can wait it out. I’m pretty calm. I ask them ‘Do you think this was a good choice or a bad choice? Why do you think that?’ They’ll be like, I don’t know.’ And I say ‘That’s not a reason. I’m going to ask again.’ It’s interesting because kids think they can lie and get away with it really easily.”

She said being a small fish in a big pool again might help at South Dakota State.

“It could very easily go either way but if there’s competition, I like I like to beat it,” she said. “On the scoreboard there, the women’s 100 breaststroke time was like 1:02.08 and I haven’t done that time since I was 16. But I’m right there, and I want to be on the board.”

Emily Dusky of the Napa Valley Swim Team has been named to USA Swimming’s 2017-18 Scholastic All-America Team, it was announced at www.usaswim…