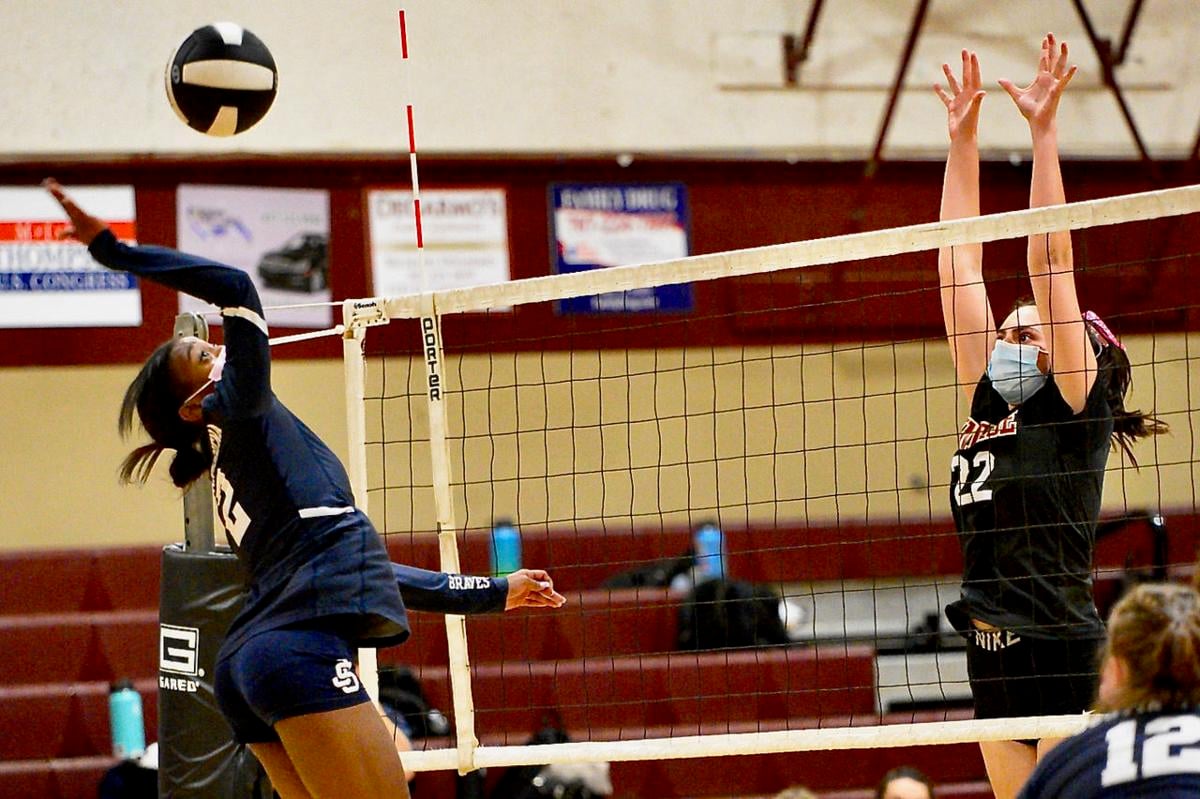 Justin-Siena sophomore Reagan Brumfield (2) winds up for a kill attempt as Vintage's Caitlin Kenney (22) looks to block it Wednesday night. 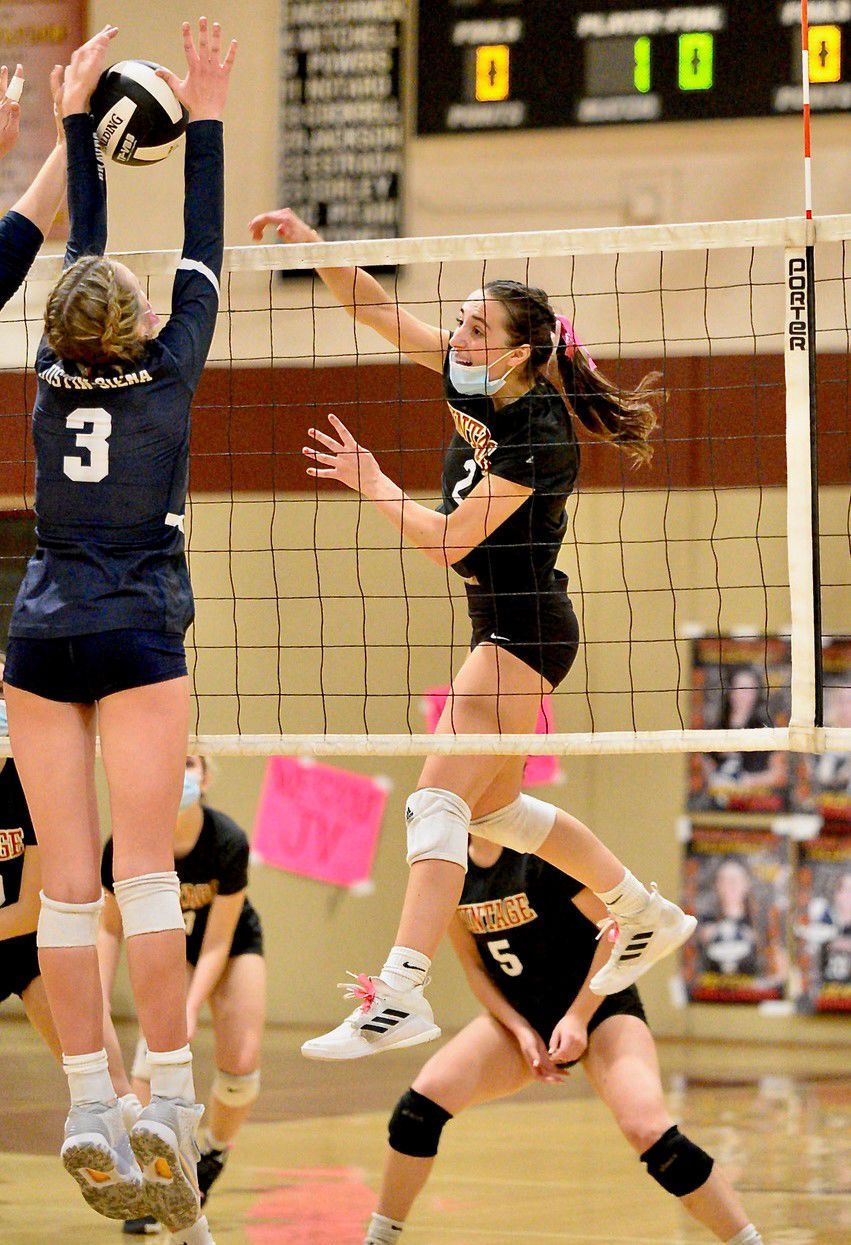 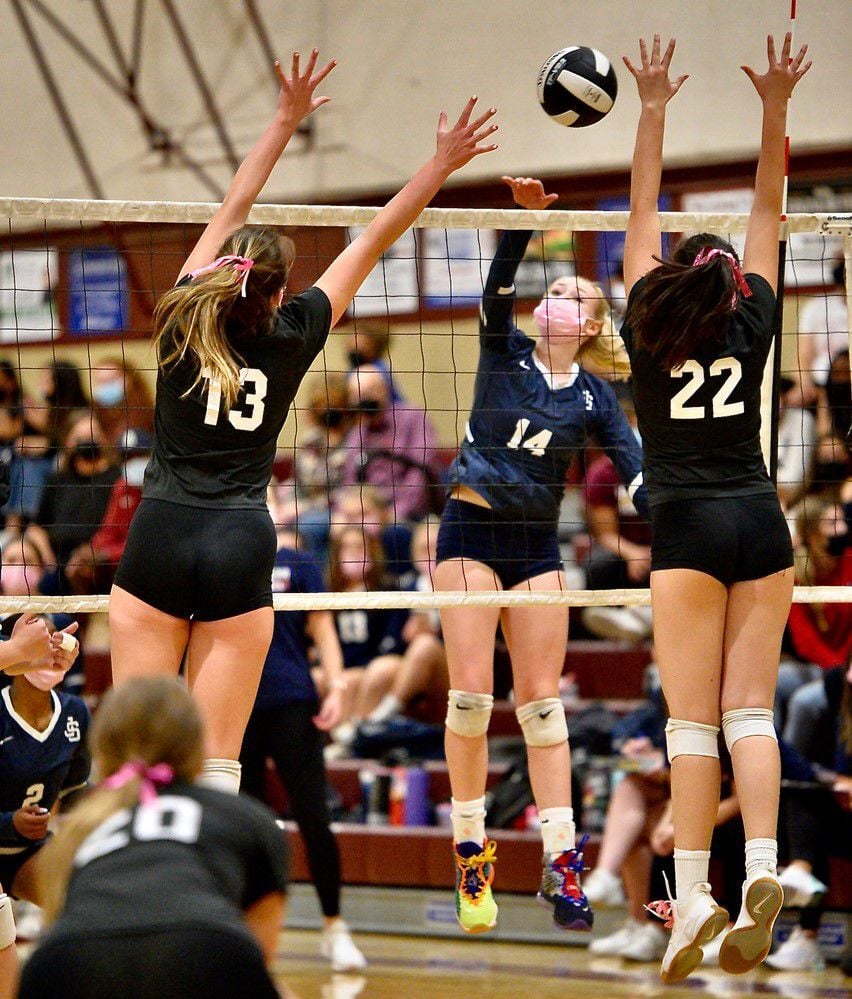 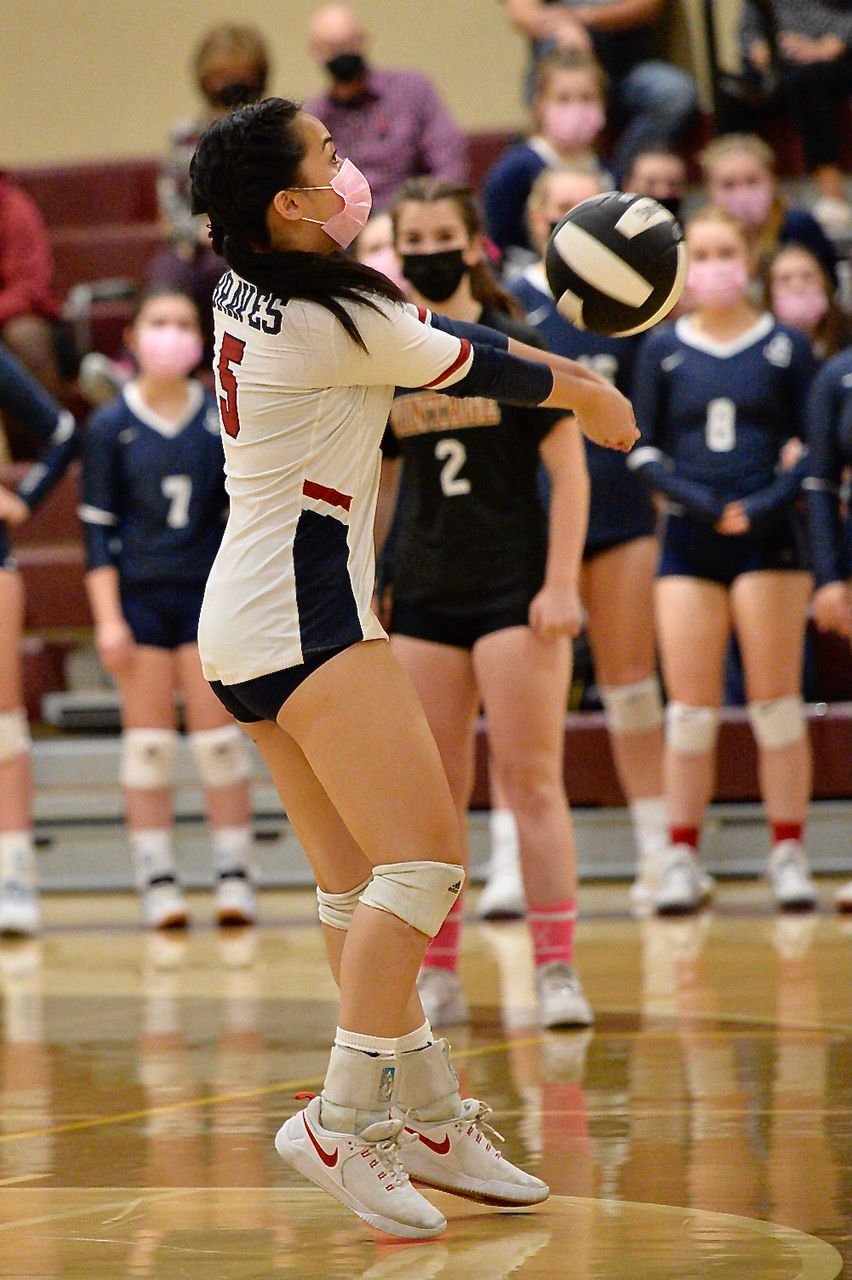 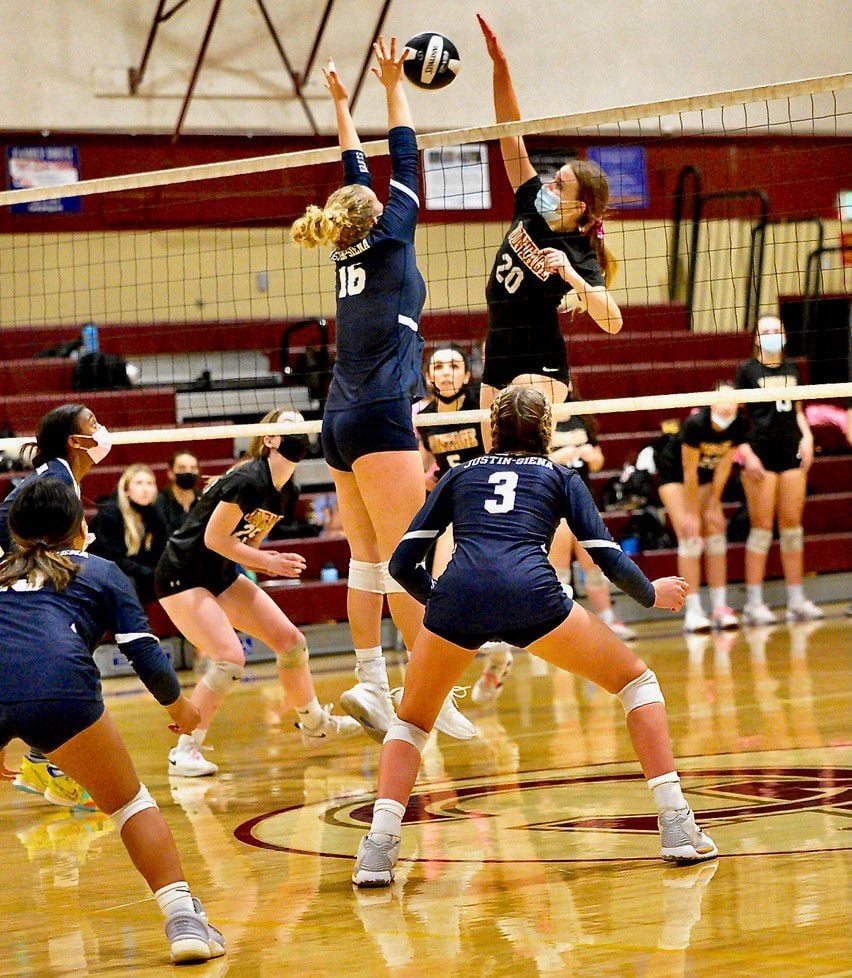 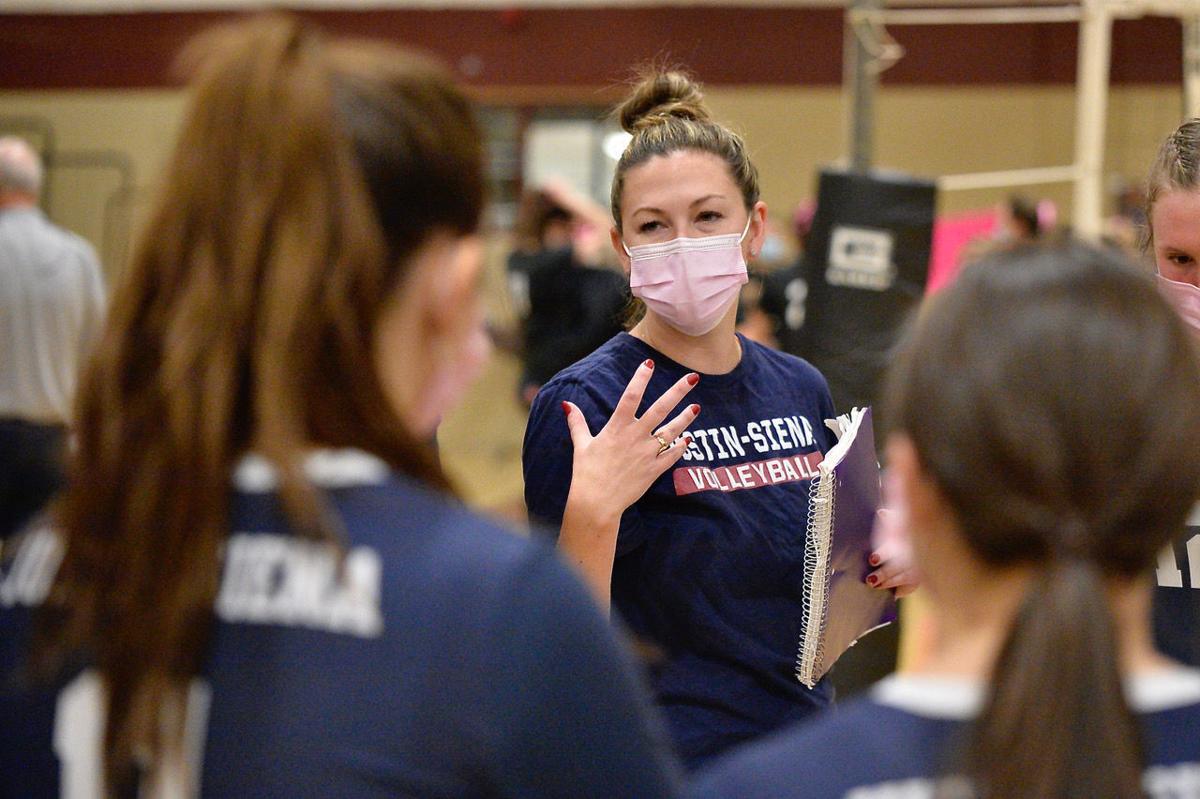 Justin-Siena head coach Kate Reilley talks to her team during a timeout at Vintage on Wednesday night. 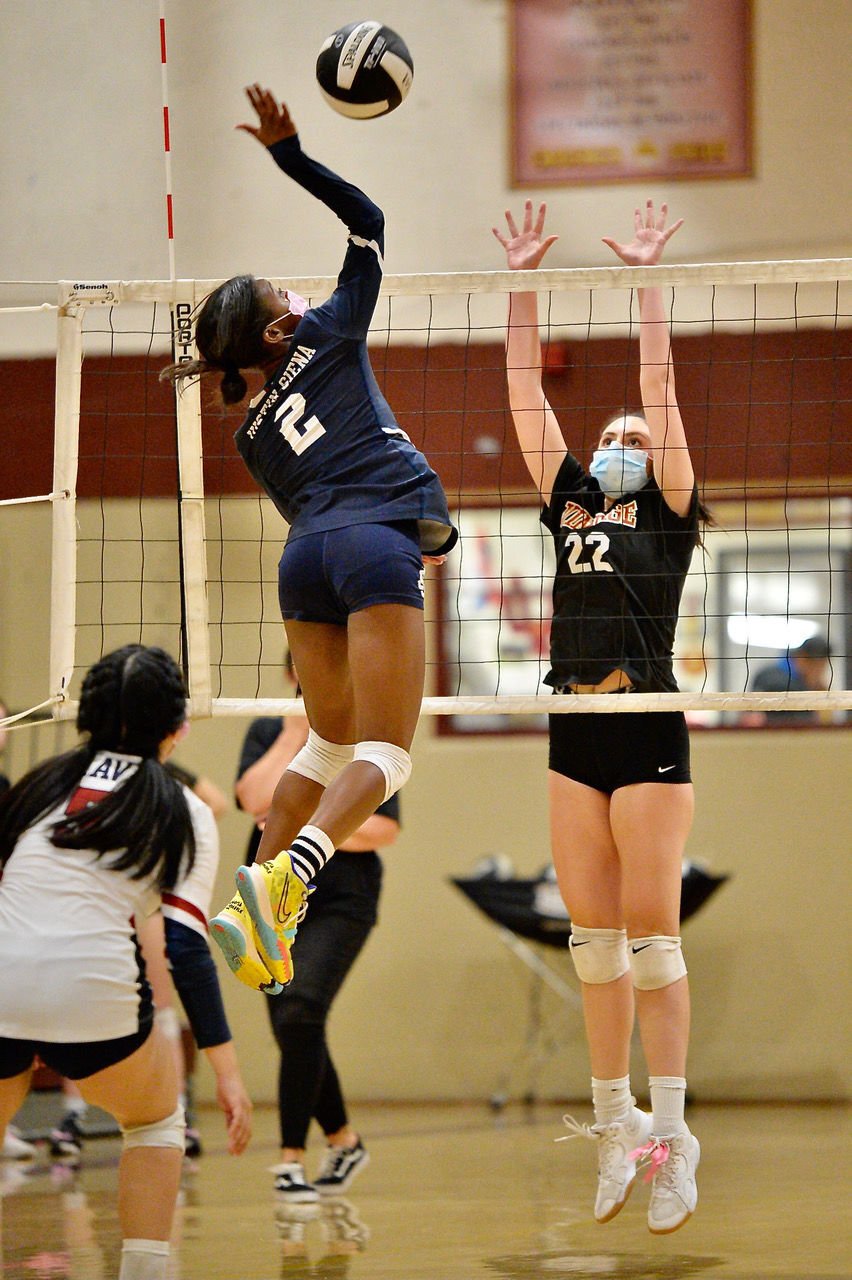 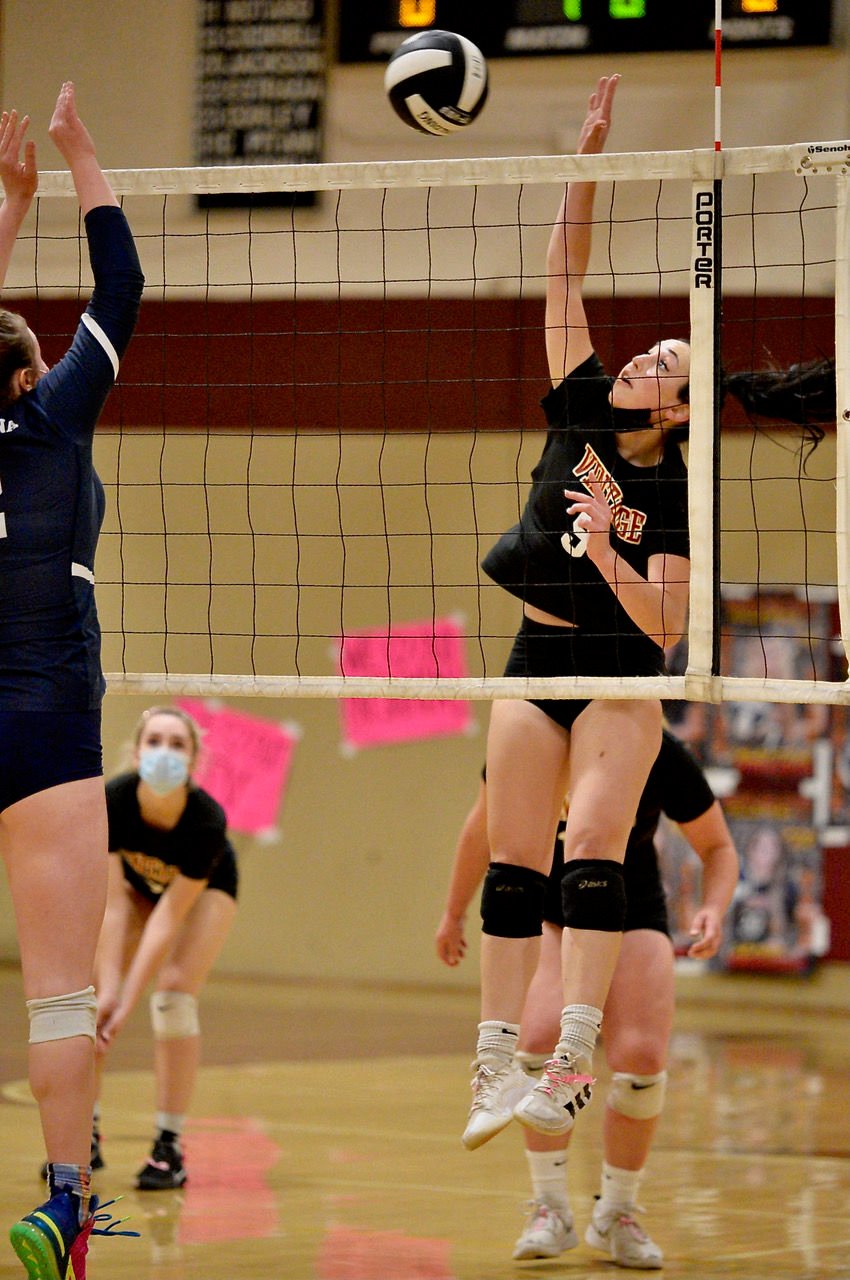 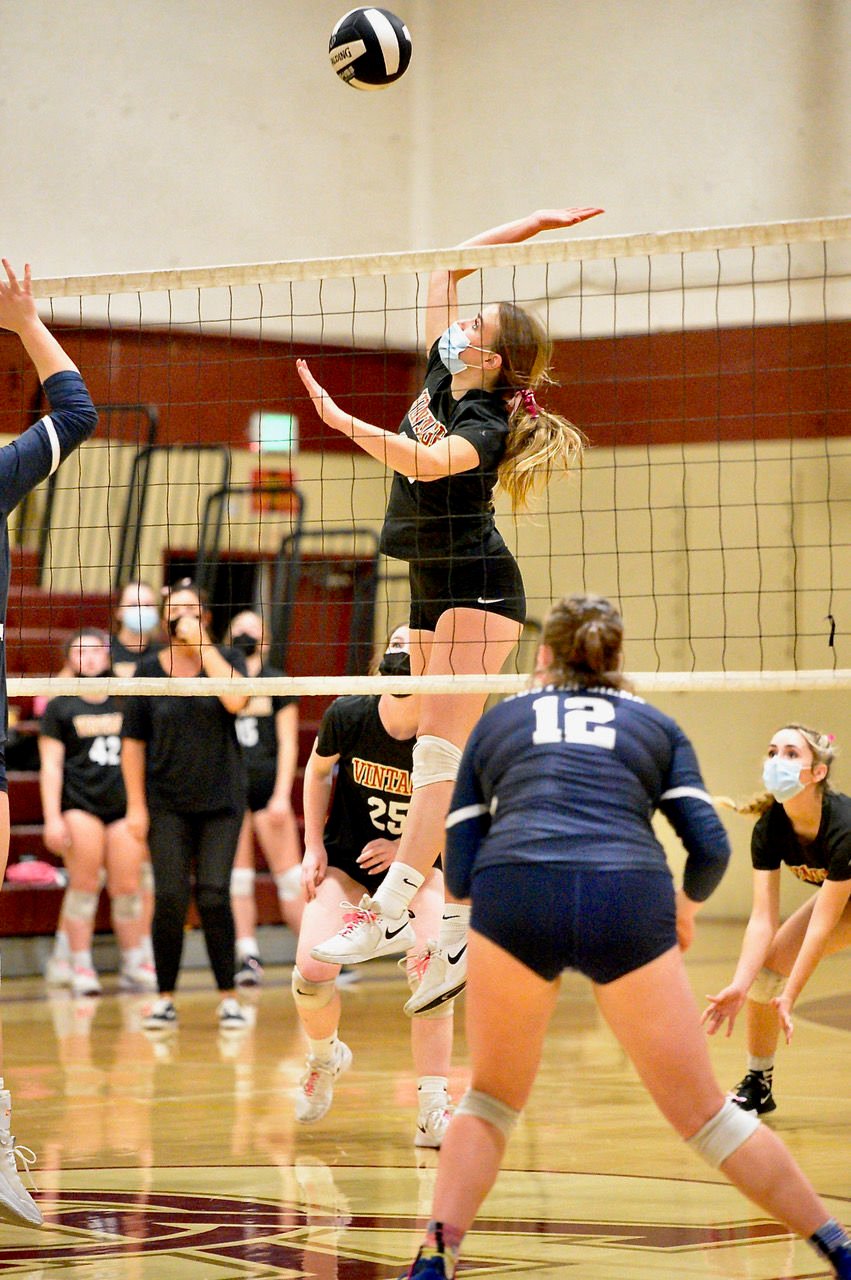 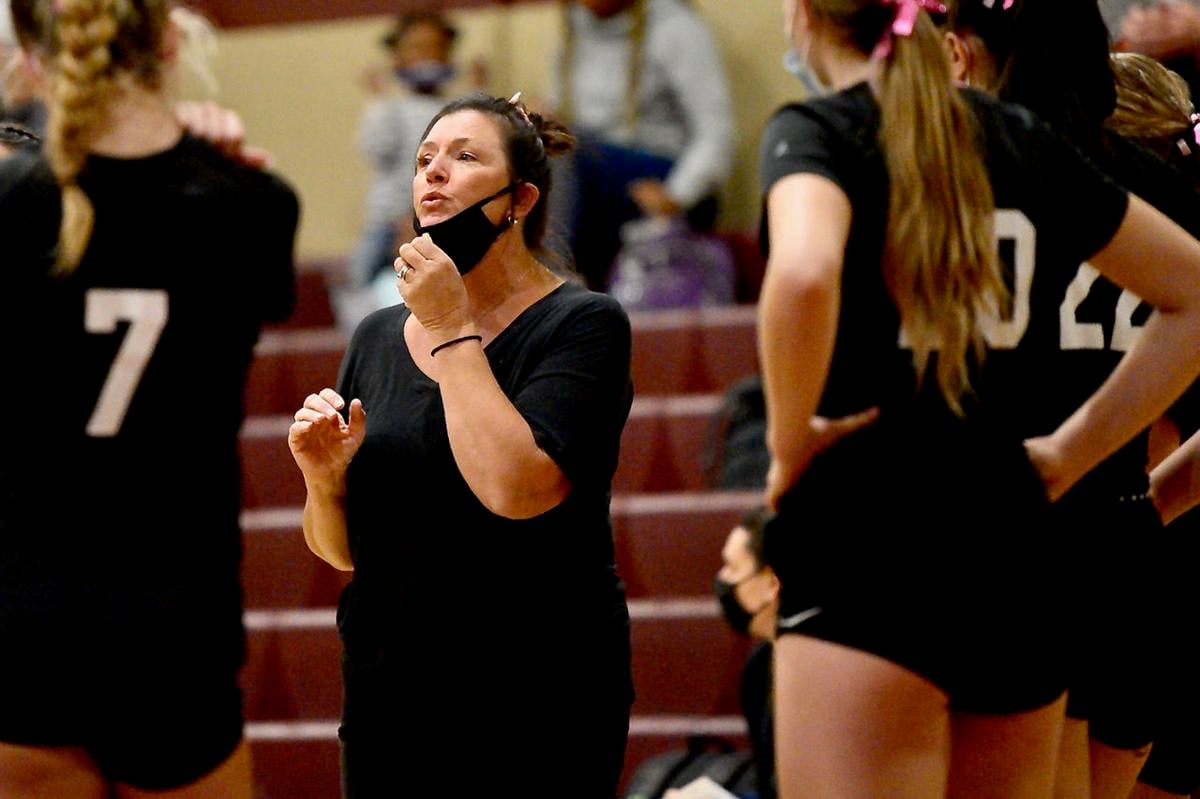 Vintage head coach Kelly Porter talks to her players during a timeout in Wednesday night's match against visiting Justin-Siena. 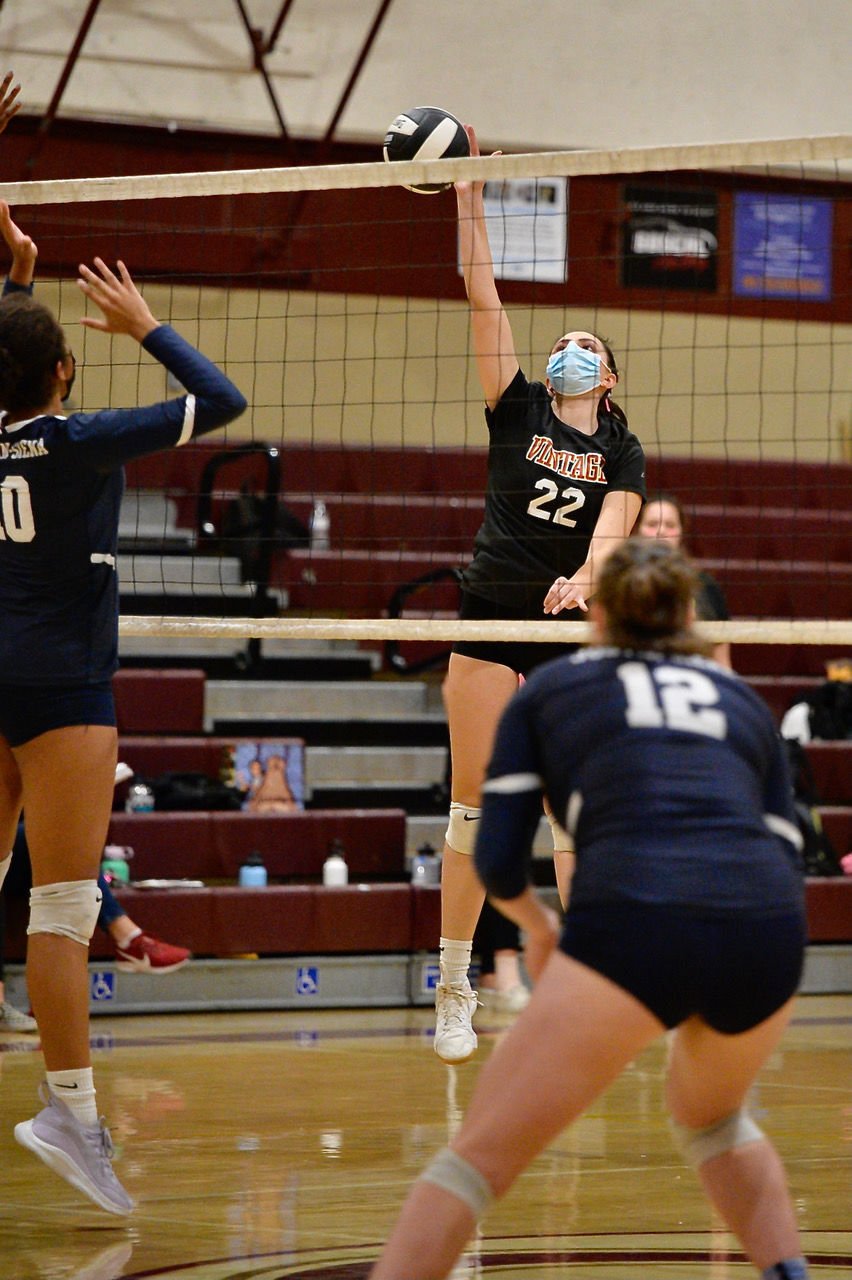 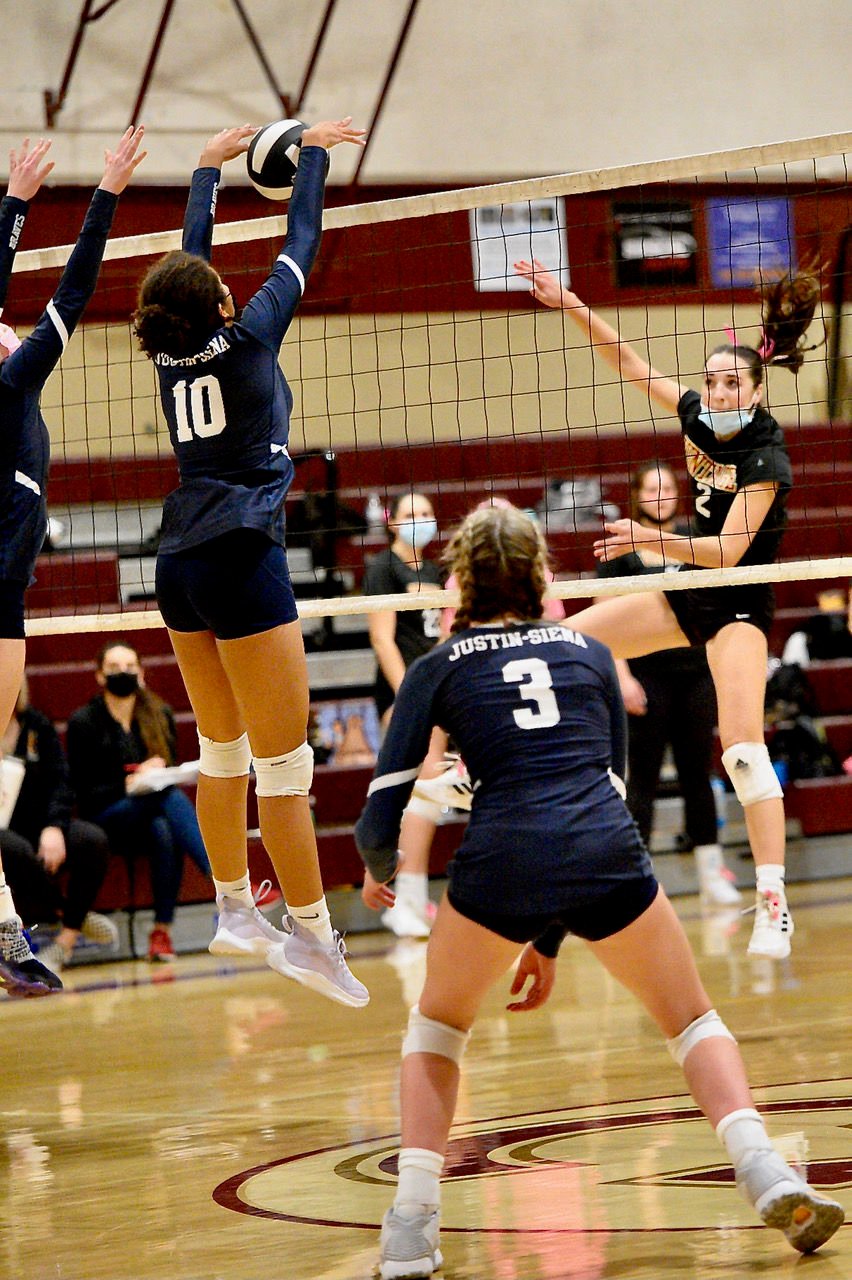 The top two volleyball teams in the Vine Valley Athletic League battled it out Wednesday evening to determine who would head into the second go-around of league play as the title frontrunner.

“I'm so proud of these girls,” said Braves head coach Kate Reilley. “I feel like we've been building to this moment the entire season and we've been anticipating a couple tough matches against Sonoma and against Vintage this year.

We've had a couple teams surprise us so far so, of course, it’s nerve-wracking when you go down right off the bat. But I had every confidence in the world that they would come back. I knew how much they wanted this game and I knew how much they prepared for this game, and once we kind of got back in our rhythm, we just rolled with it from there.”

It was a passionate environment inside the Vintage gymnasium, as both student sections were active and chirpy all evening. The Crushers had easily handled Casa Grande in Petaluma the night before in straight sets, while the Braves had just come off a draining, close battle with fourth-place Sonoma Valley at home on Tuesday and had a trip to Casa Grande coming up Thursday night.

The hosts took advantage of some communication errors by the visitors from the other end of Trower Avenue to take their early lead.

“It’s always scary going into someone else's gym. You never know what you’re gonna get,” Reilley said. “You never know what the court’s gonna look like, what the fans are going to look like. One thing that we make sure we do is we prepare for every game the same way. We come in like we're playing in our gym. We take care of business like we're playing in front of our home crowd. I think they did that tonight. They love to feed off the energy of the crowd, and we were really lucky to have a very local rivalry that we could very easily feed off of and use to our advantage.”

Vintage (12-5, 7-1 VVAL) stretched its lead to 8-3 behind quality strikes from outside hitter Maria Bodor. Maddie McPhee picked up some key points while serving for the Crushers during the set and was a solid weapon all evening. The Braves slowly chipped away at their deficit until they had tied the score at 18-18, but Vintage finished on a 7-3 run to take the set.

Justin-Siena (10-4, 7-0 VVAL) shook off the slow start by cutting down on their mistakes and took control at the net for most of the remainder of the match. Senior captain Eleanor Meyers was a force, blocking some of the harder shots Bodor could send at her.

Another name to watch out for in the future will be Jordan Washington, the freshman who in tandem with Meyers made an impressive blocking wall for the Braves. Washington was a focal point for many Justin-Siena chants, with the Vintage student section reacting with a collective group shrug. Washington finished with 9 terminal blocks and 6 kills.

“This win was really exciting, especially coming off of the win versus Sonoma yesterday,” Meyers said. “We have been waiting for this game (since) we didn’t get to play them last year, so it was especially good coming to their gym and winning and working as a team.”

The second set began the ascension for the Braves, as Vintage had the lead for only 3 points. Justin-Siena took the lead 8-7 and did not relinquish its advantage the rest of the set. The Braves grabbed a 21-14 lead and finished off the set with a 25-20 win.

Throughout the evening, one of the Braves’ hardest hitters was Anna Hanson. The sister of reigning Napa County Player of the Year Megan Hanson, now playing for UC Irvine, the sophomore could be a thorn in the side of VVAL opposition for years to come.

Hanson had a team-high 14 kills, while sophomore setter Ranessa Rualo had 27 assists and had 6 aces out of 25 serve opportunities.

“Ranessa kind of just never gives up,” Hanson said. “Even if she is hard on herself or even if she might mess up here or there, she is always there when you need her and she’s such a strong setter and an amazing person.”

Unexpected obstacles can always derail teams and in the age of COVID-19, this is especially true. Vintage was without two starters on Wednesday, one become of injury and another because of COVID protocols. This forced the Crushers to put some players into new positions, which naturally caused a couple of miscues and communication errors. In close sets, a few points would be the difference.

“I think it was a gut punch to not have all of our players here. That’s huge when you're missing two of your six starters. That's a devastating blow,” Vintage head coach Kelly Porter said. “But, you know, Justin-Siena played an awesome match. They really dominated the middle there and their middle game was on point. They were picking up all of our hits and we were trying to strategize to tip middle. It was working at times, but we didn’t stay with that. We were just a little out of sorts putting people in different positions.”

The third set was the closest and most intense of the four games, with the teams exchanging 11 lead changes or ties. For most of the set, a three-point lead was the biggest advantage for either side, with each team trading two-point swings back and forth. Vintage appeared to push for the key set victory, as the Crushers gained a 20-18 lead after a couple of hard-fought points.

The next few minutes would decide the match, as the Braves wouldn’t be stopped. Justin-Siena, fueled by its raucous cheering section, had its second longest run of the evening as it scored seven straight points to snatch the third set, 25-20.

“I think this win was really huge because it kind of showed how strong of a team we are, and I think we’ve worked really well together when we’re under pressure,” Hanson said.

Hanson, a Sonoma resident, also had an emotional match the night before at Sonoma Valley.

“(On Tuesday) we played such an energy-draining game, so I think we came in a little tired,” she said. “But we told each other that we were going to be able to come out of this and finish strong. So I was really proud of us, because that’s really cool to be able to do.”

The momentum the Braves were building during the second and third sets turned into an avalanche during the final frame. Vintage was within 9-7 after some solid play by senior Madisyn Flohr. But point after point, Justin-Siena scored until victory was certain. When the dust of the rally settled, the scoreboard read 19-7 and the Justin-Siena players were dancing on the court to the timeout music. Vintage continued to battle, but the Braves finished off the set a couple minutes later by a score of 25-15.

“We were expecting people that haven’t really played those positions in games to (play better, since) we do it every day in practice,” Porter said. “But with this crowd and the momentum swings from ebbs and flows, that definitely kind of got us a little bit out of whack. Again, not taking anything from Justin. They played a great match against us and they took it tonight. We’ll be coming back in the next round and hopefully we can turn the tables.”

Justin-Siena will take on Napa next Tuesday, while Vintage travels to Sonoma Valley.

When a team gets all of its running backs involved, it can be trouble for the opponent. That was the case Friday night when visiting Vintage r…

Grizzlies score 5 TDs but get routed by Casa Grande, 70-34

The Napa High girls golf team shot a 308 on Silverado Resort and Spa’s South Course, but needed only to have a full team to win as visiting So…

Justin-Siena sophomore Reagan Brumfield (2) winds up for a kill attempt as Vintage's Caitlin Kenney (22) looks to block it Wednesday night.

Justin-Siena head coach Kate Reilley talks to her team during a timeout at Vintage on Wednesday night.

Vintage head coach Kelly Porter talks to her players during a timeout in Wednesday night's match against visiting Justin-Siena.