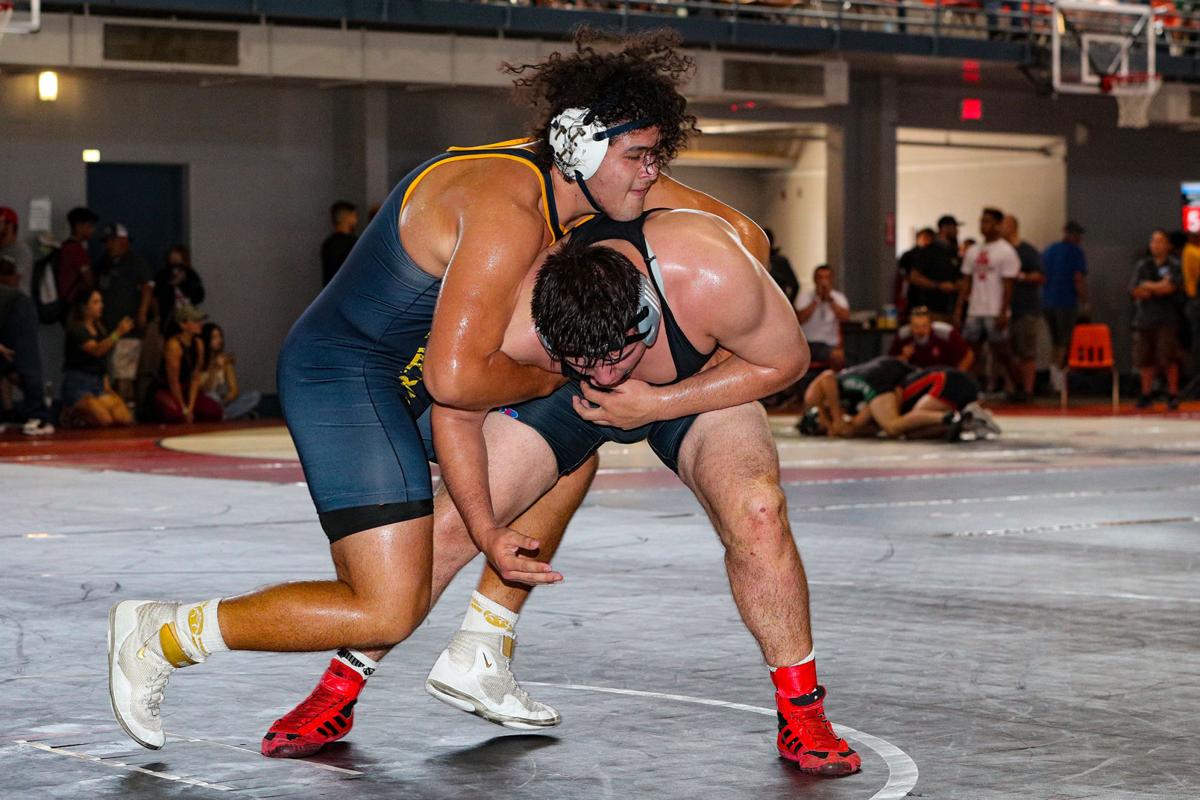 Napa High senior Cole Lex, left, tries to take down Centennial’s Isaac Lopez during the second overtime of their match Saturday in Fresno. 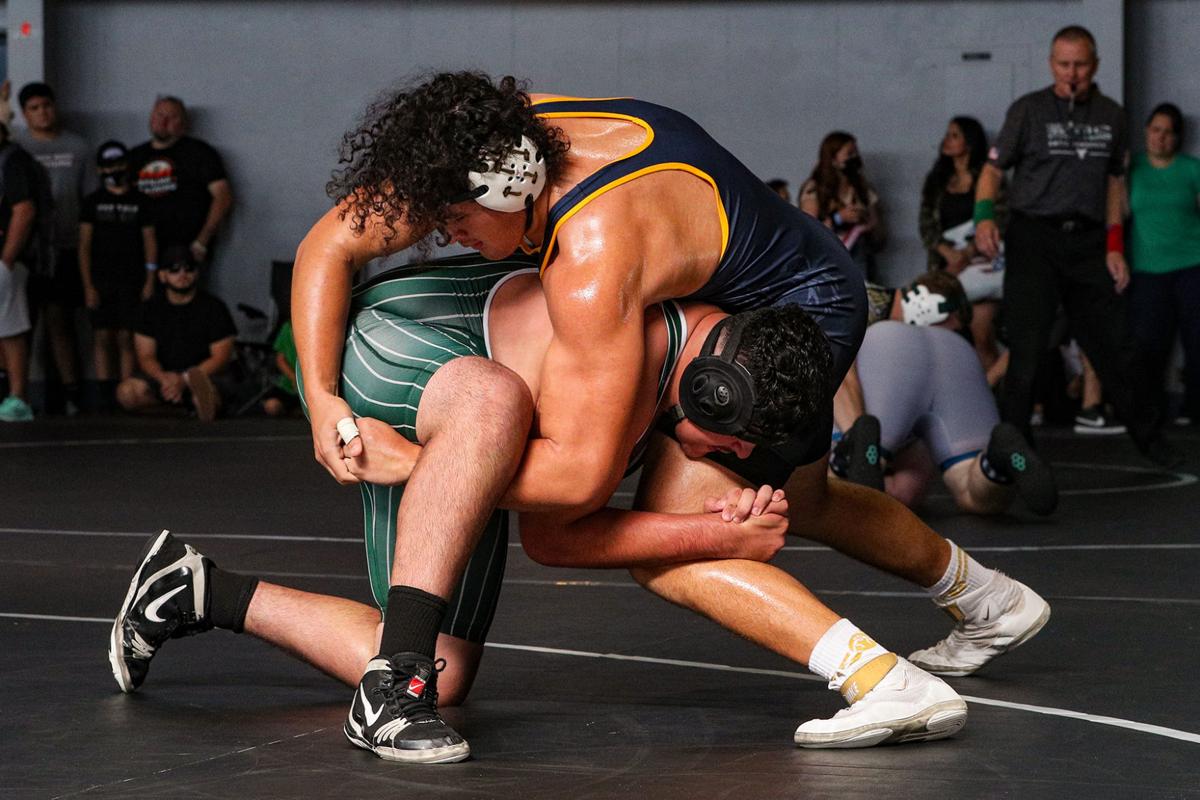 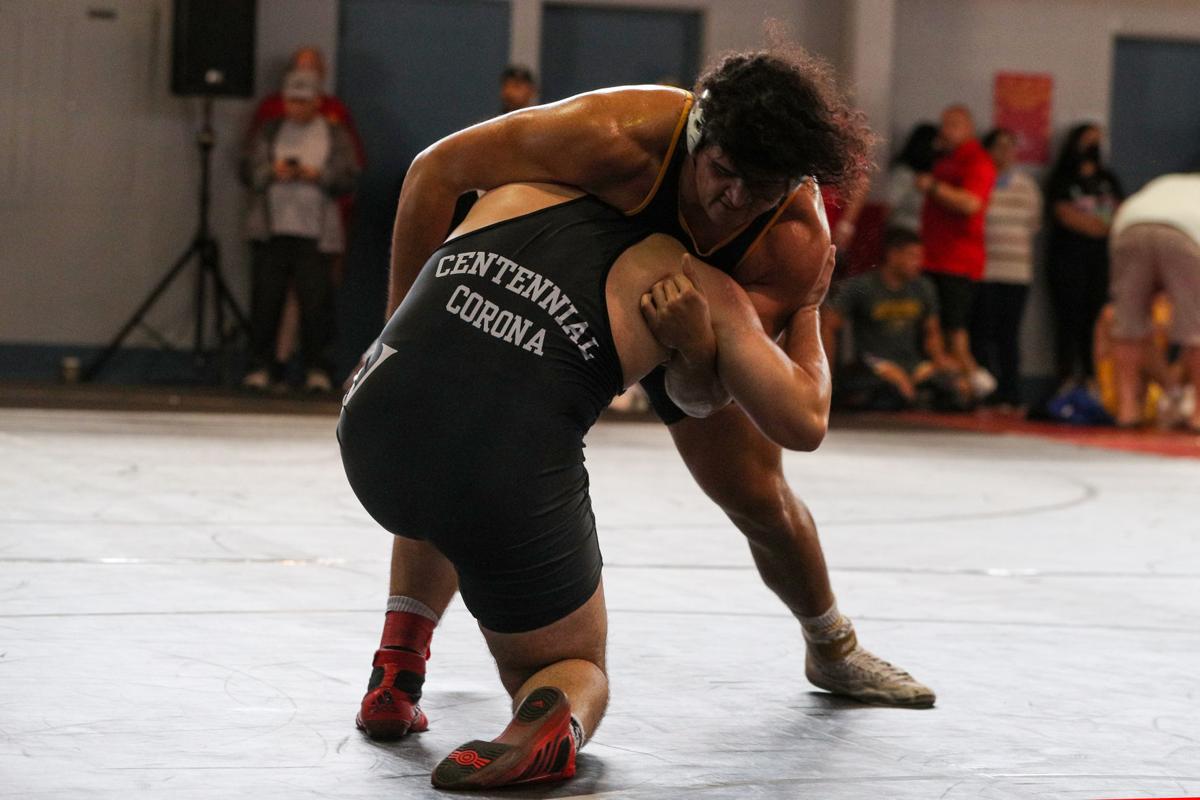 Napa High's Cole Lex, right, defends against a shot from Centennial’s Isaac Lopez in his fourth and final match of the two-day California State Finals on Saturday morning in Fresno. 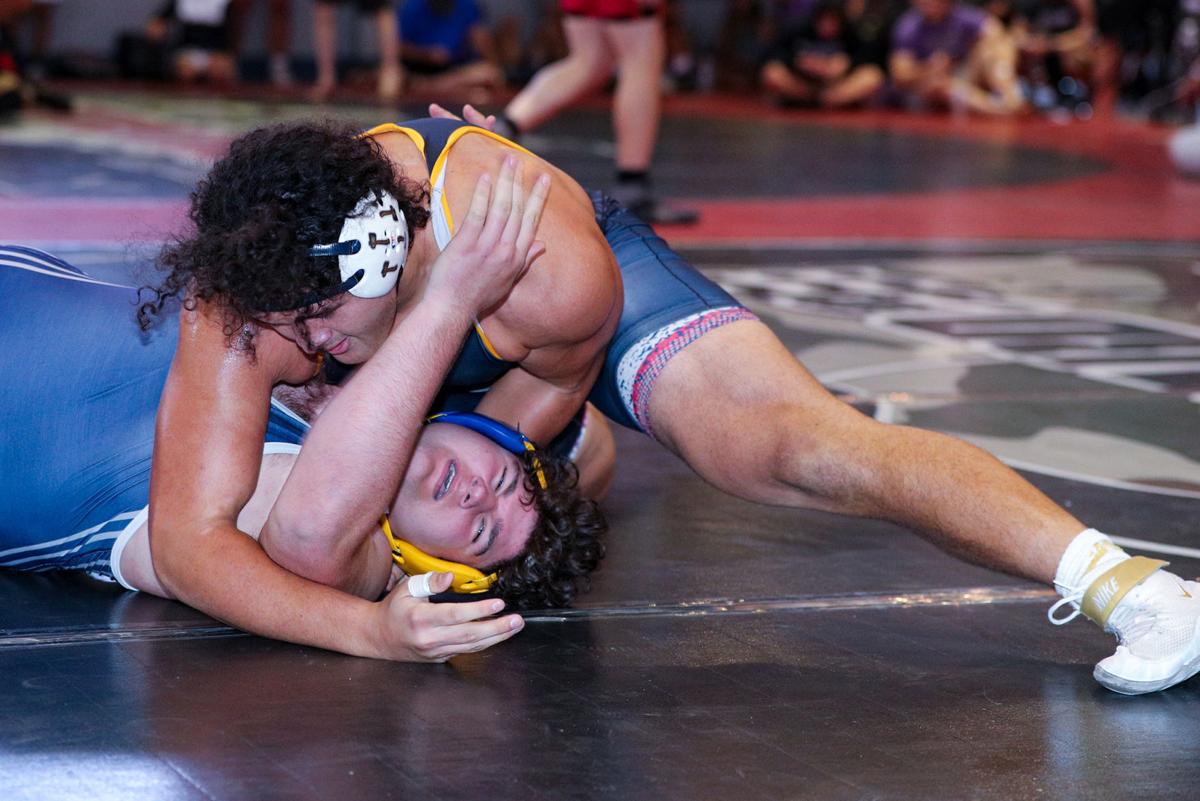 Napa High senior Cole Lex, top, turns Santa Monica's Vincent Shahriary in the second period during a 2-1 consolation-bracket win in his second match of the California State Finals Invitational in Fresno on Friday. 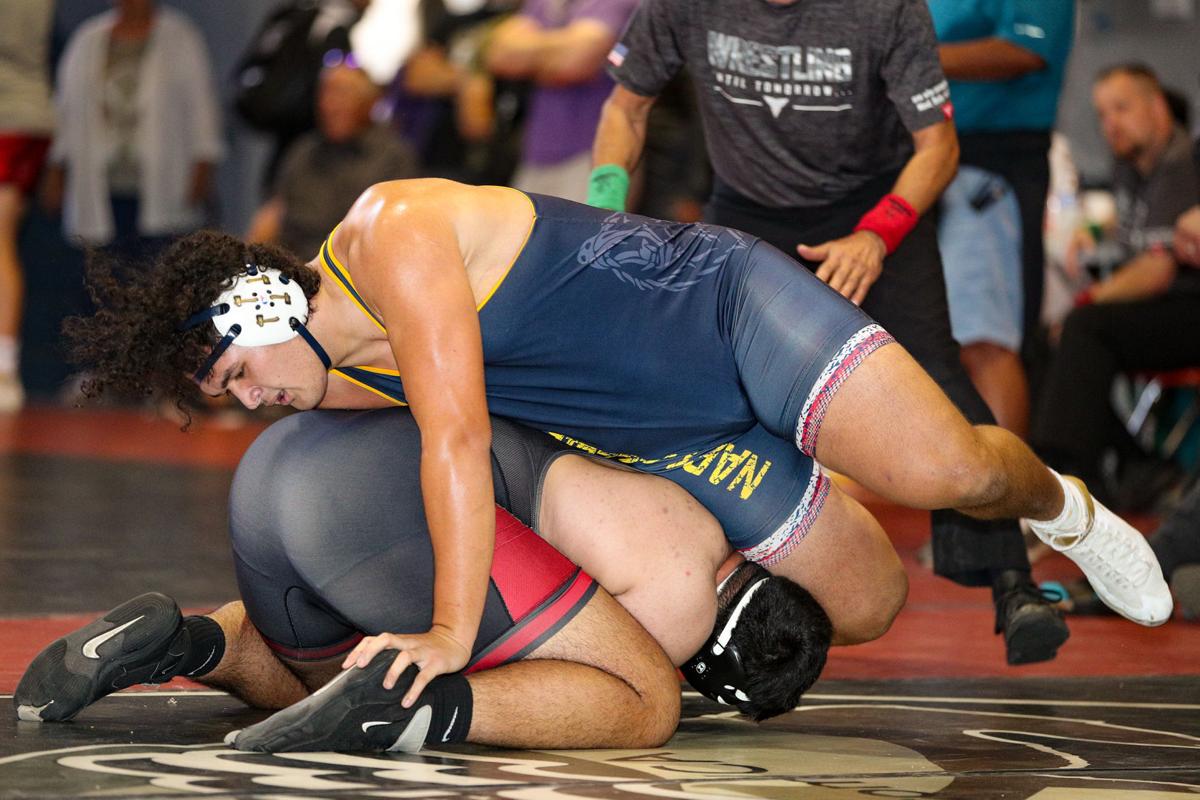 Napa High senior heavyweight Cole Lex didn’t need those steps to qualify for the California State Finals Invitational in Fresno, an unofficial two-day state tournament organized for only the top wrestlers in the state after the Vine Valley Athletic League, North Coast Section and California Interscholastic Federation had been forced to cancel their official meets because of the COVID-19 pandemic.

Lex was invited based on his 2019-20 junior season, which saw him barely miss a top-three state berth with a fourth-place finish at the NCS Championships, and this year, when he won all five of his matches with first- or second-period pins — one each against league foes American Canyon, Petaluma and Casa Grande, and two in a nonleague meet against Wood.

Those five matches probably gave him six or seven minutes of mat time in meets. He got a lot more competitive time on the mat while training with 220-pound teammate Marco Saldivar during league and with 197-pounder Thomas Hatton for this meet. But it was nothing like the 26 minutes he wrestled in two matches on Friday and two more on Saturday.

Lex opened with a 3-1 loss to Clovis West’s Joseph Alaniz, but stayed alive with a 2-1 squeaker over Santa Monica’s Vincent Shahriary. On Saturday, he won 4-0 over Canoga Park’s Amin Toledo, before losing 2-1 in overtime to Centennial’s Isaac Lopez.

Lopez ended up placing third and Alaniz seventh to win medals, but the long drive was just as satisfying for Lex and his 2-2 faring.

“I hadn’t had a single match go past three minutes, so the matches this weekend were a very nice change of pace,” Lex said. “In the last four years, I’ve never had an overtime match, let alone a double-overtime match, so it was fun to end the season on something different.

“With the tournament not being a CIF-sanctioned event, some of the rules changed — with a specific one being no mandatory waiting period after a match of around 40 minutes. So I had my first match go six minutes and then exactly 13 minutes later, I was on the mat again, heart still racing from the previous six minutes, with this one going the distance as well.”

Fortunuately for Lex, he had just enough to pull out that 2-1 win and advance to Saturday. In his finale, the first overtime was “sudden victory,” meaning the wrestler with the first takedown would win. When neither could pull that off, they went to another extra period — a 30-second one they had to complete. Lex appeared to have a 2-point takedown in the second OT, the referee even signaling it, but it was waved off. Lopez eventually won by scoring a 1-point escape from the bottom position in the final seconds.

“In league, I knew my competition would be limited due to a multitude of circumstances — like kids playing other sports, previously graduating seniors, and some just not choosing to wrestle — so it was fun to get to see the best of the best in one place and compete against them.”

After excelling on the offensive line in football and on the mat for four years each, Lex — an excellent student on top of all that — will focus on academics as he heads to the University of Arizona in Tucson in the fall.

He never even planned to play sports in college, actually.

“I always tried to navigate my sports seasons so I could optimize the experience while having fun instead of having to look exceptional in front of college coaches,” he said. “I’ve seen plenty of college-caliber wrestlers — specifically Stanford wrestlers, and CSU Bakersfield wrestler Hunter LaRue (a Napa High alumnus) and they are the one-percenters who are just phenoms in their sport. I’m not among that group and I recognize that, so I am pursuing my future with the intent of academics at the forefront. I’ll experience Division 1 athletics in college as a spectator.

“All in all, the season exceeded my expectations tenfold and I’m so grateful for all of those that helped me to get to where I’m at today. I can’t wait to come back and watch how the next group of wrestlers take on their future seasons — especially Thomas Hatton, who has proven he is a force to be reckoned with and is a clear state contender for next year.”

Ryan Mooney, who graduated from Vintage High School last month, recently signed a letter of commitment to continue his lacrosse career with Sa…

Reagyn Shoop, a 2021 Vintage High graduate, didn't let the COVID-19 pandemic keep her from realizing her dream of running track in college.

Napa Valley Teams Remembered: Napa's 1988 champions played for each other

Coaches and players from the 1988 Napa High baseball team look back on how they won their school's first-ever section championship in any sport.

Players and coaches from the Napa High's 1988 Sac-Joaquin Section Division I champion squad remember the late Scott Ruggiero and how he was a role model on and off the field.

Napa High senior Cole Lex, left, tries to take down Centennial’s Isaac Lopez during the second overtime of their match Saturday in Fresno.

Napa High's Cole Lex, right, defends against a shot from Centennial’s Isaac Lopez in his fourth and final match of the two-day California State Finals on Saturday morning in Fresno.

Napa High senior Cole Lex, top, turns Santa Monica's Vincent Shahriary in the second period during a 2-1 consolation-bracket win in his second match of the California State Finals Invitational in Fresno on Friday.