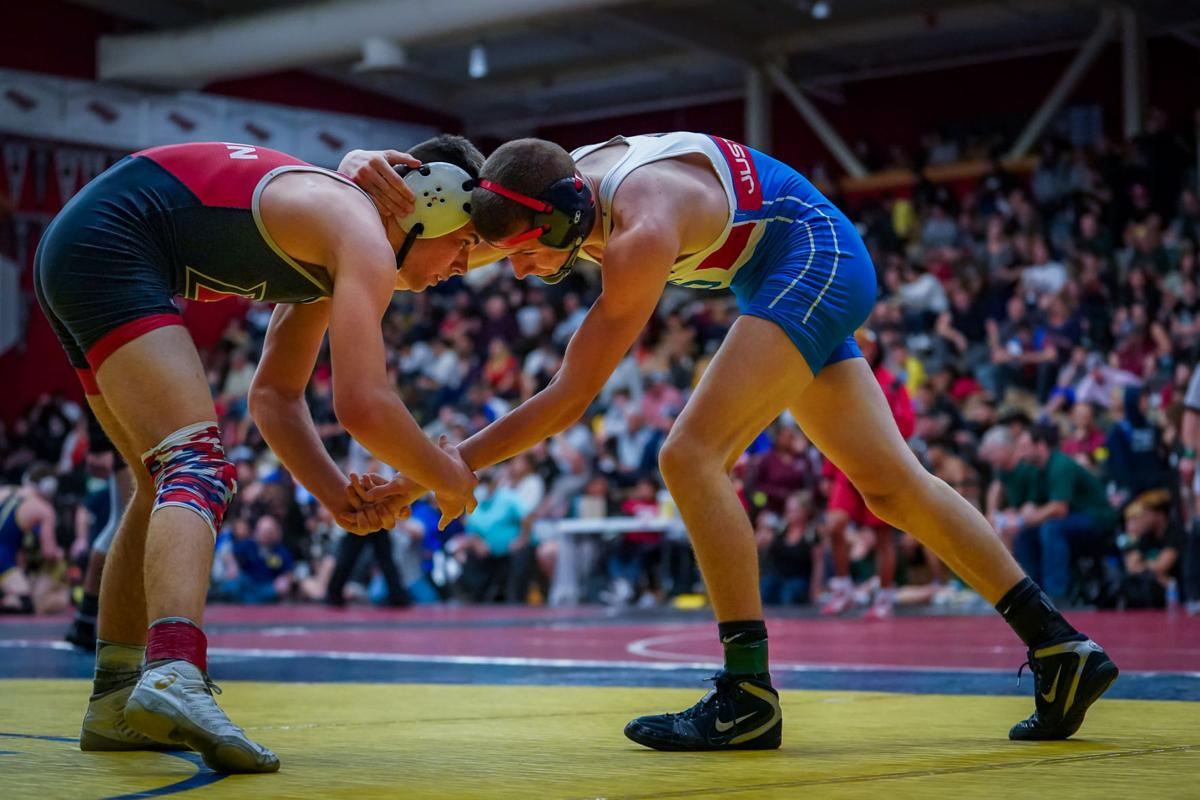 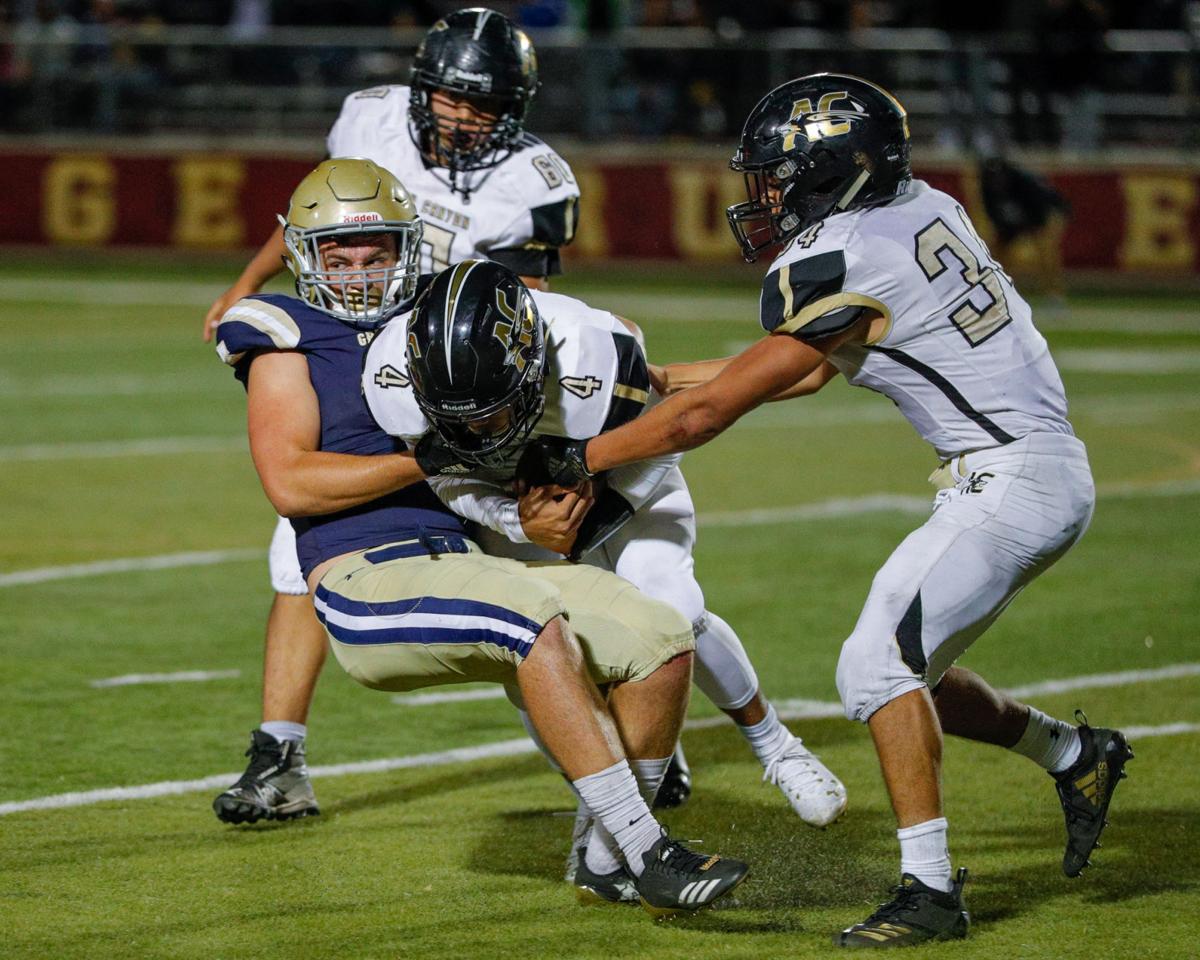 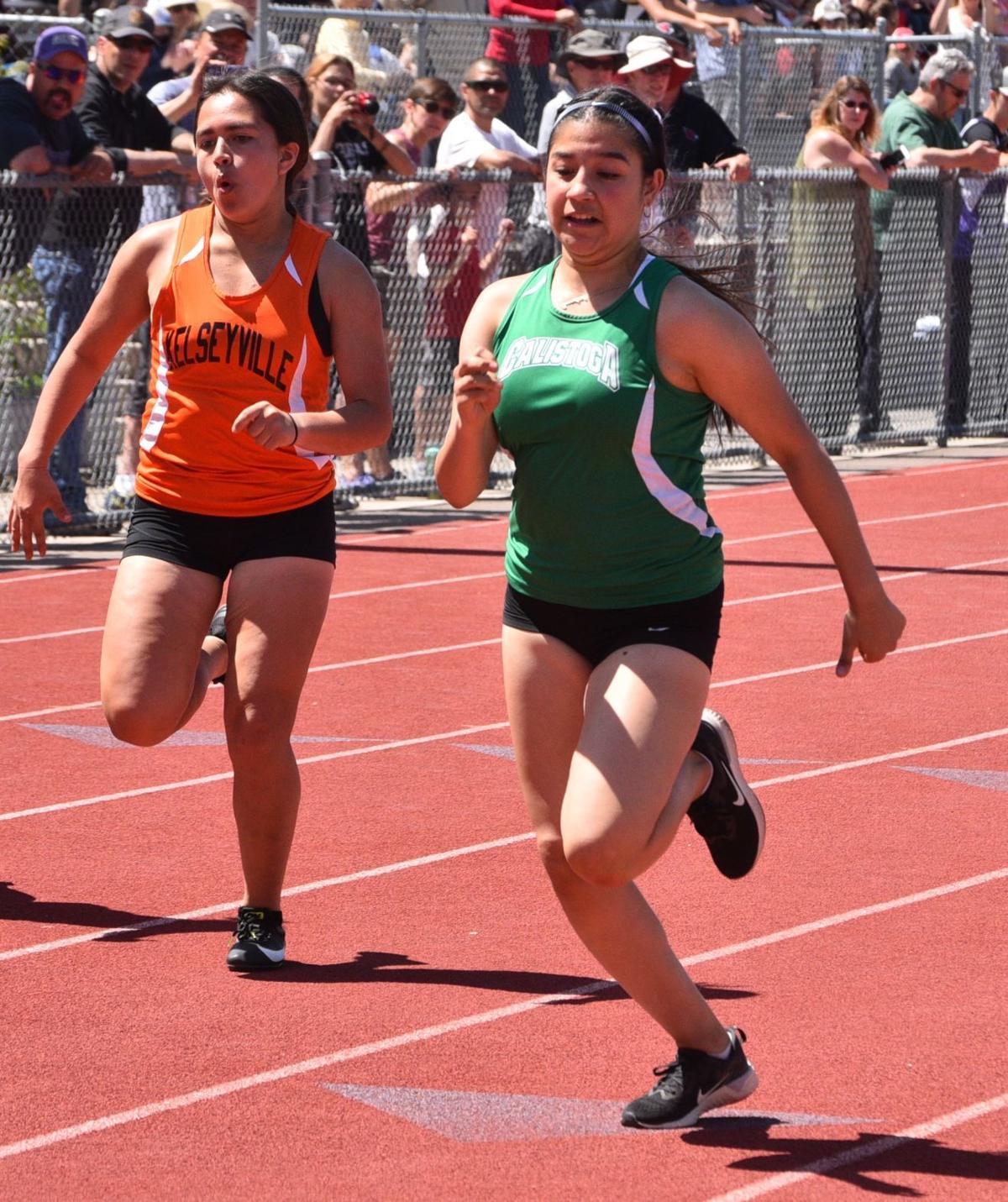 Calistoga's Erendira Robledo competes in the 100-meter dash at the Coastal Mountain Conference Championship track and field meet at St. Helena High in May 2019.

Guiducci is a three-sport athlete who uses his running sports to stay in shape for wrestling. With the COVID-19 pandemic still going on, though, he might not be wrestling anytime soon.

He had a strong finish to his last cross country regular season on Nov. 16, 2019 with a 12th-place and personal-record time of 17 minutes, 14.4 seconds on the 3.05-mile course at Spring Lake in Santa Rosa. It was the last of four Vine Valley Athletic League meets and counted double the points of the other three.

Guiducci went on to place 90th out of 198 runners in the Division 5 boys race at the North Coast Section Championships at Hayward High on Nov. 23.

He would also return to the section championships in wrestling during the winter. Competing in the 132-pound weight class, he wrapped up a 32-10 season with a 2-2 faring, getting tough draws in his third NCS Championships Feb. 21-22 at James Logan High in Union City.

He pinned his first foe in 2:20, but then dropped a 5-2 decision to the eventual runner-up. He bounced back with a first-round pin and an 11-5 decision, before getting pinned in 2:58 by the eventual fourth-placer and eliminated.

It was Guiducci’s third trip to the NCS meet in his brutal weight class, where he’s hoping to crack the top three this season and finally qualify for the state meet.

It was the first time Guiducci and his brother, freshman Brandon Guiducci, were on the same high school team, though the two have wrestled together for many years with the Napa Sheriff’s Activities League club. For Jason Guiducci, who co-coaches the Braves with Jesse Ward, it was a dream to coach both of his sons in high school at once.

“It is great having them on the same team once again, for many reasons,” said Jason Guiducci, who has also coached the Springstowne Wrestling Academy of Vallejo for more than two decades. “As coaches it makes our jobs easier, as their experience is something their teammates can rally around. On a personal level, it is fulfilling to finally be able to coach them, to spend time with them. Many years have been spent coaching hundreds and hundreds of kids. It is a gift to be able to share this time with my sons.”

Jacob returned to the track team late after another deep wrestling postseason and was able to compete in only one meet, on March 11 at Casa Grande. He beat all of the visiting American Canyon runners in the 1600 meters and 3200 meters at the three-school event.

Giguiere has been a varsity starter for two football seasons now. Having made the All-Vine Valley Athletic League Second Team as a sophomore linebacker, he was one of a select few who played on both sides of the ball when new head coach Richie Wessman brought in a platooning system last year.

He was an end and linebacker on defense last season, and a fullback, tight end and wideout on offense. He finished the season with 10 catches for 93 yards — including six for 69 in a playoff loss to eventual state champion Clayton Valley — and five carries for 41 yards.

“He grew so much last season and he’s got so much potential. I’m really excited to see what he can do this year and what he can put together,” Wessman said last week. “He is so valuable for us as a football team away from the ball.”

Giguiere has yet to score in a varsity football game, but Wessman anticipates that will change this season.

“Last year he didn’t get the ball as much as we’d hoped, but it wasn’t because he did anything wrong. It’s because we just had other guys who were making the plays. When you look at the Petaluma game, in 11 plays I think we scored seven times and when that happens, you don’t have a lot of touches for people,” the coach said. “But he’s done a great job and I anticipate he’ll have a great season. He just keeps growing and getting better, so I’ve got a lot of excitement to see what he can do.”

Gigiuere also plays basketball, having been a dominant scorer on the junior varsity team as a sophomore. He averaged 1.5 points in his first varsity season last year.

“Jack was the best player on the JV team last year,” then-head coach Zack Cook said before last season, “and will get a lot of playing time at the post this year. His strength and physicality inside will be a great addition to the varsity squad.”

Like many other sports at Calistoga this past school year, a majority of the girls soccer team was comprised of seniors. Robledo was one of only five non-graduating players on last year’s team, which will put her in line for a much larger role this next season.

Robledo was also one of five Wildcats selected to the All-North Central League I team. She and senior Lizbet Escobedo were both first-team selections for Calistoga, which went 8-5-2 overall and 4-3-1 in league play. The Wildcats made it all the way to the semifinals of the North Coast Section playoffs, defeating South Fork in the quarterfinals on penalty kicks, but ultimately fell to top-seeded Technology, 2-0. It was an encouraging bounce-back season for the Wildcats after they were unable to complete their 2018 season due to a lack of players.

Robledo has also been a member of the Calistoga track and field team for the past two years. As a sophomore, she competed in the 100, 200, triple jump, long jump and 4x100 relay. She finished seventh in the triple jump at the Coastal Mountain Conference Championships with a personal-best mark of 28 feet, 2.5 inches. She also anchored the 4x100 relay team to a fifth-place finish at CMCs and a seventh at the NCS Class A Meet.

She was able to compete in only one track meet this spring, the Big Cat Invitational at Santa Rosa High, and recorded marks of 15.81 seconds in the 100, 12 feet, 6.5 inches in the long jump, and 28-2 in the triple jump.

Calistoga's Erendira Robledo competes in the 100-meter dash at the Coastal Mountain Conference Championship track and field meet at St. Helena High in May 2019.