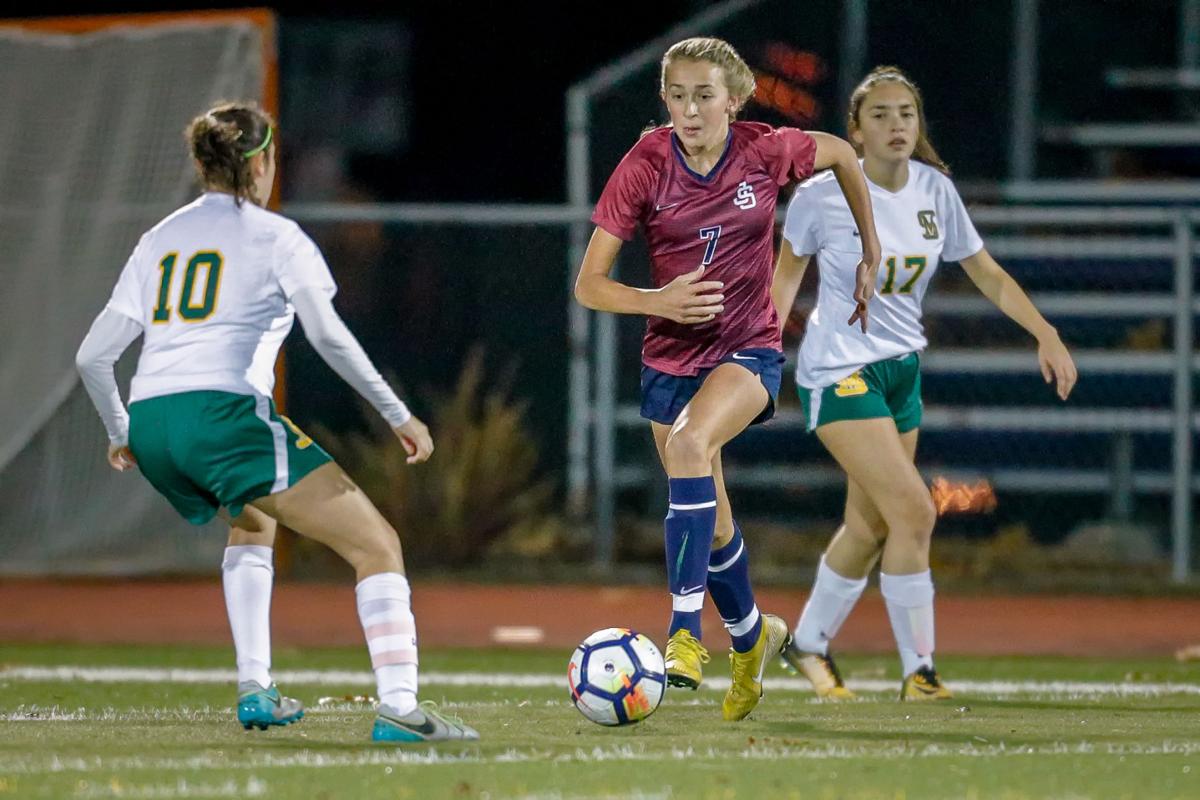 Justin-Siena's Tessa Salvestrin (7) moves the ball between San Marin defenders in the first half of a game in Dec. 2018. Salvestrin led the Braves with 15 goals as a freshman and scored 19 more her sophomore year. 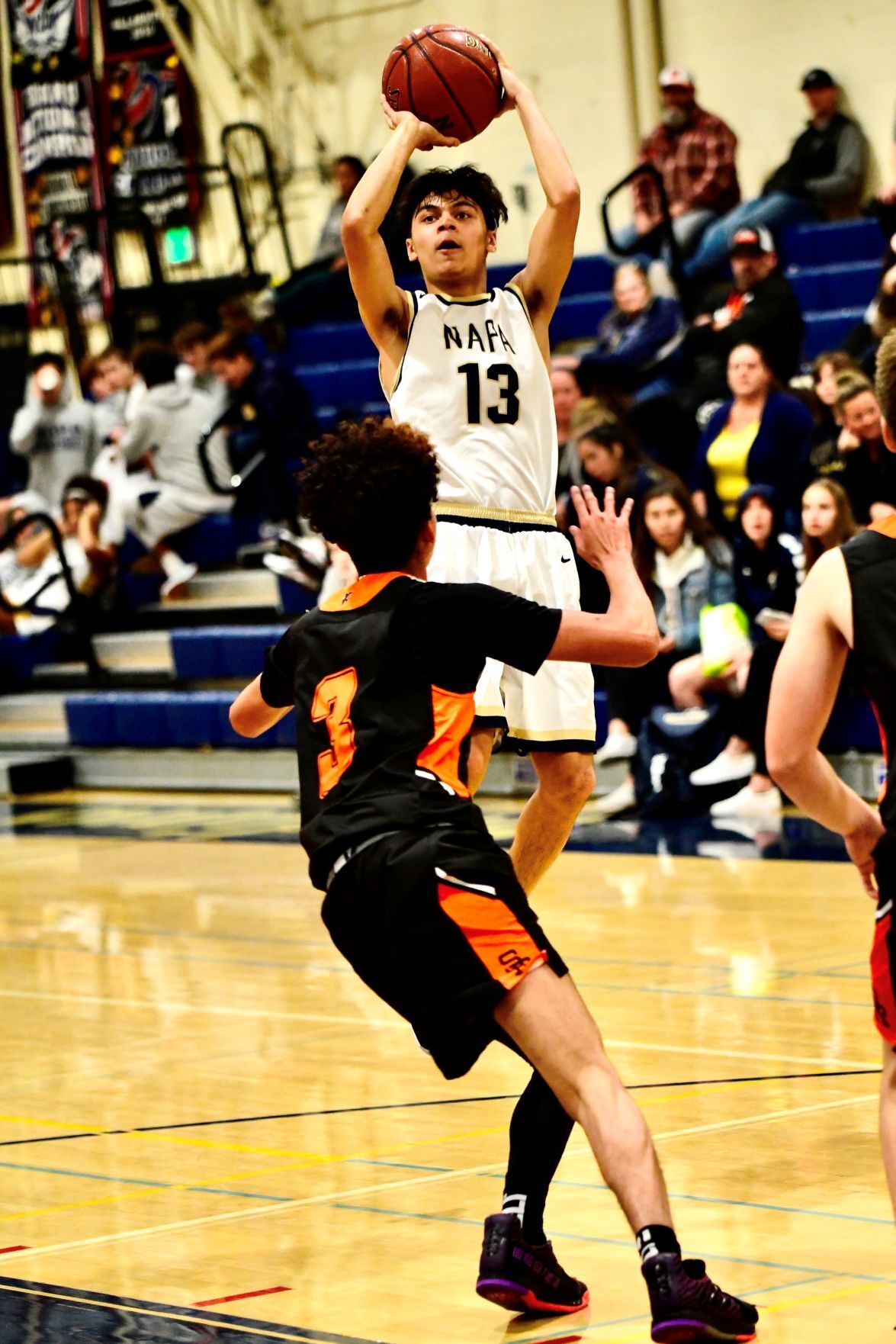 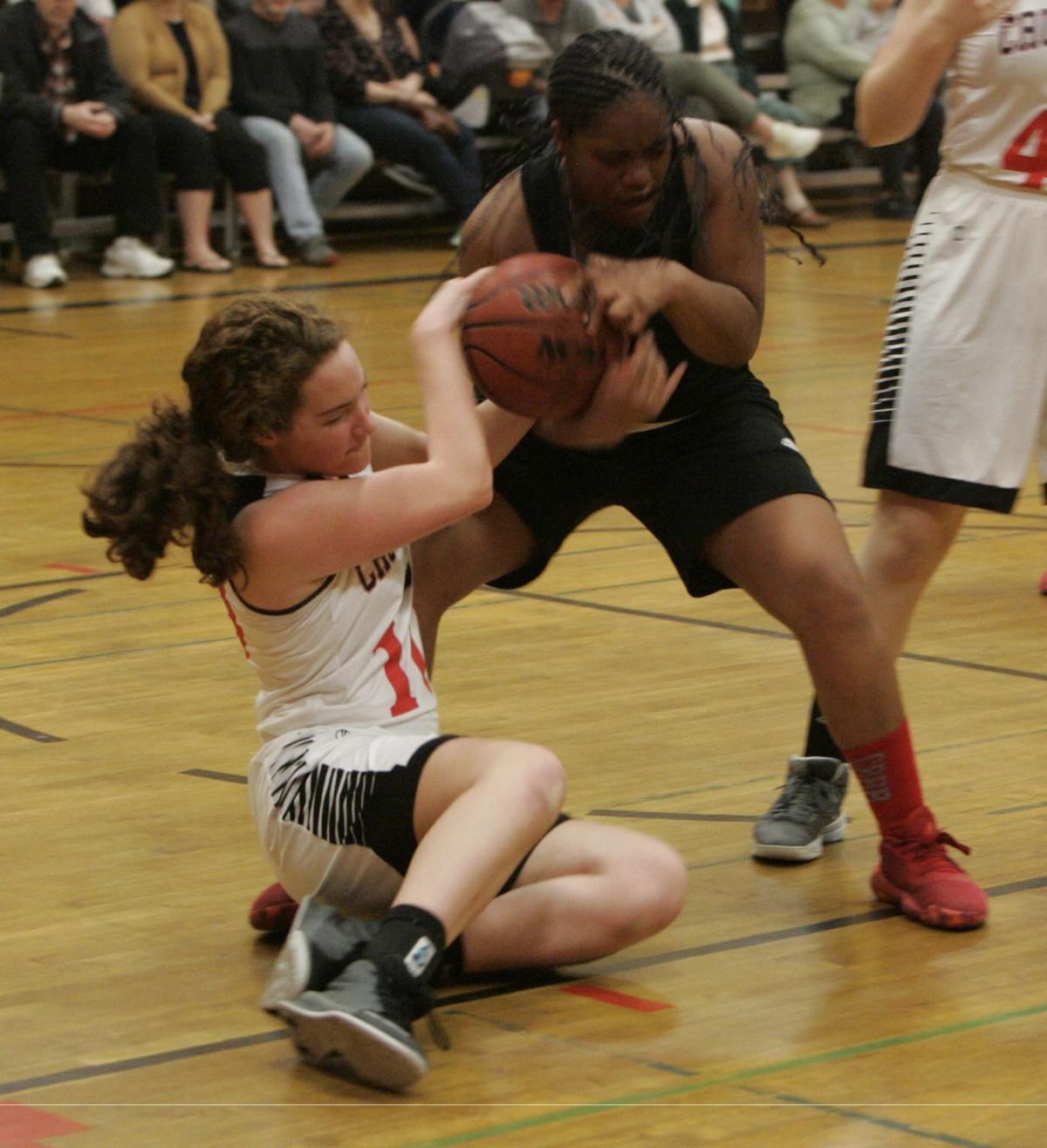 Salvestrin has been a shot in the arm for the Braves’ soccer program since joining the team two years ago.

In her two prep seasons so far, Salvestrin has scored 34 of the Braves’ 51 total goals, tallying 15 as a freshman and 19 as a sophomore. The Braves had scored just 12 goals combined in the three seasons before Salvestrin’s arrival.

Salvestrin, who has a long history of playing on competitive club teams, has twice been named a finalist for the Napa County Girls Soccer Player of the Year award and made the All-Vine Valley Athletic League First Team this past year. She also received Honorable Mention on the Prep2Prep 2019-20 North Coast Section Team.

While wins have still been hard to come by for the Braves, Salvestrin will be among the best returning players in the county and league for her junior season.

Salvestrin also went out for softball this past spring and was off to a torrid start before the COVID-19 pandemic hit. In five games, she was batting .722 (team-high) with 13 hits in 18 plate appearances with 12 RBIs (team-high), 8 doubles (team-high) and a home run.

Salvestrin has exceeded at whatever she’s put her efforts into so far. Don’t expect that to stop anytime soon as the rising star still has two years of high school competition left.

The point guard had a breakout sophomore campaign for the Grizzlies in his second season as a varsity starter this past winter.

He was second on the team in scoring with a clip of 10.2 points per game, on top of chipping in a team-high 3.2 assists per game. He also averaged 2.1 rebounds and 1.5 steals per game while shooting 43 percent from the field for the Grizzlies, who went 7-19 overall and 3-9 in the VVAL.

Oda was an honorable mention selection for the All-VVAL team and was a finalist for the All-County Boys Basketball Defensive Player of the Year award.

“Tyler was the point of pressure on our press and halfcourt defense this year. He was very well conditioned and barely ever came off the court,” said Zack Cook, who stepped down as Napa High head coach after the season to join the Napa Valley College women’s basketball staff.

Oda received more recognition in May when he was listed in an article by prep2prep.com titled “Up and Coming North Bay Hoops Stars.”

The Grizzlies will have a strong group of returners back for the 2020-21 season that should have them in the mix for the VVAL title. Alongside Oda, the Grizzlies are expected to return first-team all-league guard Brayden Greenlee and four-star football recruit Brock Bowers, who missed last season due to injury. All three helped the 2018-19 Grizzlies win Napa High’s first boys basketball title in 28 years.

Jurgens was a key piece for both Crusaders teams she played for last year.

She was a member of the girls soccer team that was able to return to competition for the first time since 2014. While limited stats are available, Jurgens was on record scoring a goal in Trinity Prep’s 3-3 tie with Leroy Greene Academy, the lone tie of their 3-9-1 season.

On the court, stats were also hard to come by but Jurgens did lead the team in scoring with 13 points in the Crusaders season-finale 47-42 loss to Alpha Charter. She also scored 9 points against Napa Christian and 6 points against John Adams Academy earlier in the season.

Watch now: How to properly wear and wash your cloth face mask

Justin-Siena's Tessa Salvestrin (7) moves the ball between San Marin defenders in the first half of a game in Dec. 2018. Salvestrin led the Braves with 15 goals as a freshman and scored 19 more her sophomore year.