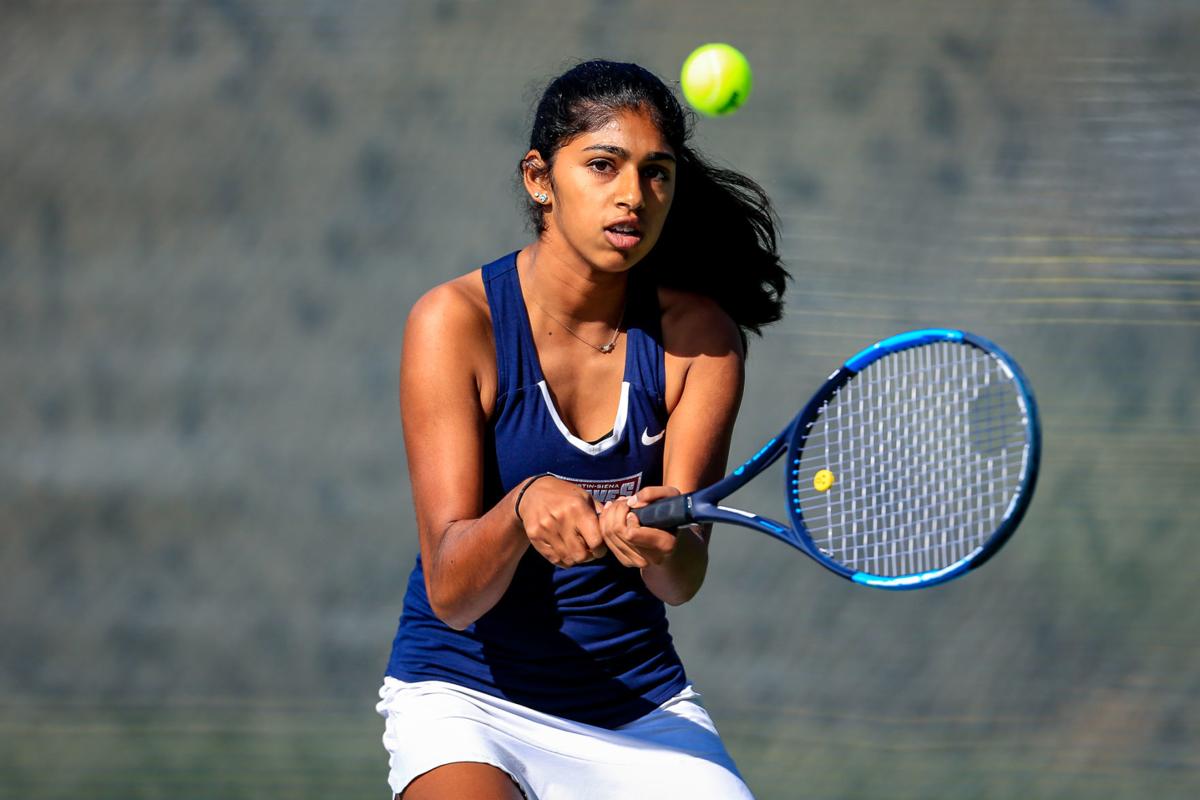 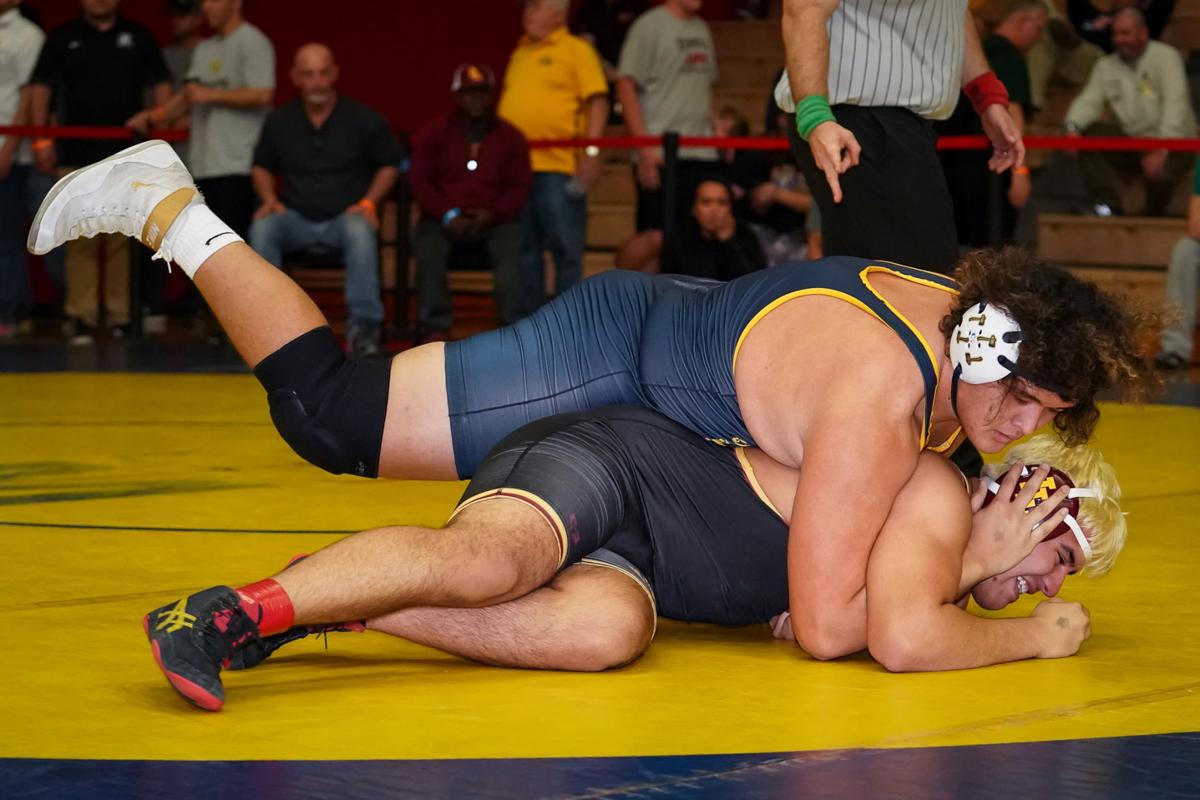 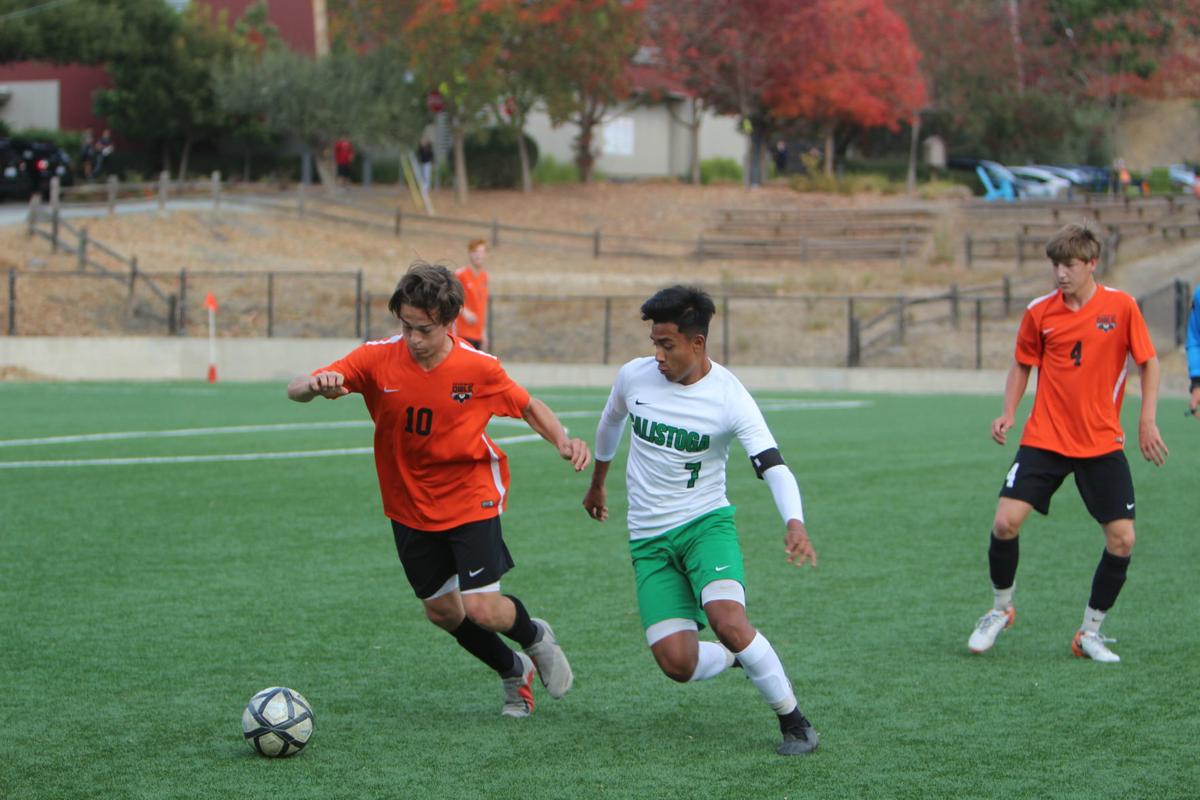 Shanker can’t sneak up on anybody on the tennis court after putting together an impressive undefeated season in 2019, winning both the Vine Valley Athletic League and the North Coast Section Division I singles titles.

A year after falling in the VVAL final to her older sister, Shanker pulled out a 6-2, 6-4 win over Vintage’s Jamie Pope at the Napa Valley Tennis Association courts. It was closer than the score indicated as Pope, who also be a junior this year, tied the first set 2-2 and the second set 4-4.

“Priyanka is really athletic and plays cool under pressure. It’s been great to coach her the last two years,” Justin-Siena head coach Jim Reilly said after the match. “We’re just proud as a team that she represents the school and the sport so well. Her upside potential is huge.”

Five days later, Justin-Siena absorbed its only team defeat of the season with a 5-2 NCS Division II playoff loss to Head-Royce. Six days after that, Shanker won the NCS Division II singles crown at Napa Valley College. Seeded No. 1, she beat a senior who was the defending section champion, second-seeded Olive Maunupau of San Francisco’s Lick-Wilmerding, 6-3, 6-2.

She practiced with sister Parvathi, who will be a senior this year after skipping high school tennis as a junior.

“As they are only a grade apart, we are happy they have one another and motivate each other at school and at tennis,” said their mother, Seena.

Shanker had to tough out her toughest match of the season in her opener, a 6-3, 2-6, 6-1 nailbiter over San Marin’s Hannah Lam-Truong, before trouncing Branson’s Anna Larner 6-1, 6-1 in the semifinals.

Lessons she took from Chris Kubicka at Napa Valley Country Club and Dave Zamarripa in St. Helena paid off.

“Going into this, I didn’t think that I would win. I didn’t even feel like I should’ve gotten the No. 1 seed,” the sophomore said. “My teammates and coaches have been so supportive throughout the entire season, especially Coach Judy (Newell). She gave me some great advice during the matches, which really helped me pull through.”

Shanker also went out for track and field this spring. On Feb. 29, she posted a personal record of 11 feet, 9 inches in the long jump and ran the third leg of the 4x100-meter relay at the Stocking Super Seven Invitational at Diablo Valley College in Pleasant Hill. On March 11 against American Canyon and host Casa Grande in Petaluma, she won the long jump.

The 6-foot-2, 270-pound Lex helped a football team that finished 0-10 in 2018 bounce back and finish in a tie with American Canyon for second place in the Vine Valley Athletic League.

“We respect every team and our main focus is to dominate, as Coach (Richie Wessman) says, and don’t think ahead; that’s how you get cocky and that’s how you’ll lose the game,” Lex said after a 49-7 home rout of Petaluma.

In the winter, he was team leader in the 285-pound weight class. Despite being 15 pounds lighter than most of his competition, he managed to place second in the VVAL and fourth at the North Coast Section Championships, one place short of qualifying for the state meet. Winning the weight class at each meet was a Casa Grande senior that Lex won’t have to worry about this year.

Lex also won have to worry about Vintage’s Konrad Fiske, who graduated after placing second to Lex at the VVALs and going 3-2 at sections.

“Cole and Konrad are two of the top 10 kids in the North Coast Section,” wrestling head coach Nacho Franco said after the league meet.

Lex capped his three-sport junior year by being part of Napa High’s first-ever boys lacrosse team, though the Grizzlies got to play only three games before their season was canceled due to the coronavirus pandemic.

Was one of the few athletes who was able to play three full seasons in 2019-20, playing football and soccer in the fall and basketball in the winter.

He had 8 goals and 20 assists while co-captaining the soccer team in the fall, and was a finalist for All-Napa County Offensive Player of the Year. He made the All-North Central League II First Team as the Wildcats went 9-0-1 in league and 14-1-2 overall after reaching the NCS Division II semifinals.

“During one of our games that we were leading by several goals, we had a freshman player in at forward who was getting opportunities to shoot on goal but was missing,” recalled head coach Charley Hester. “Isaac took as few seconds during the game to show this player better form.”

On the gridiron, he received all-league offensive honorable mention and was a finalist for All-County Newcomer of the Year.

A tight end and defensive end in his first year of the sport, he caught 3 touchdown passes — including the tying touchdown in an overtime playoff win over Tomales that was Calistoga’s first postseason victory in 10 years — and led the Wildcats in receptions. On special teams, 98% of his kickoffs reached the end zone, 4 of his 5 onside kicks were successful, he was a consistent field goal kicker who missed a 47-yard attempt by a foot, and he returned 2 punts and 1 kickoff for touchdowns. He also played defensive end and had 2 sacks, 1 interception and 2 fumble recoveries.

Garcia was also an All-County Newcomer of the Year in basketball. Despite also being in his first year of that sport, he was the Wildcats’ third-leading scorer and helped them win their first league title in 28 years.

“He was very important athlete to us,” basketball co-coach Cesar Cruz said. “His versatility was a big reason for our success. He was able to defend anyone, from their guard to their center. Offensively, he could play anywhere from our off guard to our center positions. His versatility allowed us to create mismatches all over the court.”