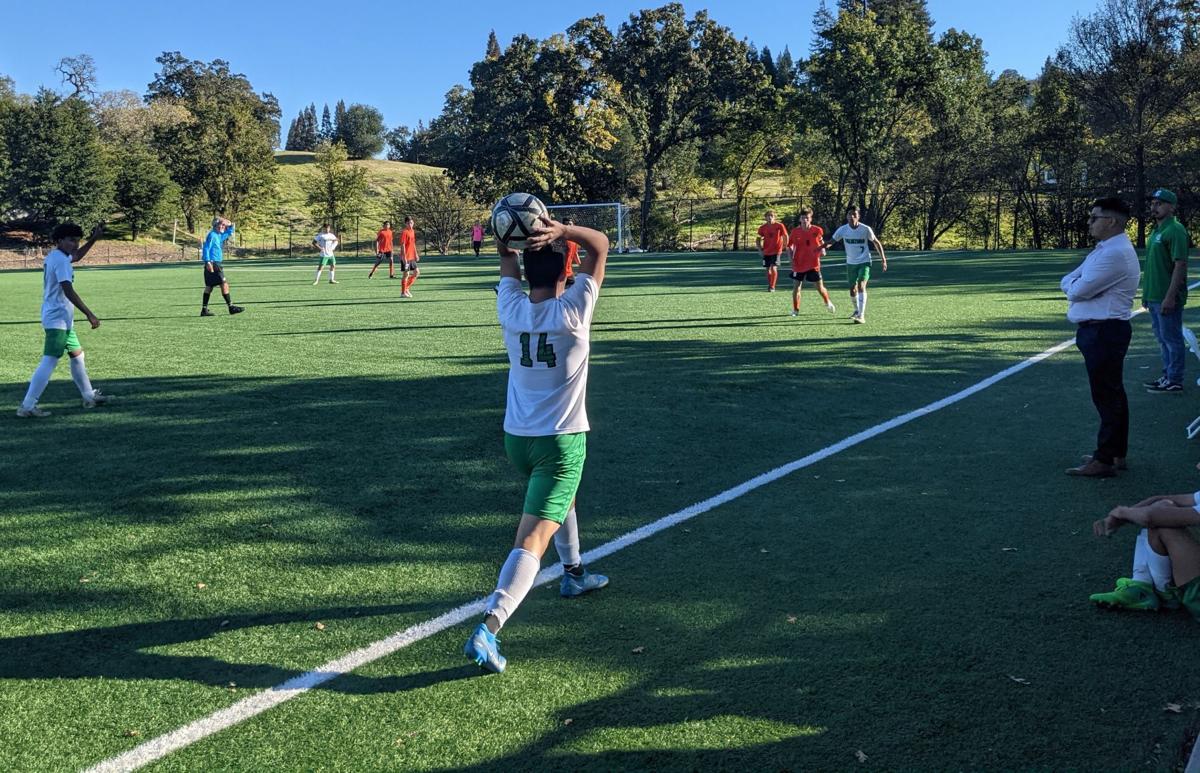 DANVILLE — Two years ago, the Calistoga High boys soccer program squared off against Anthenian of Danville in the semifinals of the North Coast Section Division 2 playoffs and fell 4-0.

On Saturday afternoon, on the same field against the same opponent, the Wildcats squared off against the Owls for the NCS Division 2 championship.

The final score may have been different than two years before but, unfortunately for the large crowd of Calistoga faithful in attendance, the final result was the same. The fifth-seeded Wildcats, after finding the back of the net twice and having both goals called back, fell 1-0 to No. 2 seed Athenian.

One thing that stood out instantly, moments before kickoff on the small campus nestled at the base of Mt. Diablo State Park, was the sheer number of Calistoga supporters in attendance. The Wildcats traveled well, as the rooting section on the side of the field opposite the players was nearly all Calistoga fans. The Wildcats had large crowds at most of its road games this season.

“The community is always here to support us and they cheer their hearts out,” Calistoga senior Alexis Escobedo said. “We love their appreciation and everything and I hope they keep supporting us the way they do. They saw the potential in us. Many people doubted us this year, but it’s great that we had a lot of supporters from the town that came out to every game.”

“My favorite memory probably just has to be this last week against Sonoma Academy,” senior Christian Caldera said. “Just simply because we lost to them two times in the regular season and because I knew for a fact they came into that game thinking that they're gonna be the top dogs and they're gonna take that W easily. But we obviously showed them that we can play with the top dogs as well and we beat them. It just feels great to beat the No. 1 seed in any sport.”

The Wildcats waged a tense battle with the Owls from start to finish. Each team had opportunities, but neither was able to take advantage of its chances. Calistoga had the speed advantage and wanted to play kick and run and use counter-attack bursts to deal with a strong Athenian defense. The Owls wanted to use crisp and quick passes to weave through the Calistoga defense to get the ball to their heavy hitting strikers.

Athenian tested Calistoga’s defense early, firing off a couple of shots at goalkeeper Christian Ramirez. “He’s probably one of the best goalies we have had here in a long time,” Contreras said. “He's a phenomenal goalie. That kid is going to go places if he continues working hard.”

One of the near misses came from the largest player on the field, forward Colin O’Byrne. The junior used his body and large legs to push around Calistoga defenders on contested balls throughout the afternoon.

Athenian had more opportunities during the game, especially chances inside the box. The Owls had numerous corner kicks and throw-ins near the Calistoga goal, but nearly each time a dangerous threat was blasted away to midfield by a Wildcats defender. Calistoga had only four total shots in the first half, but three made it on frame for Owls keeper Noah Levy to stop. While Athenian had seven total shots, only two of them made it near Ramirez in the net.

The first controversial moment of the game came near the end of the first half. Calistoga went on a counter attack and booted the ball up the right wing of the field. An attacker ran onto the ball and blasted a shot past Levy to seemingly put Calistoga up 1-0. A few seconds after the ball hit the back of the net, the sideline official raised his flag to indicate the Wildcats had been offsides from the beginning of the play, and the game was still scoreless at halftime.

Athenian came out of the halftime break with a better motor, finding holes in the Calistoga defense a couple of times on nice overlap runs. Neither team was able to break the scoreless tie, but it wasn’t for a lack of trying.

Calistoga had its best chance in the middle of the second half, when it booted a corner kick from the right side. The ball came flying into the box and members of each side eagerly waited for the ball to come to their feet. It bounced off a couple of players and went right to Caldera.

The star striker, with a cast on his arm from a football injury, smashed the ball into the back of the net. The Wildcats celebrated what they thought was the go-ahead goal. But once again, the sideline judge put his flag into the air relatively late and the goal was disallowed. Goals on corner kicks are usually disallowed if the player who scores crosses the goal line before scoring.

Arguments raged on for a few minutes as players and coaches challenged the call, but it eventually stood.

Unfortunately for the Wildcats, the following 10 minutes would seal the game’s fate. Athenian went on a counter attack against a distracted Calistoga side. On an Owls corner kick from the right side of the field, the ball bounced around a couple of times before coming to the head of O’Byrne. The junior placed the ball just under the top bar, past the outstretched fingers of Ramirez for the lone goal of the match.

“I just feel like we could have won. I feel like we got robbed, honestly,” Contreras said. “I mean, we all knew that wasn't a clear offsides. “Unfortunately, they took us on that one-on-one and scored, and we just couldn't come back. We tried. We overcame all the odds just to be here.”

Calistoga changed to a more offensive formations and started an all-out attack, but the Owls boarded up their defense and held strong.

When the final whistle sounded, many Calistoga players fell to the ground. But the future is bright for the young Wildcats, who will be graduating only four players.

“The seniors, they've been exceptional. I mean, they took this team and stepped up,” Contreras said. “We have a very fresh, young team. We have maybe 12 sophomores, four freshmen, two juniors and four seniors, so they really stepped up,” Contreras said. “It's just such a very young team. They as a group should be proud. For a mainly freshman-sophomore team, they went really far.”

Added Escobedo, “This feels really, really bad because this is our last year and we had a really special team. We had a lot of young players forming around us four seniors. Hopefully next season these young stars can go further. Hopefully they can learn from this. They know how it feels to lose and win from this year.”

The loss dashed the hopes of Caldera and fellow senior Isaac Garcia, who are both also on the football team that will play a semifinal at Branson on Saturday, of winning two section titles in the same year.

“We played our hearts out this year, and I feel like we won today,” Garcia said. “Today we took the ‘W’ — in our eyes — for our whole crowd, our whole town. I just feel like we got robbed today.

“We’re a tight-knit community and we’re all family. We'll be there for each other in the long run, wherever we end up.”

The 2022 Little League Season will soon be upon us, and now is the time to sign up your kids ages 4 to 14 for tee-ball, baseball, and softball.