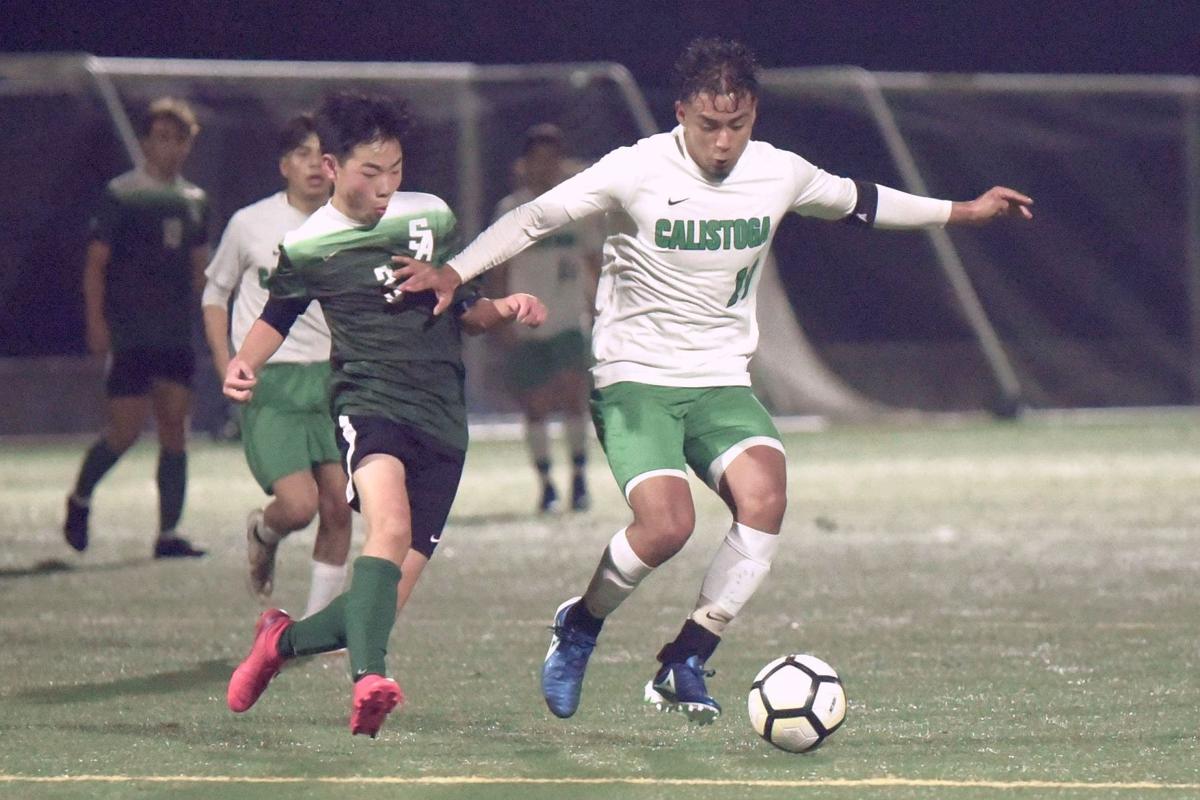 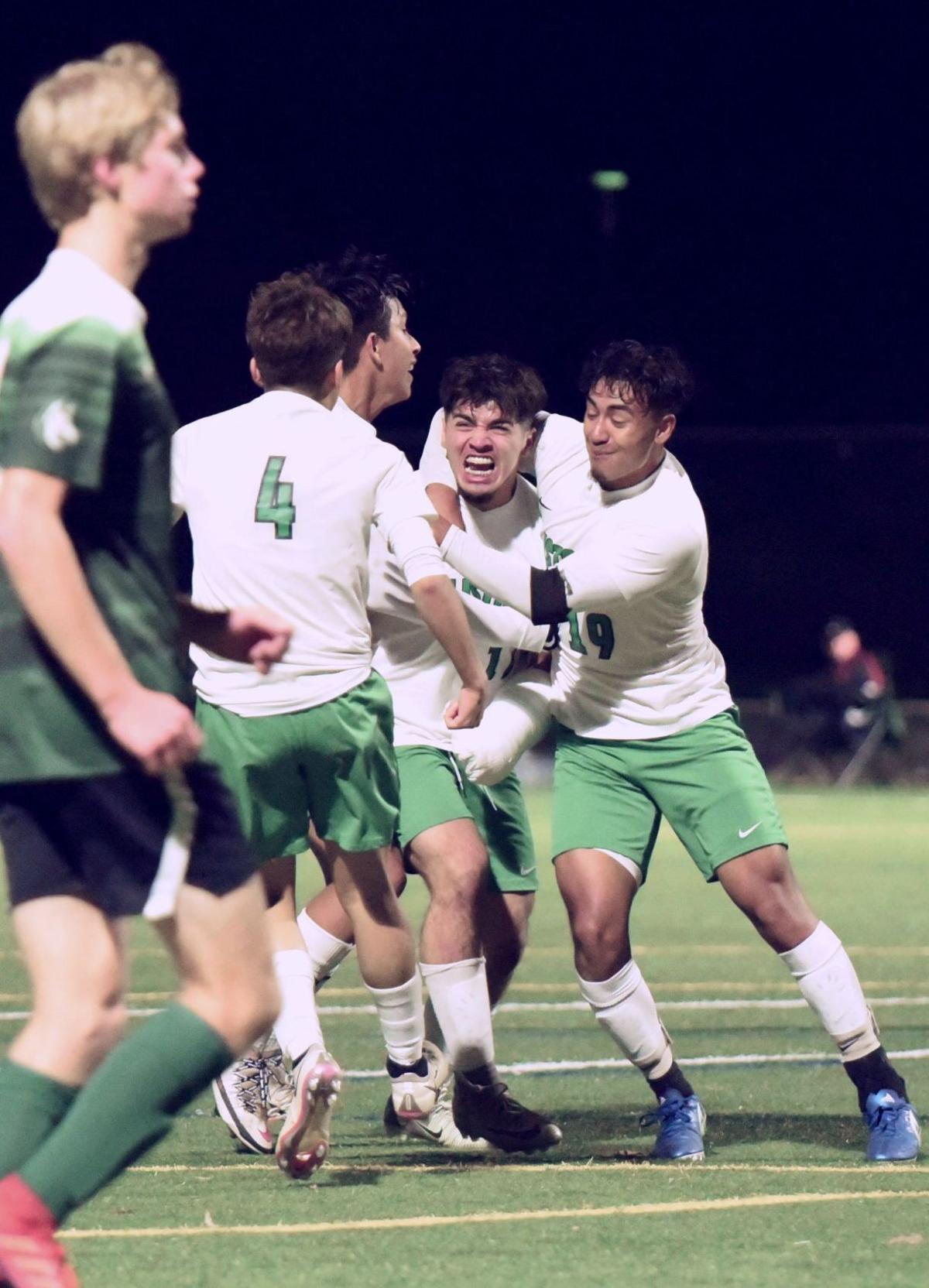 Calistoga senior Christian Caldera gets a congratulatory hug from Isaac Garcia (19), with Alexis Escobedo (4) joining the celebration, after giving the Wildcats a 1-0 lead over Sonoma Academy in the first half Wednesday night. 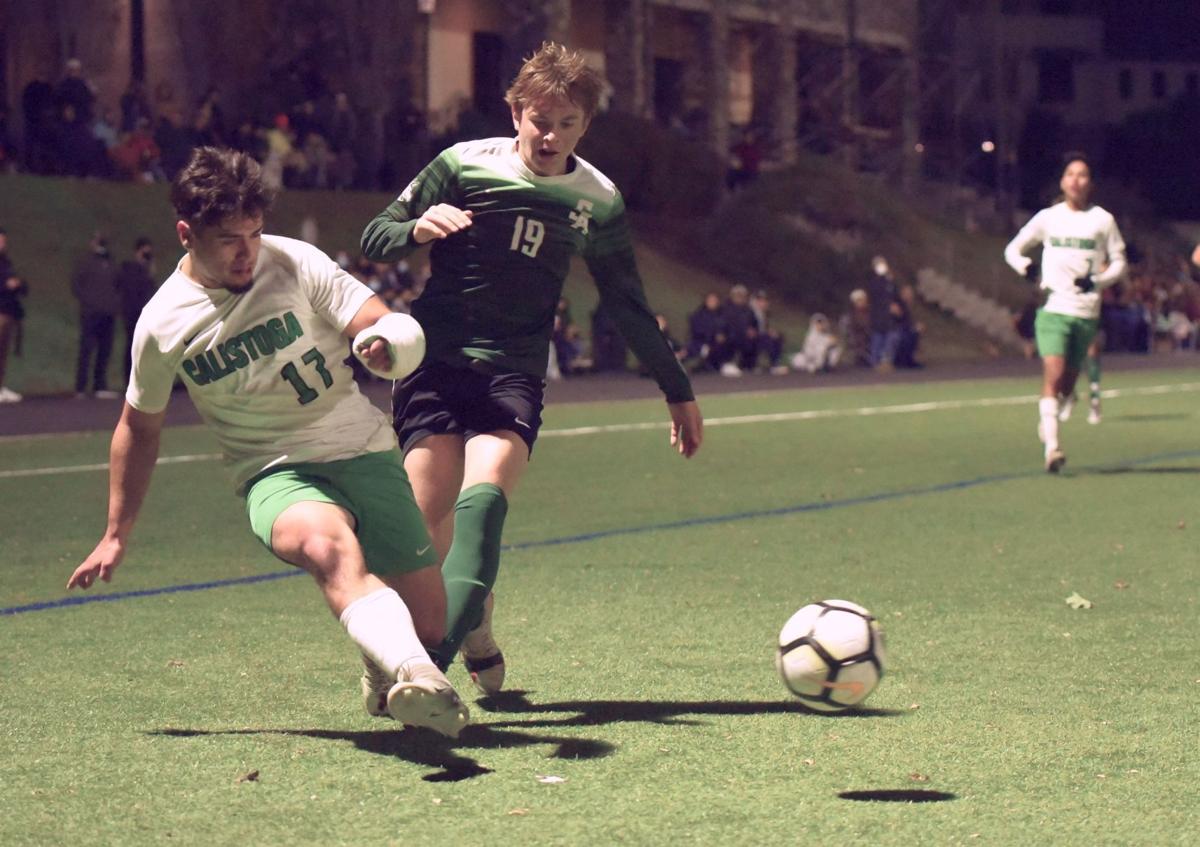 Calistoga's Christian Caldera (17), playing for the first time in a month with an air cast on his broken arm, crosses the ball against Sonoma Academy on Wednesday night. 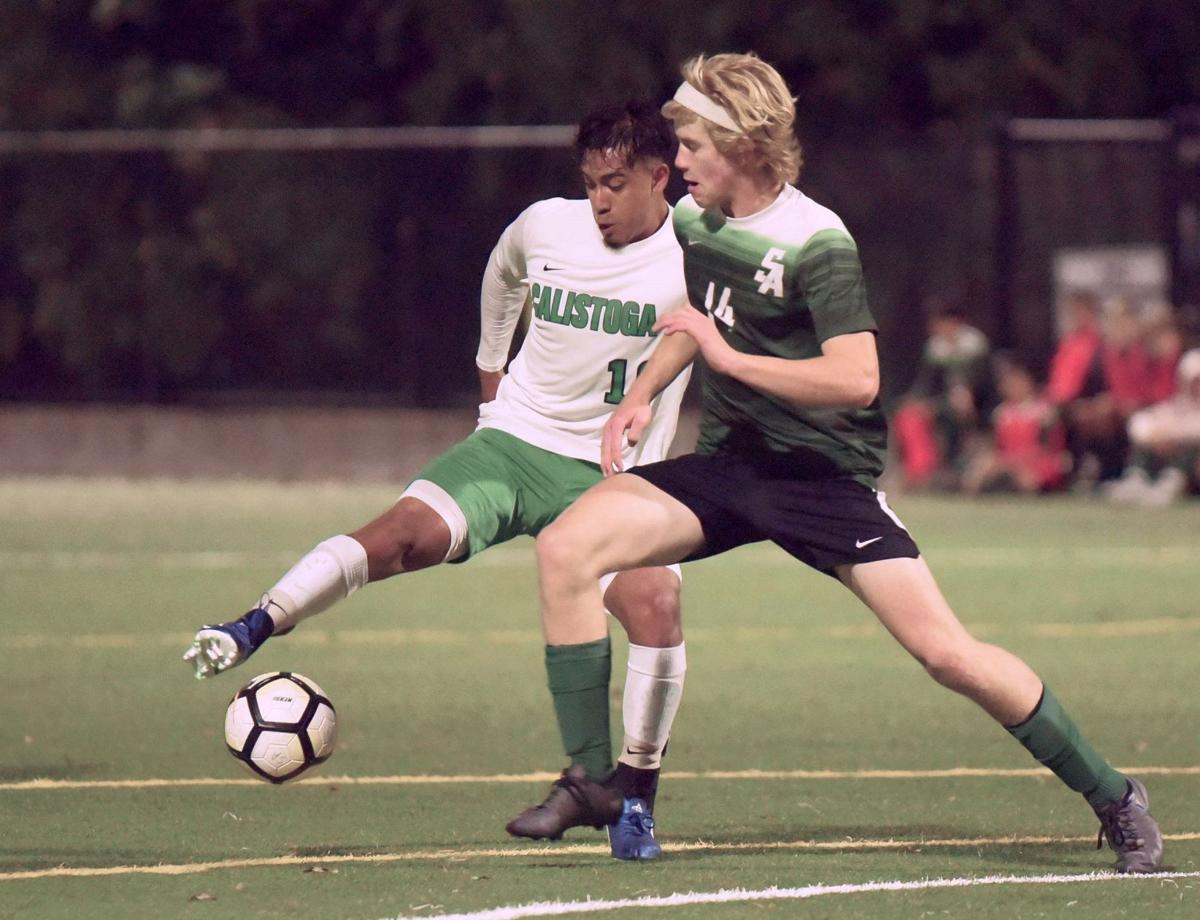 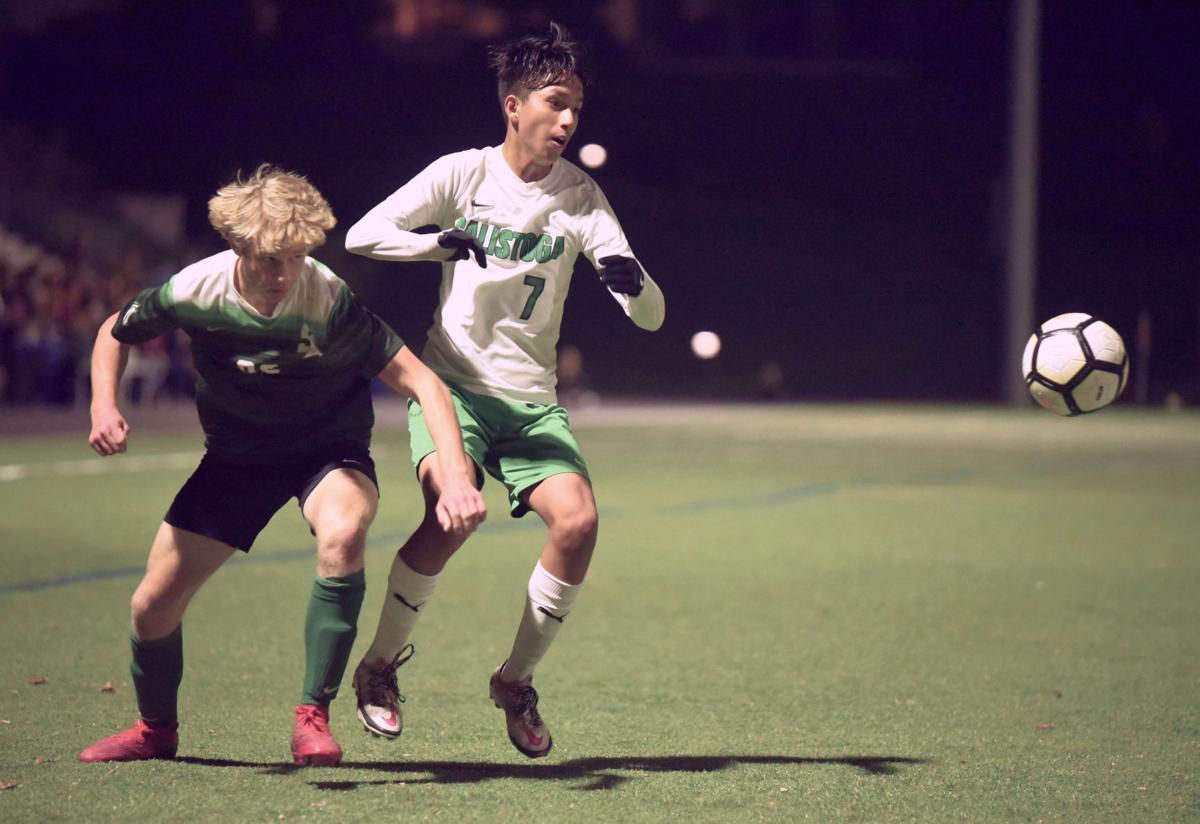 SANTA ROSA — Christian Caldera not only played for the Calistoga High boys soccer team for the first time in month, his broken arm in an air cast, but sparked the Wildcats to one of the biggest wins in their history.

The senior scored the first goal with 13 minutes left in the first half of Wednesday’s North Coast Section Division 2 semifinal at No. 1 seed Sonoma Academy. The Coyotes’ Zander Crawford tied it seconds before halftime, but Calistoga senior Isaac Garcia delivered the winning goal midway through the second half to put the fifth-seeded Wildcats in the final with a 2-1 victory.

“Today was a game that was amazing,” said Garcia, a center midfielder. “I feel like we all put our hearts into it today, we all touched the ball, and we had amazing communication. I believe that’s what brought us the ‘W’ today.”

A few of the Wildcats’ seniors, such as Alexis Escobedo, Caldera and Garcia, were on the 2019 team that saw its season end with its only loss that year, 4-0 at Athenian in a semifinal. Those Owls went on to beat College Prep of Oakland, 4-2, for the section title.

It took monumental confidence to beat a Sonoma Academy (13-2-2) side that had owned Calistoga in two league meetings this season, winning by a decisive 4-1 score each time.

“It was an exceptional game,” Wildcats head coach Hector Contreras said. “We played with our hearts, we played with what we had, and we worked hard, and that’s why we’re where we’re at today — hard work.”

Contreras said co-captains Escobedo and Garcia were key contributors in the win along with defensive players Josue Perez and Jesus Espinosa and goalkeeper Christian Ramirez.

This will be Calistoga’s first appearance in a NCS final since it lost to Branson on penalty kicks in the 2009 Division 3 championship at Calistoga’s Logvy Park. The Wildcats lost in the semifinals in 2012, 2016 and 2019.

No playoffs were held last year because of the COVID-19 pandemic, making Calistoga even hungrier for its long-awaited rematch with Athenian. After losing in the quarterfinals in 2018 and then the semis, perhaps Calistoga was due to get back to the final.

“We’ve been robbed two years in a row, our freshman year and our sophomore year,” Garcia said. “I believe this year we will be taking it all.”

The Wildcats don’t want to waste the rare opportunity.

“We’re going to go for everything,” Contreras said. “I think we’ve got all the tools.”

Added Escobedo, a center midfielder and left wing, “We put all of our efforts and hard work into this. We’ve been training for it our entire life. Unfortunately, we didn’t make it my sophomore year against Athenian, but this is our year and we’re coming for that title.

“It’s going to feel like a lot of intensity. We’re going to have a big crowd. We love our supporters — they’re always going to support us in everything — and we hope for the best.”

Calistoga senior Christian Caldera gets a congratulatory hug from Isaac Garcia (19), with Alexis Escobedo (4) joining the celebration, after giving the Wildcats a 1-0 lead over Sonoma Academy in the first half Wednesday night.

Calistoga's Christian Caldera (17), playing for the first time in a month with an air cast on his broken arm, crosses the ball against Sonoma Academy on Wednesday night.