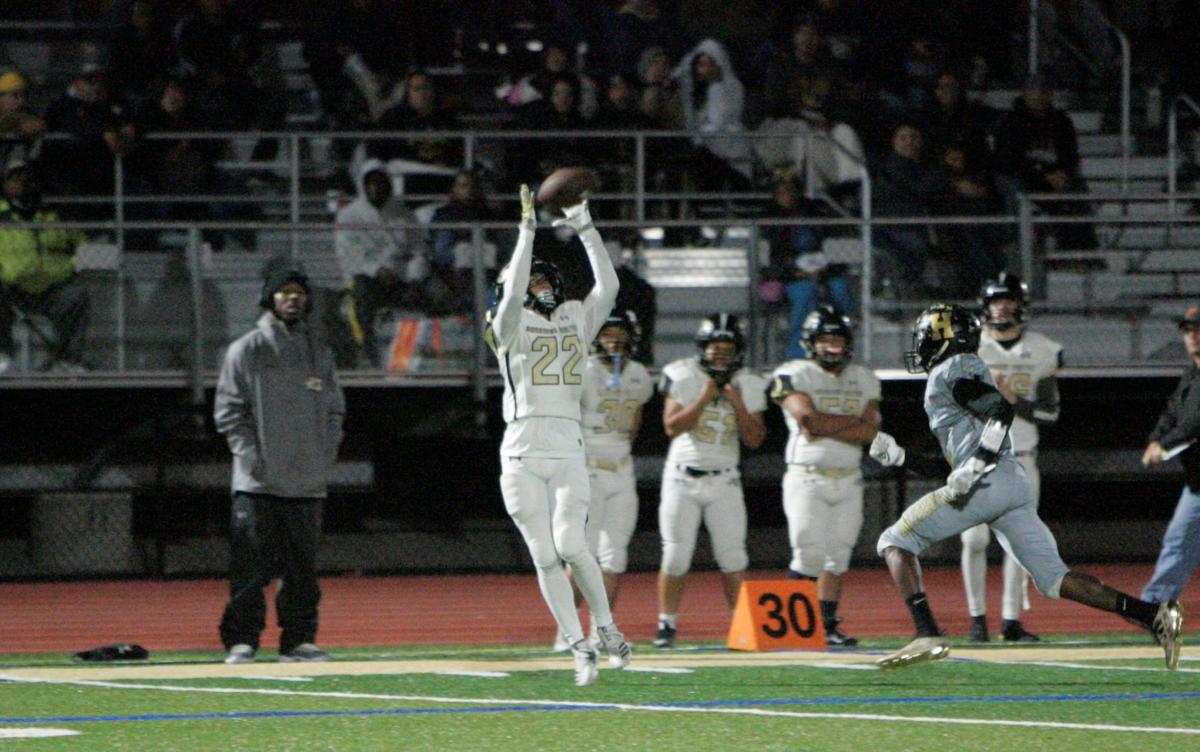 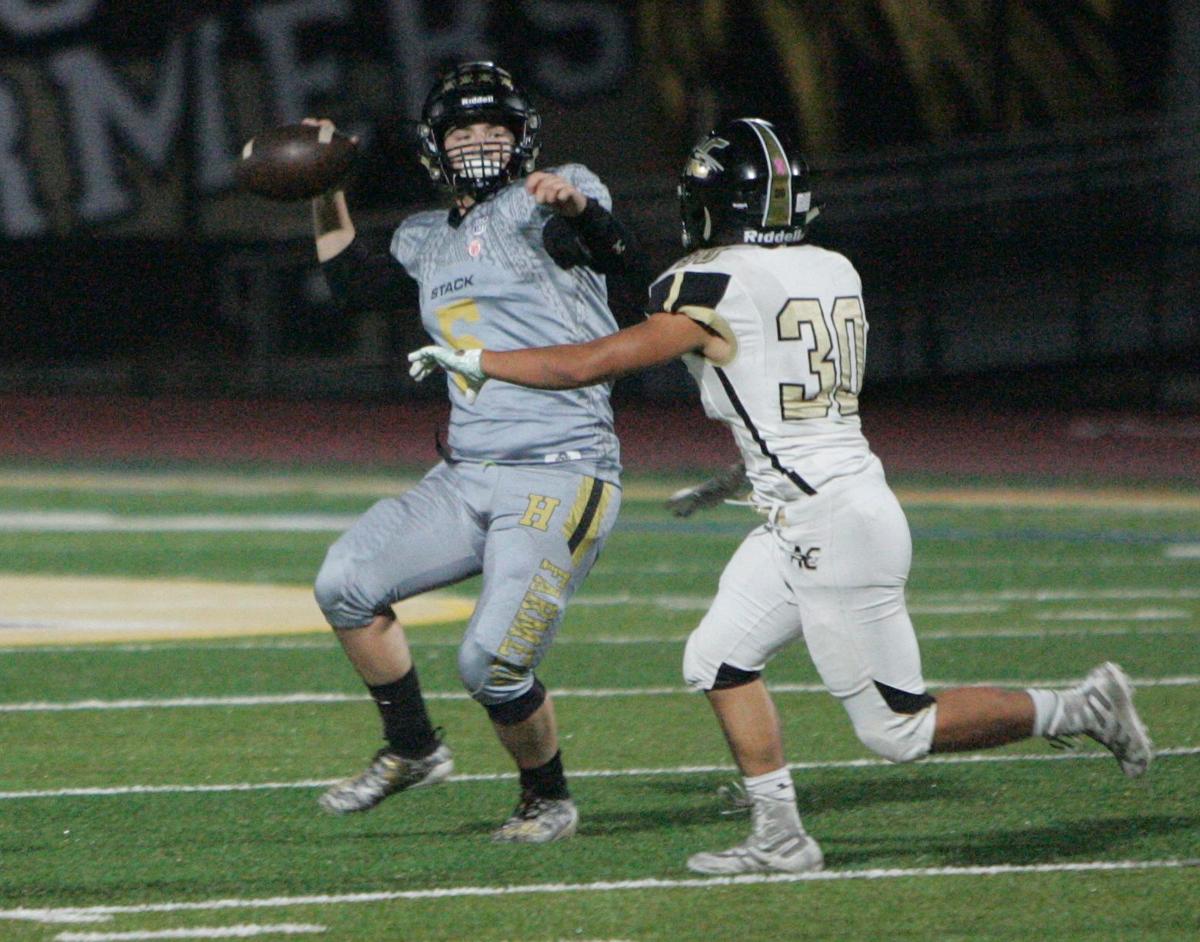 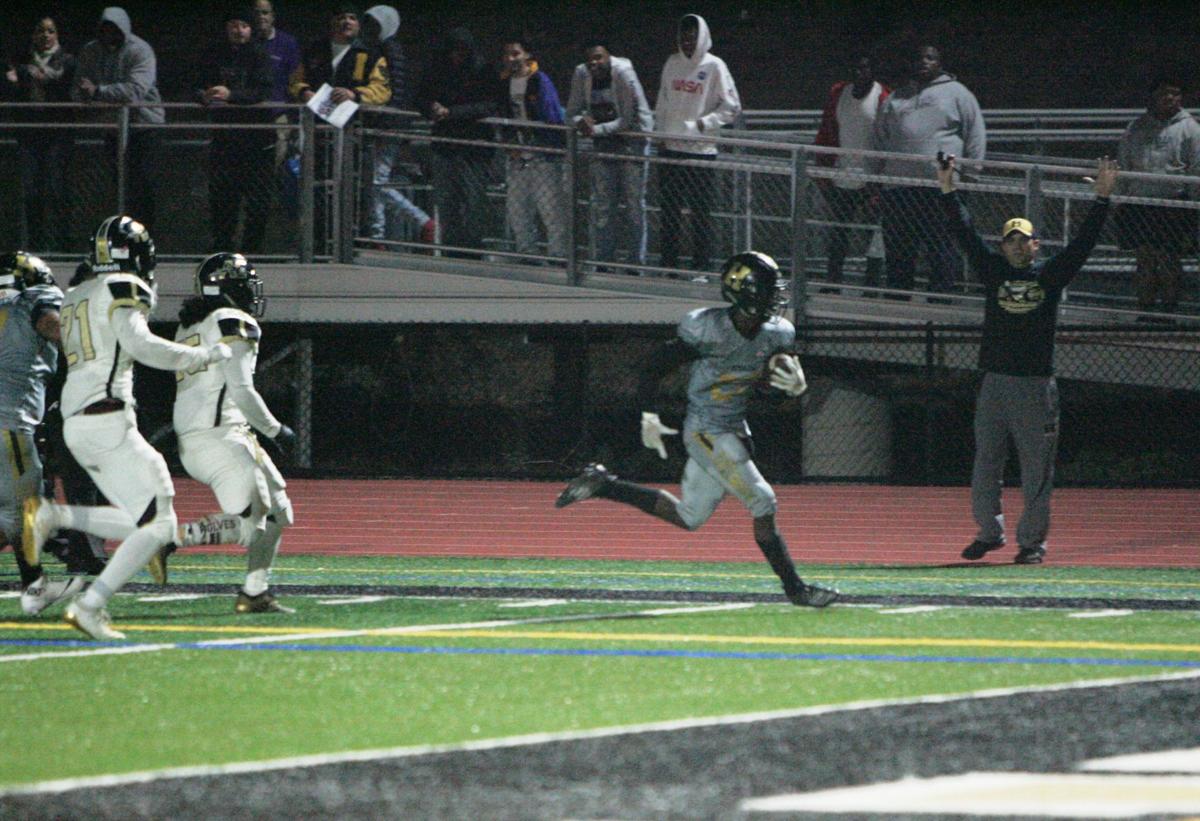 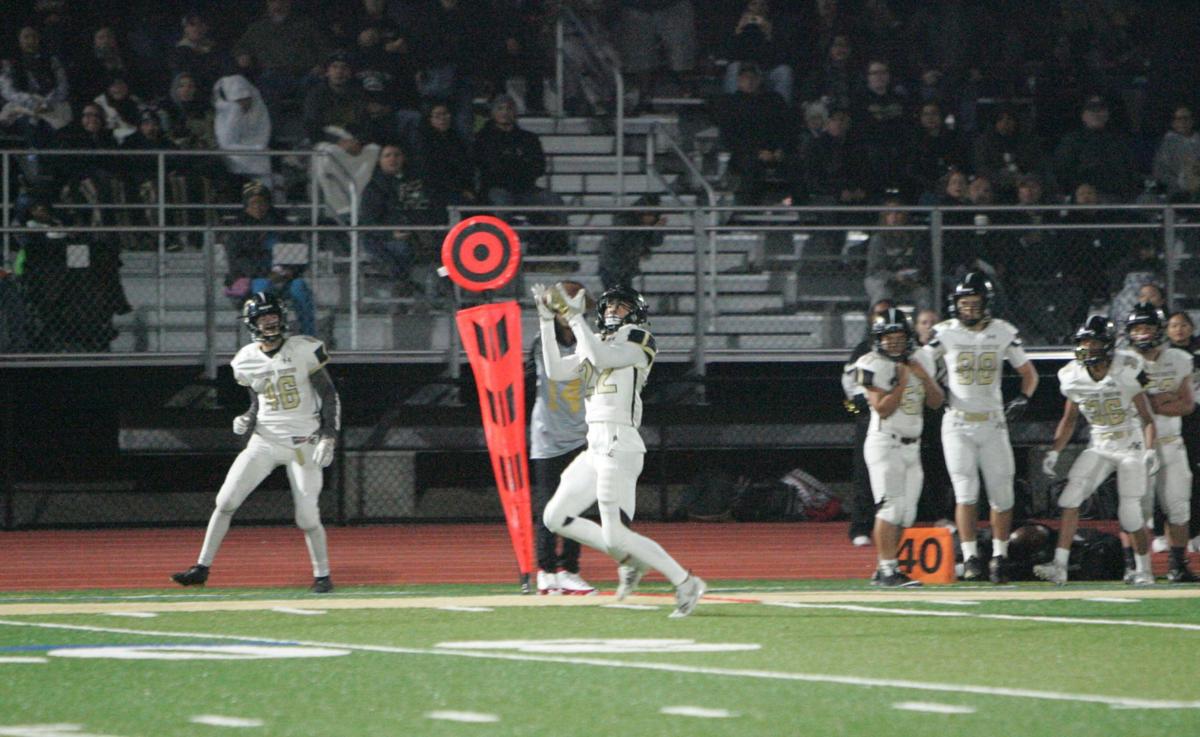 The quickness of the No. 4-seeded Farmers even helped them overcome their own gaffes as they ended the Wolves’ season, upending the visitors, 29-13.

“When I used to coach at Chabot College, this is one of the schools where we used to recruit because they’ve got players out here,” American Canyon head coach John Montante said. “But we had our shots and we didn’t take advantage. It’s the theme of the year, it seems like: missed opportunities.”

The No. 5-seeded Wolves (8-3) never gave up, even after falling behind 29-7 late in the third quarter and giving the ball right back when Hayward (10-1) recovered quarterback Vance Eschenburg’s backward pass at the Farmers’ 29-yard line.

American Canyon forced a quick punt and appeared to get a rare break when the snap sailed well over punter Payton Churchwell’s head. But the Hayward junior chased it down and, instead of falling on it at his own 15 to give the Wolves great field position, picked it up, found running room along his own sideline, and got a first down by running 45 yards for what was officially a 21-yard gain from scrimmage.

“We should have had that (stop),” said American Canyon senior Justin Del Rosario. “It’s just like all the little mistakes we were making all year. We never fixed them.”

American Canyon still managed to get the ball back on downs at its own 29 and score nine plays later on a 2-yard keeper by back-up quarterback Vinnie Espejo, who was giving Eschenburg a breather, with 5:12 left in the game. Junior running back Ezekiel Anderson highlighted the drive by completing a 44-yard pass to senior Justin Del Rosario to the Farmers’ 19.

The Wolves tried to make it a 14-point game with a two-point conversion. But Eschenburg’s pass fell incomplete, keeping it 29-13.

Hamilton had returned his first interception 40 yards for a touchdown just into the second half for a 22-7 lead.

American Canyon tried to answer, getting into Hayward territory with a 12-yard keeper by Eschenburg and 15-yard penalty for a late hit. The signal caller found Kaave Gaviola with back-to-back 9-yard completions to advance to the Farmers’ 23, but ended up throwing incomplete on fourth down.

“They brought eight guys every time and that’s tough. We had six guys blocking and they brought eight, so I had to run for my life,” Eschenburg said. “I’m pretty tired. That was a lot of pressure tonight. But we just didn’t execute enough in the red zone. If we would have scored on each of our red-zone drives, it’s a whole different game.”

Hayward then essentially put the game away with a nine-play, 70-yard scoring drive keyed by Francisco Sedano’s 43-yard pass to Deshawn Carter. Jamal Boyd, a 270-pound fullback, scored by leaped over a pile of defenders from a yard out.

After each team punted to start the game, Hayward took a 7-0 lead on Deven Franklin’s 21-yard catch and run and the first of Emilio Padilla’s three extra points. Each team then went three and out, before American Canyon got on the board with a 57-yard touchdown pass from Eschenburg to a wide-open Del Rosario. The latter added the extra point to make it 7-7 with 8:05 left in the half. Three plays later, however, the Farmers went ahead to stay, 15-7, on two-way standout Hamilton’s 62-yard touchdown grab and two-point conversion catch from Sedano.

The Wolves had two very good chances to answer before halftime. They drove 60 yards in 10 plays, getting as far as the Hayward 17 before Eschenburg threw three straight incompletions.

“I was trying to run clean routes so Vance could get me the ball, but it was tough making catches tonight,” Del Rosario said. “I felt that every person did all they could for us and did their best.”

Hayward proceeded to turn the ball over on downs when a fake-punt keeper came up short of a first down. With just 23 yards to go and 1:07 left, however, the Wolves then also turned over the ball on downs to end the half.

“That was a big opportunity where we could have had some more points, but we all make mistakes,” said two-way Wolves junior lineman Ronald Hamilton. “We’ve got to just learn from them.”

The Farmers still had an eight-point lead and all the momentum going into the second half.

“We played to the best of our ability. I think we did a great job making time for our QB so we could get the passing game going,” Ronald Hamilton added. “I think it was just a couple of assignment busts; everything didn’t go as planned. Watching film, they looked like a great football team. Coming out here, it brought us back to reality and showed we’re not superhuman.”

Asked if he wished he still had Eddie Byrdsong, who rushed for a career-high 356 yards in last year’s playoff-opening road win over Montgomery as a senior, Eschenburg said this year’s Wolves had enough talent.

“I felt like we had the guys this year. A lot of guys stepped up,” Eschenburg said. “I felt like we all contributed and it was a good season overall.”