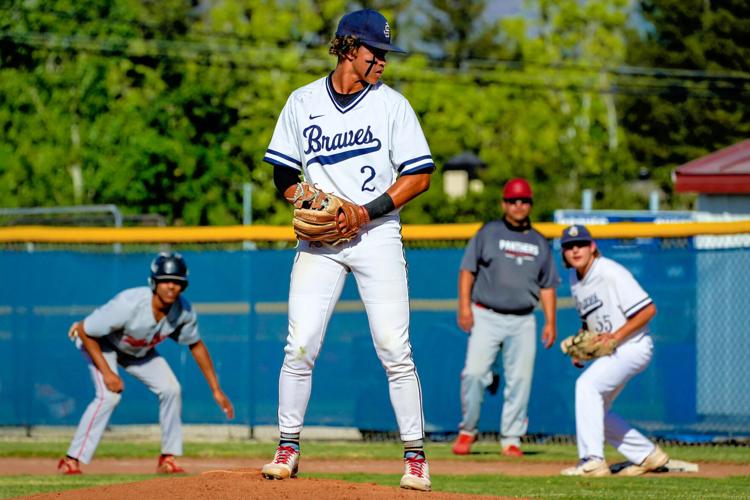 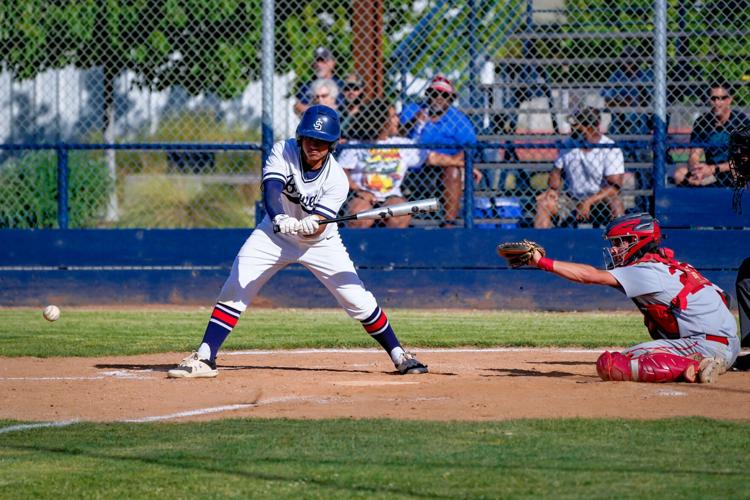 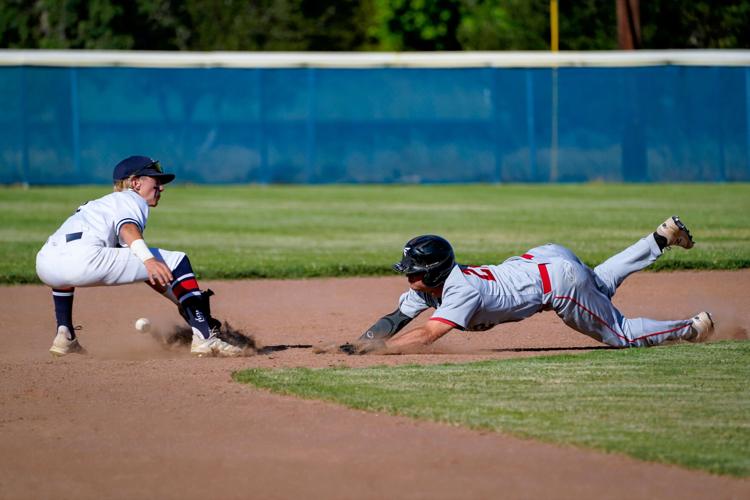 The throw gets away from Justin-Siena's Trevor L'Esperance, left, as a Saint Mary's base runner slides safely into second base during Wednesday's North Coast Section Division 4 playoff semifinal in Napa.

There are times when a pitcher is just crafty and able to put the ball wherever they want, and opponents have no explanation as to what just hit them.

This was the case in Wednesday’s North Coast Section Division 4 baseball playoff semifinal when second-seeded Justin-Siena lost at home to No. 3 seed Saint Mary’s of Albany, 5-1.

The Panthers (17-9-1) got a marvelous effort from left-handed pitcher EJ McGrew. In six innings of work, the senior struck out 12 and walked just three.

“We don't see too many lefties, but he's a good pitcher,” Justin-Siena senior catcher Robby Sangiacomo said. “He had decent velocity and offspeed. I’m just trying to figure it out myself as to why we couldn’t hit him because he’s a good pitcher but it’s nothing we haven’t seen before.”

McGrew did it by mixing and matching his pitches all around the plate. He allowed just three hits and one earned run.

“Worked with a great tempo,” Justin-Siena head coach Jeremy Tayson said of why McGrew was so effective. “He's very poised and put us away when he had to put us away.”

The lone run the Braves (20-7) scored came in the sixth when Nick Andrews led off with a double into the left-center gap, got to third on a passed ball, and came in when Matt Chadsey went with a pitch on the outside corner of the plate and poked it into right field.

“He battled it,” Sangiacomo said of Chadsey’s RBI single. “He had two strikes pretty early and he probably did what we all should have been doing the whole game, just kind of trying to poke one out to right field. He did a great job kind of starting the rally, almost having the ignition that started it. Too bad we couldn't capitalize off that.”

The visitors got on the board in the first inning. Caven Croom singled and got to second in the next at-bat when McGrew reached on an error by first baseman Bryce Laukert. A single into left field by Eli Barnett-Abrams brought home Croom.

Saint Mary’s pushed across three more runs across in the second inning. Evan Kleinhans singled before getting to third on a double over the head of Gianni Natuzzi in left field by Max Barnett-Abrams. A Triston Huerta groundout to the right side brought in Kleinhans and advanced Barnett-Abrams to third. A wild pitch allowed Barnett-Abrams to come home. Cole Filson walked and got to second on a wild pitch and to third on a groundout by Elijah James. Filson came in when Derrik Bedford tried to swipe second after walking and drew a throw that allowed Filson to come in standing up.

Taking the loss was David Elias. The senior righty worked two innings, walking one and allowing four runs to score. Three of them were earned.

Andrews worked five innings of relief. The senior struck out six and walked one in surrendering one earned run.

Saint Mary’s advances to Saturday’s championship game, where they’ll host No. 4 seed St. Joseph Notre Dame at 1 p.m. The Pilots (20-7) won 5-4 at College of Alameda on Wednesday over an eighth-seeded Redwood Christian squad from San Lorenzo that knocked off No. 1 seed Arcata 11-5 in the quarterfinals.

As for Justin-Siena, this could be the end of a season in which they had plenty of success. They won the first-ever Vine Valley Athletic League baseball tournament two weeks ago and picked up their first league victory over rival Vintage.

Tayson was asked what he’ll remember most about this team.

“Just that everybody bought into their role – bigger, small, everyone did what they needed to do,” the coach said. “We just had an excellent season. We have a lot to be proud of. We won 20 games this season and we’re damn proud of it. Everyone had a moment this year that that uplifted those around them.”

Tayson said this year’s senior class showed a lot of resiliency while getting through all that’s been happening over the last few years.

“These are the guys that were sophomores in 2020,” he said. “They didn’t have playoffs as juniors and they did everything that was ever asked of them and really went through some real adversity off the field. I think a lot of people underestimate the toughness of this generation and it's really easy and convenient to say that they're not tough. But the resilience that these guys have shown, not just these players but this generation in general, has just been phenomenal. I couldn't be more proud that I got to be a part of it, that our coaching staff got to be a part of it.”

The Braves will find out Sunday night if they’ve made the field in next week’s CIF Northern California Regional playoffs.

Trinity Prep senior Josie Haeuser had looked forward to playing college lacrosse for years, and joining her sister in the sport at the University of Dallas in Texas. When the sport was canceled after the 2022 season this spring, she received and accepted an offer from Dallas to play soccer instead, while sister Sophia is transferring to a Kansas school so she can continue playing lacrosse.

Vintage won the Vine Valley Athletic League's Commissioner's Cup for overall athletic success in the league this school year. The Crushers have won the award all three times it's been handed out.

Carson Carattini has been in Napa for a decade as a strength and conditioning coach working with basketball teams, but he never played the spo…

The Arndts like to tell the story about how their younger daughter, Rachel, got into swimming.

U.S. swimmer rescued by coach after fainting at world championships

U.S. swimmer rescued by coach after fainting at world championships

The throw gets away from Justin-Siena's Trevor L'Esperance, left, as a Saint Mary's base runner slides safely into second base during Wednesday's North Coast Section Division 4 playoff semifinal in Napa.