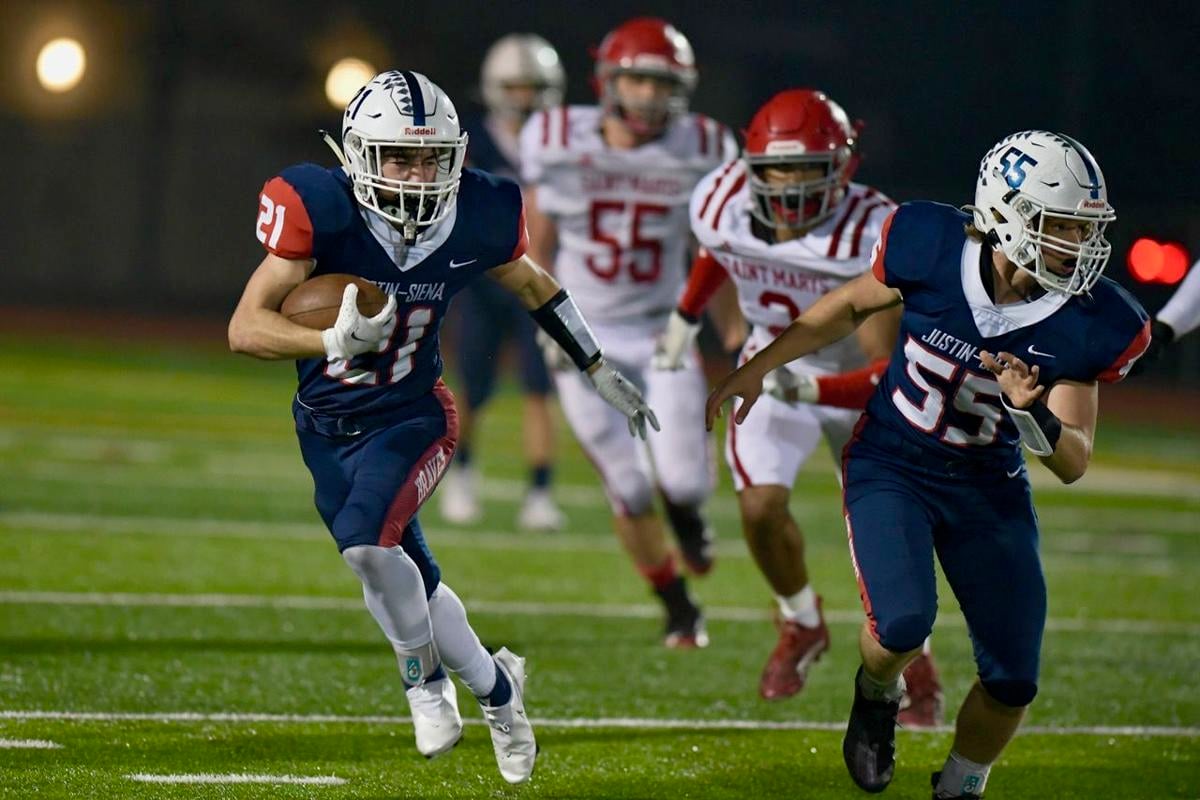 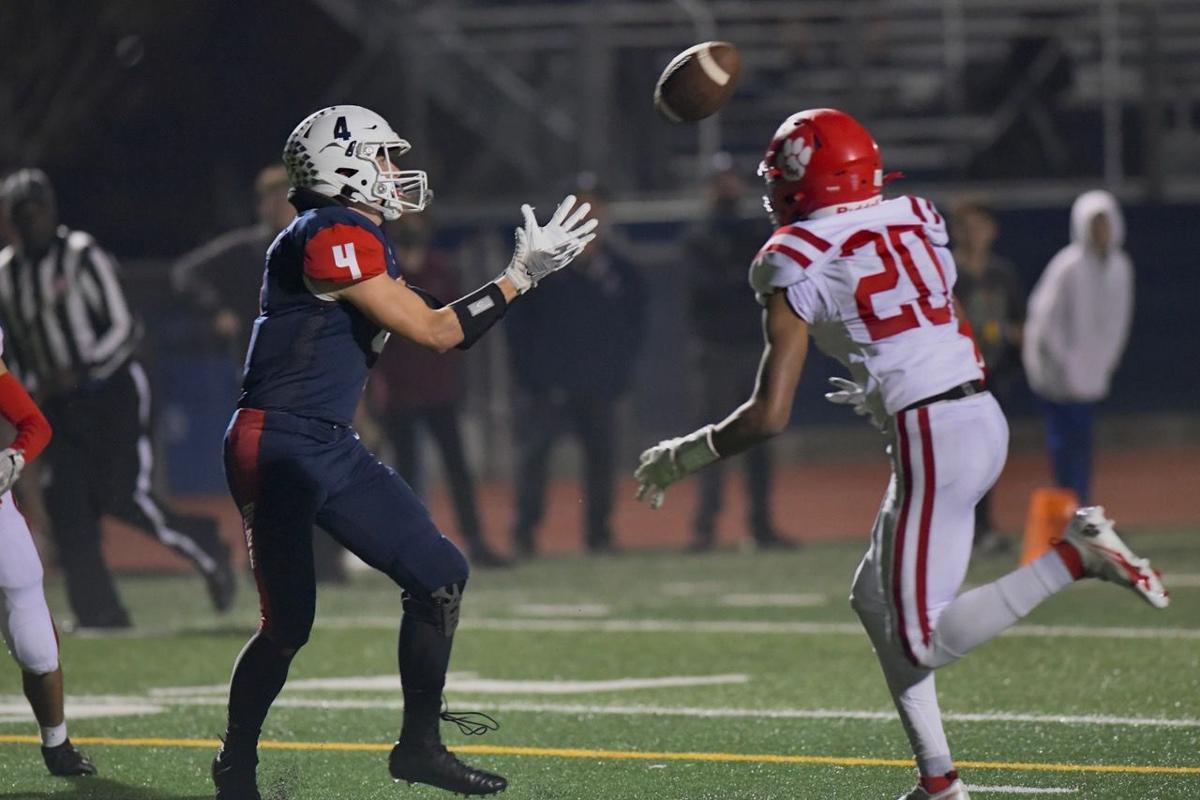 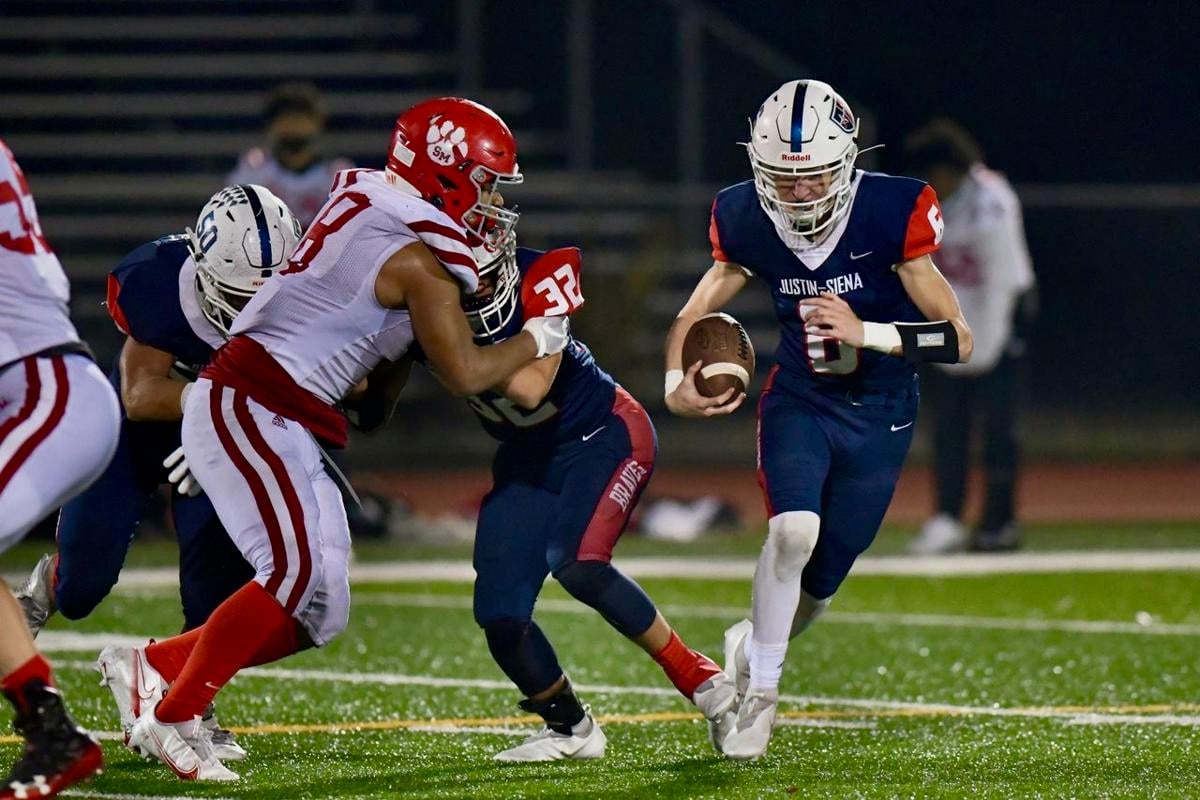 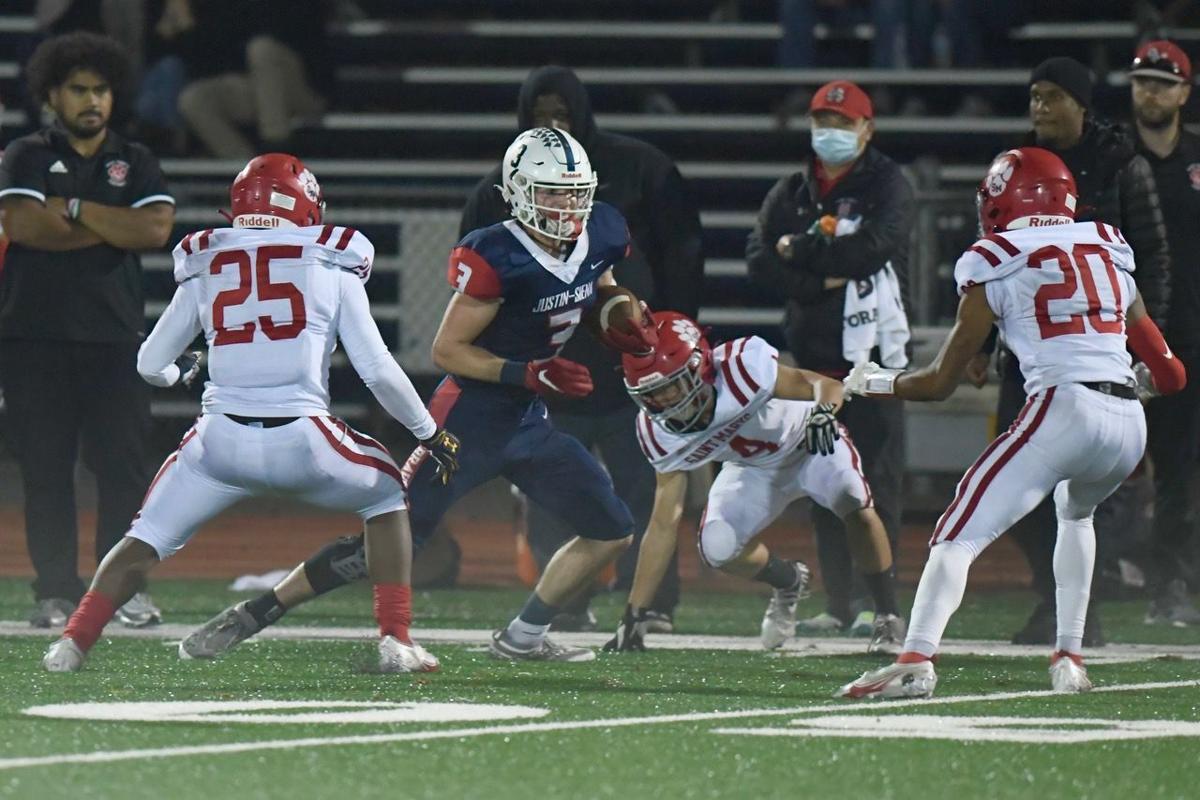 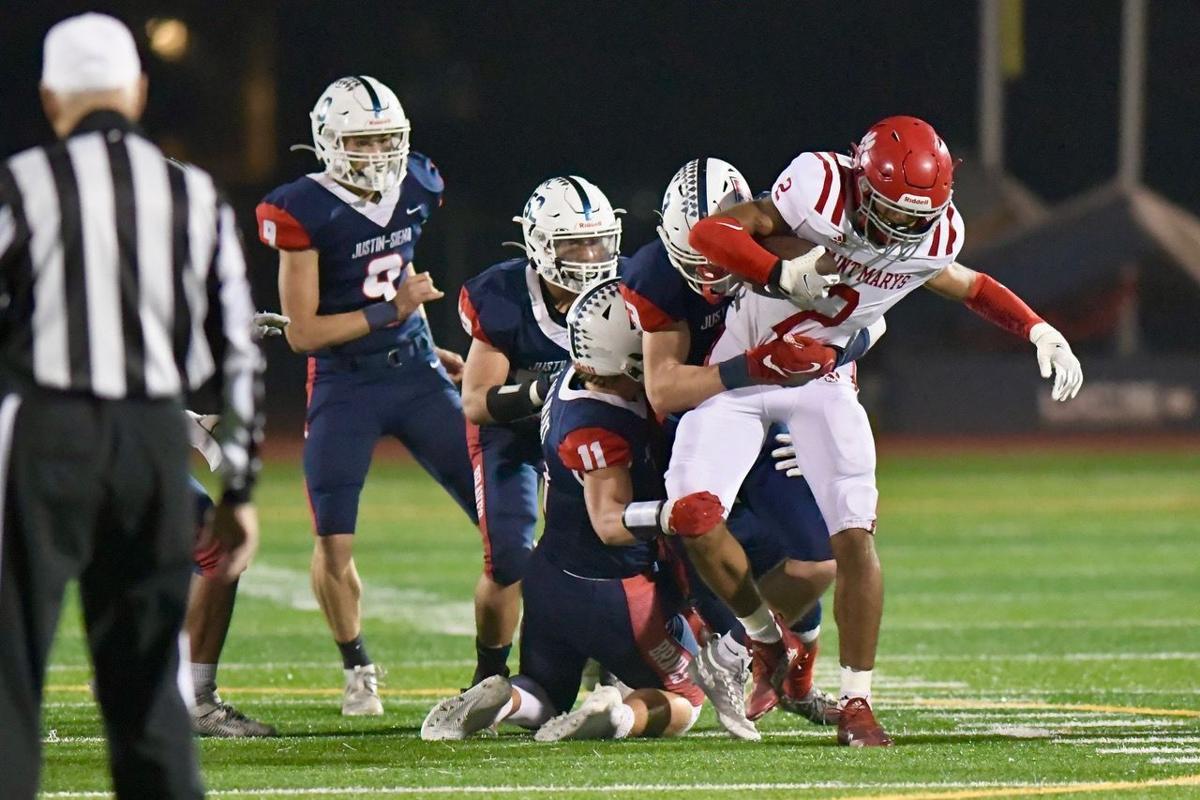 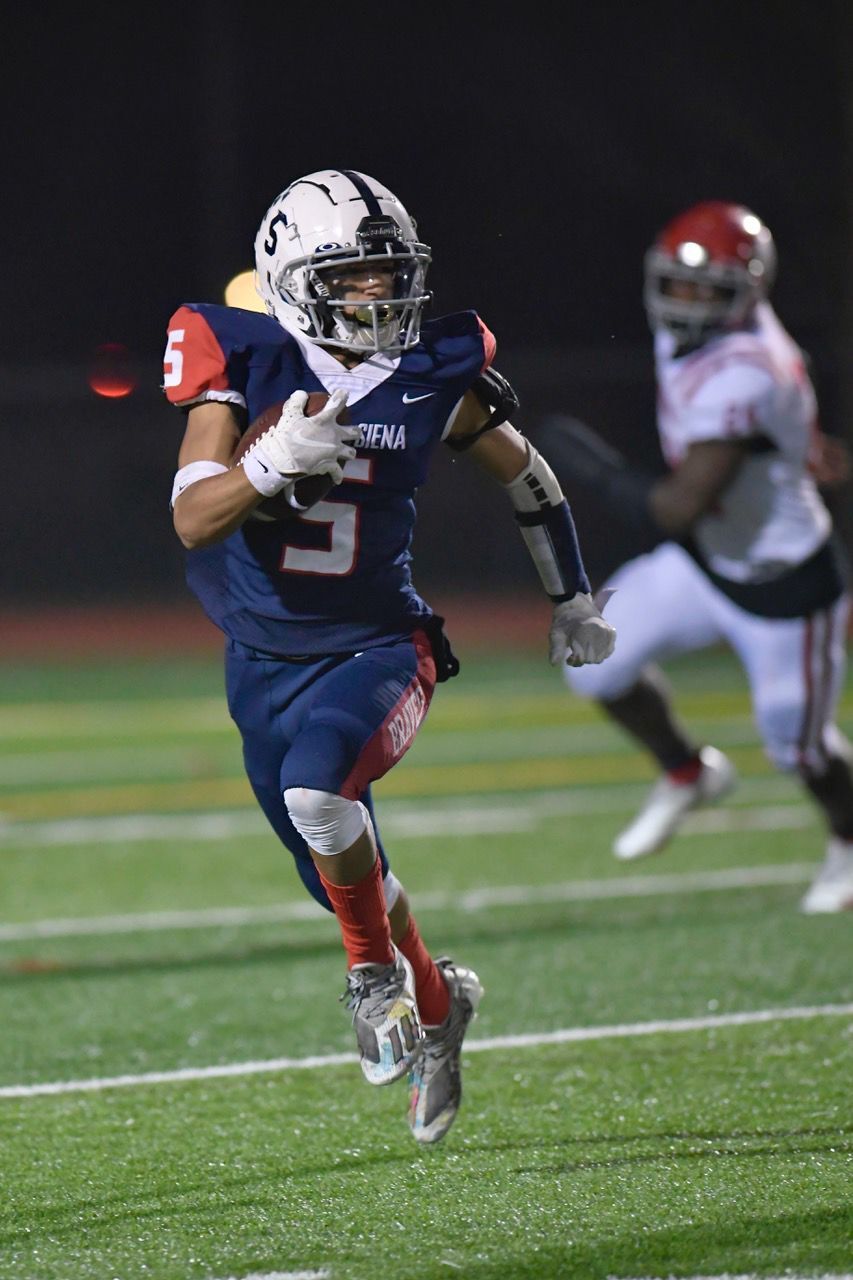 Justin-Siena's Josiah Maddalone turns on the gas against Saint Mary's on Friday night. 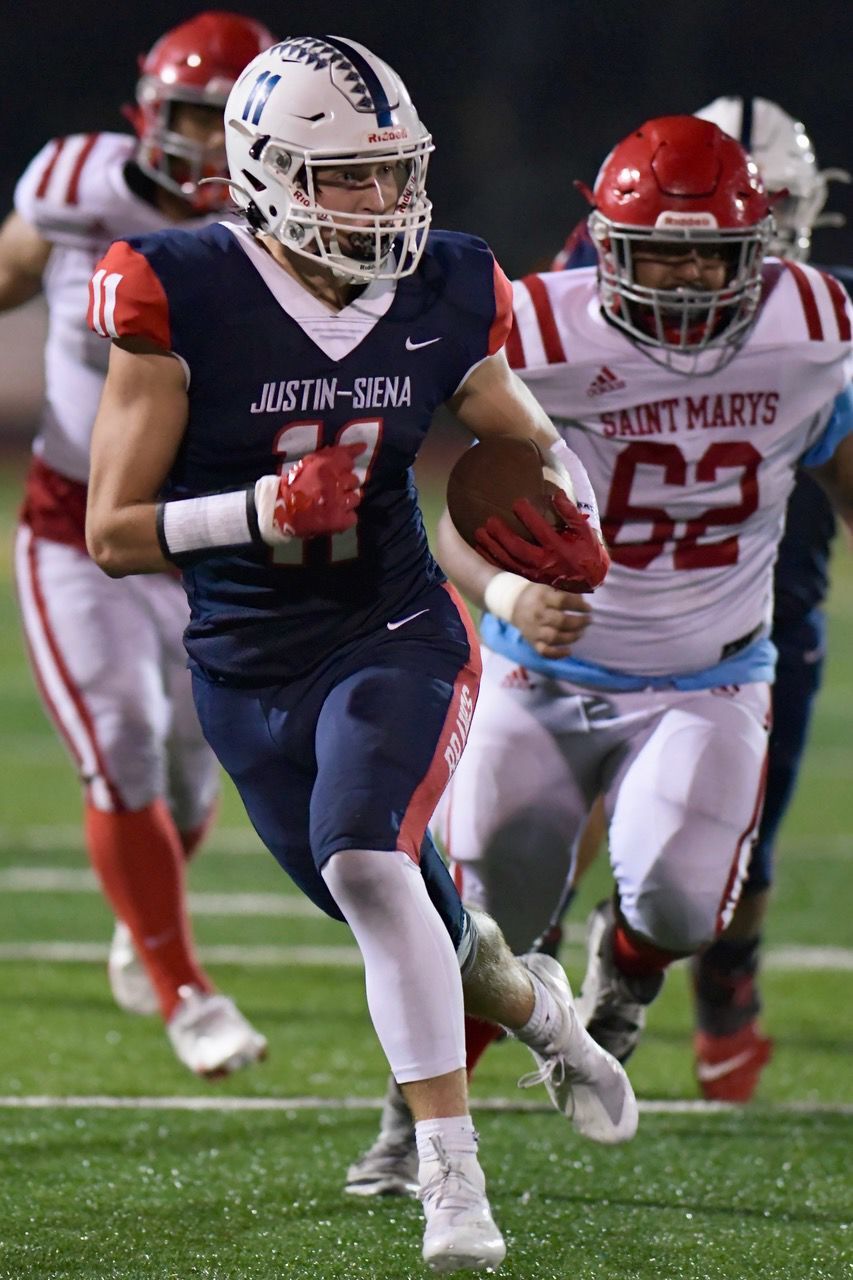 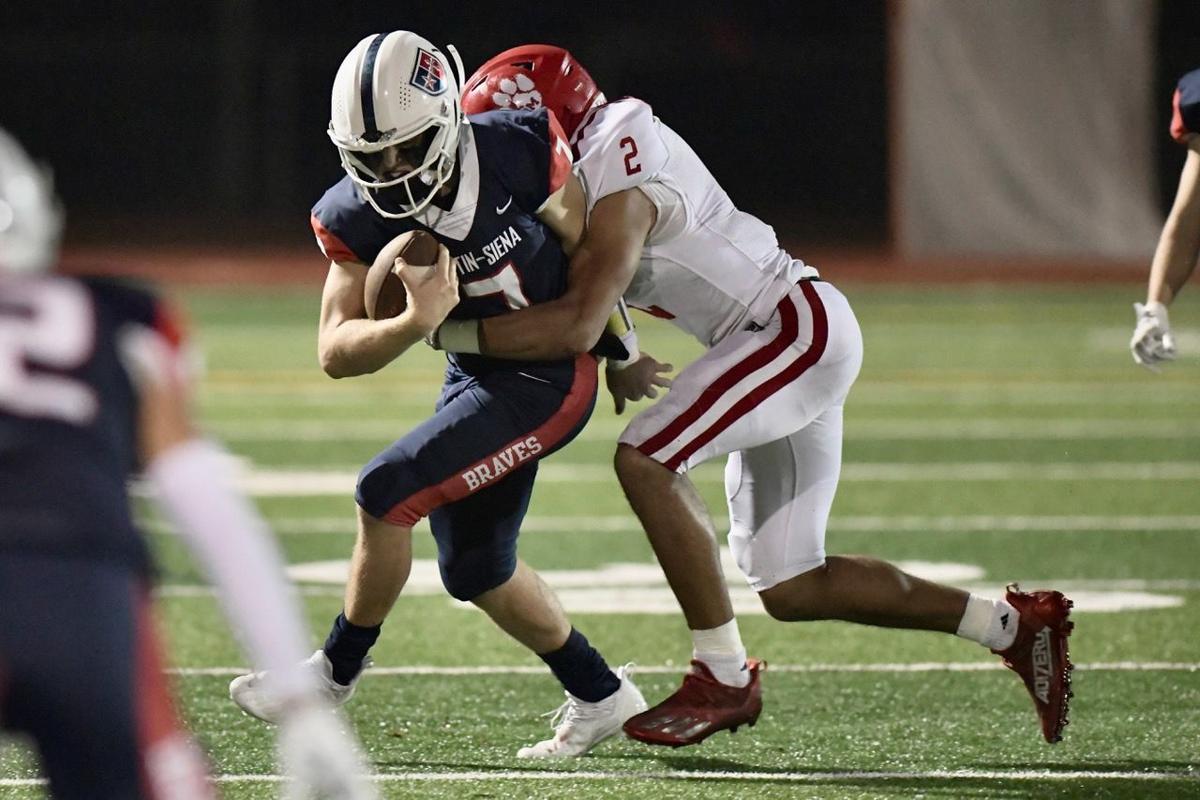 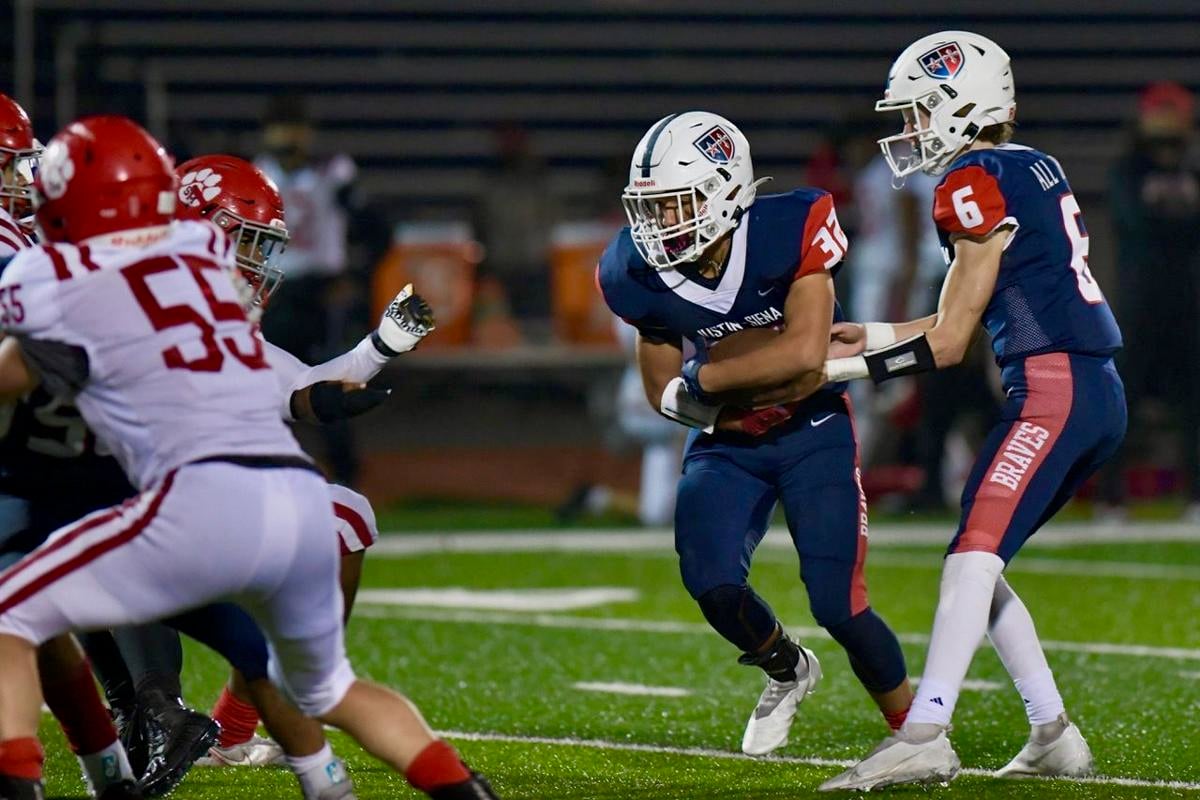 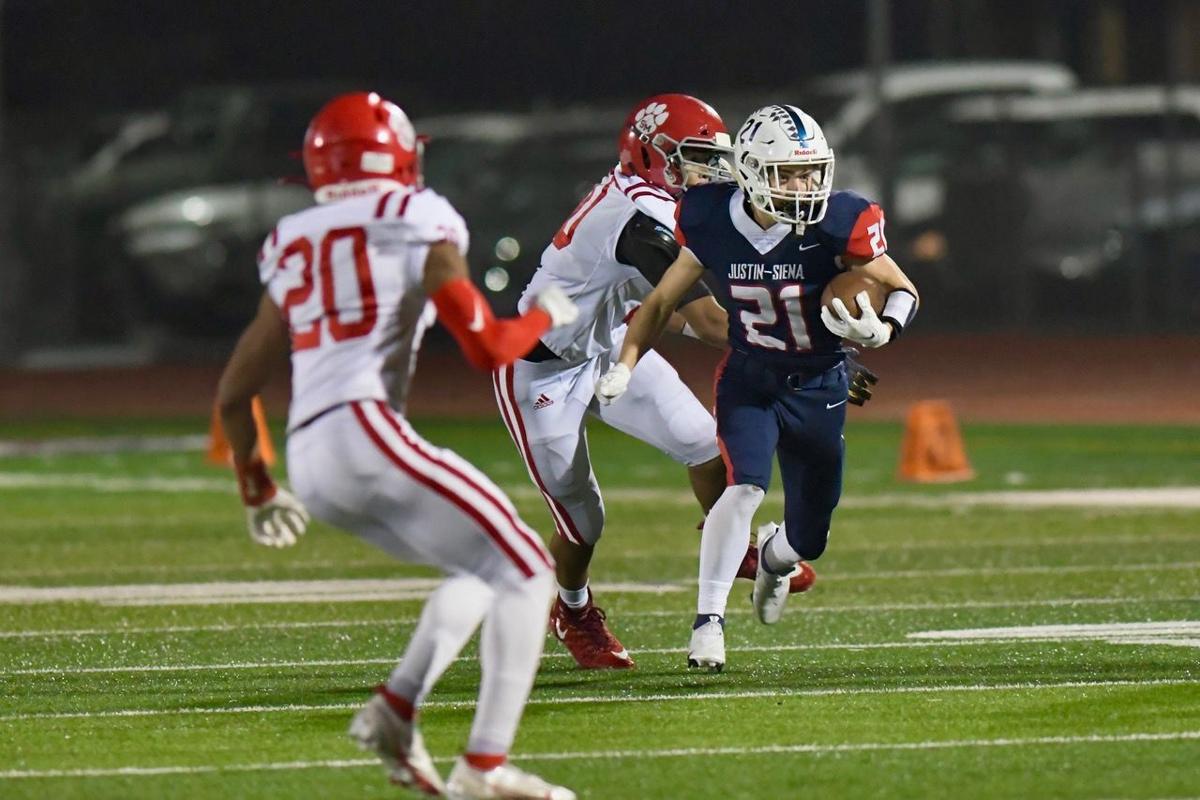 Justin-Siena's Caden Parlett picks up a big chunk of yardage against Saint Mary's on Friday night. 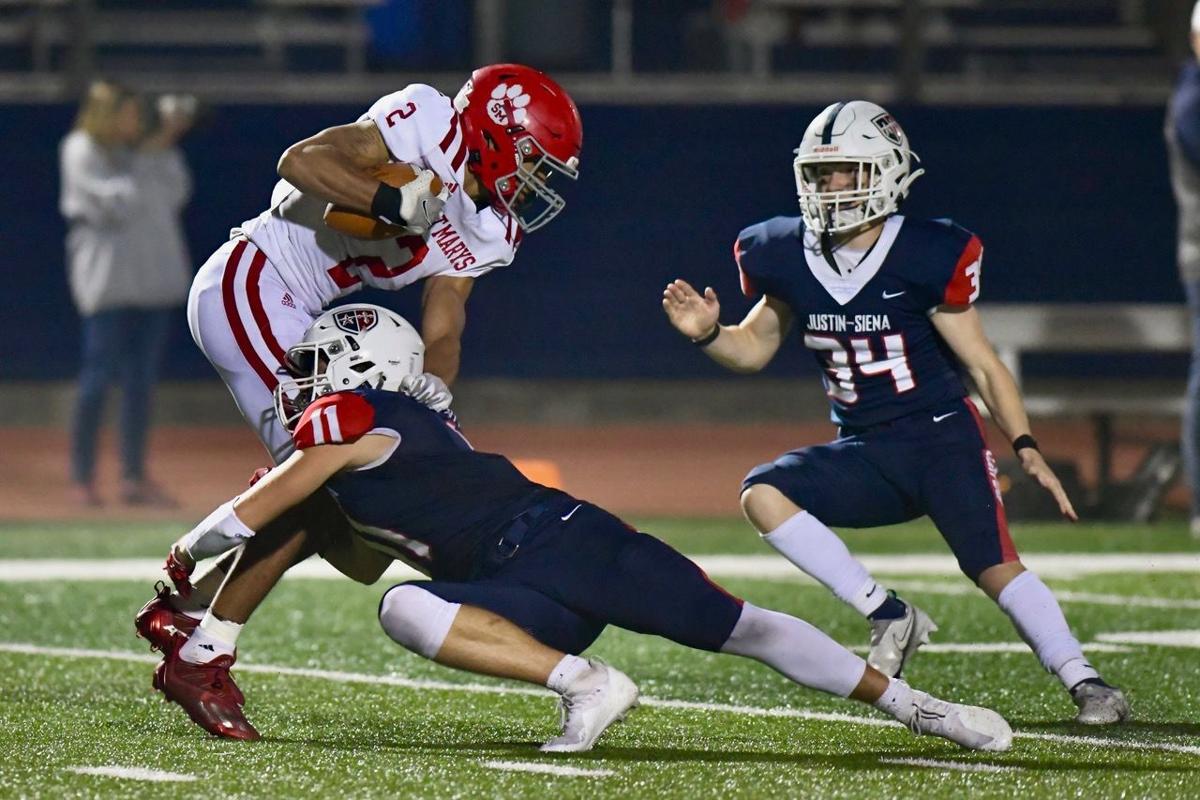 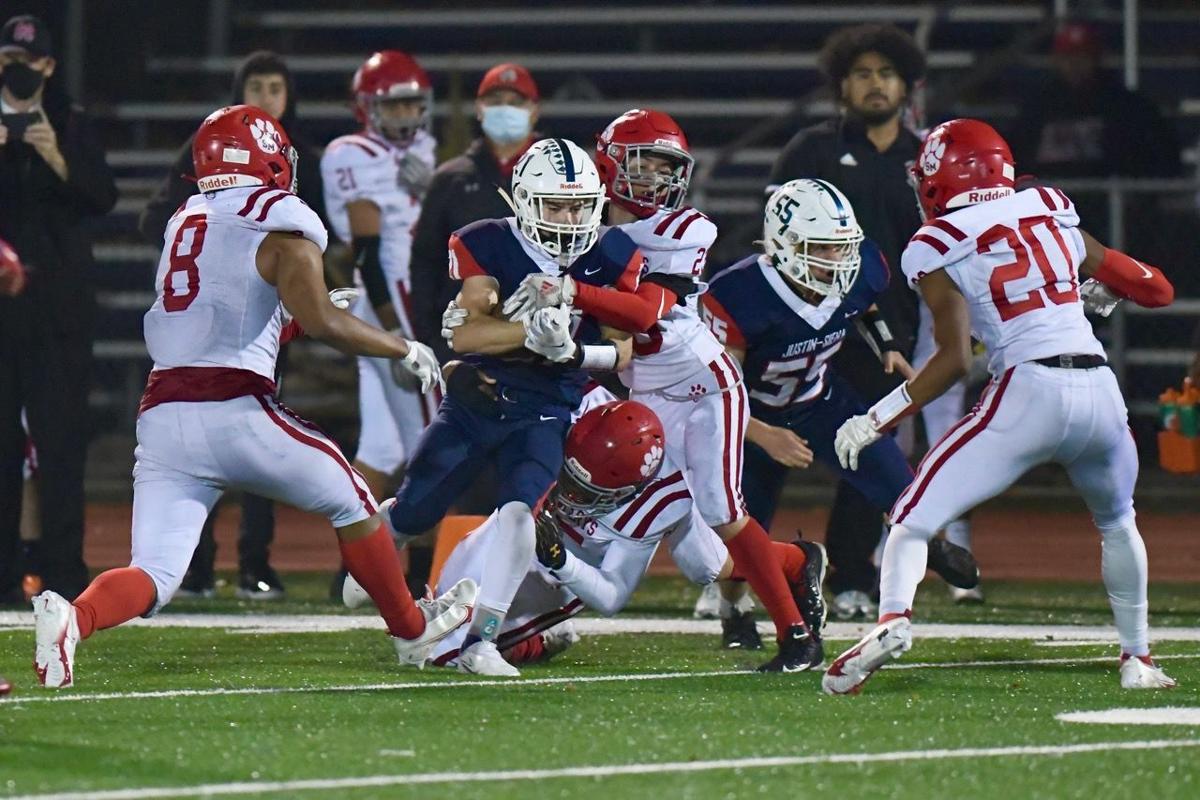 When you make it to the playoffs, it’s important to play your best game.

In Friday night’s North Coast Section Division 6 quarterfinal, Justin-Siena played what one of its standouts said was a so-so game when the Braves beat Saint Mary’s of Albany, 31-13.

The game was a far cry from Justin-Siena’s home opener back on Sept. 10th, when the Braves dominated the same Panthers, 34-0.

“Very, very sloppy. Like, we came out, we had a good game plan. We did not execute, made too many mental errors,” Justin-Siena senior running back Caden Parlett said bluntly after the game. “We weren’t playing as a team. We were playing the blame game, but we made it through the game. We made it to the next round. But if we play like that again, it's not going to cut it going through the playoffs.”

The win means the third-seeded Braves will makes their second long trip north to Humboldt County this season to face No. 2 seed Arcata next Friday night at McKinleyville High School. Arcata romped over San Lorenzo 44-0 to punch their ticket to the semifinals.

After a scoreless first quarter against No. 7 seed Saint Mary’s, Justin-Siena (6-5) opened things up. The Braves’ first score came with 10:31 left in the second quarter when Zach Zurowski scampered into the end zone from 24 yards out. Zurowski had found Parlett for a 43-yard screen pass to set up the score.

Just 18 seconds later, Robby Sangiacomo picked off a Finnian Hartney pass and returned it to the house for a 37-yard pick-six that gave the Braves a quick 14-point advantage.

“That was a big one because we had really been giving up some plays on defense,” Justin-Siena head coach Brandon LaRocco admitted. “We hadn't put up a ton of points on the board offensively, so that was a big one. Kind of felt like we took control at that point. Then we started letting it slip away in the second half.”

Before the pick-six, the Braves had their first few drives fall flat. To make matters worse, Saint Mary’s was moving the ball on them throughout the game.

Justin-Siena extended its lead to 21-0 when Zurowski found Sangiacomo for a 48-yard touchdown connection.

However, Saint Mary’s (3-7) slashed its deficit to eight points with back-to-back scoring drives. The first one ended when Hartney found Malachi Young for a 68-yard touchdown pass with 3:39 left in the first half. Out of the half, the Panthers recovered an onside kick and then went down and scored on a 20-yard touchdown pass when Hartney found Paul Wilson to make it 21-13.

But the Braves put the game away thanks to a Sangiacomo 21-yard field goal with 20.2 seconds left in the third quarter and a Parlett 6-yard touchdown run with just 5:51 left in the contest.

“We move the ball well. It’s never been about moving the ball for us. Where we struggle I think is finishing, and that happened again tonight,” LaRocco explained. “And we just can't leave points on the field and expect to win a championship. That will not work.”

Parlett once again shined on offense by rushing 20 times for 130 yards with the score. He surpassed 1,300 yards on the season with a long gain on his first carry of the contest.

Justin-Siena's Josiah Maddalone turns on the gas against Saint Mary's on Friday night.

Justin-Siena's Caden Parlett picks up a big chunk of yardage against Saint Mary's on Friday night.