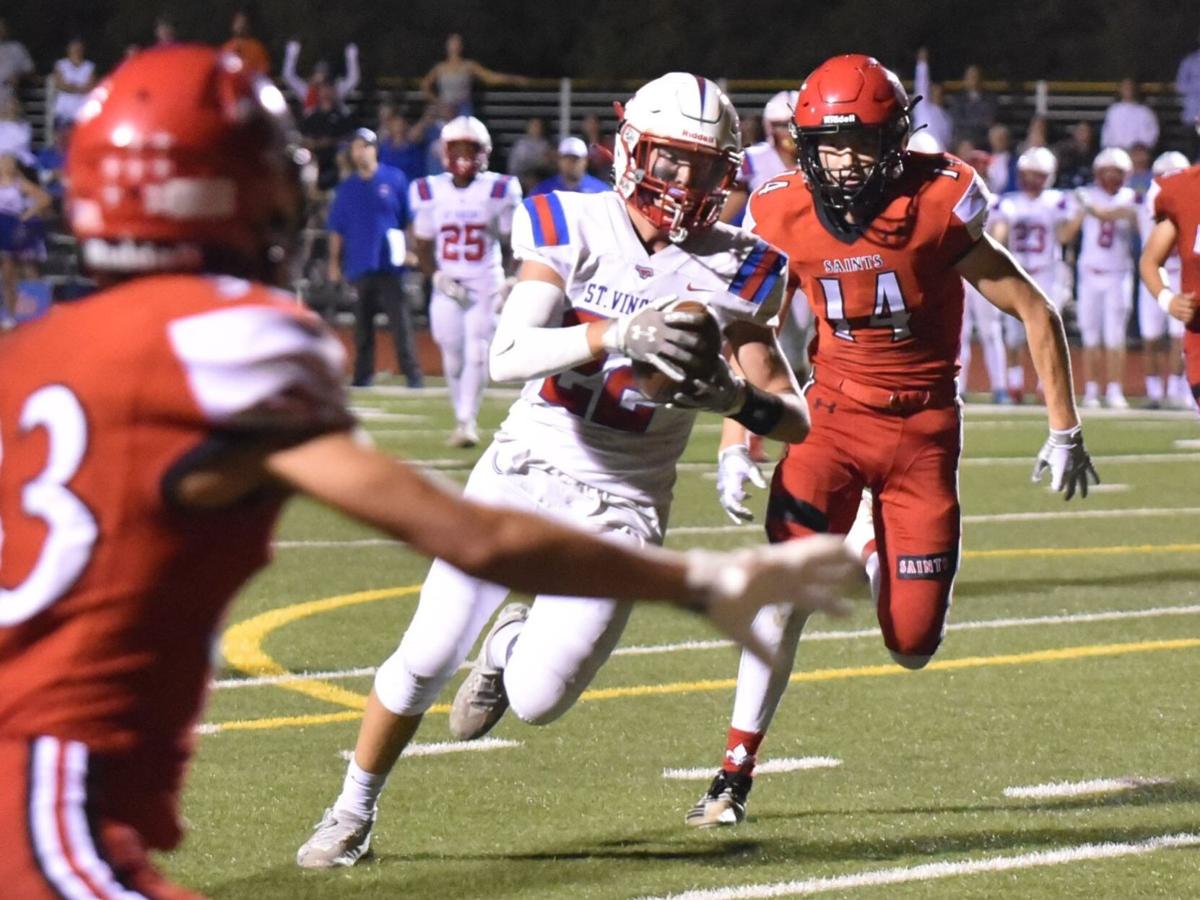 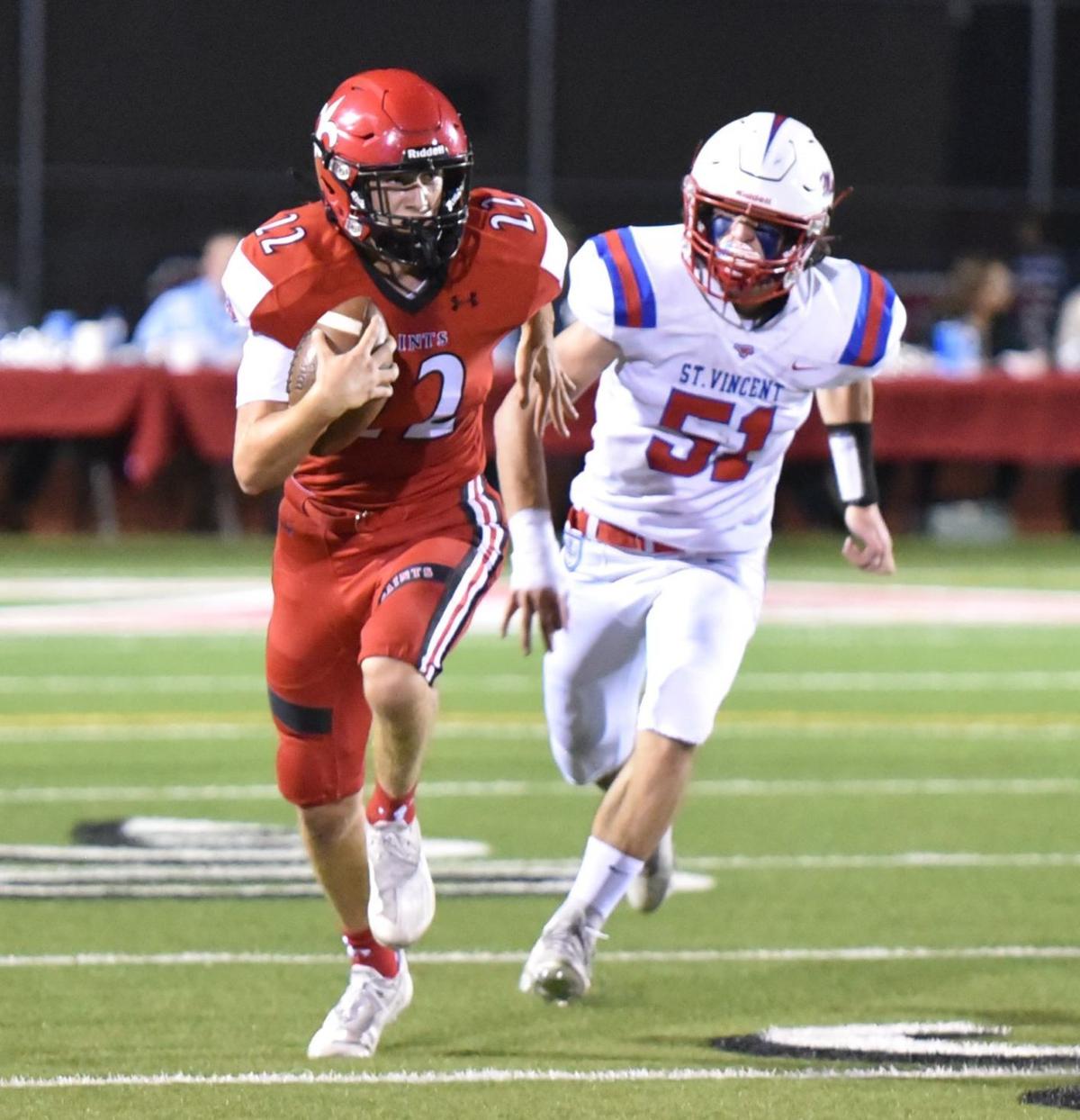 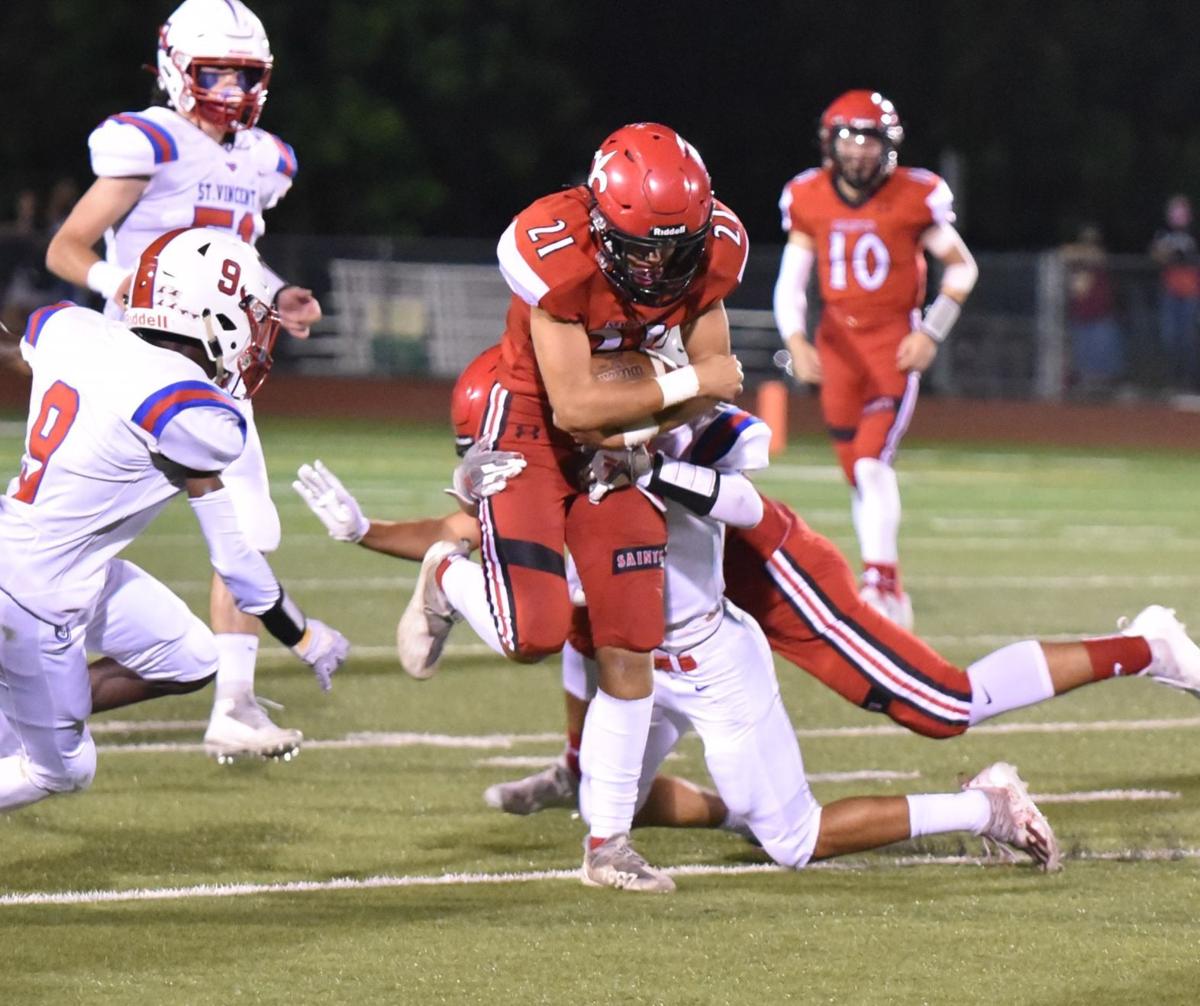 ST. HELENA — The Godfather, The Terminator and Star Wars have notable sequels.

Last Friday night at St. Helena’s Bob Patterson Memorial Field, Saints players gave head coach Ian MacMillan a water bucket victory shower that streamed down his back like Niagara Falls as Neil Diamond’s “Sweet Caroline” began blaring over the loudspeaker in celebration of their 45-13 demolition of Cloverdale in the semifinals.

The Saints had to wait about 18 hours to learn of their opponent in the title game. Without further ado, the Mustangs rallied for a 25-20 win over the No. 4 seed Clear Lake on Saturday afternoon. Although St. Helena hammered Clear Lake 40-14 three weeks before in a key North Central League I contest, the sequel the Saints wanted was against St. Vincent after the Mustangs handed them their only defeat of the season, 14-13, in a nonleague showdown on Sept. 10.

Like two freight trains ready to collide, the teams now have a 7 p.m. kickoff at Ellison Field.

The Saints have won eight in a row since the loss, going 6-0 in the NCL I to win their first outright league title since 2011. St. Vincent finished in a three-way tie for the North Bay League Redwood title with Montgomery and Santa Rosa, its lone defeat being a 30-21 setback to Montgomery five weeks ago.

St. Helena would love nothing better than to avenge the earlier defeat by delivering the program’s first section title since 1977. The Saints last played in a section title game in 2014, losing 14-7 to Salesian in the NCS Division 5 title game in Richmond.

“As coaches, you want another shot at somebody that has beaten you. But in terms of thinking like that, it’s who we have to play so it doesn’t take us out of our game,” MacMillan said, referring to the revenge angle. “We just have to go to the drawing board and figure out what we are doing well and how we can adjust the things we’re not doing well.”

MacMillan added that the week of practice will present a different routine in that there is no school because of the holiday break.

“I told them that not many teams get to practice on Thanksgiving,” he said. “That’s a special day that we have as far as having families there.”

In the season’s first meeting, the Saints turned the ball over three times and had an extra point go afoul on a bad snap. MacMillan knows his team will have to win in the margins for the program to secure their first section title in 44 years.

“Against someone as talented and well coached as they are, you have to tackle well and play good special teams,” he said. “We have to be able to keep our defense off the field. They are physical. They know their assignments.”

In an era when many teams operate out of the shotgun formation, St. Helena runs its Houston split back veer offense from under center with a trifecta of prolific ball carriers — running backs Harrison Ronayne (108 carries, 1,019 yards, nine touchdowns) and Ivan Robeldo (81-944-17) and quarterback Spencer Printz (73-632-11). The Saints have amassed 3,405 yards rushing as a team behind offensive linemen Cal Lehman, Jorge Gonzalez, Orlando Segura, Alexzander Svenningsen and Jadon Meyer and tight end Henry Dixon.

Although St. Helena seldom passes the ball, Printz has been amply efficient when called upon in completing 36 of 54 attempts for 640 yards and eight touchdowns with just three interceptions. Charlie Knight (15 catches, 169 yards, one touchdown) and Dixon (9-164-2) have been his primary targets.

Defensively, the Saints appear to have achieved their comfort level under coordinator Steve Vargus, who is in his fourth season. As great as Robledo has been at running back in annihilating the school’s record book, he has been equally if not more outstanding at linebacker as he leads the team with 107 tackles — seven for lost yardage — and has three interceptions.

St. Helena’s defense will face a diversified offense. The Mustangs have rushed for 2,331 yards and have thrown for 1,086 on 105 attempts with the combination of junior quarterbacks Jaret Bosarge and Eddy Stone.

“They have some special kids in terms of who touches the ball,” MacMillan said. “They can throw the ball really well. We were able to shut down their run, but they got some key third downs with their quarterback.”

“As a defense, we try to stop the run. It’s the key to high school football,” MacMillan continued. “It’s going to be a challenge to stop them, but their quarterback can scramble around. We have to put ourselves in situations on offense where we don’t have third and long. That’s what they did to us last time. We have to understand that there’s nothing wrong with getting 3 yards.”

On defense, the Mustangs present multiple fronts between a 5-3 and 4-4. Antonini has 96 tackles, 23 for losses, and six sacks. Senior Jake DeCarli has 87 tackles, with 12.5 coming for losses, followed by junior Nathan Rooks with 74 tackles, 16 for losses.

Key to the Saints’ success are assistant coaches Rich Cotruvo, Steve Shifflett, Brendan Shanks and the aforementioned Vargus. MacMillan worked with all of them during his time at Justin-Siena from 1999-2003. Cotruvo was the Braves’ head coach from 1997-2016.

MacMillan is in his second stint as St. Helena’s head coach, having previously been at the helm from 2004-2006 before returning as the JV head coach in 2017. In between, he had two stints as an assistant at Napa High under former head coach Troy Mott along with being the first head coach at American Canyon. Shifflett and Vargus were already on the Saints’ staff under longtime head coach Brandon Farrell, who is now St. Helena’s athletic director. When MacMillan replaced Farrell, he added Shanks and Cotruvo.

“The nice thing is that we all know each other as far as sense of communication, in terms of what everyone is thinking,” MacMillan said. “We have the ability to come up with a game plan because we’ve worked together and have experiences. We take advice from each other.”

Throughout the 2010s, the Saints were a regular playoff participant with nine appearances and seven postseason wins. Completing the journey would be meaningful.

“I know it would be big for the community, but also how special it would be for the seniors with everything they’ve had to go through,” MacMillan said of the COVID-19 pandemic. “They didn’t have a junior season. You look at how much of a family we’ve become, and the memories they are making together is something special. In terms of the community, I know it would bring a lot of pride. That’s the nice thing about being in a small community, you know everybody.”

Saints players hope to be in position to give MacMillan one more victory shower in Saturday’s sequel.