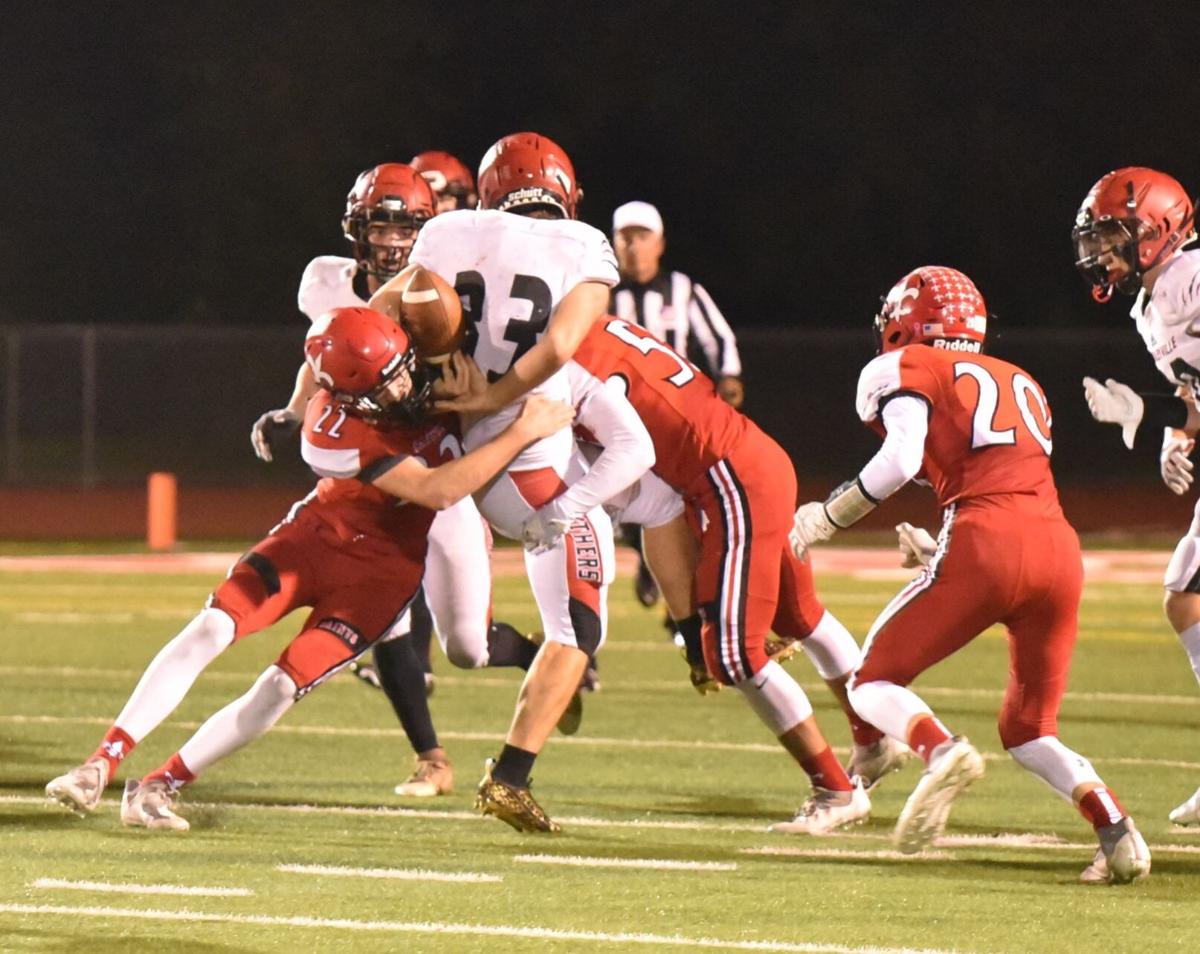 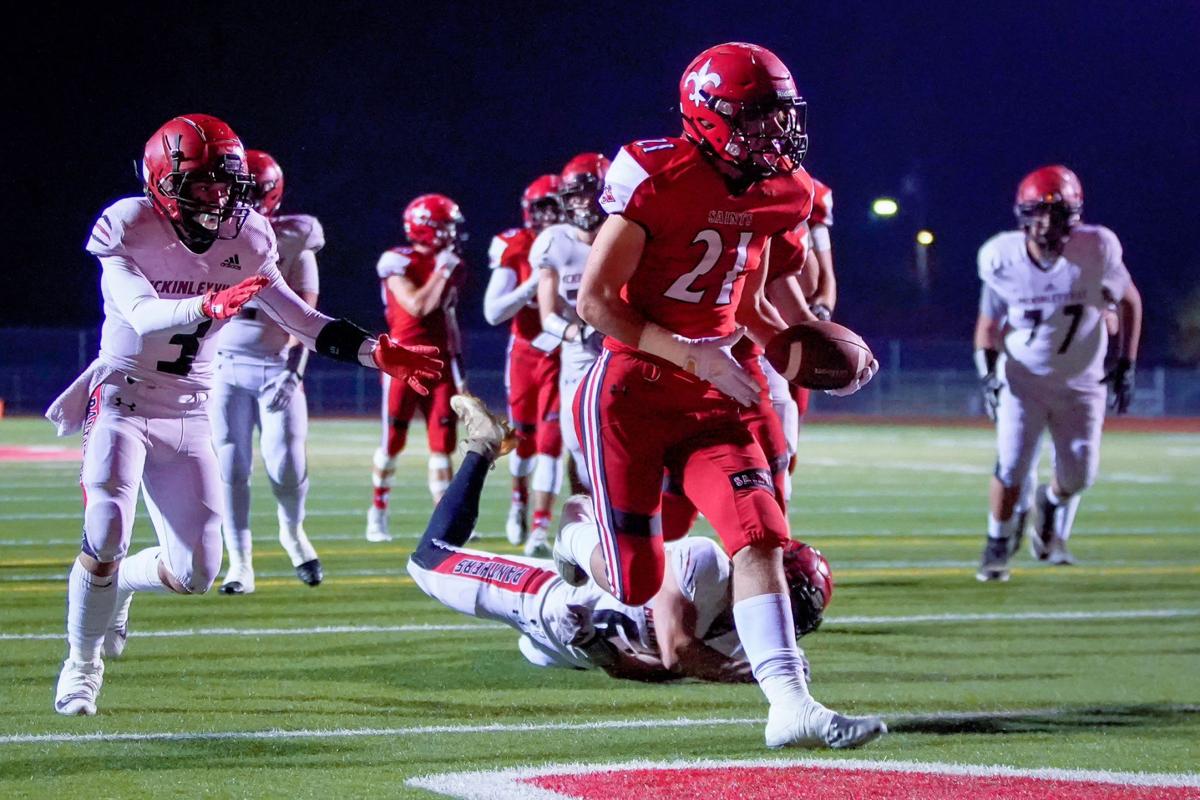 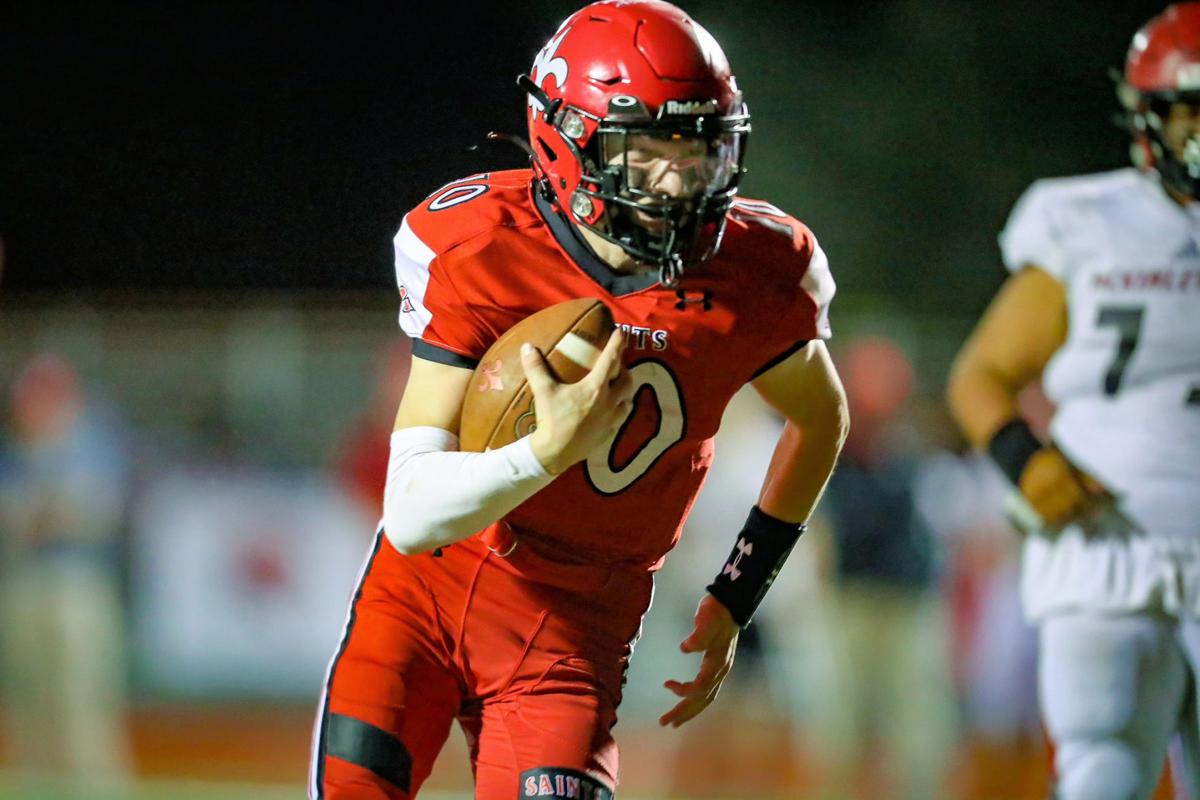 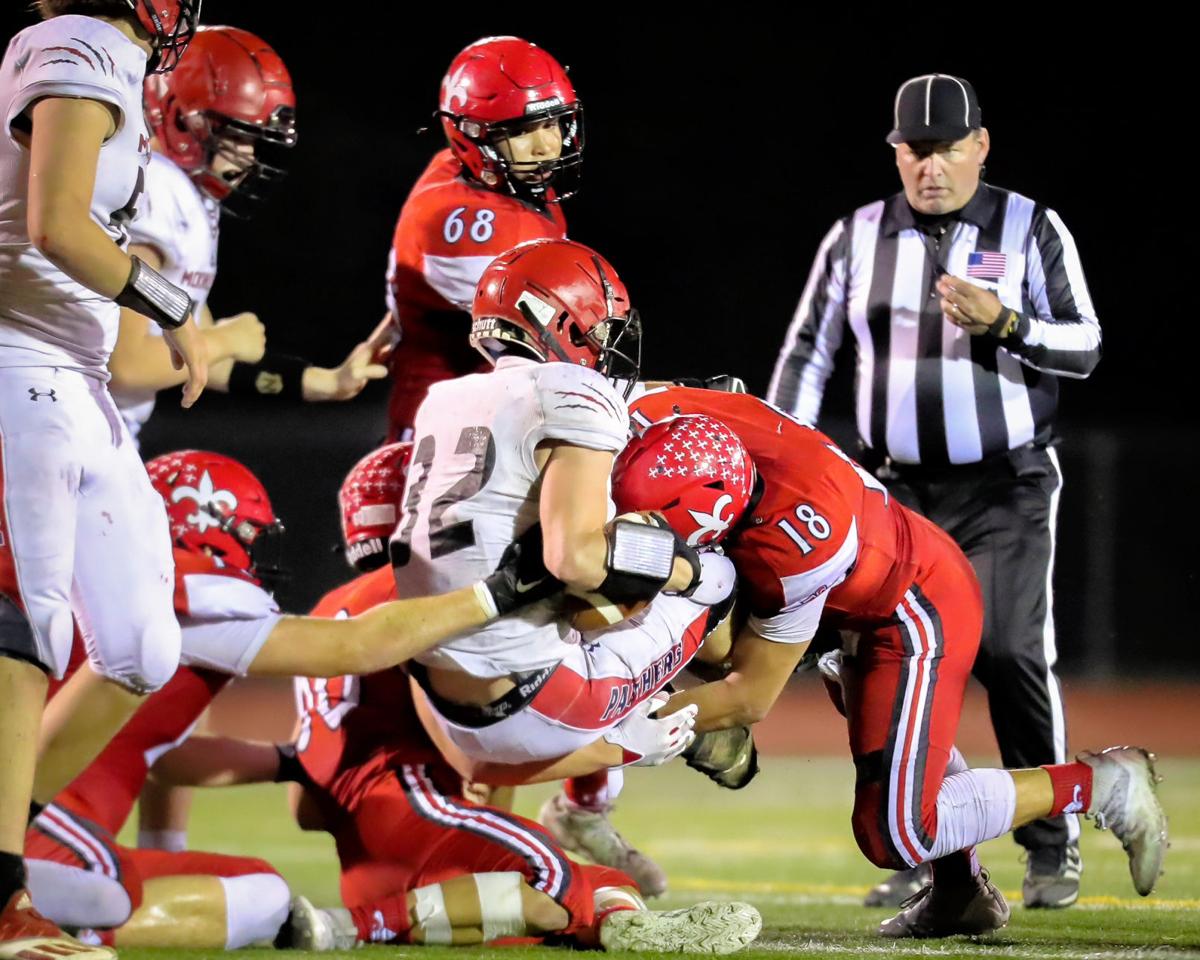 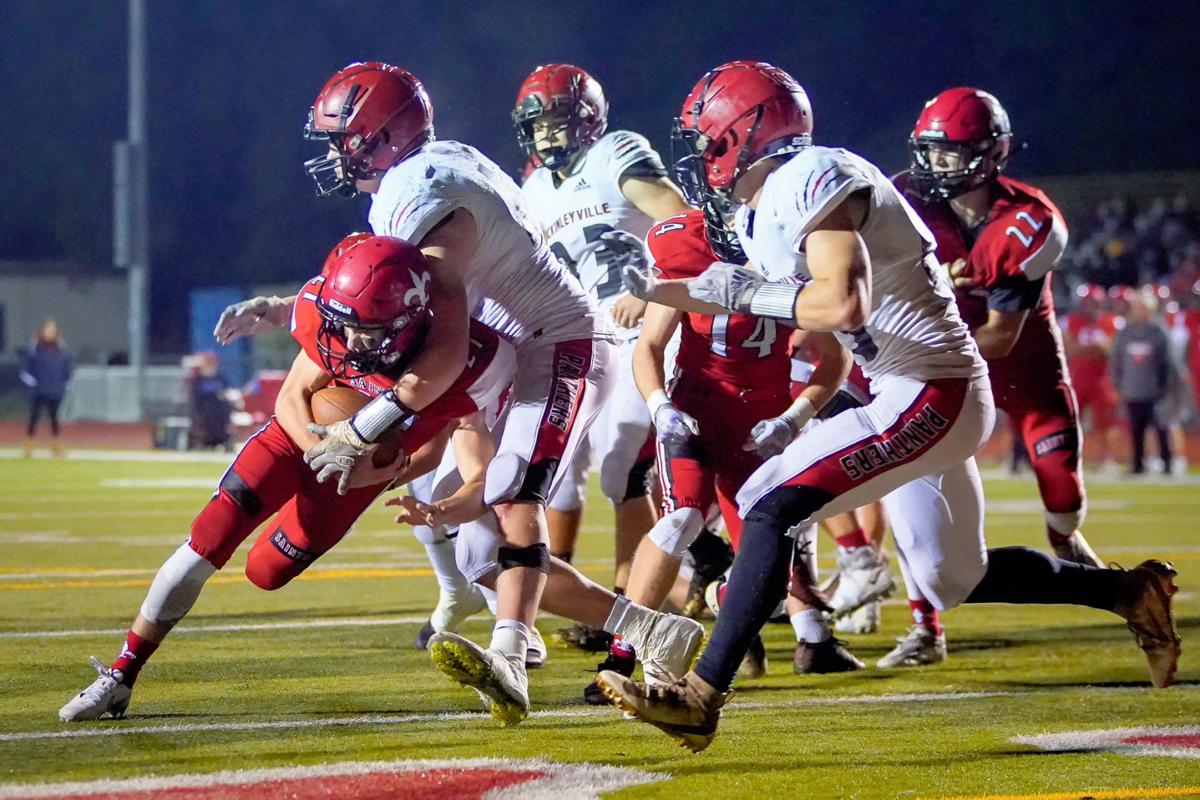 St. Helena's Harrison Ronayne (21) scores his third touchdown against visiting McKinleyville to make it 40-0 with 1:05 left in the first half of Friday night's North Coast Section Division 7 playoff game. 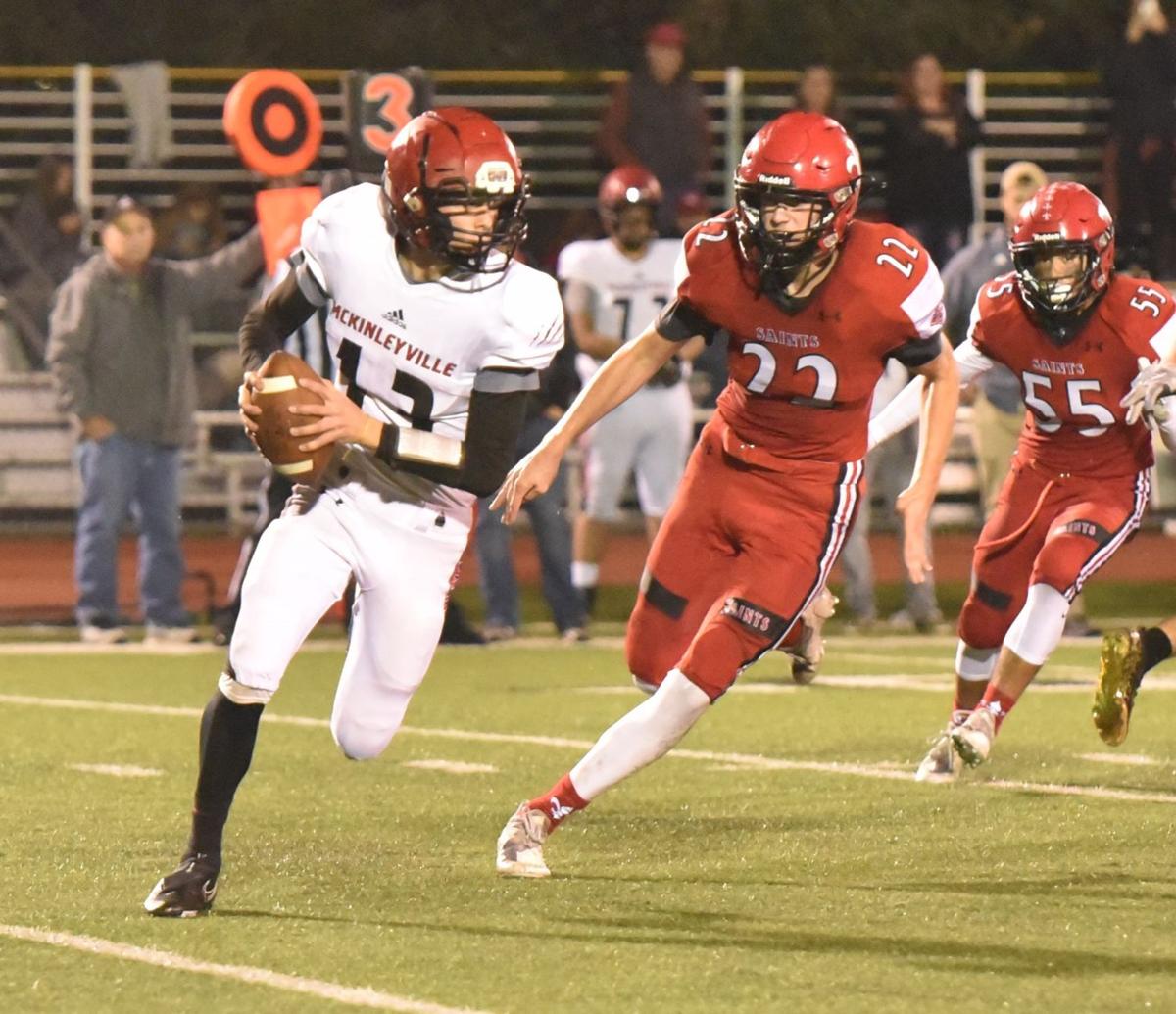 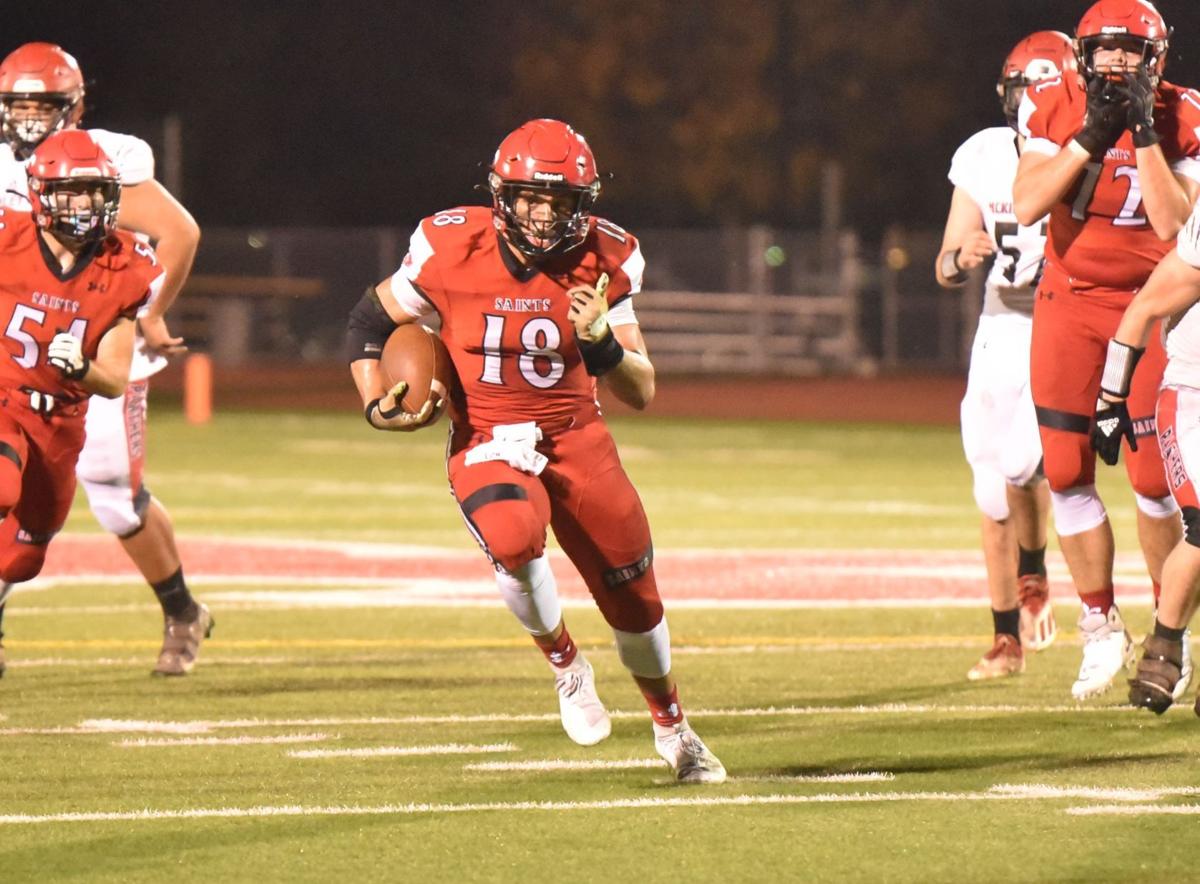 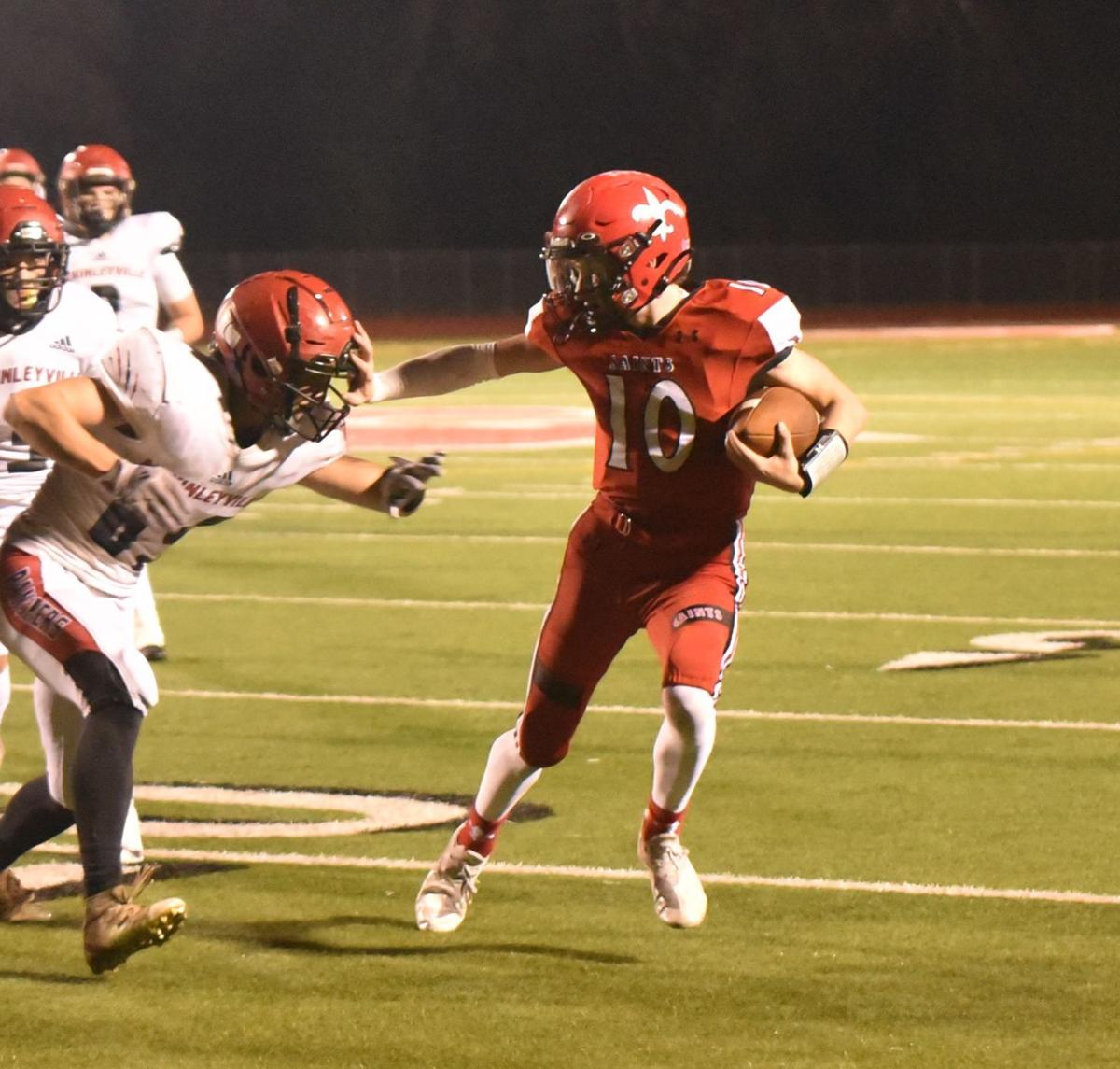 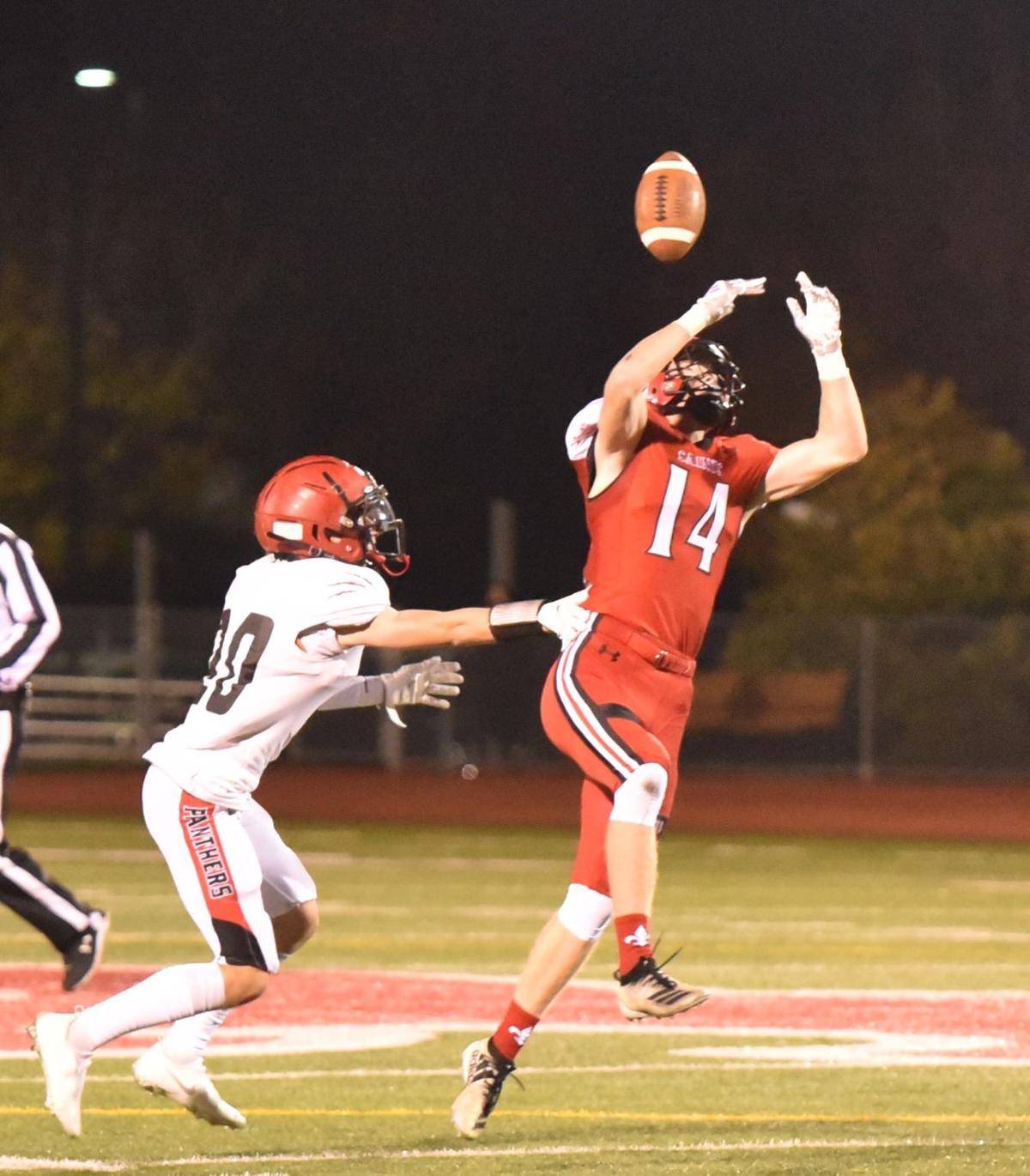 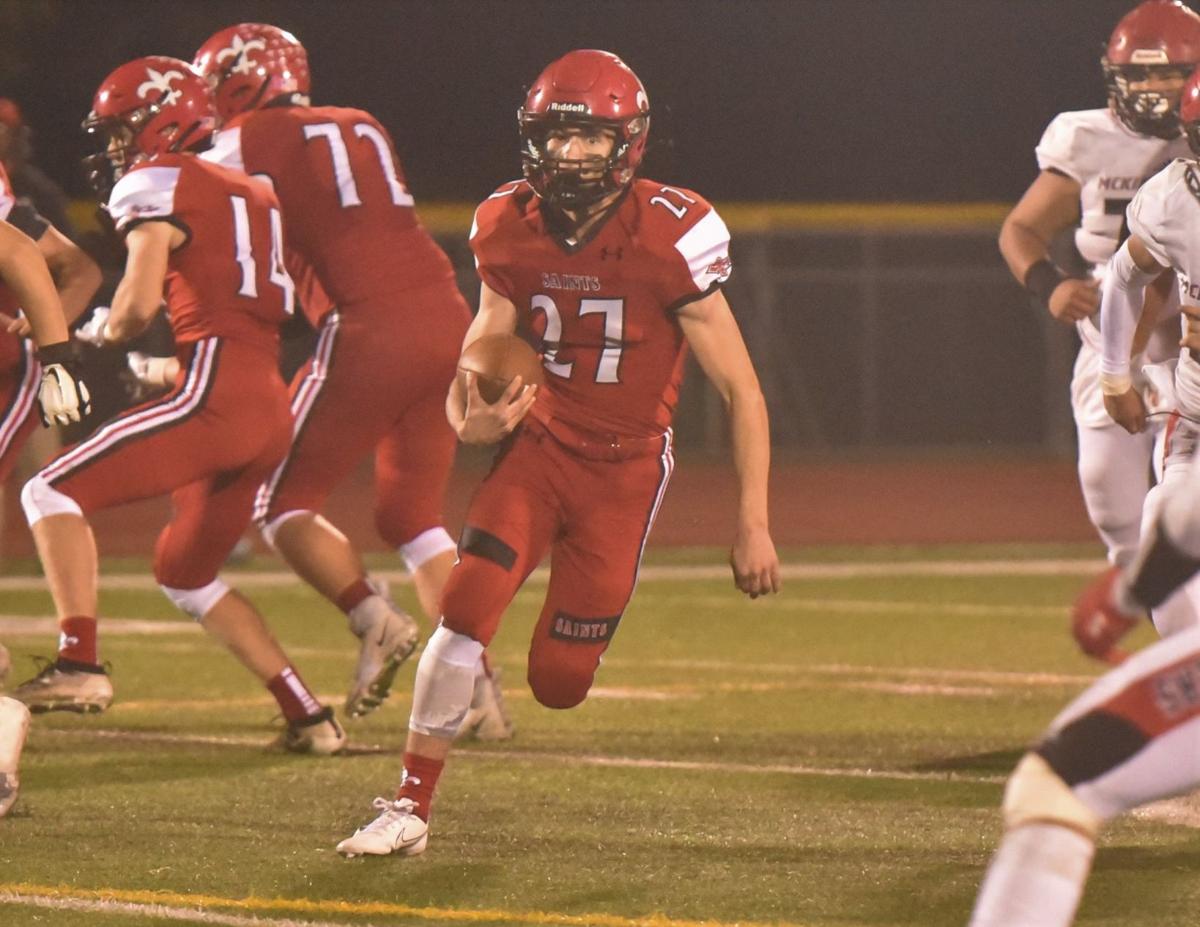 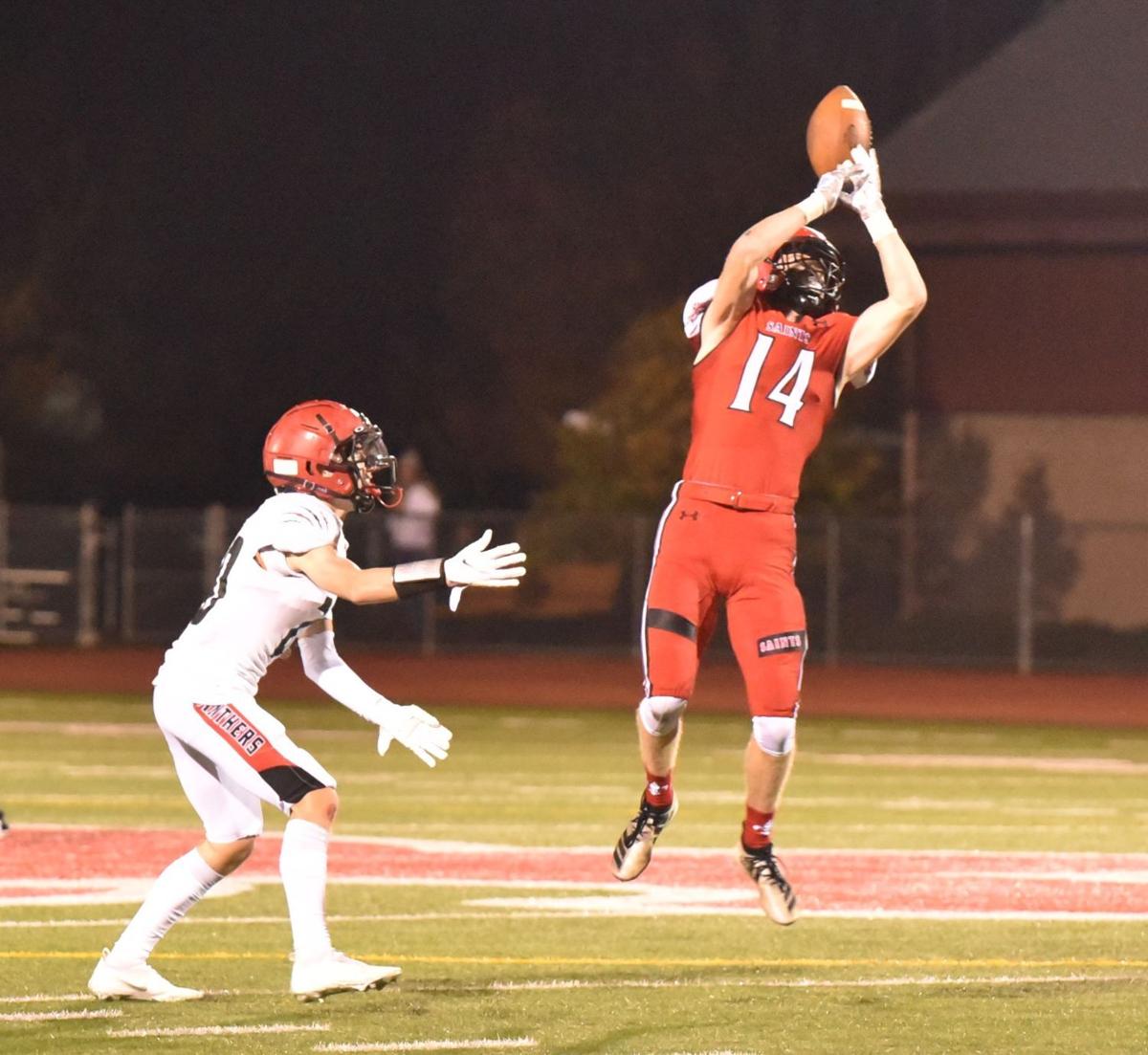 ST. HELENA — Like the crane that does the heavy lifting at construction sites, Clayton Crean — whose last name is pronounced the same — gave the St. Helena High football team a lift at the start of Friday night’s North Coast Section Division 6 playoff opener.

The 5-foot-10 junior took the opening kickoff and galloped 93 yards to paydirt to put the second-seeded Saints in business en route to a 48-6 trouncing of No. 7 McKinleyville at Bob Patterson Memorial Field.

Francisco Arias added the first of his six extra points for a 7-0 lead with a mere 13 seconds elapsed in the game.

“I just dreamt of running the opening kickoff back for a touchdown,” Crean said. “I just saw the lane open up, ran toward the sideline and got it. There was a gap on the outside, so I took advantage.”

With the win, the Saints (9-1) earned another home playoff game, hosting No. 3 seeded Cloverdale in next Friday’s semifinals. The Eagles (6-4) outlasted Berean Christian of Walnut Creek in their opener Friday night, 28-26.

The 42-point margin of victory ties the largest in St. Helena history in a playoff game. The 1975 Saints first achieved it in a 42-0 rout of Calistoga.

“That’s a huge play for us in terms of momentum and setting the tone, especially with the routine being broken,” Saints head coach Ian MacMillan said of Crean’s return for a touchdown. “We had no school (because of Veterans Day) on Thursday or Friday. With the first playoff game, the stands aren’t full yet because there’s no JV game. The routine is messed up, so when you can start off like that, it gives everyone a lot of energy.”

Crean was also the Saints’ leading ground gainer with 113 yards on 14 carries and two touchdowns, from 1 and 4 yards away.

“The offensive line was amazing,” Crean said. “They were getting to their assignments and giving me the opportunity to get yardage.”

“Rich Cotruvo (St. Helena offensive line coach) works really well with those guys as far as communication, so they know where they’re going and what they’re doing,” MacMillan said. “The defense that we see in the game is not always what we prepare for. It’s been a constant all year long and that’s a tribute to the O-Line. They have to figure it out and problem-solve amongst themselves. Rich and them have done a great job of getting on the same page as far as what to communicate and how things should work.”

Other than when the Panthers averted a shutout on Cole Vanderplas’ 11-yard touchdown pass to Mettah Kusta with a minute left in the third quarter, St. Helena’s defense muzzled McKinleyville’s offense. The Saints allowed 88 yards of total offense on 44 plays. St. Helena also capped its scoring with a defensive touchdown, when Meyer returned an interception 25 yards for a touchdown midway through third third quarter.

The Saints’ defense had an ample number of individual standouts. Ronayne had two tackles for loss and Vincent Altemus had one. Meyer led the team with four impact tackles (gains resulting in 1-3 yards), Ronayne and Lehman each had three, Robledo and Crean had two apiece, and Gonzalez, Dixon, Fernando Diaz and Charlie Knight each had one.

Though the Saints have played defense with the wind at their backs throughout the season thanks to big leads, MacMillan added that the unit’s ability to shine is a strong reflection of defensive coordinator Steve Vargas’ tutelage.

“Varg has been doing this for a long time,” he said. “I just let him do his thing and stress the importance of it. They have bought into that, taking pride in the defensive side of the ball and their ability to stop people.”

Two more steps remain in the Saints’ journey to their first section title in football since 1977. The next one comes against a Cloverdale team that St. Helena demolished 49-6 in a league game on the road five weeks ago.

MacMillan, however, is making no assumptions based on past outcomes.

Starting with a Crean, the Saints kept their dreams alive of lifting a section title trophy.

St. Helena's Harrison Ronayne (21) scores his third touchdown against visiting McKinleyville to make it 40-0 with 1:05 left in the first half of Friday night's North Coast Section Division 7 playoff game.