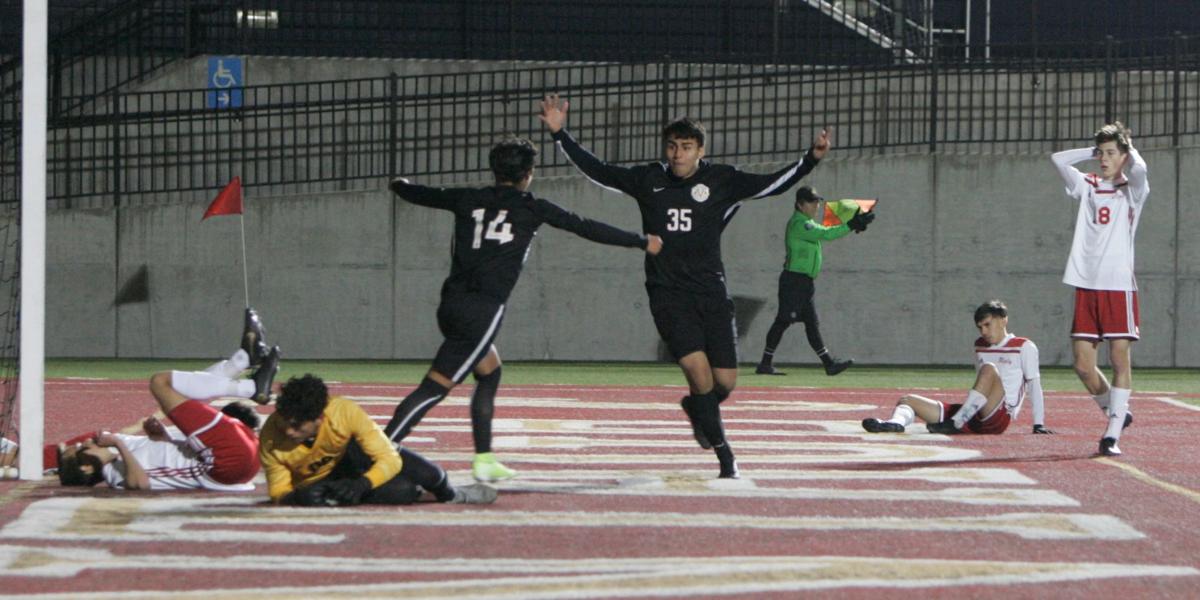 Anthony Enriquez (35) celebrates after Yahir Escalona (14) scores on his assist for a late 1-0 lead over Clayton Valley Charter during Saturday night's playoff game. 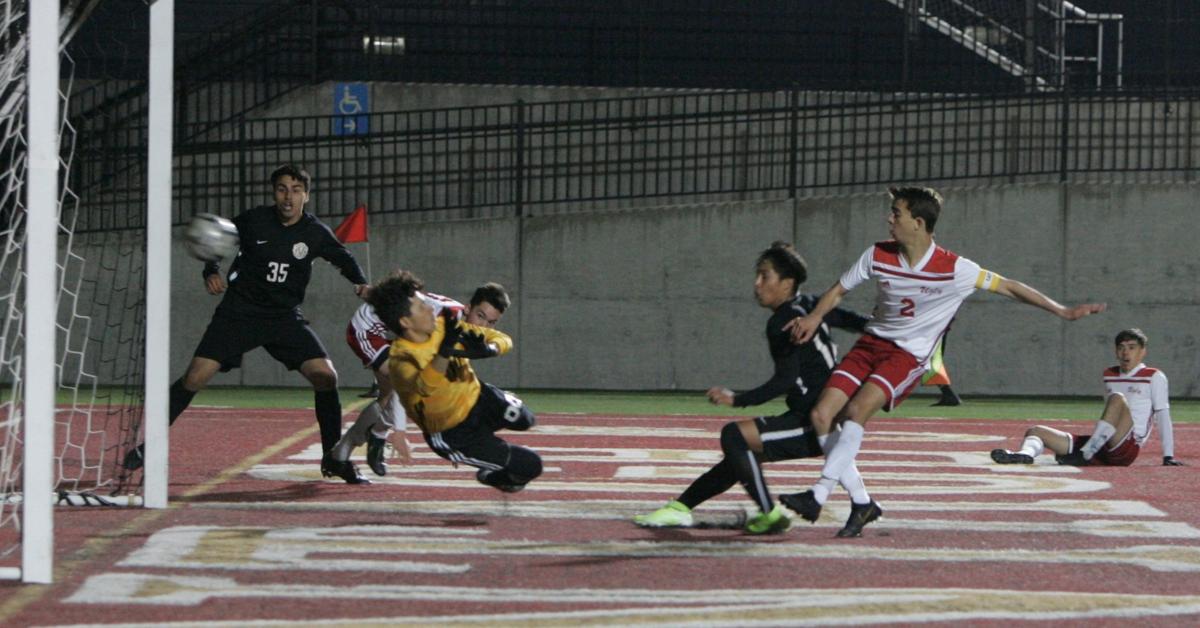 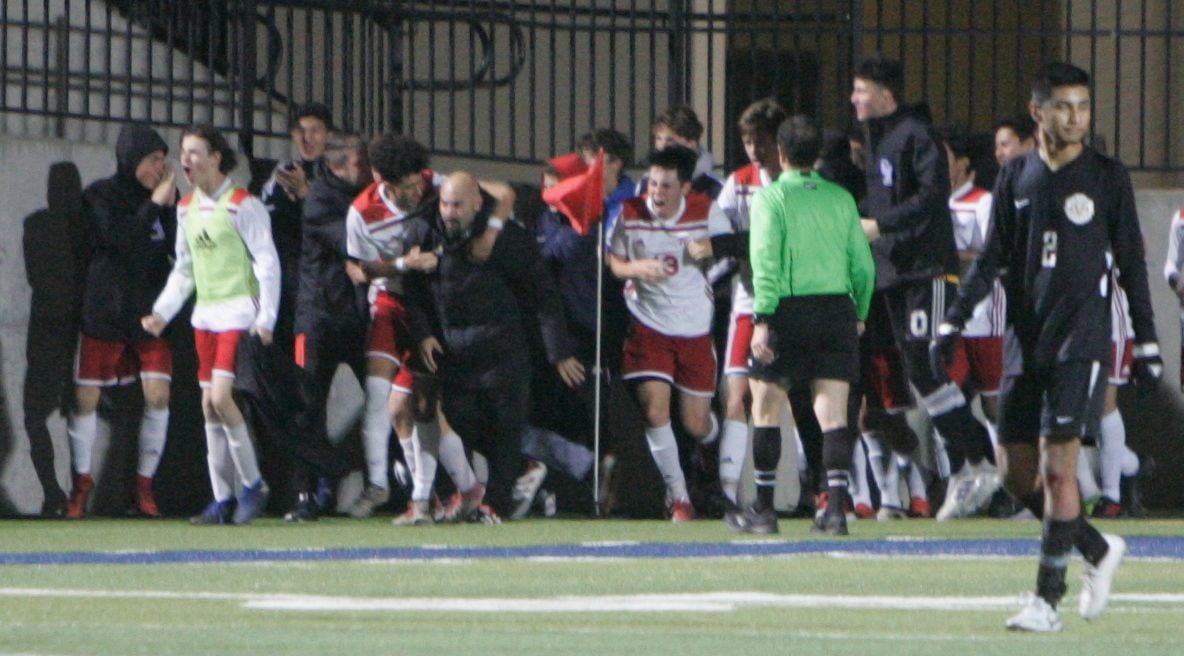 As members of Vintage High’s young boys soccer team slinked off to the team room at the north end of Memorial Stadium after a season-ending 2-1, double-overtime loss Saturday night, one of their alumni talked about how his Clayton Valley Charter team pulled it off.

“On paper we knew they were going to be good,” said 2005 Vintage graduate Kevin Clark, who helped the 2004 team win the Crushers’ first section title with a goal and assist in a 3-0 win over Edison in the Sac-Joaquin Section Division I championship.

Clark, who also played both soccer and baseball for Napa Valley College, said his Ugly Eagles were fortunate that Vintage played another Concord team during the regular season and pulled out a 2-1 win with two last-minute goals.

“They played Ygnacio Valley, which is kind of our cross-town rival, so we got a decent little scouting report from them,” Clark said. “We were concerned with Vintage, to be honest, and we knew they were going to be good, but those (YV) guys gave us a boost of confidence, saying ‘We think you guys can play with them.’ That was what we needed. But we gave them a lot of respect coming into it. Our last four games have been either ties or one-goal games, tight ones, and the hardest part of our schedule, so that was nice to have leading up to the playoffs, too.”

Vintage struck first, but not until 68 minutes had passed. Anthony Enriquez, one of only three seniors on the Crushers’ squad, got past a defender on the right side and found himself in a 2-on-1 situation with the goalkeeper. Yahir Escalona slashed into the box, got a pass from Enriquez, and score on a shot that went left of the diving goalie.

But Clayton Valley junior Isaac Morfin tied it during stoppage time, following in a teammate’s miss after Vintage goalie Tanner Griffin had fallen down trying to block that one.

The Crushers (17-4) hadn’t had a tie all season, and this one would be broken during the second of two 10-minute overtime periods. The teams didn’t have to play the entire overtimes. The first goal would end it, and Morfin got it by scoring on cross a few minutes into the second extra period.

“You look at the shots on target and possession, I would say we dominated those,” Vintage co-coach Alex Feliciano said. “But it’s a game of chances and who can convert. Their keeper made a lot of big saves for them, their defenders cleared the ball off the line three or four times. Sometimes it’s not your night. It’s just unfortunate it has to happen in the playoffs.”

Vintage sophomore standout Landon Leal Ruiz booted most of Vintage’s dozen or so corner kicks, but didn’t get left alone in the field much.

“You can’t really key on one forward with them, so we were actually more concerned with their midfielder, No. 16,” Clark said of Leal Ruiz. “He was our focus when we were game planning. We knew they like to keep their wingers nice and wide, so we were aware of them. But we knew if we could stop the service (Leal Ruiz’s crosses), because he’s the guy who usually plays those balls, then maybe we can kinda contain them a little bit.

“We have only two tall guys; the rest of them are scrappy. Typically we aren’t the greatest team in the air and that was our fear. We knew they had size and saw how dangerous they were on some of their set pieces, but our keeper came up huge. That’s what it came down to.”

Vintage co-coach Javier Covarrubias said it was just an unlucky night for the Crushers.

“It’s tough,” he said. “It was a good game. We had a game plan and the boys followed it. We knew they were going to let us play with the ball a little bit, keep knocking it around to get movement off the ball, and we knew when they had the ball, they played for possession. So we wanted to disrupt that and force them to play long or force them into pressure and, defensively, our boys did that.

“We were able to create a lot of opportunities, especially on set pieces. There was one instance where we had five corner kicks in a row. Yahir, (Justin) Sotelo and Emma (Emmanuel Duran) had a great game on the wings. The ball just didn’t go in. But they’re a good team. The video we saw on them showed they could play nice soccer and they did a good job.”

The game had an inordinate number of yellow cards, five for Vintage and two for Clayton Valley – perhaps to avoid the kind of game Vintage had at De La Salle last month, when the Crushers had so many players receive red cards and get ejected that they had to forfeit their ensuing league game.

“It was a fun game, with two teams pouring everything they had into it,” Feliciano said. “The yellow cards in the first half kinda rattled our flow and momentum, especially the back-to-back ones. We just regrouped in the locker room and told them ‘The only team that can beat you right now is yourself; you’re executing the game plan, but you need to keep your composure, especially in the playoffs.”

“Extremely proud of this group of boys. We went through a lot this season, a lot of ups and downs and a lot of people writing us off, maybe thinking we were a bunch of bad boys or we were going to fight because of what happened at De La Salle. We just had to prove it game in and game out what type of character we have, the brotherhood we have.”

Feliciano got choked up as he continued.

“If you could have heard what they had to say after the game (in the private team meeting), you would know it’s a family,” he said. “You go through these wars, these battles, and it creates these strong bonds. They pick each other up. It was a hell of a season and nobody was ready for it to end. Unfortunately, it can be a cruel sport.”

Many Clayton Valley players consoled Vintage players after the game.

“We reached out to their coach after the game and we both agreed we should do this again (in next year’s preseason),” Feliciano said.

Anthony Enriquez (35) celebrates after Yahir Escalona (14) scores on his assist for a late 1-0 lead over Clayton Valley Charter during Saturday night's playoff game.