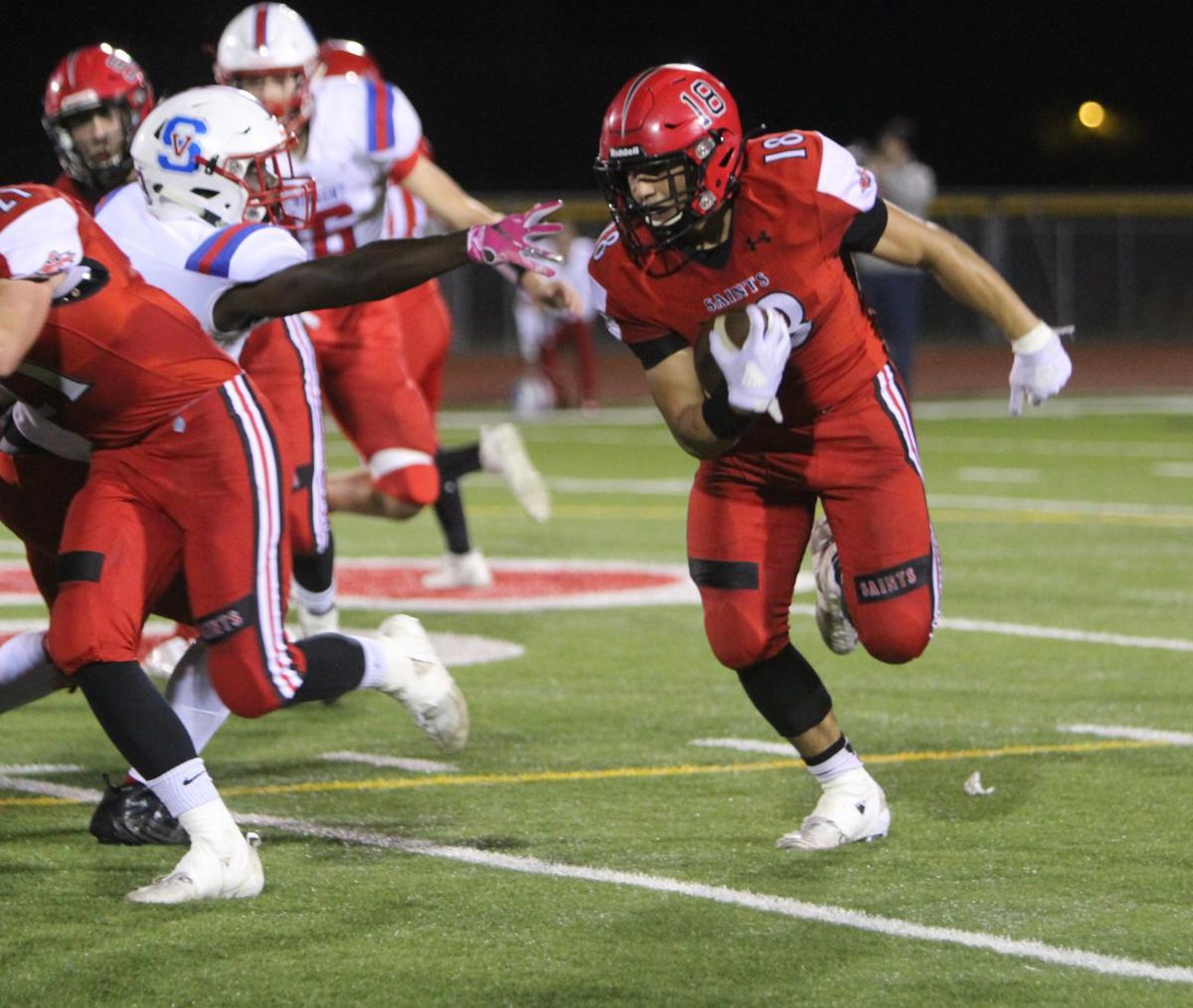 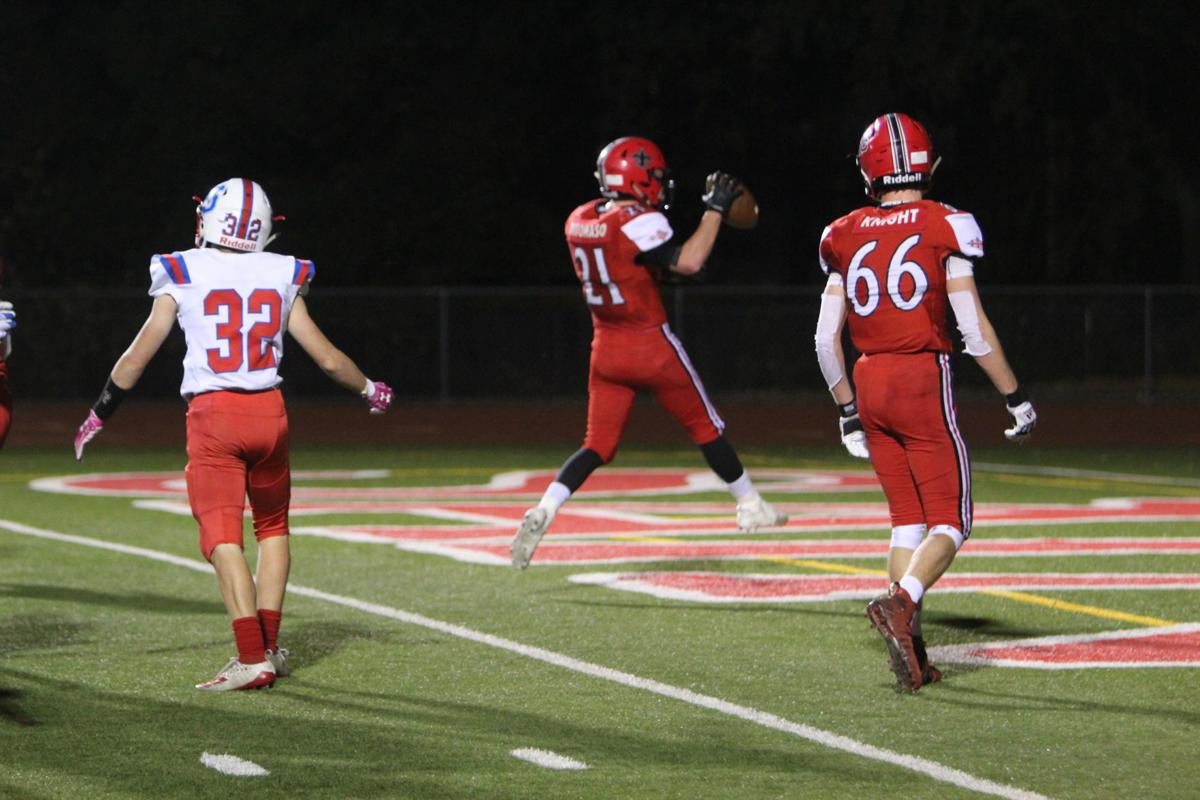 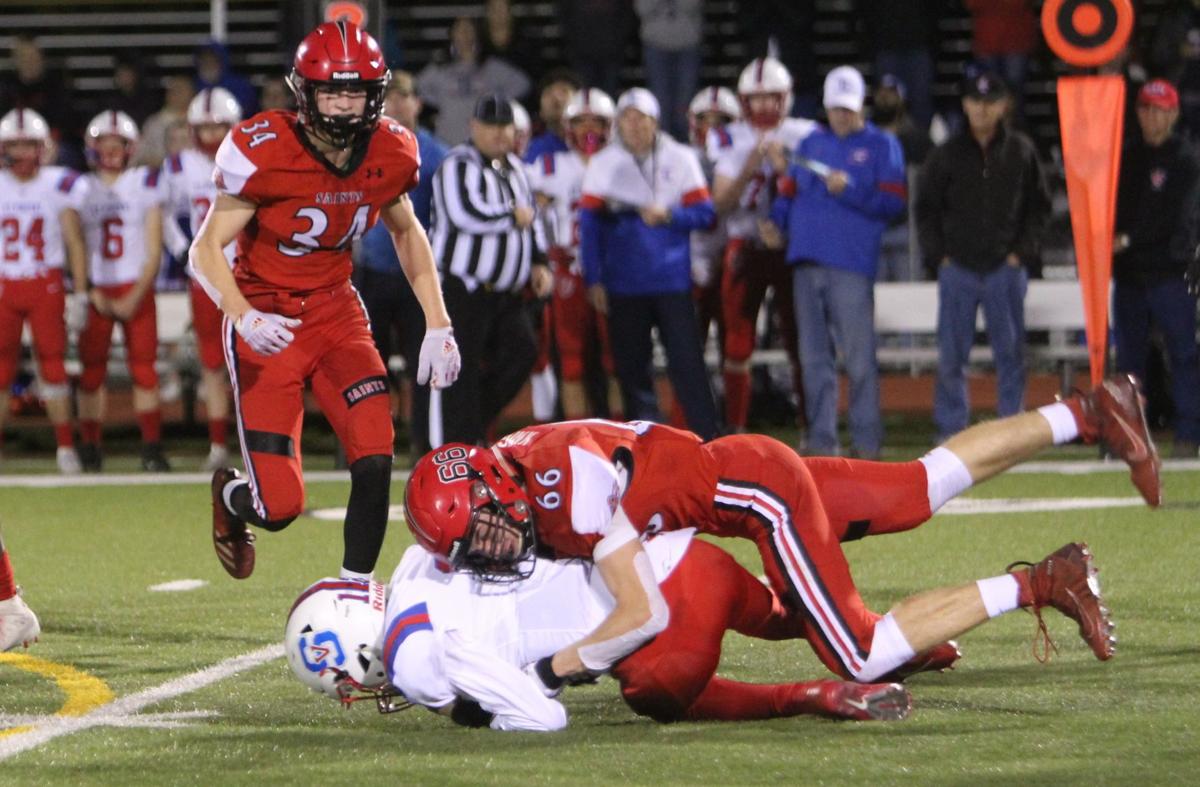 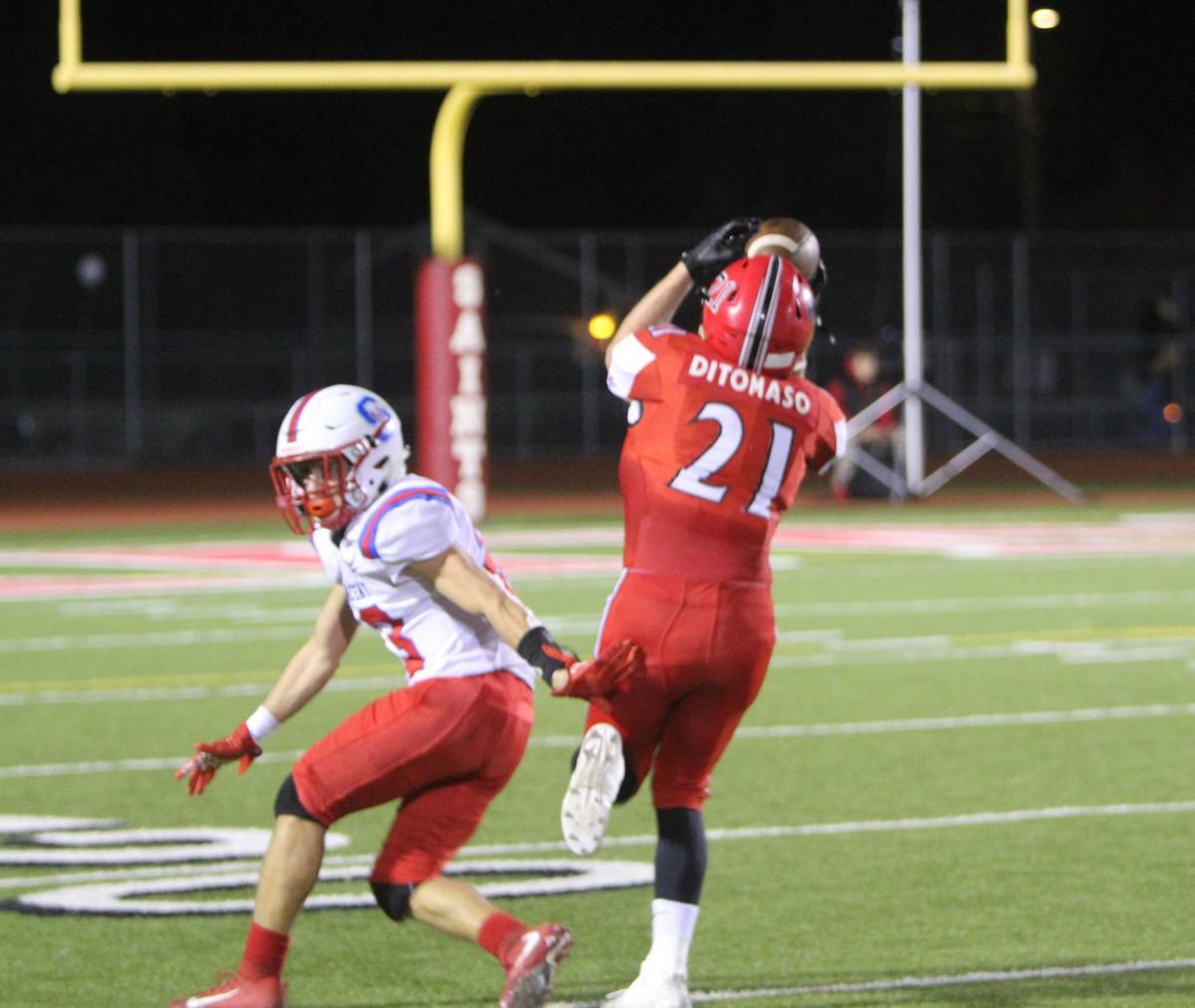 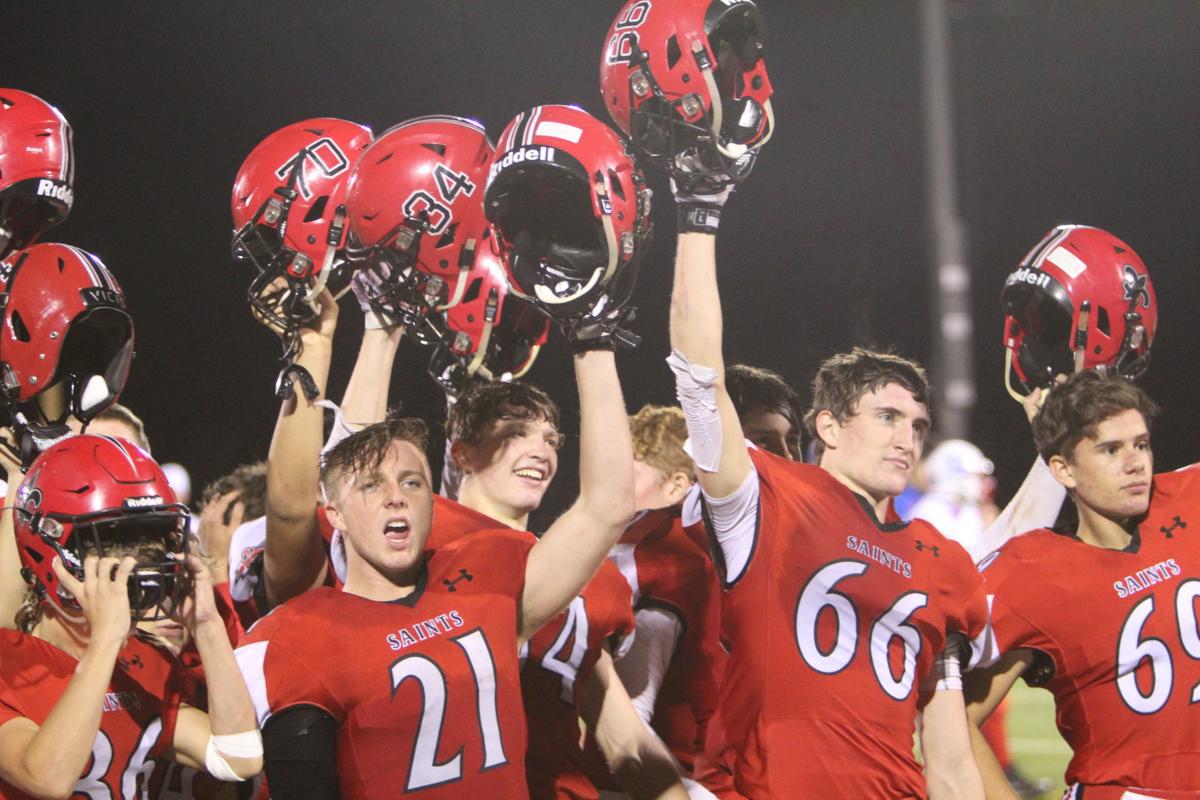 ST. HELENA — The St. Helena High football team considered itself quite lucky to have stayed relatively healthy throughout the regular season. Minus a few tweaked ankles and shoulders, the Saints hadn’t endured any major injuries as they entered the home stretch of their season.

That all changed a few weeks ago when senior team captain Jacob Lehman broke his clavicle against Lower Lake, ending his season. Then, in the weeks leading up St. Helena’s playoff opener, junior quarterback Daniel Martinez suffered an ankle injury, putting his availability for Friday night’s tilt with St. Vincent into question.

In the end, Martinez dressed but did not take the field against the Mustangs, instead occupying the sideline alongside Lehman as their team went to battle without them.

But battle the Saints did, and onto victory they marched.

Filling in for their injured teammates, St. Helena’s reserves stepped up in a big way in its 44-22 win over St. Vincent at Bob Patterson Memorial Field in the first round of the North Coast Section Division 7 playoffs.

Senior Jake Mendes and sophomore JV call-up Spencer Printz shared duties at quarterback, while JV call-ups Harrison Ronayne and Rehn Bothof more than held their own on defense in place of Lehman and Martinez.

The Saints (9-2) turned a one-score game at halftime into a runaway victory thanks to stellar second-half defense and a late touchdown pass from Printz that put the game away late in the fourth quarter.

“We had a lot of young kids out there, a lot of new kids. We started two new defensive backs and I thought they did a terrific job,” said St. Helena head coach Brandon Farrell. “You throw them out there in the playoffs, it’s something else to have them defend,, The speed is different, for sure. But I thought they did a great job all night.”

While St. Helena’s reserves were excellent in their supporting roles, sophomore running back Ivan Robledo once again stole the spotlight. He ran for 323 yards with four touchdowns on 30 carries, and had consecutive touchdown runs of 93 and 67 yards in the third quarter.

It was there when the Saints began to pull away from the Mustangs (9-2), after the visitors had cut a 22-8 second-quarter deficit to 22-15 just before halftime. St. Vincent also had possession to start the second half, so the Saints knew they had to come out with a strong defensive stand.

And who else delivered that but Robledo, picking off a pass from St. Vincent quarterback Jacob Porteus in the Saints’ red zone to stop what was heading toward being a game-tying scoring drive. Instead, Robledo outran everyone on the Saints’ second play of their ensuing drive, going 93 yards for his longest run of the season.

“That got us going,” St. Helena senior running back Cody DiTomaso said about Robledo’s interception.

St. Helena then forced another stop after a lengthy but empty St. Vincent drive, and regained possession with 6:03 left in the third. One play later, Robledo was gone again for his 67-yard score, making it 36-15.

The Mustangs did add a score just before the end of the third, cutting the deficit to 36-22 heading to the fourth, but that would be the last time they would find the endzone on the evening. They opened the fourth with a three-and-out, giving the Saints possession back with 9:48 left in the game. Plenty of time left, right? Wrong. The Saints ate over seven minutes off the clock with an 11-play drive, punctuated by Printz’s 21-yard touchdown pass on fourth down to George Cutting that proved to be the knockout punch.

“The JV had blown out everybody all year long so it wasn’t a scenario where he had ever done that before,” Farrell said of Printz’s management of the offense during the game-deciding drive. “So, I’m really proud of him.”

Aside from his late touchdown pass, Printz also completed a 37-yard bomb to DiTomaso in the second quarter that the senior snagged out the air after it bounced off the helmet of a St. Vincent defender. That play set up an 8-yard touchdown run from Robledo, his first score of the game, which put St. Helena up 16-0 at that point. DiTomaso scored the Saints’ first touchdown with a 9-yard run in the first quarter and finished with 67 rushing yards on 12 carries.

“I thought Cody gave us some wiggle room, caught a nice pass, and that makes a big difference,” Farrell said.

With the win, the Saints advance to the Division 7 semifinals where they’ll face either No. 1 seed Salesian, the team that knocked them out of the playoffs a season ago, or No. 8 seed Stellar Prep. That quarterfinal game takes place Saturday.

“We really want another shot at Salesian just to prove them wrong,” DiTomaso said. “But Stellar Prep would be cool just to have another home game.”

With the semifinals scheduled for next weekend, the Saints are hopeful they’ll have Martinez back at quarterback orchestrating the offense.

“We’ll see what it looks like,” Farrell said. “We’ll hopefully have him back next week, that’s what we’re hoping for.”