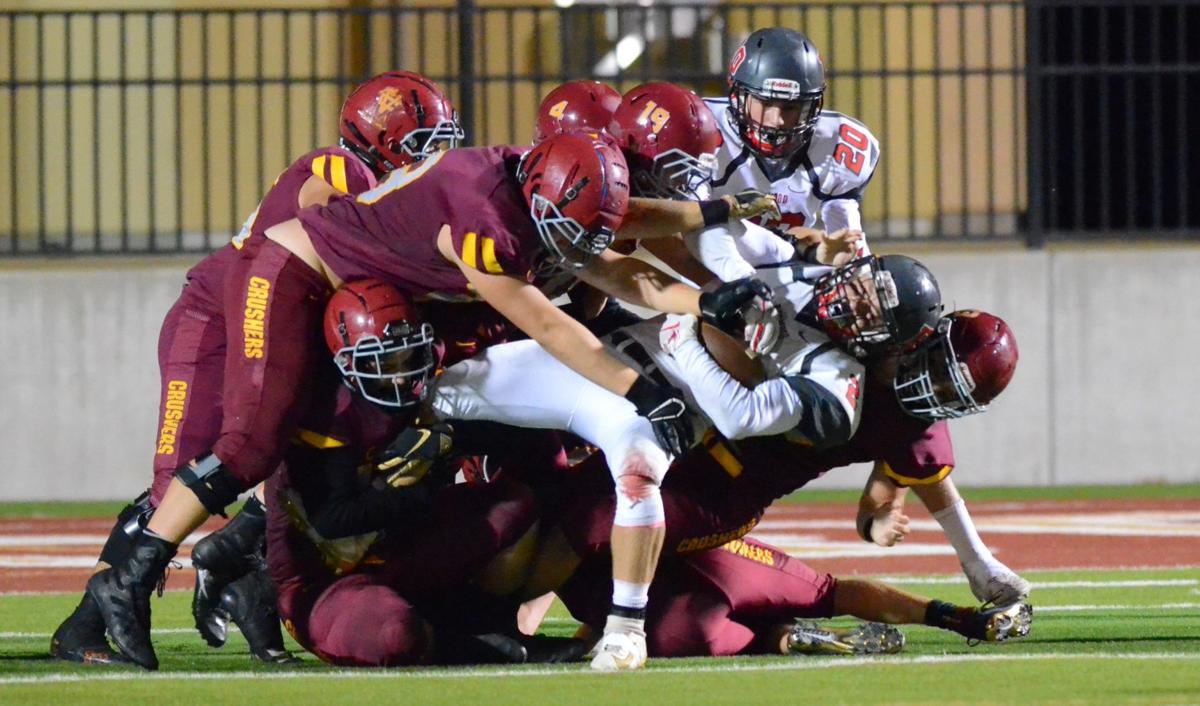 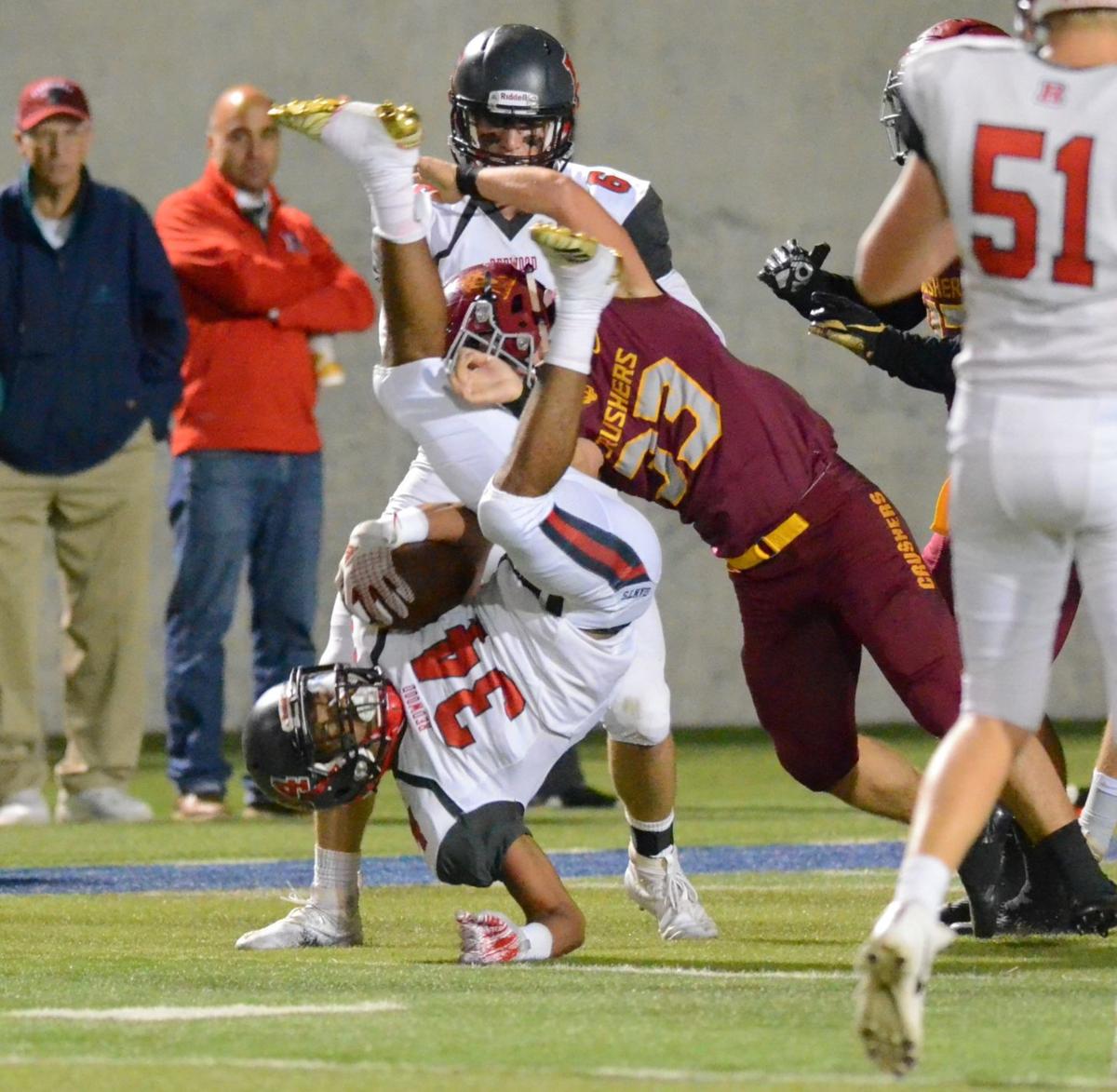 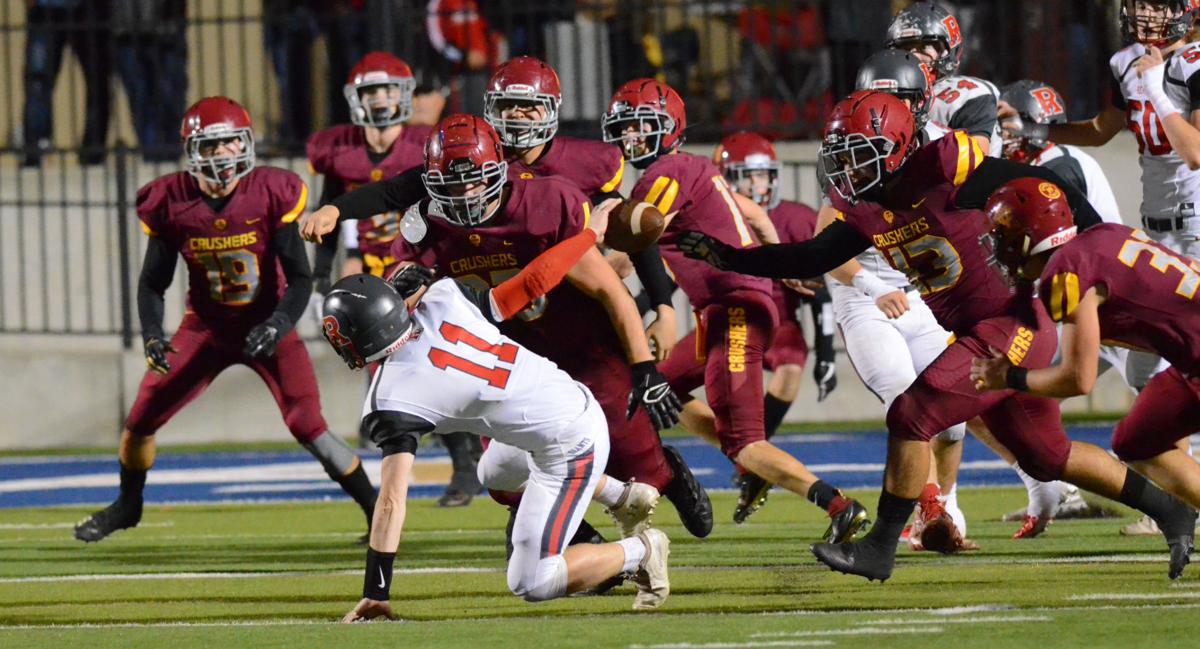 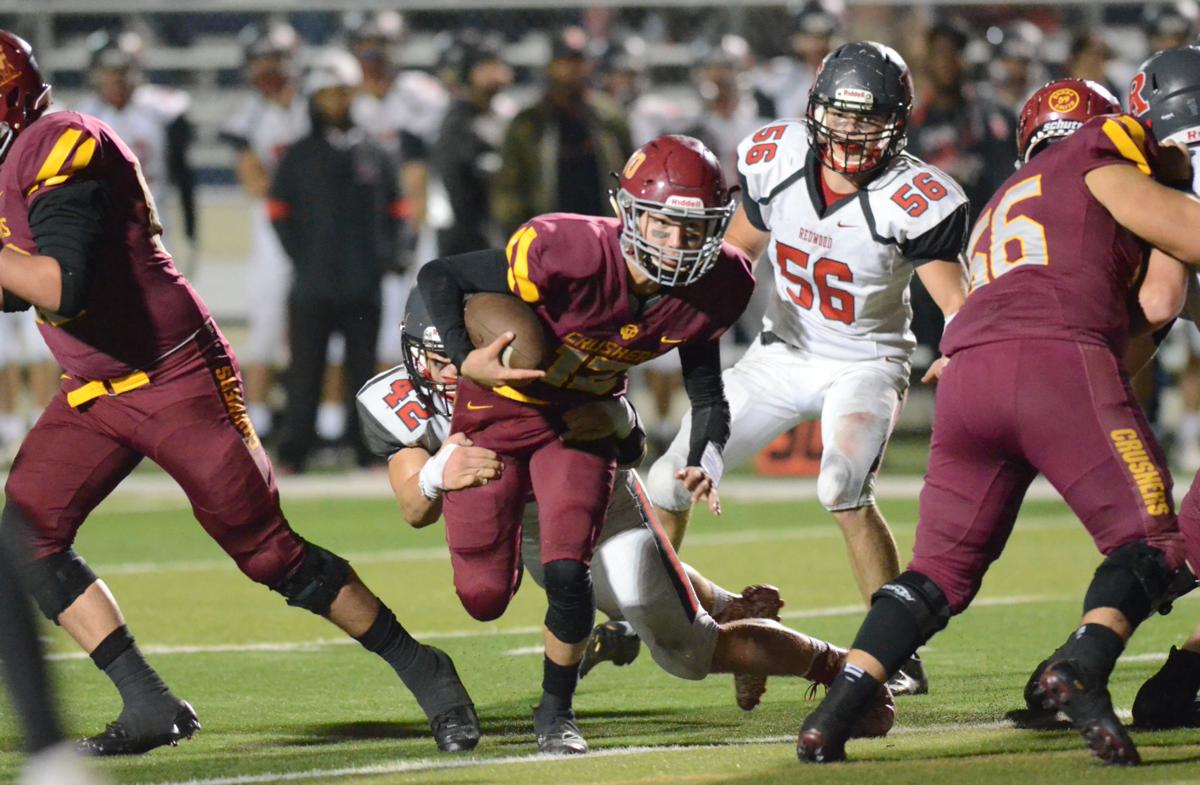 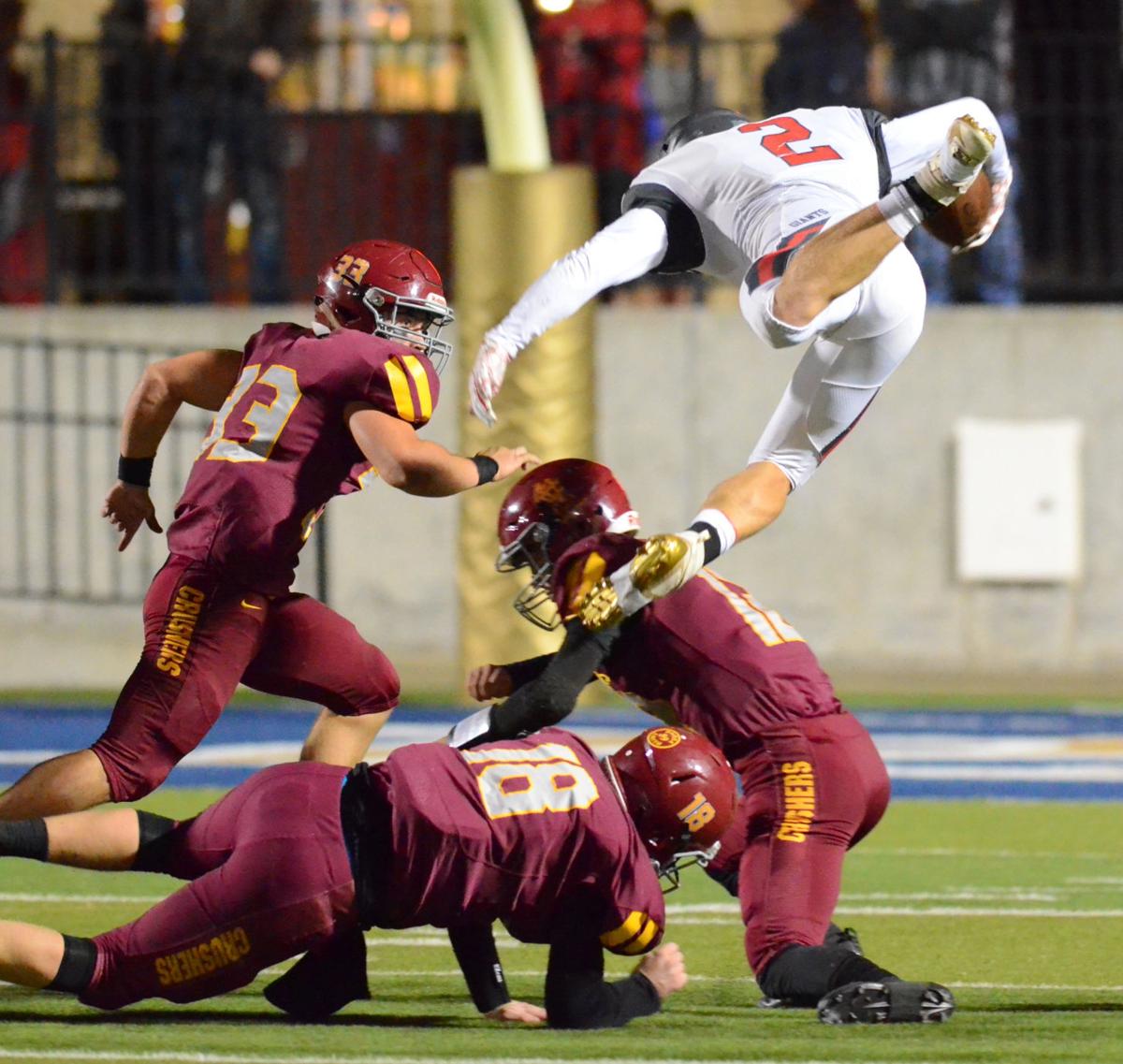 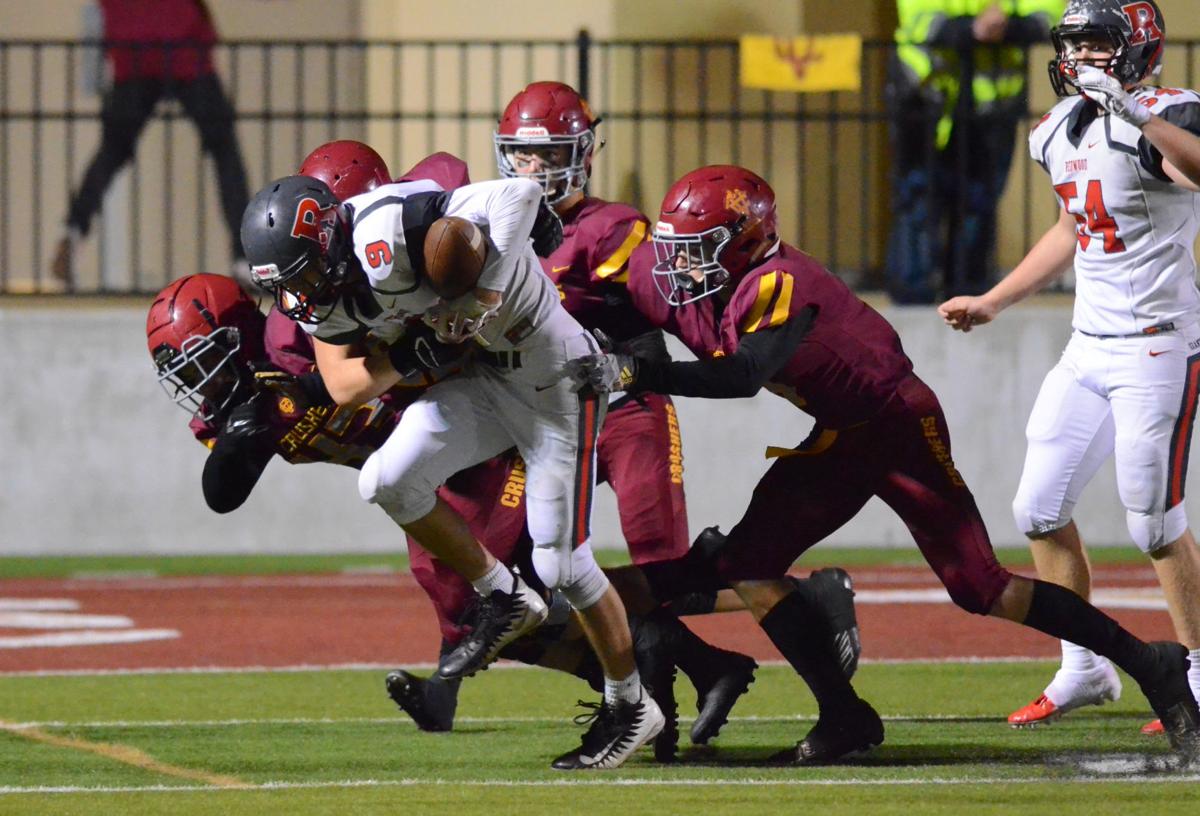 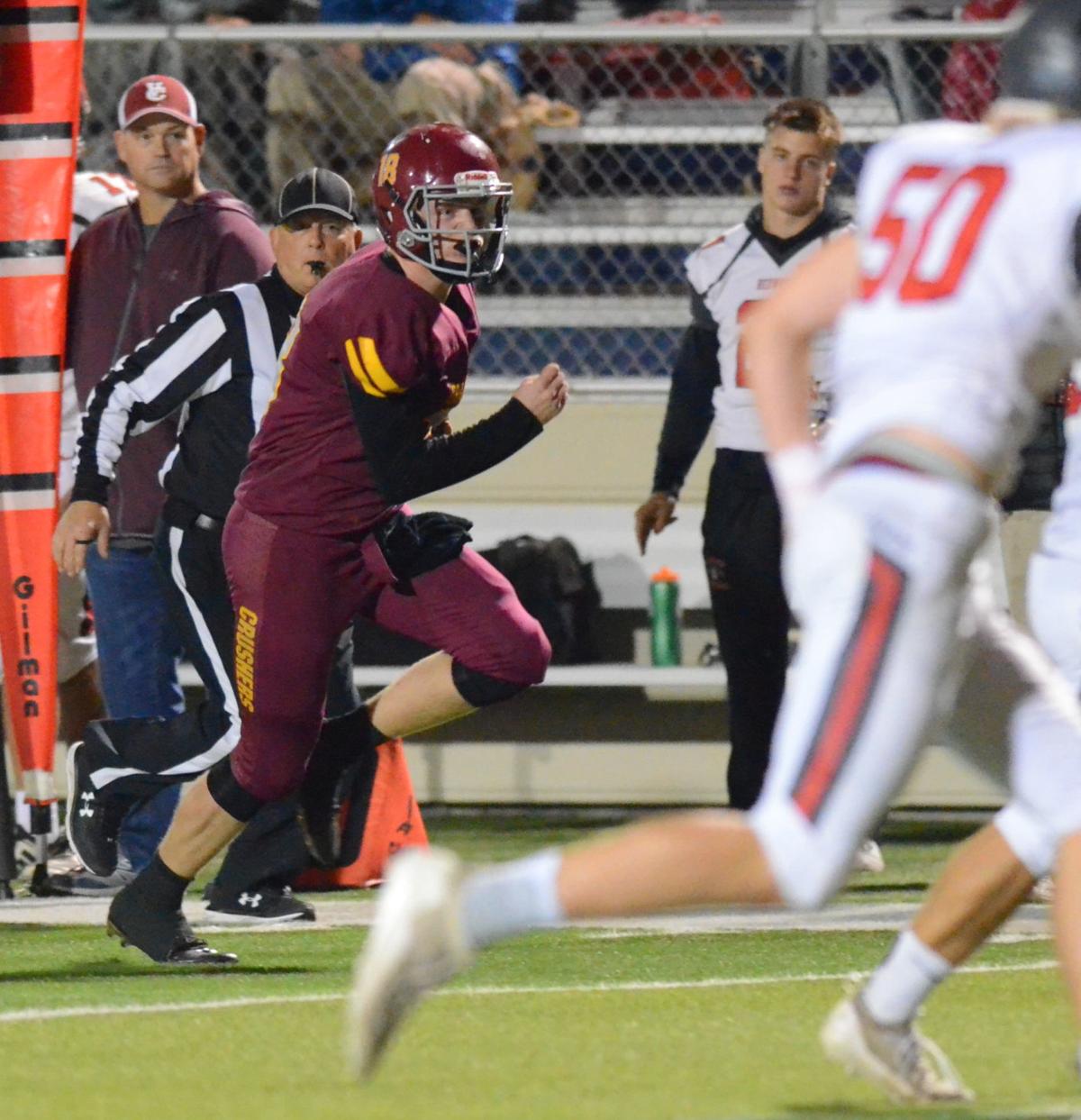 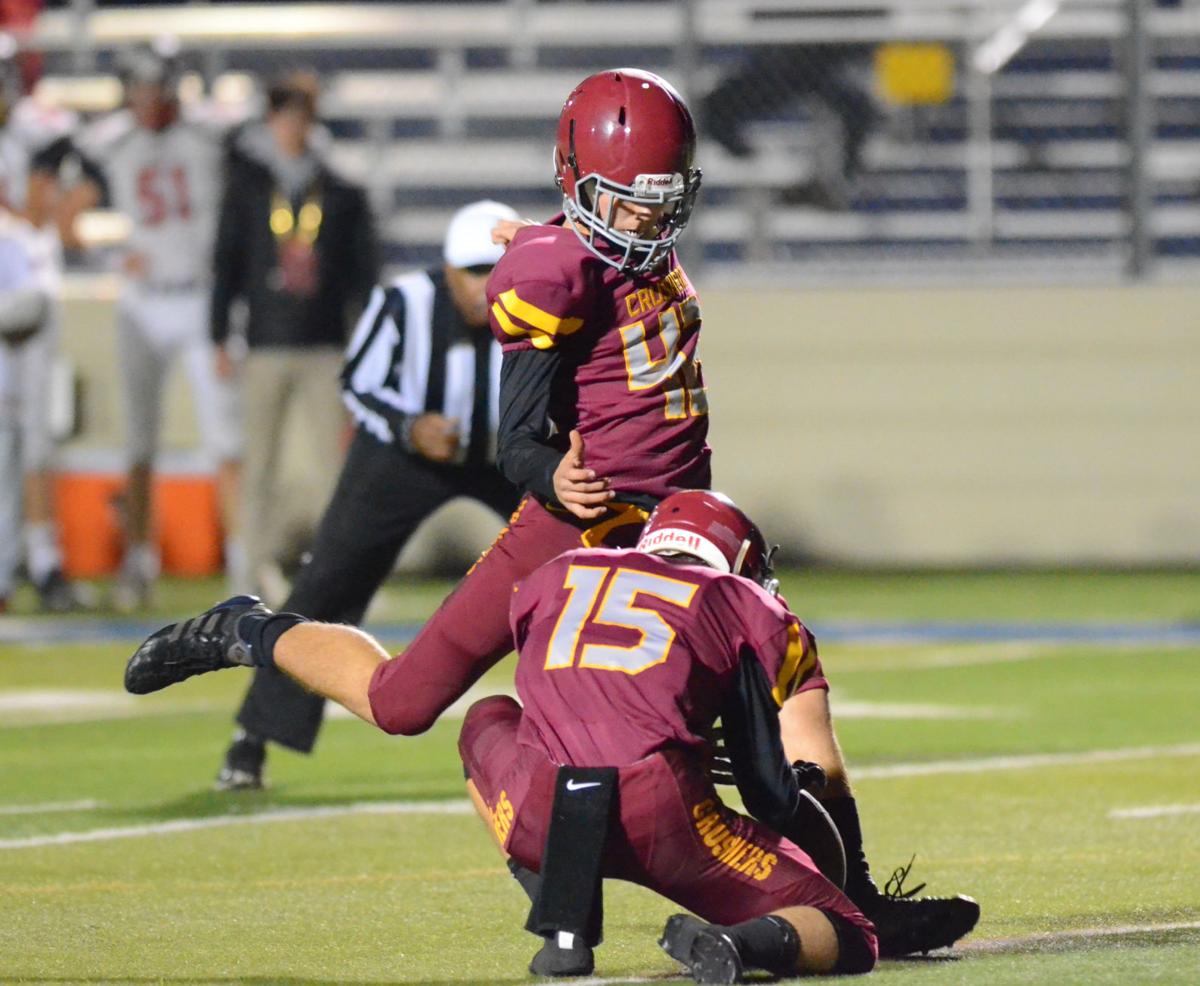 Vintage's Tate Salese kicks an extra point off the hold of Reid McCaffrey on Friday night. 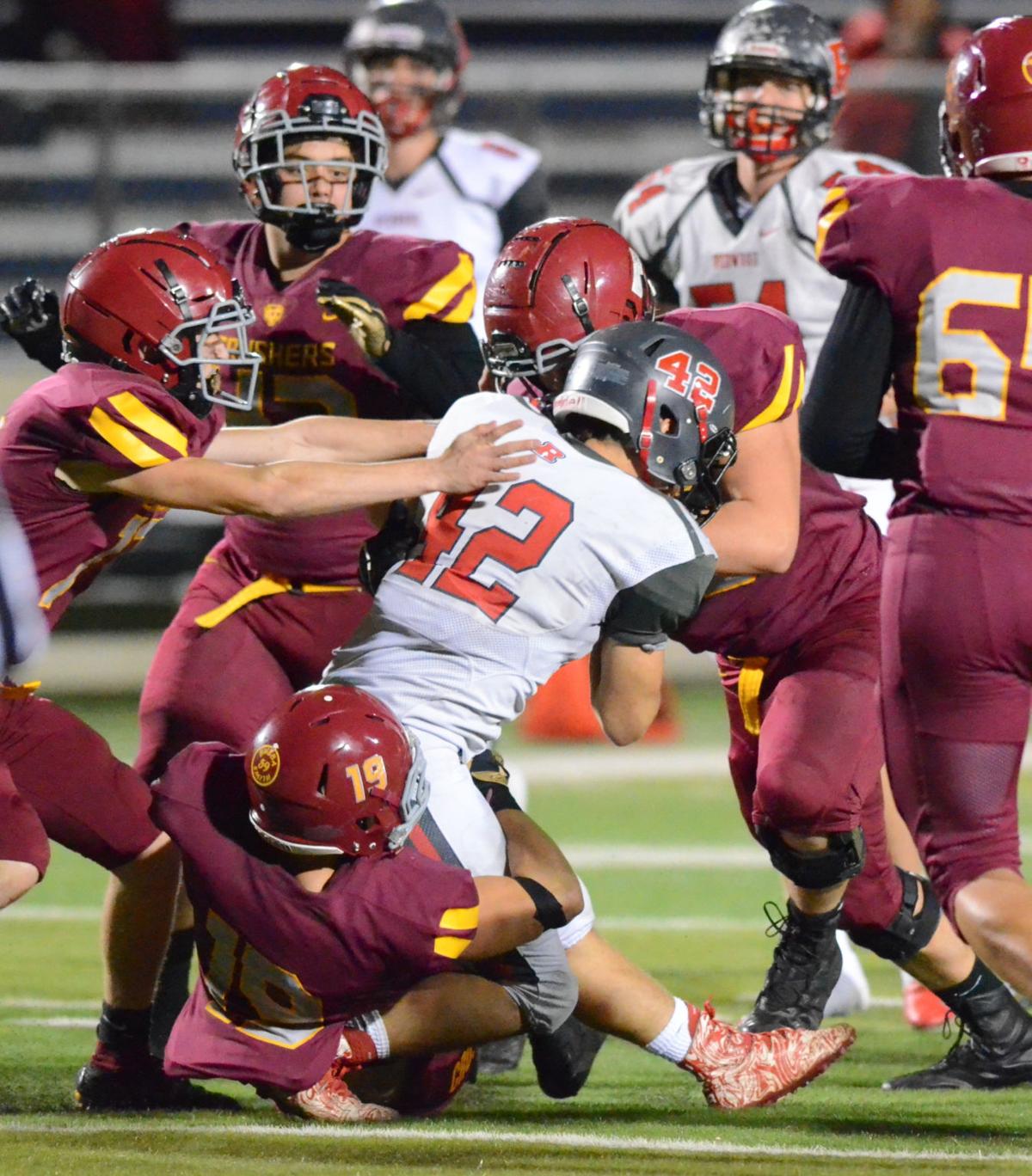 Redwood's Joe Calzaretta (42) is brought down by Vintage's Bryce Eade (19) and others Friday night. 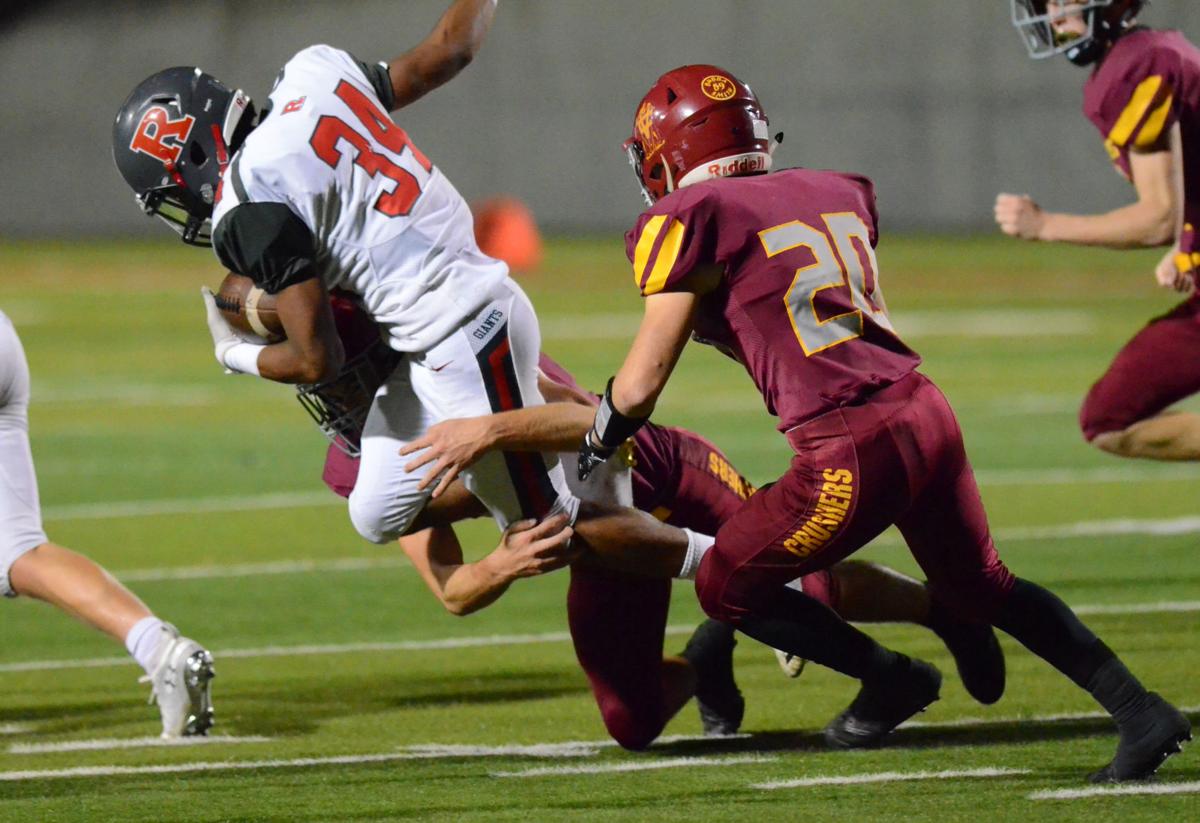 Redwood running back Rudy Washington (34) is wrapped by a Vintage defender Friday night. 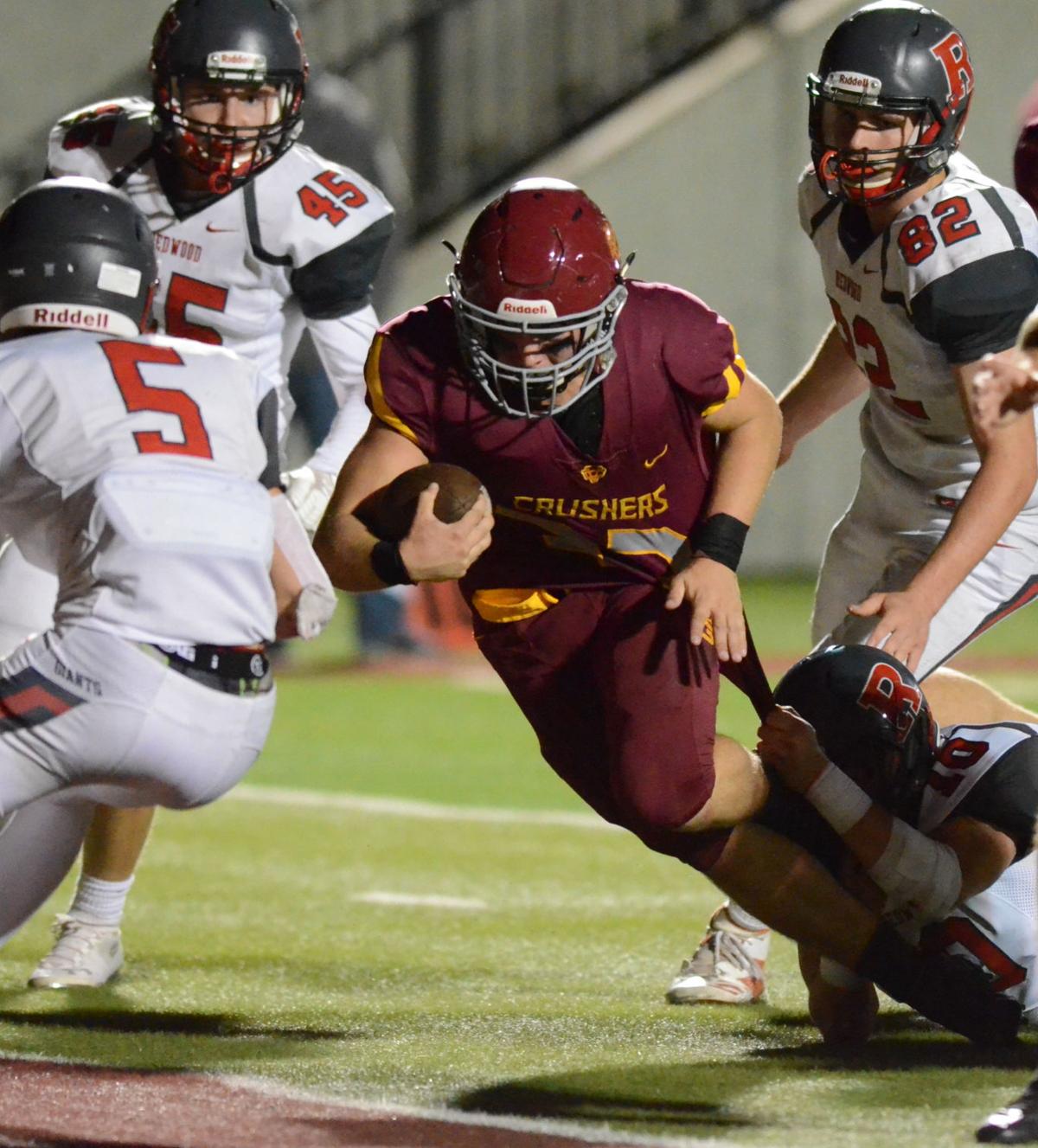 Vintage running back Dylan Smith picks up yards against Redwood on Friday night. 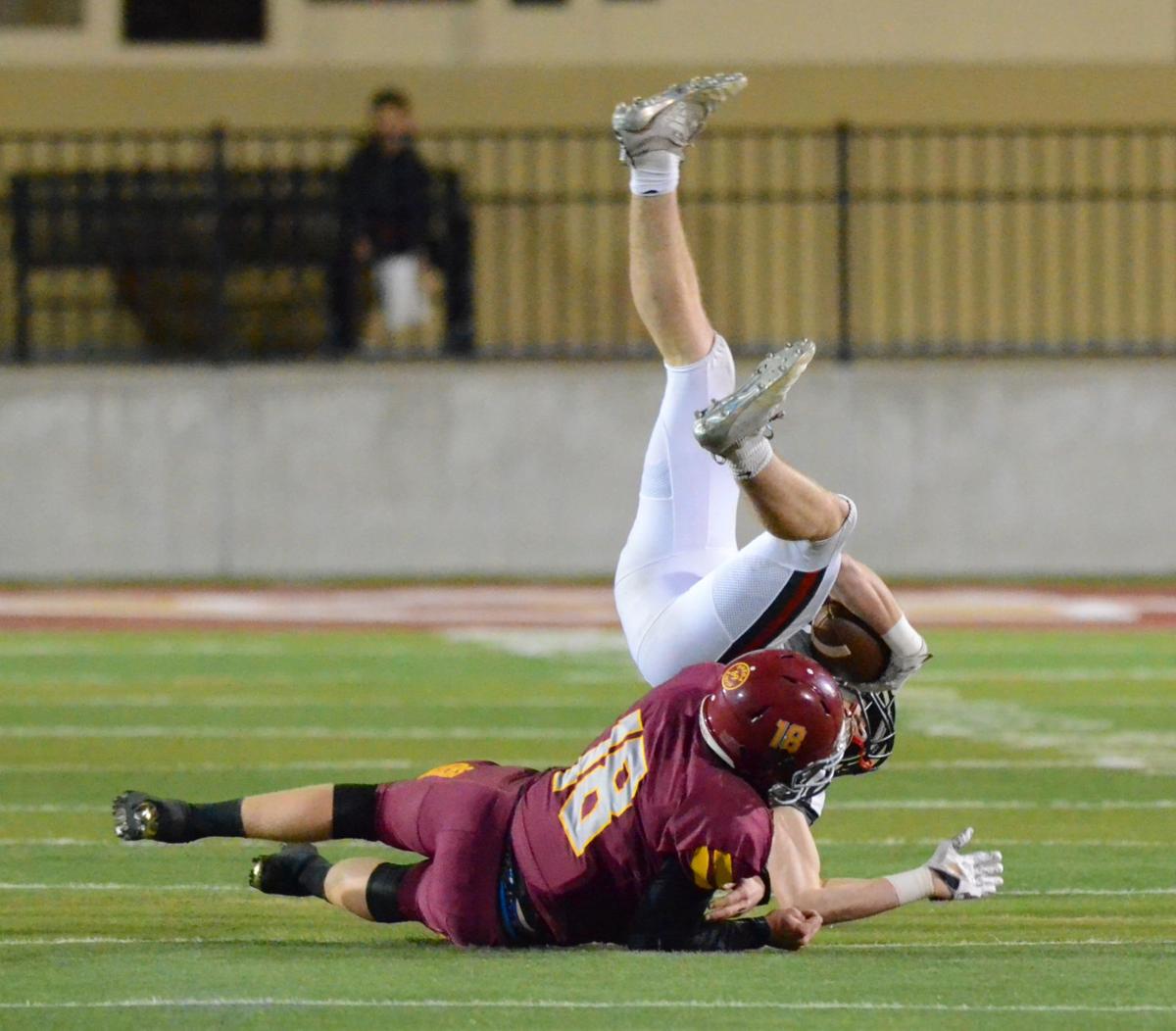 Vintage's Tate Salese kicks an extra point off the hold of Reid McCaffrey on Friday night.

Redwood's Joe Calzaretta (42) is brought down by Vintage's Bryce Eade (19) and others Friday night.

Redwood running back Rudy Washington (34) is wrapped by a Vintage defender Friday night.

Vintage running back Dylan Smith picks up yards against Redwood on Friday night.

Shutouts are always hard to come by, and even more so in the playoffs.

But in Friday night’s North Coast Section Division 2 quarterfinal, No. 2 seed Vintage accomplished both in blanking visiting No. 7 seed Redwood, 25-0, at Memorial Stadium.

It was something Vintage head coach Dylan Leach was very pleased about after his team improved to 10-1.

“Those guys are tough. They play a tough brand of football,” he said of the Giants (8-3). “A lot of people think they’re like a finesse pass-type team, but they came out and they executed their outside zone great. Anytime you get a shutout, especially in the playoffs, it’s a great thing, especially to a team that put up (75 points against Drake) the last time they came out.

“But hats off to them. They never gave up. They play hard-nosed, and I give those guys on that coaching staff a lot of credit.”

It wasn’t all that easy for the Vintage defense. Redwood moved the ball into the Crushers’ red zone twice, but the hosts held both times.

“We know we’re really strong on defense,” said Vintage sophomore running back Dylan Smith. “We know that we’re a defensive team for sure. It gives us hope against these next few teams to stop them on defense.”

Smith had his coming-out party Friday night, scoring two touchdowns and rushing for 63 yards on four carries. The other key to the Vintage rushing onslaught was senior Pedja Zivkovic, who rushed for 122 yards on 13 carries.

“Pedja is the one that moved us in between the 20s and got us the movement,” Leach said. “And then Dylan obviously had those nice touchdown runs. He’s a sophomore, so we’re really excited about that. But he just runs hard and he plays with such passion and I appreciate him every day. He comes and learns and he has an open mind and he’s good at football. But he wants to be great, and so that’s what we appreciate about Dylan Smith.”

Smith’s first score came with 2:59 remaining in the second quarter, when he punched in a 12-yard touchdown run and quarterback Jacob Aaron ran in the two-point conversion to put the Crushers up 11-0 at the break.

Vintage had taken a 3-0 lead on a 27-yard field goal from Tate Salese on its first drive, which had looked more started promising at the start.

“I just thought at the beginning game we were way too emotional, like we were so pumped up to play a game,” Leach said. “We felt like we left a lot out there the last time we got on this field, and I think these kids just wanted it so much that we were just a little bit too emotional. So, I really enjoyed the way they came out in the second half and really played our type of football.”

After a scoreless third quarter, Smith ran in his second score from 32 yards out on a scamper up the Crushers’ sideline with 11:15 left in the game.

Vintage put the game away shortly after, when Aaron punched in a 5-yard touchdown run to make it 25-0 with 8:01 remaining.

With the win, the Crushers move onto the NCS semifinals for the second consecutive season. They’ll be back in action next Saturday at 7 p.m. when they host No. 3 seed Campolindo. The Cougars (9-2) hammered No. 6 seed Livermore on Friday night, 41-16.

The last time Campolindo played at Napa Memorial Stadium was in 2015, when the Cougars came to town riding a 29-game win streak.

This will also be the first semifinal playoff game hosted at Memorial Stadium since 1989.