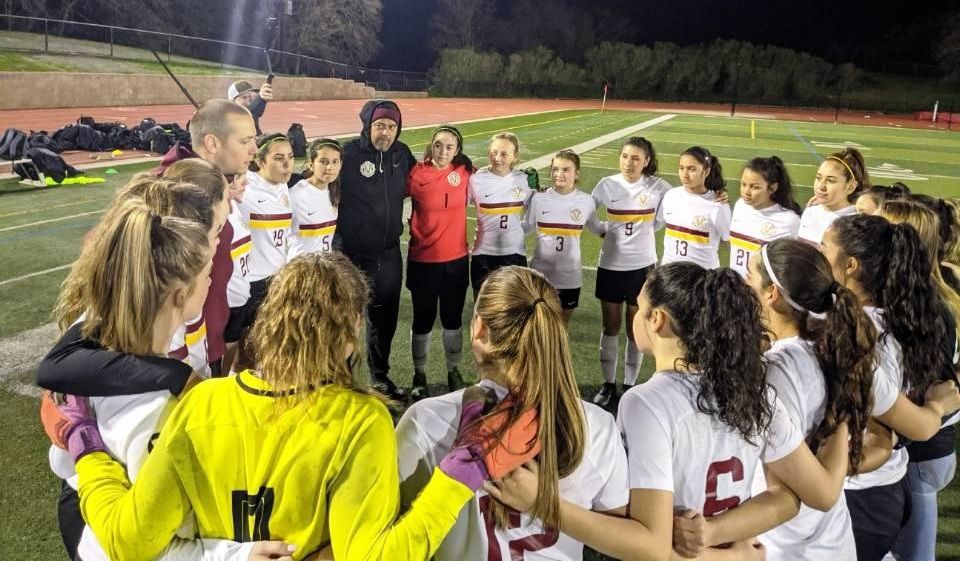 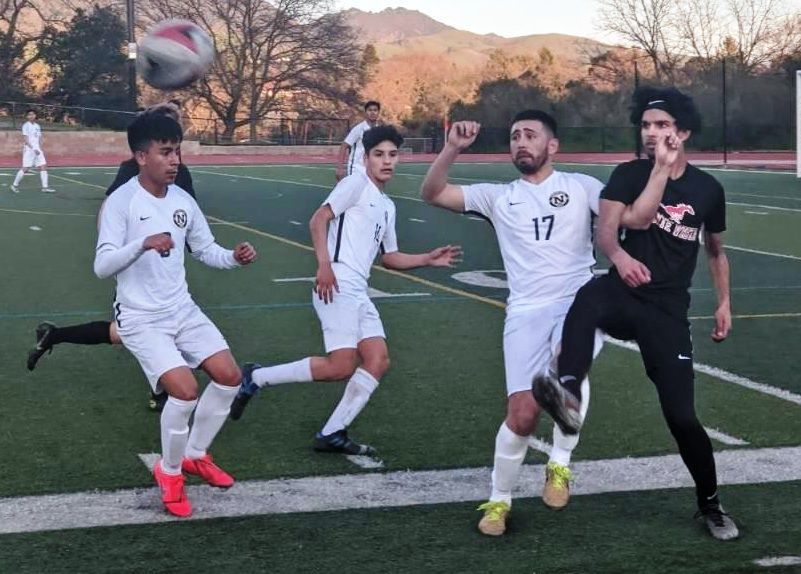 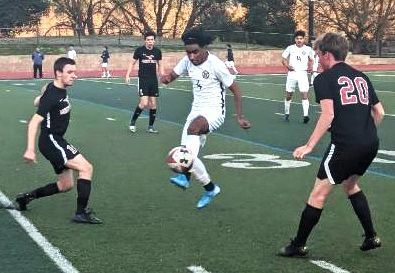 Napa High's Dayron Solis, controls the ball between a pair of Monte Vista defenders in Danville on Wednesday night.

DANVILLE — Nestled in the rolling foothills of Mount Diablo sits one of the top high school soccer programs in all of Northern California.

On paper, the most even matchup of the night was the opener, between the ninth-seeded Napa boys (13-8-1) – the Vine Valley Athletic League runner-up – and the No. 8 Mustangs (12-4-5), who were third in the East Bay Athletic League.

The young Grizzlies controlled the first five minutes of the game and were creating opportunities from the midfield.

But Monte Vista bounced back with a few quick corner kick opportunities, and the third one found its mark in the eighth minute. Christopher Magagnini lined up for a corner kick, but the midfielder casually curved the ball toward the goal and Napa goalkeeper Erick Castro couldn’t recover in time to stop it.

“I think that first goal where our goalie said ‘I got it’ and then everyone froze and the ball went in, that hurt us,” said Napa head coach Rafael Ayala. “But take nothing away from them. They played really well and put it away.

“They have that historic culture here and everything soccer they do well. They are a great program, that’s why they have the three stars on their jackets. I hope next season we can come back to NCS and play them in the preseason and just keep getting better. We have a super young team and we are only departing three seniors.”

After its first goal, Monte Vista increased the pressure and the Grizzlies’ once-strong midfield failed to find consistent success. The Mustangs controlled the time of possession for most of the first half. Known for their strong counter attacks, they pressured from all directions as the Grizzlies struggled to push the ball out of their half of the field.

Napa stopped further Monte Vista attacks until the 33rd minute, when the hosts played to their strengths for the second goal. After a quick turnover deep in Mustangs territory, the ball was rapidly pushed forward to a galloping Tyler Beach. The tall forward played the opportunity counter perfectly. Outrunning the Napa defenders, Beach ran down the right side of the field and slotted a crisp pass to Colin Miller on the left side of the box. The left winger placed the shot into the goal to make it 2-0.

Before Napa could even compartmentalize the goal, the Mustangs found the net again. Ethan Lopez took the ball by himself past the Napa defense from midfield and buried the ball in the back of the net from the right side for a 3-0 halftime lead.

Napa managed only one shot on goal in the first half.

This wasn’t the last the Grizzlies would hear from Lopez. The midfielder found substitute Aneel Singh in the 66th minute to put Monte Vista up 4-0.

Napa never stopped fighting after that, as Ian Clark pushed a shot past backup goalkeeper Camden Johnson for the Grizzlies’ lone goal of the game.

“I think the seniors taught us a lot about how to stay composed and keep fighting,” Napa junior Salvador Leon said. “If we would have given up in the second half, they would have scored a lot more.”

It was a different story for the Vintage girls. Maxpreps.com has the Monte Vista girls ranked 43rd in the nation and eighth in the state overall. The defending NorCal-champion Mustangs (15-2-2) proved early and often what levels the high school game can achieve in their rout.

Vintage (8-10-4) held tough for the first 14 minutes of the contest, but the power of the juggernaut quickly overwhelmed them. The Mustangs sport one of Northern California’s top players in UCLA commit Megan Edelman, a midfielder whose talent belies her small stature.

“We knew coming in that they were nationally ranked and that No. 3 (Edelman) was an amazing player, so we knew we had our work cut out for us,” Vintage head coach Miguel Ayala said. “But it was a good experience for the girls that are returning next year. It’s definitely something we will learn from and take with us and move forward.”

The Crushers attempted to mark Edelman from the beginning of the game, with the goal of stopping the senior from touching the ball as much as possible. The strategy worked for a short while, but Edelman eventually worked her magic. After dribbling around a couple of defenders, she connected with rising star Charlyse Berry and the sophomore found the back of the net.

Kylie Musante added the first of her two goals in the 20th minute with a strong strike. Berry had one of the top goals of the evening just 13 minutes later, as the forward found a small gap in the Vintage defense. Just inside the box Berry made a fast turn and blasted a hard hit shot into the top right corner.

Monte Vista pelted Vintage goalkeeper Carla Magana all evening but the junior performed well, even while facing some 26 shots on frame. The net minder made 16 saves.

Three minutes after Berry’s second goal, Musante picked up an opportunity goal. On Avarie Phillips’ cross from the left side through the box, after many players missed chances to clear the ball or score, Musante rushed in late and placed a ball into the left corner to make it 4-0 at halftime.

Monte Vista had 20 shots in the first half compared to only one from Vintage, a shot that came close but sailed over the top crossbar.

Edelman opened the second-half scoring with her first goal of the game, as a deflection near the goal was bounced back to her at the top of the box. The senior smashed the ball in mid-air and rifled it past Magana .

Morgan Brillheart joined the two-goal club for the Mustangs in less than five minutes, with the sophomore scoring on back-to-back runs. Brillheart’s second goal was a stunning chip shot from deep in the right corner that had even some of the Vintage crowd verbally impressed.

Tatiana Berestka finished off the evening with a chip shot over the Crushers’ backup goalkeeper after a goal kick.

Miguel Ayala was pleased with the season, which started with four wins in five games.

“We started off on a high note,” the coach said. “We were playing some good teams and winning. I knew this team was going to be technically sound, and it feels like we just ran out of gas. We’re going to take this game and learn from it and hopefully move forward. We’ll be back next year.

“Our league is at one level, but once you get to these playoffs it’s a whole different level,” Ayala said. “They have to realize that and I hope that they realize that they have to start working right after the season’s over for next year. It starts now.”

The Crushers made the playoffs with eight overall wins and a fourth-place VVAL finish, after missing out with six wins and a fifth-place league finish last winter.

“Overall I think we did pretty well and I’m pretty sure we’re the first team to make the playoffs in six years, so that’s exciting,” Vintage senior Chase DeBow said. “Unfortunately we weren’t able to make it very far, but during the season we got the amount of wins we were hoping for. Last year we had a lot of ties and we turned some of those over into wins this year, so it was good.

“I’m excited to see the program exceed without me.”

Napa High's Dayron Solis, controls the ball between a pair of Monte Vista defenders in Danville on Wednesday night.