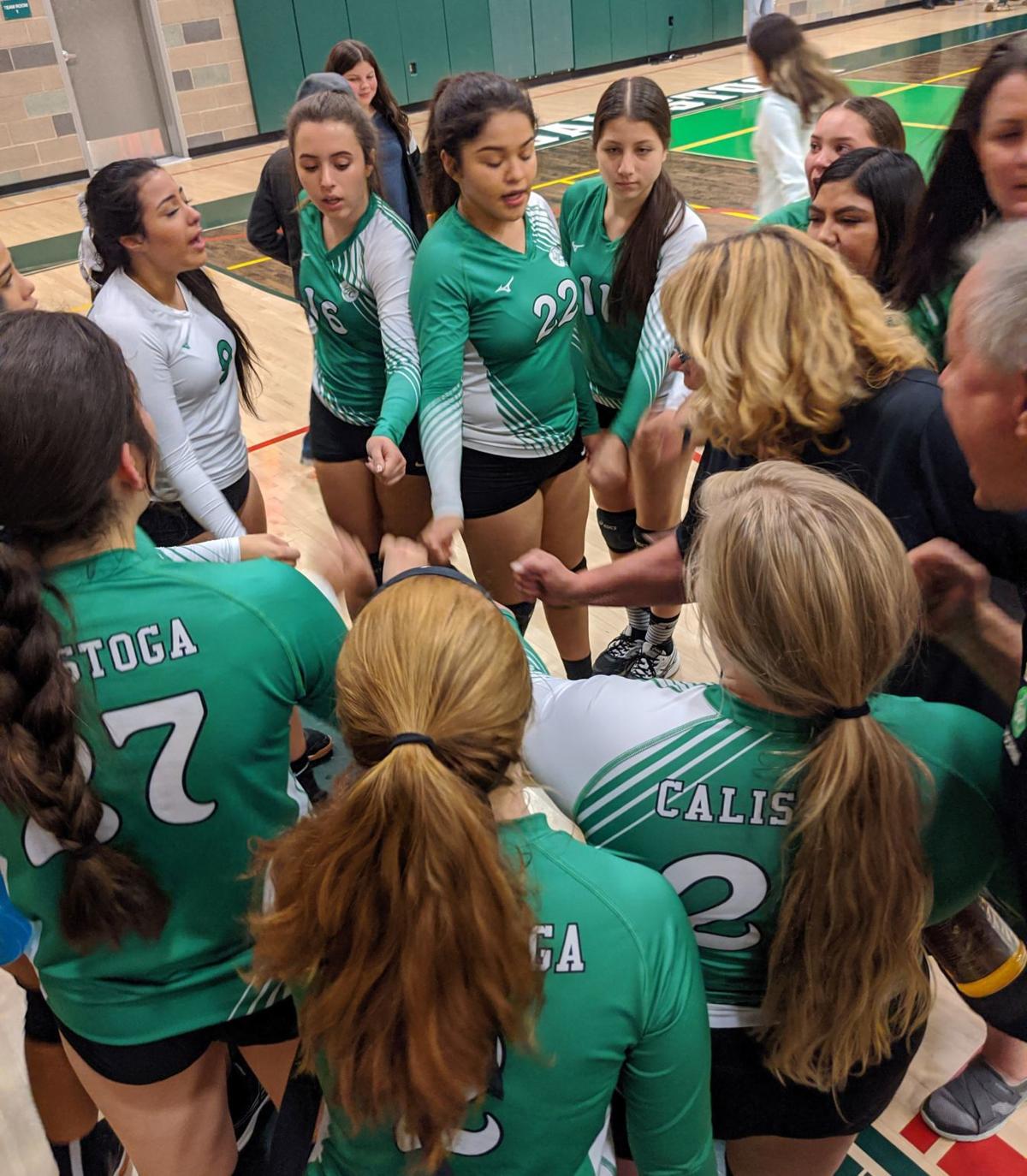 Calistoga head coach T'Anne Butcher talks to her players during a timeout during the Wildcats loss to San Francisco Waldorf in the semifinals of the North Coast Section Division 6 playoffs last week. 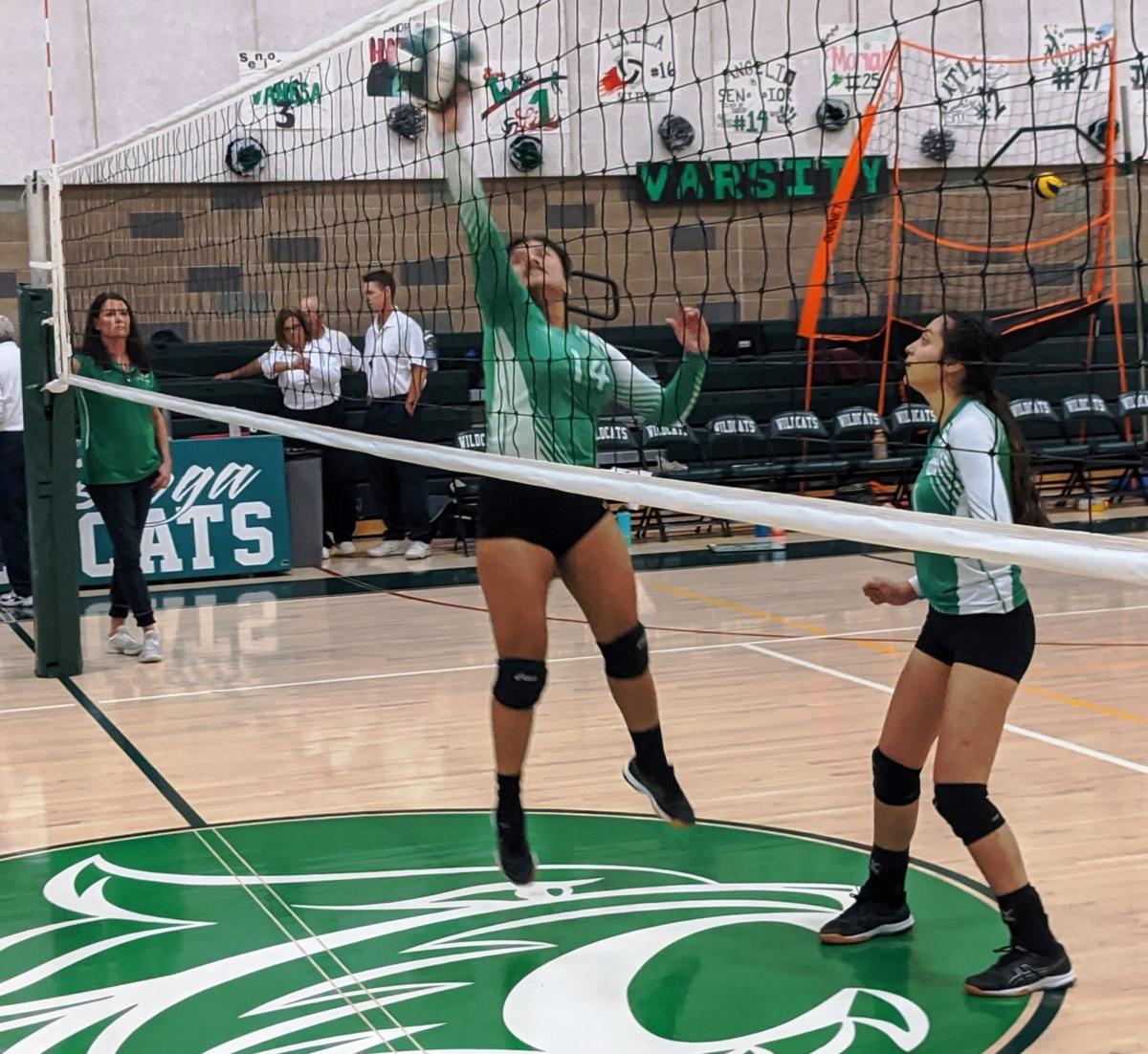 Calistoga senior captain Angeli Aquino pops the ball over the net while warming up for Wednesday night's home match against San Francisco Waldorf.

CALISTOGA — The Calistoga Wildcats appeared well on their way to a second straight North Coast Section Division 6 volleyball title game appearance after jumping out to a 18-13 lead in Set 1 against visiting San Francisco Waldorf on Wednesday night.

The seventh-seeded Wolverines went on an 11-2 run and were a point away from taking the first set. Third-seeded Calistoga, in front of its boisterous home crowd, stormed back with four straight points to force the game to be decided by a two-point margin. The teams left everything on the floor for the next five minutes, trading points back and forth.

Unfortunately for the Wildcats, a kill gave San Francisco Waldorf the hard-fought set and Calistoga wasn’t able to recover as the Wolverines cruised to a 29-27, 25-10, 25-19 sweep in the semifinal.

“Losing a set at this level is just hard, no matter how you look at it,” Calistoga head coach T’Anne Butcher said. “It’s hard when you are so pumped up after that first game and then you have a huge hiccup in the second set. It is hard to come back from what just happened and then, by the time you have figured it back out, it’s too late.”

The quest for a repeat of last year’s section title – the first by a Calistoga High girls team in any sport – is officially over for the Wildcats, but the season is not. Calistoga made it to the semifinals with a 3-0 victory over Anderson Valley of Boonville on Monday after a first-round bye. By making it to the semifinals, the Wildcats have qualified for the NorCal playoffs for the second straight season.

“We knew this was going to be a really hard game and we also knew this wasn’t going to be the end of our season,” Butcher said. “This loss was pretty crushing because we definitely wanted to go all the way again, especially having a senior team, but it is what it is. There are very few second chances. So hopefully, their spirits will come back up and they will start preparing for this opportunity to go further than they did last year.”

San Francisco Waldorf opened the second set on an 8-0 run against a Calistoga team that appeared to be shell-shocked from losing the marathon first set. The Wildcats regrouped later in the set, but the Wolverines were too much.

“I am really proud in how they played and fought,” Butcher said. “The second game definitely had some issues, but it just shows what they are capable of. They just need to get past their nerves.”

The third set was closer, as the sides battled for position throughout, but the Wolverines seemed to have already taken the energy out of the home crowd and started to extend their lead. They led by 4 to 5 points for most of the set.

The Wildcats trailed 23-14 when they got a second wind and strung together five straight points. But San Francisco Waldorf recovered to finish off the sweep.

The Wildcats will likely be on the road for NorCal playoffs again and, after finding out Sunday who they open against and where, will take the floor again next Wednesday.

“We are glad that we qualified for Northern California playoffs,” Butcher said. “So we have a week to practice and get stronger and work on what we need to work on.”

Prep fall soccer in the Napa Valley ended Wednesday when the Calistoga High boys fell to Athenian in the section semis.

Calistoga head coach T'Anne Butcher talks to her players during a timeout during the Wildcats loss to San Francisco Waldorf in the semifinals of the North Coast Section Division 6 playoffs last week.

Calistoga senior captain Angeli Aquino pops the ball over the net while warming up for Wednesday night's home match against San Francisco Waldorf.