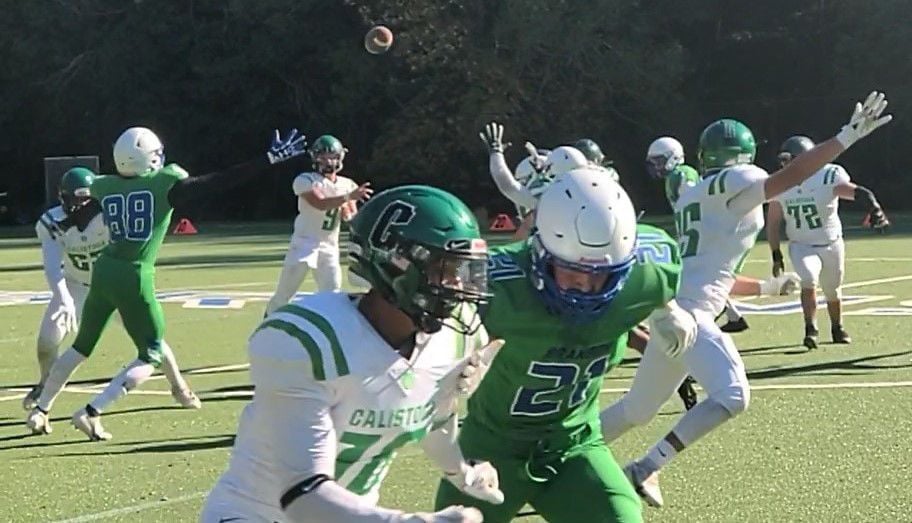 Calistoga quarterback Edgar Caldera targets Marvin Marin (25) with a pass against Branson on Saturday in Ross. 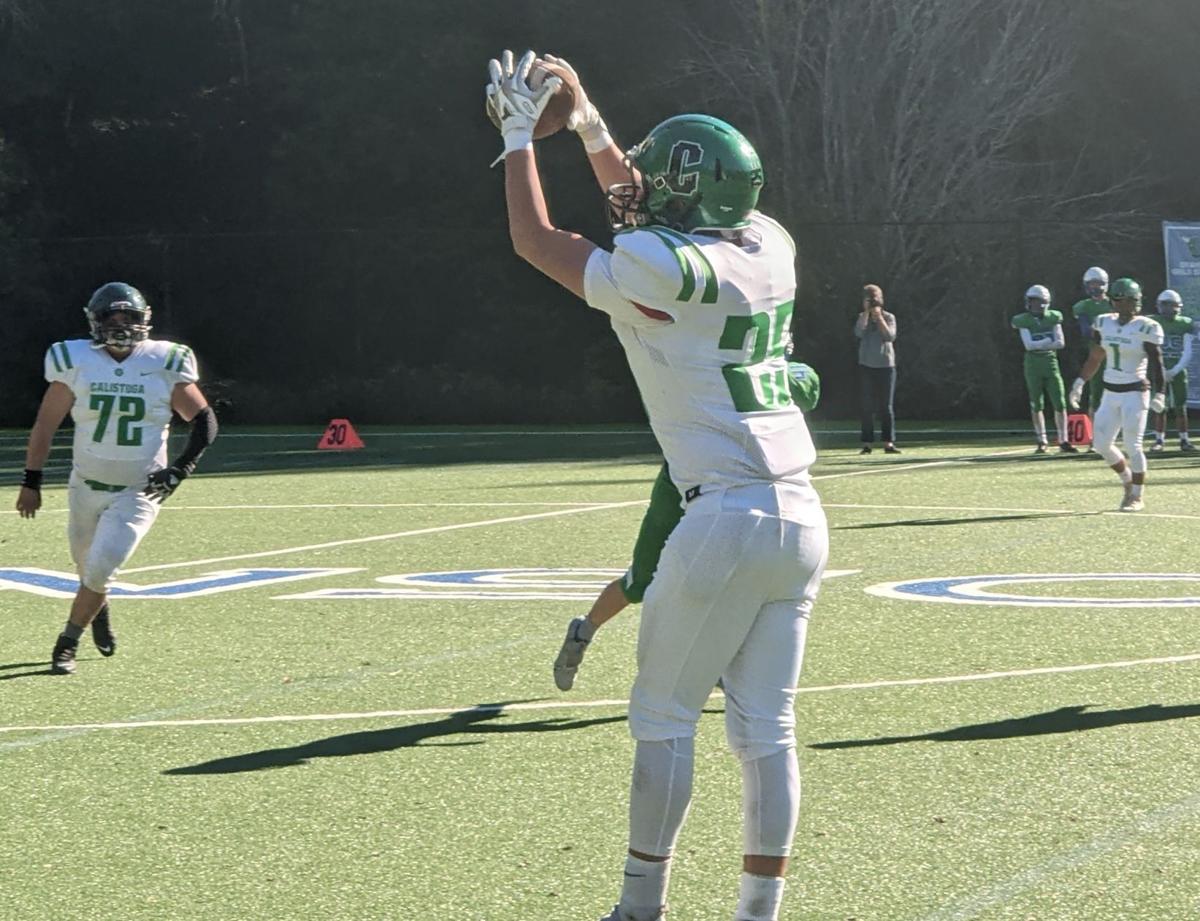 Calistoga's Marvin Marin makes one of his four catches for 58 yards against Branson on Saturday in Ross. 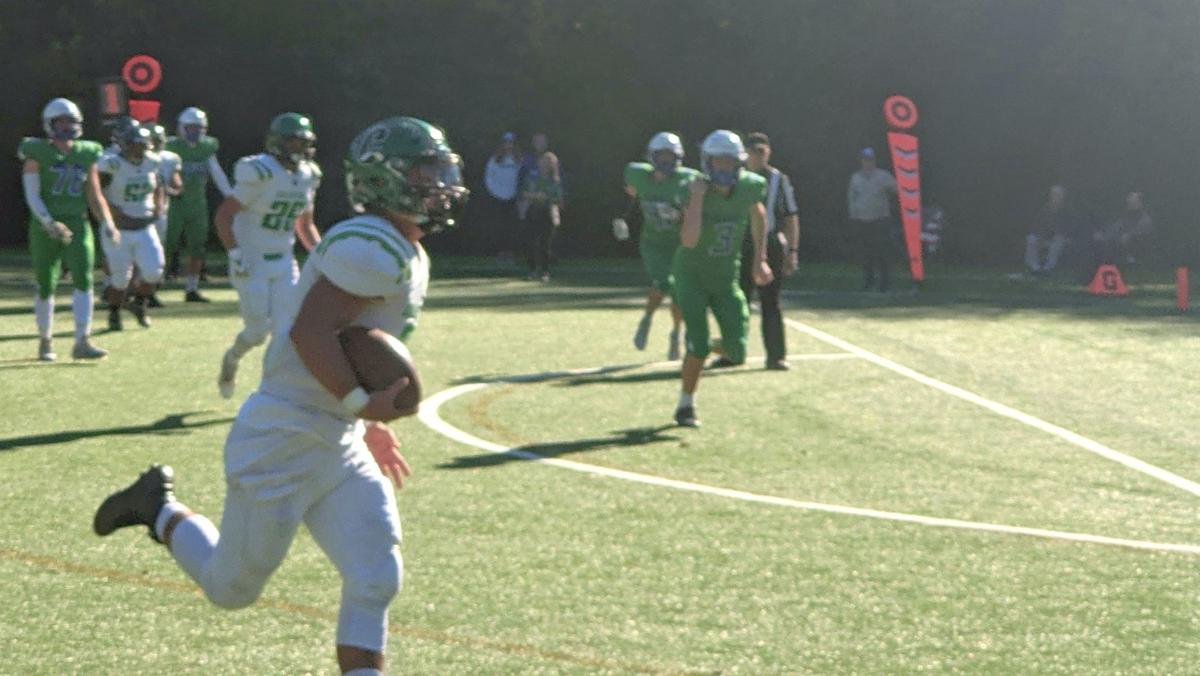 Calistoga quarterback Edgar Caldera keeps for a 14-yard touchdown run against Branson in the first quarter Saturday in Ross.

ROSS — This year's Calistoga High football team was a mirror image of the town that is proudly printed across the Wildcats’ chests, as they were a bunch of tough, blue-collar players who set high goals and worked very hard to achieve them.

They were led by a small group of players who as freshmen had taken command of a struggling program and become instant contributors.

On Saturday afternoon in Marin County, that senior core walked off the field for the last time in Wildcats uniforms after fifth-seeded Calistoga came up short against undefeated No. 1 seed Branson, 68-37, in the semifinals of the North Coast Section Eight-Person playoffs.

Branson has been a powerhouse in eight-person football since starting its program halfway through the last decade. The Bulls have gone 37-5 overall since their 2016 debut, with only one postseason loss. Their town is not so blue-collar. In fact, visitors turning off Sir Francis Drake Boulevard might not even suspect a small private school is nestled in the hills. A couple of curves past million-dollar homes and atop a small canyon is a campus with an exclusive, country club feel. One end of the field is surrounded by a gymnasium with large windows.

Calistoga (6-3) gave the Bulls (9-0) two of their hardest challenges this season. The Wildcats fell just 32-30 to them in Calistoga on Nov. 5 in a league game before a forfeit by first-round playoff opponent South Fork gave the Wildcats a quick chance at redemption. But Calistoga struggled against the Bulls’ passing game in the rematch.

George Gale, Branson’s lanky, 6-foot-5 junior quarterback, completed his first seven passes and had success through the air for most of the contest, finishing 19 of 29 for 478 yards, seven touchdowns and three interceptions.

His 32-yard completion to Zach Olrich set up a 3-yard touchdown run by Lucas Segal that put Branson on the board first. With the field having one goal post, only two-point-conversions were attempted by either team. Gale found Spencer Grant for the first one to push the Bulls’ lead up to 8-0.

Calistoga was a hard-nosed running team when current senior Christian Caldera was its quarterback as a freshman and sophomore, before the 2020 season was canceled due to the COVID-19 pandemic. His sophomore brother, Edgar Caldera, called the signals the first half of this season. But Edgar had to represent the family himself when Christian, now a running back, was sidelined by a broken arm. Edgar was moved to running back in recent games, including the first one against Branson, while senior Yuliani Caballero and junior Christian Ramirez threw the ball.

Edgar Caldera was back under center on Saturday and had success early on targeting Caballero on quick passes, but his fourth pass found the wrong jersey. After showing quality hands on the Bulls’ first two-point conversion, defensive end Grant snagged a Caldera pass. The Bulls couldn’t capitalize on the interception, however, and Calistoga did find the end zone when it got the ball back.

After a huge kick return by senior Isaac Garcia, Caldera faked a handoff to the left side, rolled out to the right and dove to touch the pylon at the end of a 14-yard touchdown keeper. A conversion run was stuffed at the line of scrimmage, keeping Branson up 8-6.

The Bulls answered right back, as Gale completed a seven-play drive with a 19-yard touchdown pass to Alexander Getty for a 14-6 advantage. Calistoga followed by turning the ball over on a snap-miscommunication fumble, as Will Schuler jumped on the ball for the Bulls. Gale ended the first quarter with a 20-yard touchdown pass to Getty, followed by a Segal conversion run that made it 22-6.

After a quick turnover on downs by the Wildcats, Gale found Olrich with an 18-yard connection to put the Bulls up 28-6.

Down by 22 points, Calistoga’s hopes were already dwindling, but the Wildcats battled back in the second quarter. Caldera found Garcia for a 39-yard completion and gained 9 yards on a keeper before floating a 4-yard scoring strike to Garcia on a fade route. Marvin Marin snagged Caldera’s conversion pass to make it 28-14.

The Wildcats grabbed their first of three interceptions on the following drive, as Ramirez got the ball back at the Branson 10-yard line. Caldera punched in the score a few plays later to bring the Wildcats within 28-20.

Behind a spirited crowd of traveling fans, they forced a Bulls punt less than two minutes before the halftime break. Caldera and Caballero fueled the ensuing drive, as the Wildcats started lowering their shoulders and powering forward for extra yardage. This was most clear on a simple screen pass to Caballero. The senior caught the ball on the left side of the field and was engaged 10 yards downfield by the Branson secondary. The wide receiver couldn’t be taken down easily, gained an extra 14 yards with multiple defenders holding on to him. The extra effort pushed the Wildcats into field goal range and Garcia blasted home a 31-yard field goal to give his team just a 28-23 halftime deficit.

“Since freshman year it's been like all about that ’Cat pride, that pride that you have to carry with you,” Caballero said. “That’s what I think being a Wildcat is, just carrying that pride with you all the way through the game. That's what I think about when I’m out there.”

The second half started as well as Calistoga could have hoped for, as Alexis Rios intercepted a Gale pass on the first play. Unfortunately for the Wildcats, the momentum from the second quarter on offense didn’t carry over to the second half, as the Bulls stopped the Wildcats on three straight rushes and forced a turnover on downs. Gale then found a wide-open Julian Ahearn on a 51-yard touchdown pass to push Branson’s lead back up to two scores, 34-23.

The Bulls’ defense picked up its third turnover of the afternoon when Callahan Green grabbed an interception over Caballero, but Javier Rodriguez intercepted Gale on the following drive.

Branson found the end zone next when Olrich took a Gale pass and broke a tackle for a 50-yard touchdown, making it 42-23 just four minutes into the half.

Caldera left everything on the field but got hit so much he had to exit the game in the fourth quarter because of injury.

“That is all you can ask for,” Kohler said of Caldera. “He is a great kid and wonderful athlete. He kept fighting and he was sticking in the pocket and delivering the ball.”

Calistoga pulled within 42-31 in the third quarter on Cabellero’s 33-yard scoring jaunt and Caldera’s conversion keeper, but Branson tacked on a couple of scores at the end of the game to pull away.

The Wildcats should return Caldera and nearly their whole offensive line next year, and once again be one of the top three teams in NCS Eight-Person football.

“This program has helped me since the third grade,” said Caballero. “It’s something that has kept me on the right path and definitely something I want to keep doing in college. I'll see where I go from there.

“It means a lot to be a contributor to this program, and it’s not just me working. Everybody out here had to do their assignment and work together to make this all work.”

Branson will host No. 2 seed Stuart Hall (5-3) for the section title at 1 p.m. this Saturday. The Knights blanked Upper Lake 12-0 in the other semifinal Friday night in San Francisco.

Calistoga quarterback Edgar Caldera targets Marvin Marin (25) with a pass against Branson on Saturday in Ross.

Calistoga's Marvin Marin makes one of his four catches for 58 yards against Branson on Saturday in Ross.

Calistoga quarterback Edgar Caldera keeps for a 14-yard touchdown run against Branson in the first quarter Saturday in Ross.