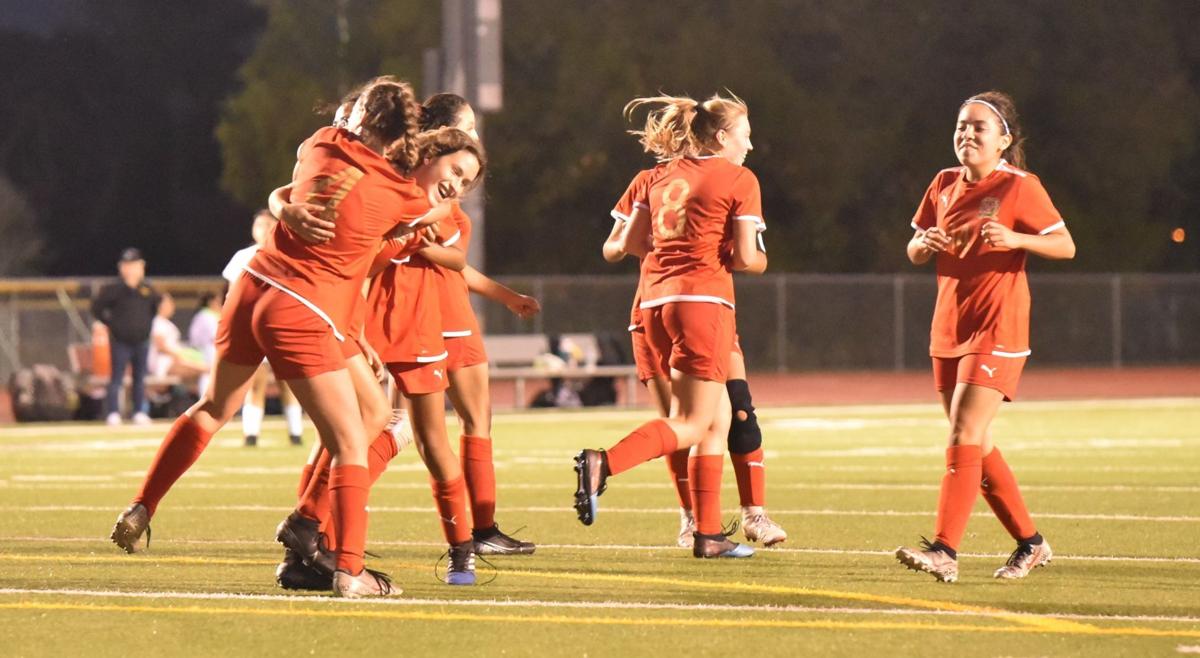 St. Helena's Eva Bowen, facing at left, is congratulated on her goal by Aubrey Moura (4), Mabel Wilms (8), Emily Escobedo Fabela, right, and others during the second half of Wednesday night's playoff game against Willits. 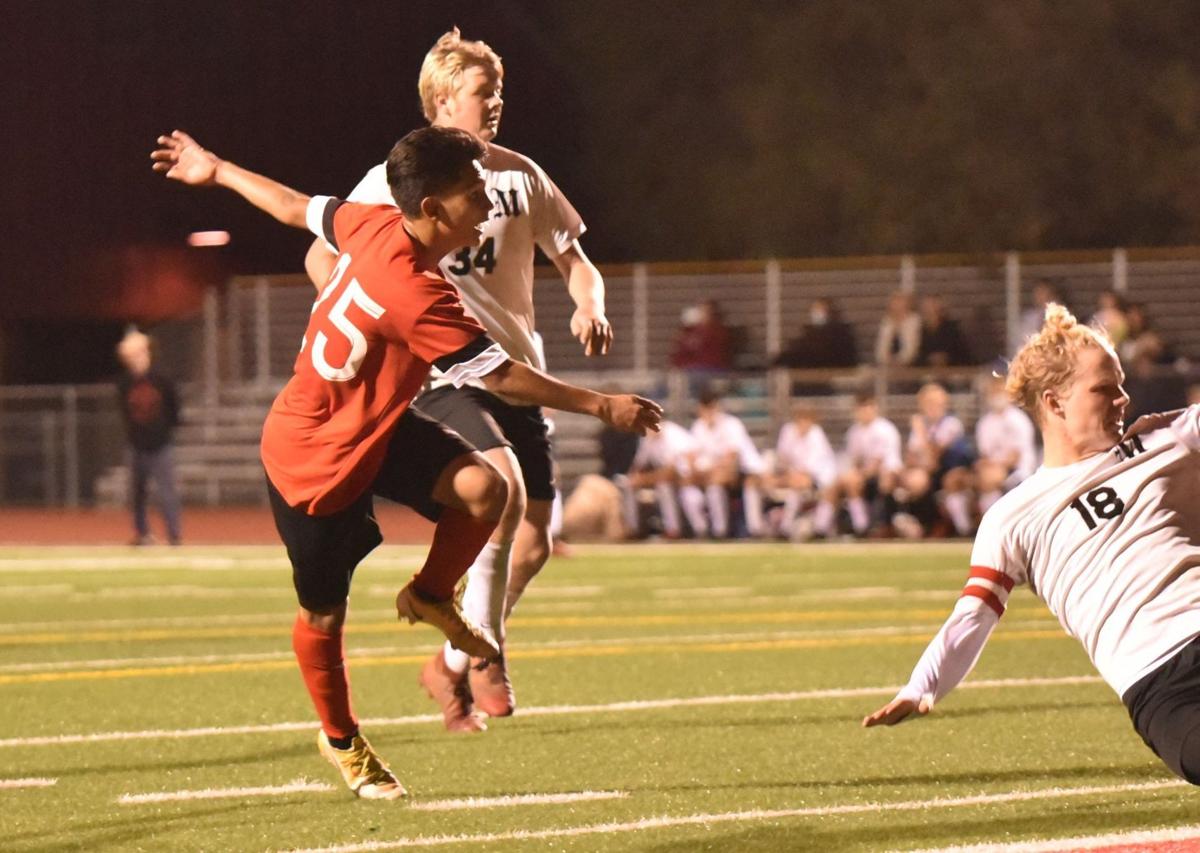 St. Helena's David Lopez (25) scores one of his four goals against McKinleyville on Wednesday night. 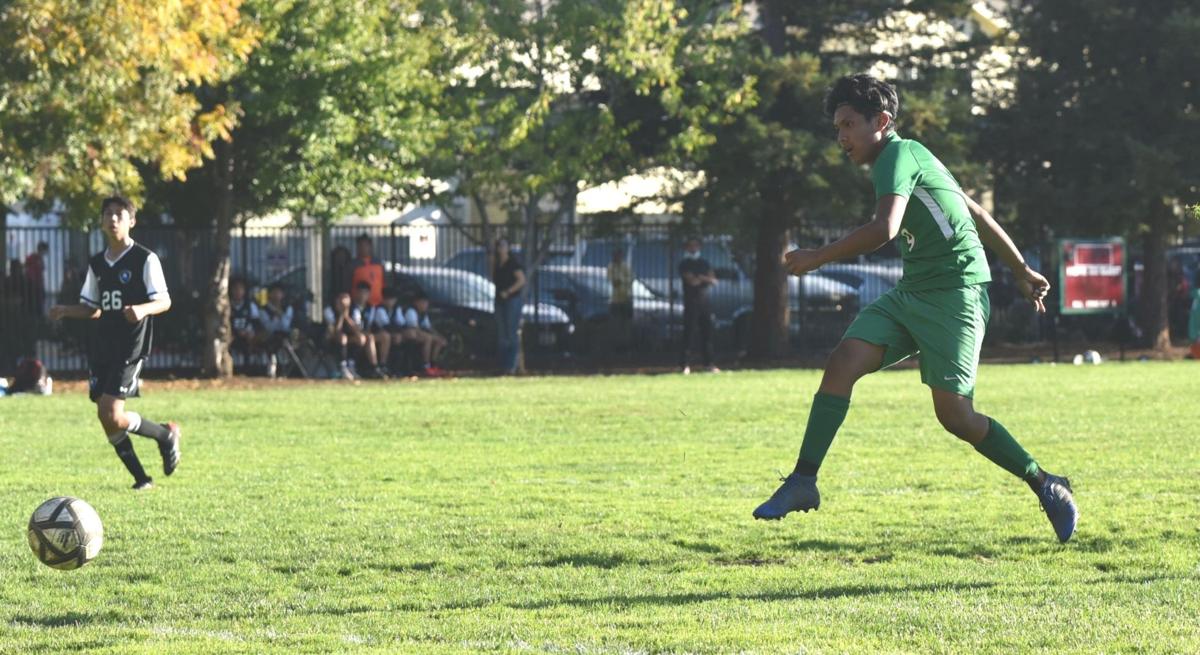 The North Coast Section seeding committee seeded the St. Helena High girls soccer team only one spot above Willits despite the Saints having outscored the Wolverines 12 goals to nil between their two league meetings this season.

The third time was not the charm for No. 9 seed Willits, either, but the visitors didn’t let this one get out of hand as the eighth-seeded Saints prevailed just 3-1 at Bob Patterson Memorial Field on Wednesday night.

“Of all our games, this was by far one of the most controlled and organized ones we’ve had,” St. Helena head coach Milton Gallegos said.

Mia Hernandez gave the Saints a 1-0 halftime lead, Eva Bowen made it 2-0, and Kaylee Moura converted a penalty kick with five minutes left.

“We definitely put it to Willits the first two times we played them,” Gallegos said of the 8-0 and 4-0 wins. “But they must have learned our attack and our style because they had a very high-pressing, high-impact scheme this time. They stacked a lot of players on the back line that definitely held us from getting (shots on goal). We just had to counter it.

“Our passing was crisp, our attacks were on. We just lacked a little bit of that finishing away from their keeper. We couldn’t do anything comfortably because they were pressing sometimes two players at a time. They weren’t attacking much. They were more, I think, possibly playing for a tie in the hopes that maybe they could catch one because we had the ball about 80% around their goal.”

Freshman goalkeeper Piper Pike got the clean sheet in her playoff debut for the Saints.

“Piper didn’t really have that much to do back there, but I think that’s because they were trying to stop us and try to catch us off guard on a counter.”

The coach complimented Mabel Wilms and Aubrey Moura for “holding down our center midfield position and that co-captain Kaylee Moura did a good job on the back line. He said moving co-captain Kiara Munoz-Gonzalez, who had defended in the midfield all season, to the wing back “really added another element to our attack.”

The Saints will visit No. 1 seed Arcata in the quarterfinals at 3:30 p.m. Saturday at McKinleyville High in Humboldt County.

Juan Garcia put the fifth-seeded Saints (16-2) on the board in the 22nd minute and David Lopez and Aaron Cruz added goals for a 3-0 halftime lead in their NCS Division I playoff opener against the visiting Panthers (1-11-5), the 12th seed, on Wednesday night.

In the second half, goals by Andres Velazquez, Leo Rodriguez and Anthony Montanez were followed by three straight from Lopez, completing his double brace. The Saints added another goal in the final minutes.

“I’ve got a talented bunch,” Saints head coach Ozzie Gallegos said. “Yeah, there is coaching involved. I show them where the runs need to be made and teach them how to see the game better, and today we were actually looking for those open spaces versus just sending it (kicking long balls).

"Throughout the whole season we’ve just been sending, sending, sending and running the same play over and over again, but this week we practiced moving the ball to Aaron (Cruz), but after Aaron we need to have another option. That’s what got us going today, the fact that it wasn’t just one guy dominating. We had all of our guys taking shot after shot.”

Asked if it was a concern that it took 22 minutes to score, Gallegos said there’s always a feeling-out period against a program St. Helena hasn’t faced in at least 15 years.

“We were trying to settle in and get a really good idea of how to break them down. They two good defenders, but once we broke them down, we were able to get through and things starting going our way.”

He said Lopez and Velazquez were “amazing” in the midfield — “I’ve been waiting for that for a while, for them to dominate” — and that Brandon Diaz Fregoso “held it down in the back” and that “Aaron was Aaron up top.” He was also pleased to see Gino Hanna keep things moving.

“Gino was kind of a sleeper out there but he created a lot of things,” including helping Cruz score.

The Saints were to visit fourth-seeded Cloverdale (15-1-1) — a league foe that had handed their only two losses all season, 2-1 and 2-0 — on Friday night. The result was not available at press time.

“It’s looks like the stars and everything lined up again because we get another shot at Cloverdale,” Gallego said, “and that’s what we wanted.”

It was definitely a game Lopez wanted because he missed the first two against the Eagles because of an injury.

“I play for the team, for the school, and it’s important for St. Helena to make it to the top this year,” the junior said.

The No. 5 Wildcats hosted the No. 12 Grizzlies (4-6-1), which they had routed 8-1 and beaten 5-3 in league play, and improved to 3-0 against them in Wednesday’s NCS Division II playoff opener at Logvy Park.

Freshman Diego Flores scored in the 15th minute, Isaac Garcia three minutes later, Alexis Escobedo in the 25th minute, and Brandon Juarez with four minutes left in the first half for a 4-0 lead.

The Wildcats took a 9-4 record into Friday’s game against College Prep of Oakland at Tom Bates Sports Complex in bayside Berkeley.

“We’re looking good We’re expecting it to be a good game,” Contreras said. “I think we have everything in our power to win that game.”

The result was not available at press time.

The Vine Valley Athletic League champion Crushers (13-5), seeded 10th, fell in the first round of the NCS Division I playoffs to the No. 7 Dons (14-11) on Thursday.

The Crushers were held 5.5 goals below their per-game scoring average.

A roundup of recent high school sports results for teams in the Napa Valley.

St. Helena's Eva Bowen, facing at left, is congratulated on her goal by Aubrey Moura (4), Mabel Wilms (8), Emily Escobedo Fabela, right, and others during the second half of Wednesday night's playoff game against Willits.

St. Helena's David Lopez (25) scores one of his four goals against McKinleyville on Wednesday night.