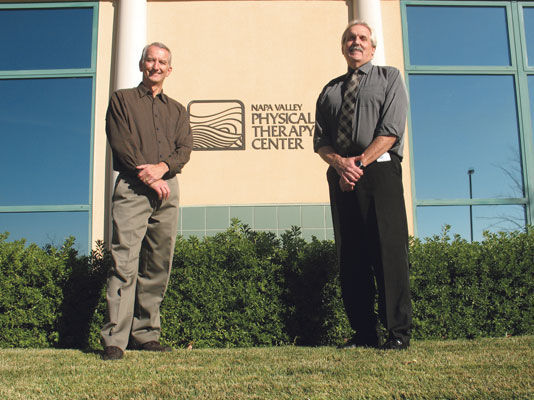 Glenn Hughes, left, and Bruce McCall will be inducted later this week into the Vintage High School Athletic Hall of Fame. A dinner and ceremony to honor the newest inductees is on Sept. 9 at the Elks Lodge of Napa. 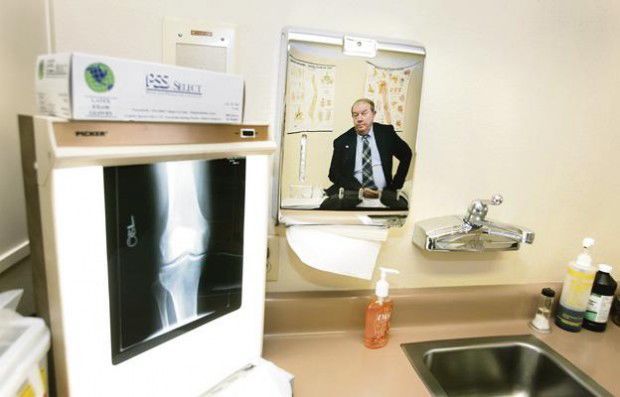 Dr. J.C. Pickett has been elected into the Vintage High School Athletic Hall of Fame as a special category inductee. The West Virginia native served Napa football teams for 30 years.

They have been there to consistently provide care and support as professionals in their field – Dr. J.C. Pickett as a team physician and orthopaedic surgeon, Bruce McCall and Glenn Hughes as physical therapists and trainers.

They have worked closely with not only the athletes, but the coaches, offering assistance.

McCall, the co-owner of Napa Valley Physical Therapy Center (NVPTC), has worked with local high school teams since 1974, his first year in town. Since 1989, McCall has been associated with the sports programs at Vintage High, both boys and girls programs. He is also a member of the school’s athletic boosters club.

Pickett, who is also retired, worked as the team physician for both Napa and Vintage, and as the chief of staff and chief of surgery at Queen of the Valley Medical Center. He was president of the California Medical Association (1999-2000) and president-elect (1998-1999). He has also been a member of the American Medical Association.

The three of them – McCall, Hughes and Pickett – will be inducted later this week into the Vintage High Athletic Hall of Fame. A dinner and ceremony to honor the newest inductees is on Sept. 9 at the Elks Lodge of Napa.

The 10-member class – which also has Frank Silva, Norma Hill, Jim Lanterman, Conrad Alvarez, Mike Hunter, Lori Stultz Gentry and Mark Nicol – was elected by a selection committee. The Hall of Fame’s board of directors approved the class.

The newest members will be introduced at Vintage’s Hall of Fame game against Davis on Sept. 8 at Napa Memorial Stadium.

McCall, Hughes and Pickett will enter the hall in the special category.

To be eligible for induction in the special/other category, an individual must have participated in an activity that brought honor or positive recognition to the athletic department at Vintage High, contributed in some substantial and significant way to the improvement of the Vintage High athletic program, and lived an adult life that did not discredit the school or the community.

“It’s just been a wonderful 43 years with all the other volunteers behind the scenes that have done this,” said McCall. “I just can’t thank them enough. It’s made it really a pleasure.

“Over the years, meeting great people and enjoying what you’re doing, the time really does go quickly. I’ve had a lot of fun at it. I’ve had a great relationship with the coaches.”

“As with other recipients, I am very honored,” said Hughes. “I am honored to be nominated for the HOF, let alone be elected into the Vintage High School Athletic HOF. This award was a total surprise to me. For only eight years, I was directly involved with Vintage athletics, but had the good fortune to work with athletes from all the Valley schools for over 30 years. For all those years, it was never for personal or business recognition. Rather, I lent my service to the schools because I had fun and thoroughly enjoyed working with the athletes.”

“They were fun and enjoyable years. If I had to do it over again, I would,” Pickett said in a Napa Valley Register story in August of 2007.

McCall, Pickett and Hughes are members of the Napa High Athletic Hall of Fame.

A closer look at the three inductees:

Pickett volunteered his time as team doctor at football games from 1971 to 2001.

In 1971, Pickett recognized the need for a medically-sponsored program that would benefit all athletes at Napa High.

Pickett contacted other doctors who were interested in donating time to serve as a team physician on the sideline during each football game. He was assisted by colleagues in this capacity.

“I knew from the time that I was a junior medical student — which at that point was when you started seeing patients — that I wanted to go do surgery,” said Pickett. “It’s just what I wanted to do. I spent two years in general surgery. And as I got through my rotations I realized I really liked orthopaedics best, and I like sports medicine. That was what brought me into it.”

Pickett grew up in Morgantown, West Virginia, and went to West Virginia University and the Medical College of Virginia.

He was a surgical intern, surgical resident and orthopaedic resident at the Medical College of Virginia Hospitals.

“I’ve been very fortunate being able to do what I do,” said Pickett

He was president of the Napa County Medical Society (1980-81). He was a clinical instructor at Ohio State University (1963-1970), served as an orthopaedic consultant to Napa Valley College, and has been affiliated with the Western Orthopaedic and California Orthopaedic Associations.

As physical therapists and athletic trainers, they have donated their time and services by taping ankles, helping with pre-game stretching and treating injured players for Vintage and Napa high schools.

McCall grew up in Santa Maria and went to Righetti High School. He became interested in sports medicine after suffering an injury during tryouts for the basketball team his freshman year at UC Santa Barbara.

“I was really down in the dumps,” he said. “I didn’t know what I wanted to do. This therapist came in and really helped me. All of a sudden, I got very interested in what he was doing. He’s the one that turned me on to working with the trainer at UC Santa Barbara. I just really fell in love with it, and the different aspects.”

McCall is a member of the American Physical Therapy Association and the National Athletic Trainers Association. He worked with the intercollegiate teams at UCSB and did his postgraduate work at UC San Francisco Medical School.

McCall became a partner with Ernie Mann at NVPTC in 1979. NVPTC provides free treatments to the local student athletes who are injured.

He spent 15 years at Napa as its trainer and has been at Vintage for the last 28 years.

“I went in to help people get better,” said McCall. “We open up our services. If it’s really something serious, like a severe knee injury, we’re going to obviously tell them you‘ve got to see your doctor. If they turn an ankle and it’s something we think we can help get them back in a couple of days, we’ll do that free of charge. You try to help them rehab.”

Today, McCall and Rob Brandon are the co-owners of NVPTC. Brandon assists Napa High as its trainer.

McCall has been a leader in assembling a medical team that includes local physicians, EMTs, and student volunteers for the football games.

“The best memories and rewards that I have received are the friendships that I have made with administrators, coaches, teachers, the media, the medical teams, and most of all the young men and women student-athletes throughout these many years,” he said.

“Over the years, it’s just splendid company that I’ve been associated with.”

Dr. Brian Freeto and Dr. Michael Shifflett with the Napa Valley Orthopaedic Medical Group are the doctors who volunteer their time and services at football games.

Hughes was associated with Napa High from 1989 to 2015 and still assists occasionally on the football sidelines.

Hughes said he knew nothing about physical therapy until the last semester of his sophomore year at UC Santa Barbara.

He took a kinesiology class, taught by a physical therapist. He wanted to learn more about it.

He said the rewards of his career have been many, and have been all about the patients he has worked with.

“Being able to listen to them, to get to know them, and more often than not, to help them recover from their injury, illness or surgery,” he said.

A dinner and ceremony to honor the newest inductees for the Vintage High School Athletic Hall of Fame is on Sept. 9 at the Elks Lodge of Napa. Information about tickets and reservations are on the Vintage Crushers Athletic Booster Club website, www.vintageboosters.com. Tickets are $75 per person.

For more information, call Doug Messner, president of the Hall of Fame committee, at 251-9560.

Glenn Hughes, left, and Bruce McCall will be inducted later this week into the Vintage High School Athletic Hall of Fame. A dinner and ceremony to honor the newest inductees is on Sept. 9 at the Elks Lodge of Napa.

Dr. J.C. Pickett has been elected into the Vintage High School Athletic Hall of Fame as a special category inductee. The West Virginia native served Napa football teams for 30 years.