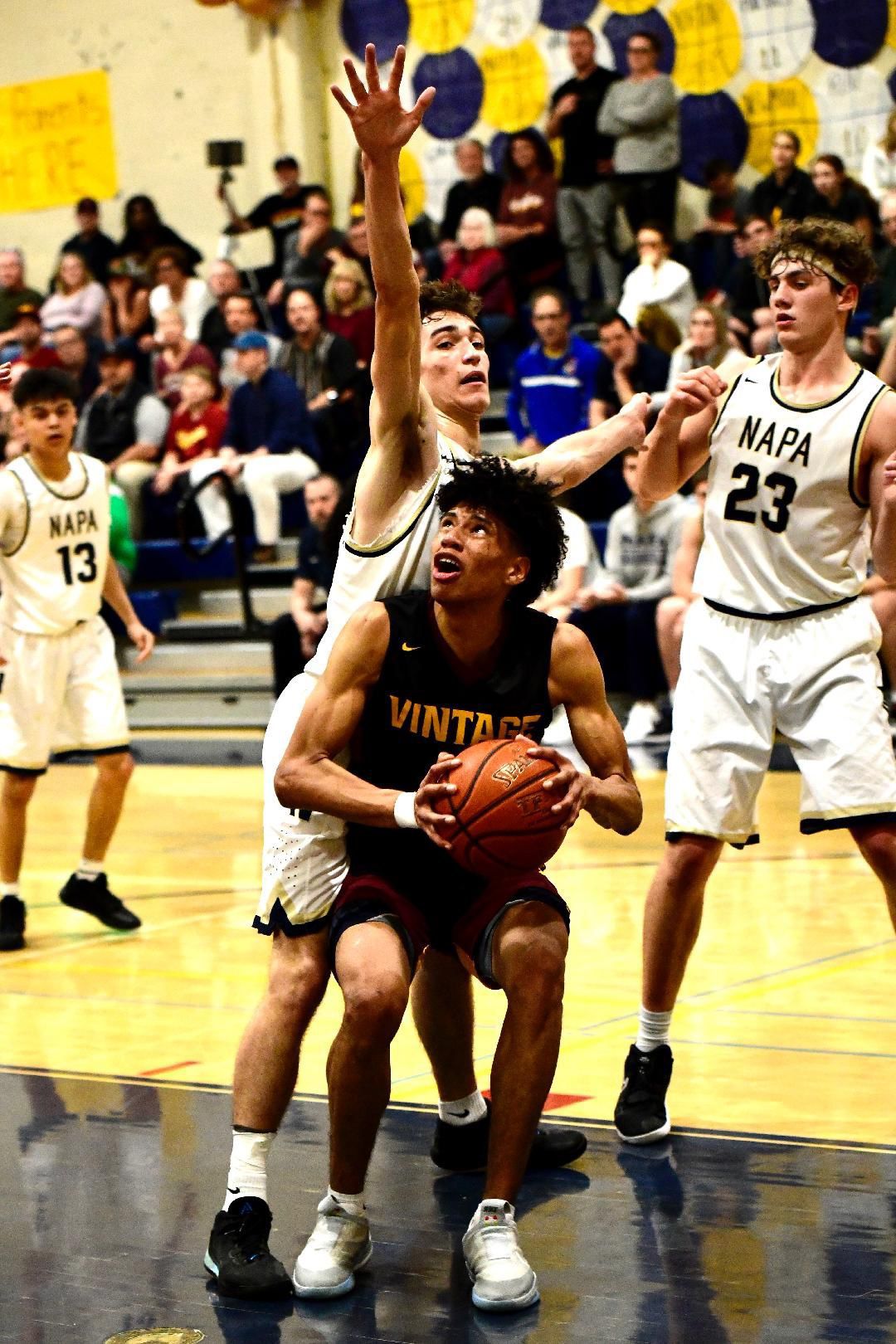 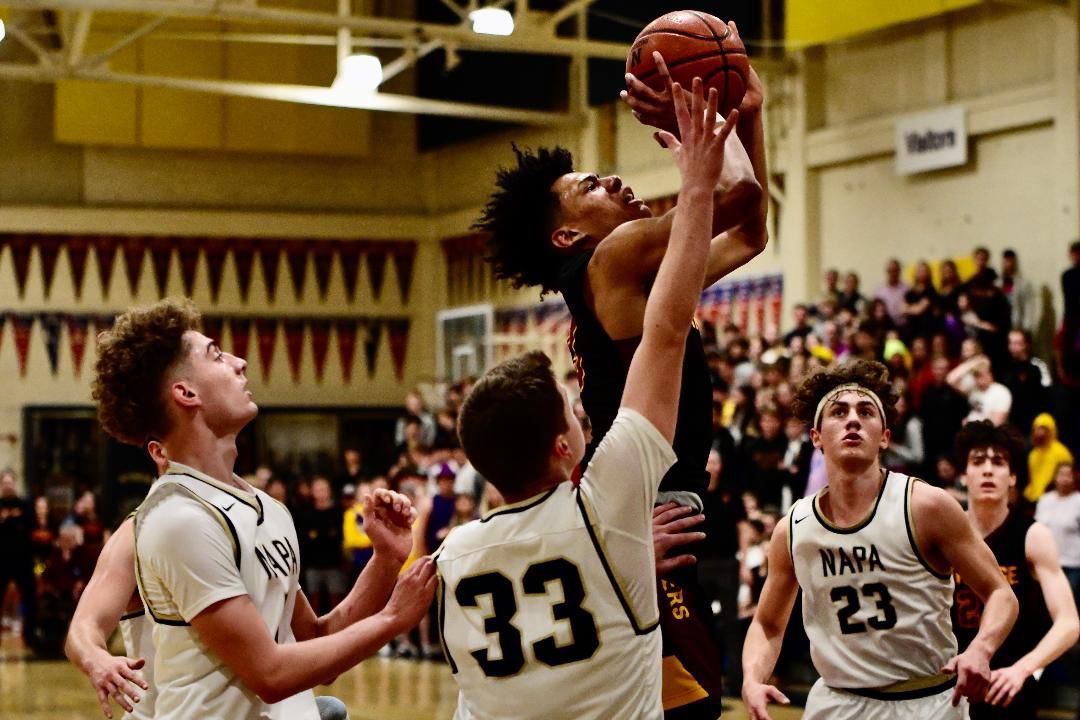 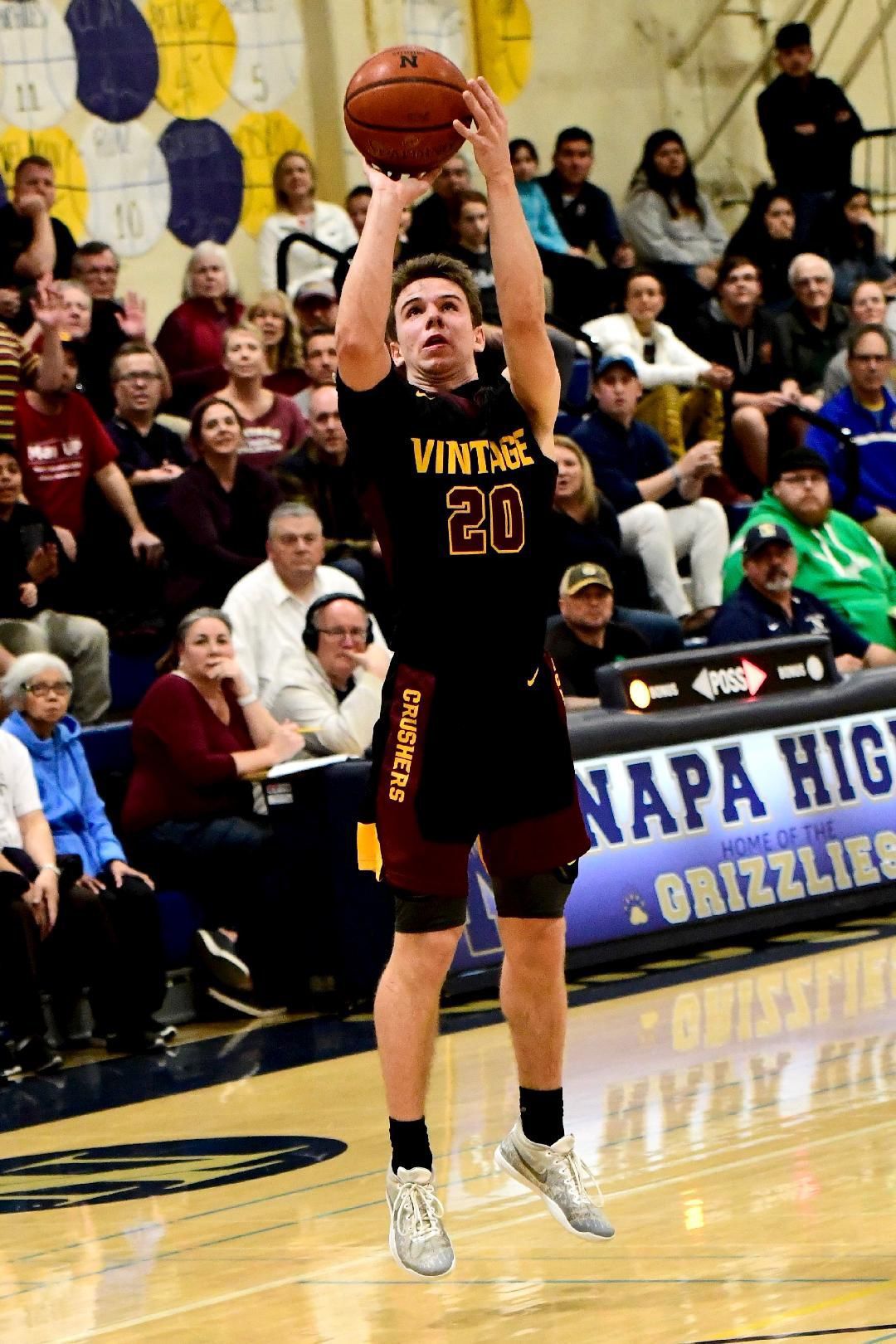 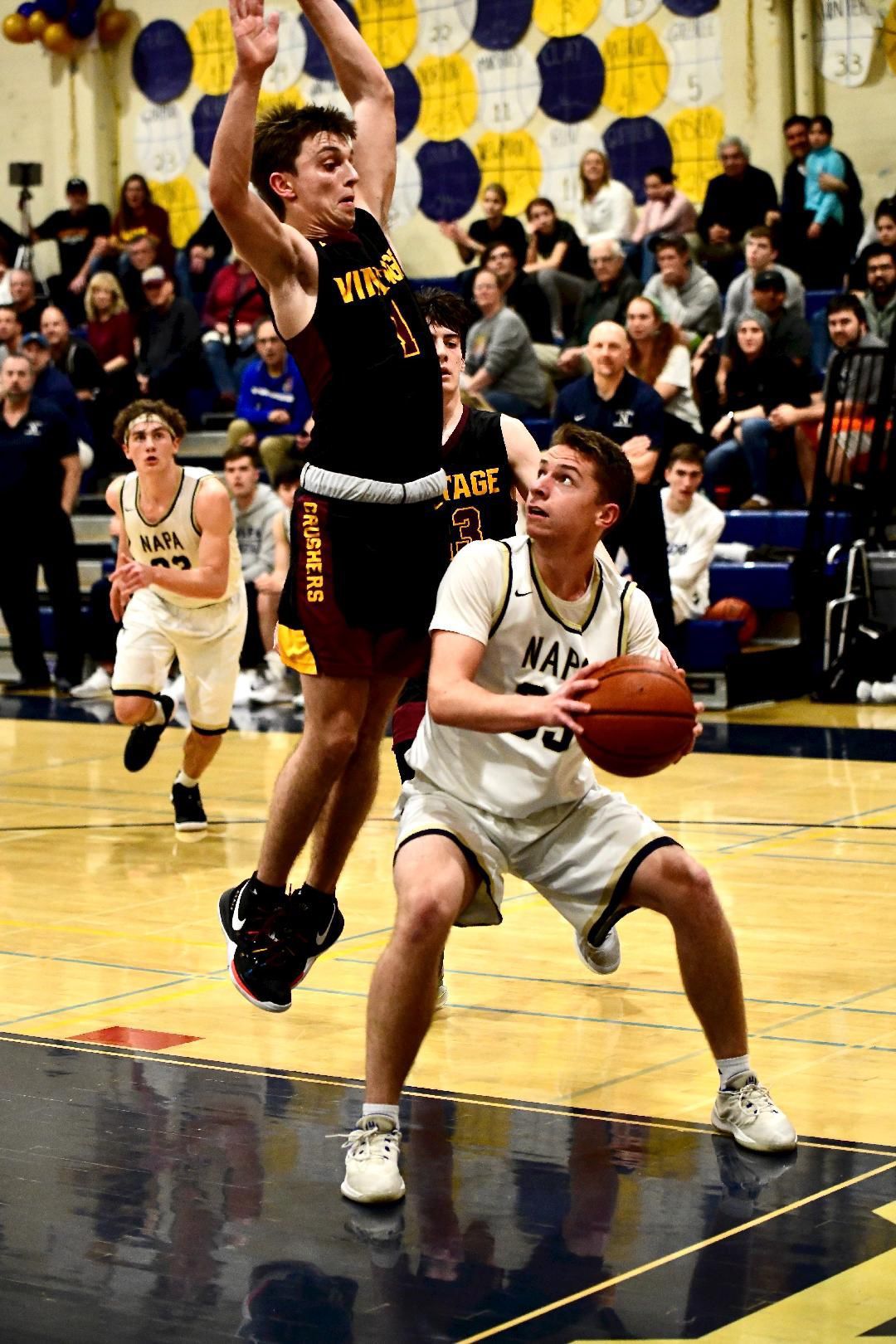 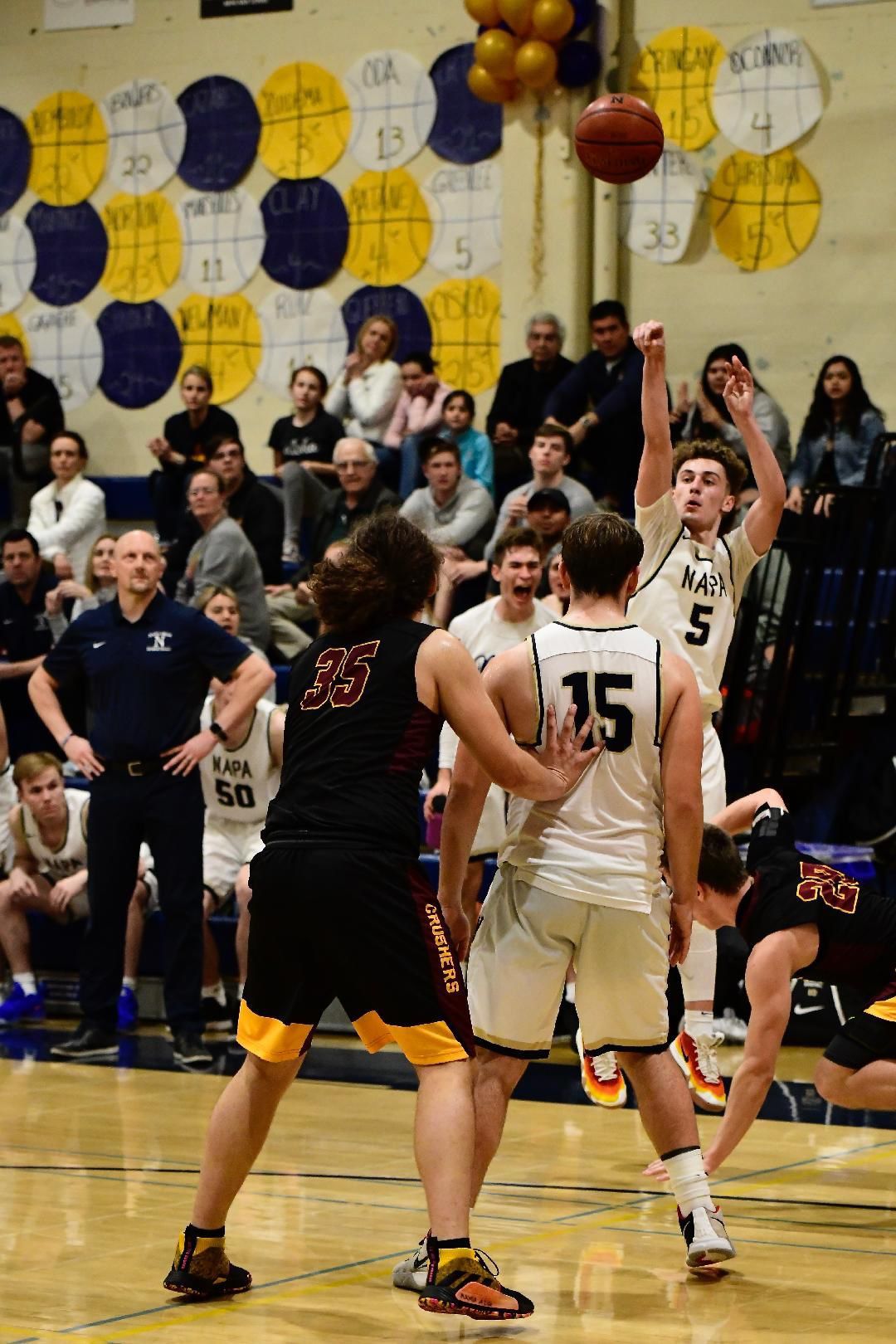 Napa High's Brayden Greenlee fires off a 3-pointer in front of his team's bench against Vintage on Friday night. 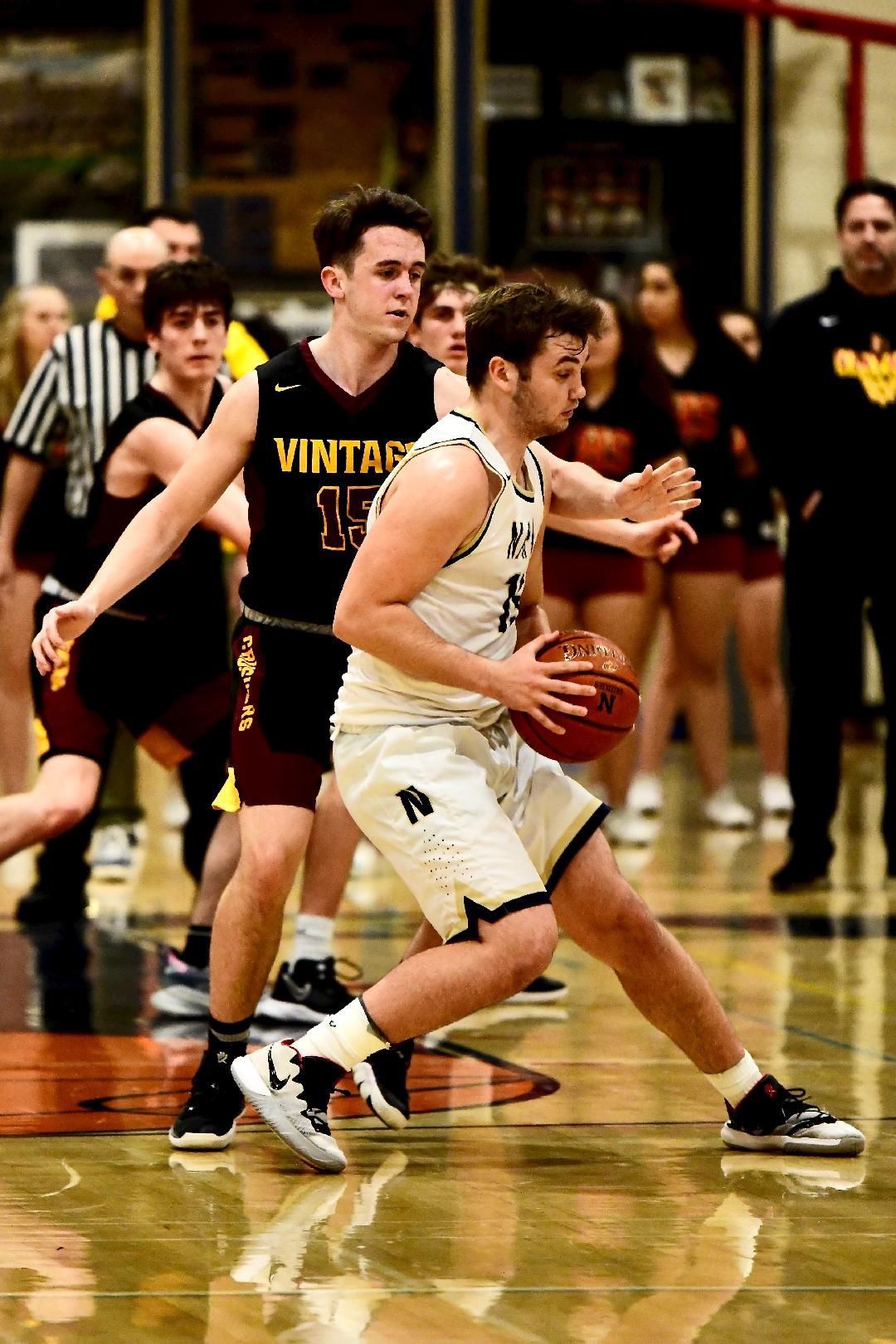 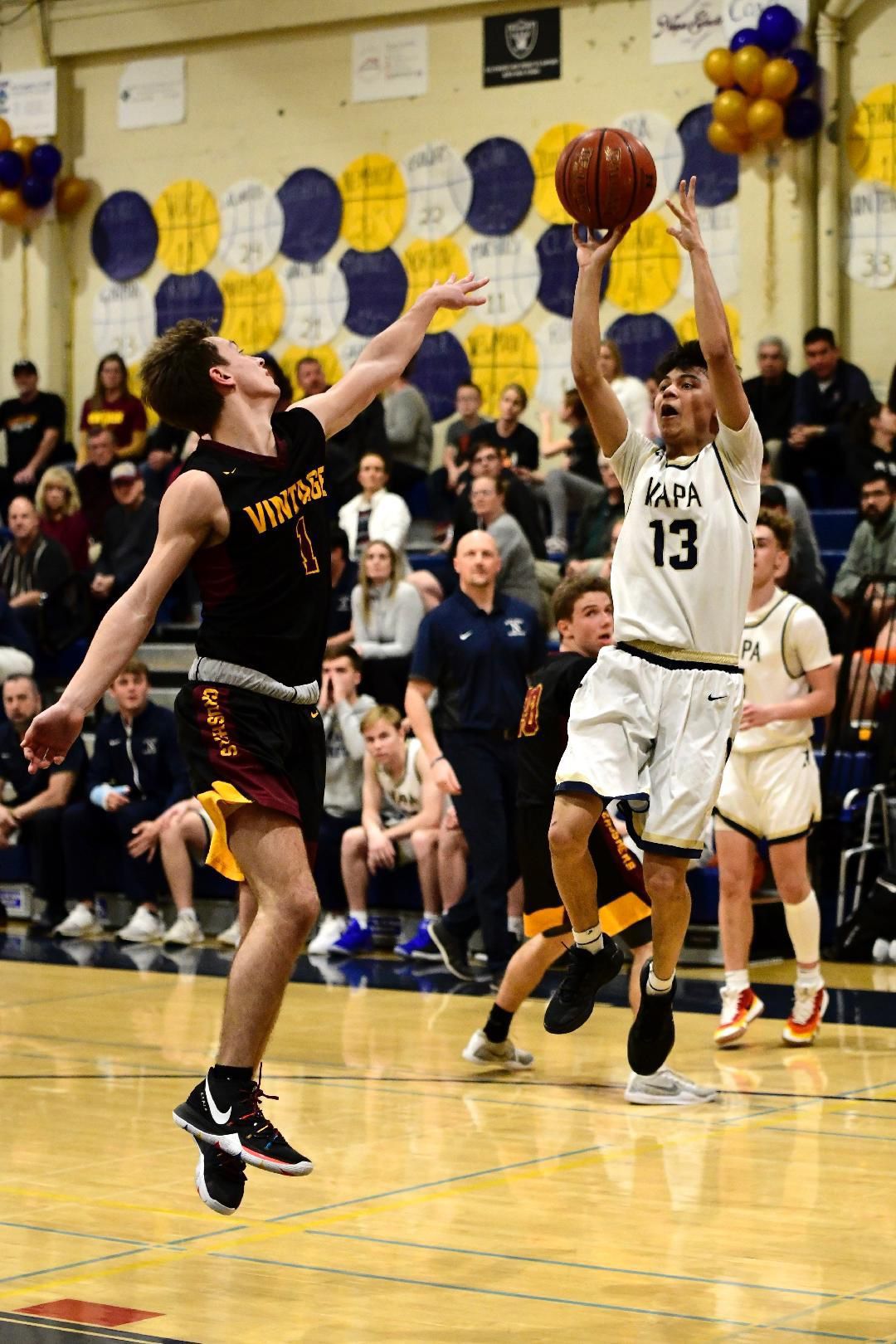 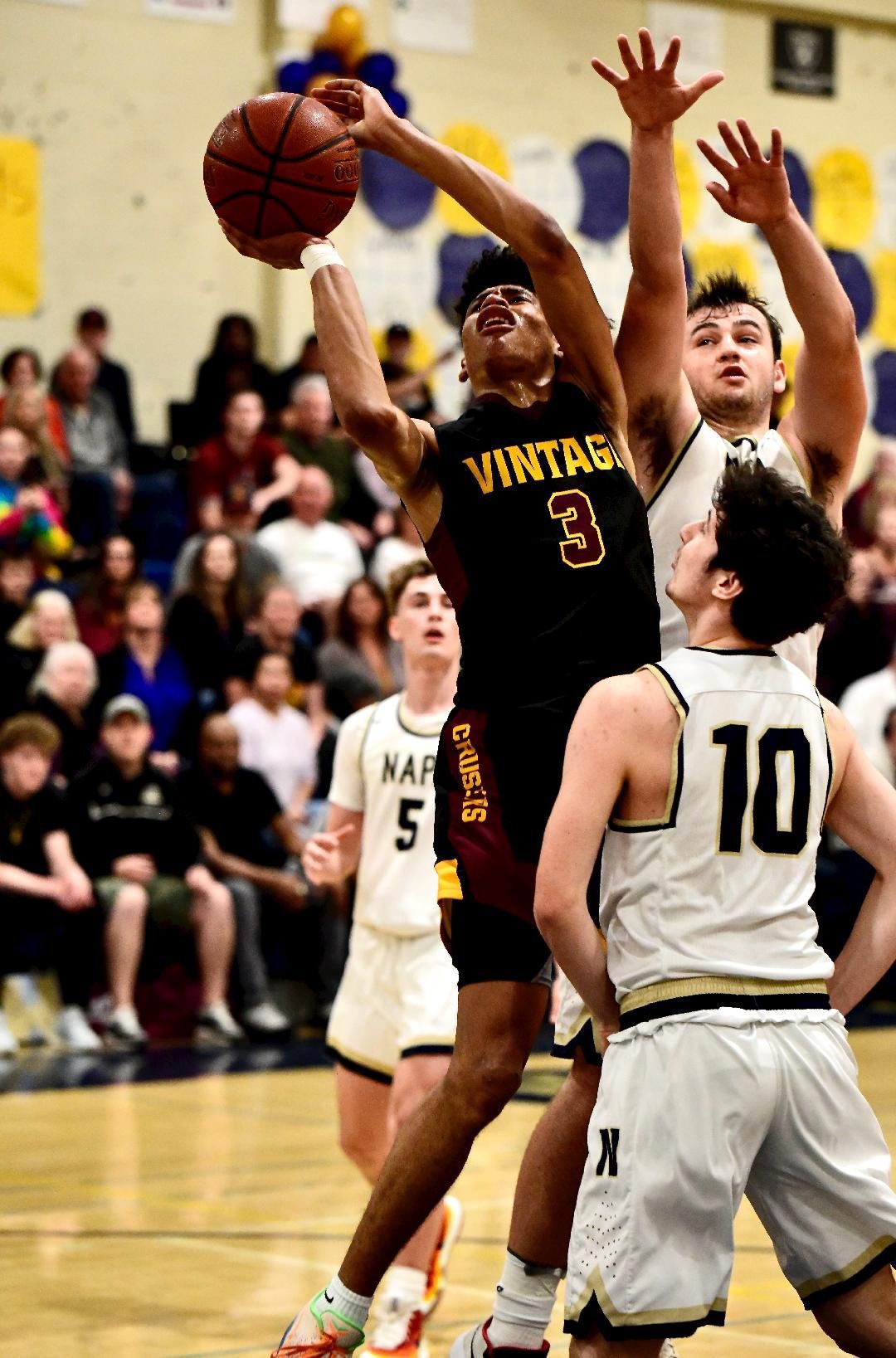 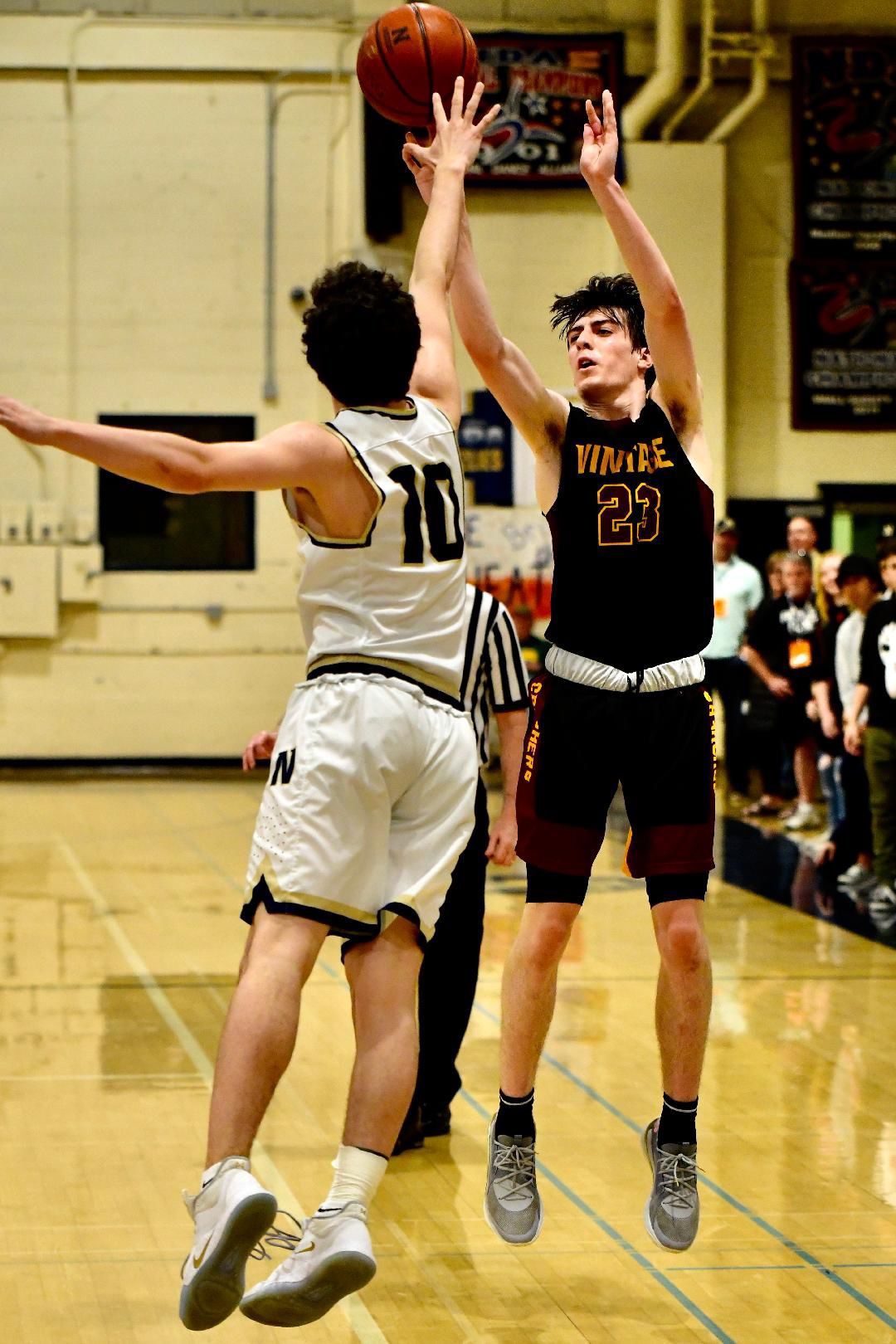 Josh McCormick hits a 3-pointer over Napa High's Danny Ruiz to put Vintage up by 6 points in the fourth quarter Friday night.

With 21 seconds left in the second boys basketball Big Game of the season, Vintage had the ball with a shot to win.

To the surprise of Loren Castro, the Crushers’ center was intentionally fouled with 13 seconds on the clock and the game tied at 47 apiece. The 6-foot-4 senior went to the free-throw line with a chance to take the lead.

Castro calmly deposited each shot into the basket in front of a wild, full crowd at Napa High’s Messner Gym. The Grizzlies raced down the court and got a solid look from Spencer Gorman. But the junior’s shot bounced off the rim into the hands of Vintage senior Imani Lopez as time expired.

With the 49-47 victory, the Crushers capped not only a Big Game season sweep but also their first Vine Valley Athletic League title.

“I wasn’t ready for it but, I mean, it was smart,” Vintage’s Loren Castro said of Napa High’s decision to foul him. “I had just missed two free throws. It was just for the team, to hit those (winning ones).”

“He has been struggling from the line, so we wanted to foul him,” Grizzlies head coach Zack Cook said. “Maybe he makes one, maybe he misses both and then we get the possession and we have 13 seconds left, rather than having them inbound and maybe isolating Imani while running out the clock and then him going to the basket and running into somebody for the foul.”

After a hard-fought contest, the Crushers retreated to the locker room. After about 10 minutes, the news slowly came out from Twitter that American Canyon had upset second-place Petaluma, 59-56. Because of a points-against tiebreaker, the Crushers have the edge on the Trojans even if Petaluma wins its final two VVAL games.

The Vintage locker room erupted in screams of joy when the Crushers learned the news.

“It feels really good to get that victory. It was a great team effort,” Castro said. “I am just glad we got the victory.”

With one more VVAL game, on Valentine’s Day on American Canyon’s Senior Night, Crushers head coach Ben Gongora wanted his team to stay in the present.

Vintage has struggled this season in the first half of many games, but has had a knack for thrilling comebacks. The Crushers’ early game strategy was clear, to slow Napa High star Brayden Greenlee, and Vintage successfully doubled-teamed the shooting guard whenever he went near the ball. The junior still picked up 5 points in the opening frame after some tough shots, but turnovers plagued Vintage in the first half.

Lopez started to find his groove for the Crushers in the second quarter. The 6-foot-2 senior weaved his way around defenders with multiple spin moves, but was the only Vintage player who managed more than 2 points in the first half.

Greenlee had 3 points in the second quarter, while sophomore point guard Tyler Oda supplemented the offense with some off-balance jumpers en route to a 12-point night. Napa went into the halftime break with a 23-14 advantage.

But Vintage came out with a new energy in the second half behind Lopez, who opened the third quarter on a 7-0 run by himself. Instantly back in the game, the Crushers turned it into a 10-4 run. Lopez would finish with a game high 29 points and add 10 rebounds for a double-double.

“We talked about it at halftime,” Cook said. “I knew that they had been down a couple times this year, I think the last two or three games at halftime. So I said ‘They are going to be confident coming out of the second half.’ They were in first place, so we knew they were going to come out and make it a game.”

The Grizzlies led by only four points going into the fourth quarter, when a quick technical foul against Napa started the unraveling of the hosts. Just 40 seconds into the quarter, the Crushers tied the game, 34-34, for the first time since early in the first quater.

As the Grizzlies attempted to regain their focus, Vintage struck with back-to-back 3-pointers from Logan Nothmann and Josh McCormick to grab a six-point advantage, the Crushers’ largest of the game.

“They made a couple more plays tonight,” Cook said. “They made a nice run in the third quarter and we had one of our scoring droughts that we have had a lot this year,” Cook said. “That let them get momentum and the lead, but I was happy that we fought back. Just a few more plays from Vintage tonight, so credit goes to them. They played well, and they played better than us.”

Greenlee and Lopez dueled it out down the stretch, Greenlee finishing with a team-high 21 points. The Grizzlies tied the game at 43 on two free throws by junior Jack Giguiere. Gorman gave Napa its last lead, 34-32, with two more free throws to finish with 7 points and 11 rebounds.

Lopez continued to have the momentum for Vintage. He hit two free throws and then a floater with a minute remaining to put the Crushers back on top. Napa answered back, but Vintage had the ball with 21 seconds left. Castro connected on his free throws, giving him 6 points to go with 11 rebounds for the game.

Vintage then covered Greenlee with a full double team and forced the final shot out of his hands.

“We’re pretty bummed that we lost,” Cook said. “But a couple of weeks ago we were down 41-19 over there at Vintage and in the third quarter they were just kicking our butts. So to make it a game and have it come down to the wire, I’m really proud of our guys. It would have been nice to win, but our guys can walk out of the gym with their heads up.

“Congratulations to Vintage. They are having a great year.

“Added Castro, “I am just proud of my boys for sticking in it. It was a rough one. I am just glad we got the dub.”

“It was a physical game,” Vintage coach Chuck Johnson said. “Both teams played with a lot of passion.”

The Crushers led by as much as 25-10 before Napa tied it in the third quarter at 28. Johnson took out his starters out and put in Erik Kvidahl, Lucas Bollinger, Noah Cockrell, Dustin Wyman and Chudnow and the new give extended the lead to 10, with Chudnow hitting two 3-pointerds.

Ian Reis converted a late goal to send first-place Vintage past Napa, 1-0, and complete the Big Game season sweep of the Grizzlies.

AmCan wrestling capped its VVAL season with a win over NCS-bound Justin-Siena on Wednesday night.

The Vintage High girls basketball team salvaged a split in the Big Game series this season, beating Napa 45-42 on the road Thursday night.

Napa High's Brayden Greenlee fires off a 3-pointer in front of his team's bench against Vintage on Friday night.

Josh McCormick hits a 3-pointer over Napa High's Danny Ruiz to put Vintage up by 6 points in the fourth quarter Friday night.