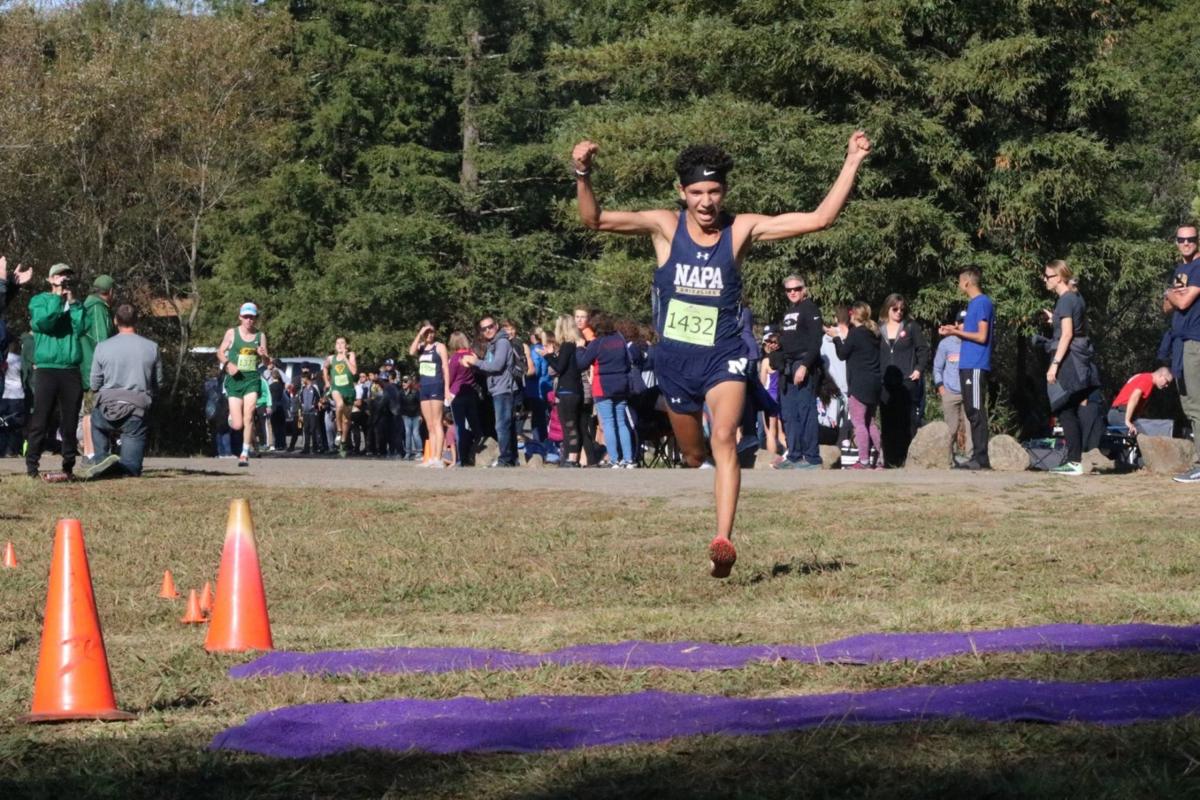 Napa High junior David Acuna celebrates as he is about to cross the finish line to win the varsity boys race at the Vine Valley Athletic League Cross Country Championships on Nov. 16 at Spring Lake Park in Santa Rosa. 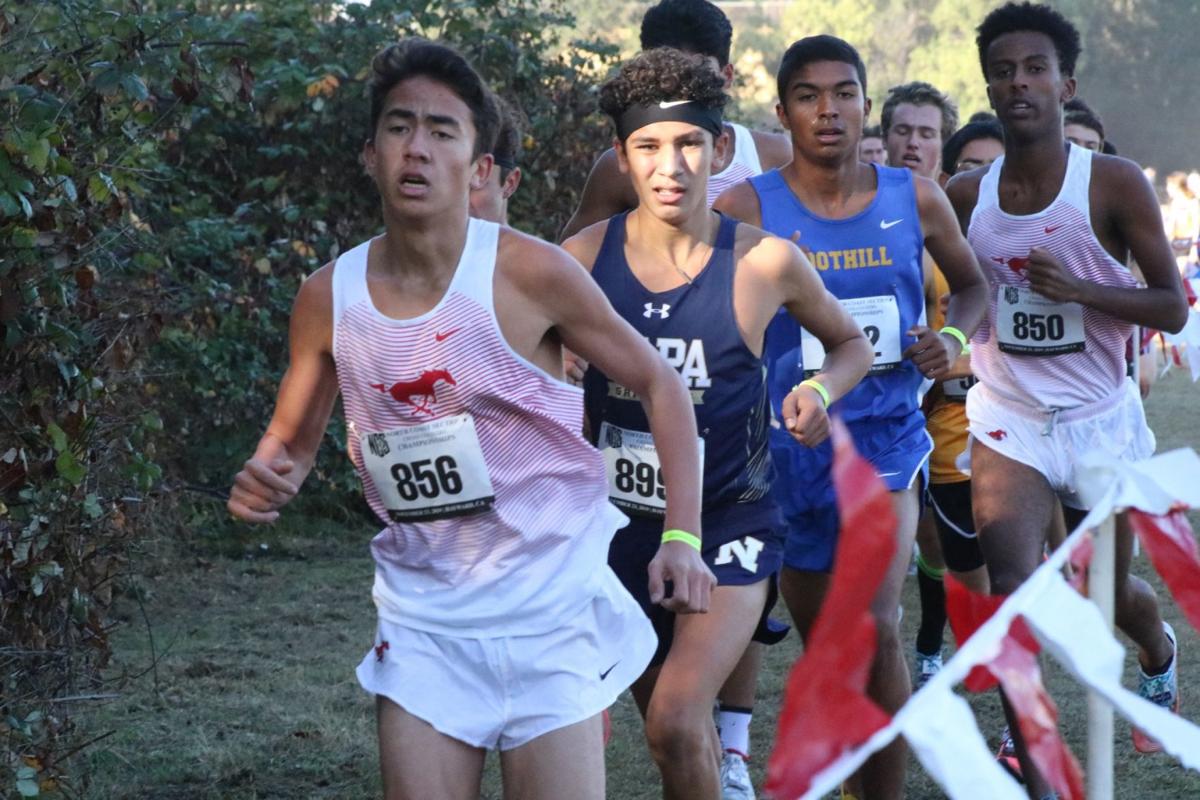 Napa High junior David Acuna is second in a pack during the North Coast Section Championships on Saturday at Hayward High. 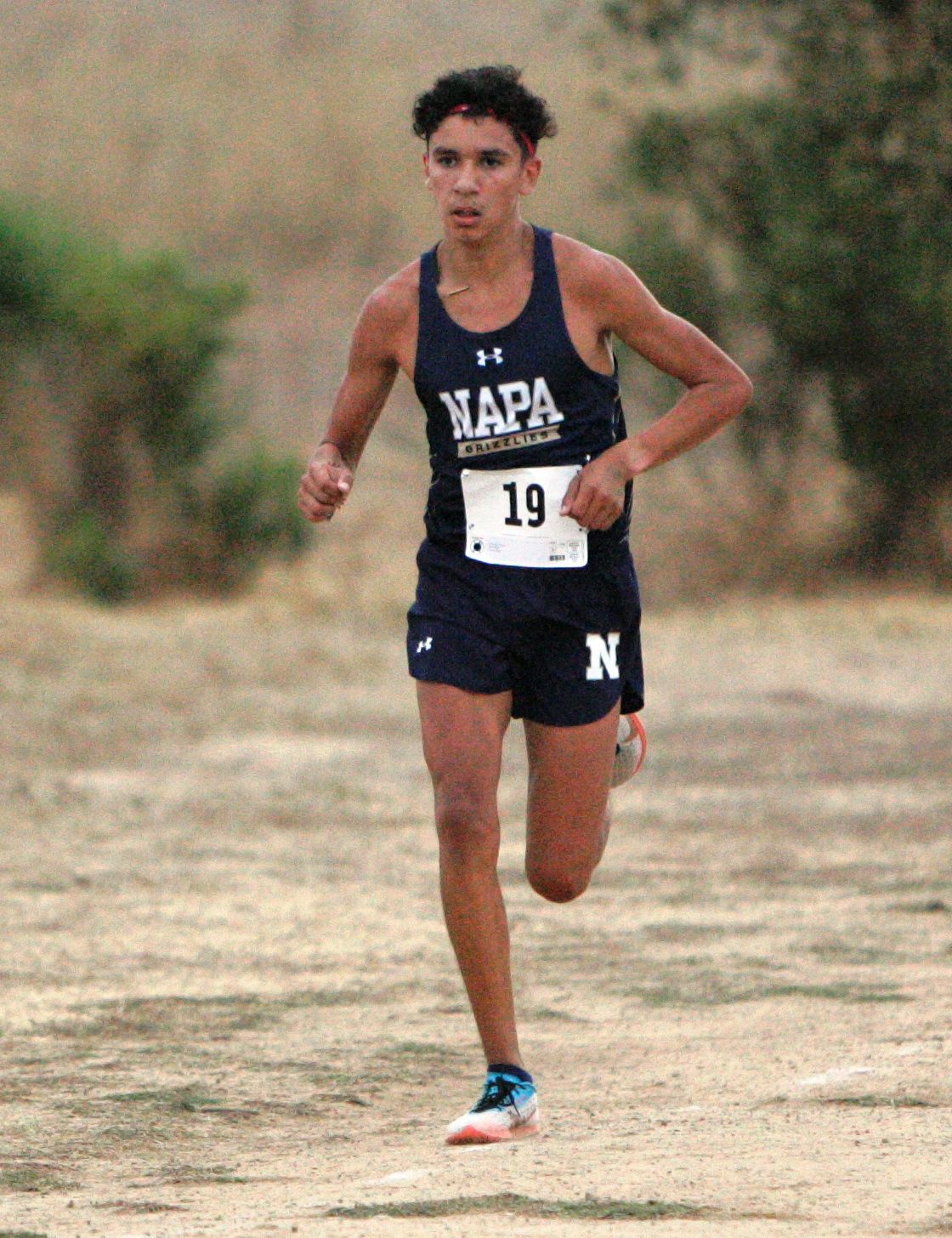 David Acuna became the first Napa High cross country runner in five years to qualify for the CIF State Championships, which will be held for the 33rd year Saturday at Woodward Park in Fresno.

With a 14th-place time of 15 minutes, 45 seconds in the 5K Division 2 race at the North Coast Section Championships this past Saturday at Hayward High, he was one of only four runners who qualified as individuals.

To advance individually, he to be one of the top four runners who were not on one of the three qualifying teams, and to finish in the top 14 overall. He just made it, and had to thank Napa head coach Derek Moore for that.

“Going into the last 200 meters, I believe I was in like 20th place,” he recalled. “I could hear Coach Moore yelling his lungs out, ‘You gotta go, you gotta go, now!’ I really had to dig in. I was hurting from the beginning, and telling myself to keep going.”

It hadn’t helped that four days before, he had bruised his knee on a table while making a video in his leadership class on, of all things, the cross country season.

Added Moore, “We were not sure David could even run. But he dug deep and, despite lingering pain, he ran the fastest race of his entire season. We will now work with him on preparing for Fresno.”

The last Napa High runner to get to state was Kyle Hawk as a senior in 2014, finishing 96th in the Division II race in 16:26. Hawk went on to run NCAA Division III cross country for Connecticut College.

“David has worked extremely hard to become our No. 1 runner,” Moore said. “He and four other members of our varsity squad attended a running camp this summer in Tahoe, where they ran at altitude and received personalized attention from high school and college coaches. One highlight was running on what remains of a track where the U.S. Olympic marathon trials were staged in 1968 to mirror conditions in Mexico City.”

Acuna, whom Moore nicknamed “Barracuna,” said he also learned how to eat and sleep better at the camp.

In fact, Acuna’s first big win of the season, in the juniors race at the Pacific Grove Invitational on the Monterey Peninsula on Oct. 12, saw his time of 17:17.94 better the runner-up from North Tahoe High by 21 seconds. More than a mile below their high school’s elevation, North Tahoe runners also grabbed the third, fourth and fifth spots.

“I felt a little more confident after that,” Acuna said.

Before that he had placed fifth at the first of four Vine Valley Athletic League meets.

“I talked to Coach Moore and he told me to go out harder and try to sustain it and not be too scared. I was being too conservative,” Acuna recalled. “He said to just go out fast and see what I could do, and it really worked.”

Acuna went on to take third in the second VVAL meet, at Napa’s Alston Park, then first in the final two – including the Nov. 16 championship race at Santa Rosa’s Spring Lake Regional Park, where he broke the course record.

He was named VVAL Runner of the Year.

Acuna started running one-mile races as an eighth-grader at Silverado Middle School. He had been playing soccer for Napa United and as a freshman, to get in shape for soccer, he tried cross country.

“I realized I really enjoyed running,” he said. “So after a year of cross country, I decided to take running more seriously and dropped soccer. It was a bit of a hard decision, but I love running. Cross country is and individual sport and team sport.”

“We all got really close because our team goal was to go to the state meet,” Acuna said. “Most of them are seniors, so we all came together and over summer worked really hard to have good season. We ran 60 miles a week over the summer, so they definitely played a huge part, pushing me. We really worked well together. They pushed the bar up and help me get better each day. They’re a great group of guys who are now my best friends.”

Moore said Acuna and several of the Grizzlies’ other varsity boys ran the state course at Woodward Park this summer. Their goal was to qualify as a team for state but came up just short. Needing a top-four finish, Napa placed seventh.

“Given the amount of work they put in, they took it real hard. But we are so proud of them,” Moore said. “They finished well ahead of where they did last year, against even stiffer competition this year.”

Acuna said his parents, Javier and Marina Acuna, were hoping he would follow in his brother Javier’s footsteps and stay with soccer.

“They were a little surprised because soccer is a big thing in my family, with my brother and other relatives playing it. But they’ve supported me for trying something new, which is really nice.”

Javier, a 2018 Napa High graduate now attending Chico State, was a three-year varsity soccer player for the Grizzlies. In his sophomore year, Napa went undefeated until it lost 1-0 to Oak Ridge in the Sac-Joaquin Section Division I semifinals. Their sister, Vanessa, did a year of cross country but was more into dance, David said.

David, who carries a 4.14 GPA, said he hopes to run for whatever college he attends.

“It’s been a joy coaching David this season and watching him progress to become the league’s top runner,” Moore said. “It took a while for him to believe he held the capacity to be that good. But once it clicked, there was no catching him.”

“We’re all jazzed for David and we’re looking forward to watching him compete against the best in California. The fact he’s made it this far is already a real accomplishment and sets him apart as one of the finest cross-country athletes in Napa High School’s long history.”

Acuna hopes to run his best race this weekend.

“I’m excited more than anything,” he said. “Right from the start, getting to state was my main goal, what I was working for, because of how big a deal it is. It’s been a dream of mine. All the work is paying off.”

The Crushers won their second straight VVAL title on Saturday thanks to having seven runners finish in the top ten, led by junior Mary Deeik.

The Napa High girls water polo team, seeded 10th in the North Coast Section Division 1 playoffs, advanced to the quarterfinals with a 10-8 ups…

Thanks for supporting student-athletes

Letters: Napa High Cross Country is on a roll.

Napa High junior David Acuna celebrates as he is about to cross the finish line to win the varsity boys race at the Vine Valley Athletic League Cross Country Championships on Nov. 16 at Spring Lake Park in Santa Rosa.

Napa High junior David Acuna is second in a pack during the North Coast Section Championships on Saturday at Hayward High.