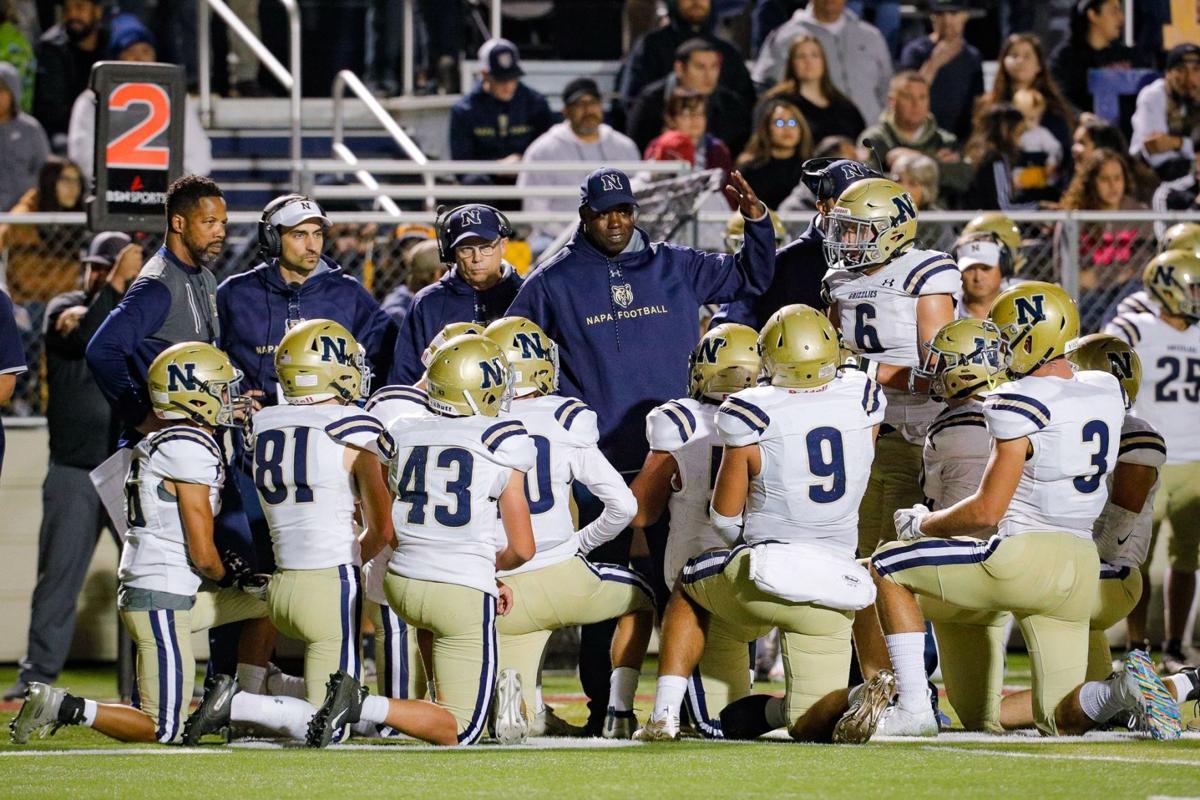 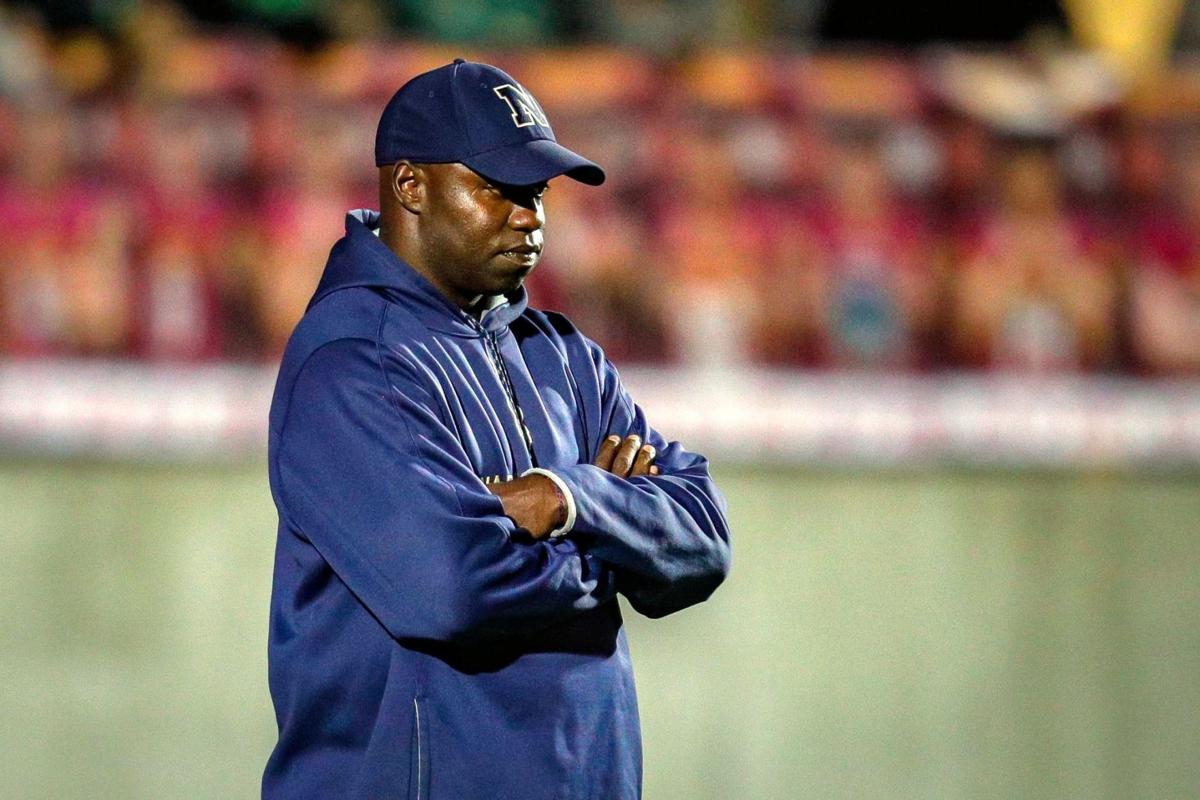 It took Askari Adams 12 coaching stops to be in charge of an established football team — and to want that much responsibility.

Principal Monica Ready said she made the announcement Monday night to students and families and that the hiring was pending approval by the Napa Valley Unified School District board, which meets Thursday night.

“Right now, we’re focused on the forward movement of the program; our conditioning starts today,” she said Wednesday morning. “We have a qualified coach in Coach Askari Adams. Given the turnover in our head coaching position for the past couple of years, I’m going to go slow and make sure we make the right decision (on a permanent head coach). Coach Adams definitely has the opportunity to participate in that process.

“We will go through an extensive recruitment process but given Coach Adams’ desire and willingness to step up, right now we’re just going to focus on conditioning and see how it goes. That (interim status) could change. He’s willing to stay on for the whole season and make sure that we find the best coach for our football players.

“I think in general it’s important to have your head football coach be on campus, but the teaching job is separate from the coaching job. Coach Adams is a teacher in our district, NVUSD, at Silverado Middle School and he’s going to stay on there for the time being. He brings continuity in this transition, and with that continuity our entire coaching staff is staying on with our program and returning this year to support Coach Adams and his leadership. They were out there yesterday getting ready for conditioning.”

Ready said Wessman is still teaching at Napa High and at this point plans to finish out the school year.

Adams’ family moved to Mechanicsburg, Pa., just outside Harrisburg, when he was 5. He starred in football at Cumberland Valley High School there and played safety for Penn State. After graduating with a kinesiology degree in 2000, he wanted to play professionally.

“It wasn’t what I expected,” he said of the XFL. “It was more about entertainment, like the WWF (World Wrestling Federation). I was a football player, not an entertainer.”

He then tried out for the BC Lions of the Canadian Football League but was cut.

“They could keep only so many American players, and the best player played my position and he as a U.S. guy,” Adams explained. “I was going to try Arena football after that, but I decided to get into coaching.”

His coaching resume has been like a whistle stop tour.

He started as an outside linebackers coach at Millersville University of Pennsylvania, a NCAA Division II school near Harrisburg. He then coached defensive backs for two years at D-II Mercyhurst University in Erie, Pa., where a lake-effect snowstorm helped change the course of his life.

“I was calling my mom the night before Thanksgiving and telling her I’d leave at 5 in the morning and be there (in New Jersey) in four hours. When I woke up, I was snowed in.”

Adams had had enough of the Keystone State.

He spent the next season as the defensive coordinator for Bullis School, a private high school in Maryland where his friend was the head coach. That wasn’t far enough south, so Adams moved on to serve as defensive backs coach and a physical education teacher at Gulf Coast High in Naples, Fla. When his teaching position was cut, he coached DBs at Golden Gate High in Naples.

Missing relatives in his native New Jersey, he coached DBs at Edison High there, before serving the same role at Carlisle High near Harrisburg, and then returning to Florida to coach DBs at Clay High near Gainesville.

The latter job happened after another head coach Adams was friends with had lured him to a different Gainesville area school. After coaching during spring workouts, Adams went with the team to a youth football camp at the University of Florida.

“Three or four days into the camp, he got fired,” Adams said of his friend. “The new coach didn’t want to hire me back, but luckily I made friends at the camp with the coaches from Clay High School.”

After serving as head coach at a new Florida high school, Adams took a two-year hiatus from coaching to teach middle school science.

Adams then decided he needed to go west. He coached DBs at East High in Denver, Colo. in 2017 and 2018, before coming to Napa last year. He now teaches special education at Silverado Middle School while coaching for the Grizzlies.

“When people ask me why I’ve moved around so much, I tell them how I moved to Pennsylvania when I was 5, I went to high school in Pennsylvania, I went to college in Pennsylvania, my first two coaching jobs were in Pennsylvania, and the only places I’d really traveled to were when we had (road) football games at Penn State — but I didn’t really get to see anything because we’d go to the hotel, wake up, play the game, and leave.

Even though he was a head coach in Florida for a year before heading west, Adams seems to look at this as his first job at the helm.

“So when this opportunity came, having never had aspirations of being a head coach, of course, I’m afraid because I don’t know everything there is to know. But I’ve been around great coaches and I took pieces from each coach I’ve been with, so I do have the knowledge to do it. I’ve been approached to be a head coach, but I just felt like this time was the perfect opportunity because we have great kids and a great coaching staff. I had the opportunity to be close to Coach Wessman and learn from him and it just felt like the natural thing to do.”

After two decades of moving from school to school after usually a year or two, Adams said he feels he’s finally found a home in Napa.

“It’s to a point where I want to settle down; I told Coach Wessman that when I got here (in July 2019),” he said. “My mom says the same thing: ‘When are you going to settle down?’ I don’t have any kids, I’m not married, so there’s nothing holding me back.”

In fact, he said that when he met with Ready on Monday afternoon and she offered him the position of interim head coach, he said he’d let her know in a couple of hours, and then closed the door and told her was interested in being the head coach for good.

“I don’t want to close the door on a long-term thing. But I’ll do as much as they ask me to do to help find a head coach,” he said.

“First and foremost, I love the kids. The kids are great. I mean, with what they had to go through learning a whole new system, offensively and defensively, and being able to pick it up and perform as well as they did is a tribute to just how eager and hungry these kids are. Right behind them are just the people here. They’ve been nothing but accepting of me with open arms, whether it’s parents, other coaches, the administration, people I’ve met around town — it’s just a welcoming place.

“I just want to say thank you to Mrs. Ready and Mrs. (Darci) Ward (athletic director) for this opportunity. They’ve been so helpful to me.”

He said all of the assistant coaches are staying on, too — another sign everybody wants the fun to continue.

“I’m not saying it all looked peachy in June (2019) when the kids were doing their spring ball and I was watching them from Colorado on Hudl,” Adams said of the website coaches use to share film. “I thought ‘We’re going to be in for a lon-n-n-n-ng year.’”

But a year after going 0-10 for the first time in over 60 years, the Grizzlies went 7-4 and made the playoffs.

“Three of the four games we lost, we had the lead at the end and we gave up points, and that’s what I’m (mad) about,” he said. “I put the blame on myself. Part of my growing pains.”

After teaching driver’s education, science and P.E., Adams enjoys being a special ed teacher so much he’s pursuing a graduate degree in it.

“He’ll switch you like he doesn’t even know you,” said Hernandez.

“You’ve got to earn it every week,” added Hatton. “Our coaches don’t really go off your talent. They go off the amount of effort you put into practices and if you know your assignments more than someone who has raw talent but doesn’t really care about the team. (Adams) likes to have things go right because he knows our potential as a defense. He’s seen us when we play together, so he knows what we can do and he doesn’t like it when we mess up or we don’t know an assignment that we’ve been practicing since summer.”

Ready, who was the head coach of the Napa High girls tennis program from 2004 to 2009, thinks Adams can thrive at the football helm.

“Coach Wessman was able to set a foundation for the culture and success in our program and Coach Adams was a part of that, so I know that his focus on character and culture and performance will serve our students well.”Watch Now: Tips to get motivated for exercise.

Tips to Get Motivated for Exercise

Editor’s Note: Times like these bring out the reflective side as the world attempts to recover from the COVID-19 pandemic and postponed Califo…