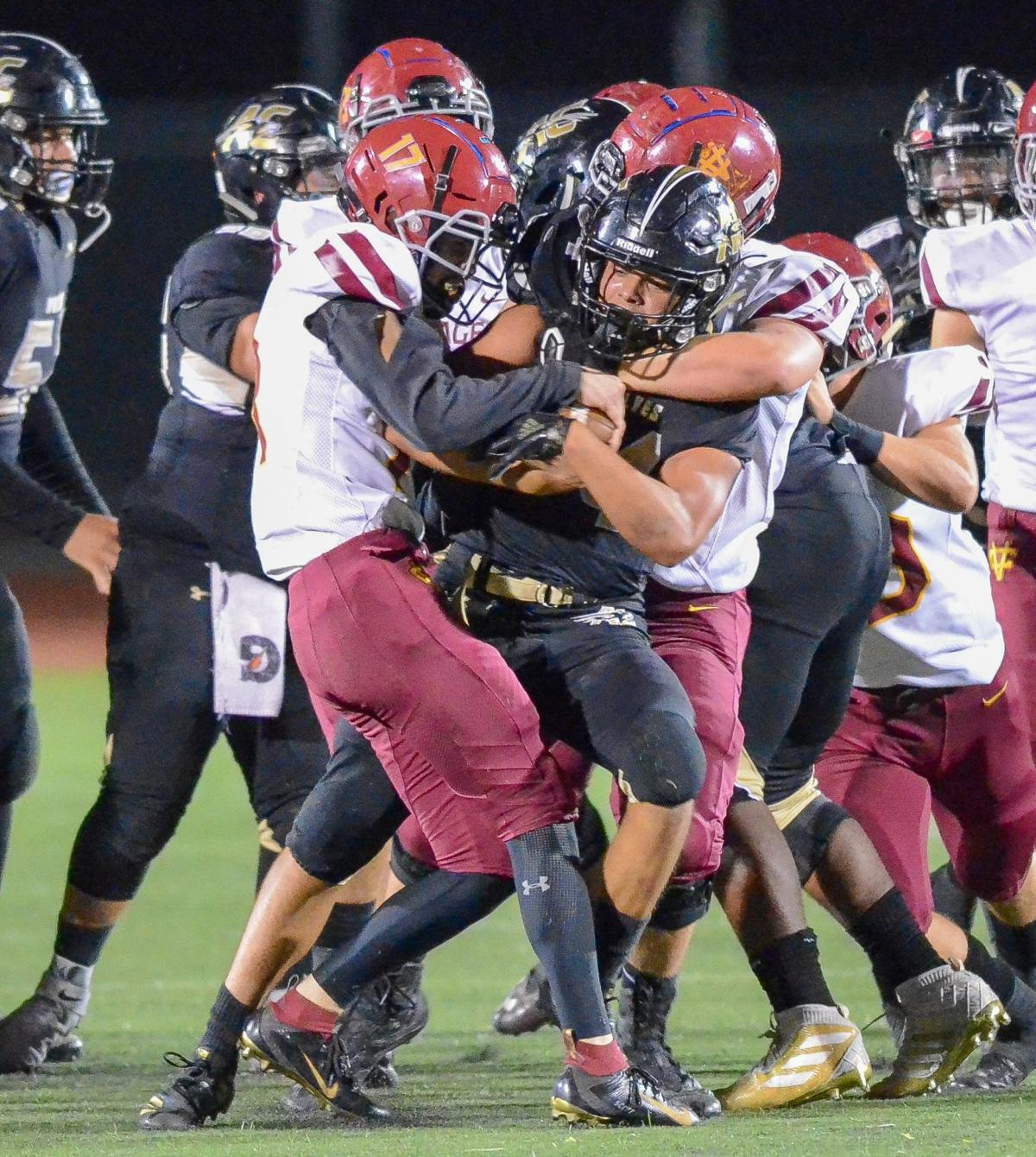 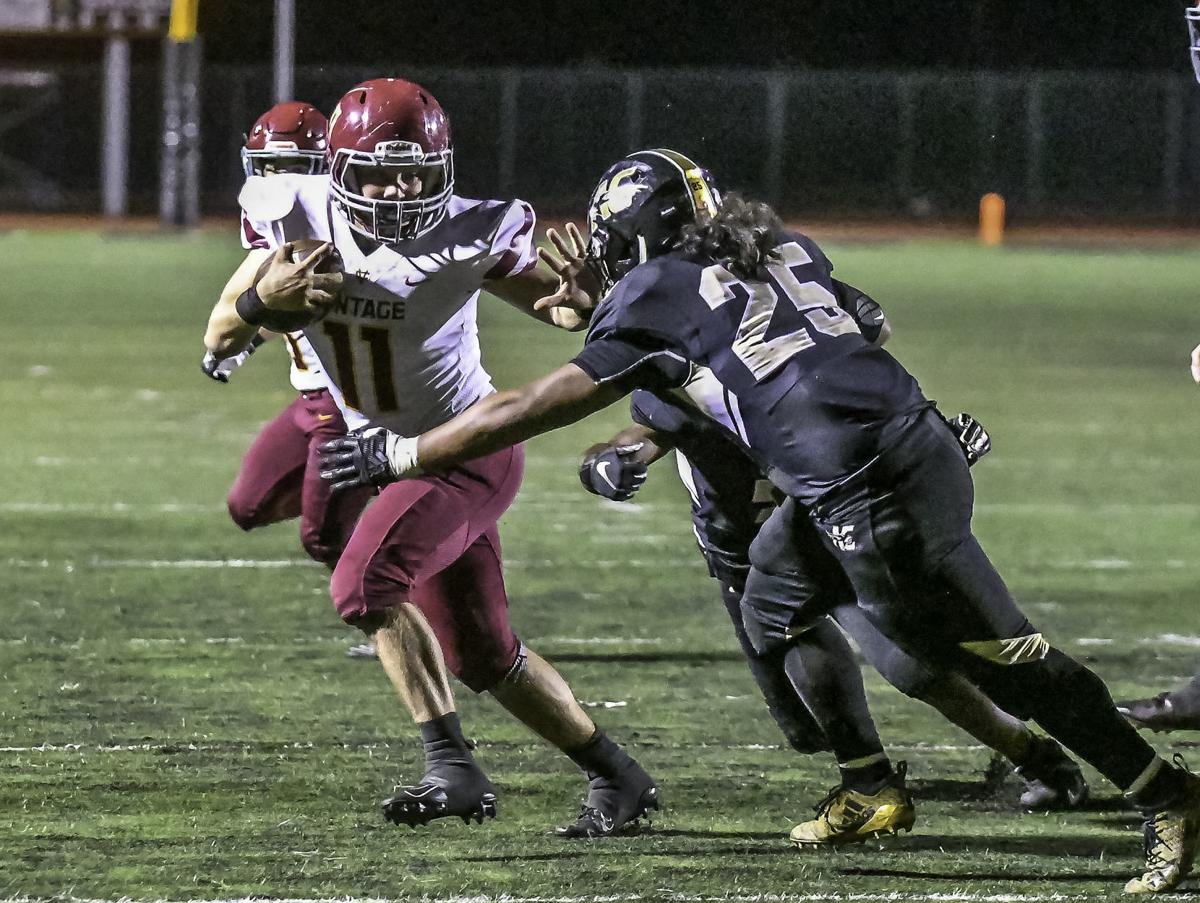 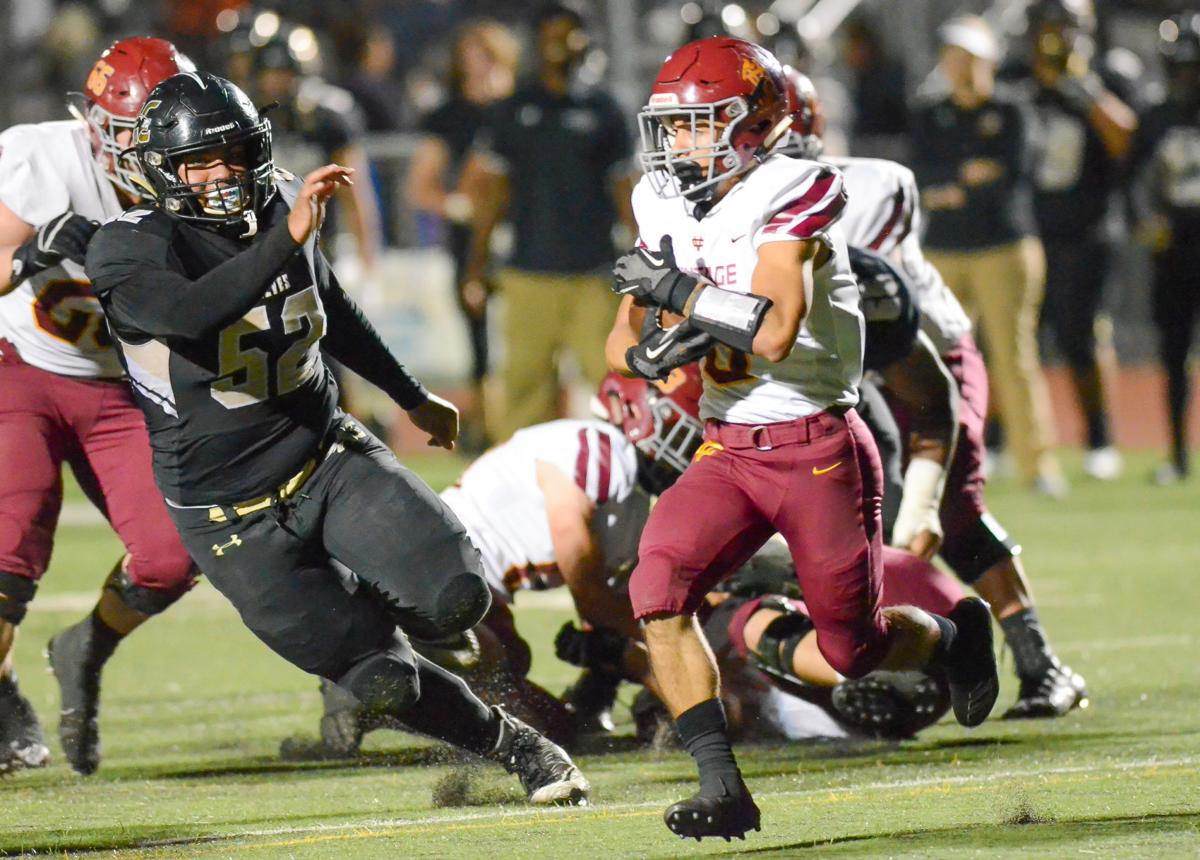 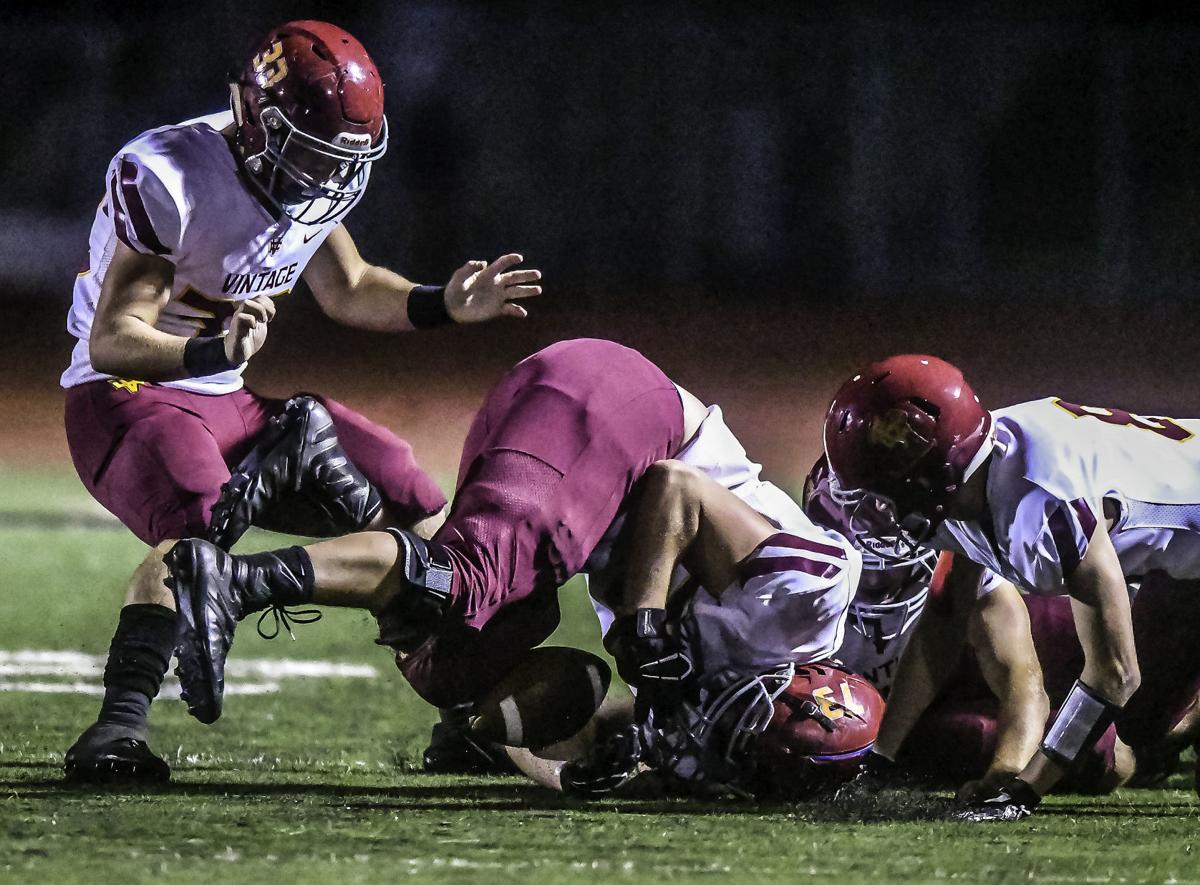 Vintage's Dominic Smith (73) recovers an American Canyon fumble on the first play of the second half Friday night. 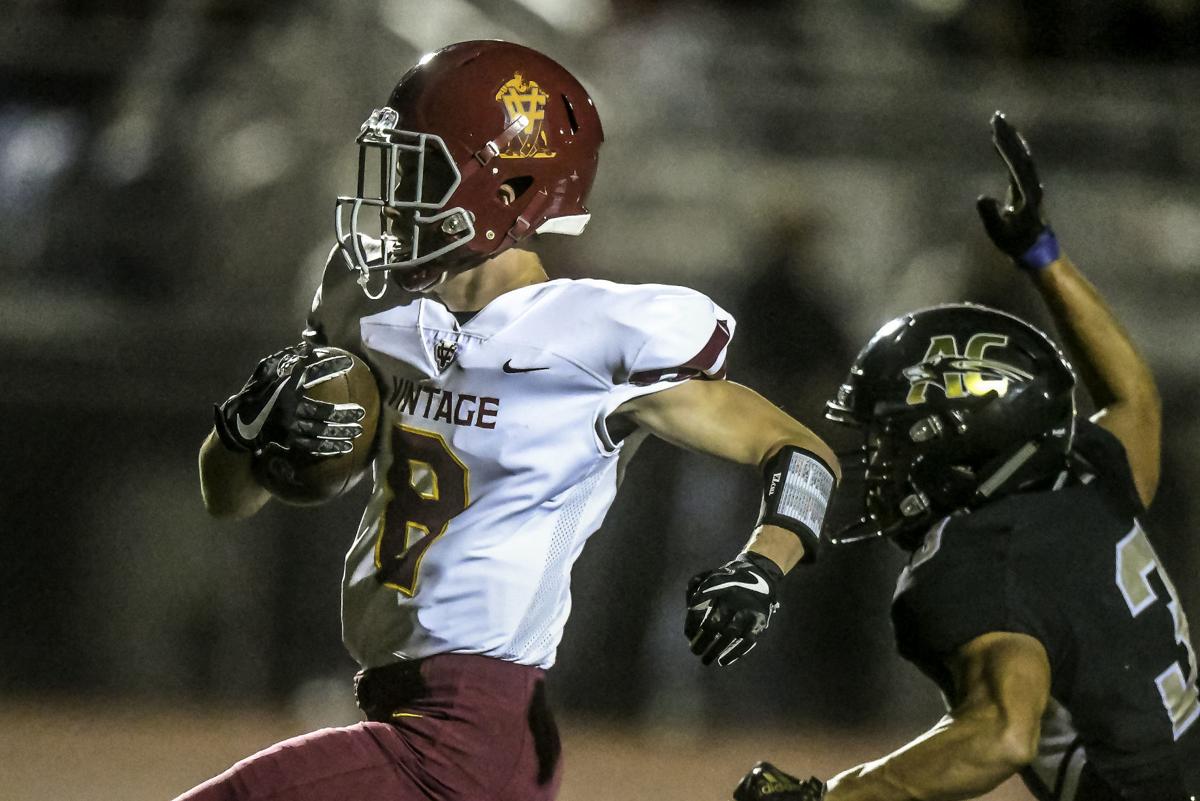 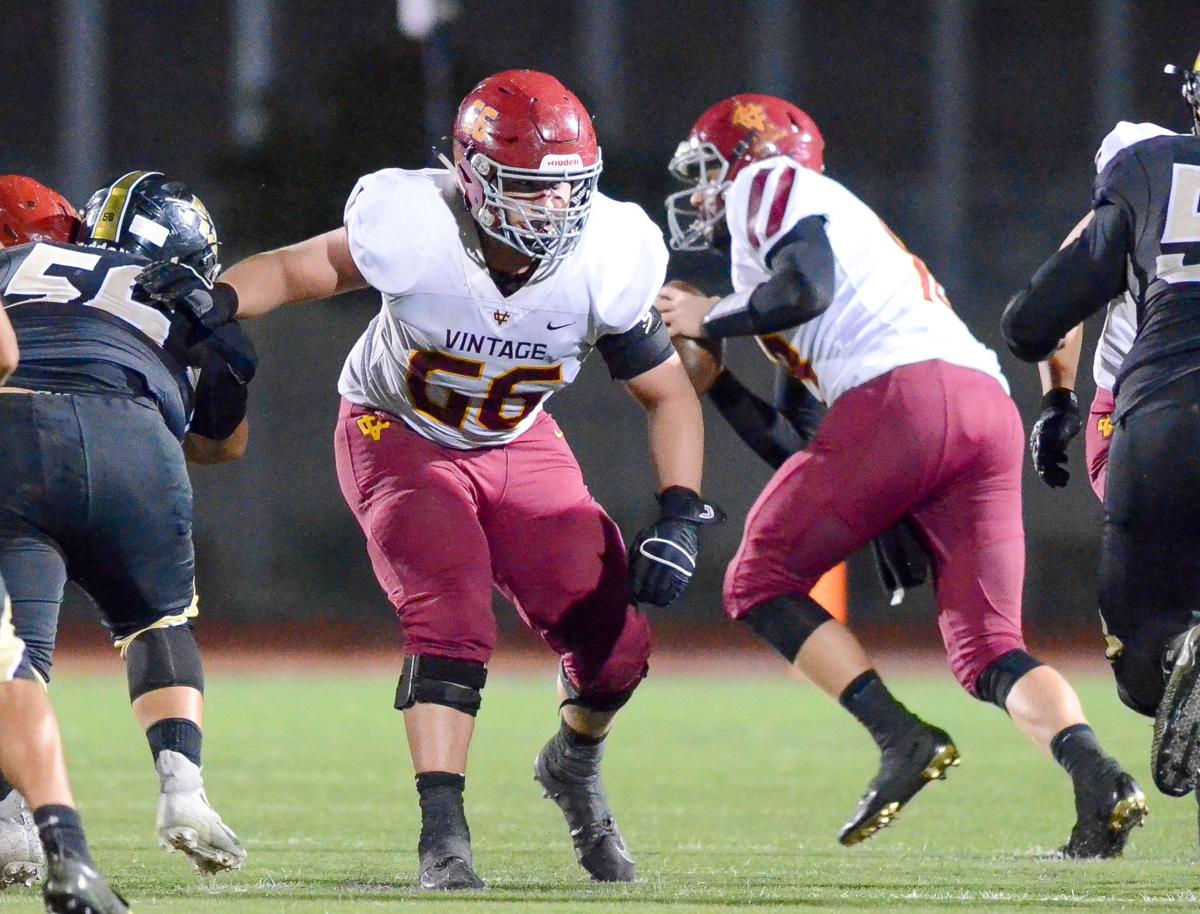 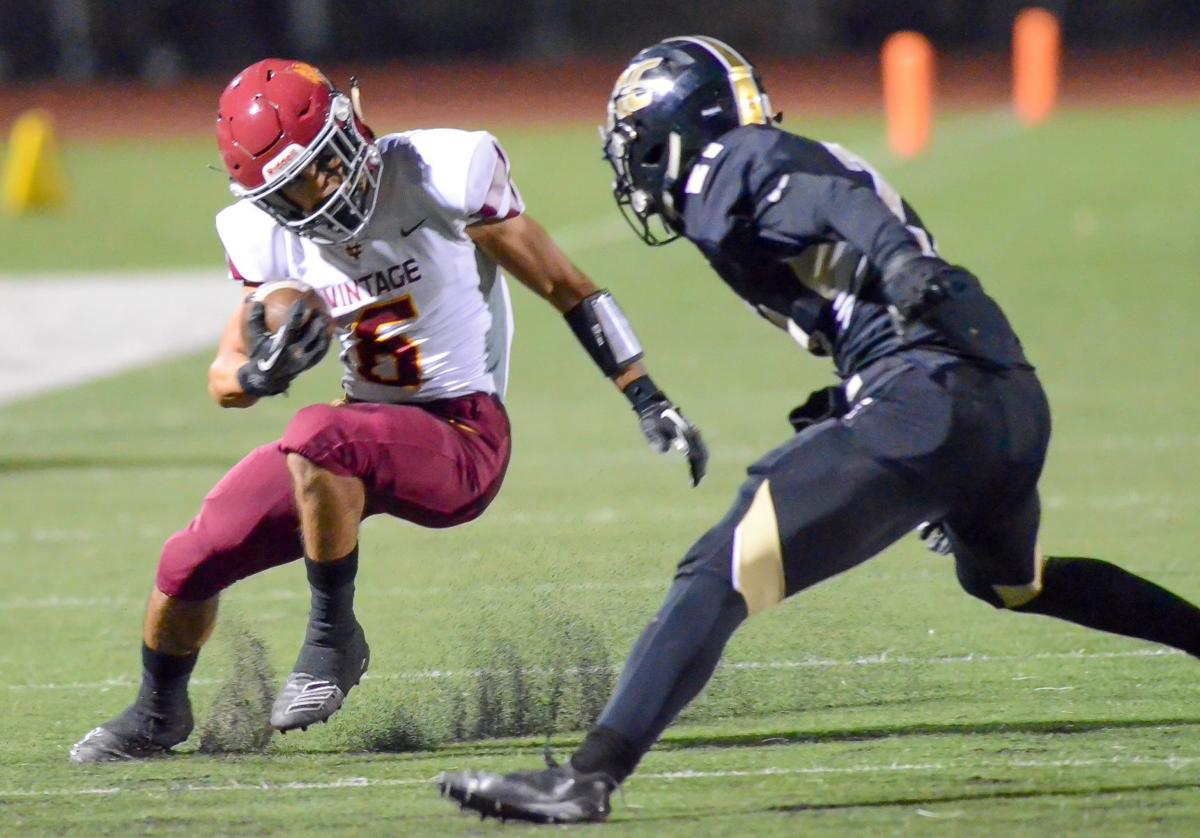 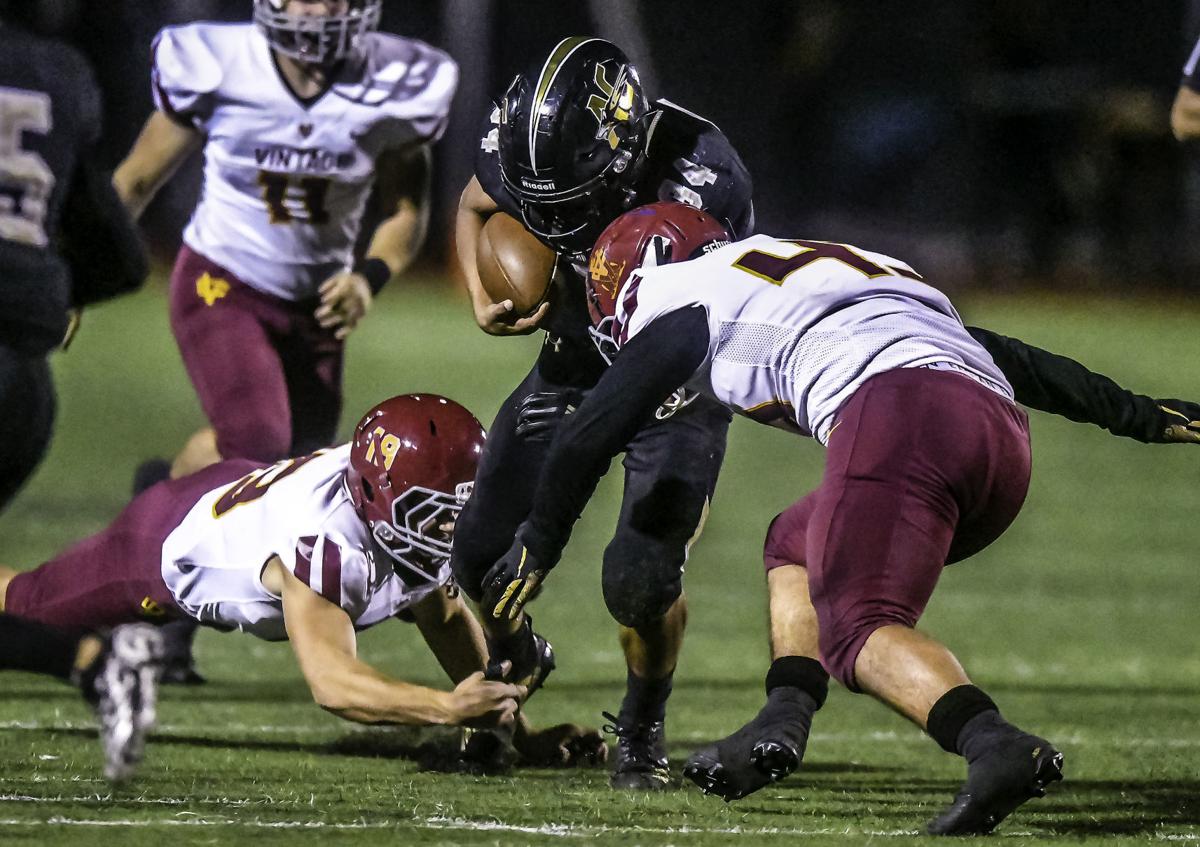 Vintage's Dominic Smith (73) recovers an American Canyon fumble on the first play of the second half Friday night.

AMERICAN CANYON — Last year’s top two Vine Valley Athletic League football teams duked it out like prizefighters in the first half Friday night, faking each other out once and using several small blows or one big blow to score again.

Tied at halftime, the game came down to which team would make fewer mistakes in the second half. That would be Vintage, which parlayed two American Canyon fumbles into third-quarter touchdowns en route to a 28-14 win before a huge crowd at Wolf Den Stadium.

The Crushers (6-1, 3-0 VVAL) didn’t let the Wolves answer after American Canyon blocked a 20-yard field goal attempt and Ronald Hamilton returned it to the Vintage 43-yard line with 5:16 left.

Wolves quarterback Vance Eschenburg, on top of his game in the first half despite missing the second half of the previous week’s 14-7 road win over Napa High due to injury, went to the air 10 times during the ensuing 11-play drive. But after hitting favorite target Justin Del Rosario for a first-down at the Vintage 19, and James Larson on a screen to the 11, the senior threw his third straight incompletion on fourth down while being hurried by defensive end Bryer Scott.

After Vintage went three and out, Scott ended the game with his third sack of the night.

“Honestly, I couldn’t do it without my teammates; they’re a big part of it,” Scott said. “But it’s easy getting quick, getting off that edge. A quick juke and getting skinny will get you there.”

Having had four sacks against Casa Grande two weeks before, he was asked if he expects to be multiple-teamed by linemen before long.

“Yeah, maybe, but we’ll watch film and come up with a counter for that,” he said. “We knew it was going to be a tough fight. We had to come out and put our best game on. We’ve been prepping for this for a while. They’re a tough team. It was a fist fight out there. But now we know after beating them, we can take league. We got this.”

After improving to 9-0 across two VVAL campaigns, how do the Crushers not get overconfident?

American Canyon had the early momentum after forcing Vintage quarterback Jacob Aaron to throw incomplete at the end of a game-opening 12-play drive. Eight plays later, after converting on fourth down by faking a punt, Eschenburg found Del Rosario with a 44-yard pass at the Vintage 1 and ran it in on the next play. Del Rosario hit the extra point for a 7-0 lead with 1:38 left in the first quarter.

“We were running a cover-3 and I saw their No. 2 coming across the middle and my other safety, Vinnie Espejo, did a good job of jamming him and it threw off his timing,” Fisher said.

It was only Aaron’s fourth interception of the season.

“I’ve made a couple of mistakes with picks this year, but you’ve just got to shake it off,” he said. “I knew we were a really good second-quarter team, so I knew we were going to get it back.”

Vintage’s defense forced a three-and-out and its offense tied the game with a 10-play, 87-yard scoring drive. Runs by Castro and Aaron got the Crushers into American Canyon territory, and Aaron capped it with a 45-yard touchdown pass to Cutler Low with 6:09 left in the half.

Ian Avalos and Scott stopped Eschenburg on keepers to force another quick punt, and Vintage head coach Dylan Leach reached into his weekly bag of trick plays. Aaron handed off to Castro, drawing defenders before he pitched back to Aaron. The completed the flea-flicker by finding Low loosely covered across the middle for a 41-yard touchdown strike. Tate Salese’s second extra point made it 14-7.

“I knew it was going to work because Cutler’s a great route runner and I got some time. It was a great catch, too,” Aaron said. “It’s really hard to defend, especially with all the other stuff that our normal offense has.”

“Our line has been absolutely unbelievable,” he said. “They’ve really stepped it up. It’s awesome.”

Eschenburg bounced back from a Scott sack on the next play to fashion a game-tying, 11-play, 71-yard scoring march for American Canyon (7-1, 3-1 VVAL). He found Gaviola for 18 yards and Anderson for 11 to help set up a 20-yard scoring strike to Del Rosario, who added the PAT to tie it at 14-all with 30 seconds left in the half.

The Wolves got the ball to start the second half but a fumbled pitch was recovered by Vintage’s Dylan Smith at the American Canyon 16. Six plays later, Pedja Zivkovic punched it in from the 1 for a 21-14 lead.

A fumble three plays into the Wolves’ ensuing drive was recovered by Bill Chaidez at the Vintage 39. Aided by a 15-yard unsportsmanlike conduct penalty against American Canyon, the Crushers scored 10 plays later on a 13-yard Zivkovic scamper. With 2:42 left in the third, the scoring was done for the night.

The Wolves continued to unravel. Facing fourth down and 5 at the Vintage 38, they went for it, but the shotgun snap sailed over Eschenburg’s head and he had to fall on it at his own 43. That led to the blocked field goal and anticlimactic finish.

“We’ve got to learn from these lessons. Boneheaded mistakes in championship football doesn’t get you very far,” American Canyon head coach John Montante said. “It’s a good thing we’ve got a bye next week because we’re going to get some of this stuff right. It’s not a maybe. We’re going to do it. Everybody made their own degree of boneheaded mistakes tonight. You can’t let a team that’s good off the hook. Now we’ll learn from it.”

Vintage was forced to kick the late field goal after a trick play did not result in a touchdown for the first time all season. On the hook and lateral play, Billy Birdsall caught a 13-yard Aaron pass at the 20 and handed off to a sprinting Low, who was tackled at the 5. Kekoa Wilson stopped Castro for a loss on third down to force the kick.

Fisher, while happy to get his team-high fourth interception, felt his team was caught sleeping overall.

“I feel like we could have played a lot sharper. We gave them a few things that we shouldn’t have, and they’re a good team. I can’t ever take that away from them. They’re very sharp, a very sharp team, and they do the little things right. They did the little things more than we did, and they made fewer mistakes and that’s why they came out with the win. Going forward, we know we can’t be complacent and that this should be a wake-up call. We’ll be ready after the bye week (for visiting Casa Grande).”