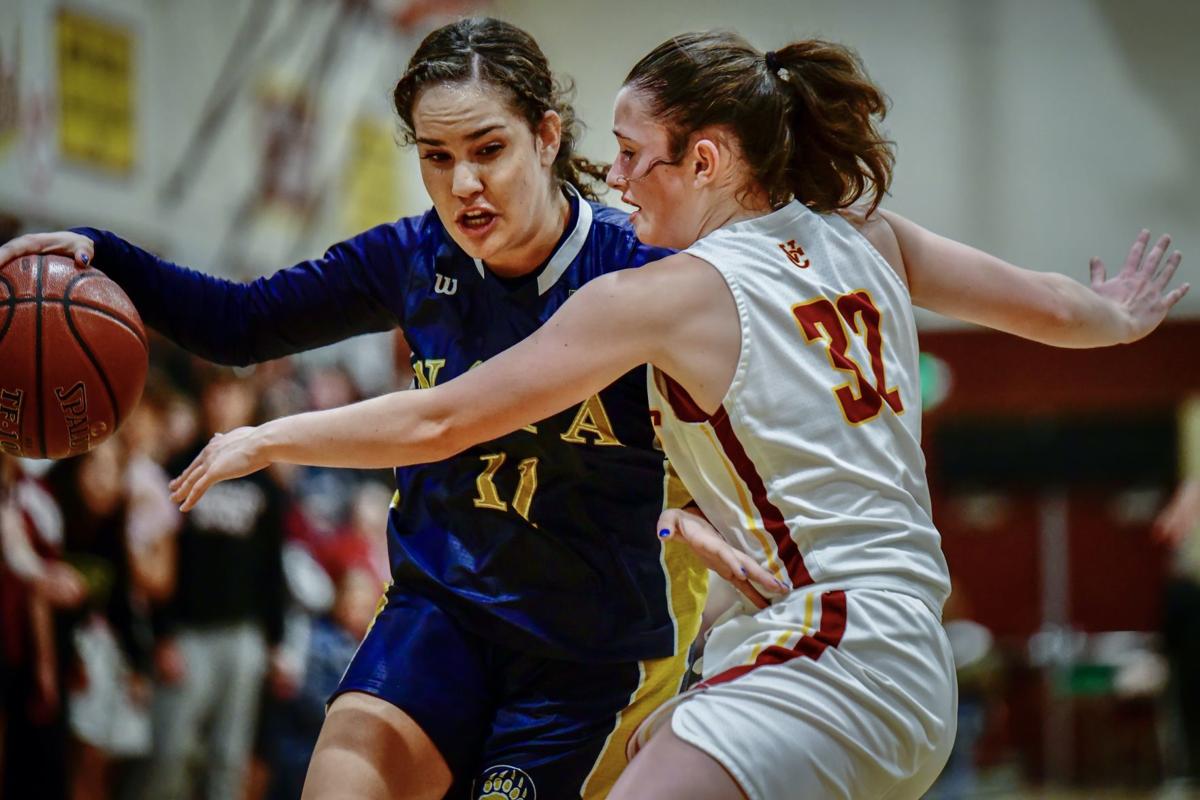 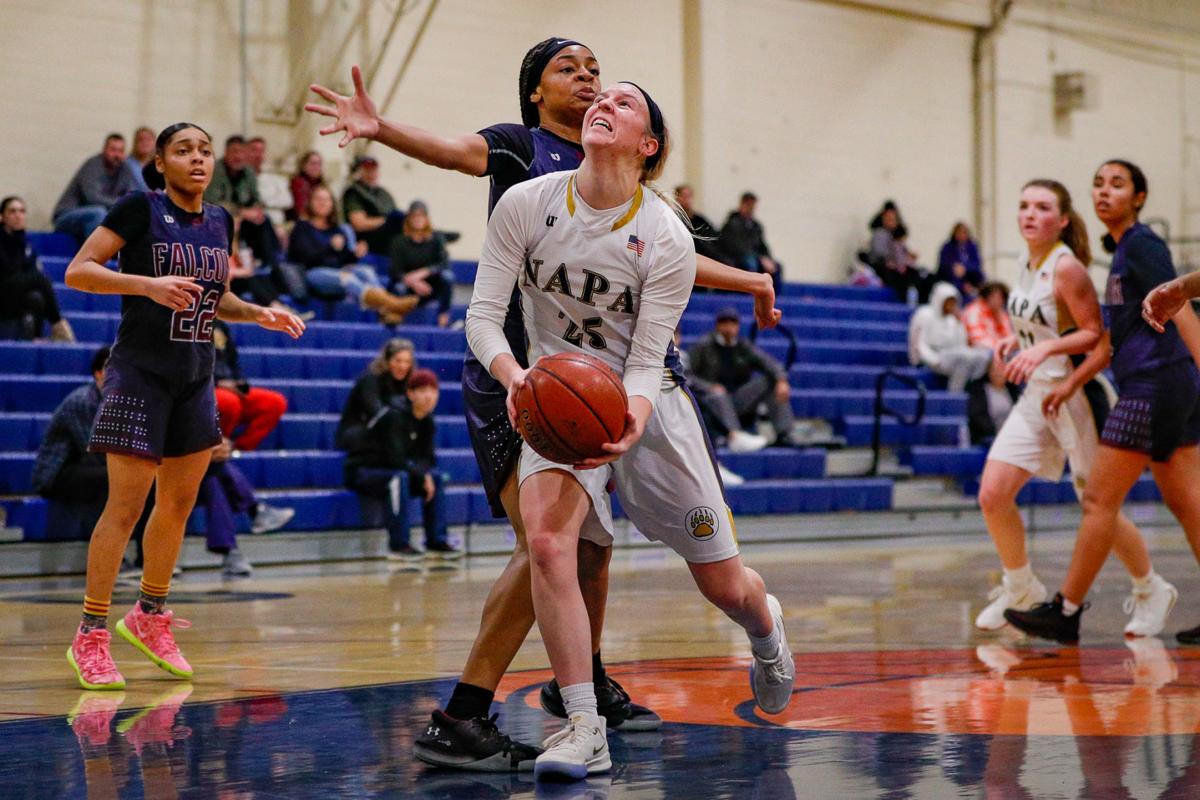 Napa High's Anna Ghisletta drives for a layup against Freedom during the Wine Valley Tournament in December. 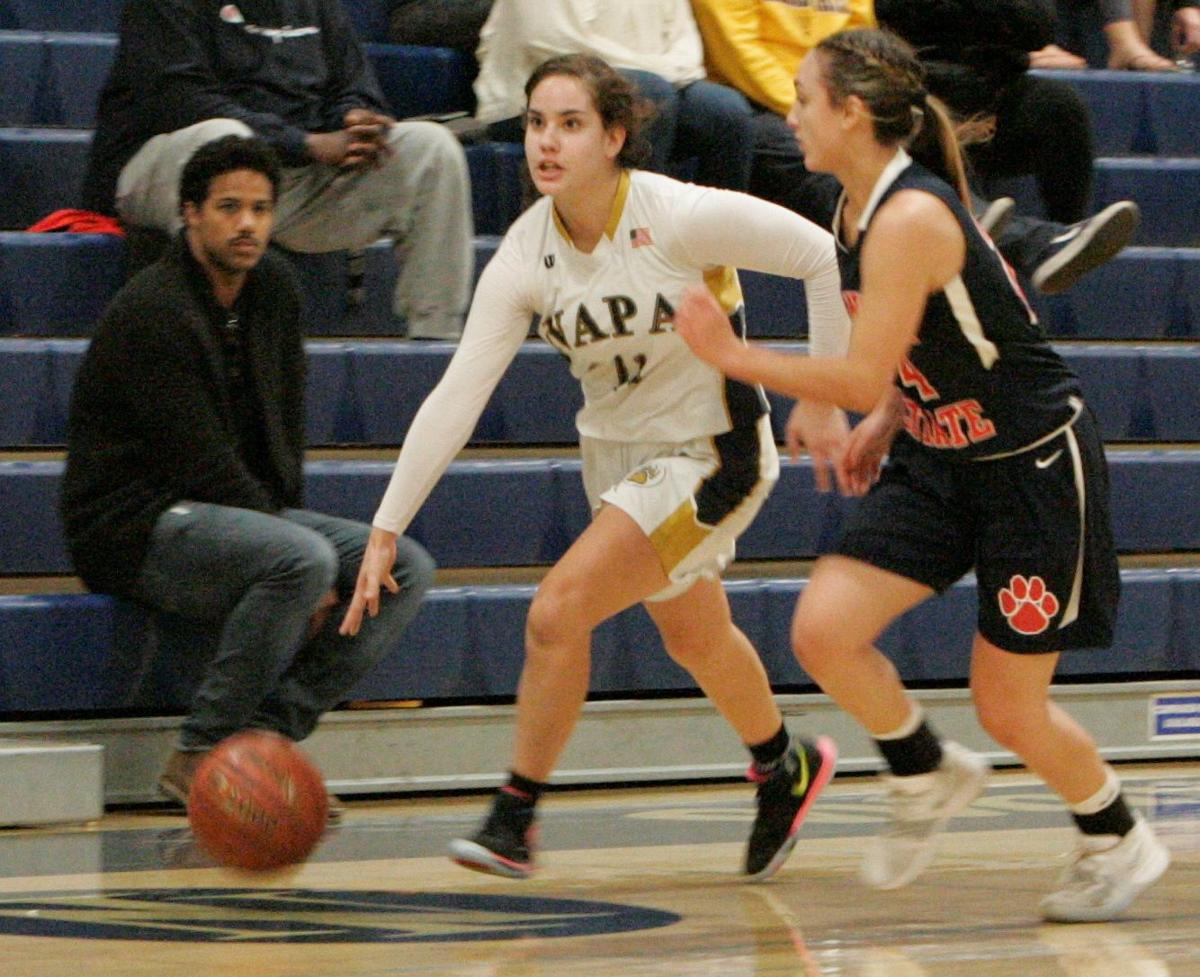 With her brother Marcus looking on at left, Napa High's Maizy Armstrong-Brown brings the ball upcourt against Rancho Cotate during the Wine Valley Tournament in December. 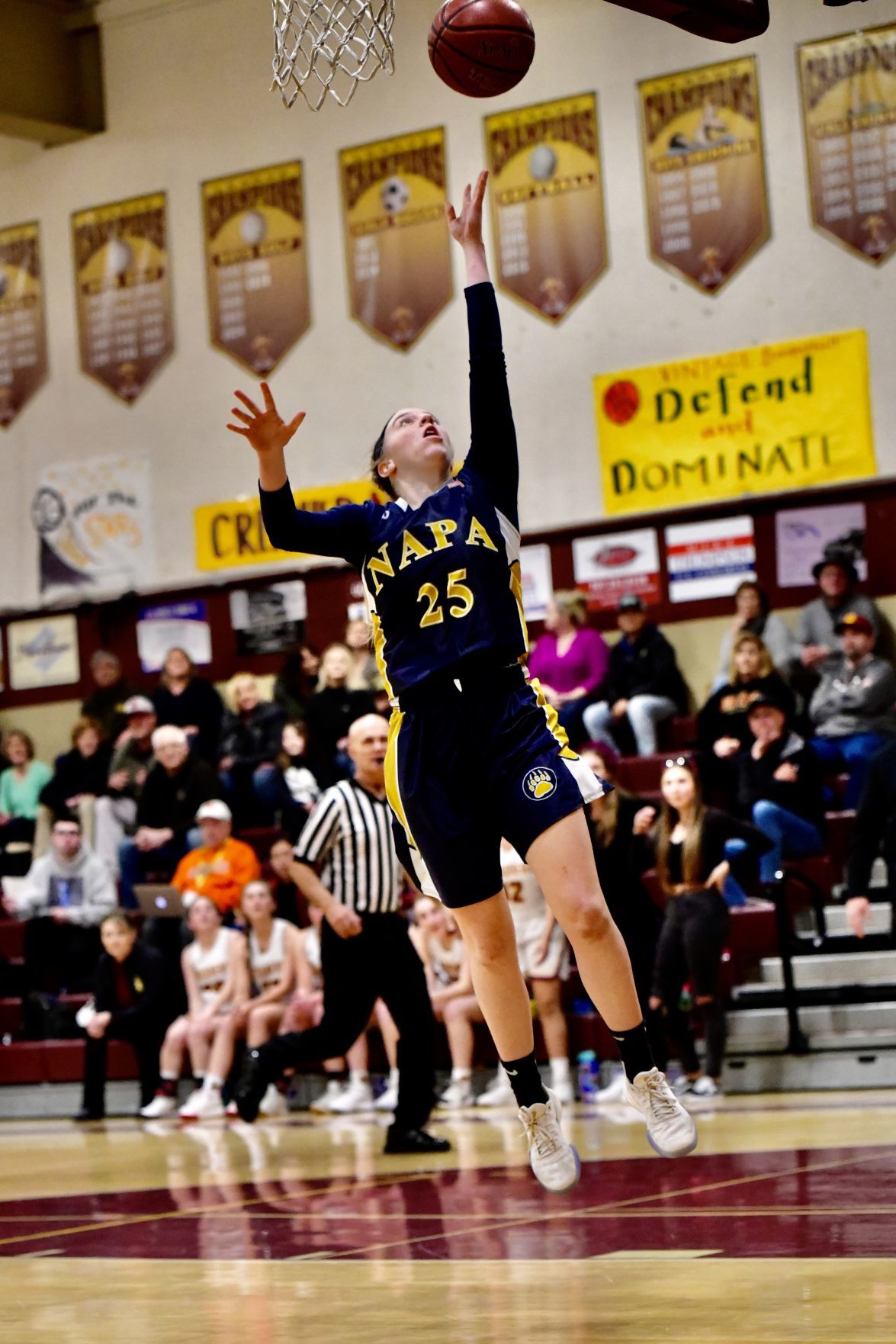 It should be no surprise that Anna Ghisletta leads the Napa High girls basketball team in scoring, nor that the Grizzlies’ eighth-youngest player is right behind her.

Ghisletta, the team’s only fourth-year varsity player, averages just 10.4 points per game but has been very consistent, scoring in double figures in 13 of 21 games. She also gets 3.3 rebounds a game.

Maizy Armstrong-Brown, a junior in her second varsity season, is next at 7.0 points per game with five double-digit games, including a season-high 21 in a win over McKinleyville at the Windsor tournament. She also shared the team rebounding lead with sophomore Sofia Tinnon at 5.0 a night.

The pair will lead the Vine Valley Athletic League’s second-place Grizzlies (12-11, 6-3 VVAL) into their second Big Game against visiting crosstown rival Vintage (8-14, 3-6 VVAL) on Thursday. They were to gear up Tuesday night when Vintage hosted Sonoma Valley while Napa traveled to American Canyon.

They have been pleasures for first-year varsity head coach Taylor Willis and assistant coach Adam Martinez to coach.

“Anna and Maizy both have passion and love for the game, and they both put a substantial amount of work in throughout their careers in order to be offensive threats, as well as lead and control the tempo of the game,” Willis said. “In the offseason, they not only worked to add new offensive skills but also both improved greatly on defense. Anna leads our team in steals (3.3 per game) and Maizy in defensive rebounds (4.1).

“They bring so much more than just scoring ability. Anna leads with her heart and effort on both ends of the court, and Maizy has a natural IQ and understanding of the game. That combo has led us to some great wins as well as helped bring us closer as a team.”

Players like Ghisletta who wear headbands these days are usually gym rats, though she also ran cross country with hoop teammate Grace Sedgley this fall.

“I have worked with Anna since her freshman year and the transformation to her senior year has been incredible to watch,” Willis said. “Anna has really stepped up into this leader role and her confidence and energy have been a huge spark for us throughout the season. We’re really going to miss her passion, silliness and competitiveness – and, of course, her dance moves.”

Ghisletta is such a gym rat, she even works at HealthQuest Fitness Center once or twice a week and on weekends. “I want to travel a lot, so I’m saving up,” she said.

Like most of their teammates, the two grew up wanting to play for Darci Ward and Michelle Lewis. But Willis played for one of their best teams as a senior in 2009-10, a 25-3 squad that went 10-0 in league play and won a playoff game, and continued her career at UC Santa Cruz. When she and her husband took over for Ward and Lewis this season, Ghisletta and Armstrong-Brown didn’t any transition pains at the top.

“It wasn’t that bad of a transition because Taylor coached (the junior varsity) under Darci,” Armstrong-Brown said. “It was different just in terms of how many girls came up to varsity and how many girls were already there. That was the biggest transition we all had. At the beginning, the chemistry wasn’t there. Me and the seniors had chemistry, the juniors had chemistry, and we were all on the court at different times, so that was the hardest part.”

Like Ghisletta and Sedgley, others also came to the team late from fall sports – Sophia Mostow and Julie Solomon from tennis, and Armstrong-Brown and Devan Wickersham from golf.

“We’re senior-oriented because four of the juniors and our sophomore all played on JV last year, so we mixed things up more,” Ghisletta said. “It was hard at first. Everybody likes each other, but we had to learn how players play.”

These Grizzlies have already matched the league wins of last year’s team (15-12, 6-6 VVAL).

“It’s different,” Ghisletta said, “but it’s positive and fun and something new. I’ve had fun every year, but it’s nice being on the winning end more after a really hard preseason. Taylor has put a lot of time into it, too. She’s committed to it. She made our team room really nice, decorating it. She’s very on top of everything.”

Willis last coached Armstrong-Brown on a North Bay Basketball Academy AAU team last year, but the coach – currently a substitute teacher – is about more than basketball.

“She has us prepared for games and is always checking up on us, making sure we’re always in line,” Armstrong-Brown said. “She won’t let us play if we have an ‘F.’ She really wants us to be actual student-athletes.”

“When we tried out, we had to get a paper signed by our teachers about how we are in class and what our grades were at the time,” Ghisletta said. “She took us to UC Santa Cruz for a visit, too, the second week of January. We went to a practice and met their coach and watched them play the next day. All of her coaches are still there.

“I’d already applied to all my colleges, but I really liked that campus so I was kinda bummed that I didn’t apply there. I really liked it. It was pretty.”

Ghisletta wants to major in sports management and has applied to large schools such as Clemson and Tennessee, but she’s also open to playing for Napa Valley College or walking on at Chico State.

“I’m the Rallies Commissioner at Napa High, so I’ve been planning a lot of stuff and I really like that,” she said. “Sports have always been a part of my life and I can’t imagine being done with it. I would definitely enjoy a job where I can organize and plan things revolving around sports.”

Both are little sisters of quarterbacks. Ghisletta’s brother Troy was the back-up signal caller during his 2018 senior season at Vintage. Their mother, Lisa, played basketball for Napa High.

Armstrong-Brown’s oldest brother, Marcus, was a quarterback at Justin-Siena, but went on to star as a wide receiver at Diablo Valley College and the University of Hawaii. Her other brother was on the cheer team and set school diving records at Justin-Siena and now attends Saint Mary’s College, where he also works as a lifeguard. Their father, Anthony, is a Napa High football assistant coach who used to coach JV football at Justin-Siena. He starred at Novato High and Boise State and made the Green Bay Packers’ practice squad.

It’s all led the youngest member of the family to want to major in sports psychology after she graduates in 2021.

“I want to continue playing basketball as long as I can. I love basketball with all my heart,” Maizy said. “I also want to work with athletes and help them with their mindsets. I’ve had hard times with basketball and had to work on my mindset, and I want to help athletes be great.

“My dad likes to sit in the front row and talk to me during every free throw and when I’m on defense, saying ‘Hands up, get low.’ My dad is definitely a big part of my basketball life, and so is Marcus. Since I was little, both of them have always helped me through basketball. Marcus watches all my Hudl videos even though he’s in Hawaii. They love basketball, though they wish I would have played football, too.”

The two attribute the Grizzlies’ league success to a tough preseason, the more memorable opponents being Martinez’s alma mater, Granada of Livermore, and Freedom of Oakley in a Wine Valley Tournament semifinal.

Ghisletta had her season scoring high in a loss to Petaluma.

“We didn’t play very well, but hopefully we can get them on our Senior Night,” she said of the third-place Trojans.

Despite losing 50-36 to Freedom’s athletic squad, it showed the Grizzlies they could hang with a good team.

“Along with our mindset, I think our energy was really good that game,” Armstrong-Brown said. “We started off down and we would come back and start to chip away and then our bench would be getting loud and we’d start hitting shots and that’s when our energy started to flow. Sometimes it doesn’t turn out the way we want it to, but as long we have energy and work together, that’s all we can ever ask for. If we do that, even if we do lose, I wouldn’t be mad.”

With only three league games left, and no guarantee of making the playoffs yet, Ghisletta is starting to sense the end of her career might be near.

“I’ve been coming to games since I was super young because I’ve had family friends in the program and I noticed that this program is a lot different from others,” she said. “It’s not just basketball. You become a family. Taylor and Adam have made it fun. She’s all about hustle and working hard and rising to our potential. If we lose a game but we play to our potential, she’s never upset with us. She’s disappointed if we lose and she knows we could have done better.”

Added Armstrong-Brown, “She’s hard when she needs to be hard, she’s nice when everything’s going good. She will get on you when she needs to, or be there for you when your head’s not right. She’s just an all-around good coach. We have practice or games six days a week. We haven’t had one Saturday off. We did get the Friday off after Big Game. But she wants us to work hard, she wants us to be committed.”

The Vintage High girls basketball team salvaged a split in the Big Game series this season, beating Napa 45-42 on the road Thursday night.

Napa High's Anna Ghisletta drives for a layup against Freedom during the Wine Valley Tournament in December.

With her brother Marcus looking on at left, Napa High's Maizy Armstrong-Brown brings the ball upcourt against Rancho Cotate during the Wine Valley Tournament in December.