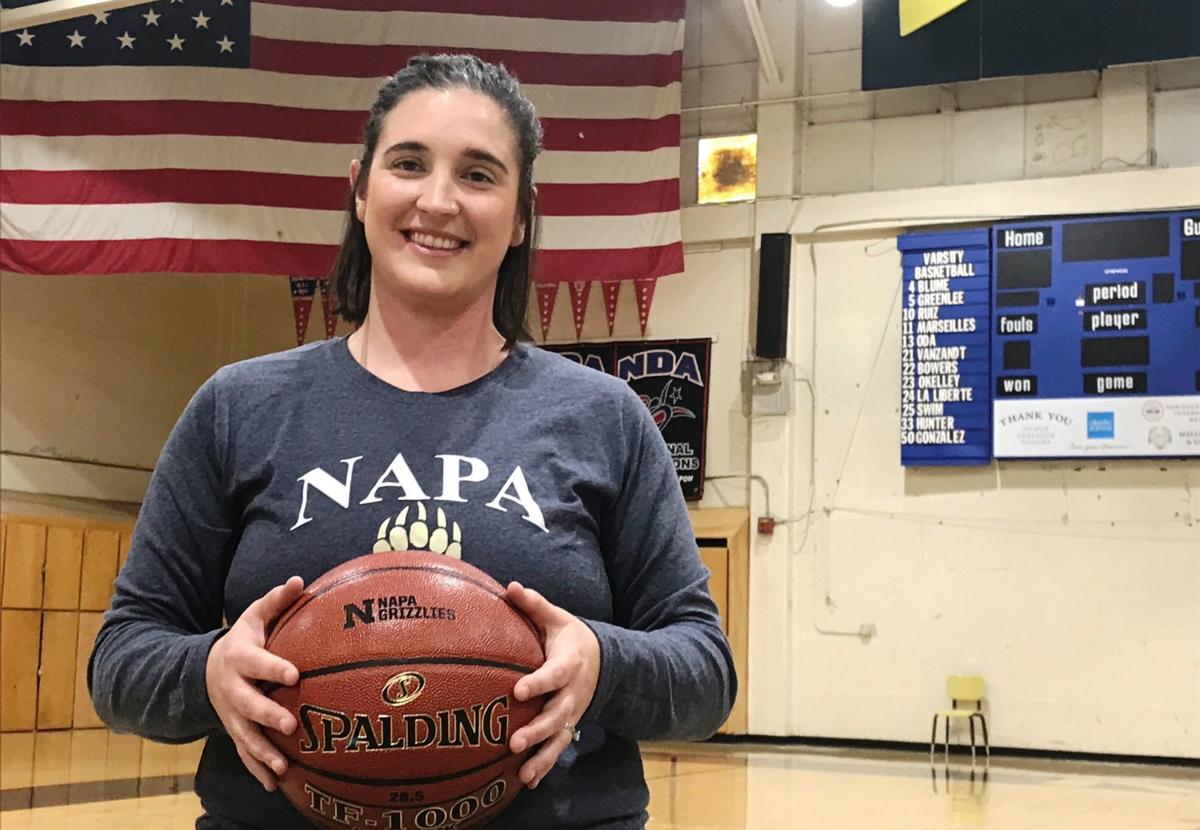 Taylor Willis, who helped the Napa High girls basketball team go 25-3 during her 2009-10 senior year and went on to play for UC Santa Cruz, is the Grizzlies' new head coach. 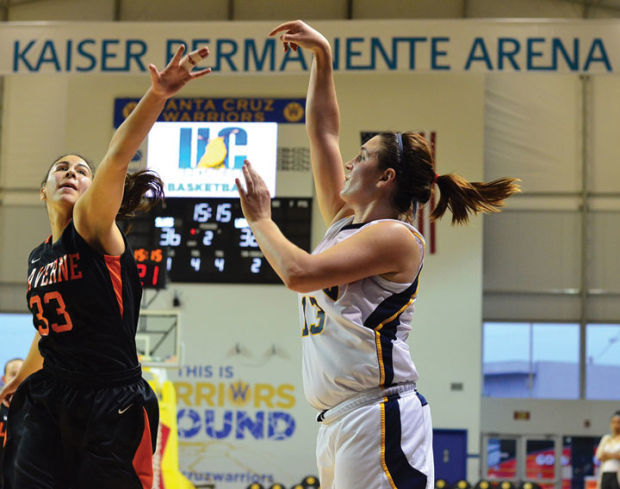 Taylor Willis, right, shoots for UC Santa Cruz against the University of La Verne during her college basketball career.

Taylor Willis never gave much thought to becoming a basketball coach one day.

All of that changed when one of her former coaches, Napa High School’s Darci Ward, gave Willis the opportunity to join the staff of the girls’ basketball program as a coach.

After playing four years – three as a starter at guard – for UC Santa Cruz and being named to the 2014 All-Independent Women’s Basketball Team for the Banana Slugs as a senior, Willis returned to her hometown and went to work at her alma mater.

“From there, I never wanted to look back,” Willis said Wednesday. “I’ve always loved basketball. I missed it when I stopped playing. Basketball is my passion.”

Willis, a 2010 Napa High graduate, recently took over as the Grizzlies’ head coach after Ward resigned from the post after 16 years in March to spend more time with her family. Longtime Grizzlies assistant coach Michelle Lewis, Ward’s sister, also stepped down.

Willis received a degree in film and digital media from UC Santa Cruz and is pursuing a state teaching credential from Sonoma State. She is a substitute teacher.

“Taylor brings continuity to our program. She’s a former player,” said Ready. “I think Taylor will position Napa High to continue to have success as a basketball program, not just on the court, but also academic success. We’ve had both for a long time, and I know she’ll carry on that tradition.

“I’m excited that Taylor has that history, but she also has a desire to leave her own mark, to grow our players, and to take it to the next level. I look forward to seeing what Taylor brings to our program.”

Willis takes over for one of the top coaches in the North Bay. Willis was an assistant varsity coach under Ward for two seasons, from 2016-2018. Willis was the Grizzlies’ junior varsity coach this past season.

Ward, Napa’s coach since 2003, guided the Grizzlies to nine Monticello Empire League championships and has a 295-149 record, a career highlighted by many CIF Sac-Joaquin Section playoff appearances. Napa went 122-38 in the MEL with Ward directing the program.

In their first year as a member of the new Vine Valley Athletic League, the Grizzlies were 15-12 overall and 6-6 with a third-place finish in the VVAL, part of the CIF North Coast Section.

Ward will continue as Napa’s co-athletic director. She also teaches P.E. and health along with AVID (Advancement Via Individual Determination). Ward is a 1995 Napa High graduate and was inducted into the school’s Athletic Hall of Fame in 2010. She was a four-sport athlete, in tennis, basketball, cross country, and track and field.

“I’m so honored to be taking over the Napa program, because I loved playing here,” Willis said. “I want my girls to have a great time and to get better and be challenged, and also have that reputation as a winning team.”

The Grizzlies have one of the top girls basketball programs in the area.

Napa’s 2005-06 team went 31-3 overall, finishing as the CIF Sac-Joaquin Section Division I runner-up and making it to the Northern California tournament. Twice during that special season, Napa played at Arco Arena in Sacramento.

“(Ward) built it from the ground up,” said Willis. “She did such an amazing job that I just hope I can make her proud. We have a lot of the same philosophies. It’s really important that it’s continuing to grow it and make it better.

“I’m going to bring a lot of the same defensive and offensive philosophies. It’s huge shoes to fill. But I’m excited.”

Willis coached the Napa JV to a 13-12 overall record and an 8-3 mark in the VVAL season this past winter.

“I think it’s kind of a dream to raise up your own player and be able to hand your program off to that person so that they can take it,” said Ready. “Taylor understands what Darci has cultivated over the years. I also know that having Darci in the role as an athletic director that Taylor is going to have huge support.”

Background as a player

Willis played four years for Santa Cruz, an NCAA Division III school, and was selected to the second team on the 2014 All-Independent Women’s Basketball Team after averaging 3.5 points, 2.4 assists and 1.4 steals per game for the Banana Slugs (18-7 overall) as a point guard. The Association of Division III Independents made the announcement of the team. The All-Independent Women’s Basketball Team was selected by coaches from AD3I member schools.

She made 23 starts and averaged 24.9 minutes per game. She was a captain and team leader.

Santa Cruz had a 10-game win streak broken as it lost its regular-season finale to Cal State San Marcos, 67-66, in Oceanside. Willis had seven points, two steals and two assists in 24 minutes. Her 3-point basket pulled the Slugs within 62-60.

Willis started for the Banana Slugs as a freshman, and led them in assists and finished second on the team in steals.

At first, she didn’t think that she was going to play in college. But she realized a few months after her senior season that she missed the game.

“It’s definitely a step up from high school,” she said. “It was an amazing experience. We struggled my first year, but the next three years, we were really building a solid program. As a captain, it was really incredible to lead something like that.”

She was a three-year varsity player for Napa who also received the captain’s award and best defensive player award.

Willis was honorable mention All-MEL and a second-team All-Napa County player for Napa as a senior, when it went 25-3, won the Monticello Empire League title, and appeared in the CIF Sac-Joaquin Section Division I playoffs.

“I think that we will continue to have success,” said Ready. “Taylor’s a strong role model and she brings a knowledge of the game. She’s also as a strong student and went off to college and has the knowledge of playing NCAA basketball. She has experience and I know that she’ll be able to support our program from freshman and JV and varsity. And so I predict that we’re going to have a good future here at Napa High with her leadership.”

Willis is leading Napa through a summer program that began in June and will conclude July 20. Napa has played in tournaments at Justin-Siena, Lake Tahoe and San Marin-Novato, and will play in a tournament hosted by Novato.

“I didn’t think I could ever get this opportunity,” said Willis, a Napa native who lives in Napa with her husband, Adam Martinez. “So just to have it here and be able to grasp it and see where it goes, that’s so exciting.”

St. Helena High baseball star Caleb Jeske, today's Senior Spotlight athlete, was on track to cement himself as one of the best players in school history. Now, with his season canceled, he's finding the silver lining to the COVID-19 shutdown.

Taylor Willis, who helped the Napa High girls basketball team go 25-3 during her 2009-10 senior year and went on to play for UC Santa Cruz, is the Grizzlies' new head coach.

Taylor Willis, right, shoots for UC Santa Cruz against the University of La Verne during her college basketball career.