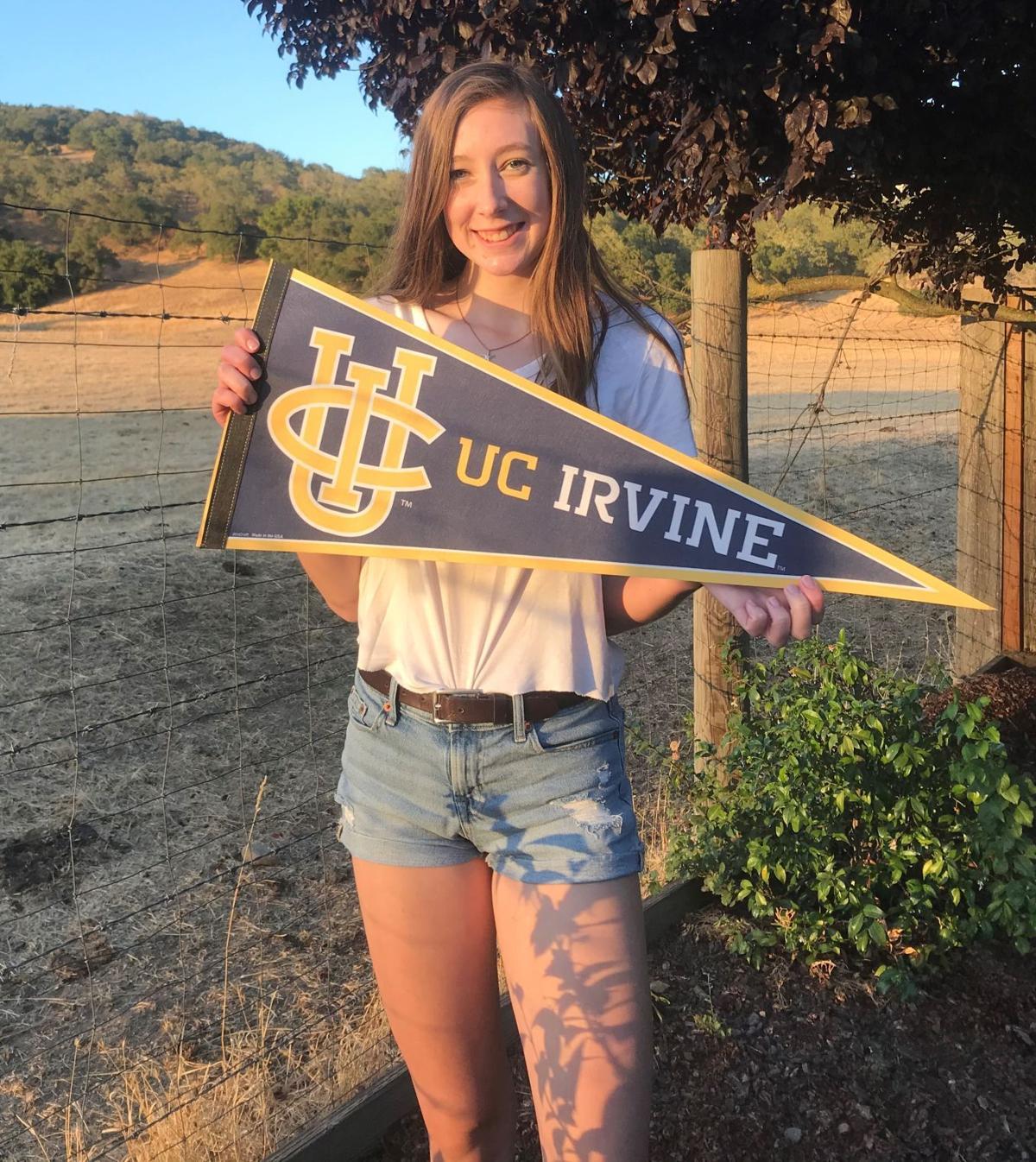 Megan Hanson, a Napa County Volleyball Player of the Year finalist in 2019, has committed to continue her career with UC Irvine's NCAA Division I program as a walk on after this season. 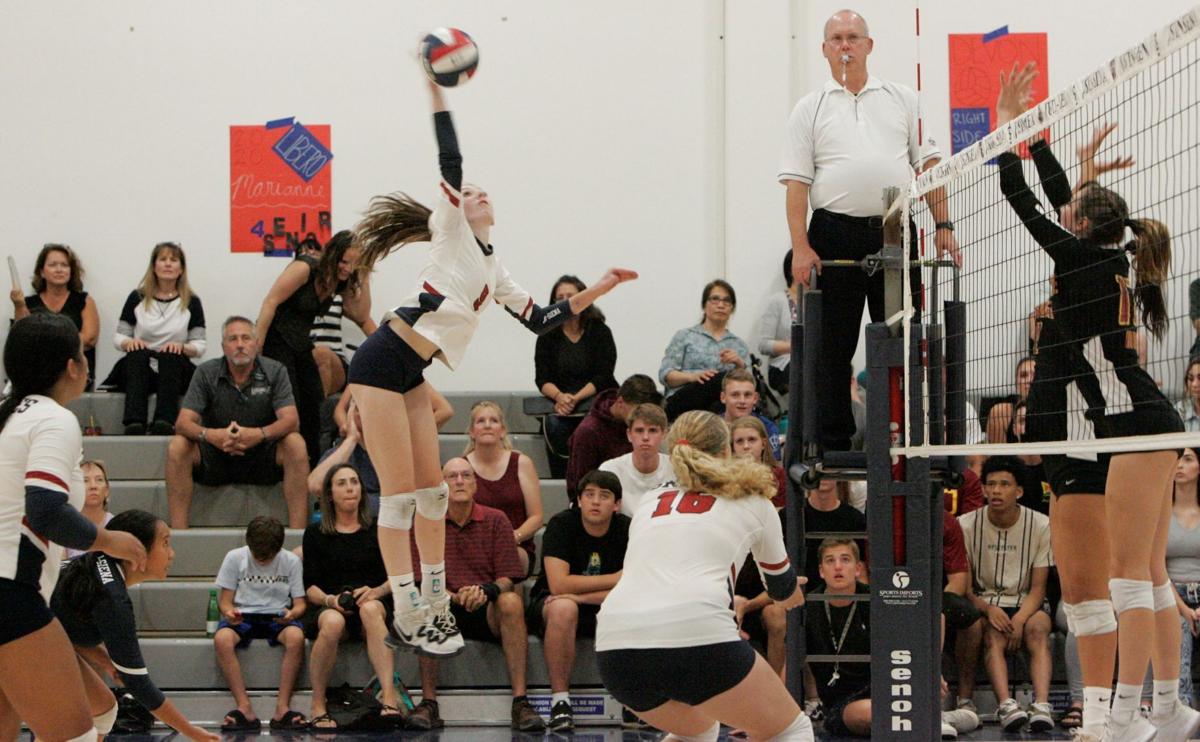 Justin-Siena's Megan Hanson lays into a kill attempt against visiting Vintage on Sept. 24, 2019.

Justin-Siena’s Megan Hanson was probably the second-best volleyball player in the Napa Valley last year as a junior behind Vintage senior Maddie Klungel, the Napa County Player of the Year.

Now that Klungel has moved on to Division I Cal State Northridge, Hanson could almost coast to the county’s top award during her pandemic-delayed senior season in spring 2021.

Hanson led the Braves with 333 kills last fall, 14.5 per match and 4.3 per set, along with 141 digs, 57 aces and 20 blocks. But it’s hard to become a Player of the Year without making your teammates better, and Justin-Siena skidded to a fourth-place finish in the Vine Valley Athletic League after winning it outright the year before in Julia Sangiacomo’s senior year, before the 6-foot-3 star went on to star as a freshman at Division I Santa Clara University.

The 5-foot-10 Hanson’s coaches always see room for improvement — especially those with Absolute Volleyball Club, the Marin County organization she’s has played for since she was 10, and Hanson feels she has improved in leaps and bounds.

“They are truly my family over there, and they’ve shaped me into the player I am today. All of the head coaches I’ve had at the club, especially Konrad Ott and Katie Pease, have had such a huge impact on me. They’ve all pushed me so hard and have made me stronger than I ever thought I could be,” Hanson said last week. “However, the head coach that I felt like most affected me was my coach this past year, Jake Spain. He was just a coach who understood my personality and encouraged me to use it on the court. He helped me so much when it came to recruiting and was always so excited when I’d get results. I really think he’s changed me as a player and ultimately showed me how to be confident on and off the court, brought out the best in me, and helped me grow as a player.”

On top of that, the pressure of impressive college scouts is off now that Hanson has made a verbal commitment to walk on at Division I UC Irvine.

“UC Irvine was a school I was always very interested in, ever since I was 15 years old, but I didn’t know it was going to be my top choice until I visited last November,” Hanson recalled. “It felt like I partly grew up in San Diego when I was younger because half of my mom‘s family lived down there. We would go down at least three times a year, and it was always my favorite place to be.

“Irvine is not too far from that area, so it all was very familiar. I just felt like I immediately fit in. UCI was my first choice out of the four colleges that were recruiting me. My Uncle Matthew Sileralso attended UC Irvine, finished with an outstanding senior award in 1996, and is now an executive at Amazon.”

Hanson hasn’t declared a major yet, but said she’s interested in are computer science and biological science.

“I am considering going into cyber security or genetics,” she said.

Kate Reilley, who has been promoted from assistant coach to head coach since her sister, Chelsea Reilley, stepped down after last season to take the Napa Valley College helm, couldn’t be happier for Hanson.

“She’d been talking to three other schools, too, but she went to one of Irvine’s camps and got to know some of the coaches and just kinda fell in love,” Kate Reilley said.

Hanson said wanting to be on one of the coasts narrowed down her possibilities.

“Some schools on the East Coast that I was interested in included Dartmouth and MIT,” she noted. “They had great volleyball programs as well, but I decided UCI was the right place for me. It has excellent academics, Division I athletics, and California was where I felt most comfortable. I was also interested in UC Santa Cruz and I really liked their program and coaches, but I felt that UCI was the whole package and best fit for me.”

Reilley, a Santa Clara alumnus like her sister, doesn’t mind that Sangiacomo is also playing for the Broncos. But she’s also thrilled that Hanson will be playing as close as an hour away when the Anteaters hit the road in the Big West Conference.

“We’re all thrilled that she’s staying in California, and they will be playing UC Davis,” the coach said. “That’s pretty close, so we can hop over to Davis and watch them play. Maybe we’ll do another team outing like we did last year, where the majority of our varsity team carpooled down to Saint Mary’s (in Moraga) to see Julia play them.

“I’d love to do that again and get them some exposure to a higher level of volleyball and also to see a former teammate.”

Hanson said she went on a “full campus tour” of UC Irvine and met with head coach Ashley Hain.

“Coach Ashley reminded me a lot of my club coaches, and her value for hard work and togetherness made me feel very comfortable and excited to potentially be a part of the 2021 volleyball team,” she said. “I not only admired the volleyball program, but I immediately fell in love with the campus. It’s absolutely beautiful!

“I didn’t get to see the full athletic facilities until I was invited back to attend a volleyball camp in January. The sports facilities and the support that they have for the athletes of UCI is very impressive. At that time, I also met the rest of the coaches, as well as a few players on the team. They were all very welcoming and kind and answered any questions I had.”

Hanson’s only organized sport these days is volleyball, though between high school and club, in non-pandemic times, had had her playing 12 months a year.

“When I was younger, I did play basketball for a couple years. I had the height, vertical and speed for it, but as time went on it began to conflict with the time demands of volleyball,” she recalled. “However, I did also love to run track in middle school. It didn’t conflict as much with volleyball, so I ran for St. Francis Solano School (in Sonoma) until I graduated.”

Hanson played as a freshman with her sister, Nicole, who graduated with Hannah Chau, now the top cross country runner at UC Irvine.

“I do not personally know Hannah Chau but from what I’ve heard, she’s very nice and a great athlete,” she said. “It will be very comforting to know that I’ll have another Brave on the UCI campus with me.”

Four members of the Sac-Joaquin Section champion Vintage High football team of 1986 look back at the memorable season.

Ali Thomas, a former prep star at St. Ignatius and 1000-point scorer at USF, will be Napa High's new head coach pending approval from the school district later this month.

Napa Valley Up & Comers: Bollinger, Hoang and Muhammad must wait

Megan Hanson, a Napa County Volleyball Player of the Year finalist in 2019, has committed to continue her career with UC Irvine's NCAA Division I program as a walk on after this season.

Justin-Siena's Megan Hanson lays into a kill attempt against visiting Vintage on Sept. 24, 2019.