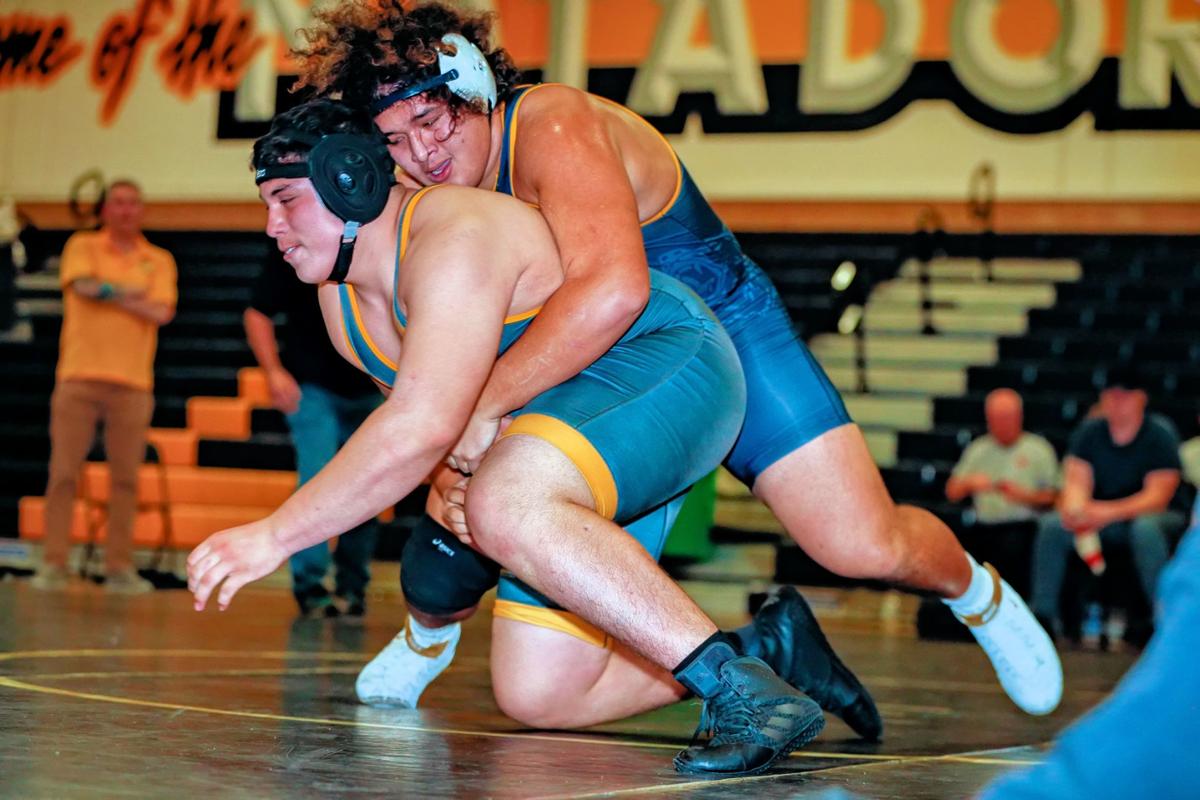 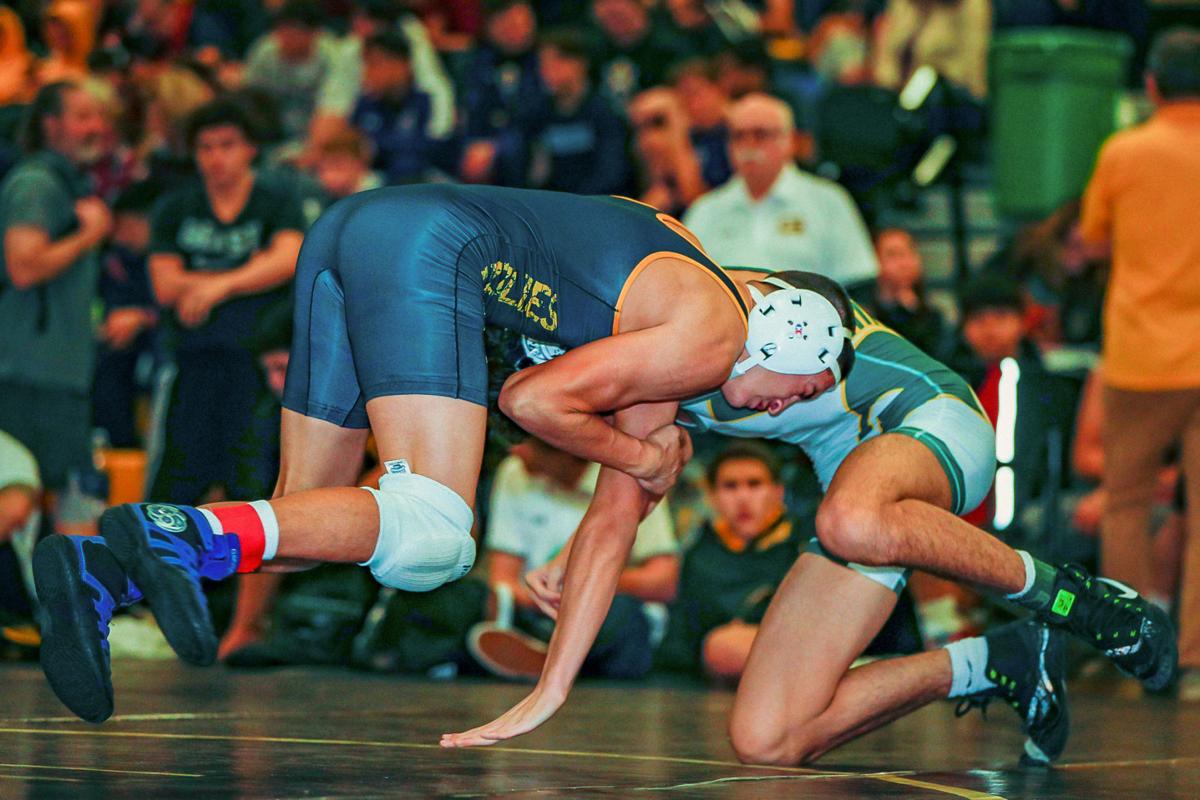 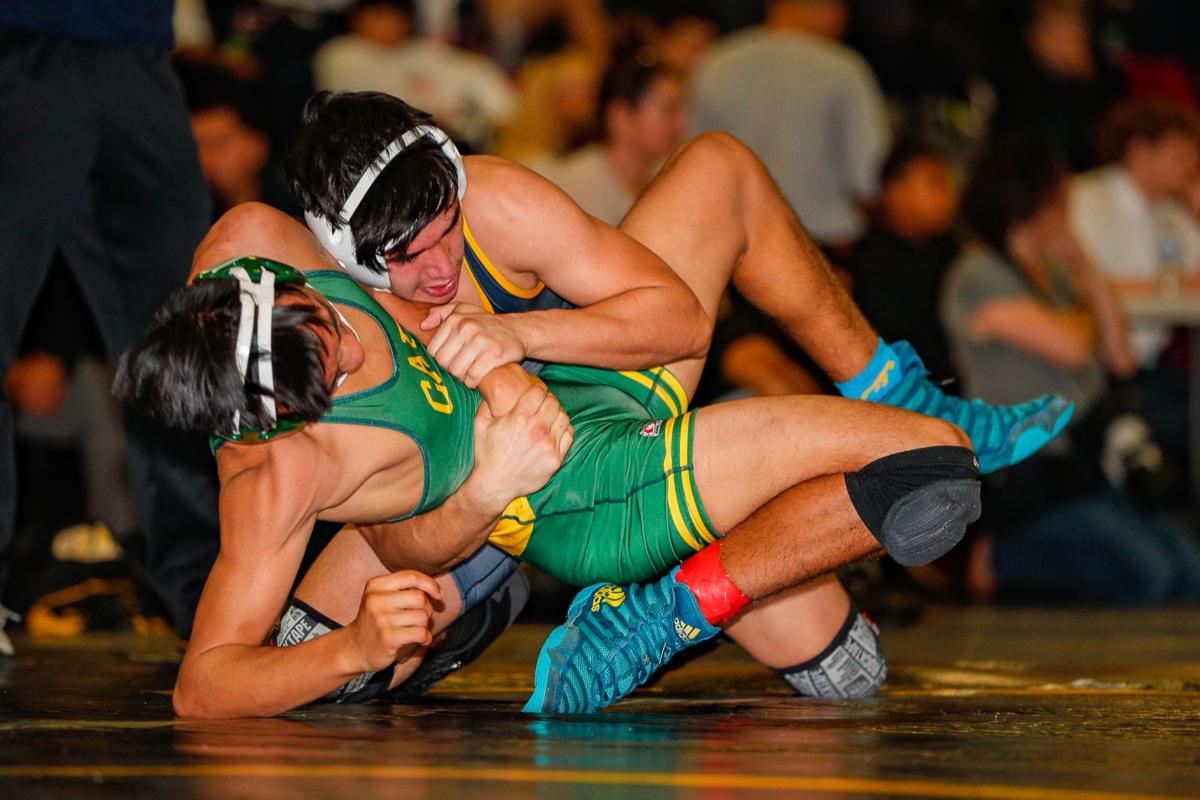 Napa High junior Axel Briseno, top, controls Capuchino's Josh Aguilar with his wrist before pinning him with one second left in the first period Saturday at Granada's Mat Classic in Livermore.

Napa High junior Axel Briseno, top, controls Capuchino's Josh Aguilar with his wrist before pinning him with one second left in the first period Saturday at Granada's Mat Classic in Livermore.

The Grizzlies placed 12th out of 43 schools in team scoring.

After receiving a first-round bye at 288 pounds, Lex pinned his first three opponents – August Gawiran of St. Patrick-St. Vincent in 1:25, Bear Creek’s Chris Chisley in the quarterfinals in 2:21, and Santa Rosa High’s Caden Holt-Allenain the semifinals – before winning a 9-4 decision over Granada’s Robert Porter in the final.

Saldivar went 3-2 at 129 pounds. He pinned Irvington’s Hezzy Crawford and then Mountain House’s Ryan Strout-Hearick, in 2:46, before getting pinned by Carson Prim of Grace Davis in 39 seconds. He came back by pinning Wilcox’s Joshua Urena, then was pinned by Pitman’s Conner Larosa. That put him in the fifth-place match against Placer’s Justus Haskin, but the match wasn’t contested because each had already reached his five-match limit for the tournament.

Manuel Infante (141) finished 2-2. After getting pinned by Archbishop Riordan’s Jason Tang in 42 seconds, he pinned Alhambra’s Nate Flores in 5:08 and won a 9-3 decision over Dougherty Valley’s Cal Overholzer. He was then pinned by Mountain House’s Cannon Waters in 2:32.

Robert Gomez (148) went 1-2. He pinned his first foe, Monte Vista’s Emilio DeLaTorre, in 1:08, before dropping an 18-6 major decision to Placer’s River Rogers and getting pinned in 3:06 by Granada’s Naeem Salemi.

Emilio Deianni (198) also went 1-2. He pinned San Lorenzo’s Johnny Contreras in 51 seconds, before getting pinned by Middletown’s Jared Pyzer in 1:36 and by Carson Struve of Grace Davis in 3:34.