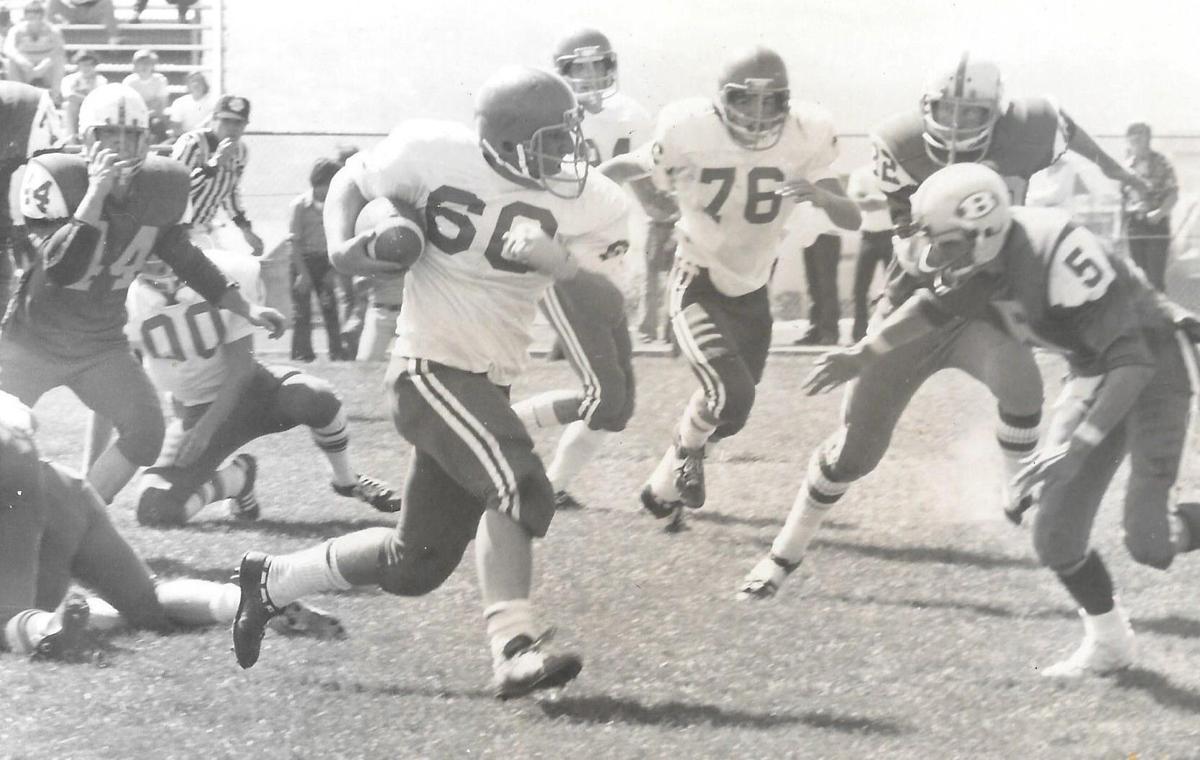 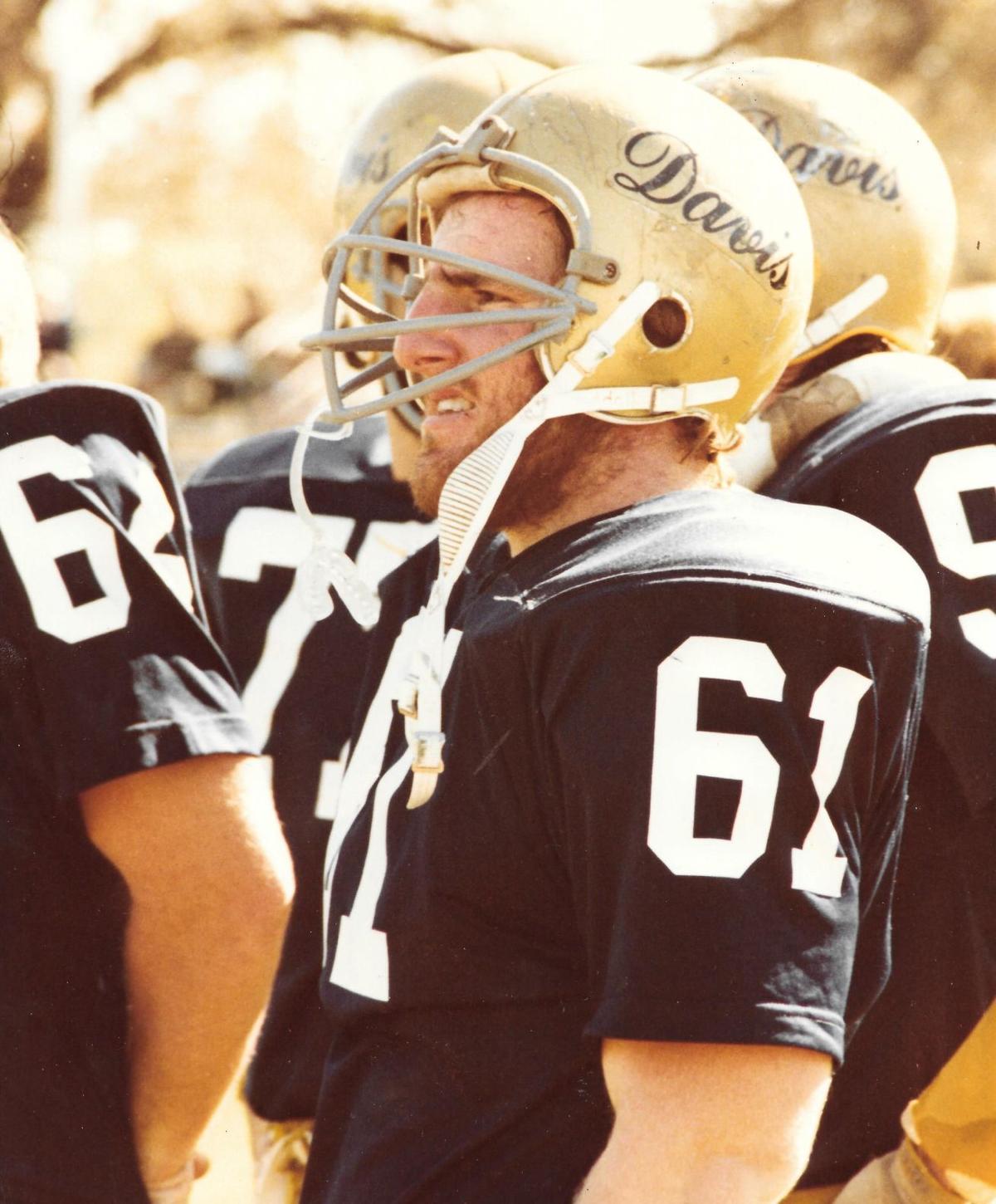 Bret DelBondio sits out a play during one of his UC Davis games in the late 1970s. 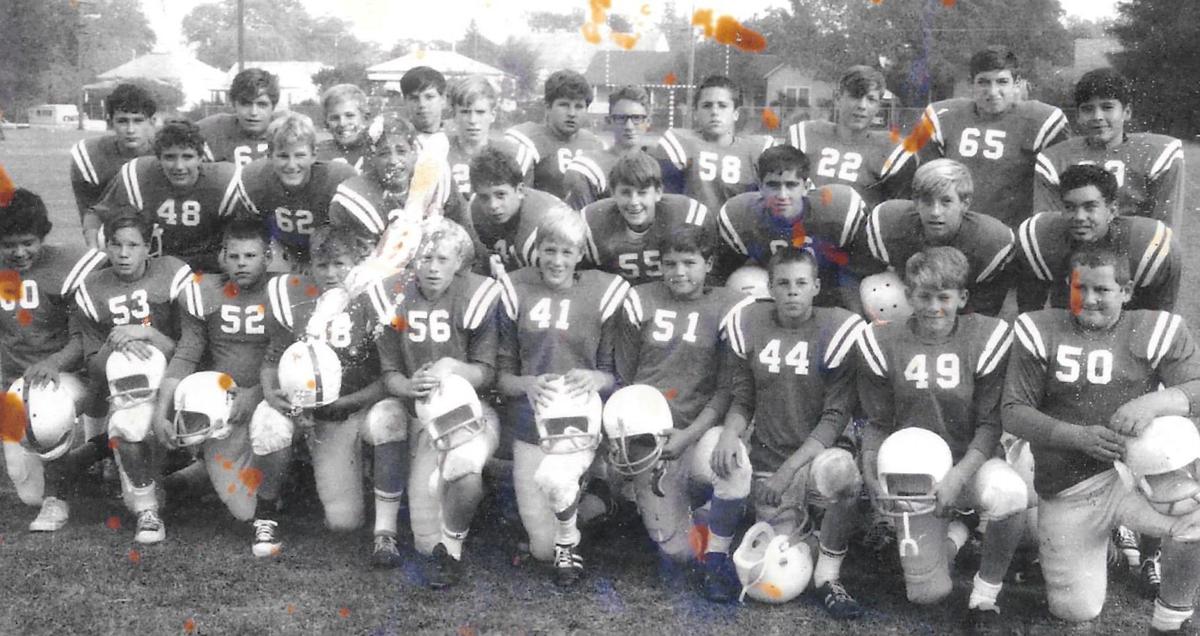 Bret DelBondio, bottom right, poses with one of his Carpy Gang youth football teams in the late 1960s. 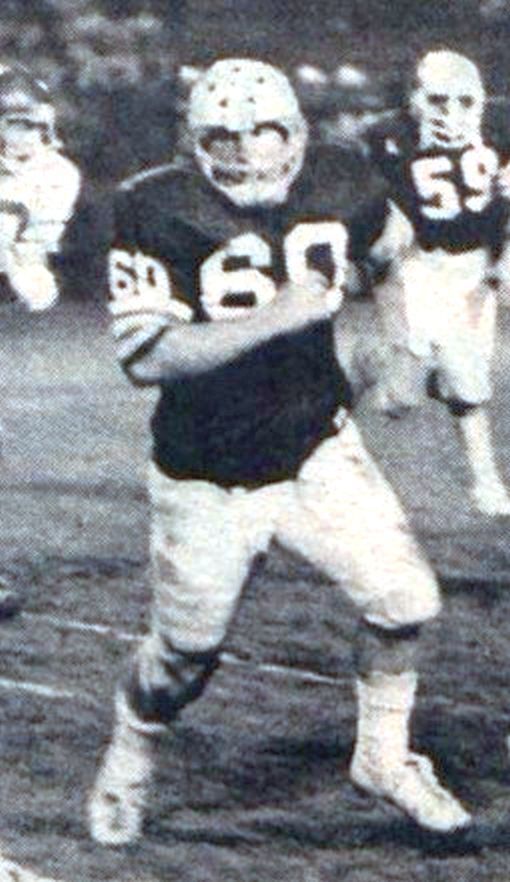 Bret DelBondio got to wear his high school jersey number while playing for Santa Rosa Junior College in the late 1970s.

From the time Bret DelBondio got his start as an athlete, in the pool, it seemed opponents were swimming upstream.

DelBondio was a three-sport athlete in football, wrestling, and track and field at St. Helena High but was especially dominant in football, continuing in the sport at Santa Rosa Junior College and UC Davis.

The 1976 graduate will be one of five inductees into the St. Helena High School Athletic Hall of Fame in a ceremony scheduled Saturday, Oct. 23, at the Native Sons Hall in St. Helena. The 2020 version was canceled because of COVID-19. DelBondio is one of three inductees entering as athletes, along with Bridget Maloney Malone (1999) and Robert Covey (2005), while Artie Carr is going in for distinguished service and Gordon Anderson as a coach.

DelBondio’s induction is personal in one respect because he joins teammate Terry O’Rourke, who passed away in 2017 and was inducted posthumously in 2019.

“I really hadn’t thought about it much,” DelBondio said of his induction. “Then I got a call from Darrell Quirici. I was taken aback. It’s quite an honor.”

Quirici, who graduated from St. Helena in 1977, was a teammate of DelBondio and is a board member for the SHHS Athletic Hall of Fame.

DelBondio now lives in Napa with his wife, Lisa, and works for a vineyard management company. They have four children — Trevor, Connor, Mason and Sophia, a 2014 Vintage High graduate who starred in water polo and swimming for the Crushers and also from 2014-18 for the Virginia Military Institute.

But while growing up in St. Helena in the 1960s and 1970s, Carpy Gang football and St. Helena Little League baseball were central figures in his life.

DelBondio was a three-year varsity football player for head coach Charley Toogood as an offensive and defensive tackle and as fullback. He was the left, blindside tackle on offense and lined up in the Saints’ 4-3 defense as a 3-technique, in the gap between center and guard. He also wrestled in the heavyweight class for coach Pat Delger’s teams, and threw the shot put and discus in coach Tobe Wolf’s track and field program.

DelBondio recalled his earliest memories of morphing into a student-athlete.

“My mom would drag me down to the pool and we swam,” DelBondio said. “I was just a little kid on the swim team. We did a lot of sports. My dad was involved as a Little League coach. We played baseball as well as Carpy Gang. It was like a regular thing every year. That was how it all started. We were always doing something. As you go into high school, the main thing for me was football. I was always a bigger kid. We had a pretty tight class. We jelled over the years and had a good team. It was a special bond that we had.”

Toogood thought so much of DelBondio that he not only brought him up to the varsity as a 10th-grader but named him Outstanding Sophomore of the Year.

“Frankly, I was scared,” DelBondio said. “I knew most of the guys, but I was scared to death to not do well. It worked out. Once you get going, you fit in and make your way. Then people accept you. After that, it was OK.”

As a junior, he was All-NCL I on both the offensive and defensive lines and was the Saints’ Co-Most Valuable Player with Laverne O’Rourke.

As a senior, he was the NCL I Lineman of the Year, received all-league honorable mention as a fullback after carrying the ball 68 times for 365 yards, and was named to the All-Napa County team.

“It was a neat thing to play varsity as a sophomore, but I kind of regret that because I didn’t get to play with my classmates as a JV player,” he said. “But when we were all on varsity, it was special, particularly for our senior year.”

DelBondio’s initial apprehension of playing on varsity contrasted starkly with a comment Toogood made before the Saints’ CIF North Coast Section Class A championship game against Ferndale.

“I can use some of my old pro moves against Bret, and he picks them right up,” Toogood told the Napa Valley Register.

Toogood played college football at the University of Nebraska and in the NFL for seven years, six with the Los Angeles Rams and one with the Chicago Cardinals.

“It was the camaraderie of being with your classmates,” he said. “It was something different. There was the constant hitting that you have in football, but I enjoyed getting out in the springtime with track and field. It was enjoyable.

“I even experienced it a little bit with my daughter. She played water polo. There was club water polo and it was year-round. I hate to compare myself to her, but I had a different experience getting to do various things. Watching her do water polo with Vintage or her club team, you could sense burnout every once in a while.”

DelBondio’s football resume, however, is long enough to measure first downs — with emphasis on the plural.

He was a finalist for the National Football Foundation and Hall of Fame’s Northern California Chapter and was selected as St. Helena High School’s Outstanding Scholar-Athlete for the 1975-1976 school year.

“It was a great honor, and it goes a long way toward Coach Toogood,” he said. “He was one of our teachers, too. He taught history. He was a good example because he played professionally for the Rams. He was also a good example as far as getting your education. I can’t say enough about the influence he had on me as I played football. He was a coach you wanted to play hard for. He had that demeanor about him that you admired. I had a few other coaches like that, but I particularly remember Coach Toogood.”

Besides his accolades at St. Helena, he had an accomplished college career. He made the All-Camino Del Norte First Team on defense in 1976 and 1977, and received SRJC’s Hard Nose Award in 1977.

“I was not ready to go to Davis as far as the scholastic part of it,” DelBondio said of why he attended Santa Rosa. “I think it was good for me to go to JC. Physically, apart from that, I was not ready to play at Davis. But when I went to JC, they would have a recruiting system where he would bring in a lot of students from Hawaii. These kids were big and strong. Coming from a small school, we didn’t do any training as they do now. I was behind the eight ball in a big way, but I caught up fast. They were great guys to get to know. They invited you in. Then I caught up both physically and scholastically. I sometimes wished that was a four-year school.”

At UC Davis, DelBondio received the Jim Ferrier Award for being the most outstanding transfer after helping the Aggies reach the NCAA Division II playoff quarterfinals. In a game played in November 1979 against Santa Clara, he was named Far Western Conference Defensive Player of the Week for recording 11 tackles and two quarterback sacks.

Even though he was one of the small percentage to have an opportunity to play sports at a high level after his high school career, his heart never left St. Helena.

“It was a small town, but there were always people that put in their time for you,” he said. “You had Carpy Gang coaches like Bimmer Sculatti and Artie Carr. There was always an avenue for a kid to have to stay out of trouble. There were lots of sports available. It was a small, close-knit community. You got to grow with your classmates. I grew up with people I graduated with. It’s not like going to school in Napa, where there are 3,000 kids.”

Whether the pond was big or small, sports went swimmingly for Bret DelBondio.

Artie Carr, who wore many different hats in the St. Helena community, in and out of sports, will be one of five inductees into the St. Helena High School Athletic Hall of Fame’s 2021 class, after the 2020 version was cancelled due to COVID-19.

The St. Helena High School Athletic Hall Of Fame has announced its class of 2021, which is scheduled to be inducted during the hall’s eighth annual induction ceremony Oct. 23 at Native Sons Hall in St. Helena.

Bret DelBondio sits out a play during one of his UC Davis games in the late 1970s.

Bret DelBondio, bottom right, poses with one of his Carpy Gang youth football teams in the late 1960s.

Bret DelBondio got to wear his high school jersey number while playing for Santa Rosa Junior College in the late 1970s.