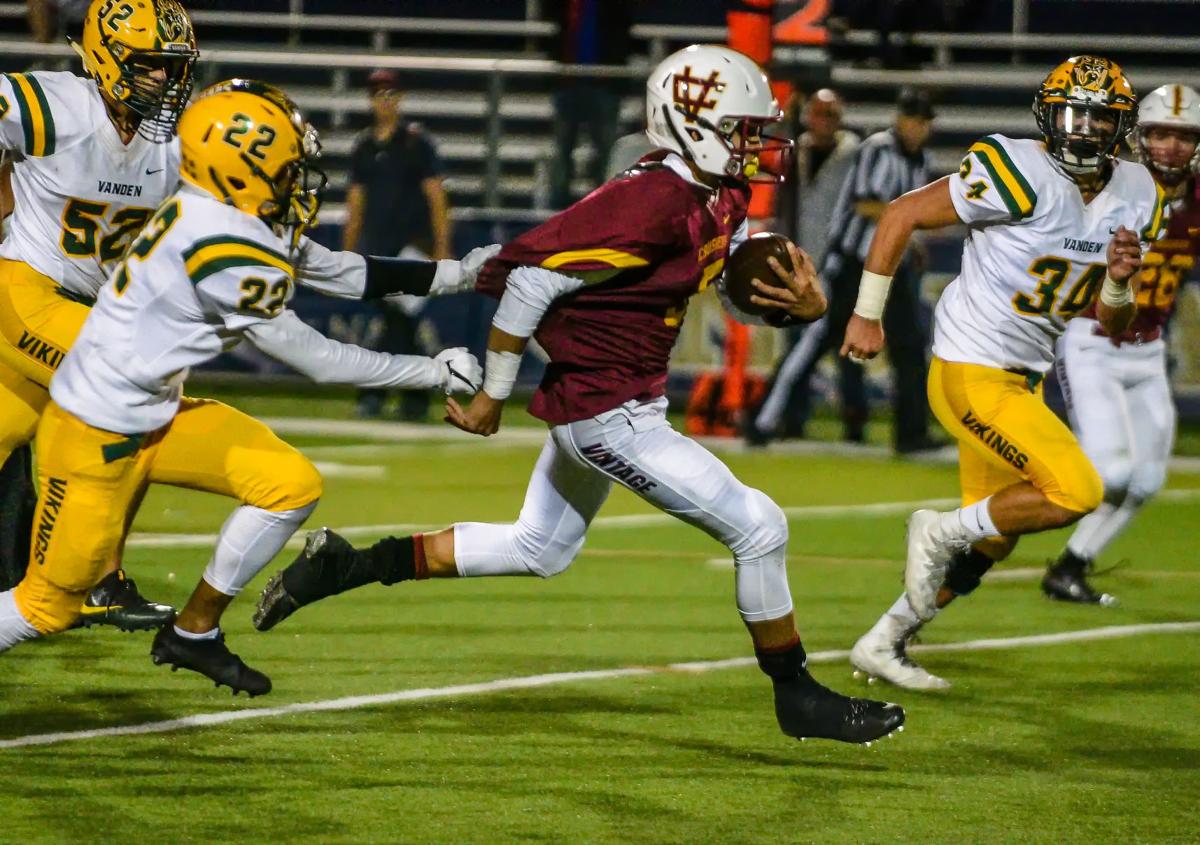 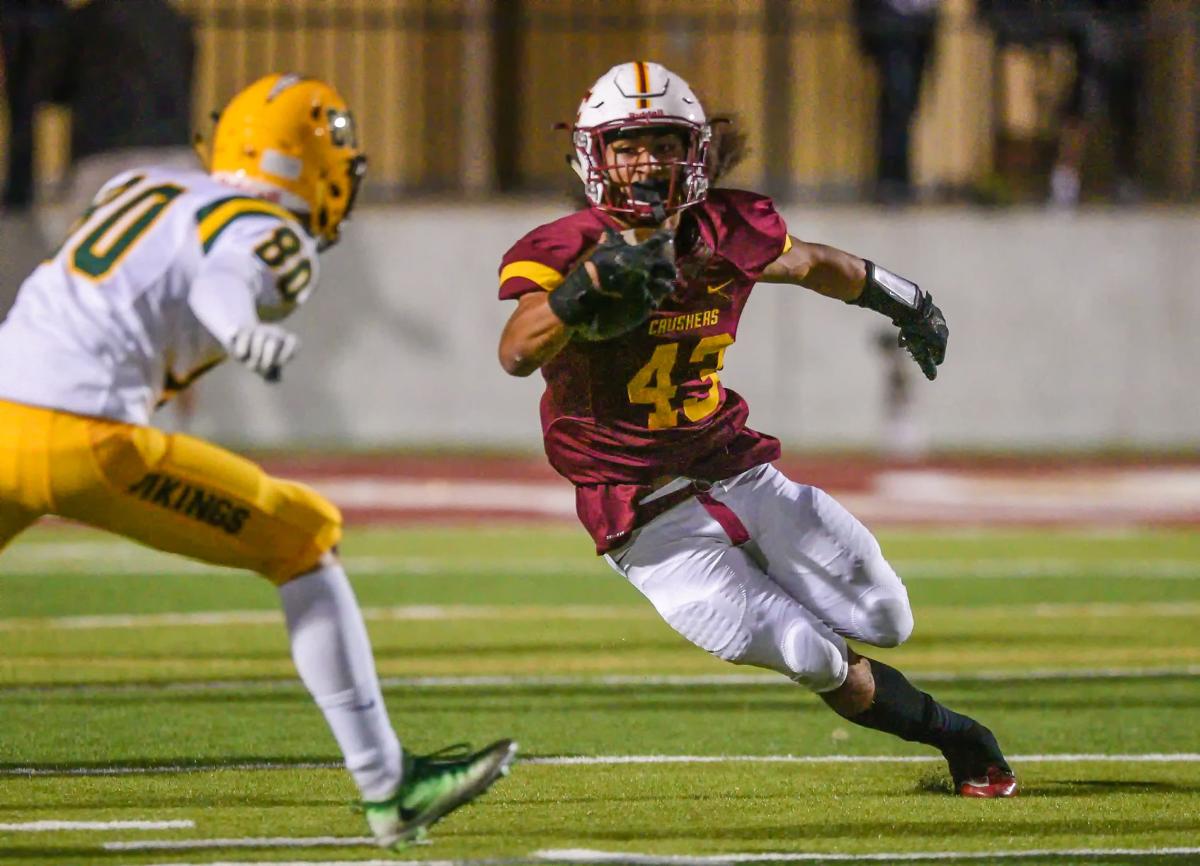 Vintage High senior Triston Schaumkel, who was crowned Homecoming King at halftime, looks to get past Vanden's Taylor Bruner during the first half Friday night at Memorial Stadium. 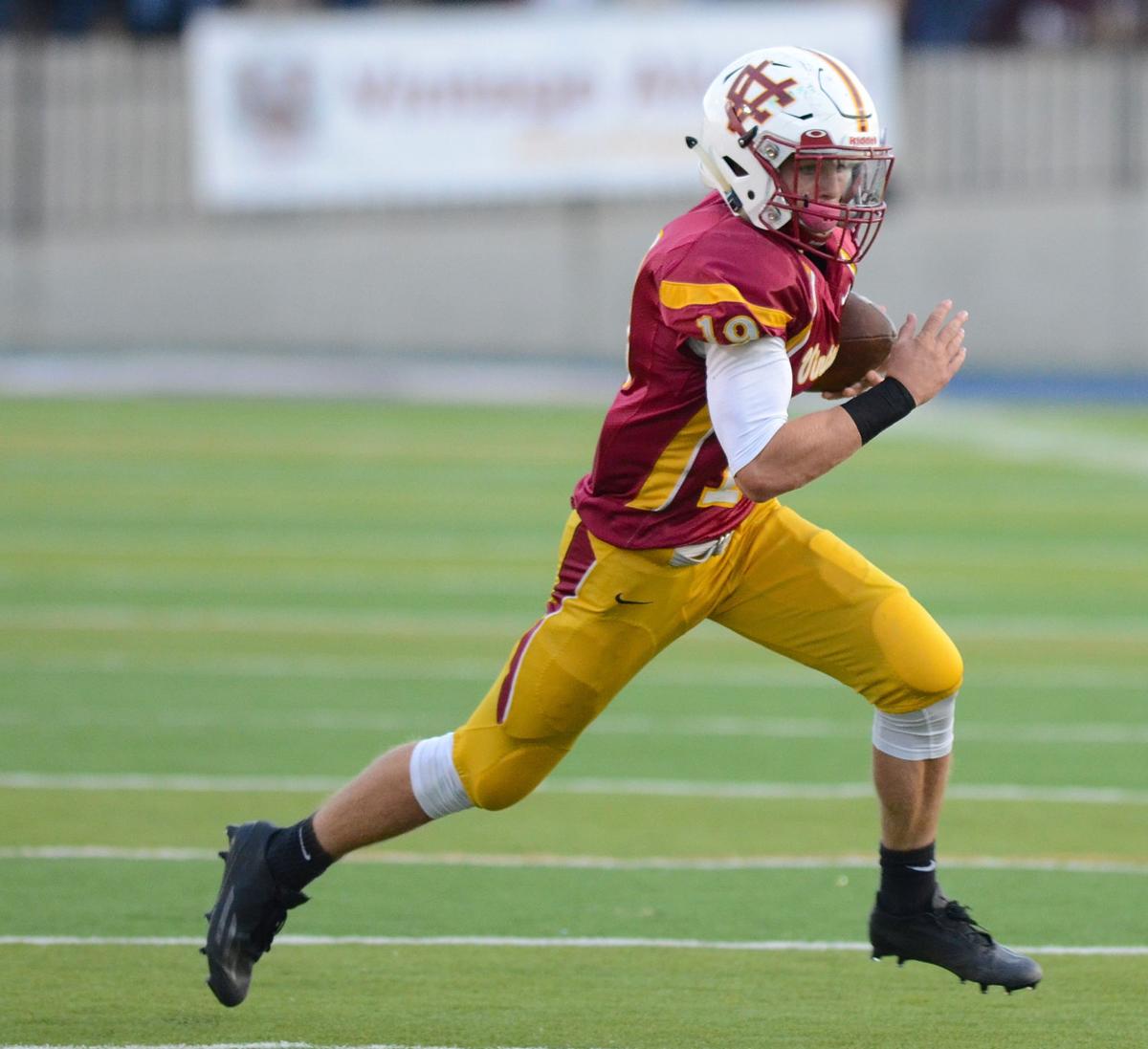 Vintage High sophomore Michael Webber runs for 12 of his 23 yards in the junior varsity squad's victory over Vanden on Friday night.

Both starting quarterbacks wore No. 7, but Vanden’s returning starter looked like John Elway.

After throwing for just 189 yards combined in his first four games of the season while battling injuries, Vanden senior Stefan Koss completed 13 of 16 passes for 231 yards and a career-high six touchdowns as the Vikings defeated Vintage in its homecoming game, 44-14, on Friday night at Memorial Stadium.

Vintage junior quarterback Isaiah Garcia completed his first two passes, including a 9-yard touchdown pass to Triston Schaumkel while rolling out to his right that cut Vanden’s lead to 12-7 early in the second quarter.

But he misfired on his next three passes and, after rushing for 39 yards on 12 carries, gave up the spot to senior Stephen Hill late in the third quarter.

Despite trailing 37-7, Vintage fought hard to get on the board again. An 18-yard pickup by James Robert, with a 15-yard penalty tacked on, put the Crushers in business at the Vanden 15. Garcia had two short carries on the drive before Hill took over and was sacked on third down. But Garcia came back in and threw a 21-yard scoring pass on fourth down to Zach Geary. Abdeil Ballines threaded his second extra point of the night to make it 37-14 with 5:33 left in the third.

The Crusher defense staged two goal-line stands, the first while they were trailing just 18-7 late in the first half after the Vikings got a first down at the 2. The other was in the closing minutes of the game.

“That’s one thing I’ll give this team credit for, is they’re not afraid to play hard and fight to the end,” Vintage head coach Dylan Leach said of his Crushers (2-3). “It’s just a matter of playing smart and playing football the right way, and I’m not sure we’re there yet. It is what it is. We’ve just got to get better.”

Stranger things have happened than scoring the 24 unanswered points Vintage needed from there. But the Crushers couldn’t keep Koss from striking once more. He hooked up with Jaydan Key for the second time of the night, from 4 yards out, and Jake Lagrand’s second PAT made it 44-14.

“We were better in the summer with our pass defense than we showed tonight. It’s a little bit disheartening when you take steps backward like that,” Leach said. “But this game never changes: it comes down to tackling, running and blocking, and we don’t do those three things. If we can’t tackle somebody or we can’t block somebody, we’re going to be in these situations the rest of the year.”

Vintage ran out of downs and fumbled away the ball on its last two drives.

Schaumkel – who was crowned Homecoming King at halftime – was held to a net 1 yard on six carries but had 16 yards on two catches, including the touchdown grab.

Three Vintage running backs saw their first carries of the season – Ray Garcia (five for 10 yards), Josh Robert (three for 34 yards) and Antonio Olvera (one for 26 yards) – after sophomore Eddie Byrdsong was moved down to the junior varsity.

Byrdsong was the Crushers’ leading rusher after four games, with 326 yards. But he also made his share of mistakes.

“I’m not sure he was our top guy,” Leach said. “We had top guys sitting on the bench. Eddie’s a great runner, but he needs to grow as a running back, to know where the holes are and who to block, to go the right way and not jump offsides on the goal line. He’s great kid and he’ll learn that, so I’m not worried about Eddie at all.

“It wasn’t (not having Byrdsong) that was the problem tonight. It was trying to sustain a drive. We could have had Walter Payton and it really wouldn’t matter if you can’t block and you don’t move people up front. The running backs are the least of our problems at this point. When you have a scheme that is designed to move people out of the way like every scheme in high school or any level, and you don’t win the individual battle, it doesn’t matter who’s at running back. That’s just a secondary thing at this point. We’re not winning any battles.”

The Crushers will begin Monticello Empire League play next week at Rodriguez with three senior captains, all in their third varsity seasons, not on the field due to injuries – quarterback/safety Richie Hardwick (foot), slotback/linebacker Connor Bates (ankle), and offensive lineman Wyatt Irwin (back).

“Wyatt’s a big loss up front, and Richie was our offense and our best defender,” Leach said. “But we’ve got to make adjustments for it and play hard and get through those times.”

Michael Webber had two touchdown passes and fellow quarterback Max Phipps had a pick-six on defense to lead the Crushers (4-1) in their nonleague finale Friday night.

Sophomore running back Eddie Byrdsong, who was on the varsity for the first four games, made his JV debut with 10 carries for 86 yards for Vintage.

After Vanden went three and out, Webber (5 of 6 passing for 73 yards) put Vintage on the board by finding a wide-open James Lucero for a 25-yard scoring strike with 2:39 left in the first quarter. That capped an 11-play, 87-yard drive fueled by a 23-yard Byrdsong scamper and a 15-yard jaunt to the Vanden 25 by Jesus Galvan (six carries for 60 yards).

It was still 7-0 at halftime, after the Vikings ran out of downs at the Vintage 18 and Phipps lost a fumble while being sacked in the final minutes.

After the Crushers fumbled on the second play of the third quarter, they turned the ball over on downs.

But the Vikings also stalled on their first two drives of the half, and Vintage upped its lead to 14-0 with an 11-play, 76-yard march. On fourth and 20, a 24-yard catch between two Viking defenders by Josh Robert at the 2 set up a 1-yard scoring plunge by Drew Hatfield (eight carries, 18 yards).

Webber, playing safety, broke up a long pass and Angel Castillo recorded a fourth-down sack to get the ball back at the Vanden 32. Five plays later, Webber found Abrahan Cortes with a 15-yard TD pass. Vanden then drove to midfield, before Phipps jumped the route and return an interception 45 yards to the house for a 26-0 lead with 1:44 left in the game.

Vanden nixed the shutout bid with a 55-yard TD run by Jayden Blakely and two-point conversion by Jonathan Brenes on a quarterback keeper with 1:26 left.

Vintage High senior Triston Schaumkel, who was crowned Homecoming King at halftime, looks to get past Vanden's Taylor Bruner during the first half Friday night at Memorial Stadium.

Vintage High sophomore Michael Webber runs for 12 of his 23 yards in the junior varsity squad's victory over Vanden on Friday night.