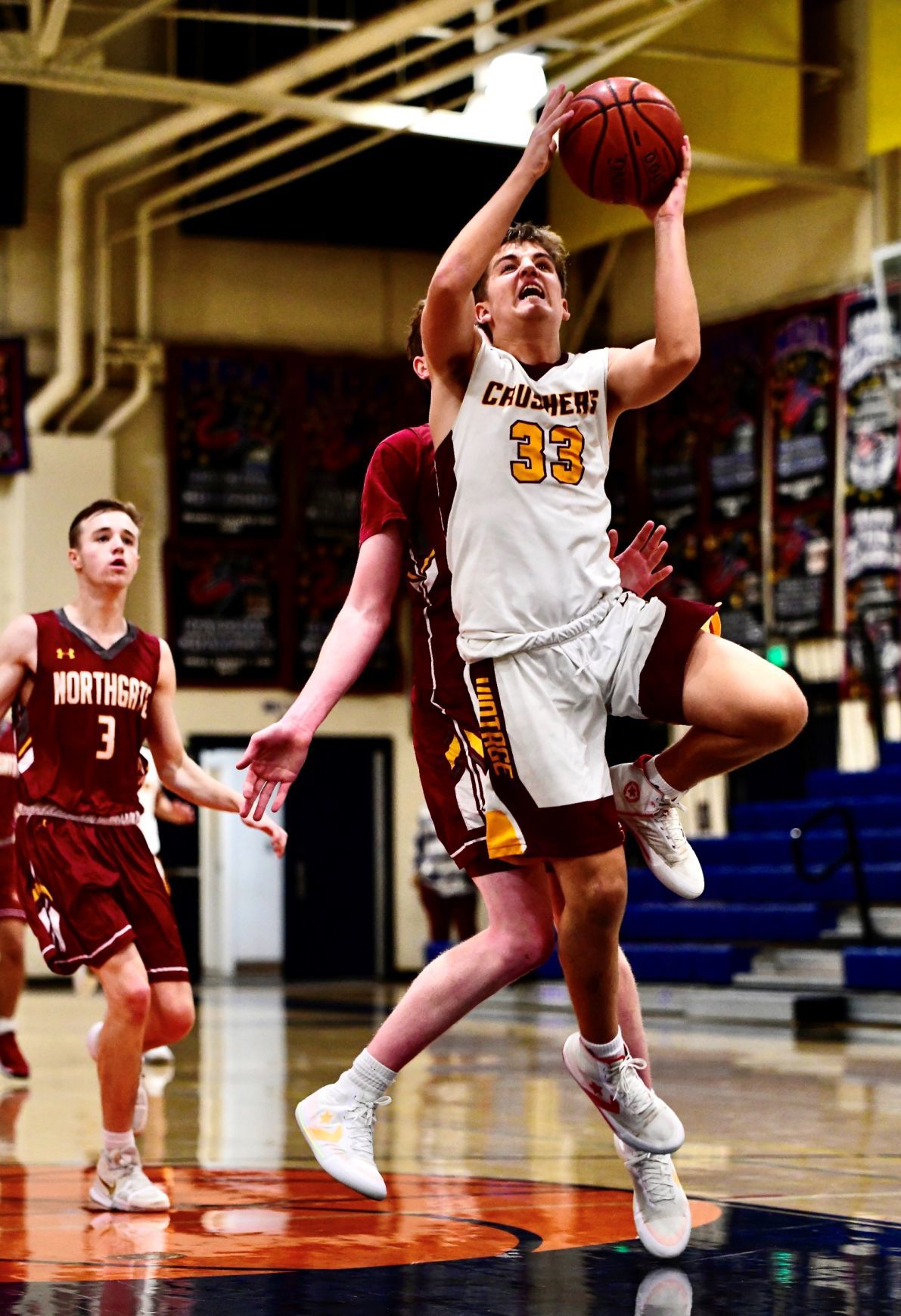 Vintage's Owen Schnaible (33) drives for a layup against Northgate on Dec. 5 in a Wine Valley Tournament opener at Napa High. 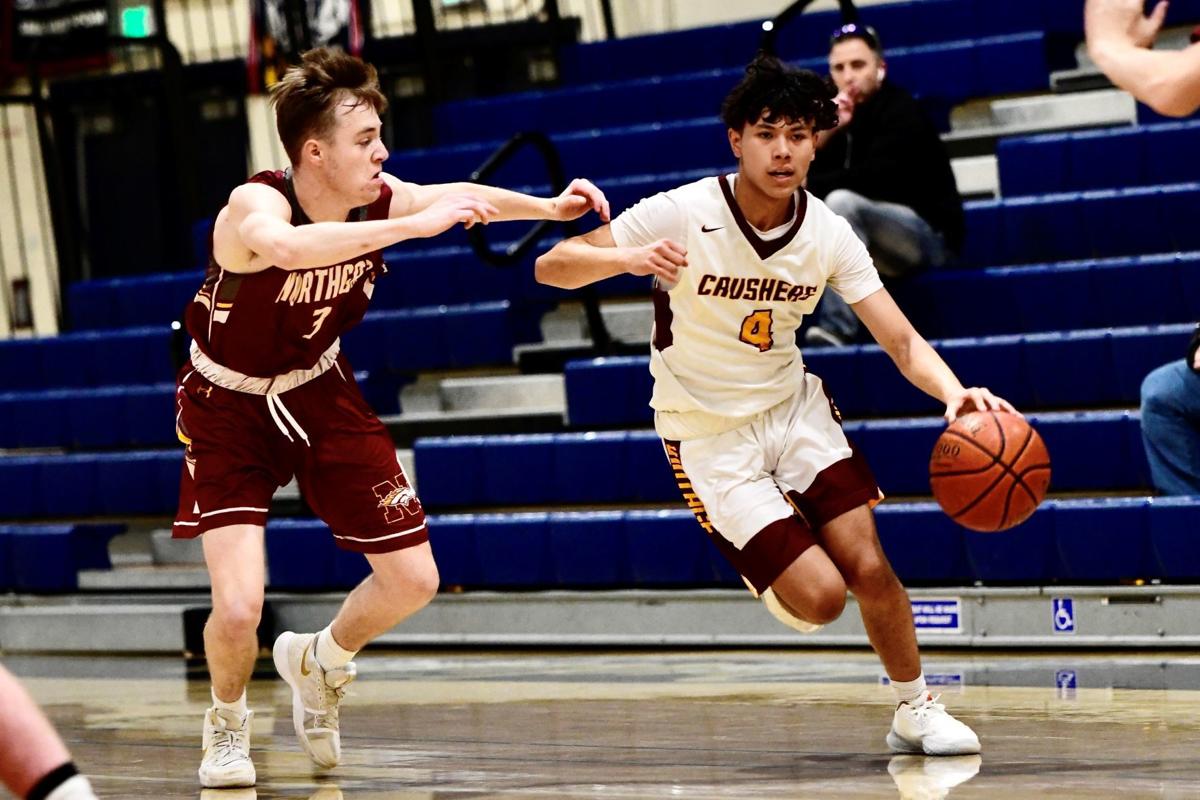 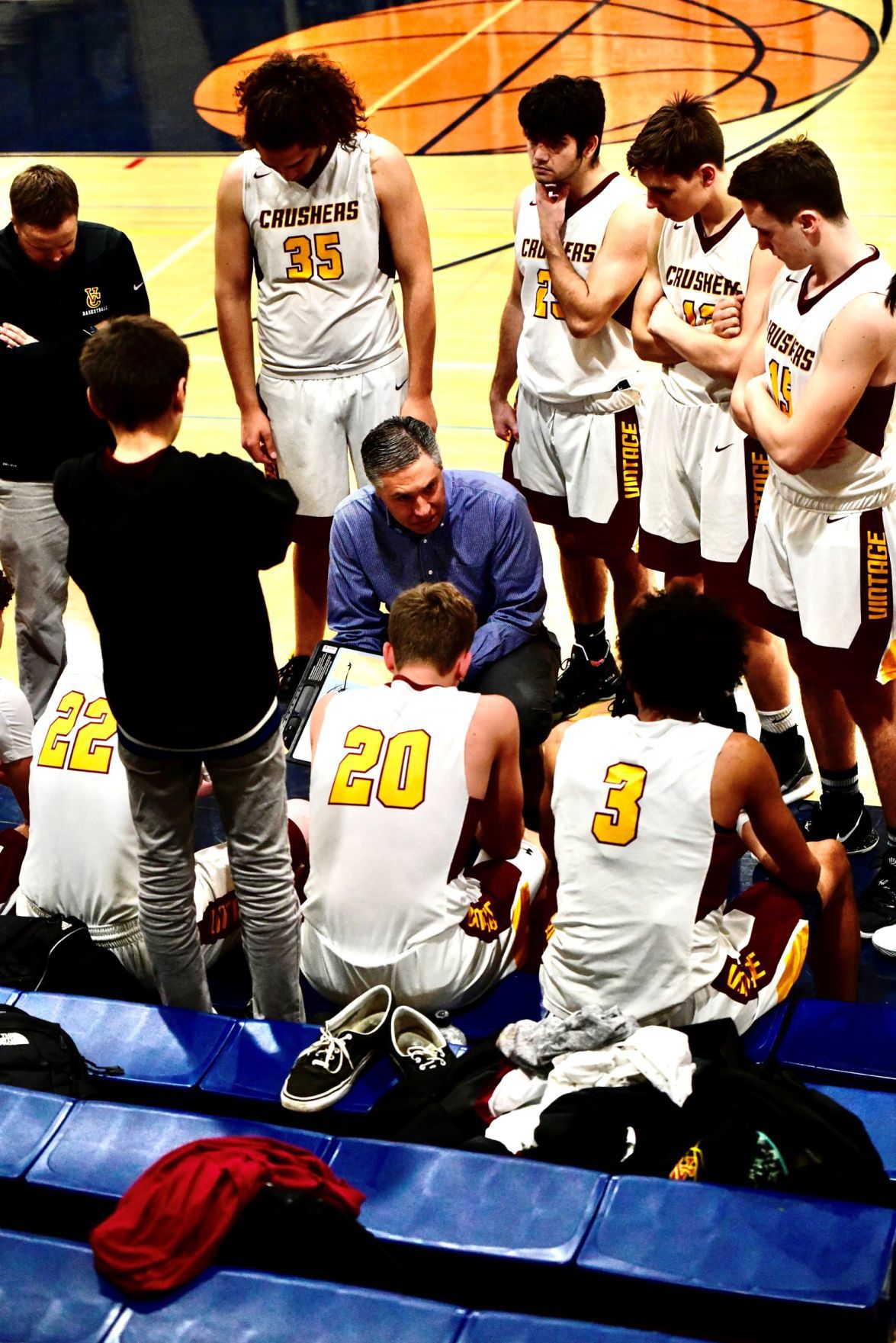 Vintage head coach Ben Gongora talks to his team during a Wine Valley Tournament opener against Northgate on Dec. 5 at Napa High.

Vintage's Owen Schnaible (33) drives for a layup against Northgate on Dec. 5 in a Wine Valley Tournament opener at Napa High.

Vintage head coach Ben Gongora talks to his team during a Wine Valley Tournament opener against Northgate on Dec. 5 at Napa High.

The Vintage High boys basketball team has had the epitome of a roller-coaster season in Ben Gongora’s return as head coach after 15 seasons away.

Since then Vintage (8-7) has gone 2-0 in Vine Valley Athletic League play, and will try to win its third straight when it visits Petaluma (9-4, 1-0 VVAL) Friday night. Vintage is the VVAL’s highest ranked team in the MaxPreps.com North Coast Section Division 2 poll at No. 18, with American Canyon at No. 19 and Petaluma at No. 20.

“We’ve played a challenging schedule filled with talented, scrappy teams that have forced us to either sink or swim,” Gongora said. “I definitely think we are in a better place than we were when the season started. The tough preseason schedule has forged a selfless team personality and desire to constantly take steps forward. I don’t take that for granted. I’ve been around basketball long enough to see teams, sometimes very talented teams, fold when January shows up and league play begins.”

Gongora has been grateful for being given the helm again after first coaching the Crushers in 2003-04 and 2004-05, to combined records of 12-42 overall and 4-26 in the Monticello Empire League. Then-principal Eric Schneider told the Register back then that he asked Gongora – a 1993 Napa High graduate and member of its 1992 Sac-Joaquin Section champion squad – to step down because he wanted an on-campus coach.

With none of his current players even in elementary school when he last coached the Crushers, he’s just a new coach to them.

“Any time a new coach comes in, there’s the possibility that the transition takes time and the team can suffer. I don’t think that has happened,” he said, “and that’s a tribute to the 13 guys I’ve got in uniform. They’re great teammates for each other and they invested in my philosophy from Day 1, way back in the summer. Sure we’ve had some ups and downs, but these players are resilient and fight for one another.

“Most importantly, our varsity roster is filled with really good kids from supportive families. That’s a darn good foundation for any team, no matter the sport.”

One member of the team who remembers Gongora’s first years at the Vintage helm is assistant coach Brett Wedding, who was his JV coach at the time.

“Having Coach Brett Wedding by my side has been invaluable,” Gongora said. “He is a wealth of basketball knowledge and has been a great fit for us as an assistant. He’s a no-nonsense, chip-on-his-shoulder type of coach and that tends to elevate competition during practice.”

Chuck Johnson, who coached the Napa High varsity in 2008-09, is now at the JV helm and assisted by Eric Thompson. Drew Willems is the freshman coach.

“I am very happy with our coaching staff and what they offer the kids throughout the program,” Gongora said.

Here is a look at the players, with comments from Gongora:

Logan Nothmann, 6-0 junior point guard: “Logan is a very talented point guard with tremendous speed, vision, and floor game. He has one of the higher basketball IQ’s I’ve seen. You match that with his athletic ability, and he’s a pretty special player for us. Unfortunately, he suffered a broken leg in early December and we haven’t had him in games since, but he’s been at all practices, workouts and film sessions and remains one of our captains. We are hoping he can get back to playing by the tail end of league play – maybe the postseason if we’re fortunate enough to get there.”

Imani Lopez, 6-2 senior guard-forward: “Imani is an electric basketball player, especially around the rim. He’s slippery and has a unique offensive skill set with his long arms and springs in his feet. I expect him to put points on the scoreboard for us, for sure, but also be a presence on the defensive end of the court. He’s grown up a lot in the last couple of years and is just tapping into his basketball potential.”

Josh Kho, 5-9 senior guard: “Josh has taken over the lion’s share of point guard responsibilities with Nothmann’s injury and really flourished. His ball-handling ability and decision-making are tremendous assets for our team. While distributing the ball is his bread and butter, he will knock down some shots if teams leave him open.”

Anthony Marek, 6-2 junior forward: “Anthony is a team-first player that we are hoping continues to develop this season as a junior. Right now, he’s playing behind some other guys, but has maintained a positive attitude and remains important to our team. He is the Associated Student Body president, and that doesn’t happen without a high level of integrity and respect from his peers.”

Blake Murray, 6-3 senior guard-forward: “Blake has really matured as a basketball player and as a young man. He can fill it up from the perimeter, drive to the hoop and finish with authority, and he can post up smaller opponents when the opportunity comes. He will be on the floor for us when it really matters. His leadership isn’t loud, but it’s very important to our team.”

Luke Williams, 6-2 senior forward: “Luke is a tough kid that will play some valuable minutes at the post position. He plays big and isn’t afraid to mix it up to grab rebounds and get after loose balls. His unselfish play is a true strength for our team.”

Ethan Hemmerlin, 6-0 senior guard: “Ethan was primed for another great season before injuring his shoulder in mid-December. Despite the injury, he manages to still bring similar attributes from the bench as he did from the floor. He is calm, cool and collected. I can’t say enough about how impressive this young man is, as he has faced some tough adversity. He is one of our season captains and it is well-earned.”

Sam Neal, 5-9 junior guard: “Sam didn’t make it out to basketball until nearly December due to the successful Vintage football season. As a result, he’s had some catching up to do. He is a gifted athlete and a high-character guy. He plays great on-ball defense and can knock down the outside shot when left open. While his minutes are a bit sparing right now, I expect him to compete for more and more as the league season continues.”

Everett Mitchell, 6-3 junior forward-center: “Everett has continued to improve as the season has progressed. We’ve worked hard for him to play tougher and really take pride in owning the paint. To his credit, he’s risen to the challenge. He has a soft touch from ten feet and in which is a nice weapon to have from the post position.

Josh McCormick, 6-3 junior forward-center: “Josh is currently playing the role of sixth man for our team and has ended up making some very big plays this season. While he may not start the game, he is often on the floor as the game comes to a close. He has good court sense and mixes well with his teammates. His shot is solid from the outside and he can also get to the basket.”

Alex Dehzad, 5-10 junior guard: “Alex is a bundle of energy and plays with more determination than the average high school kid. He’s tough and will put everything on the line when he steps on the court. He is a fan favorite – you’ll hear our student section yelling Chooch, his nickname, when he gets on the floor.”

Owen Schnaible, 5-11 junior guard: “Owen brings a mixed bag to our team. He can defend the opposing team’s best player, hit the mid-range jumper, and make his way to the hoop for layups. He competes and brings energy. He is another gifted athlete on this team and much of what he brings cannot be found in the scorebook.”

Loren Castro, 6-4 senior forward-center: “Loren is the tallest and most physically intimidating player on our team. He’s battling for minutes in the paint right now, which can be frustrating for a returning player, but Loren has resolve. His size and toughness help us and he is important to our team. I expect him to contribute some valuable minutes as we march through the league season.”

After a brutal non-league slate, the Wolves (5-6, 1-0) are battle-tested and ready to fight for a Vine Valley Athletic League title.