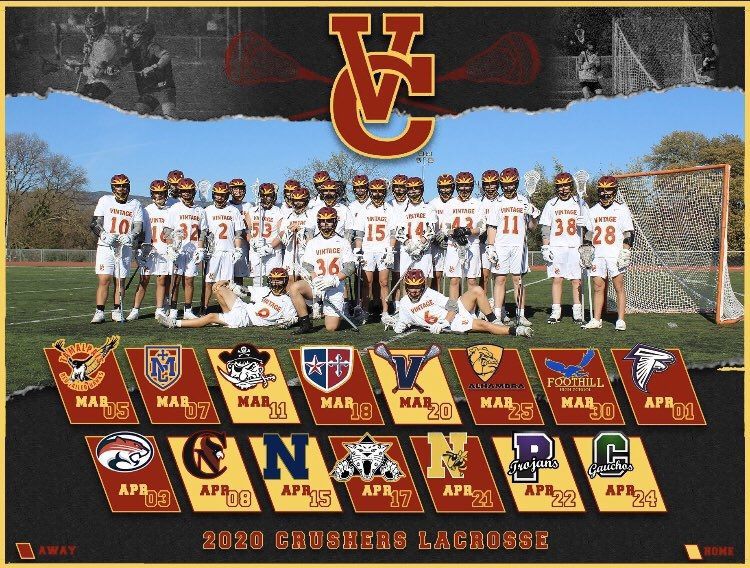 A poster shows the 15 games on the Vintage High boys lacrosse team's regular-season schedule. The Crushers played only three before their season was canceled due to COVID-19 restrictions.

When a high school is offering lacrosse for the first time, the freshmen are as experienced at that level as the seniors on the team.

The four ninth-graders on this year’s first-ever Vintage boys squad, however, came in with so much experience that they scored a third of the team’s goals and had half of its assists.

When the season was canceled after three games due to coronavirus pandemic, freshman Donovan Waters was leading the Crushers with 8 goals and had 2 assists, senior Bryce Eade had 7 goals, junior Jackson Waters had 4 goals and 5 assists, freshman Tanner Low had 4 goals, freshman James Venegas had 3 goals and an assist, and senior Matt Commander had 2 goals.

Sophomore goalkeeper Sidney Burch racked up 29 saves. He came in having played five years for the Force and three for 101 Lacrosse and G3 Goalie Academy.

The Crushers’ three games were all against members of the Marin County Athletic League.

“Tamalpais was loaded with senior players but was shell-shocked after we took the lead in the first half,” David Eade said, “but we were unable to stop the landslide of penalties that put us two men down for almost the entire second half. But our aggressiveness for ground balls, ball possession and successfully clearing the ball led to our success. We did not lose that game. We simply ran out of time.

“Against Marin Catholic, the favorite for league championship, we were able to stay competitive for the first half but being short of experienced players made it difficult to compete with them.”

But at home against Drake on March 11, Vintage more than doubled its scoring output up to then with a 17-2 rout of the Pirates.

“During our final game our players were able to demonstrate their ability to score at will against a team that had experienced players,” the coach said. “We made it a requirement that, after running up 12 points, players pass the ball and hold their shots. So our first-year players began to shoot on goal and did so successfully.

“Albert Savala, who had not picked up a lacrosse stick until this year, scored his first goal and Noah Gulbransen had several attempts on goal, so the season was successful. Alec Umutyan, Jackson Waters and Donovan Waters were key players on offense who helped make us contenders this year. You can’t win a game with one player because lacrosse is truly a team effort. Alec Roberts was also instrumental this year in face-offs; it surprised Tamalpais and helped put us out in front during the first half. Dylan Smith was able to successfully face off after just two weeks of playing lacrosse, something almost unheard of in high school lacrosse.”

David Eade played lacrosse for Skyline High in Oakland, with which he attended the Princeton Lacrosse Camp for 10 days. He also played for the Golden Gate club team for four seasons and was an assistant coach at Skyline and Berkeley High. He has been coaching in the Force teams of the Napa Junior Lacrosse Club in recent years.

He said the Crushers had 11 players who had each more than five years of club lacrosse experience, and several helped his Napa Force Varsity Boys win the Northern California Junior Lacrosse Association championship last summer.

“We didn’t expect to be the champion this year, but we expected to have a team that would compete with the best of what the league had to offer,” the coach said. “Matthew Commander worked with the defense to intimidate and control many of our opponents. He was able to stop some of the top offensive teams in the VVAL with his aggressive play. His work with Ryan Mooney to intimidate and take the ball away from opponents was outstanding, and Bryce Eade added 3 takeaways in the first two games and was a valuable asset on both defense and offense.

“But we were short three top players, which would’ve really helped in the third and fourth quarters.”

Coach Eade said two-thirds of the Crushers had never played the sport before.

“While had a fair number of returning players, it was challenging to the new players to be able to step up for the first time holding a stick and to play at this level,” he said. “But the team always rallied and put in an amazing effort. I was so impressed with every game. The boys never quit and always gave it 100%. There is nothing more that you can ask for as a coach.”

Commander signed with the University of Nevada-Reno in September, after helping lead the Force Varsity Boys to their NCJLA title as a defender. Coach Eade said Bryce Eade – who has 10 years of Napa Force experience and two with 101 Lacrosse – also looks to play lacrosse at a four-year college, but will attend a junior college first while training for lacrosse.

“I was hoping many of my seniors who were new to the game would be able to have an entire season for their first year as players to help instill the love of the game,” Coach Eade added, “and to let them know that if they continue with their skills, they can play at a club level in college as well.”

But the Crushers played only a fifth of their 15-game regular season before their season was suspended, and then canceled.

“As a coach, perhaps the most difficult task that I have had in my 14-plus years of coaching was handling the loss of this season due to circumstances beyond our control,” David Eade said. “So much planning and effort had gone into this year – 12 years of planning and negotiations with school officials, district officials, league officials, field superintendents – all so we could start this season legally. But at the same time we are also thankful because with the pandemic if we had to wait for this year for authorization, we would have many more years for the sport to become a varsity sport.

“We owe so many players and officials our thanks for believing in us, working hard to execute our goals. I can’t be more proud of the effort that our boys displayed this season. While things didn’t go quite according to plan, we are pleased with how these boys performed.”

Eade, a chiropractor, spent the first few weeks of the COVID-19 lockdown listening to webinars on the Paycheck Protection Program and Economic Injury Disaster Loans. It’s been hard for him to say whether he’ll be back to try to guide Vintage to its first full lacrosse season next year.

“It’s difficult to say whether I will be coaching next year. As a business owner, it’s difficult to change so much of my schedule,” he said. “But I do so greatly value the time I have with my players. I feel it’s important to contribute to these young men. Nothing is more exciting or worthwhile than instilling confidence in young men when you can show and demonstrate how successful they can become when they apply themselves. It’s up to us coaches to provide them the best game plan possible for their success. But either way, the coaching staff at Vintage will be followed up by knowledgeable people.”

Karolina "Karlie" Wells, today's Senior Spotlight subject, has been a staple of the Justin-Siena girls lacrosse program since she was a freshman. The three-sport athlete was voted the Braves' team captain this spring.

A poster shows the 15 games on the Vintage High boys lacrosse team's regular-season schedule. The Crushers played only three before their season was canceled due to COVID-19 restrictions.