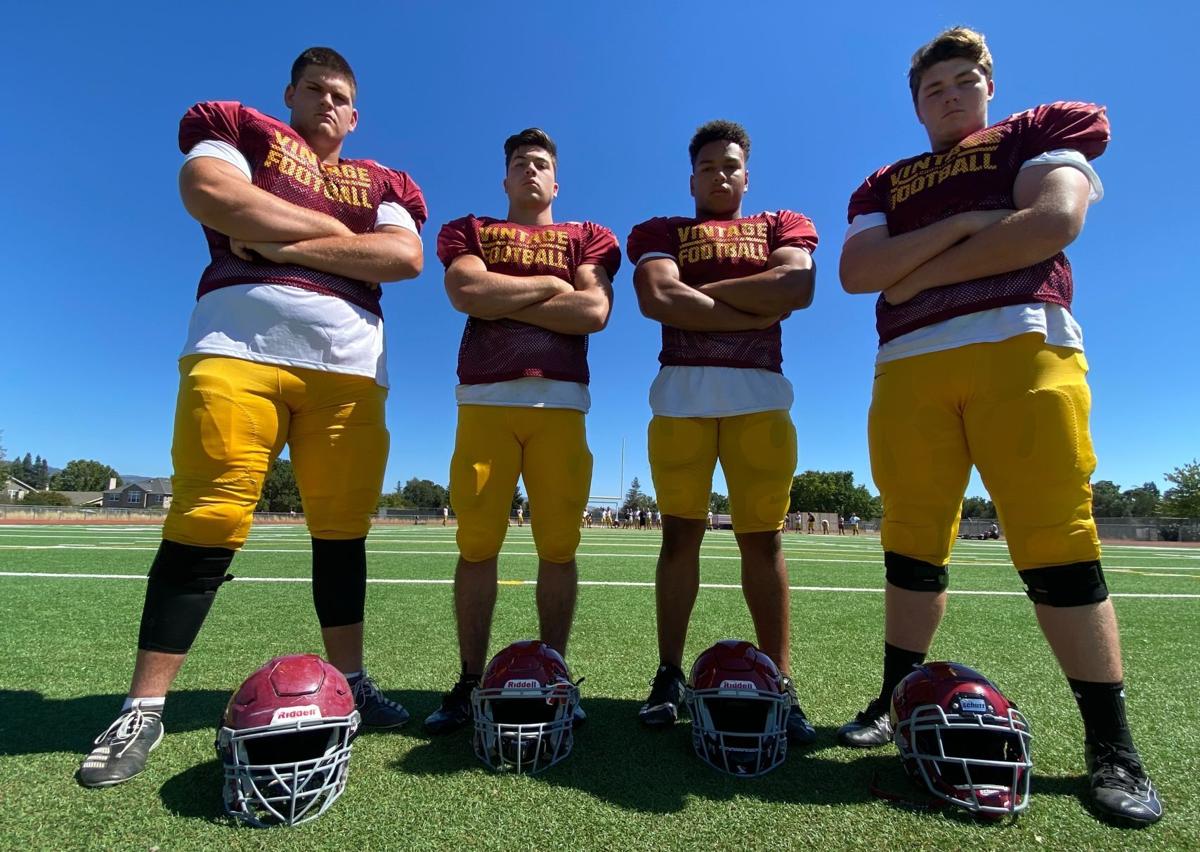 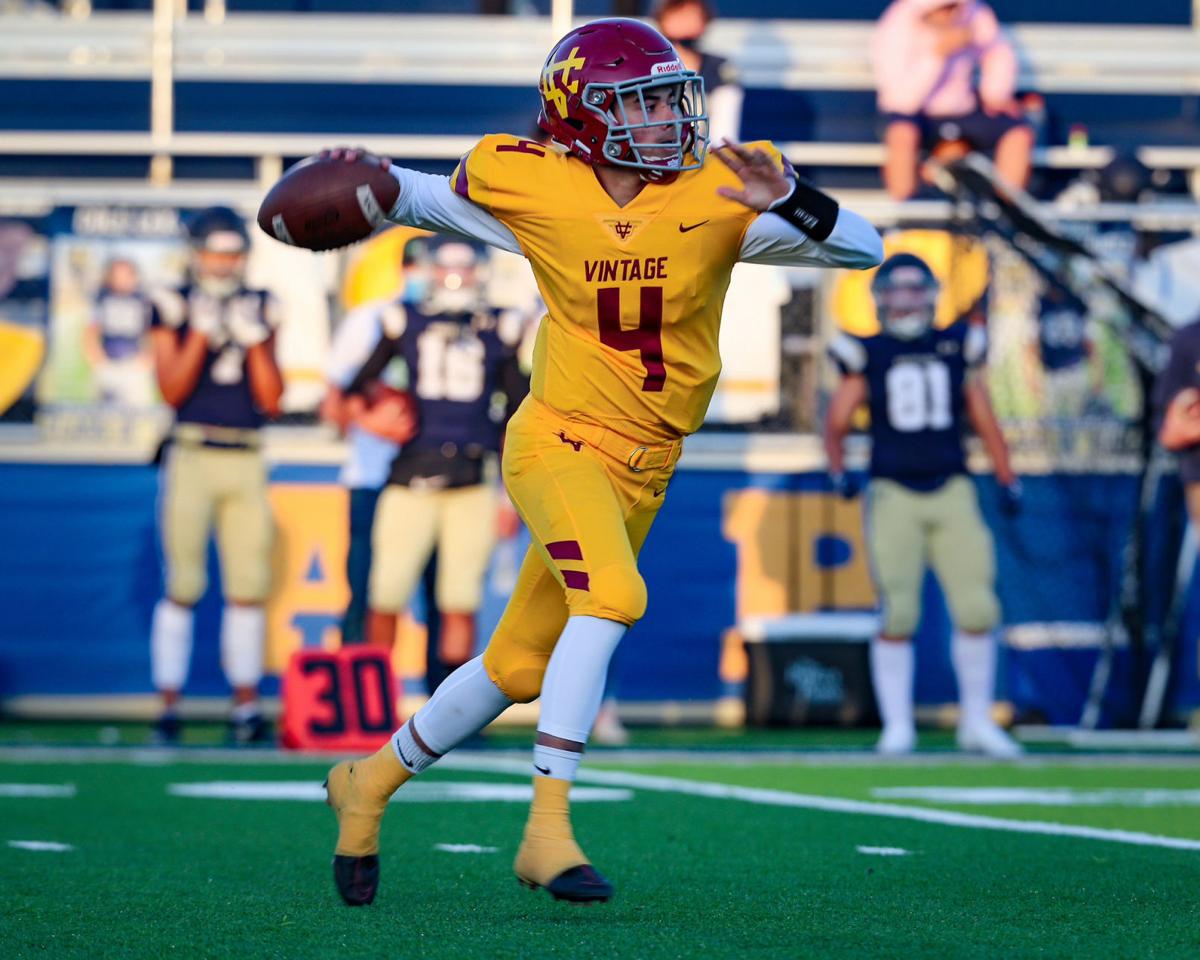 Vintage High quarterback Tytan Bradley rolls out before completing a pass for a first down against Napa High during Big Game XLIX at Memorial Stadium on April 16. 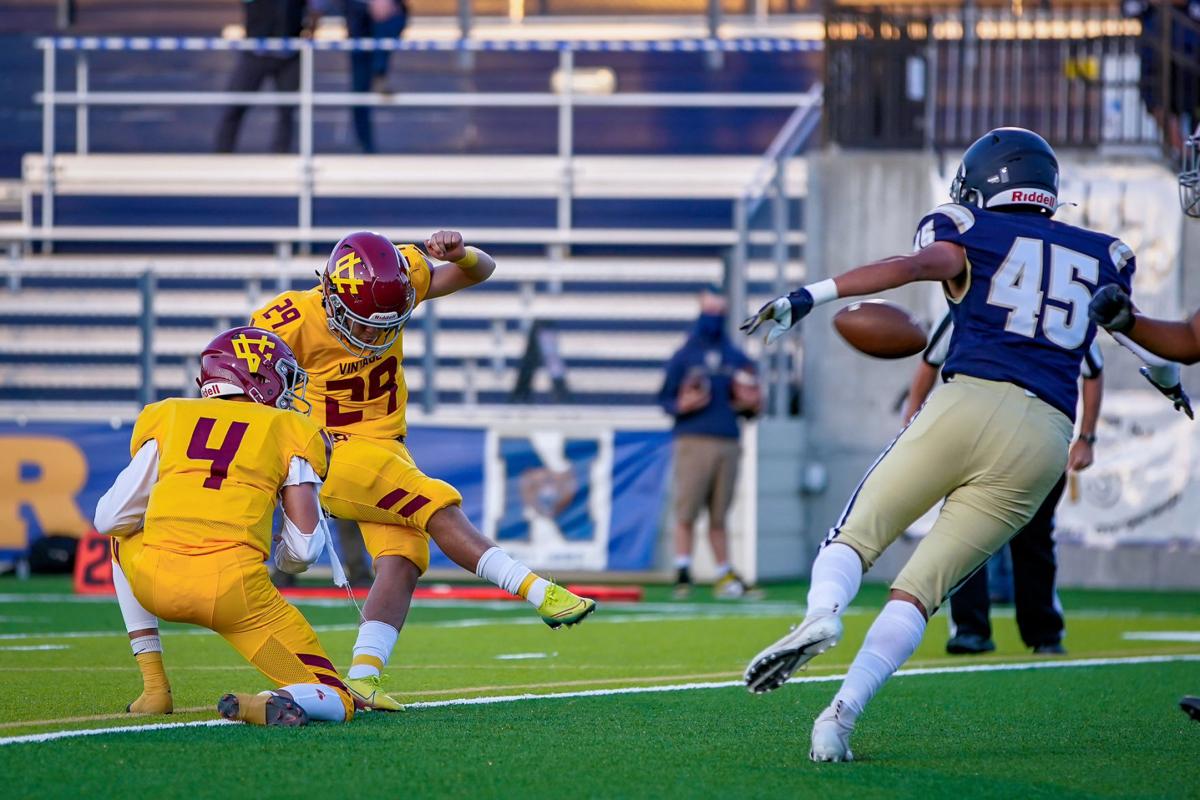 Vintage High kicker Aaron Ballines launches an extra point off the hold of Tytan Bradley to tie Big Game XLIX in the first quarter, 7-7, as Napa High's Jose Padilla (45) tries to block it on April 16.

It probably wasn’t any more fun to play the Vintage High football team last year than it was to be a Crusher in the era of the COVID-19 pandemic, putting together a 6-0 season of only Vine Valley Athletic League games and not being able to face against other dominant teams in the playoffs.

Those who weren’t seniors have come back determined to have that complete experience, including a long playoff run.

“I feel like it’s a continuation from last season because we didn’t really get to finish our season out,” said senior center Preston Gullum, one of several Crushers who plan to play in college.

Added fellow third-year varsity offensive lineman Louie Canepa, “We had like a two-week break from practices after our last game (April 16). We had team parties and swam a lot, but still worked out (in the weight room). But in the third week we went back to work and now we’ve been on the field every day, so it’s been like two seasons together. We’re excited to play good teams this season.”

Gullum has since played Vintage High and American Legion baseball.

“Preston is a smart, intelligent player,” head coach Dylan Leach said. “We moved him to center last year because we were losing Jack Odell, a three-year starter. We also needed a guy who could handle noseguards in a one-on-one situation and with his size and his athleticism, Preston’s able to do that, and to tell the guards and tackles what to do if needed.

"Contrary to what some people think, football is not a sport you can be dumb in. If you speak two languages and come out for football, you’re now going to have to learn a third one. We work very hard with our guys to have a football IQ and Louie and Preston have really taken that extra step and I think this season will be the culmination of that. They’ve done a really good job of learning the game and then applying their skill level to make themselves better in that way.”

Canepa played baseball for more than 10 years before giving it up after his sophomore year to avoid the risk of injury. He said he might try the shot put and discus in the spring, but he’s focused on having a good season and increasing his already lofty stock in the eyes of college football recruiters. He already talks like a college scholar.

“Louie has had to step outside the box during his recruitment process, and his confidence in his abilities and his stature are now complete,” Leach said. “He was on the radio (KVON’s SportsVine talk show in early August) with Kent Fry and did the hour-long segment by himself, with no coaches because we were at a 7-on-7 tournament. That’s something he wouldn’t have done as a sophomore or maybe even as a junior. Now he’s one of the better leaders we’ve ever and we’re really excited for him. He’s really taken that bull by the horns and become our vocal leader. He makes our practices insanely tough. There’s no lackadaisical piece of our practices anymore because of guys like him and Preston.”

“These guys lead not only by example but they’re vocal, and the kids have no choice but to battle and compete or else they’re going to get lined up against one of those guys and I know that’s not what they want,” the coach said.

Canepa is especially looking forward to Friday’s opener at San Ramon Valley — a program that ended the 2018 Vintage squad’s 10-3 season with a 14-3 win in the North Coast Section Division I semifinals, along with next week’s home opener against El Cerrito and a Sept. 10 date at perennial power Cardinal Newman.

“We want a challenge,” he said. “Our first three games will definitely be our toughest, at least until playoffs. We had the mentality of carrying the torch into the next year and last season we did that but couldn’t really show a lot because we only played six games. This season, there’s still a mentality to be better and better, 100%.”

Added Gullum, “Last spring we proved our hard work throughout the year beforehand, and how hard we were lifting and running plays every day in the summer (of 2020) and just trying to get better at the little things. It’s a testament to Leach and our O-line coach, (Andrew) Hall because they put that mentality in us and we were able to finish our blocks and execute.”

A big question mark will be how senior quarterback Tytan Bradley will perform through a full season after getting three starts last year, including in the 35-7 Big Game win over Napa High, and backing up then-seniors Jacob Aaron and Bill Chaidez in the other games.

“He definitely has some pressure on him, but I think he can do it,” Canepa said.

Leach said in two weeks ago that Bradley was still batting fellow senior Jacob Ray, with whom he shared the position on the JV two years ago, and 6-foot-2, 205-pound sophomore Elias Alvarez, who quarterbacked the JV team last spring.

“I will end up playing all three, something I’ve done throughout my coaching career,” Leach said of his signal callers. “They all have different attributes that they do well and I’ll take advantage of each one of them. Elias is a little more of a downhill, hard runner, whereas Justin and Tytan have a little bit more elusiveness. Elias will probably start at middle linebacker and at tight end if he’s not at quarterback, and Justin will have an opportunity to start at safety and Tytan at corner. We’ve got a three-headed monster at this point.”

Ray didn’t play at this past spring because of a strained Achilles’ heel. Davis missed most of the season due to injury, but showed his defensive prowess in the Big Game and will likely run the ball this season.

“We’ll probably be 90% a running team this year and I’ll be catching the ball a lot, too,” Davis said.

Leach said Davis is “one of the better players in Northern California” and looks for him to have a breakout season.

“His work ethic is absolutely second to none,” Leach said. “He’s put himself in a position through the weight room and through his recovery skills; he’s a guy that ice-baths repeatedly and stretches and goes to CTS and does all these other things to make sure his body is where it is. He and his mother meal-prep every single day. He does not put something in his body that is not real food. He’s an amazing example for our program. The weight room is probably 25% of what your body actually looks like and 75% is the kitchen, and that’s where he excels.”

Whereas Smith, the spring 2021 Napa County Player of the Year, can break tackles and outrun defenders, Davis is similar but will probably be the Crushers’ best receiver, Leach said.

“We can put him out wide. When we played in the passing tournaments, he had more touchdowns than anyone else,” Leach said. “Defensively is probably where he’ll probably get the most standout situations. Last season you could see glimpses of it when he made it back for the Napa game, the fourth-and-1 down by the goal line right before half. If you look at that play, he went through (two of Napa’s standouts) in a double-team situation and won the battle. He’ll be our leader on defense this season.”

On the line, Leach said 6-foot-5, 250-pound senior Aaron Gilmet trimmed down and did well at the San Jose State camp, while juniors Owen Tretheway, Jack Davidson, Steve Downing and Alexis Castillo and 270-pound freshman Drake Sampton are also in the mix.

Leach will be coaching the secondary, where he said he started his coaching career.

Returning at kicker is senior Aaron Ballines, who will also share punting duties with Schaumkel.

Vintage High quarterback Tytan Bradley rolls out before completing a pass for a first down against Napa High during Big Game XLIX at Memorial Stadium on April 16.

Vintage High kicker Aaron Ballines launches an extra point off the hold of Tytan Bradley to tie Big Game XLIX in the first quarter, 7-7, as Napa High's Jose Padilla (45) tries to block it on April 16.