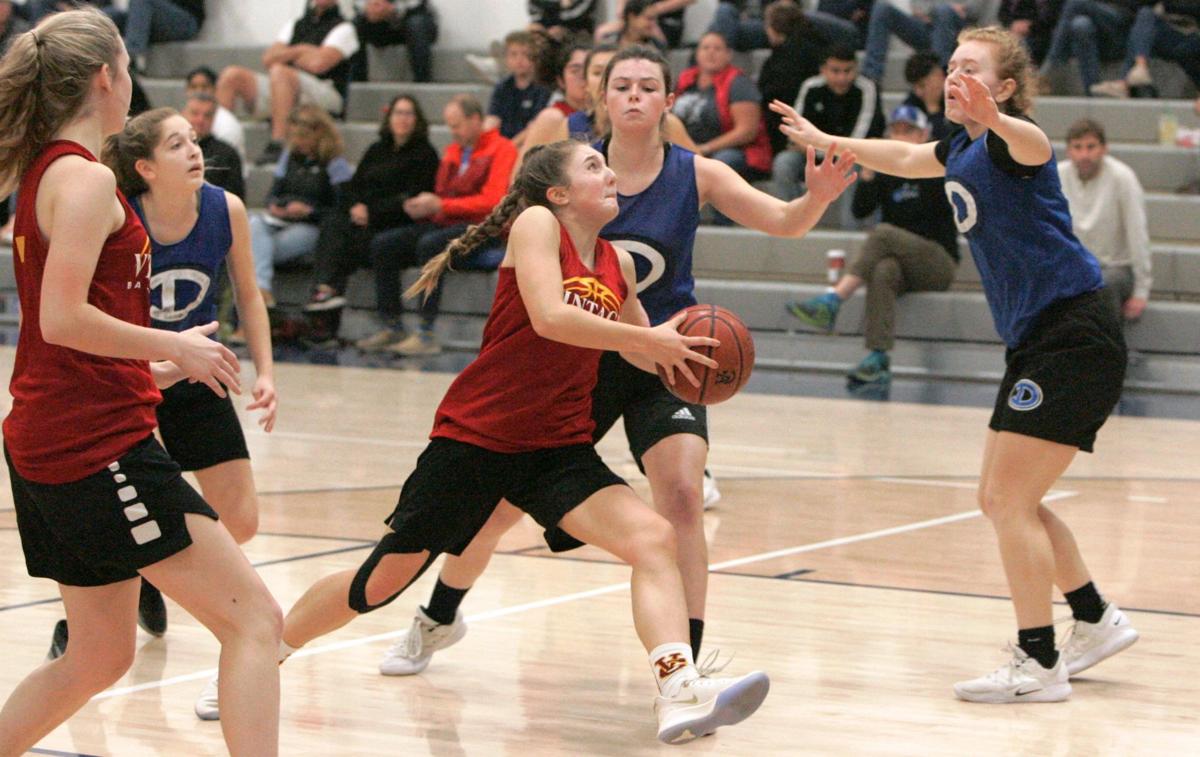 Vintage's Liv Hedburg drives to the basket against Davis during a Justin-Siena Jamboree scrimmage on Nov. 16. 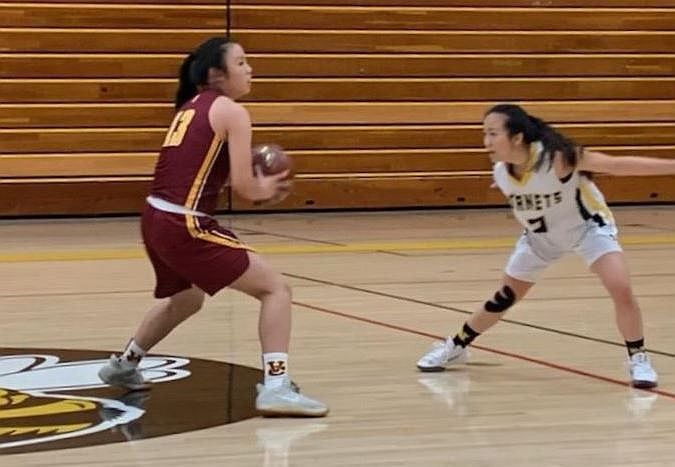 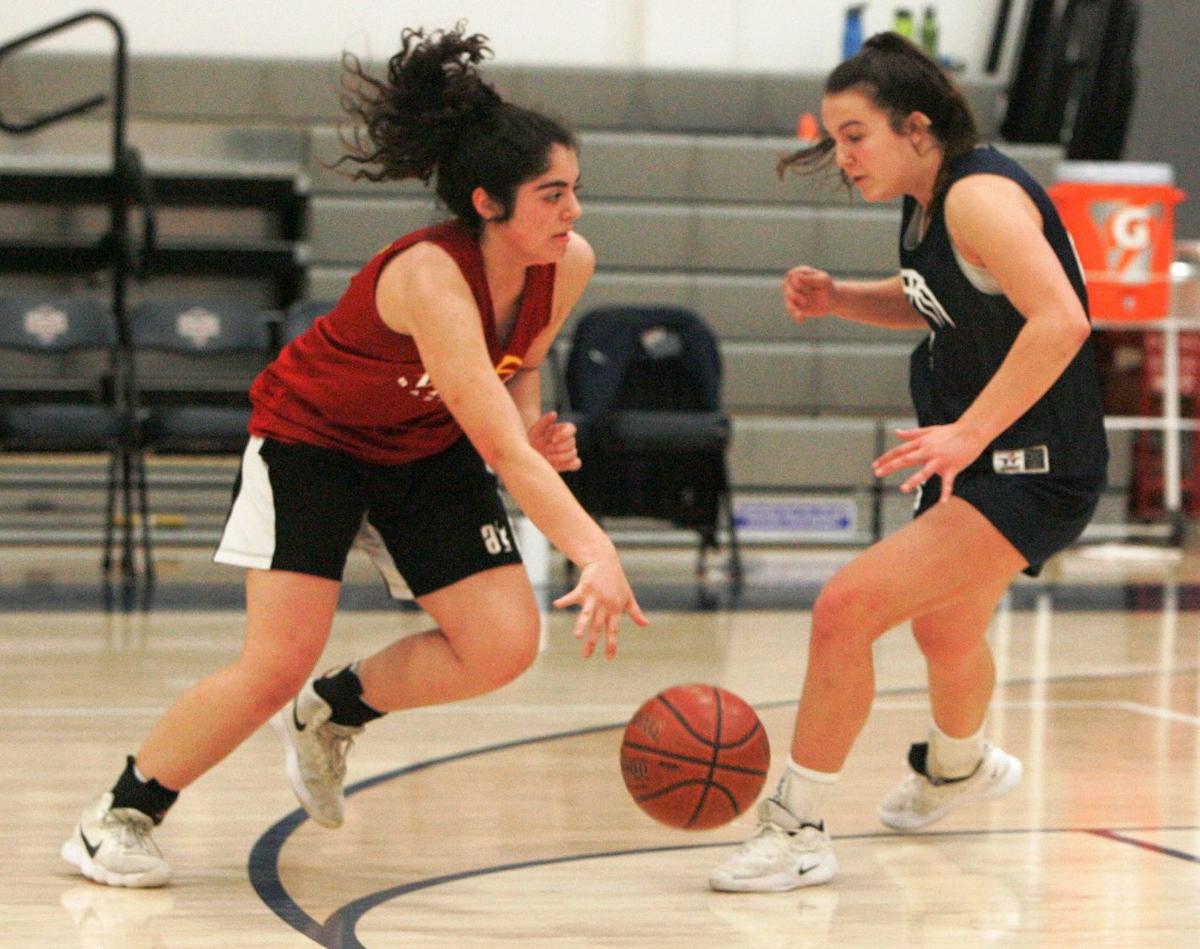 Vintage's Victoria Solorio drives the lane against Justin-SIena during a Justin-Siena Jamboree scrimmage on Nov. 16. 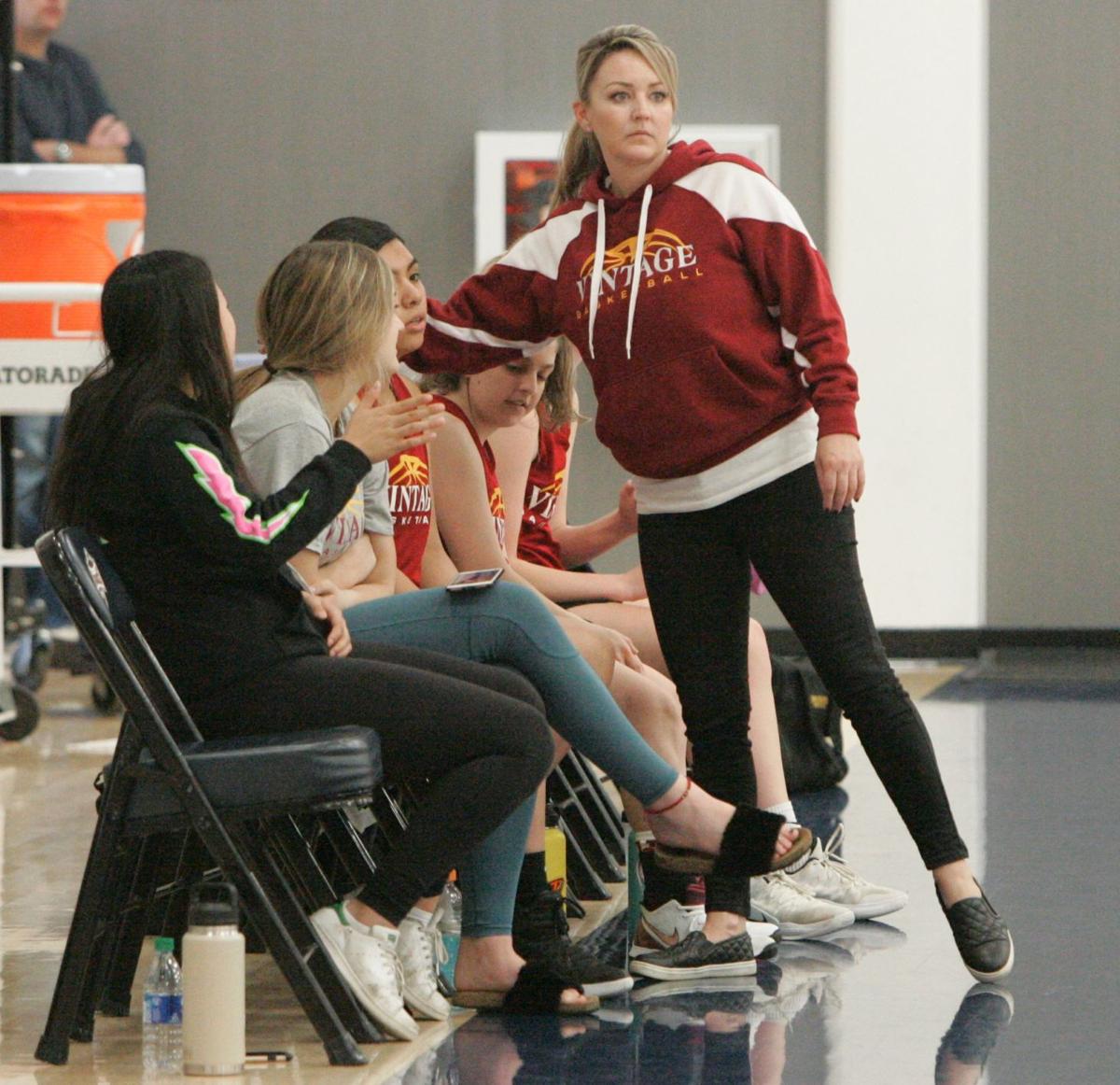 Vintage assistant coach Joy Dahl picks a player to sub in against Davis during a Justin-Siena Jamboree scrimmage on Nov. 16. 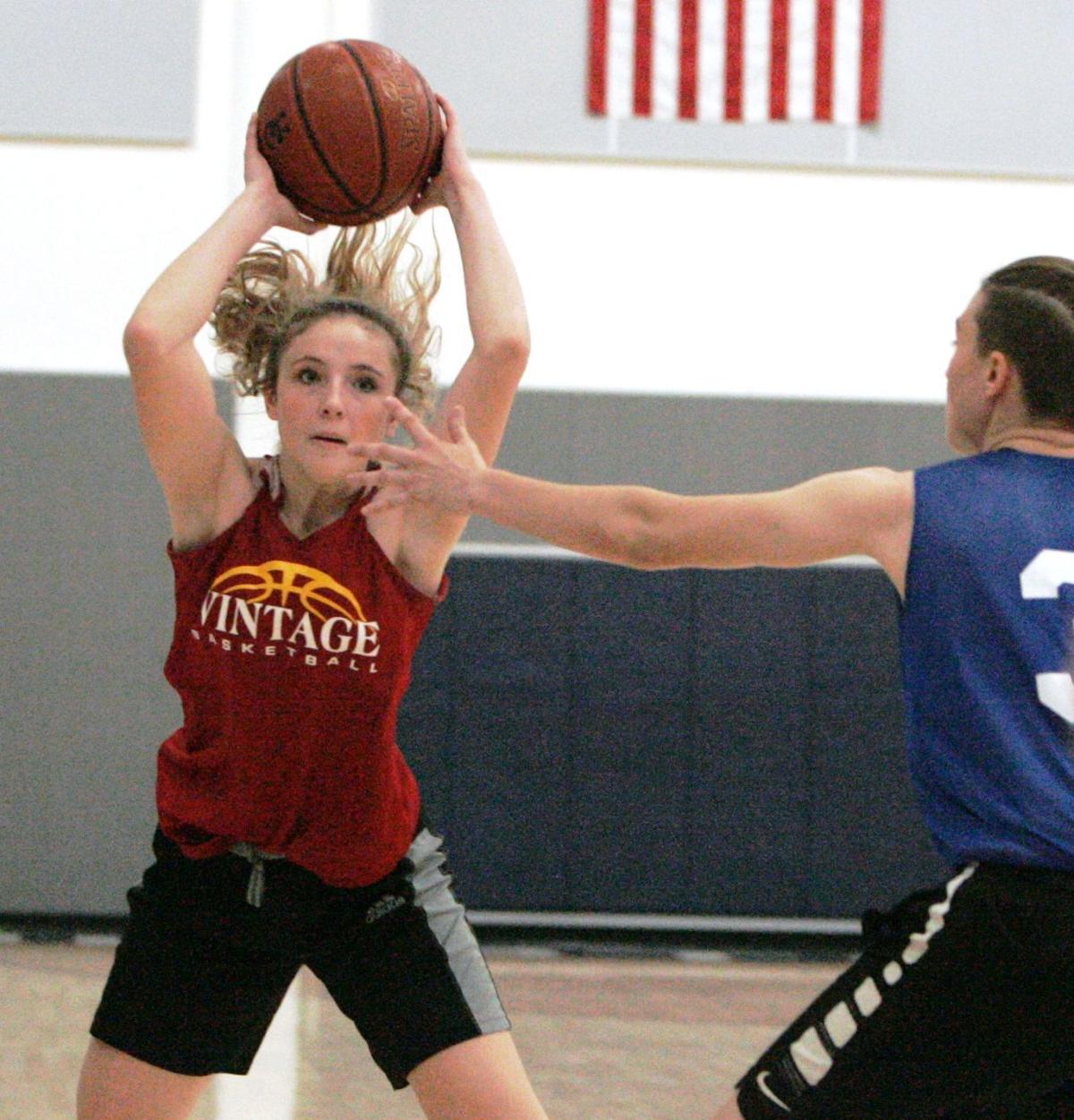 Vintage's Eden Wood looks to make a pass against Davis during a Justin-Siena Jamboree scrimmage on Nov. 16. 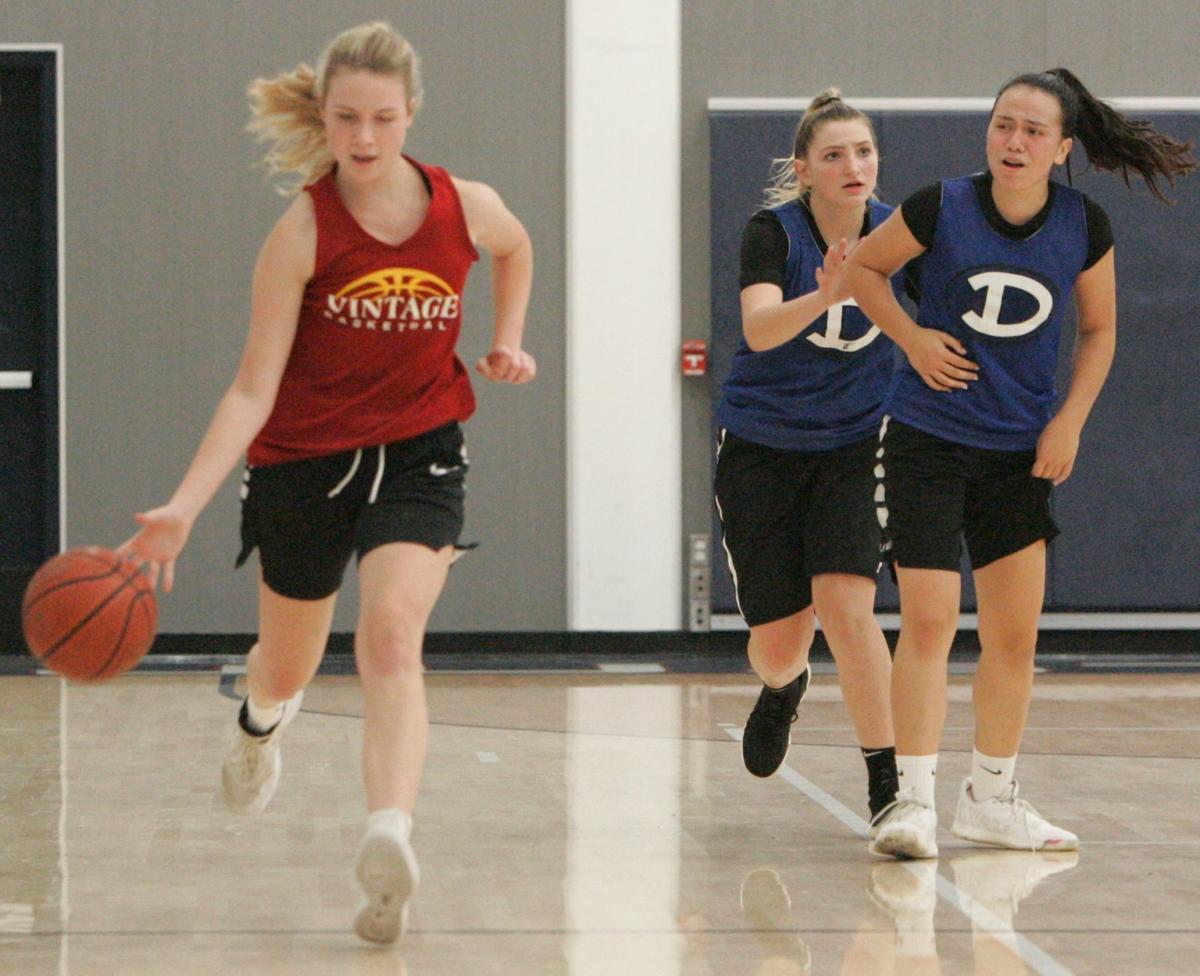 Vintage's Liv Hedburg drives to the basket against Davis during a Justin-Siena Jamboree scrimmage on Nov. 16.

Vintage's Victoria Solorio drives the lane against Justin-SIena during a Justin-Siena Jamboree scrimmage on Nov. 16.

Vintage assistant coach Joy Dahl picks a player to sub in against Davis during a Justin-Siena Jamboree scrimmage on Nov. 16.

Vintage's Eden Wood looks to make a pass against Davis during a Justin-Siena Jamboree scrimmage on Nov. 16.

The Vintage High girls basketball team no longer has its Big 3, a trio that graduated with a combined 11 seasons of varsity experience after leading the Crushers to Monticello Empire League and Vine Valley Athletic League titles the last two seasons.

Alyssa Andrews, the 2018-19 Napa County Player of the Year, fellow four-year varsity starter Kate Ilsley, and Nicole Gleeson, now playing NCAA Division II ball for Dominican University of California in San Rafael, are gone along with last year’s other five seniors. The group won Vintage’s first league titles in 33 years and got the Crushers back in the section playoffs for the first time in 11 seasons.

Only four players return to the varsity this year, six others were on the JV last year, one hasn’t played in two years, and another is a freshman.

But head coach Joe Donohoe and assistant coach Kelsey Rodriguez, a former Vintage standout from the class of 2009, are back to lead the staff for a fourth straight season and keep the Crushers on a roll. Joining them from last year’s JV staff is 2001 Vintage basketball alumnus Joy Dahl.

“Both of these ladies were tremendous players here at Vintage,” Donohoe said of the former Kelsey Zeller and Joy Perez.

Randy Pridmore has taken over as JV head coach while Bailey Loban, a former Vintage player from the class of 2018, leads the freshman staff with assistance from Vintage Athletic Hall of Famer Dave Ilsley.

“We graduated a big group of seniors last year that had put in the work to get the program on the map,” Donohoe said. “They were not only phenomenal young ladies, they were extremely hard workers. They set a standard and left a legacy for this young group to try to follow.

“It’s an exciting time at the varsity level, with lots of opportunity for the new players to work their way into the rotation and carve out a role to help us try to earn a third league title in a row and another postseason appearance.”

Donohoe compares this year’s young group to the one he had in 2016-17, and hasn’t changed anything scheme-wise, offensively or defensively.

“We have continued to stick with our philosophy of defense, hard work and commitment to conditioning as our foundation,” he said. “However, with a young group, we need to improve on our fundamentals considerably. I can see this group improving daily, which is all you can ask for as a coach.”

Here is a look at the players, with comments from Donohoe:

Morgan “Mo” Groves, senior captain: Now in her third varsity season, she “is a very dependable player, rebounds well, and has a calming influence on her teammates when the going gets tough. She’s an accurate mid-range shooter and is also somebody who works very hard at practice.”

Perla Bautista, senior: “She is the perfect example of ‘don’t give up.’ She didn’t make the team her junior year, however, she worked hard all summer and earned a spot on the roster this year. Perla is very strong and is a force inside on the glass.”

Maggie Anderson, senior: The daughter of longtime Vintage baseball head coach Rich Anderson is in her fourth year with the program. “She is the definition of committed. She’s always early and she never misses anything, optional or mandatory. She has developed into a very good 3-point shooter and continues to practice hard every day.”

Victoria Solorio, junior: A varsity returner, she is a “very strong rebounder and scorer in the paint and a great teammate, and has the advantage of knowing what it’s going to take to be successful as a returner.”

Ellie Savage, junior: The varsity returner is an “outside threat with the 3 and continues to work hard on her defense. She’s another player who can help steer the younger players in the right direction to be ready for league play.”

Olivia Kerr, junior: Having led the JV team in scoring last year, “she is another good outside shooter and has really been making improvement early this year.”

Eden Wood, sophomore captain: Called up to the varsity in midseason last winter, “Eden has earned the right to be a team captain this year by her consistent work ethic in practice and her determination on the court. Her tenacity on the defensive end particularly sets the tone for this group.”

Kate Kerr, sophomore: “She has established herself at the varsity level quickly. She has a strong inside presence offensively, as well as the ability to knock down outside shots.”

Liv Hedberg, sophomore: “She is an amazing athlete. She has only been playing basketball for a few years, but she’s fast, aggressive and willing to learn. She is another player who is improving daily.”

Shelby Morse, sophomore: After playing on the freshman basketball team last winter, she helped lead the varsity softball squad to a second-place league finish as its pitching ace and fifth-best batter. “She has a steep learning curve going from frosh to varsity, however, she is responding to the challenge very well. She is a tremendous athlete. I have no doubt she will be someone who gets better quickly.”

Ariel Miller, sophomore: As a transfer, from crosstown rival Napa High, she can’t play in games until January. “Ariel is a very skilled player who has continued to work hard in spite of knowing she can’t play for another month, which is a testament to her commitment to the team.”

Lizzie Qui, freshman: Like Tyler Oda with the Napa High boys last winter, Qui “was handed the ball in June as the varsity point guard and has done an outstanding job. She has shown she is up to the challenge and is very coachable. Her court vision is fantastic, which will make everyone better.”

The team manager is junior Chantal Nava, whom Donohoe is “thrilled to have helping the team out.”

“This year has a story waiting to be written, with eight new players at varsity level,” the coach added. “I really don’t have a feel for it yet. I know that we will play with effort and intensity on a nightly basis. If we can play for each other and keep focus, we have a chance to have a solid year. I’m excited to see where the journey takes us.”