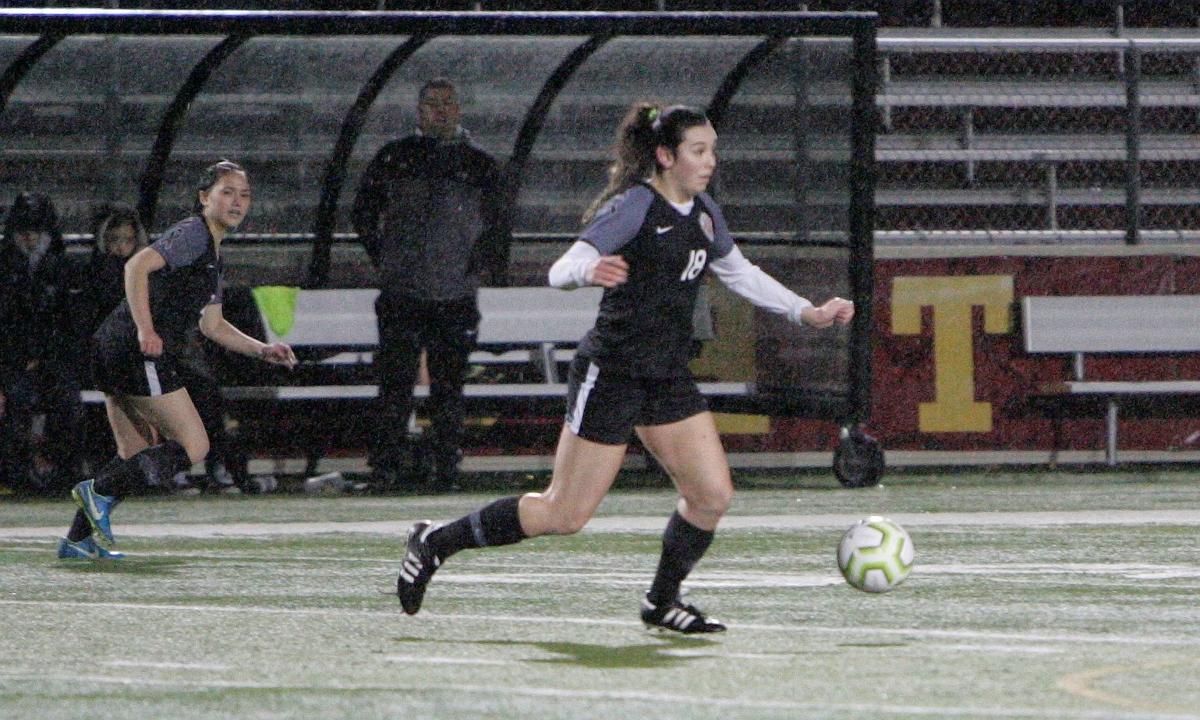 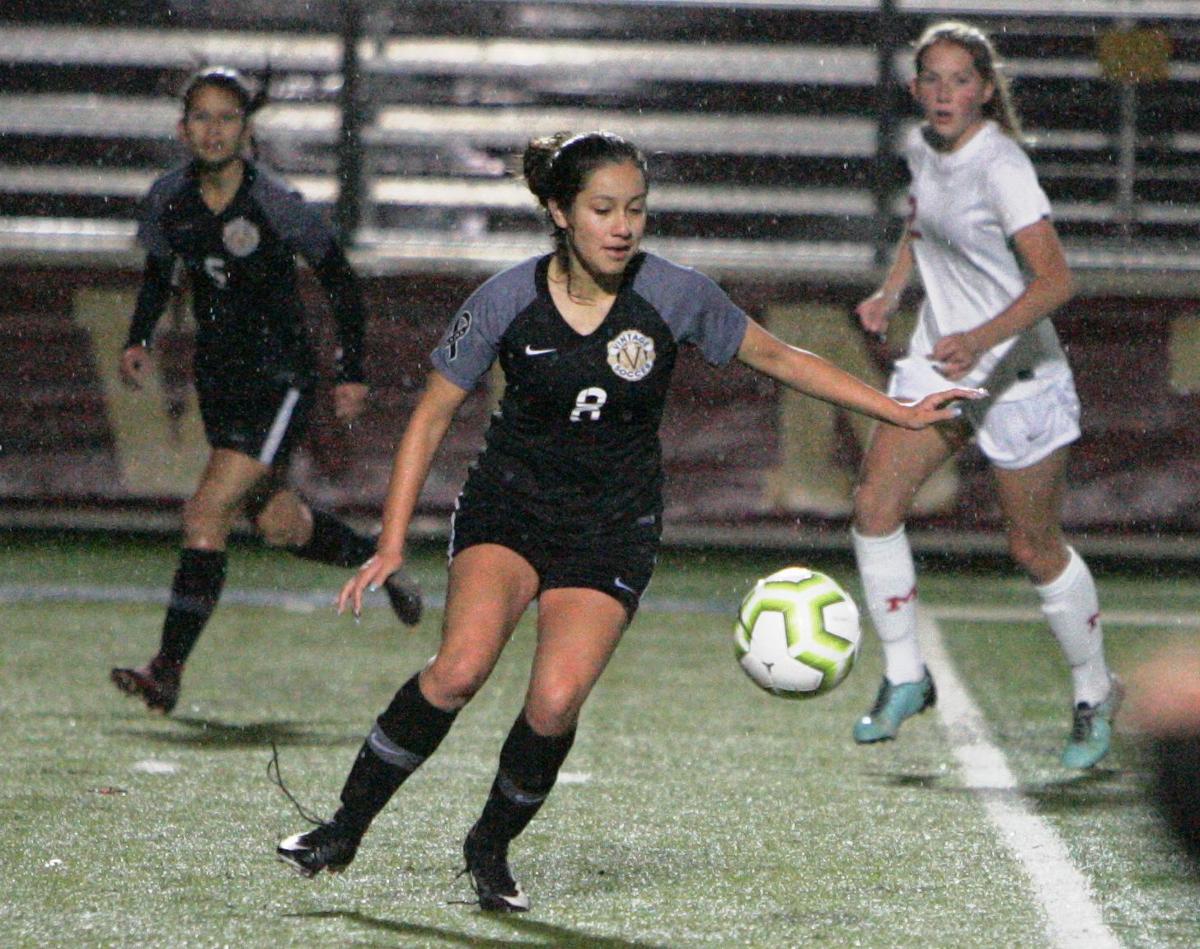 Vintage senior Kasandra DeHaro controls the ball in the midfield against Montgomery in the rain at Memorial Stadium on Nov. 26.

Last year’s Vintage High girls soccer team could have bragged that its six overall wins were the most by any Napa County winter team during the 2018-19 school year, but four of them were in nonleague play.

In hopes of a better league faring, Vintage scheduled a tougher preseason this year. Of its nine nonleague opponents, six made the playoffs last year.

Going into Tuesday night’s game at Vanden, Vintage (2-1) is led in scoring by Nayeli Cervantes with four goals. The senior has scored in all three games, a 7-1 home victory over Vallejo, a 2-1 win at Wood, and last Tuesday’s 7-1 home loss to Montgomery.

Wagner has three goals, all in a hat trick against Vallejo, and junior Sophia “Pia” Menzel and sophomores Madisyn Flohr and Bianca Avalos have each scored once.

Vintage has been without Hernandez and DeBow due to club soccer commitments, and Sittler and juniors Mary Deeik and Tamara Hernandez due to their cross country seasons just wrapping up. Deeik competed in her third state cross country meet on Saturday.

Fourth-year head coach Miguel Ayala needed them against Montgomery, which graduated only two seniors from last year’s North Coast Section Division II champion squad. But he was glad to get the younger players experience against the always tough Vikings.

“Our top scorers from last year, Irais and Maile, haven’t been here and we still somehow managed to score 10 goals, so I’m happy,” Ayala said. “We’ve given up nine goals, but seven were against the section champion.”

After hosting Armijo on Thursday, the Crushers will face four teams that made the playoffs last winter – Berkeley, Clayton Valley Charter, University and Vacaville.

“We’re trying to play a hard schedule, against competitive teams,” Ayala said. “You want to get as much respect as you can (for playoff seeding), even if you lose, because of the teams you play against.

“Montgomery is probably going to be the hardest team we’re going to play against, but I wanted these kinds of tests for us. Even though we weren’t complete, it still gives us a lot of experience and helps us get mentally tougher. I want the girls to know that it takes a lot of hard work to get where those teams are at. Potentially, if we don’t win league and we get seeded low, we’re probably going to play a team like this if we make it to playoffs. We were only down to 13 players today due to vacations, club, cross country or injuries. It is what it is. But we should everybody back (this) week.”

“With people not being here, it’s their opportunity to really shine, to make me have to think about things (by trying to beat out last year’s starters),” Ayala said. “I told them, ‘This is your time to earn your minutes because once everybody gets back, minutes are going to be counted.’ So I challenge the girls that are going to be here to step up their game and take this as an opportunity. I’m proud of them.”

Avalos and Sanchez may go back to the JV team this week, he added.

Though the Crushers have been practicing since only Nov. 4, most of their seniors have played together for seven or eight years.

“This group has been playing together a really long time,” said Ayala, who has many of the Crushers on his club team. “I’m really looking forward to this season because I’ve been around these girls since they were probably 10 or 11. This is a good class.”

They are the first to be coached by Ayala and JV head coach Andrew Engel for all four of their high school seasons.

“This will be my first senior class,” Ayala said. “They know my style.”

Vintage hopes to leapfrog not only American Canyon in the VVAL standings this year, but also defending champion Casa Grande and runner-up Petaluma, the only teams from the league to make the playoffs last year.

“The goal is to win league so we can get a guaranteed spot in playoffs,” Ayala said. “But our goal is always just to compete. If we can compete, I like our chances against anybody. If we can get them to hustle and play hard every single game, it’ll be a successful year.”

DeBow and center back Cuevas lead the back line in the Crushers’ four-back, three-striker 4-3-3 scheme.

“Our defense is going to be solid. We have a lot of pieces that we can put into play until we find out the right four,” Ayala said. “Offensively, I’m hoping Maile has the same kind of year, with Irais leading the way, and Amy, Neilani and Nayeli chipping in so we can spread out the scoring.”

Ayala said he’ll need Menzel’s strength in back, where she plays for his club team, even though she was one of the JV scoring leaders last winter.

“Pia is a very physical player. I know she scored a lot of goals last year on JV, but we have a lot of girls that can play up top, so sometimes you have to sacrifice and play in back,” he said.

Deeik and Flohr came in from fall teams that won VVAL championships, the former in cross country and the latter in volleyball.

“This will be Mary’s third year on the varsity, so I’m expecting big contributions from her,” he said. “Maddie had a great volleyball season and you can tell that her confidence level is up from last year. Physically she’s gifted, a big, strong, fast girl and you can tell she’s got a different demeanor about herself.”

He said Irais Hernandez, DeBow and Wagner will likely be captains.

“One good part about this team is they’re all coachable. That’s all you can ask for. You tell them to do something and the majority of the time, they will,” the coach said.

“That’s what I love about Irais,” he said after the Montgomery loss. “If she was in this game, she would still play like we were winning 10-0. It’s always the same level (of effort) with Irais. I respect that. I hope it rubs off on the other girls. I know that there were some heads hanging tonight, but we need to understand that there were a lot of factors we could not control.”

He also likes the job Magana is doing at goalkeeper. The shoes she’s filling got bigger this fall when last season’s starting keeper, Sam Linteo, was named the American Collegiate Athletic Association’s First-Year Player of the Year after manning the net for Finlandia University in Houghton, Michigan. The Lions finished 6-1 in the ACAA and 11-6-1 overall, beating Mills College of Oakland 1-0 and falling 7-0 to UC Santa Cruz in the Nov. 2-3 ACAA Championships in Santa Cruz.

Vintage senior Kasandra DeHaro controls the ball in the midfield against Montgomery in the rain at Memorial Stadium on Nov. 26.