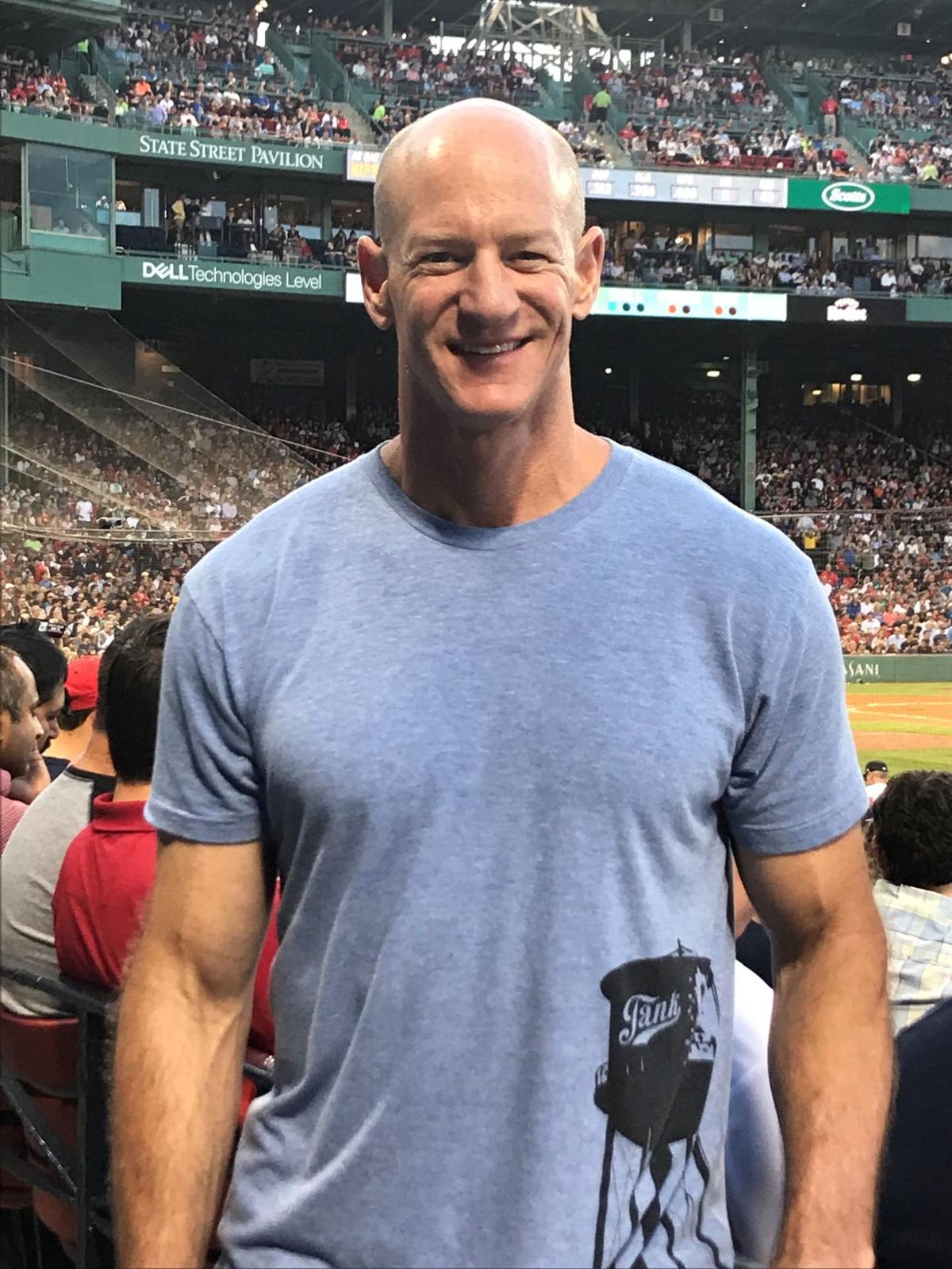 Justin Dragoo, who will be inducted into the Vintage High School Athletic Hall of Fame on Saturday, poses at Fenway Park during a recent business trip to Boston. 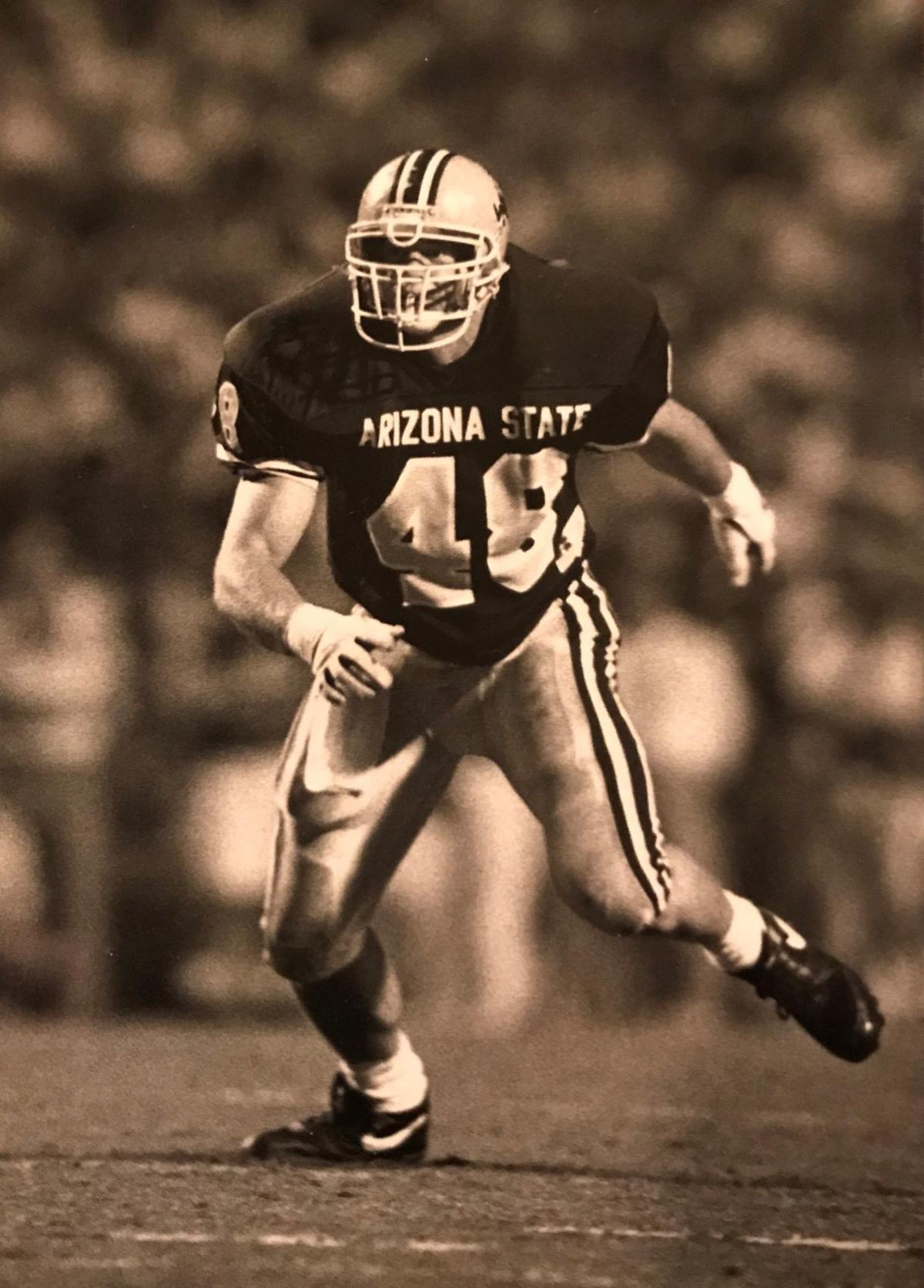 Justin Dragoo, shown when he started at linebacker for Arizona State, spent a year with the NFL’s Carolina Panthers as a supplemental draft pick and one year with the Denver Broncos. He will be inducted into the Vintage High School Athletic Hall of Fame on Saturday. 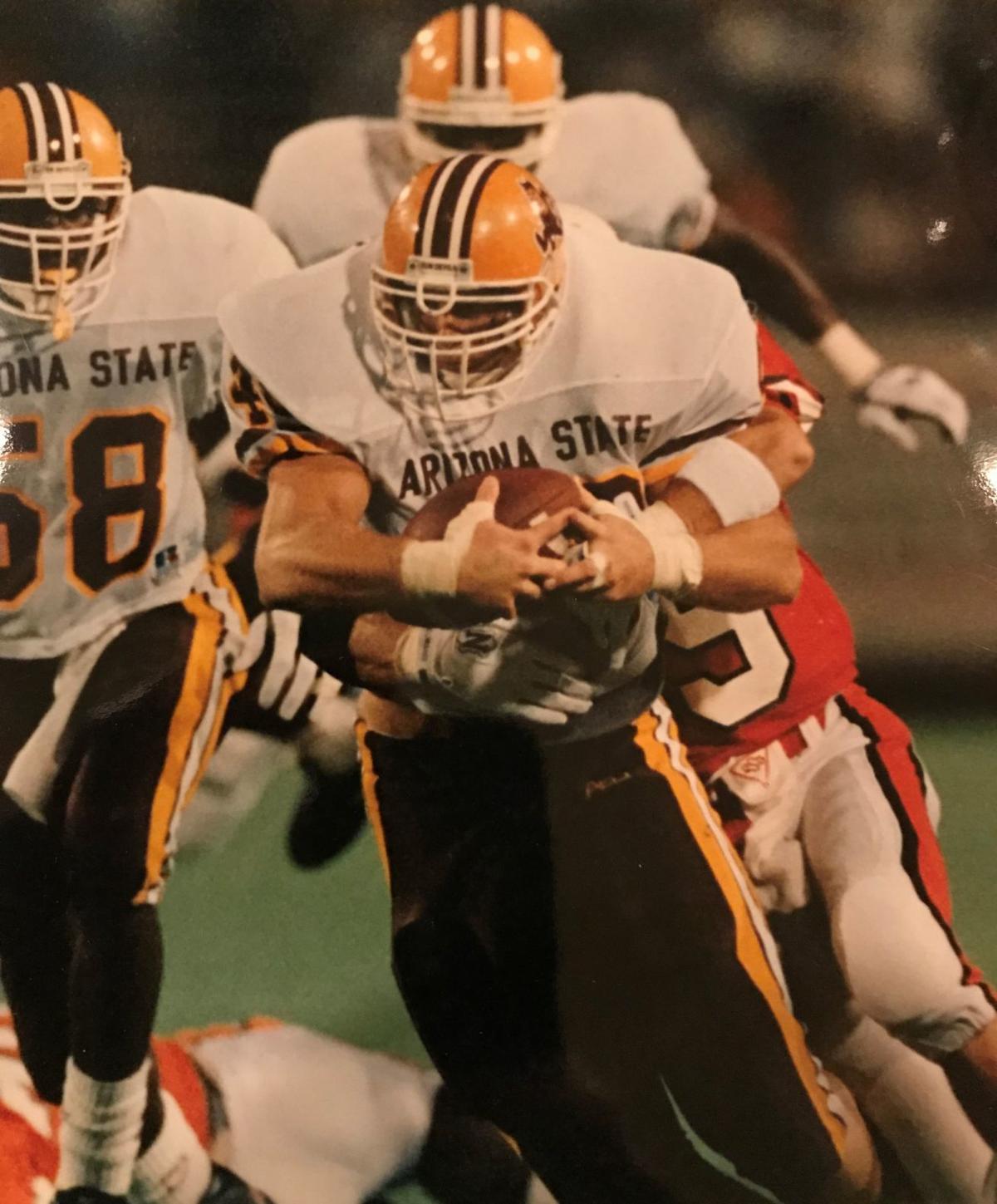 Justin Dragoo, who will be inducted into the Vintage High School Athletic Hall of Fame on Saturday, carries the ball after getting a takeaway during his college playing days at Arizona State.

In the competitive wine and music industries, where Justin Dragoo recently went from president of an estate winery to co-producer of BottleRock, he said the grit that got him through scores of injuries during his football days have helped him overcome business obstacles.

BottleRock had a tough first year in 2013 under its first producers, who left some of their debts for Dragoo and his partners to pay when they took it over in 2014.

It must have felt like Dragoo was injured all over again, facing another uphill battle, but it was just another challenge for him to tackle.

He stayed determined and has helped BottleRock live at least another five years.

He said it was the confidence he developed from overcoming eight knee surgeries during his career to join two NFL teams.

“There’s no question the multiple surgery rehabs, year after year, built a certain resilience in my outlook on just about everything,” Dragoo said. “Call it a quiet confidence, that there will always be a way to figure things out – always be a way to succeed.”

The Vintage High School Athletic Hall of Fame is welcoming Dragoo, a 1990 graduate who competed in football, basketball and track and field for the Crushers, and seven others this year.

They will be introduced before the Crushers’ varsity home game against Bellarmine Prep on Friday night, and inducted during a dinner and ceremony Saturday night at Elks Lodge of Napa.

Dragoo started at forward during his three seasons of varsity basketball but, despite leading the county in rebounding, was never named all-league.

He also did the 400 meters and high jump in track and field, lettering as a junior and senior.

“Track was more a sport I did in the spring to stay in shape,” he said.

Stay in shape for football, that is.

His brother, 1988 Vintage graduate Jason Dragoo, was part of not only the 1986 CIF Sac-Joaquin Section-championship squad but also the 1987 team that endured a close loss to Piner that ended a 10-game win streak.

“My brother was a great player, and went on to play football at the University of the Pacific and then Cal Poly,” Justin said. “He combined his passion for sports and medicine, and is now one of the most respected orthopedic surgeons in the country. He’s had an active sports medicine practice at Stanford for 10-plus years and continues to be the Stanford football team’s doctor.”

Justin, who didn’t play a down of football until his 1986 freshman year at Vintage, was moved up to varsity as a sophomore.

“Given the team had so much recent success, the expectations were high,” he said. “That was only my second year playing football, but that group of players, like Sean La Chappelle, Steve Porter and my brother, really ignited a passion in me for the sport.”

When Dragoo was a junior, he led the county in receiving yards. His senior year was a different story, interrupted by injuries. He also had hamstring injuries that didn’t need surgery, but kept him out of games. But when he played, he was spectacular at defensive end and big-time colleges were impressed – especially the one he signed with, Arizona State University.

“I had some small injury issues in high school. But since they weren’t serious, they mainly just diluted the statistics I could have had if I was on the field more. It did not affect my college recruiting,” Dragoo said. “Several colleges, including Washington, USC, Cal and ASU, were seriously recruiting me and I chose ASU. The Sun Devils appeared to be a team on the rise and had just won the Rose Bowl a few years prior. They had a respected business school, and it looked like I could start early in my college career. I redshirted my first year at ASU while changing positions to linebacker, and then started as a freshman.

Despite all the knee injuries in college, I stuck it out and was a four-year starter and was the team captain as a senior.”

At his Arizona State signing ceremony, Dragoo gave a gift to his position coach at Vintage, Kent Fry.

“Kent really believed in my abilities, and along with my dad, kept pressing me to become better,” he said. “Kent thought I could play well beyond the level I was at the time, and that positive motivation opened my eyes to things much bigger in the future.”

Dragoo graduated from the ASU college of business as its valedictorian, having its best GPA.

“Given my five knee injuries in college – four ACL reconstructions and one arthroscopic surgery – I was granted an extra year of playing time,” he explained. “Since I already had my degree, I applied to the MBA program and was in grad school during my final season of college football.”

He was named Academic All-America in football at ASU and won conference gold medal for the top achievement in both athletics and academics in the same year.

“My parents had a rule that if I didn’t get A’s in school, I couldn’t play sports. Trust me, that was plenty of motivation to focus on school and sports with equal passion,” he said. “By the time I got to college, the juggling of school and football became almost second nature.”

He signed with the Carolina Panthers out of college as a free agent.

“I made the team, but had more lingering knee issues from the very start,” he recalled. “I had another surgery with the Panthers and they did an injury settlement with me, essentially buying me out of my contract because I couldn’t play.

“After rehab, I was contacted by the Denver Broncos because I had a good game against them in the preseason the year before. They signed me despite my injury issues. Unfortunately, that also ended quickly in what was my seventh knee surgery. At that point, enough was enough in the football world. It was time to move on.”

His football career was history, but memorable history – especially the last year of it, with a Broncos franchise that went on to win its first Super Bowl in four appearances.

“I sometimes say I had a cup of coffee with the Panthers and the Broncos,” Dragoo said. “There isn’t much to say about (my) NFL action and I certainly would not want that exaggerated. The bottom line is that I had major knee issues going into the NFL, and had enough success in the preseason to get people’s attention. But, in the end, I was trying to play in the NFL without an ACL at the time, and it just physically didn’t work.

“Some great memories, though, and I had the chance to be around some amazing players. For example, it was the opening year for the stadium in North Carolina, so it was exciting to be a part of that. When I went to Denver for a short time, it was a team full of great players like John Elway, Shannon Sharp and Bill Romanowski. But, trust me, I was not an influence on them going to the Super Bowl.”

Dragoo finished his MBA, then took a job in an executive development program with IBM. He moved to Orange County, then Portland, Ore., San Francisco, Dallas and, finally, New York City.

“I traveled extensively overseas to India and Europe through various career moves within IBM,” he said. “It was a great learning experience in so many ways.”

But he was ready to pursue his original career choice. His parents, Mick and Mary, used to own a winery in Escondido.

“I always had a big passion for wine and the Napa Valley, and I had a rare chance to move back to Napa and become president of Gargiulo Vineyards in Oakville,” he recalled.

He was responsible for all winery operations, including farming, production, sales and marketing and hospitality.

“That boutique winery has amazing vineyard locations and the wines quickly sold out,” he said, “and thus I had time to explore additional passions.”

That’s how his father, who in the summer of 1989 became the first person to fly a hot-air balloon over Russia, had raised him.

“My dad was a very passionate guy in everything he did, and that rubbed off on my brother and me in a big way,” he said. “He was a dentist by trade, but had side passions in wine, hot air ballooning, building furniture, and all kinds of other hobbies. Something rubbed off on me because I’ve found myself pursuing careers in sports, then technology, then wine, and now music.”

Dragoo said his wife Ali, who has completed several full Ironman triathlons, and athletic sons Austin and Hayden have also inspired him during life after football.

“They’ve stuck with me as I’ve chased different passions and moved them around the country a bit. But we feel very fortunate to have landed back here in Napa,” he said.

He’s remained on the board at Gargiulo Vineyards, but stepped down as president in 2014 to form Latitude 38 Entertainment with business partners Dave Graham and Jason Scoggins – initially to “re-invent” the BottleRock festival in 2014.

“That quickly became a full-time job with events running year-round, and we were able to start building a great team of passionate people right here in Napa,” he said.

“You learn many important lessons through sports, and there is no question that helped me later in life. You learn the importance of strategy, how to work as part of a team, and how much passion it takes to win. Those lessons translate to both personal life and career, there is no doubt about it.”

Justin Dragoo, who will be inducted into the Vintage High School Athletic Hall of Fame on Saturday, poses at Fenway Park during a recent business trip to Boston.

Justin Dragoo, shown when he started at linebacker for Arizona State, spent a year with the NFL’s Carolina Panthers as a supplemental draft pick and one year with the Denver Broncos. He will be inducted into the Vintage High School Athletic Hall of Fame on Saturday.

Justin Dragoo, who will be inducted into the Vintage High School Athletic Hall of Fame on Saturday, carries the ball after getting a takeaway during his college playing days at Arizona State.