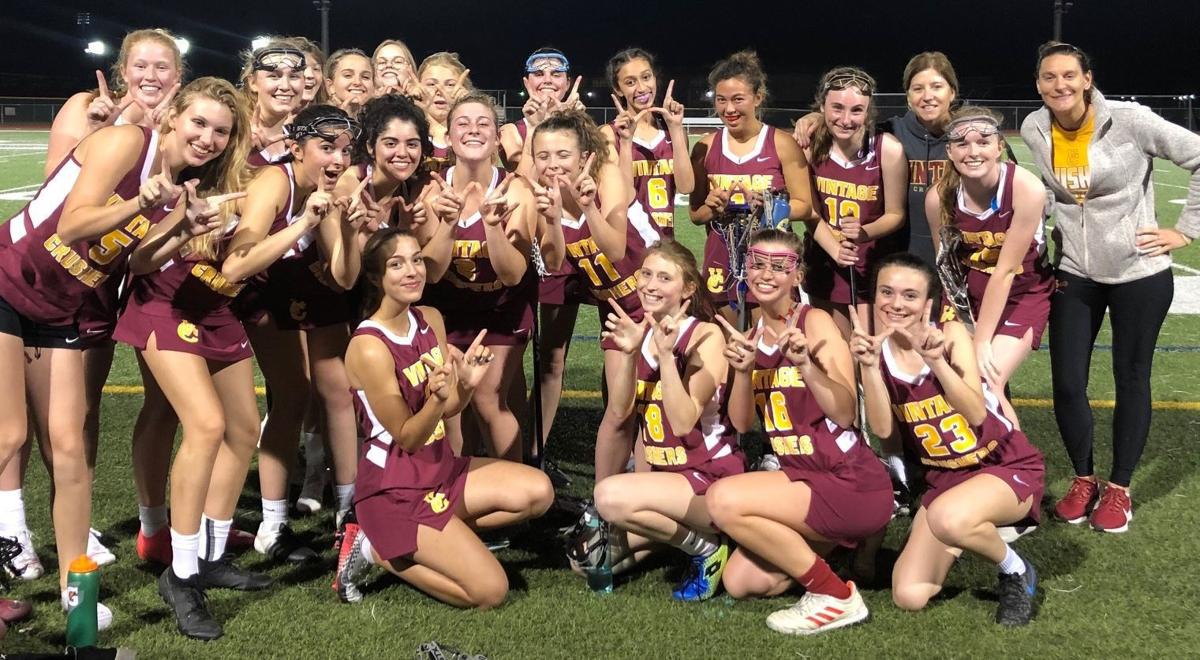 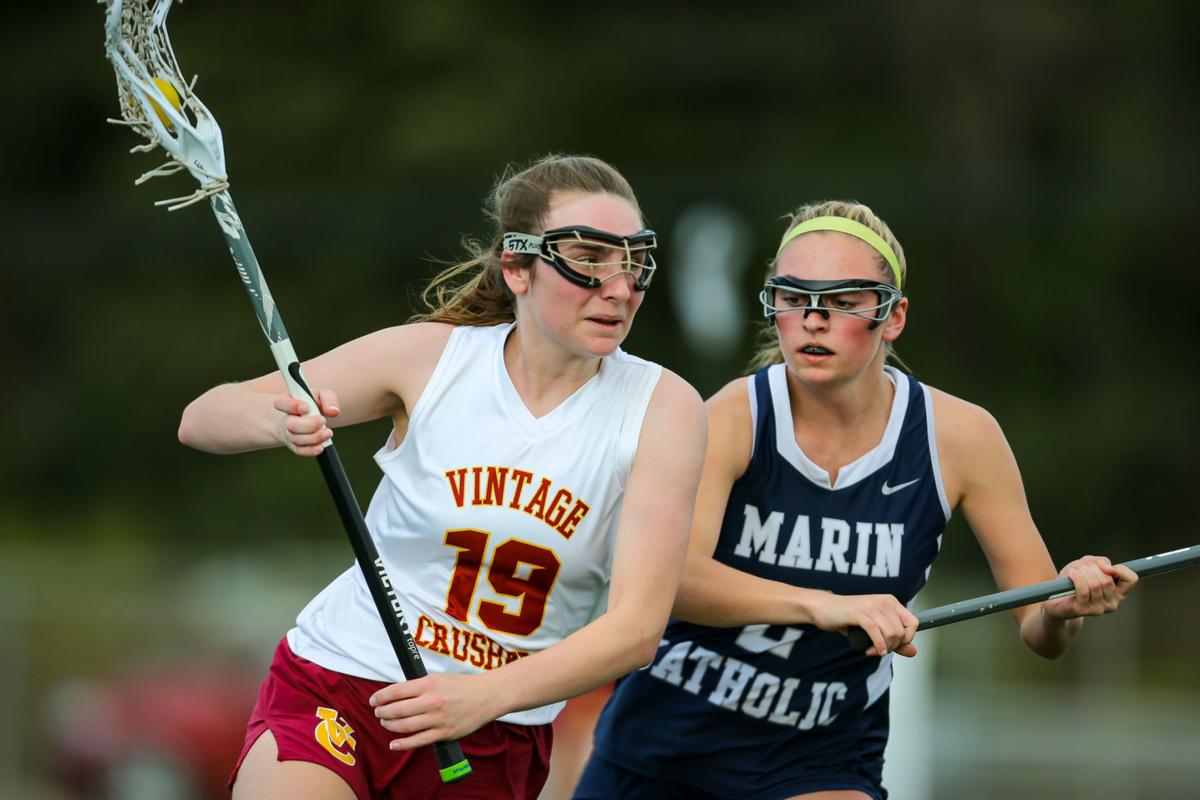 Vintage midfielder Ellie Savage drives into Marin Catholic territory during the Crushers' last game of the season on March 10. 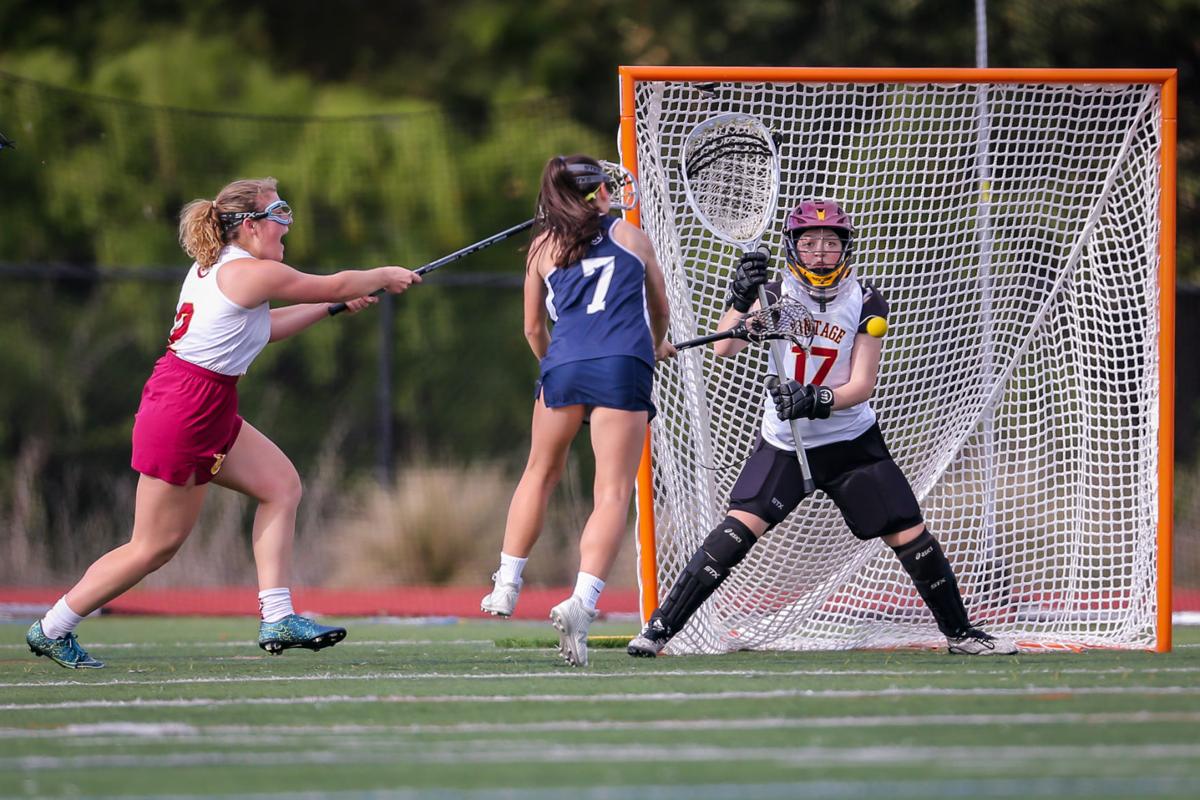 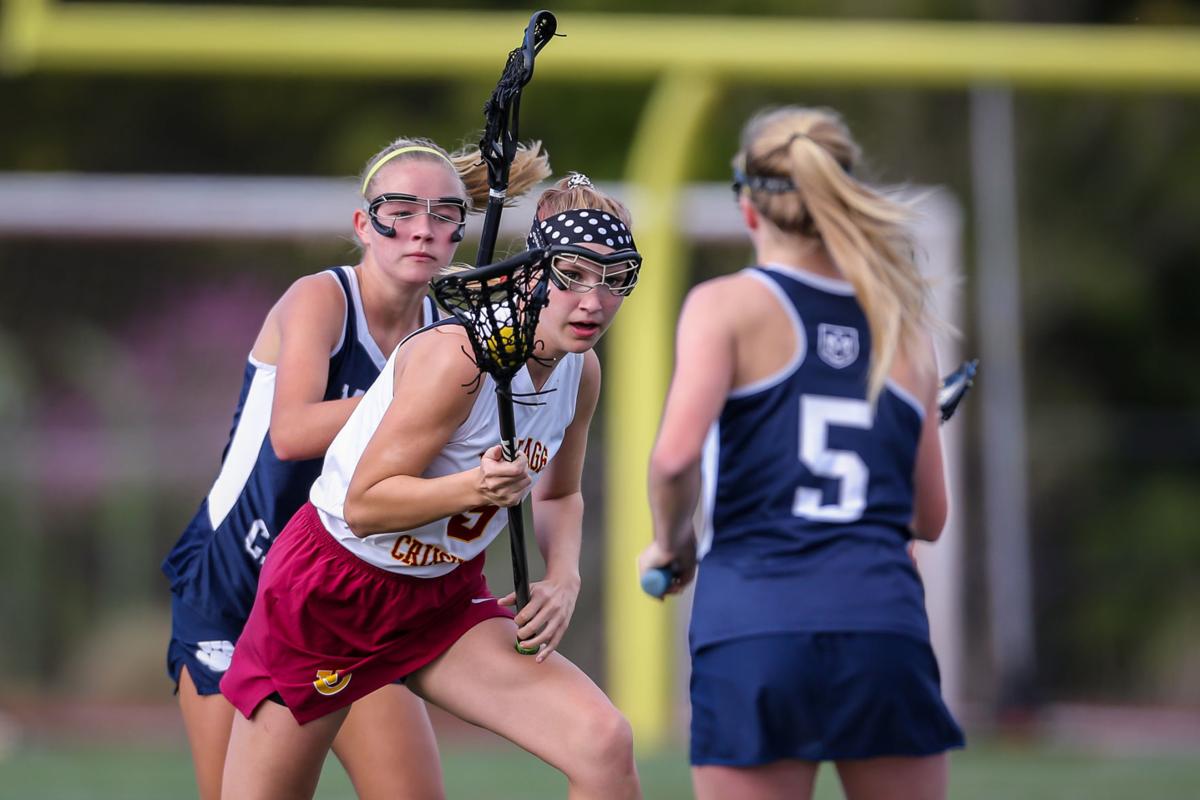 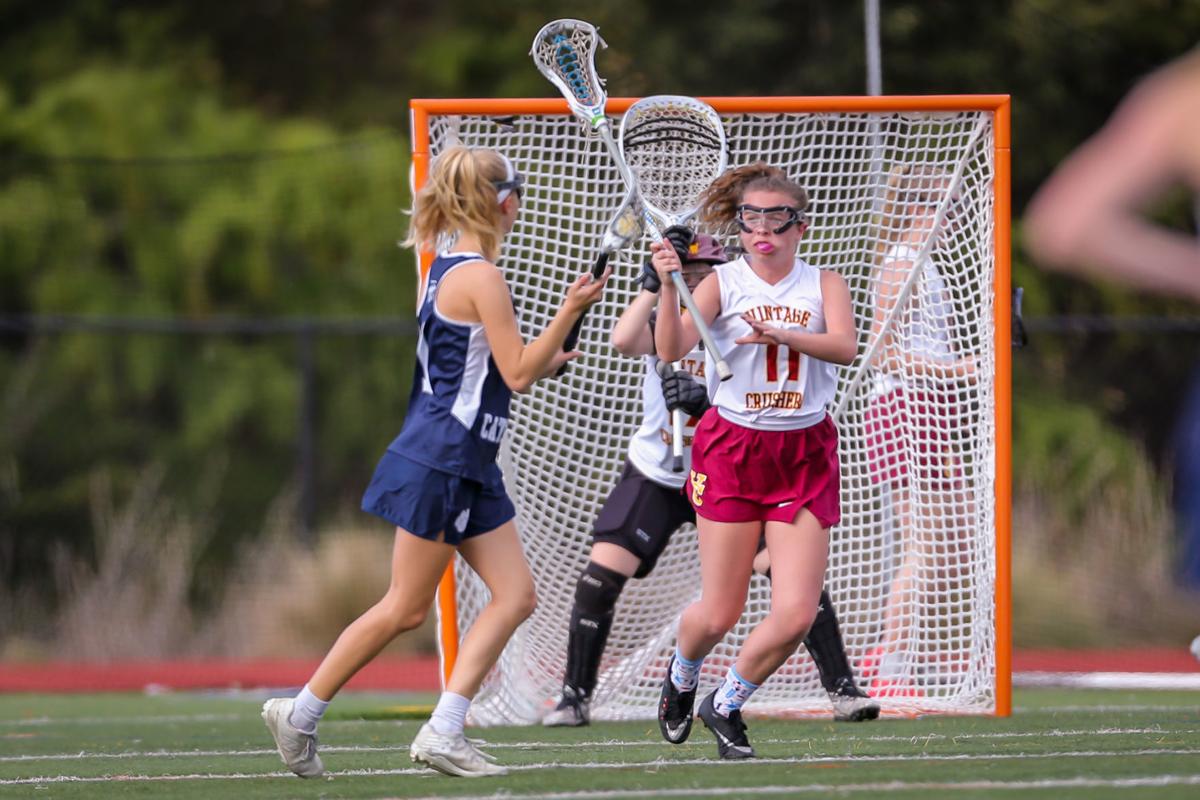 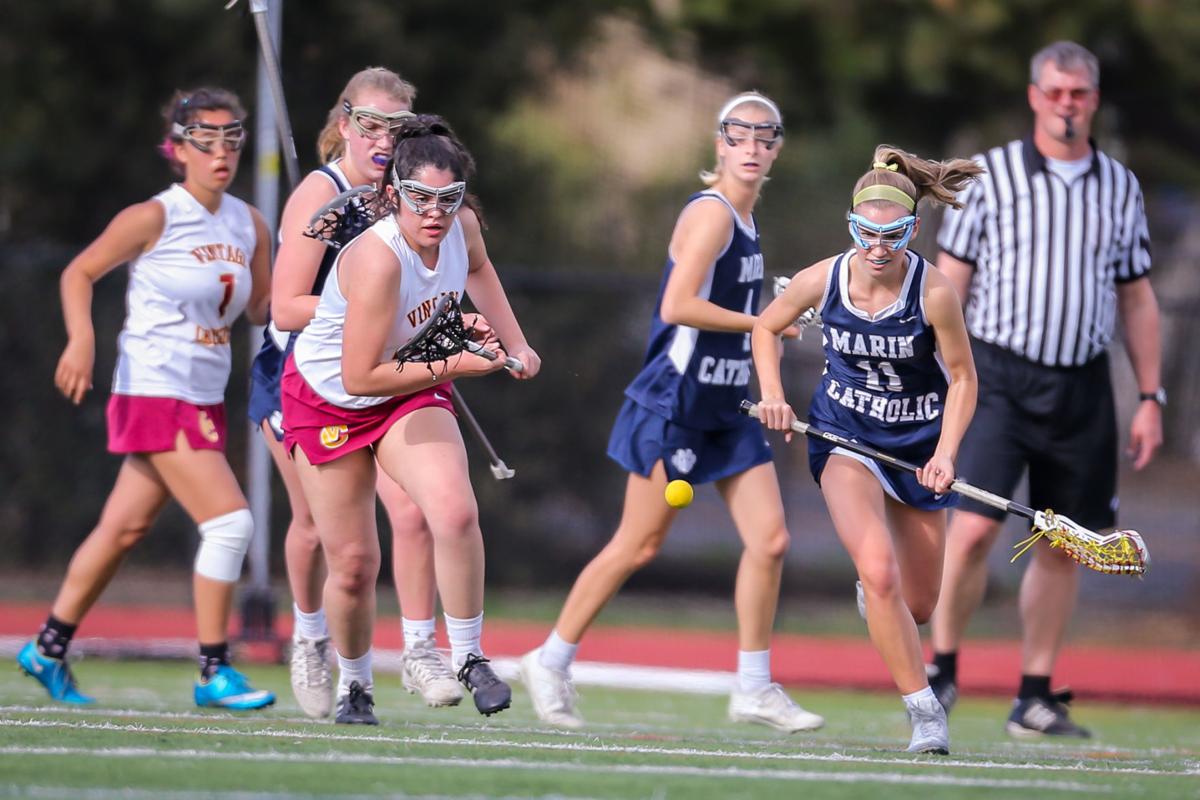 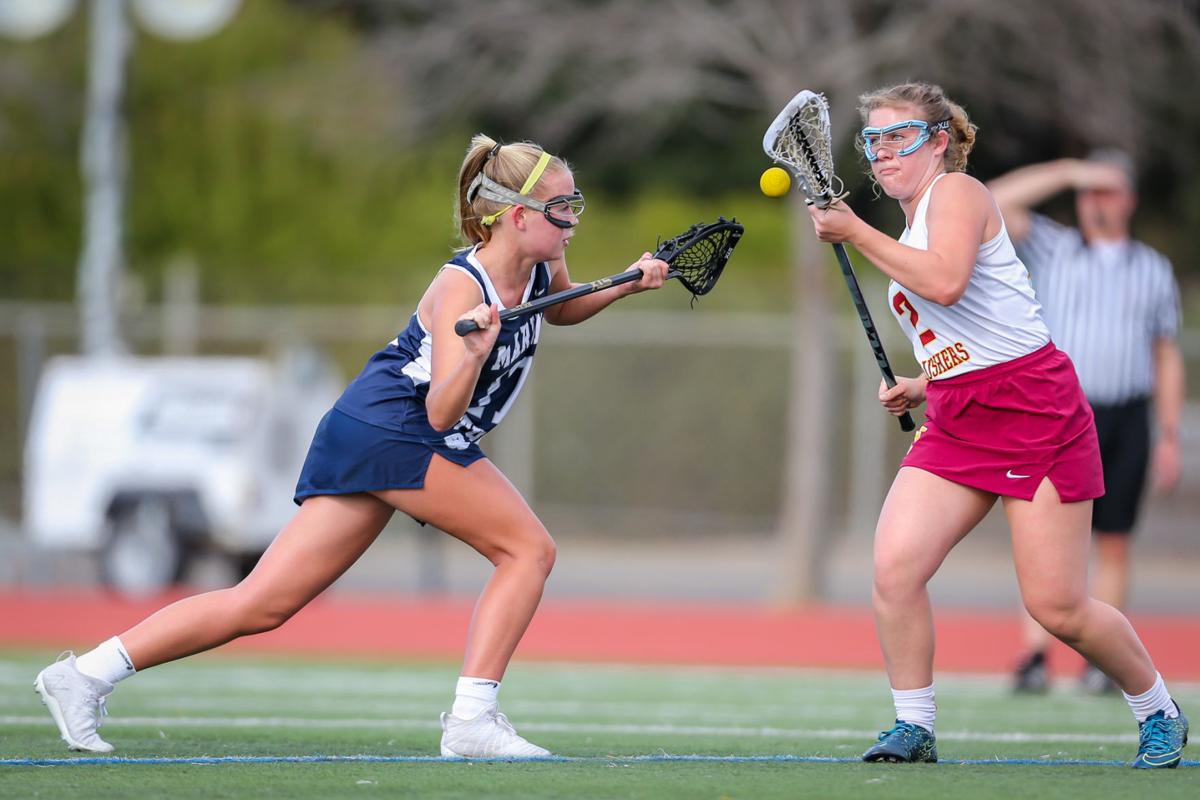 It wasn’t too hard for head coach Emily Pastula to tell her first-ever Vintage High girls lacrosse team on March 12 that its season would be on hold because of the growing coronavirus pandemic.

“The experienced players were used to practicing two to three times a week with Napa Force regardless of the grades they were earning at school,” she said of the Napa Youth Lacrosse Club, “and we were battling concussions, making grades, illness, injuries, and participating in the school play, so we were in much need of a break. I think the players saw it as a chance to recover and catch up on school so that if the season picked back up, we would be ready to go on a winning streak.

What was tough was telling the Crushers (1-5) three weeks later that it was over for good – especially the team’s one senior, captain Alaina Feldstein.

“She has been a part of this fight to get lacrosse added to Vintage for so long,” the coach said. “It is absolutely devastating that this is how her one year to play for her high school team has to end, especially since we could have saved some or all of our season if our national and world leaders listened to scientists from the beginning.”

It could have been worse for Feldstein. After junior captain Ellie Savage scored the program’s first-ever goal in an 8-2 loss at Northgate in the season opener, Feldstein got the honors for the second goal.

Vintage got closer and closer to its first-ever win with each game, losing just 10-7 at Livermore and 7-6 to visiting San Domenico – a team in only its second year of the sport – at Harvest Middle School.

Then came the big day at College Park of Pleasant Hill, where the Crushers overcame serious adversity to prevail 7-5 over a Falcons program in its eighth year of existence.

“It was great to finally get that W because I knew the girls were capable of winning if they played their game,” Pastula said. “What I am most impressed with about that game is that our team rose to the occasion due to multiple players being unable to play due to concussions, grades, illness, injuries, or participating in the school play.

“Our starting goalie did not play in that game. One of our field players, (junior) Brooke Shein – who played goalie when she was in seventh and eighth grade for Napa Force – stepped in the cage for the team. As a goalie myself, I can attest to that not being easy thing to do after minimal practice. The opposing team got off to an early lead and instead of hanging her head, Brooke started making saves, which allowed the team to build momentum and score 4 goals within two minutes or less of each other to put us ahead by 1 going into halftime. The second half of that game, the team listened to each other and the coaches, allowing us to hold on to our lead and come out with the win.”

San Marin and Marin Catholic – which like Northgate and Livermore were in their 13th seasons of girls lacrosse this year – brought Vintage back to earth with by handing them 17-6 and 21-0 losses, respectively, at Harvest.

Savage ended up leading the team by far with 15 goals and 37 shots on goal while adding 2 assists. Next with 4 goals, 9 shots on goal and a team-high 3 assists was freshman Julia Shein, followed by juniors Morgan Wright (3 goals, 1 assist) and Rose Mooney (2 goals, 1 assists) and Feldstein (2 goals). Two more juniors, Lea Skille and captain Madeline Bautista-Maurer, rounded out the scoring with 1 goal apiece.

“I think the first season went really well considering how short it was,” Pastula said. “I could not ask for a better group of girls to make up this inaugural team. The girls who have experience playing with Napa Force really stepped up and took the girls who were brand new to lacrosse under their wings to help build their stick skills quickly. The girls brand new to the game were extremely eager to learn the game and were constantly asking great questions to gain better understanding of the sport. I think playing tough teams out of the gate showed the girls who have experience that they still have a lot of room to grow, and as a team and program we are very far from mastering the game.”

Eight days after her 5 points and 4 rebounds helped the Vintage basketball team beat American Canyon in its season finale, Savage was already scoring on the lacrosse field. She led Vintage by far with 37 shots on goal.

“Basketball skills translate very well into lacrosse – we love basketball players – and Ellie has been playing lacrosse for six years now,” Pastula said of Savage, who played for the coach’s Napa Force under-15 team in 2016 and on the Force’s High School Girls team. “Ellie’s season was extremely impressive. She is in such great shape, allowing her to play the entire game without coming off the field. As a midfielder, that is very difficult to manage, but she does it and makes it look easy. She loves shooting the ball. I think if we could have continued with the season, her number of goals and shots on goal would be much closer.”

Pastula could relate to Julia Shein, having been a freshman on her own high school’s inaugural lacrosse team in South Lyon, Michigan – just outside Lansing, home of Michigan State University.

Pastula, a 2009 Michigan State alumnus, started coaching youth lacrosse to fifth- to eighth-graders in 2006 in the Detroit-area town of Okemos. She coached Okemos High JV girls teams from 2008 to 2012, the JV team at nearby Hartland High in 2013, and the varsity at Father Gabriel Richard High in 2014 – all while playing for the Michigan Elite travel club during the 2012 and 2013 seasons.

Upon moving to Napa to teach science for the 2014 school year, she met Aline Magee, the Justin-Siena head coach at the time, and became Magee’s assistant coach for the 2015 season. After Magee moved on to coach the UC Davis club team, Pastula coached the Napa Force U15 team in 2016. She helped Magee coach the UC Davis club in 2017 before returning to the Force to coach a 2018 High School Girls team that featured nine of her current Crushers. She also joined Magee on the Tenacity travel club staff from 2015 to 2019, and was the American Canyon High freshman volleyball head coach from 2016 to 2018.

“Starting a program from scratch was tough with all the logistics involved – ordering equipment, jerseys and team apparel, reaching out to teams to play us since we had no previous schedules to build off of, accommodating multiple sports during practice, and not getting to play home games at Memorial Stadium,” she said. “But there is no obstacle we cannot overcome together. It takes a village, and I am so lucky I have the one I have.”

Vintage midfielder Ellie Savage drives into Marin Catholic territory during the Crushers' last game of the season on March 10.