Become a Member
Read Today's E-edition
Share This
Vintage High School Athletic Hall of Fame: Watanabe among the first Crushers in her sports
Share this

Bengals vs. Titans: Updates and scores from the NFL playoffs 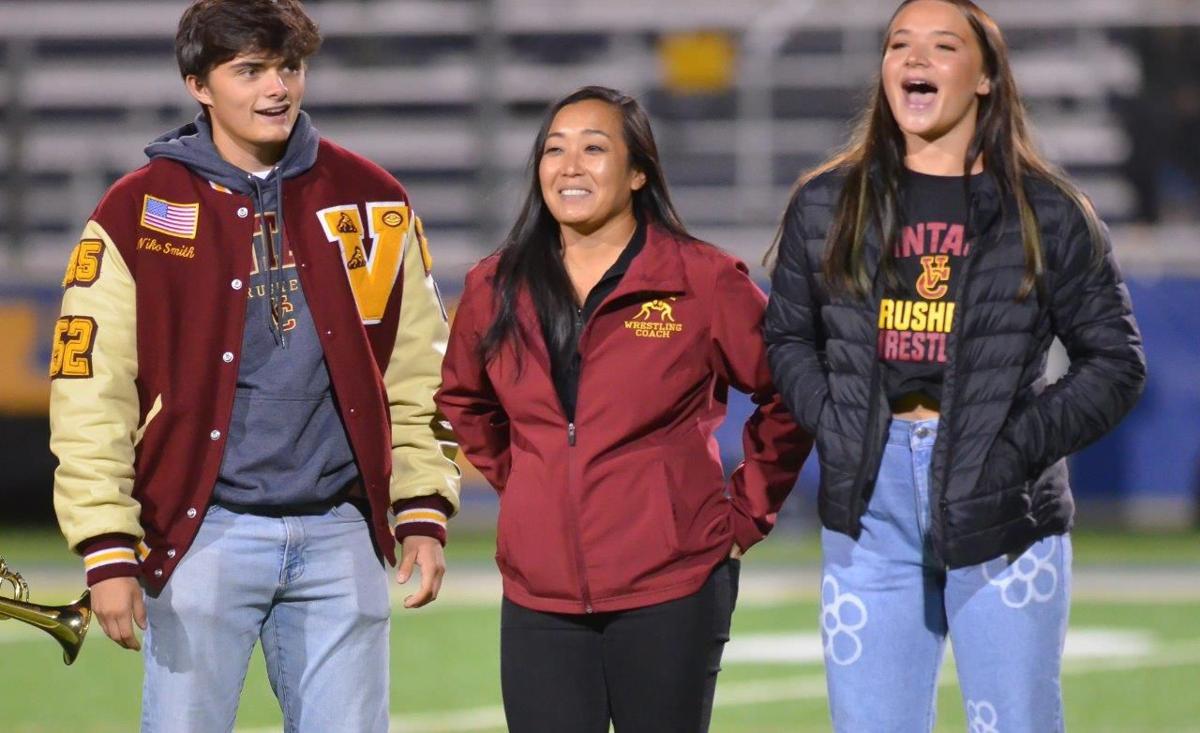 Maika Watanabe, one of this year's Vintage High School Athletic Hall of Fame inductees and the Crushers' wrestling head coach, is honored at halftime of the football team's Oct. 22 game against Sonoma Valley at Memorial Stadium while escorted by senior wrestlers Niko Smith, left, and Leilani Frazer. 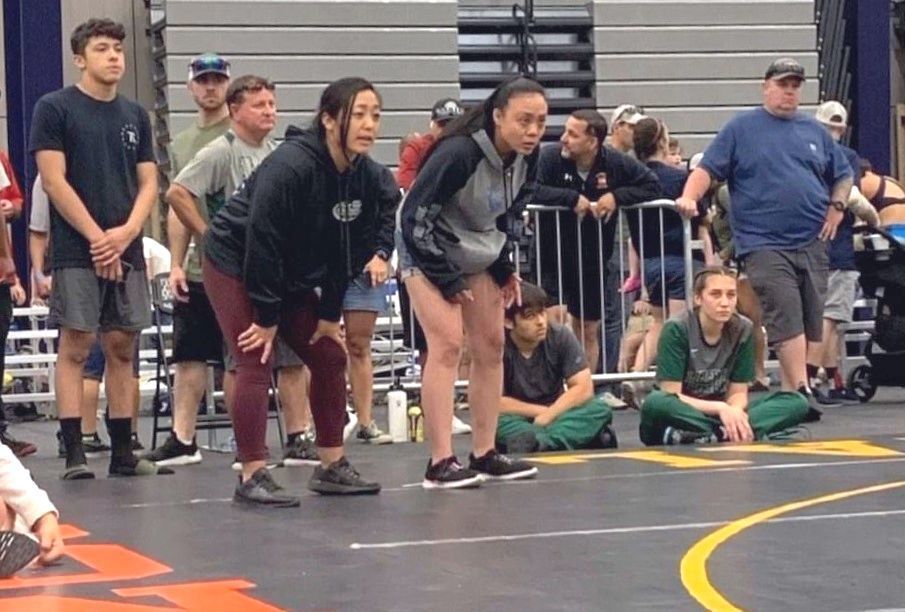 Maika Watanabe, left, is in her fourth season as head coach of the Vintage High wrestling program, 20 years after helping the Crushers win a girls state title on the mat. 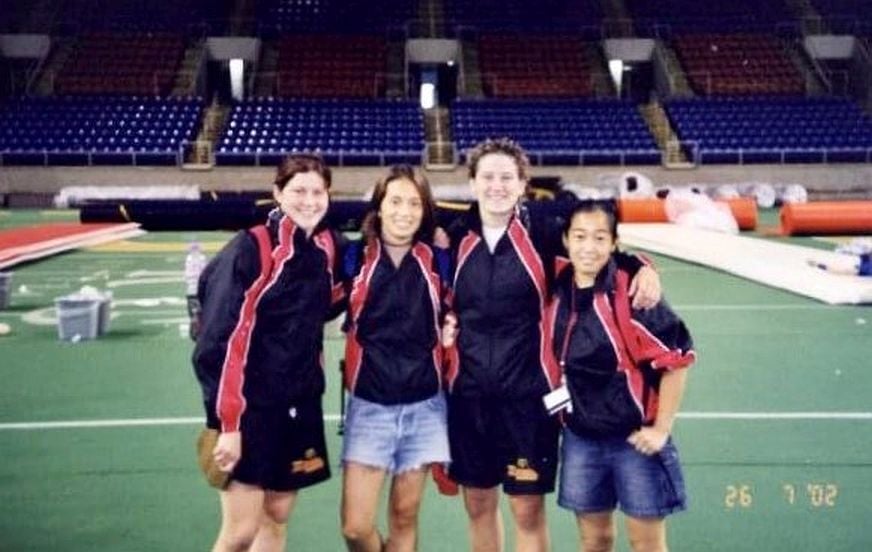 Maika Watanabe, far right, poses with fellow wrestlers during the summer before her senior season of wrestling for Vintage in 2002. 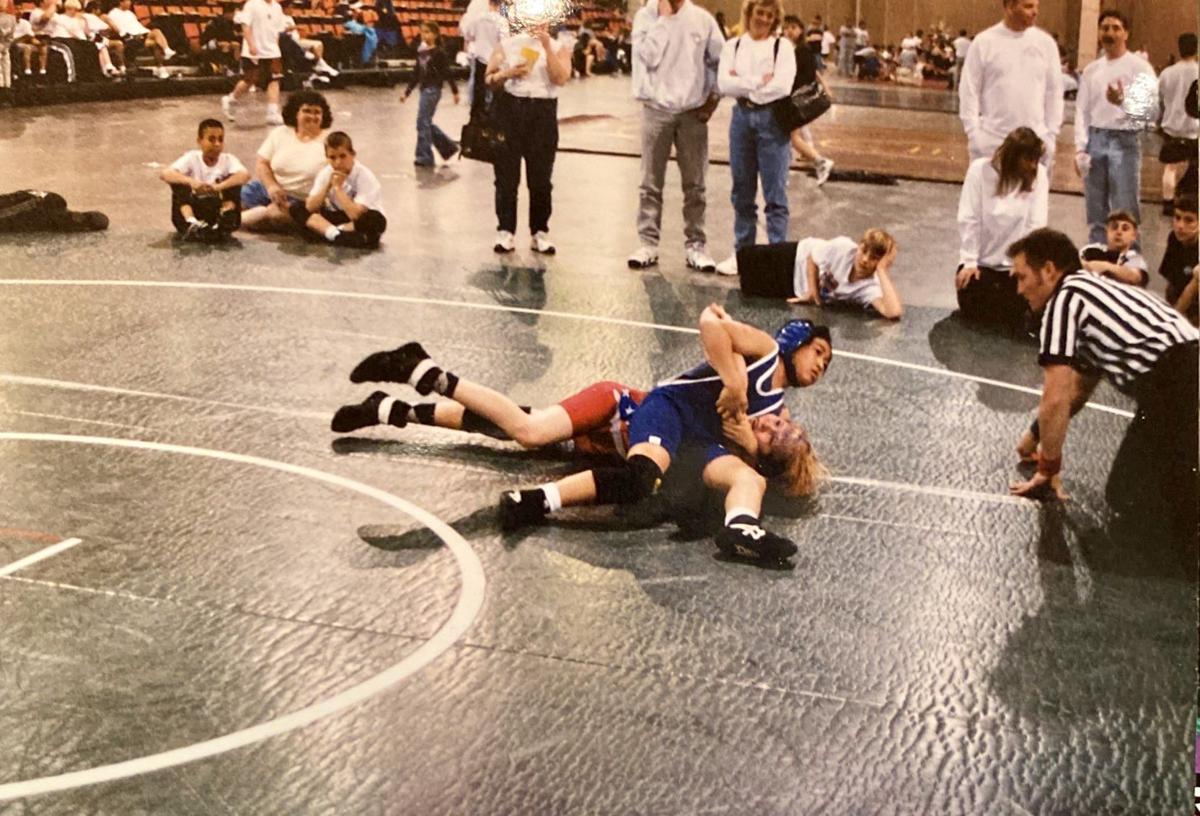 Maika Watanabe, top, is showing during her years as one of Vintage High's first female wrestlers.

Norms are defined by things that are typical and standard.

When 2003 Vintage High graduate Maika Watanabe was a student-athlete, high school female wrestling and golf teams were entering the equation but not yet viewed as commonplace. The concept has gradually become normalized over the years.

Her resume, coupled with being associated with an era that contributed to the heightened popularity of female wrestling and high school girls golf, earned Watanabe a spot in the Vintage High Athletic Hall of Fame.

She is one of 12 inductees in the 2021 Vintage High School Athletic Hall of Fame class, which is twice as big as most because the 2020 edition was canceled due to the pandemic. Vintage Athletic Director Cam Neal said the induction dinner has been planned for April or May.

After graduating from Vintage, Watanabe became a two-time All-American at Missouri Valley College in Marshall, Mo. and member of back-to-back Women’s College Wrestling Association championship teams in 2004 and 2005.

“I was a little in shock,” Watanabe said when learning of being an inductee. “I didn’t think I was old enough or graduated that long ago. I also thought of other wrestlers that could have been in my position. It feels good to be recognized for something that I did when it was just a sport I did back then. But when I look back, it was something that led me to coaching and teaching. It feels great.”

To qualify for the Hall of Fame as an athlete, one must be at least 15 years removed from graduation. Watanabe, who wrestled four seasons and played three years of golf for the Crushers, has returned to her roots. She is a resource math teacher at Vintage and is the head coach of the boys and girls wrestling program.

Though girls wrestling was not sanctioned at the state level by the California Interscholastic Federation during Watanabe’s era, she was a three-time state medalist — including state champion as a senior in 2003. As a golfer, she was All-Monticello Empire League as a senior.

Her brother, Brian Watanabe, graduated in 2002 after placing sixth at the state meet in 2001. Maika’s interest in wrestling was a mixture of both watching her older brother along with competing in judo.

“Wrestling and judo go hand-in-hand,” she said. “Brian encouraged me to join wrestling. I remember wrestling on the varsity team in high school. That was a big accomplishment when there were not many girls wrestling when I started. One of the biggest matches I remember was at the boys state meet in 2003. They had us do exhibition matches to show because girls wrestling was not sanctioned back then. They chose me and Sylvia Cortez from Hanford West. We had won state in our weight classes. We opened the boys state finals in that center match in front of thousands of people.”

Watanabe added that with the competitive nature that it takes to succeed in wrestling, the perseverance aspect has translated into success in her life since. She indicated that wrestling at the college level took an even greater level of determination.

“There are a lot of life skills with wrestling,” she said. “It involves setting goals. Then you do what you can to reach those goals. In high school, I was there and did it for all four years. In college, it is at another level. You compete against Olympians. That’s when I knew practices were a lot tougher. The dedication to the sport is more intense. That was when I realized I can go pretty far.”

Though Missouri is two time zones away from California, it turned into a reunion for Watanabe when Carl Murphree resigned as Vintage’s co-head coach in April 2003 to take the job at Missouri Valley College. There were two other Vintage alums at MVC — Emilee Murphree, Carl’s daughter, and Christie Rafanan. Kayla Chambers later joined Watanabe, who majored in criminal justice and psychology with a minor in alcohol and drug studies.

When Watanabe wrestled in high school, the idea of girls competing in the sport against each other gained traction but was not mainstream. In January 1999, she had not yet arrived at Vintage when the school hosted the Napa Valley Girls Classic, the first all-girls wrestling tournament in Northern California.

“I didn’t know how much it would grow since I graduated high school,” Watanabe said. “It has picked up and it is nice seeing all of the competition, having hundreds of girls wrestling in the state of California. College programs are also picking up. When I graduated, there were only about seven colleges that had women’s wrestling programs. It was slim pickings to choose from, but now there are hundreds. That allows for more girls to start wrestling at a younger age.”

As a sophomore in 2000-01, Watanabe won at the NVGC and took second at the state meet, losing to Vallejo’s Lenci Landaker (4-3) at 99 pounds. As a junior, Watanabe took third at the state meet at 100 pounds. She also earned a spot on the California National Wrestling and United States Girls Wrestling Association National Championship teams and placed second and fourth for them, respectively. As a senior, she won the 110-pound state title, beating American’s Kassie Cole in the final, 10-2. Watanabe was part of two teams of state champions for the Crushers.

Since Watanabe had female wrestling teammates at Vintage, she recalled also having a sense of community with female wrestlers from nearby schools such as Vallejo (Sheila Lerit and Lenci Landaker) and Jesse Bethel (Maribeth Grimm).

“We traveled around together going to tournaments,” Watanabe said. “We hung out in the stands and cheered each other on the mat. Even if we competed against each other, in the end, we would still be friends. It felt like we had our own community because there were not a lot of girl wrestlers at the time. It was nice having other female wrestlers around that you could connect with.”

Though wrestling was where Watanabe made her athletic identity, she was also a ground-breaking golfer as a member of the Crushers’ first all-girls team in school history. Watanabe was often the Crushers’ No. 1 player in a five-person lineup.

“Golf was just kind of fun for me,” Watanabe said. “They asked if I wanted to play and I said, ‘Sure, why not?’ I liked trying new things. Golf was a different mindset. It was calmer and less aggressive. It was a good change.”

When it comes to lineups, Watanabe has a lengthy depth chart for those she considers guiding lights on her journey of life and athletics.

“I still look up to my coaches and talk to them regularly, such as Carl Murphree,” she said. “He’s taught me a lot. Jim Lanterman (2017 VHSAHOF inductee) was a great influence and he still coaches with me. I keep in contact with Tim Hausler, who coached Vintage in 2001. Bob Gonzalez is another one that I see at tournaments. I keep in touch with them while staying involved in the sport. My parents influenced me to get into wrestling. If not for them, I wouldn’t be where I am right now.”

Maika Watanabe, one of this year's Vintage High School Athletic Hall of Fame inductees and the Crushers' wrestling head coach, is honored at halftime of the football team's Oct. 22 game against Sonoma Valley at Memorial Stadium while escorted by senior wrestlers Niko Smith, left, and Leilani Frazer.

Maika Watanabe, left, is in her fourth season as head coach of the Vintage High wrestling program, 20 years after helping the Crushers win a girls state title on the mat.

Maika Watanabe, far right, poses with fellow wrestlers during the summer before her senior season of wrestling for Vintage in 2002.

Maika Watanabe, top, is showing during her years as one of Vintage High's first female wrestlers.