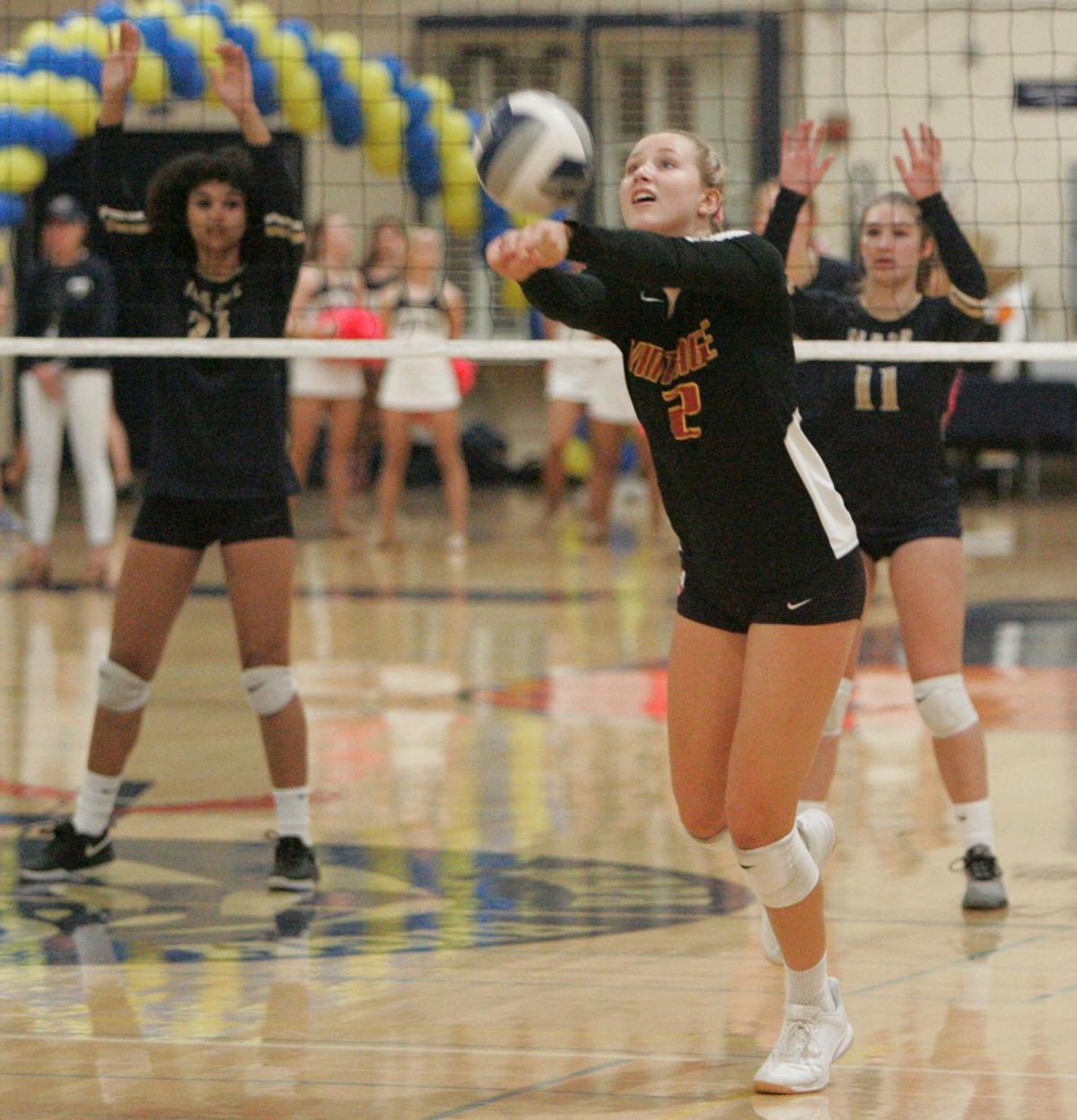 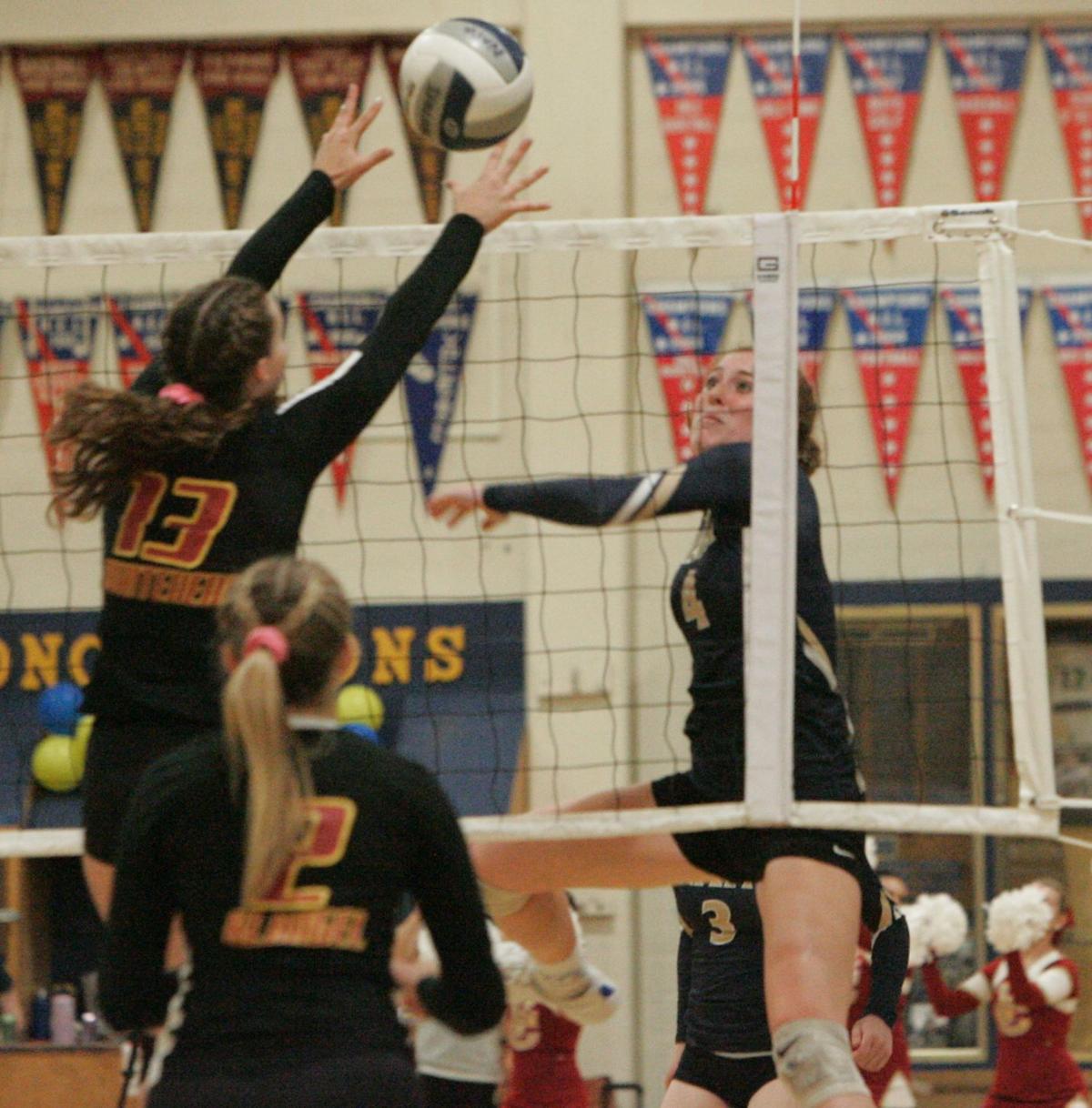 Vintage junior setter Elisa Gonzalez couldn’t continue after chipping a tooth in the first set, forcing one of the Crushers’ top hitters, Cal State Northridge verbal commit Maddie Klungel, to do all of the setting out of a 5-1 offense.

“That was a hard fall because we run a 6-2 offense and she sets me,” said Klungel, a senior captain who finished with 11 kills, 3 aces, 21 assists, 10 digs and 5 blocks. In the second set, Vintage lost junior right-side hitter Olivia Ostler to an ankle injury.

“Olivia has been a really big part of our team. Losing her was really hard for us and we just fell out of it,” Klungel said. “In the third and fourth sets we picked it up because we knew we needed to win for them. We knew how much they wanted to be on the court and it was hard for us to see, so we played as a team and pushed through it.”

“We’re really focusing on our serve-receive and serving and it’s paying off,” Klungel added.

Vintage head coach Kelly Porter said Ostler landed on another player’s foot wrong under the net, and that Julia Scheumann rolled her ankle on the same play but was able to return. The coach said Gonzalez injured her teeth when Gauger jumped up to hit the ball and accidentally head-butted Gonzalez.

“We had some things to overcome with injuries to critical players. Two people go down, so we have to shift the lineups,” Porter said. “We did rise to adversity, which was amazing. But my expectations are high and we know that we have a target on our back, so to see us miss 16 serves – something that we work on all the time in practice – is critical, and we had a ton of hitting errors. It just wasn’t a well-played volleyball game on our side of the net, and that’s frustrating to me as a coach.

“My first concern is those two players getting healthy, of course. But we have to come in and be better, be above it. We have to work harder and not just think we’re not going to just walk into the gym on our good graces and expect to win. Seeing teammates have to leave the gym and get iced up, it just seemed like we were out of sorts – from the start. Napa served tough and played solid defense.”

The Grizzles, led by outside hitter McCauley Smith and libero Maddie Larson, took a sizable lead late in the first set – aided by several missed Vintage serves – before the Crushers came back to win it.

The same comeback nearly happened in the second set before the Grizzlies pulled it out.

The Crushers’ mental exhaustion seemed to show late in the fourth set when they began celebrating too early as a Napa pass was heading out of bounds. It was high enough for Diana Calderon to make a miraculous save for Larson to relay over the net, however. Vintage ended up losing the point, bringing a roar from the home crowd. But the Crushers refocused and sealed the win.

“When we got to that second set it felt really, really good to win it,” said Smith, who teamed with junior Shannon Sowersby to lead Napa in kills. “I remember being a freshman (on the JV) when our varsity beat Vintage last, cheering them on.

“Our defense is getting a lot better. I think our serve-receive, definitely, could be better. But I think our energy was really good tonight. I think we played well when we were behind, especially in the second set. The last couple of years have been tough, but we’re getting wins again.”

Napa High head coach Kelly Van Winden never likes to sugarcoat a loss. When asked about the second-set win, she delved into the first-set collapse instead.

“I think that when you’re up by 10, 12 points in the first set and lose, there’s a problem,” she said. “It’s not that we’re not capable. We’re just not confident that we can (protect that lead), and Vintage is confident, because they’ve had a history of winning since my daughters played for them.

“When you walk in the door and you’re Vintage, you’re already thinking you can win, and they have some nice players,” she added. “We don’t have the firepower that they do, but we play with a little bit of heart and that changes things. But we’re still struggling a little bit with closing, and we don’t have the depth that other teams have so we have to all be ‘on.’ But I really am enjoying coaching this group. They’re very special in that they work hard and they have a lot of heart. Quite frankly, they’re very entertaining.”