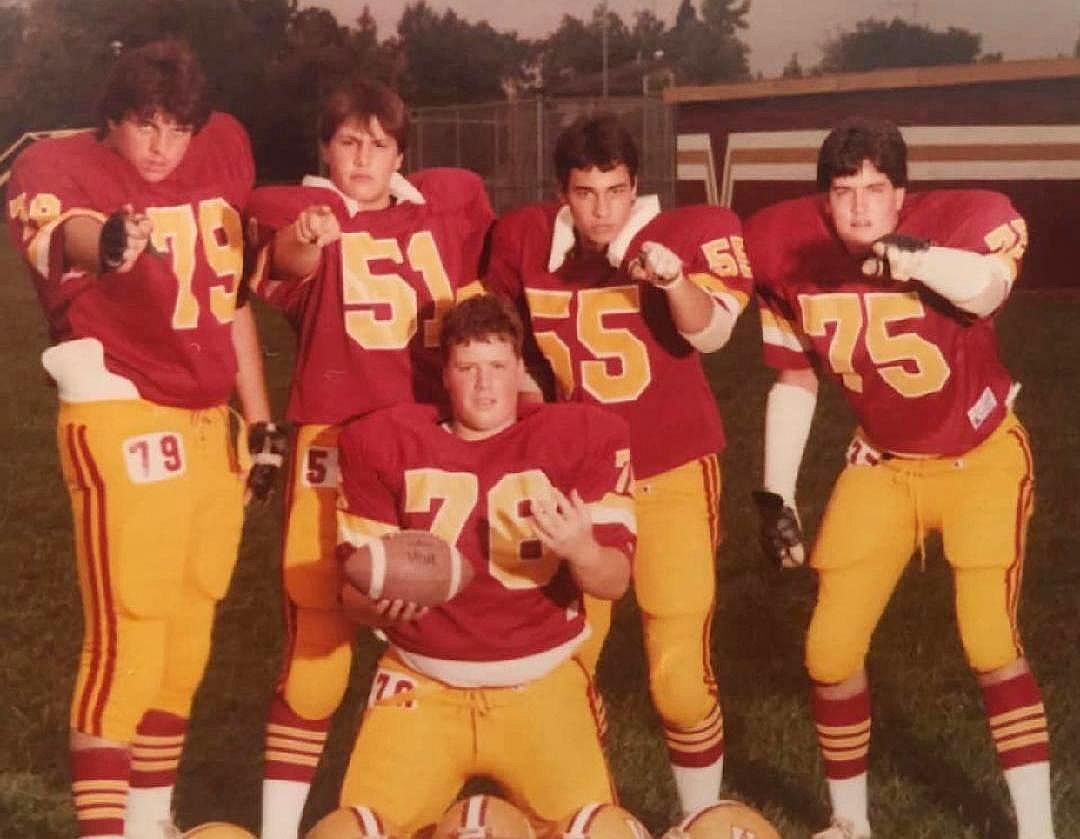 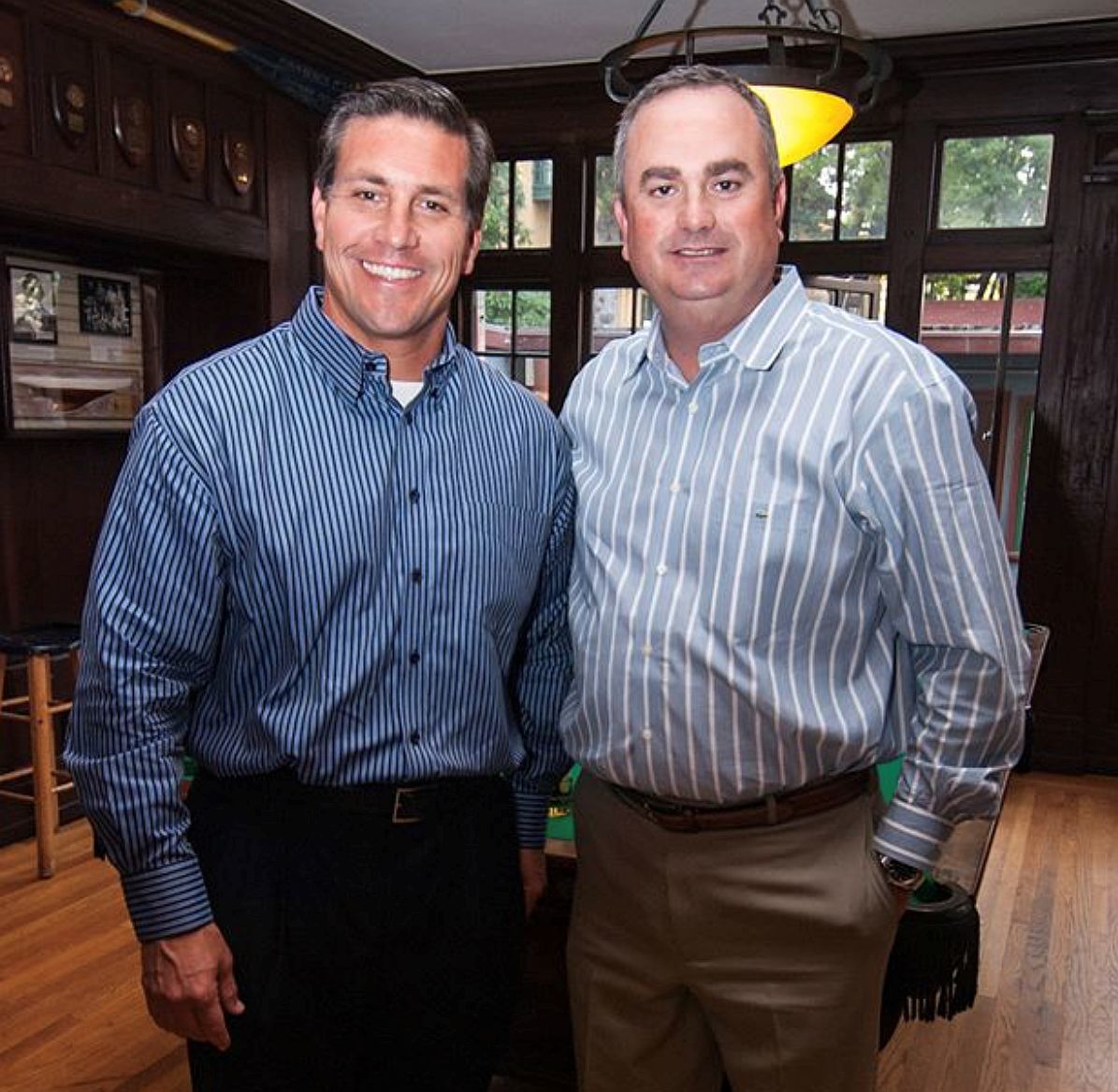 Kevin Montoya, left, poses at his Theta Delta Chi fraternity at UC Berkeley with former Cal football head coach Sonny Dykes in April 2013. Dykes was at the Golden Bears' helm through the 2016 season. 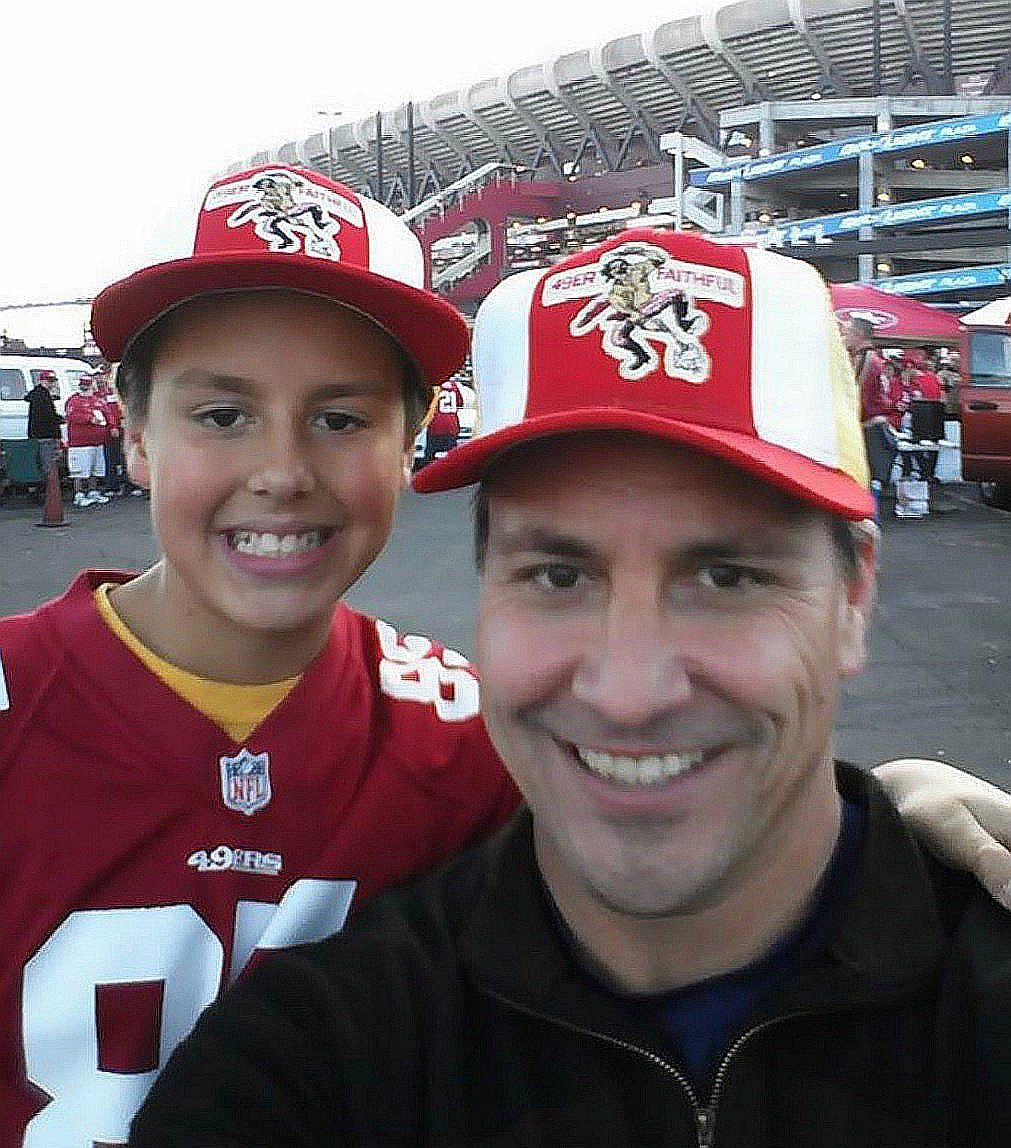 Kevin Montoya poses for a selfie with his son, Robert Montoya, at San Francisco's Candlestick Park, where Kevin worked with his father and other family members  as a vendor at 49ers and Giants games. 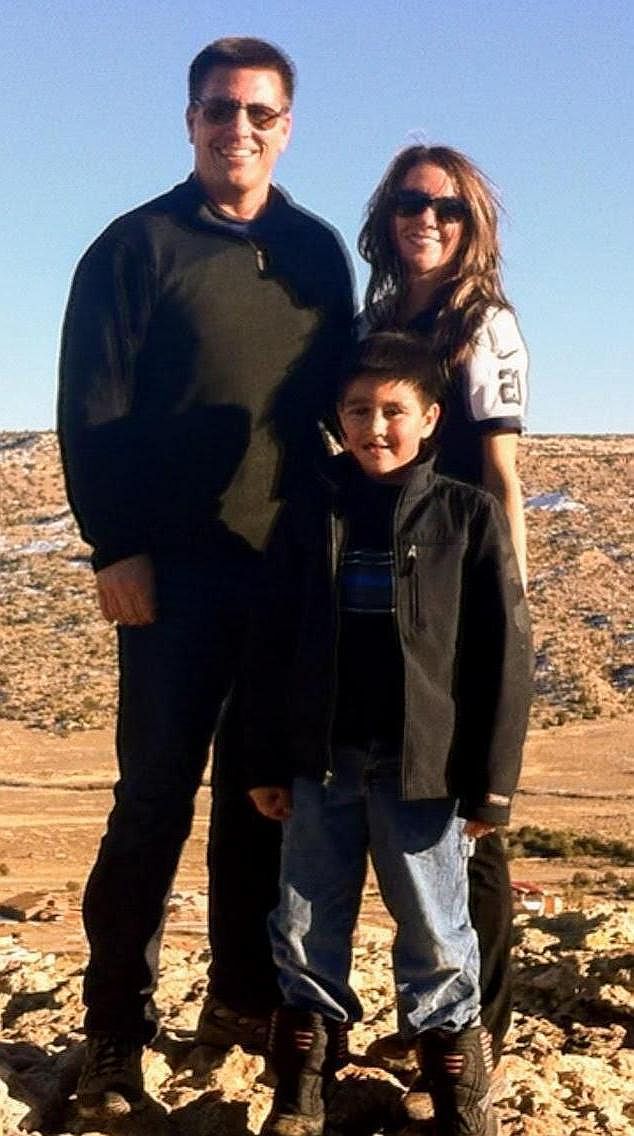 Kevin Montoya and his sister, Melanie Montoya Blackmon of Napa, pose with their nephew, Max Montoya, behind their grandmother’s house on the reservation in Seama, New Mexico. 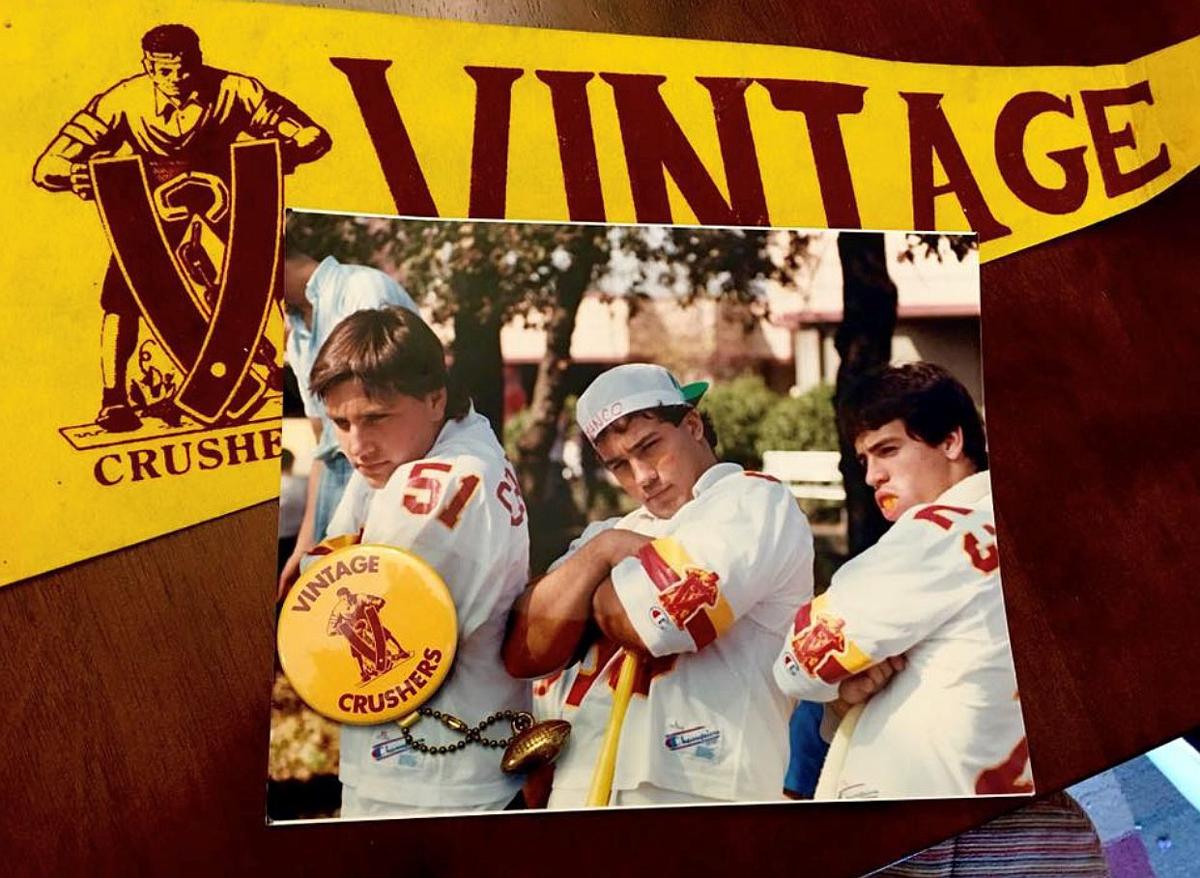 Kevin Montoya, left, hams it up with Vintage High football teammates during Big Game week in 1986. 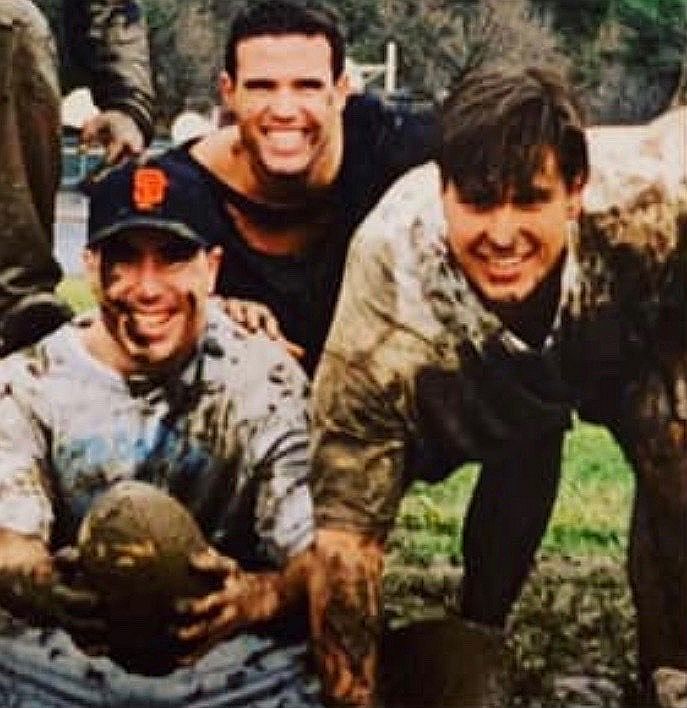 There is so much Mike Koontz remembers about the 1986 Vintage High School football team, the CIF Sac-Joaquin Section Division I champion.

Koontz, the Crushers’ head coach, remembers the way the players set goals, starting all the way back to their freshmen year. He remembers the way they supported each other, just how hard they worked, the discipline and energy that they had in practices that carried right over into games, and the intensity, pride and teamwork they displayed.

“It was just a tremendous group of young men,” Koontz said in a phone interview from his home in Lakeside, Montana, a small town about 80 miles from Glacier National Park. “That crew made it fun. The season was fun. As a coach, I enjoyed every bit of it.

“The goals that these kids set by themselves was unbelievable. You can’t coach that. That’s an inner thing – them setting their own goals and the things that they wanted to do.”

It was a long time ago – a different era, 34 years ago, the fall of ’86, when the seating at the old Napa Memorial Stadium was in such close proximity to the beautiful grass field, with Quonset huts that were used for team rooms. Koontz remembers the past very well – the confident attitude and the toughness and emotion that Vintage played with. He remembers all of the wins that season – each of the 13 wins.

“I just have a lot of respect for all those kids on the ’86 team,” he said. “Those section championships are very hard to get, especially in the Sac-Joaquin Section.”

There were superstars and playmakers up and down the roster for Vintage, which went 13-1 and had playoff victories over Grace Davis-Modesto (13-7), Lodi (15-8), Tracy (7-6) and Christian Brothers-Sacramento (14-0) in the finals.

One of those standout players, Kevin Montoya, passed away on Jan. 31 at Zuckerberg San Francisco General Hospital and Trauma Center after suffering a heart attack. He was 50.

“The team is like a family. When we lose somebody in the family like Kevin, or anybody, it’s heart wrenching,” said Koontz. “I just feel for his family and friends, what they have to go through.”

Montoya was a key performer, a two-way starter who was named to the All-Napa County team as a senior defensive lineman. He helped the Vintage defense limit opponents to just 3 yards per play, eight touchdown passes, and 108 points during the season. He made 36 primary tackles and was credited with four assisted stops on a defensive unit that was led by Bill McGrath, the team’s defensive coordinator.

“Kevin had something to deliver – they all did,” Koontz said. “When it came time to strap on their helmets to play the game, it was very important.”

Montoya wore No. 51 and started at left guard on the offensive line, joining a position group that had Barry Forsythe at center, Steve Porter at right guard, Warren Bowers at left tackle and Jeff Sire at right tackle. David Ilsley was the tight end.

“The pieces were there, that’s for sure, and he was definitely one of them,” said Porter. “He was a playmaker, there’s no doubt about it. He was a hard worker in practice, and just a good teammate, too.”

Montoya, a 1987 VHS graduate, had an impact with his play on both offense and defense. He also got playing time at inside linebacker.

“We had a pretty special offensive line, without a doubt,” said Porter. “For the most part, we were all kind of the hard-nosed grinders. We were all in sync. (Montoya) was extremely fast – fast on getting off the ball. On defense, he just kind of had a flair for the big play. It seemed like any time we needed a sack or something, he somehow came through.”

It was Montoya’s upbeat attitude, his spirit and positive personality that Koontz remembers well. Montoya always had a smile on his face when he stepped into the P.E. office in the gym, said Koontz, a former principal at Anderson High and a former vice principal at West Valley High-Cottonwood.

“It was like, ‘Don’t worry, we got this.’ That was the Kevin that I knew,” said Koontz, who is now retired. “He’d make me laugh in the office.”

Montoya was “laser-focused” each and every day, playing with a drive and a passion for the game and his assignments, said Mark Massari, a star linebacker for the Crushers who went on to play for Sacramento State for four years.

“Kevin fought tough out there,” said Massari, a 1987 VHS graduate. “I thought Kevin epitomized kind of that whole team – a bunch of unselfish, hard-working people. Kevin had a good motor and got the most out of his talent. I really believe Kevin was a strong piece of that ’86 team. That was a special time for Vintage.

“I thought Kevin touched a lot of lives in high school, reached out to a lot of different people. I know he loved his Vintage family. I know he loved being from Napa. I have some fond memories of Kevin and those times.”

Montoya was twice named to the All-Napa County team for Vintage. He was also named to the All-Monticello Empire League team and played in the East-West Charity All-Star Classic, a mid-summer game that no longer exists.

In an Aug. 24, 1987 story in the Napa Valley Register, Montoya talked about the championship season at Vintage, saying: “We had it in our hearts that we were going to win it. We knew we had it. Ever since the ninth grade we talked about it. We knew when we were seniors that we’d be there. It was just a dream that we had since we were freshmen. Everything went our way. It was excellent.”

Montoya loved football and being on a team and representing Vintage, said his sister, Melanie Montoya Blackmon of Napa.

“He’s always been a football guy. He loved the camaraderie with the guys and the pride of representing something,” she said.

“My dad (the late Bob Montoya) was super proud of him. You could always hear my dad in the stands yelling, whether it was at my basketball games or Kevin’s football games.”

Kevin Montoya worked with his father and other family members at Candlestick Park as a vendor at San Francisco 49ers and San Francisco Giants games.

“He was 49er faithful,” said Montoya Blackmon, a 1992 Vintage graduate.

Montoya continued in football, going on to play in college for two years at San Francisco State as a linebacker.

He shined as a sophomore for the Gators, making 118 tackles with two fumble recoveries, four blocked extra-point attempts, two sacks and forcing a fumble.

He earned “Defensive Scout Team Player of the Week” honors during his days at San Francisco State.

His career ended due to an injury his first season as a walk-on after transferring to UNLV, where he studied hotel management.

Montoya then transferred to UC Berkeley and graduated in 1992 from Cal with a degree in economics. He was a member of the Theta Delta Chi fraternity.

“I definitely know he loved being a Cal Bear,” said Massari, a resident of Lake Oswego, Oregon.

Massari works in university marketing, primarily with the West Coast Conference, for Van Wagner Sports & Entertainment, a sports marketing and media sales organization. Massari was director of athletics at UC Santa Barbara from 2008-2014, and also worked in athletic administration for several years at Oregon State.

Montoya worked as a stock broker and in financial services, and later in his life went into acting, directing and advertising work.

“He loved life. He didn’t want to leave this life,” said Montoya Blackmon. “He’s too young. He enjoyed everything that he did, and he’s done it all. He’s done so much.”

A burial service and ceremony will take place later in the spring at the old Indian cemetery in Seama, New Mexico. It’s the site of the Laguna Indian village, on tribal land. Montoya is with the tribal group, Lagunas.

“It’s what we call home,” said Montoya Blackmon. “It’s home for us.”

Montoya Blackmon said a cousin of hers, Jennifer Montoya, “told me to tell (Kevin) the spirits say it is OK for him to come home.”

A celebration of life for Kevin Montoya is Saturday, March 14 at Lafayette-Orinda Presbyterian Church in Lafayette at 2 p.m.

The UC Berkeley band will play. The celebration of life will continue at The Cooperage in Lafayette at 4:30 p.m.

Vintage grad Deven Boldway was recently drafted into the North American Hockey League, a junior developmental league that he hopes will help him land a college scholarship.

RENO, Nev. — What could you accomplish in 37 hours?

The Athletics' ninth straight win was far overshadowed by what erupted in the seventh inning at the Coliseum.

Kevin Montoya, left, poses at his Theta Delta Chi fraternity at UC Berkeley with former Cal football head coach Sonny Dykes in April 2013. Dykes was at the Golden Bears' helm through the 2016 season.

Kevin Montoya poses for a selfie with his son, Robert Montoya, at San Francisco's Candlestick Park, where Kevin worked with his father and other family members  as a vendor at 49ers and Giants games.

Kevin Montoya and his sister, Melanie Montoya Blackmon of Napa, pose with their nephew, Max Montoya, behind their grandmother’s house on the reservation in Seama, New Mexico.

Kevin Montoya, left, hams it up with Vintage High football teammates during Big Game week in 1986.