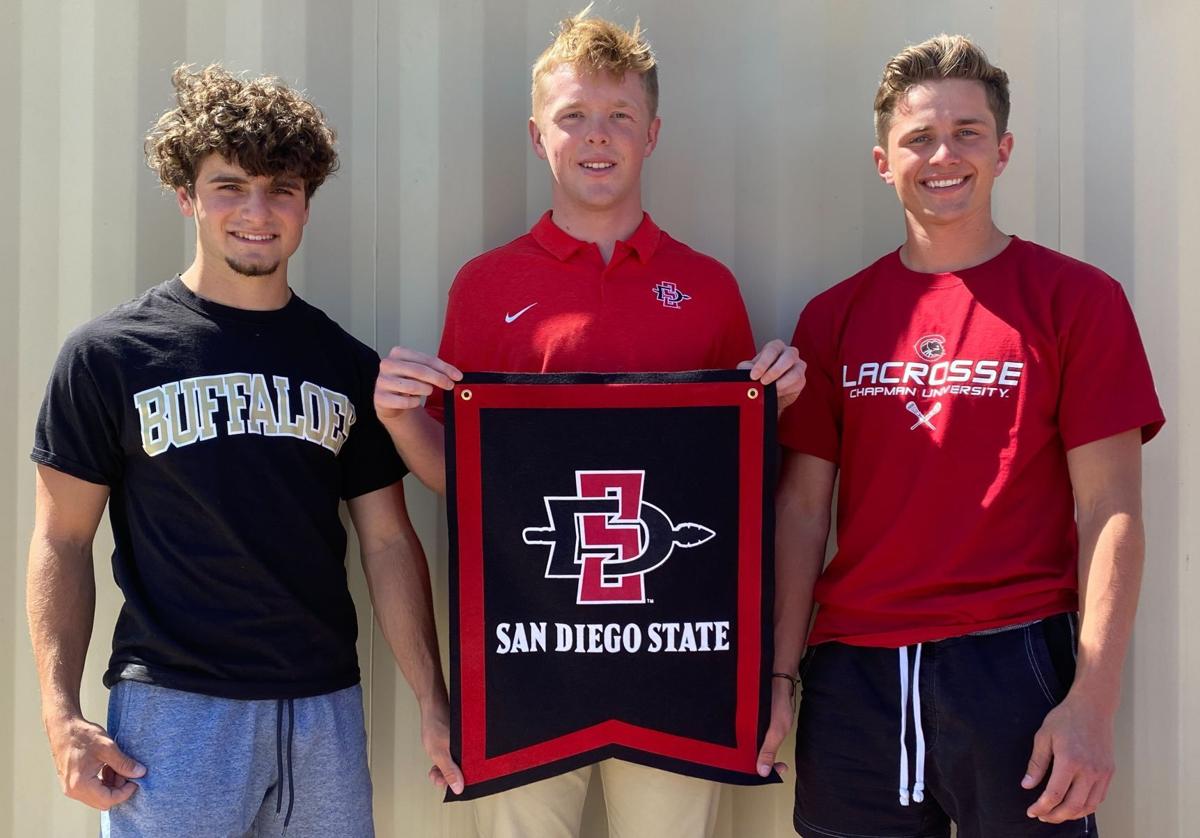 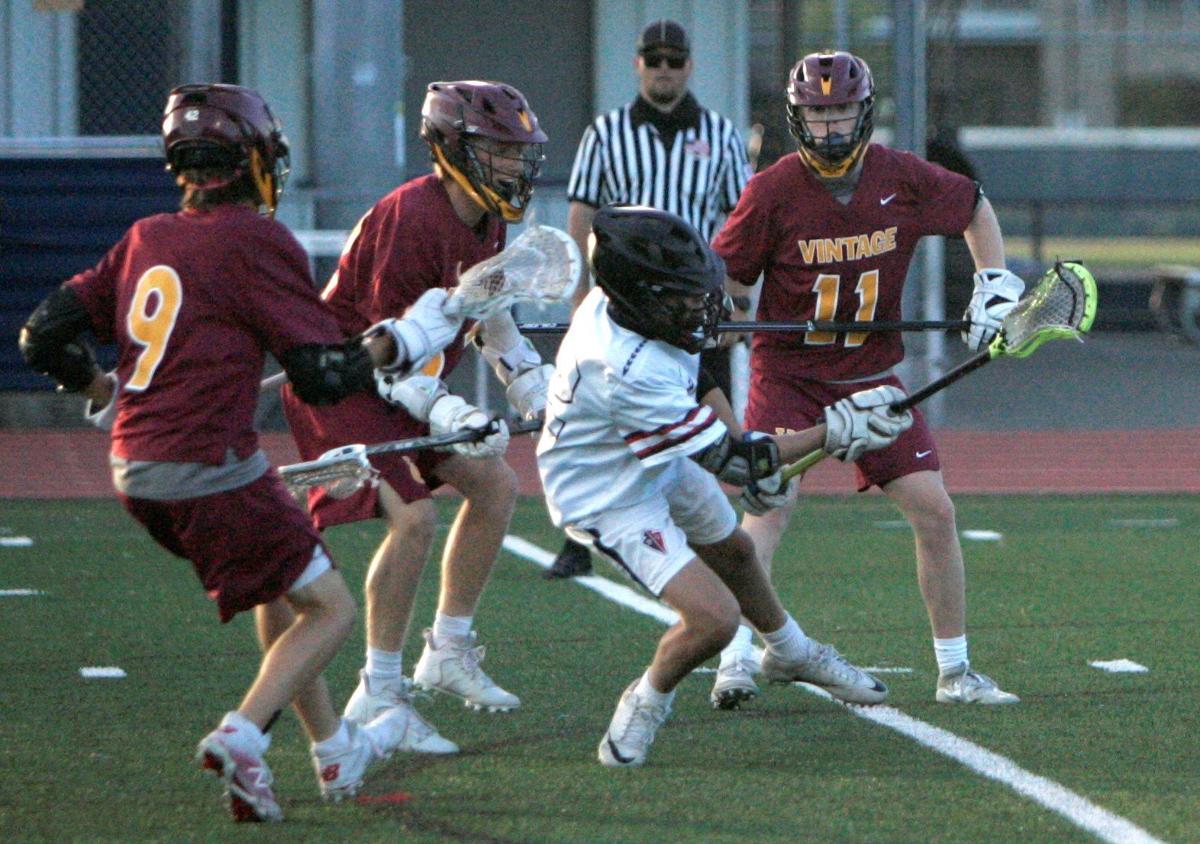 Vintage senior Ryan Mooney (11) keeps an eye on a Justin-Siena ball carrier during a game this season.

Ryan Mooney finally made the headlines, and he’s OK if it doesn’t happen again.

The 2021 Vintage High graduate, after his eighth year of lacrosse and second with his high school’s new program, recently signed a letter of commitment to continue his career with San Diego State University’s high-level club team.

As a defensive player carrying an extra-long stick, Mooney is more about keeping opponents from making headlines than making them himself.

“When you play defense you’re never in the headlines because you’re not scoring goals. You’re in the background, but I like it that way,” he said. “I can do my thing without all the distractions, so it’s nice.

“I’ve been playing club for a really long time with that goal in mind, of potentially playing in college. Now I have the opportunity to do that, and I’m super excited about that. I know they have an excellent coach there. I’m super excited.”

The Aztecs must be pretty excited to have a player like Mooney, not only for his brains — he posted a 4.28 GPA in the first semester this school year — but also his brawn on the field.

“I’ve had the pleasure of coaching these guys for three years,” he said. “They never give up and they’re always tenacious. Mooney was an unbelievable enforcer. He’d get after guys and make them cry.”

Mooney also played a defensive role for the Vintage boys water polo program, helping the Crushers win their fourth league title under head coach Mackenzie Anderson as a sophomore in the fall of 2018.

“I was definitely thinking about playing football in the beginning, but I started water polo in the eighth grade and I fell in love with that,” he said. “Water polo’s more about doing everything, whereas in lacrosse your position is more specific. It’s a little different, but I like it.”

Mooney, one of four team captains for the Crushers this year, started playing lacrosse when he was in the fifth grade.

“I quit baseball because I wasn’t enjoying it and I joined (the Napa Force) and it’s been my life ever since, pretty much,” he said. “Baseball, I don’t know, it was a little too slow-paced for me. I like a lot of action, a lot of movement and stuff, so lacrosse was the right sport for me. I try to be as aggressive as possible so I can cause turnovers for our team and get the ball back to our offense.”

His twin sister, Rose, has been a standout tennis player for the Crushers, and their sister Nora played lacrosse for Justin-Siena before graduating in 2016.

“I want to thank my sisters for being here and my family for bringing me to practices,” Mooney said during the June 11 ceremony at the Vintage track. “They’ve put in as much time as I have, pretty much, so I could do something I love and wanted to do in the future. I want to thank my coaches, especially these last two years in high school. It’s been so much fun.

“We had a lot of beginners and since it’s such a new program, you don’t want to alienate the new guys and give them no field time at all because they’re not going to enjoy the sport if they don’t get to play it. So it was good that our coaches got everyone playing time and got to see the field. It just motivates people to work harder so they earn their spots on the field when they’re sophomores, juniors and seniors.”

The son of Tim and Barbara Mooney will play in the Men’s College Lacrosse Association, against schools from California, Nevada and Arizona, and the Southwestern Lacrosse Conference, one of the top conferences of the MCLA.

Vintage Athletic Director Cam Neal said his father and uncle played basketball for San Diego State, which now has about 35,000 students. Neal also noted the school was founded 123 years to the day before sports were shut down because of the COVID-19 pandemic, Friday the 13th, March 2020.

“We’re really proud of Ryan and all his accomplishments,” Nora Mooney said. “He’s worked really hard over the past four years and he’s always stayed really dedicated to the sport of lacrosse. Even when he’s not playing lacrosse, he’s home on the weekends watching college lacrosse.”

Note: Umutyan and Waters will also be featured in the Register this week.

Countries that have never won an Olympic medal

The 24-year-old American closed with a bogey-free, 4-under 66 Sunday for a two-shot victory over Jordan Spieth to follow up his victory at last year's PGA Championship on debut, just 11 months ago.

The Milwaukee Bucks beat the Phoenix Suns in their first NBA championship since 1971. See the highlights in photos and video.

Napa Valley Youth Baseball: NVBC's 15U team goes 4-0 against 16U foes at tourney

Vintage senior Ryan Mooney (11) keeps an eye on a Justin-Siena ball carrier during a game this season.