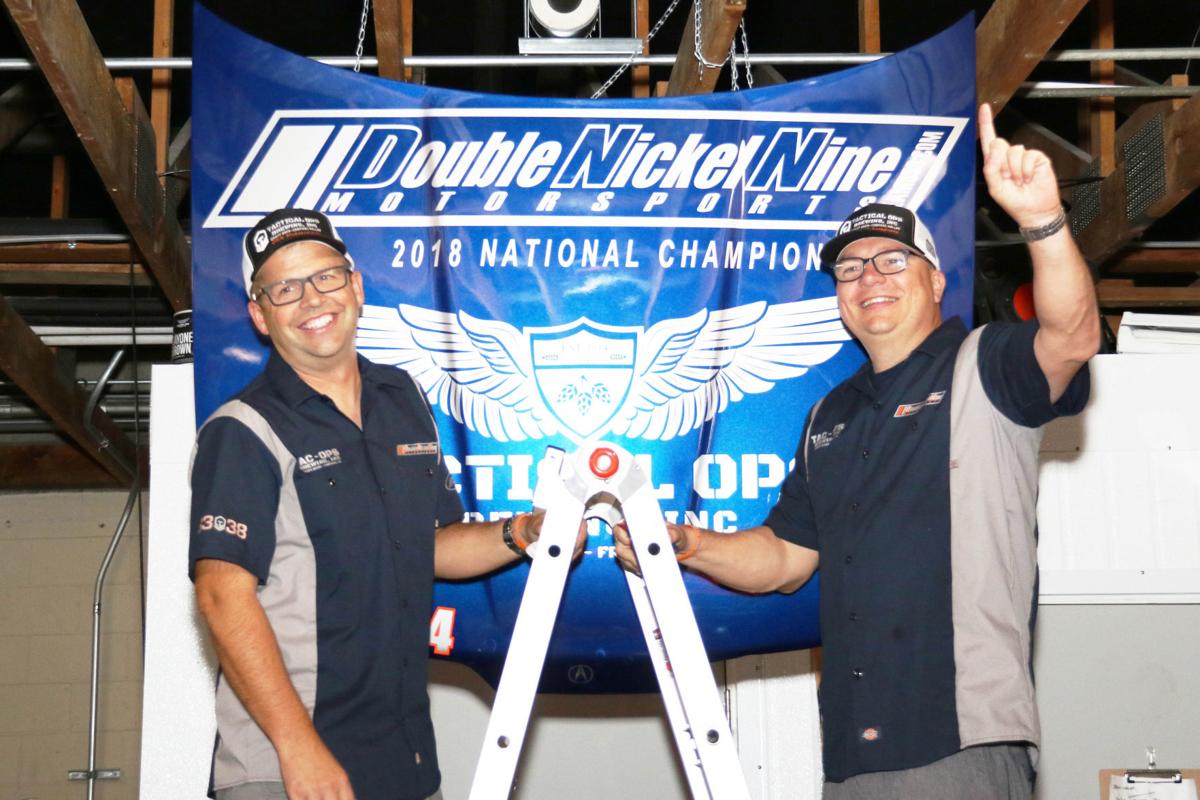 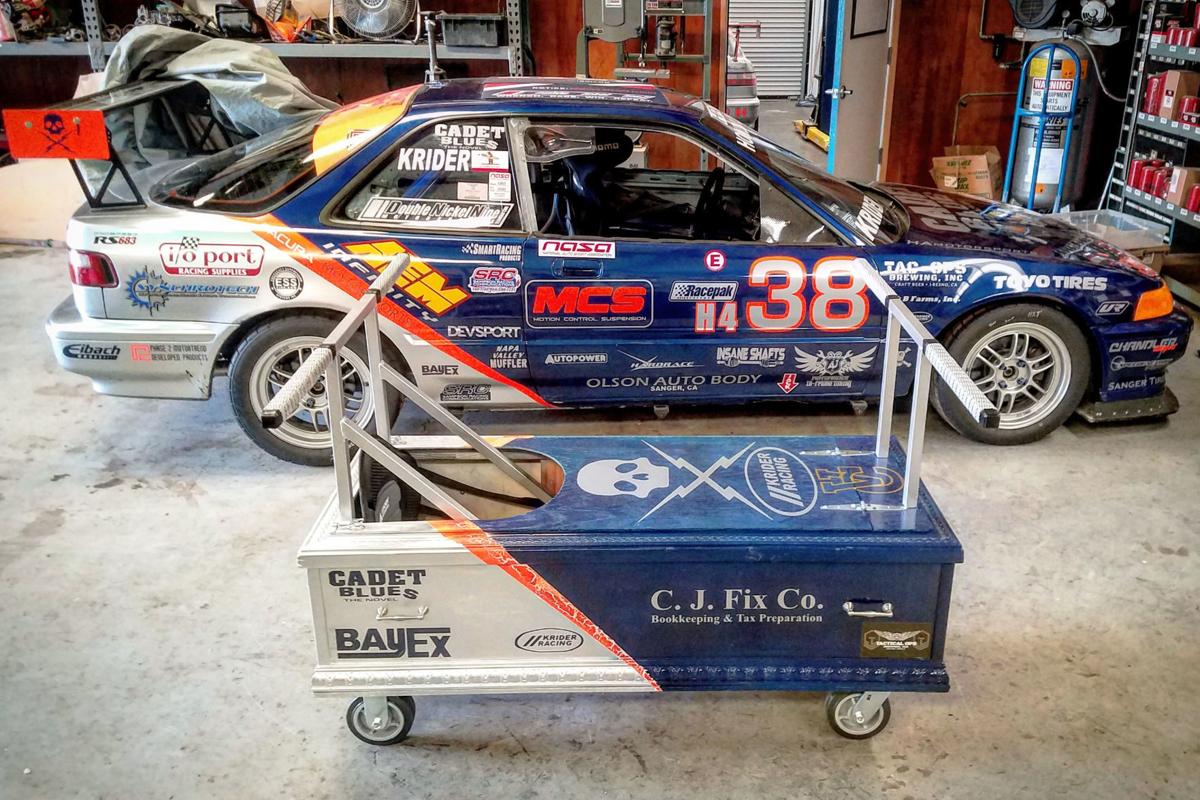 The new Krider Racing coffin represents the Double Nickel Nine Motorsports National Championship No. 38 Acura Integra. The team strapped orange and blue smoke bombs to the back of the coffin to go off as kids ran it down the street. 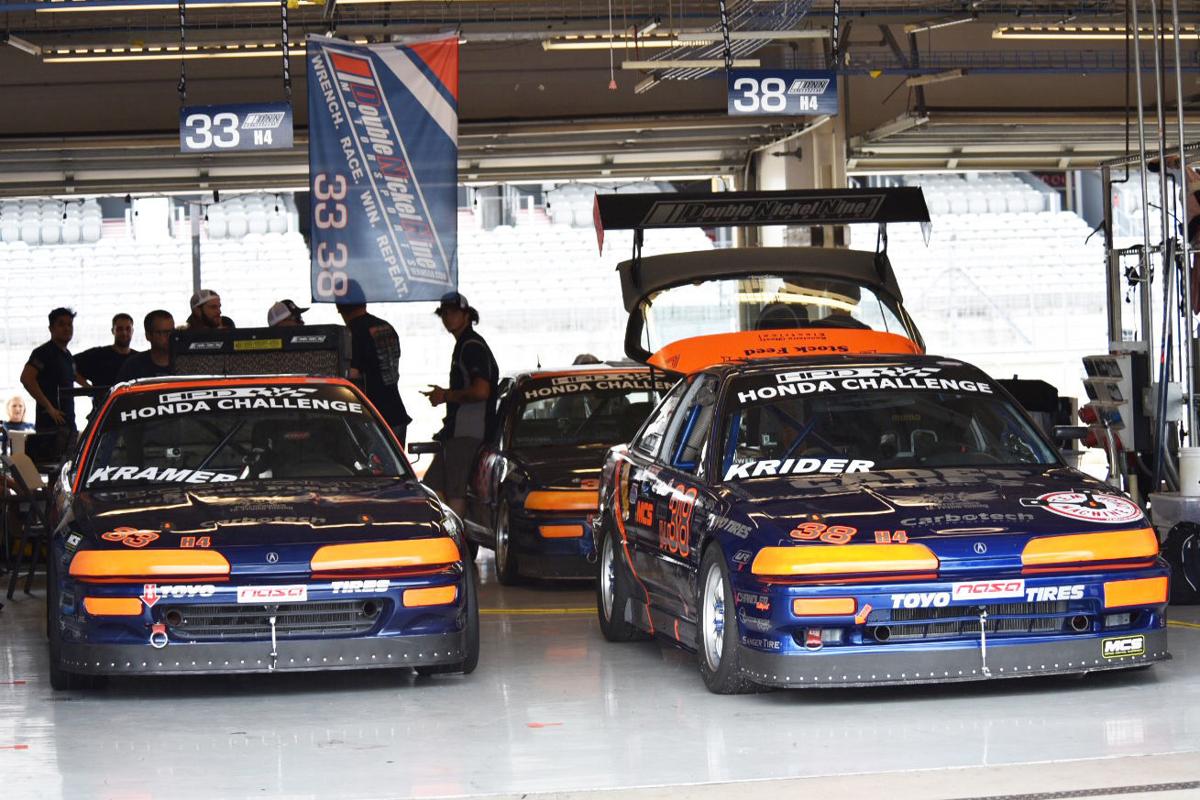 Double Nickel Nine Motorsports' three meticulously clean cars are ready for racing at the Circuit of the Americas track in Austin, Texas.

After winning the Honda Challenge National Championship at the Circuit of Americas in Austin, Texas in September, Napa’s Rob Krider added another victory to his 2018 season: the National Auto Sport Association SoCal Regional Championship.

“My goal was to be a national champion in 2018, but I’ll take regional championship this year, too, without any complaining,” said the Double Nickel Nine Motorsports driver.

The two championships both involved road racing Acura Integras in the Honda Challenge class, but they are each very different. For the national championship, the best in the country battled it out in one winner-take-all race. The regional championship was a season-long, 10-race, multiple-track series where consistency and good car preparation made the difference.

Krider said the regional championship was a group effort that couldn’t have been accomplished without the resources of DNN Motorsports and his teammate and co-driver, Keith Kramer.

“The way we won this championship was solid teamwork and lots and lots of hours in the shop getting the DNN cars perfect before every race,” Krider said.

Every race mattered. With points being accumulated at each event, finishing strong consistently made all the difference. In fact, Krider thought they may have lost the championship at the first race of the season.

“In the rain at Willow Springs back in March, I made a crazy three-car sliding pass in the last corner to get on the podium, and then somehow lost a drag race to the checkered flag by 0.013 seconds,” he recalled. “I had to settle for fourth place instead of third and the difference may have only been 13 thousandths of a second on track, but it was five whole championship points.”

Krider spent the entire season watching the points closely, wondering if the regional championship may come down to those crucial five points. He spent that time worrying for no reason, however, as he and Kramer won the championship in October solidly by 45 points. Those points were earned by Krider and Keith finishing no worse than first or second place the rest of the season.

“That’s how championships are won,” said proud father Jim Krider. “They collected more trophies than they know what to do with this season, and now they will pick up another one with the regional championship.”

The championship bookends a storybook season for Rob Krider, who defended his national title for the third year in the row in Texas after leading the race from flag to flag.

“It truly was a dream season for us,” said team crew chief Stephen Young. “We worked hard, the guys drove hard, and now we have the hardware to show for it.”

Even though the Honda Challenge season is over, the team is still busy in the shop. They built a brand new coffin for the Napa Valley Coffin Races and came to help local children race the coffin down the street at the Oxboo Festival in coordination with Napa Parks and Rec.

“We love the coffin races,” Rob Krider said. “It’s our chance to give back to the same community that has supported us so much.”

How did the team do? Krider Racing’s coffin took first place while being pushed by the Napa High School track and field team. The Krider Racing Graveyard Division coffin racing team is on a four-year win streak.

When not building coffins or winning championships, Rob Krider has been busy as the official test driver for the show Horsepower Wars: Pony Wars. The show puts a new Mustang against a new Camaro and Rob hustles the cars around different race tracks as the cars are worked through different stages of modifications to determine the ultimate winner.

“It’s a lot of fun,” Rob Krider said. “I’ve been sworn to secrecy which car wins the final event. I know Mustang fans and Camaro fans have their obvious favorites, but they will have to wait until the end of November to see who the winner is.”

The final episode will air at horsepowerwars.com on Nov. 29.

Rob Krider said the Napa City-County Library invited him to part of its Napa Neighbors speaking engagement and that he will speak to the public at 2 p.m. Saturday, Dec. 1 at the library, 580 Coombs St., about winning championships, his racing team and “Cadet Blues,” his novel.

“It is truly an honor to be invited,” he said. “I look forward to talking about the team and how we got to where we are. It should be a good time.”

While iRacing keeps auto racers and fans occupied, IndyCar and the NHRA scramble to save virus-shortened seasons.

The new Krider Racing coffin represents the Double Nickel Nine Motorsports National Championship No. 38 Acura Integra. The team strapped orange and blue smoke bombs to the back of the coffin to go off as kids ran it down the street.

Double Nickel Nine Motorsports' three meticulously clean cars are ready for racing at the Circuit of the Americas track in Austin, Texas.